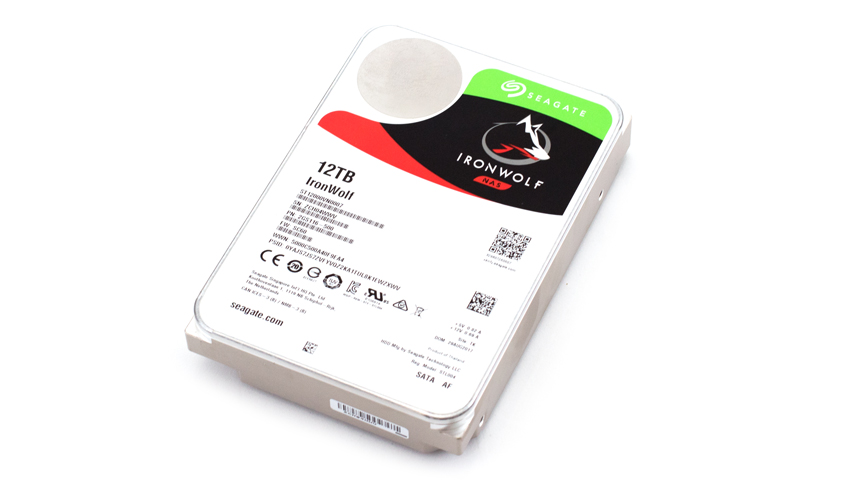 It’s always exciting to see Seagate release a new product on the NAS market, as their previous releases have always been well-received, including the 10TB IronWolf model we reviewed almost a year ago. As such, 12TB IronWolf is the company’s highest capacity, performance-driven NAS HDD to date. Designed to excel in always on, always accessible 24/7 storage servers, the new IronWolf allows businesses to get the most out of their storage devices while being optimized for NAS environments with AgileArray, Seagate’s specific set of hardware, firmware and software features that promote the best possible NAS experience. The IronWolf HDD family is also equipped with dual-plane balancing and RAID optimization in multi-bay environments and offers enterprises with highly efficient and advanced power management capabilities. 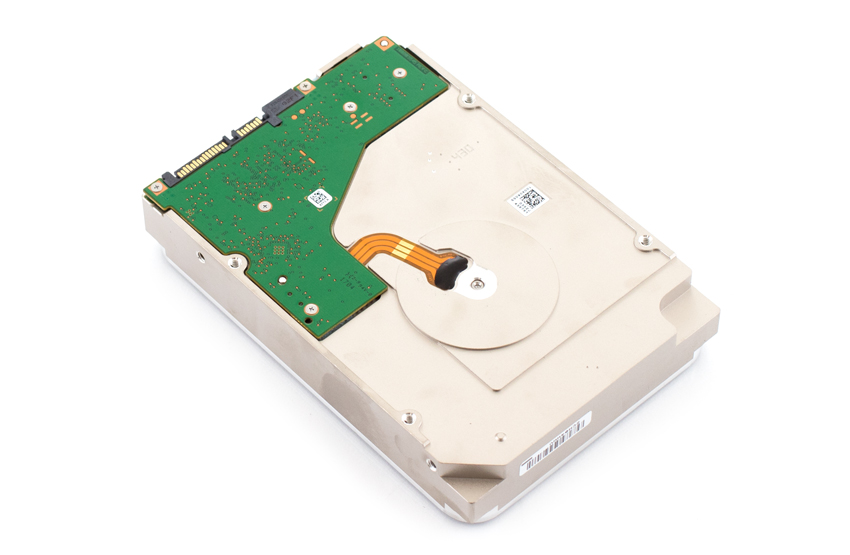 Seagate has designed the IronWolf 12TB to handle a workload rate of 180TB/year with an MTBF rating of 1 million hours. This gives users a peace of mind that the new Seagate drive will be able to handle multiple users continuously uploading and downloading data to the NAS server.

Backed by a 3-year limited warranty, the Seagate IronWolf 12TB can be picked up for under $475.

In the following section of this review, we will test 8 Seagate IronWolf 12TB HDDs performance in both iSCSI and CIFS configurations inside a Netgear 628x (RAID6).

We will be including the following drives as comparables in the NETGEAR 628x configuration:

Our first test measures 4k random performance. Here, the IronWolf topped all other drives when configured in iSCSI with a read score of 652 IOPS; however, its write performance of 612 IOPS fell well short of the Toshiba NAS drive, which scored 964 IOPS in reads (iSCSI).

Results of iSCSI 4k average latency were more or less that same, with the IronWolf just behind its Pro brethren at 392.454ms while reads hit an average of 428.802ms. CIFS connectivity showed similar write performance (433.843ms), though read activity was more than double the latency (820.944ms).

In standard deviation, Seagate IronWolf posted its best read performance when configured in iSCSI with 464.47ms, while recording its best write performance in CIFS with 1,898.31.

Our next test shifts focus from a pure 8k sequential 100% read/write scenario to a mixed 8k 70/30 workload where we show how performance scales in a setting from 2T/2Q up to 16T/16Q. The IronWolf showed impressive performance when configured in iSCSI, posting a range of 439 IOPS to a leading 648 IOPS. The CIFS configuration, however, ranked at the bottom of the pack at the end with a score of just 150 IOPS. 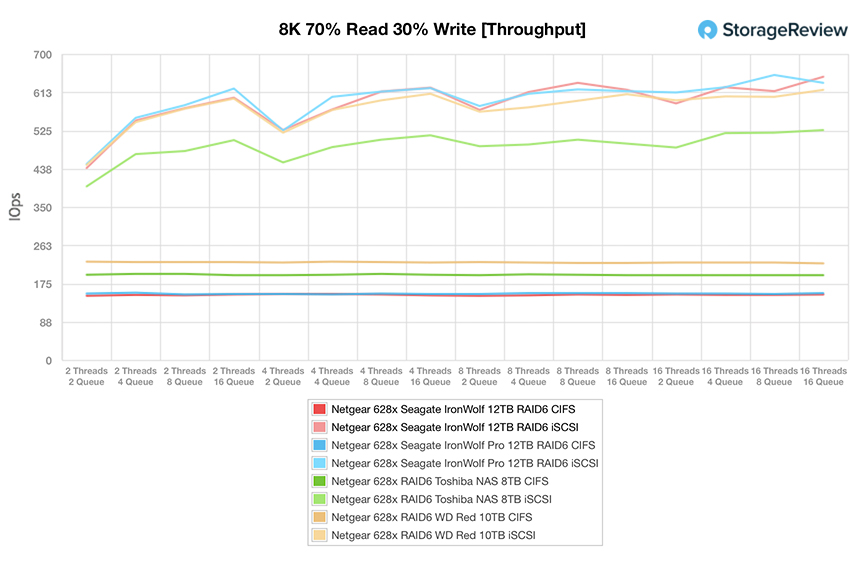 The IronWolf continued it great RAID6 iSCSI performance in average latency, posting a range of 9.07ms through 394.62ms. The next best drive was the Pro version of the Seagate line, posting 403.45ms. 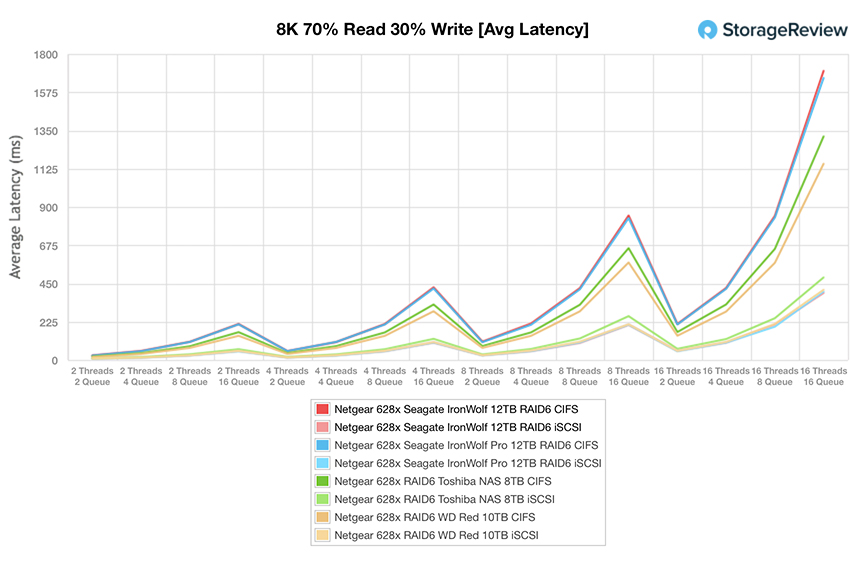 In max latency, the CIFS configuration had the best performance by the end of the test. Though it started at an incredibly high 5,416.26ms, the IronWolf 12TB stabilized by the end with a leading 3,363.57ms. The iSCSI configuration posted a range of 826.95ms to 7,261.25ms. 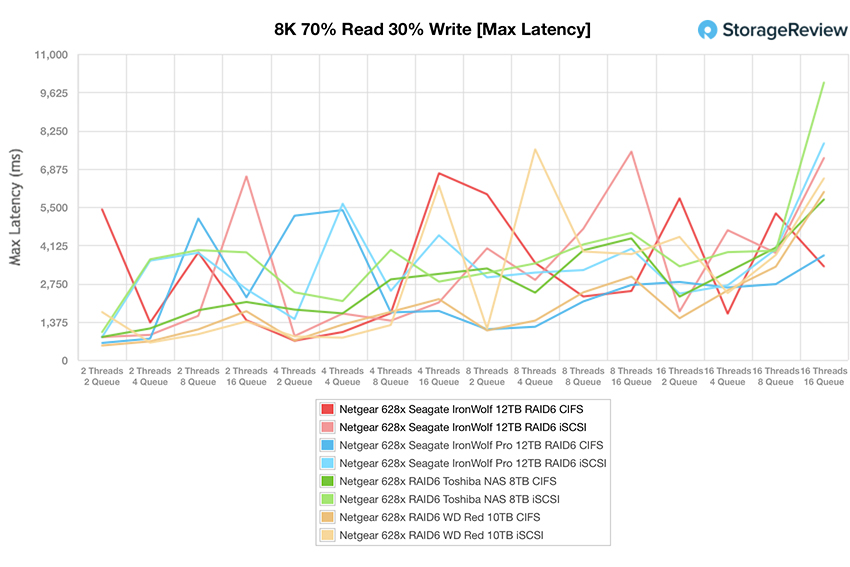 Looking at standard deviation, the IronWolf showed its best performance in the endunder CIFS connectivity with a solid 384.04ms (which was second place, just behind its Pro brethren); however, iSCSI showed much better burst performance with 20.97ms (vs. CIFS’s 61.15ms). 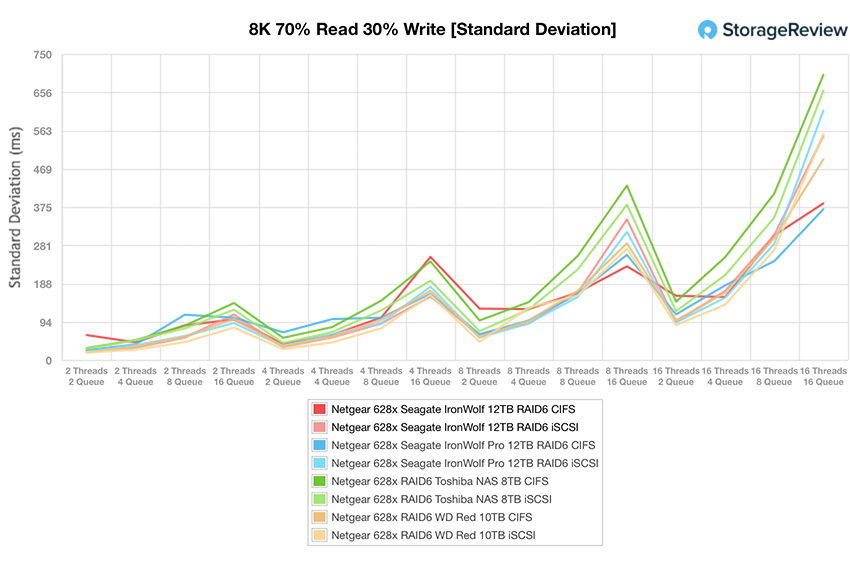 Our last test is the 128k benchmark, which is a large-block sequential test that shows the highest sequential transfer speed. In iSCSI, the IronWolf ranked just behind the Pro line (CIFS) in reads with an impressive 1.908GB/s. The IronWolf had slightly better write activity in CIFS with 1.239GB/s, which was the top performing score as well.

The new Seagate IronWolf 12TB capacity is certainly a great addition to the company’s line of NAS, offering impressive performance while promoting total cost of ownership. With this massive 12TB model, the new IronWolf capacity helps organizations who want the smallest physical footprint per TB as possible. To further its compatibility NAS environments, Seagate has optimized IronWolf line with AgileArray and is built with dual-plane balancing and RAID optimization in multi-bay environments. This HDD is also designed to thrive under 24/7 operation, featuring a workload rate of 180TB per year with an MTBF of 1 million hours.

The Seagate IronWolf 12TB is perfect for small offices or home users that want to increase their capacity while maintaining performance they expect from Seagate.