Seagate has updated their 2.5 inch laptop SSHD line with potential for improved performance as well as a slight increase in capacity from 750GB to 1TB. The Seagate 2.5″ SSHD is equipped with a SATA interface and a 5400-RPM spindle speed, is compatible with PC, Mac, and even certain gaming consoles. Like its predecessor, the HDD part of the hybrid drive allows for the extra storage all the while offering performance close to that of an SSD due their use of NAND flash, though Seagate doesn’t offer any quoted performance numbers.

Seagate has updated their 2.5 inch laptop SSHD line with potential for improved performance as well as a slight increase in capacity from 750GB to 1TB. The Seagate 2.5″ SSHD is equipped with a SATA interface and a 5400-RPM spindle speed, is compatible with PC, Mac, and even certain gaming consoles. Like its predecessor, the HDD part of the hybrid drive allows for the extra storage all the while offering performance close to that of an SSD due their use of NAND flash, though Seagate doesn’t offer any quoted performance numbers. 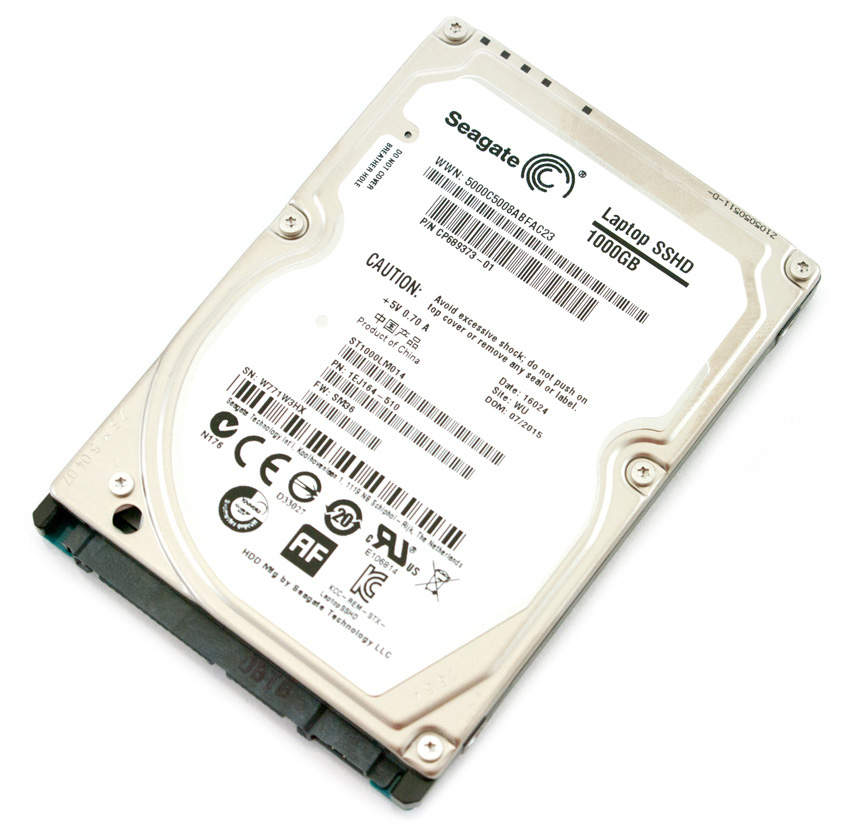 To leverage the solid-state portion of the Seagate Laptop 1TB, the hybrid drive uses the company’s Adaptive Memory technology, which is comprised of advanced algorithms to track data user data patterns. As a result, it prioritizes the most frequently used data (or ‘hot data’) on the solid state part of the drive, so users will see much better overall performance compared to traditional hard disk drives. This is certainly a very attractive option to many media enthusiasts and power users, as it offers the best of both worlds: speed and capacity in a 2.5 inch form factor. Not only does it offer those two perks, the Seagate Laptop SSHD line is also significantly less costly than full SSDs, which can influence a lot of consumers on the cusp who don’t have the budget for an upgrade to a traditional SSD-based device.

Backed by a 3-year warranty, the Seagate Laptop SSHD comes in 500GB and 1TB capacities.

The 1TB Seagate Laptop SSHD is a 2.5″ form factor with a 9.5mm z-height, allowing the hybrid drive to fit in pretty much all mounting conditions where space may be an issue. The label gives users supplemental information that they may need including model, capacity, data of manufacturer and other details. The side of the drive shows the standard SATA interface. 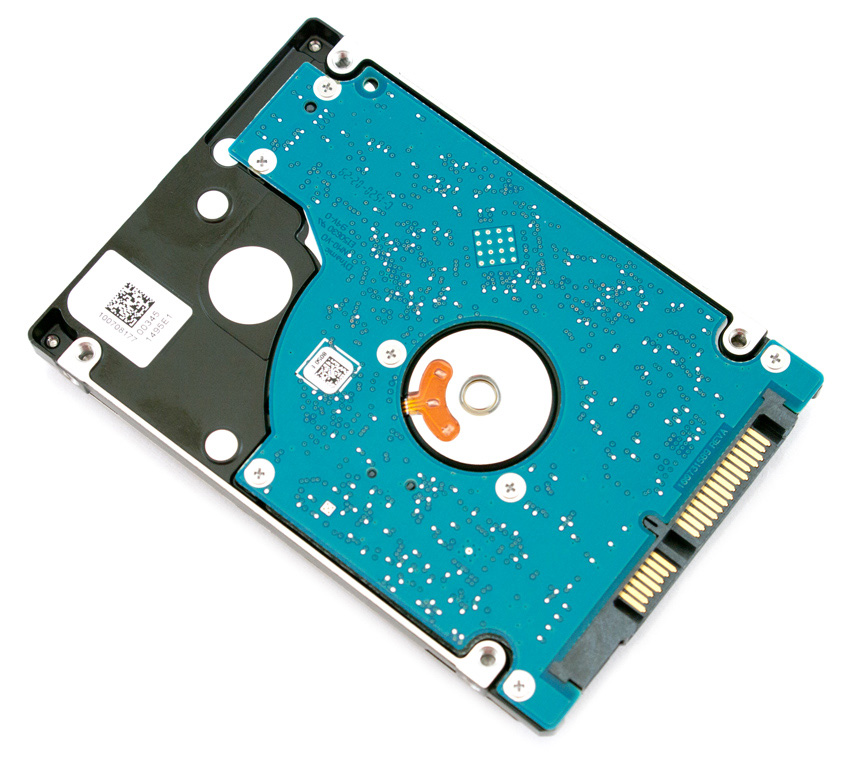 Looking at the underside of the circuit board we see the LSI HDD controller as well as the eASIC SSD cache controller with its respective Toshiba NAND. 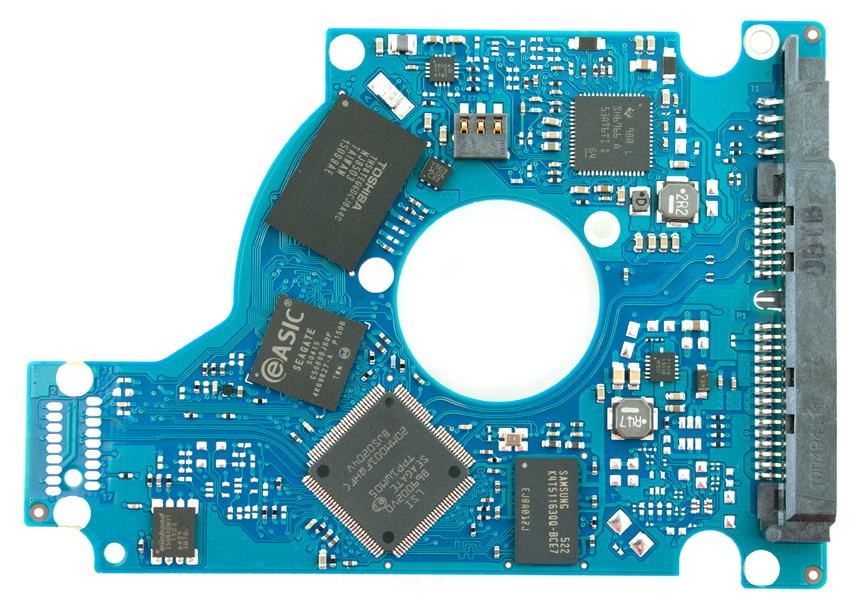 All consumer SSD benchmarks are conducted with the StorageReview HP Z620 Workstation. We compared Seagate Laptop 1TB SSHD with the following:

In our first test, which measures 2MB sequential performance, the Seagate Laptop SSHD 1TB measured just 99.37MB/s read and 99.54MB/s write. These results placed it behind both its 750GB brother and the WD Blue drive, the former which posted reads and writes of 104.90MB/s and 103.67MB/s, respectively.

Moving to 2MB random transfer performance, the Seagate 1TB posted 43.03MB/s read and 52.43MB/s, placing it towards the bottom.

When switching to smaller 4K random transfers, the Seagate 1TB recorded reads and write of 0.197MB/s and 0.986MB/s, respectively. Again, this placed it behind the 750GB Seagate and WD Blue SSHDs on reads, but came out on top with writes.

Looking throughput shows the Seagate 1TB with 50.52 IOPS read, which was last among the comparables; however, it boasted 252.59 IOPS in writes, which was the best performing drive in the write column by a significant margin.

Our 4K write latency benchmark looks at both the average and maximum readings. Here, the Seagate 1TB SSHD had a leading average latency of just 3.954ms while max latency hit 1,417.754ms, which was better than its 750GB brethren. 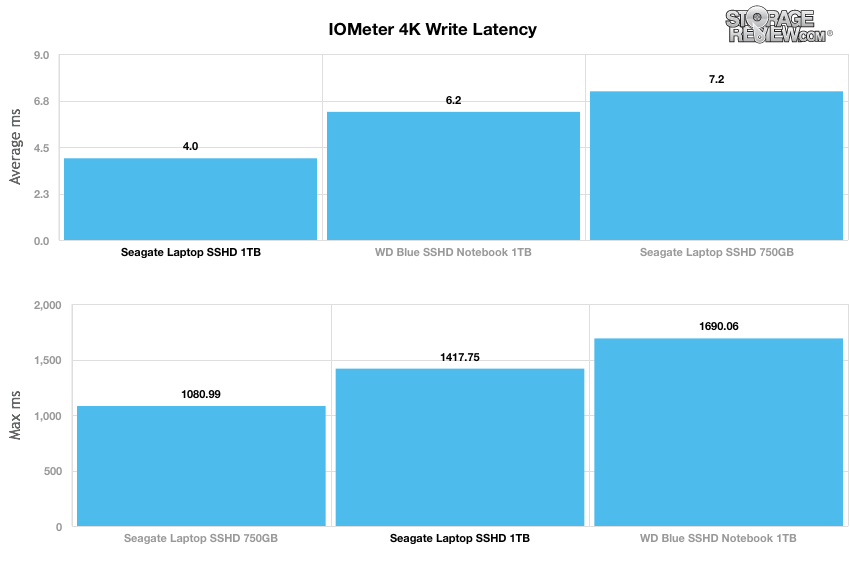 The first is our database profile, which uses a 67% read and 33% write workload mix primarily centered on 8K transfer sizes, shows Seagate 1TB SSHD with an initial IOPS of 58.63 and a terminal IOPS of 106.63. This was just ahead of the WD Blue hybrid drive, which posted a range of 57.77 IOPS to 105.13 IOPS. 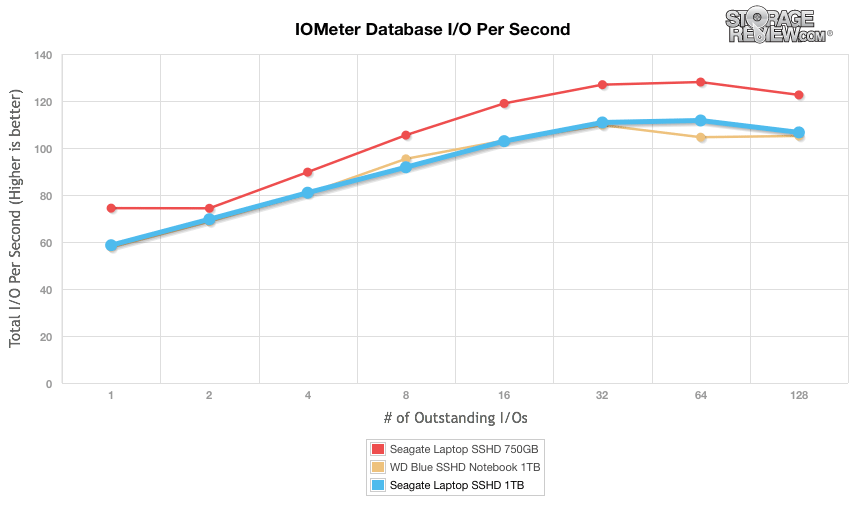 Our web server profile is read-only with a spread of transfer sizes from 512-byte to 512KB. In this scenario, the 1TB Seagate SSHD started off with 51.87 IOPS and ended up with 107.49 IOPS in the terminal, placing it at the bottom of the pack. 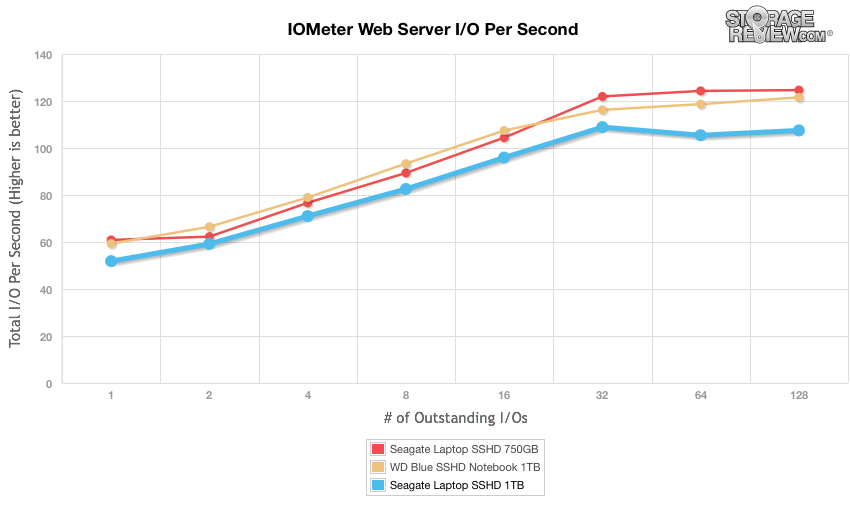 The next profile looks at a file server, with 80% read and 20% write workload spread out over multiple transfer sizes ranging from 512-byte to 64KB. This scenario told a similar story, as the Seagate 1TB SSHD had a range of just 51.90 IOPS to 96.36 IOPS placing it at the bottom among the comparables again. The top performer here was the WD Blue, which delivered a range of 65.62 IOPS to 124.24 IOPS. 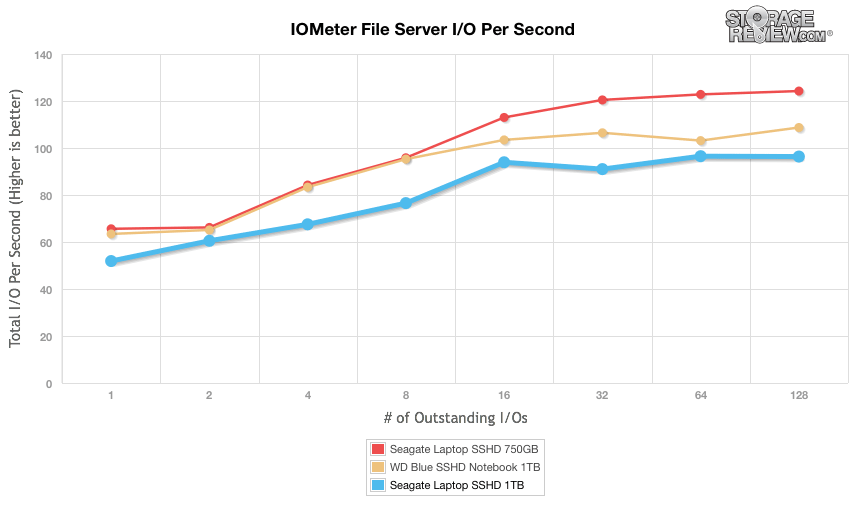 Our last profile looks at workstation activity, which is comprised of a 20% write and 80% read mixture using 8K transfers. Continuing its weaker performance, the 1TB Seagate SSHD posted a range of 60.16 IOPS to 113.66 IOPS. 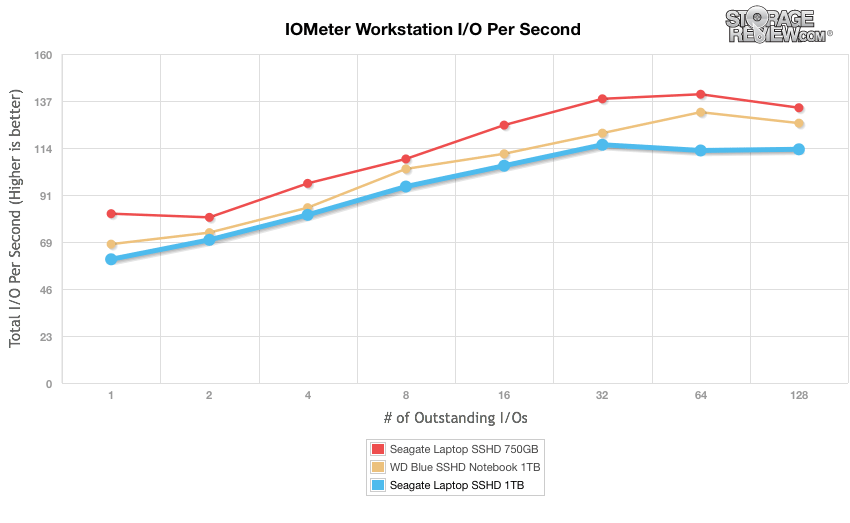 In our HTPC profile, the Seagate 1TB SSHD certainly performed better on the leaderboards, posting 65.91MB/s and 886.23 IOPS while average latency was calculated at 9.017ms, which took top spot in all categories. The WD Blue model was hot on its trail with 869.52 IOPS, 64.69MB/s and 9.114ms in average latency. 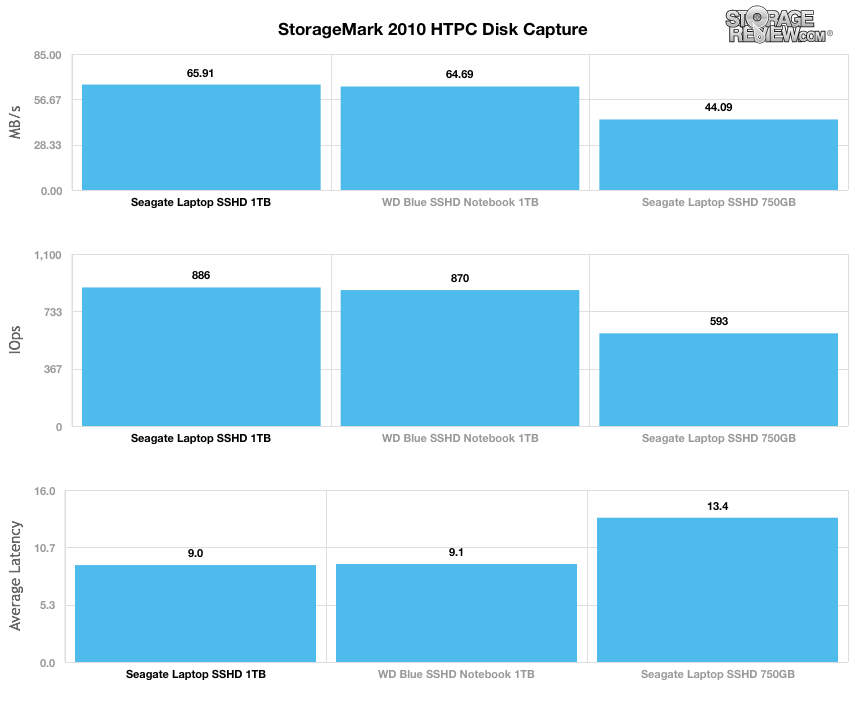 In our read-intensive Gaming trace, the 1TB Seagate SSHD separated itself from the rest of the pack even more with 1,498.08 IOPS, 80.36MB/s, and an average latency of 5.282ms. The other two comparables had virtually identical results and both well behind the 1TB Seagate. 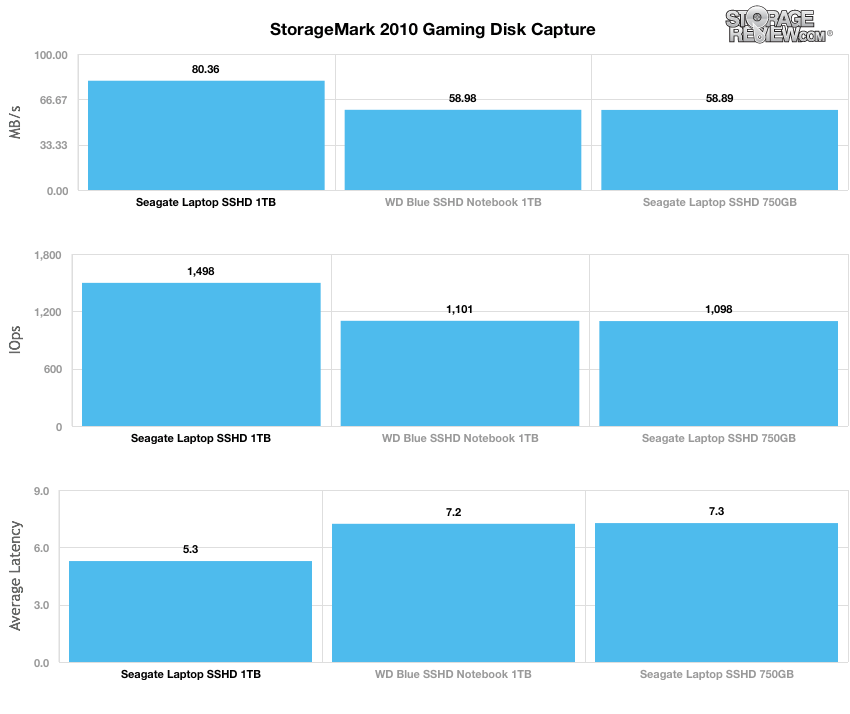 The 1TB Seagate SSHD hybrid drive is designed to provide consumers with an overall boost in performance for those still using a traditional HDD. Though SSHDs are still much slower than typical SSDs, Seagate has certainly equipped its hybrid drive with enough NAND flash technology to see improvements in areas such as boot up and application load times. Many consumers want to see an improvement in everyday computer all the while leveraging the higher HDD storage capacity at a lesser price tag compared to SSDs and the Seagate 1TB SSHD provides this. In addition, because of its 2.5 inch form factor, it can be used in a variety of use cases.

When looking closer at its performance, the 1TB Seagate Laptop offered somewhat expected results. In our synthetic benchmarks which measure performance outside of cache, the drive posted 99.37MB/s read and 99.54MB/s write during the 2MB sequential tests. Both speeds were slower than the previous 750GB Seagate model, which posted reads and writes of 104.90MB/s and 103.67MB/s, respectively. Our 2MB and 4K random workloads told a similar story, placing the 1TB Seagate drive at the bottom of the pack. However, its performance picked up significantly when we put it through our real-world consumer benchmarks which show the advantage of cache technologies, which was highlighted by our gaming trace results. In this scenario, the 1TB Seagate Laptop SSHD boasted an impressive 1,498.08 IOPS, 80.36MB/s, and an average latency of 5.282ms; all of which were well above the other comparables. Though there wasn’t as much disparity between the results of the tested consumer SSHDs, our HTPC workloads showed the 1TB Seagate on top as well.