The Seagate NAS Pro line is a 2, 4, or 6-bay small desktop form factor NAS designed with power users and small to medium businesses with up to 50 employees. The Seagate NAS Pro comes with an Intel dual core 1.7GHz processor, 2GB of DDR3 RAM, and can run up to 30TB of capacity (6x 5TB HDD). The NAS also comes with Seagate’s new operating system, NAS OS 4 and ships with Seagate HDDs. Having all of the software, hardware, and drives made by Seagate enables the system to work together seamlessly. The NAS come preconfigured to save setup time but users can change the configuration through SimpleRAID technology built into the OS.

The Seagate NAS Pro line is a 2, 4, or 6-bay small desktop form factor NAS designed with power users and small to medium businesses with up to 50 employees. The Seagate NAS Pro comes with an Intel dual core 1.7GHz processor, 2GB of DDR3 RAM, and can run up to 30TB of capacity (6x 5TB HDD). The NAS also comes with Seagate’s new operating system, NAS OS 4 and ships with Seagate HDDs. Having all of the software, hardware, and drives made by Seagate enables the system to work together seamlessly. The NAS come preconfigured to save setup time but users can change the configuration through SimpleRAID technology built into the OS. 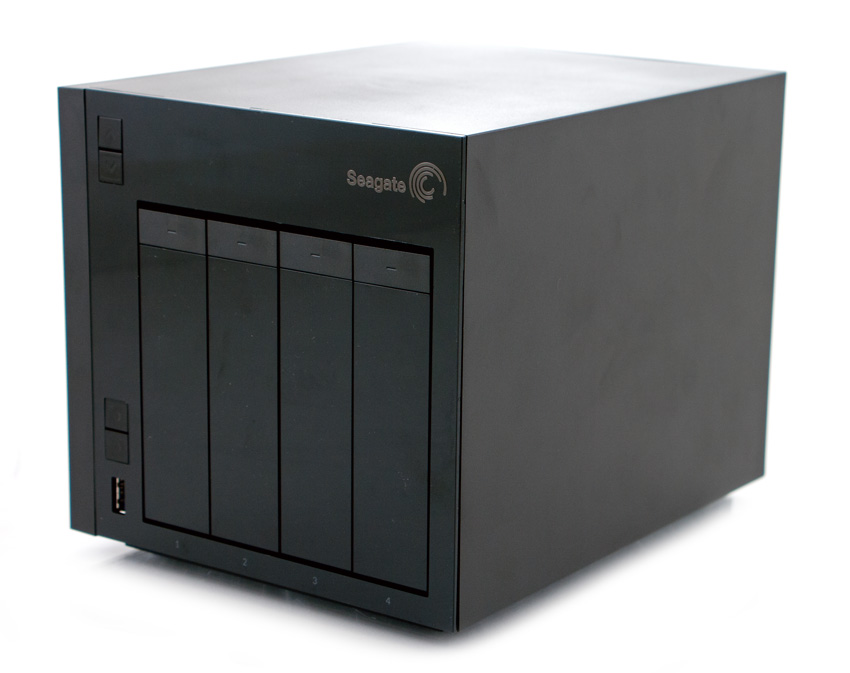 The NAS Pro is aimed at data-intensive businesses such as video and photo editing, home directories and the like. The NAS Pro allows remote access with Seagate Sdrive for PC, Mac, Android, and iOS, giving users access to their files anywhere as long as there is an internet connection. Much like its cousin, the Seagate NAS, the NAS Pro is easy to setup and use. It comes with NAS OS 4 (thanks in large part to LaCie design team that has now fully integrated with Seagate), Seagate OS designed specifically for simple and intuitive NAS use.

The Seagate 4-bay NAS Pro line comes with up to 20TB of capacity, comes with a 3-year limited warranty, and starts at a street price of $560 with no drives.

The Seagate NAS Pro is a small desktop form factor. It looks very similar to the Seagate NAS line the major differences being the LCD screen on the front of the device (for 4- and 6-bay versions) and the up and down buttons in the upper left hand corner of the device for navigating the LCD menu (the LCD menu provides info while booting and powering off the device). Beneath the LCD menu are the four hot-swappable drives that are easy accessed from the front of the device. The power and backup buttons are also on the front on the lower left hand side, with a USB 3.0 port underneath and LED indicator lights above. On the upper right hand is the Seagate branding. 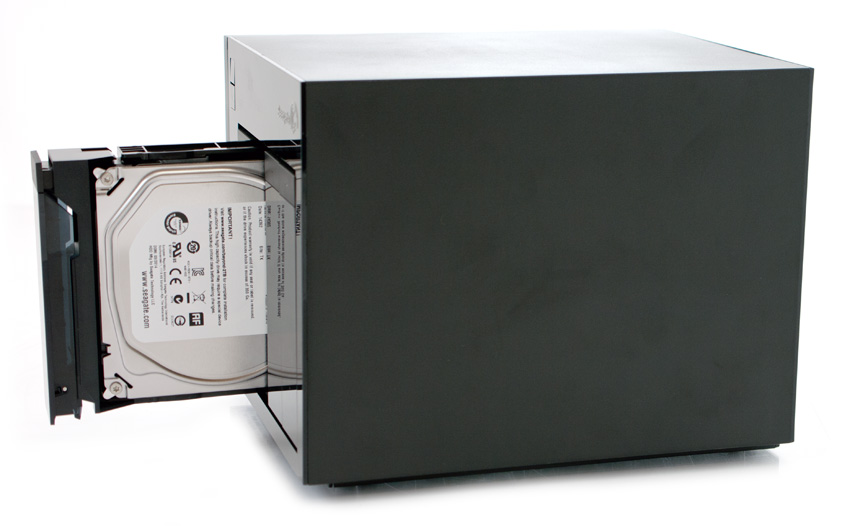 Turning the device around we see that the fan dominates most of the space on the back. To the right of the fan going from top to bottom is a recessed reset button, the second USB 3.0 port, a USB 2.0 port, both network ports, and the power adapter. On the button left hand side is a place for a Kensington lock. 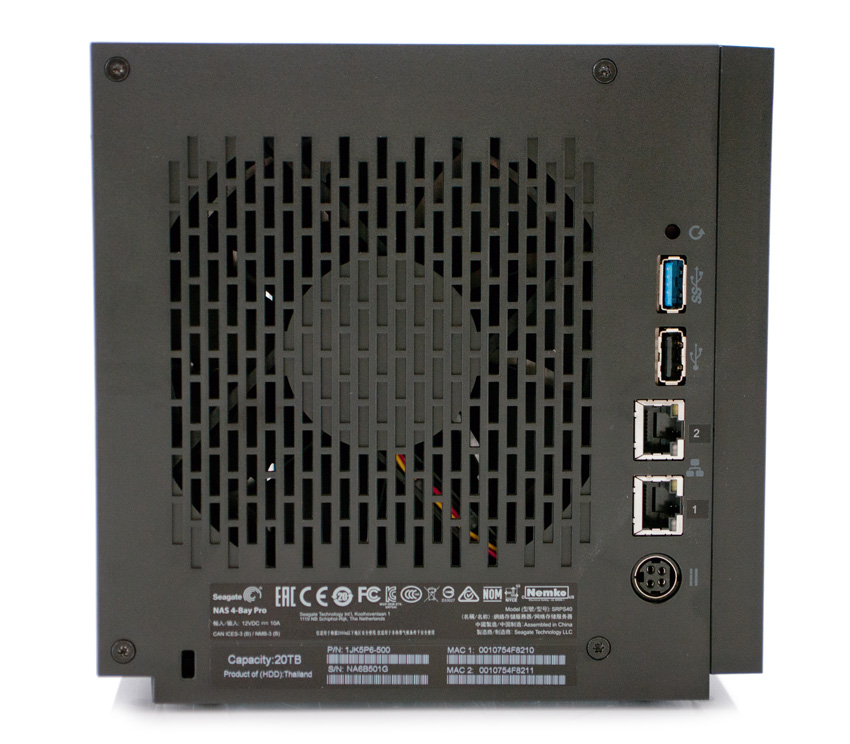 Drive trays for the Seagate NAS are toolless, using a unique side bending mechanism to snap the drives into place. The trays are very well engineered, when swapping drives, having such an easy clip and go design is great. Most other toolless designs still require extra pieces that snap into place.

The Seagate NAS Pro comes preconfigured with the desired capacity making setup simple for most, though a bare version is available. Connect Ethernet cables, power adapter, and press the power button and you are ready to go. Once you’re logged in, you’ll find a redesigned home screen with icons for Device Manager, File Browser, Download Manager, Backup Manager, and App Manager. The home screen also gives you the option to switch between NAS, restart, or put the device to sleep.

Launching Device Manager, users can get an overview of the general operation of the NAS: percentage of disk use for all the drives, health, the percentage of usage for both RAM and CPU, users, shares, and Internet connection. 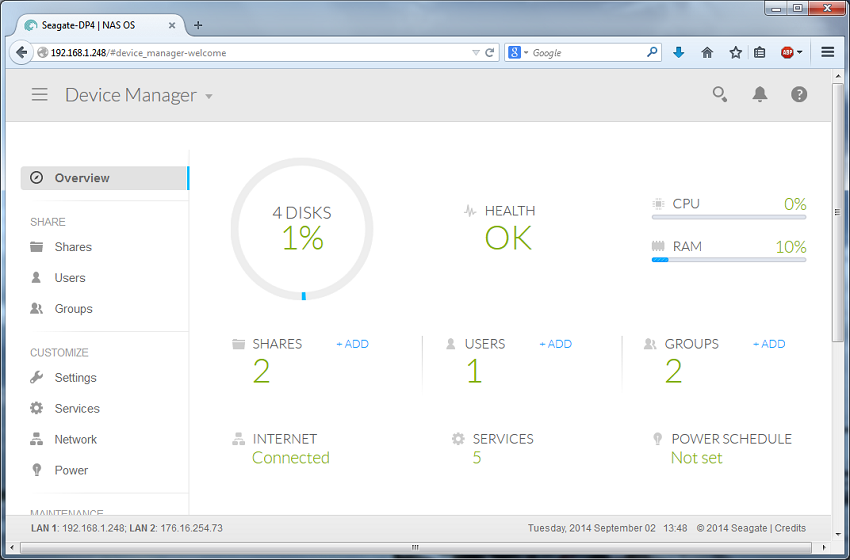 Through Storage Overview users can select the New network volume wizard to quickly set up RAID through SimplyRAID or they can choose to do a custom setup for their specific needs. The custom options appear on the left side of the screen. 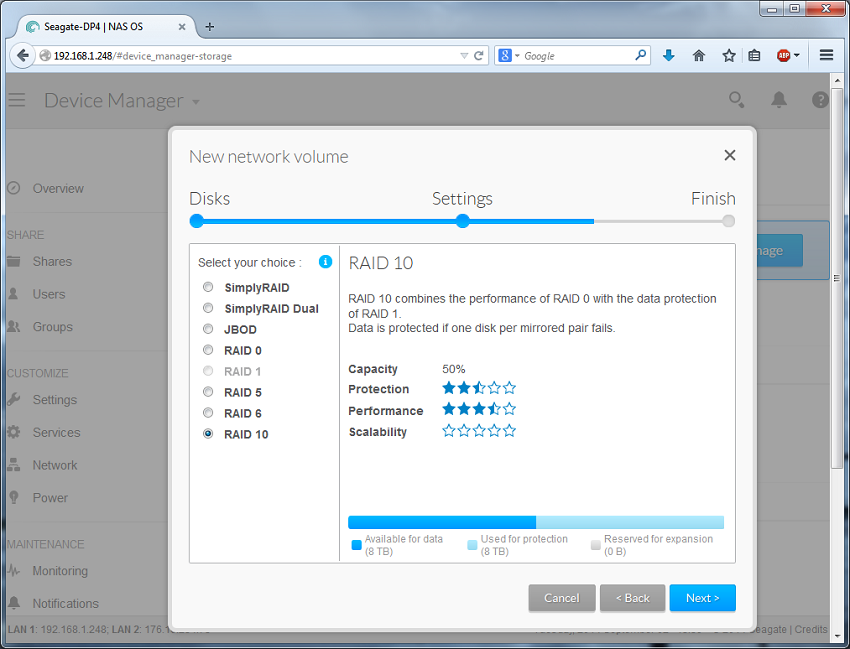 Through the Network tab in Device Manager, users can see their connections, assign a proxy, setup remote access, review and adjust port forwarding, and turn on IPv6 addressing. Users can also check speed and status through the tab. 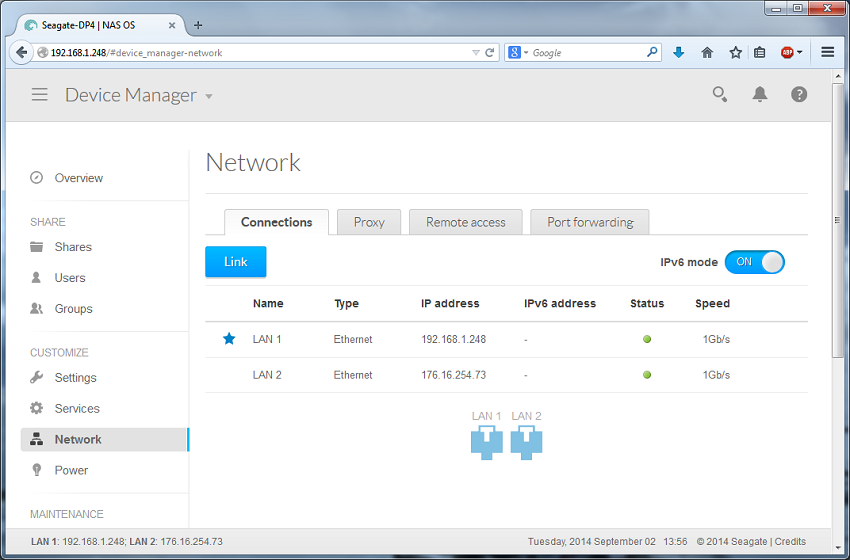 Through the Power tab in Device Manager, users can adjust the drives to spin down when not in use, schedule a power saving mode for times of low/no use, and manage uninterruptable power sources (UPS). 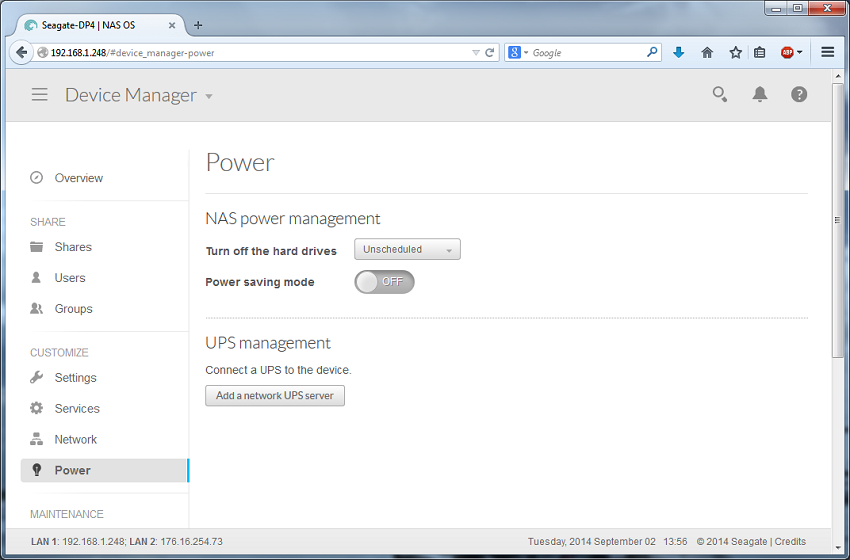 Through the Services tab in Device Manger, administrators can view and manage the available services on the NAS turning off those they don’t need. 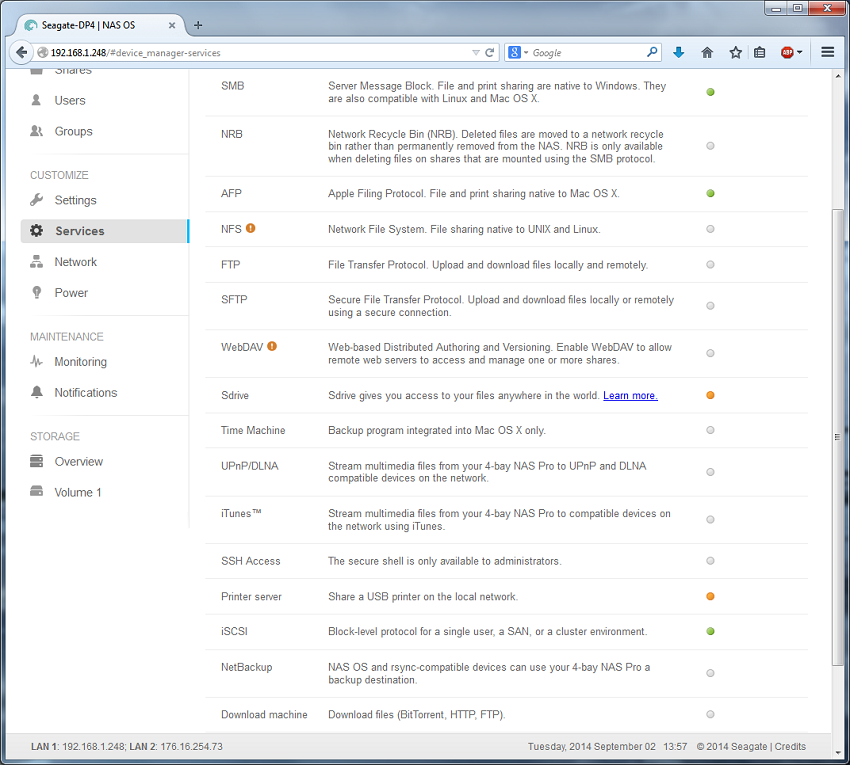 The NAS is divided into Shares (network folders). Through the Shares tab, users can add new Shares, assign access, and adjust service by Share. Adding a new share is done through a wizard where once named the share can be set to private or public, assigned permissions, and located on the NAS. Remote Shares can also be set up through this tab. 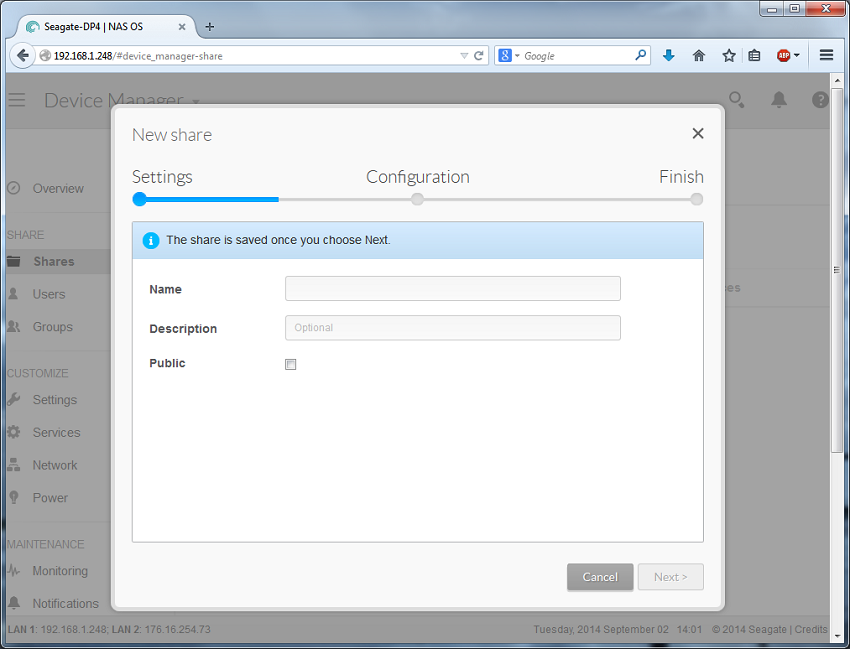 Through Storage Overview, iSCSI can be added as well by creating a new iSCSI target or importing an existing iSCSI target. Once setup, iSCSI settings can be changed through Device Manager, in the Overview tab. In order to fairly evaluate the performance of the Seagate NAS Pro we need an environment that ensures that the NAS is the I/O bottleneck rather than the network. Therefore this review employs a Lenovo ThinkServer RD240 running multiple Windows Server 2012 VMs in an ESXi 5.1 environment connected via a quad-port Intel i350-T4 NIC through a Netgear ProSafe GS752TXS switch.

Our shared storage benchmark process preconditions each NAS into steady-state with the same workload the device will be tested with under a heavy load of 16 threads with an outstanding queue of 16 per thread, and then tested in set intervals in multiple thread/queue depth profiles to show performance under light and heavy usage. Since HDD-based shared storage reaches its rated performance level very quickly, we only graph out the main sections of each test.

In the first of our workloads, we measured a long sample of random 4k performance with 100% write and 100% read activity to get our main results. In this benchmark, the Seagate NAS Pro performed well in write performance coming in second (iSCSI) and third (SMB) but falling short of the top performer, WD MyCloud EX4 SMB at 645 IOPS write. In the read throughput there was no competition, the DS414 iSCSI was well ahead of the rest of the pack at 850 IOPS almost four times higher than the other drives.

Comparing max latency between the three NAS units, we see the Seagate NAS Pro perform in the middle of the pack with read latency and near the bottom of the pack with write latency. Once again the overall top performer was the DS414 iSCSI.

Plotting out our standard deviation in 4k consistency we see similar results to the above. Again the Seagate NAS Pro perform in the middle of the pack with read latency and near the bottom of the pack with write latency. And once again the overall top performer was the DS414 iSCSI.

Compared to the fixed 16 thread, 16 queue max workload we performed in the 100% 4k write test, our mixed workload profiles scale the performance across a wide range of thread/queue combinations. In these tests, we span workload intensity from 2 threads and 2 queue up to 16 threads and 16 queue. In the expanded 8k 70/30 test, The Seagate NAS Pro ran about in the middle to bottom third of the pack, peaking at 292IOPS. 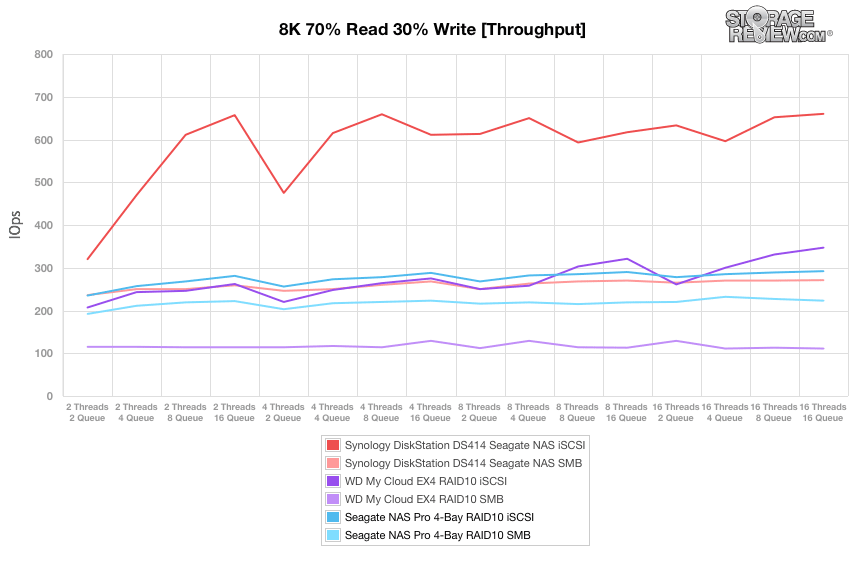 With the 8k 70/30 average response times, here we see similar results to the above with the Seagate NAS Pro running in the middle to lower end and the DS414 iSCSI having the lower latency overall. With max latency, we see the Seagate NAS Pro drop down even further in the pack having some of the highest latency of the group. For the entirety of the thread/queue spectrum, the Seagate NAS Pro ran at the bottom of the pack with some of the highest latency. The last test in our small NAS Synthetic Workload testing is the 128k test, which is a large block sequential test that shows the highest sequential transfer speed. Looking at the 128k performance of 100% write and 100% read activity, we see the Seagate NAS Pro taking the lead for the first time. While it wasn’t much higher than the DS414 SMB, it did edge out the other NAS to take the top spot with a read speed of 231,440 KB/s and a write speed of 222,637 KB/s.

The Seagate NAS Pro line is a desktop form factor NAS aimed at small to medium businesses with up to 50 employees. It comes with a Intel dual core 1.7GHz processor, 2GB DDR3 ram, and can run up to 30TB in capacity. The device runs the new operating system NAS OS 4, which is designed for simplification and ease-of-use. The Seagate NAS ships with the Seagate NAS HDDs, meaning everything from the software, hardware, and drives are all made by Seagate and designed to work together well.

We measured both CIFS/SMB and iSCSI performance in the Seagate NAS Pro and compared it to two other SMB/SOHO NASs in a similar price category, the Synology DS414 and the WD MyCloud EX4. We found random 4K access performance to top at 270 IOPS read and 594 IOPS write and 8K performances topping at 12,935 IOPS read and 11,664 IOPS write. And we found the device to have large-block sequential speeds at 231MB/s read and 223MB/s write. Overall it wasn’t as strong of a performer as the Synology unit, however it did run comparable to the WD unit. While not being the strongest performer, the NAS Pro line—like the Seagate NAS line—is all about ease of use. It would fit well in a small to medium business with no or limited IT infrastructure that just need NAS basics to be successful.

The Seagate NAS Pro line is a NAS that is powerful enough for a small to medium business that needs a fair amount of performance with a device that is easy to use.