The QNAP TS-451 NAS is a high performance NAS for small offices and personal use. It comes with a 2.41GHz dual core Intel Celeron processor, 1GB of DDR3L RAM (expandable up to 8GB), up to 20TB of capacity (5TB HDD x 4), and all kinds of connectivity including two USB 3.0 ports, two USB 2.0 ports, two LAN Gigabit ports, and something a little different for NASs, an HDMI port. The NAS runs QNAP’s latest OS for their NAS line, QTS 4.1. The device supports multiple platforms (Windows, Mac, and Linux/UNIX) and allows cross-platform file sharing and can be remotely accessed from multiple devices. The TS-451 boasts speeds of 224MB/s sequential read and 216MB/s sequential write while posting encryption speeds of 68MB/s both sequential read and write.

The QNAP TS-451 NAS is a high performance NAS for small offices and personal use. It comes with a 2.41GHz dual core Intel Celeron processor, 1GB of DDR3L RAM (expandable up to 8GB), up to 20TB of capacity (5TB HDD x 4), and all kinds of connectivity including two USB 3.0 ports, two USB 2.0 ports, two LAN Gigabit ports, and something a little different for NASs, an HDMI port. The NAS runs QNAP’s latest OS for their NAS line, QTS 4.1. The device supports multiple platforms (Windows, Mac, and Linux/UNIX) and allows cross-platform file sharing and can be remotely accessed from multiple devices. The TS-451 boasts speeds of 224MB/s sequential read and 216MB/s sequential write while posting encryption speeds of 68MB/s both sequential read and write. 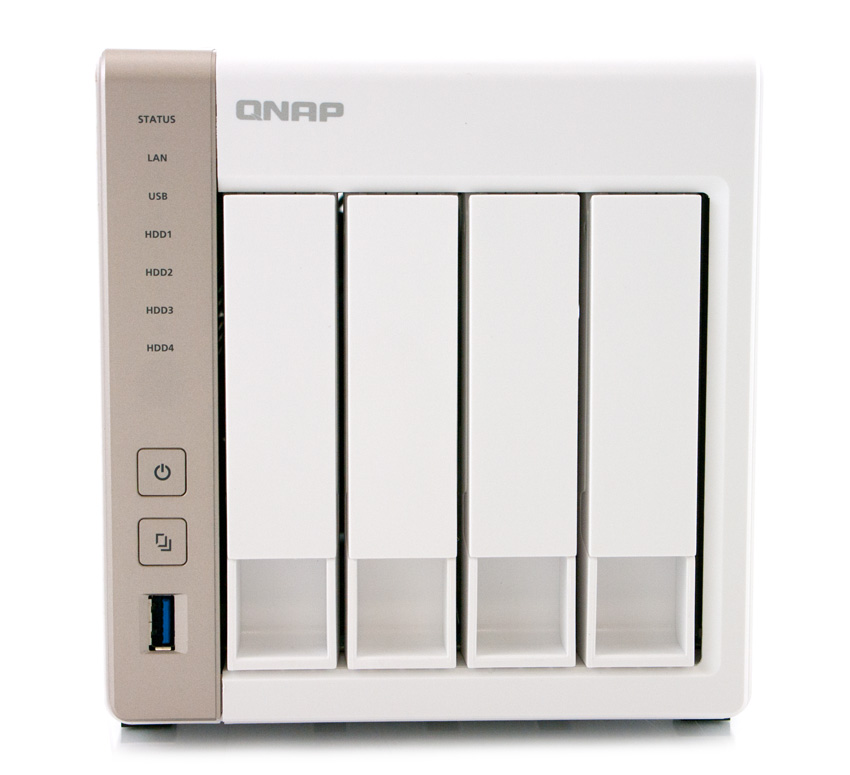 Not only is the QNAP TS-451 NAS aimed at home, small, and even medium-sized offices, it can be beneficial for personal users who either work with digital media (photographers, video editors, musicians) or just for homes with lots of digital media. Home users can use DLNA-compatible devices to stream video and audio files stored on the TS-451. Via the HDMI connection, users can connect the TS-451 to their HDTVs and enjoy high quality multimedia content. Users can create a personal cloud and sync all of their computers, smartphones, and tablets to the TS-451 allowing access to all of your digital media anytime, anyplace.

The QNAP TS-451 NAS has a tower form factor and a white plastic chassis cover. On the front of the device there are the four drive bays with plastic trays that require screws for drive mounting. Above the bays is the QNAP branding. To the left hand side, starting at the top, there are the seven indicator lights for status, LAN, USB, and each drive. Beneath the lights are the power and backup button. Beneath the buttons is one of the USB 3.0 ports. 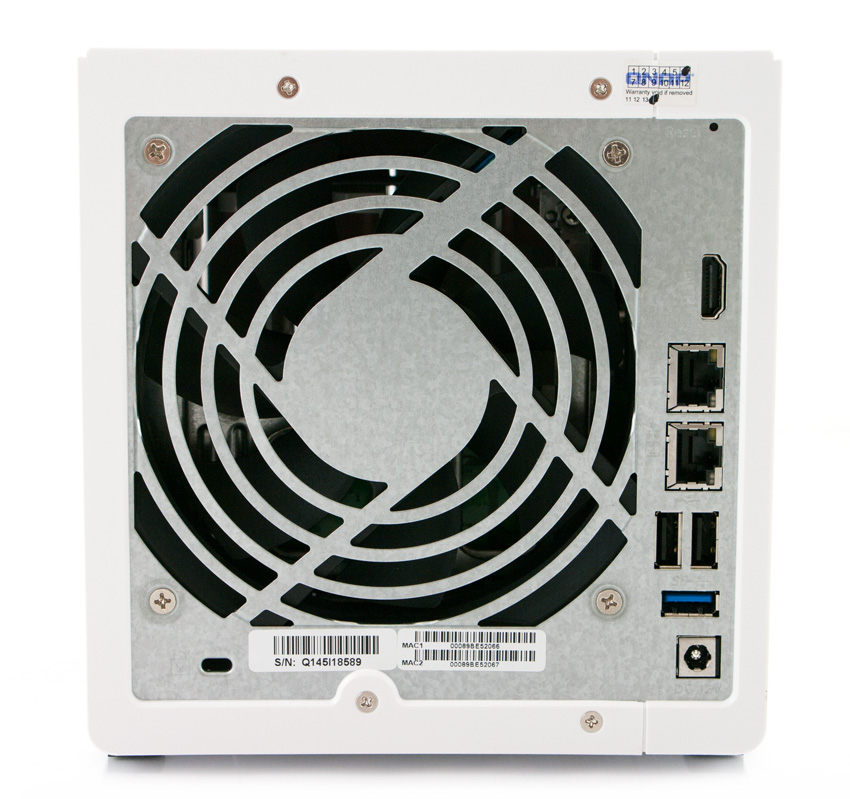 Looking at the NAS from the front, the right side of the device is blank and the left side has small ventilation near the front. The fan dominates the rear of the device. Beneath the fan is a place for a Kensington lock. To the right of the fan starting at the top is reset button. Beneath the reset button is an HDMI port, two LAN ports, two USB 2.0 ports, one USB 3.0 port, and the power inlet.

The QNAP TS-451 NAS uses QTS 4.1 as its OS, an intuitive, multi-window operating system. Simple to navigate, QTS allows multi-tasking (users can start a new project before another projects finishes). It provides a desktop environment within a web browser. The NAS can be setup up in multiple ways: through QNAP’s cloud service, through the QFinder utility, or the NAS can be setup by access the unit over the web browser through its DCHP IP.

After setting up the NAS you’ll be brought to the main screen with a variety of icons for controlling things like settings, media, backupstation, and Qsync. 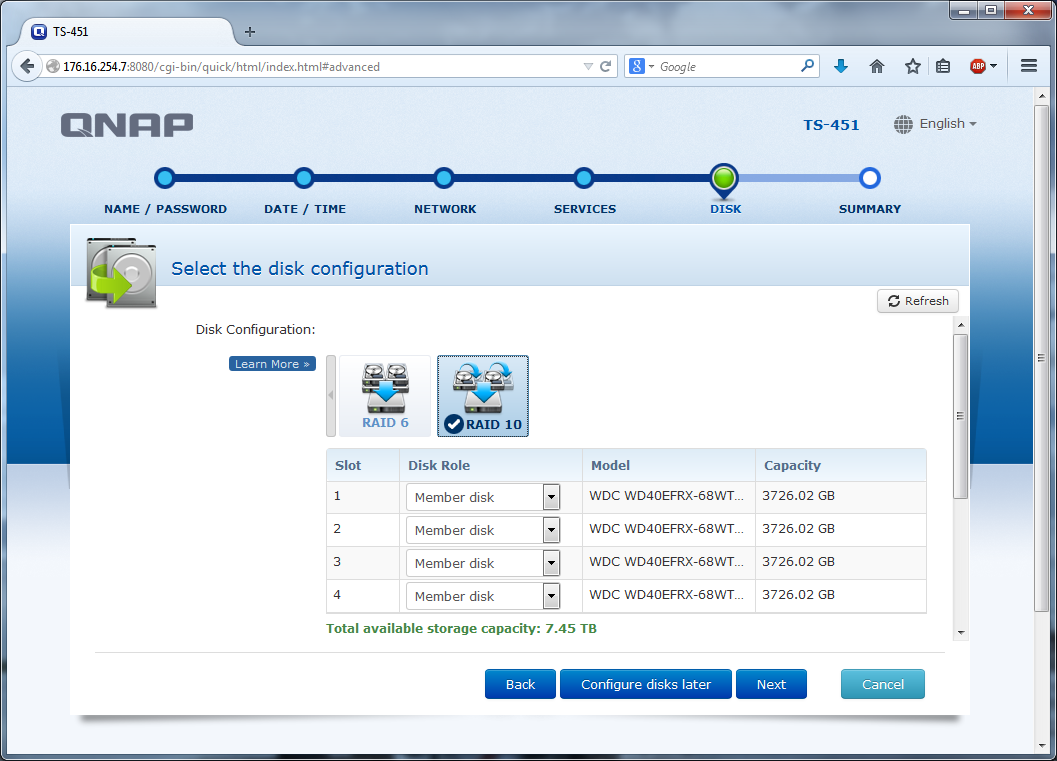 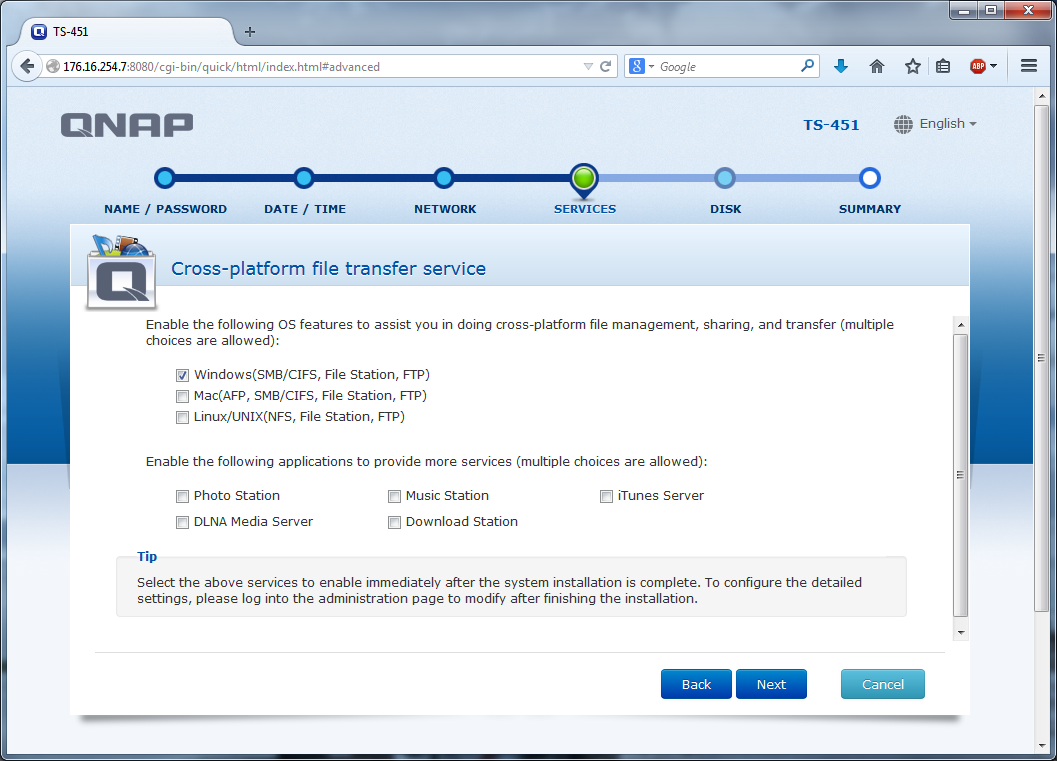 Overall the interface is very friendly and intuitive to use without much effort.

In order to fairly evaluate the performance of the QNAP TS-451 NAS we need an environment that ensures that the NAS is the I/O bottleneck rather than the network. Therefore this review employs a Lenovo ThinkServer RD240 running multiple Windows Server 2012 VMs in an ESXi 5.1 environment connected via a quad-port Intel i350-T4 NIC through a Netgear ProSafe GS752TXS switch.

Our shared storage benchmark process preconditions each NAS/SAN into steady-state with the same workload the device will be tested with under a heavy load of 16 threads with an outstanding queue of 16 per thread, and then tested in set intervals in multiple thread/queue depth profiles to show performance under light and heavy usage. Since HDD-based shared storage reaches its rated performance level very quickly, we only graph out the main sections of each test.

In the first of our enterprise workloads, we measured a long sample of random 4k performance with 100% write and 100% read activity to get our main results. The top read performer was the DS415play with iSCSI at 862IOPS about four times as high as the TS-451. However with write performance we see the opposite to be true with the TS-451 SMB coming out on top with 886IOPS, almost double what the DS415play had.

Next we took a look at average latency. With a heavy 16T/16Q load, the results mirrored those above. Again the DS415play iSCSI came out on top with the lowest read latency at 296.64ms. And the TS-451 SMB had the lowest write latency at 288.69ms.

Compared to the fixed 16 thread, 16 queue max workload we performed in the 100% 4k write test, our mixed workload profiles scale the performance across a wide range of thread/queue combinations. In these tests, we span workload intensity from 2 threads and 2 queue up to 16 threads and 16 queue. In the expanded 8k 70/30 test, the TS-451 performed well running between 200IOPS and 300IOPS throughout, peaking at 292IOPS. The DS415play iSCSI ran in the 600IOPS range peaking at 668IOPS, while the DS415play SMB ran in a flat range in the 140IOPS range. 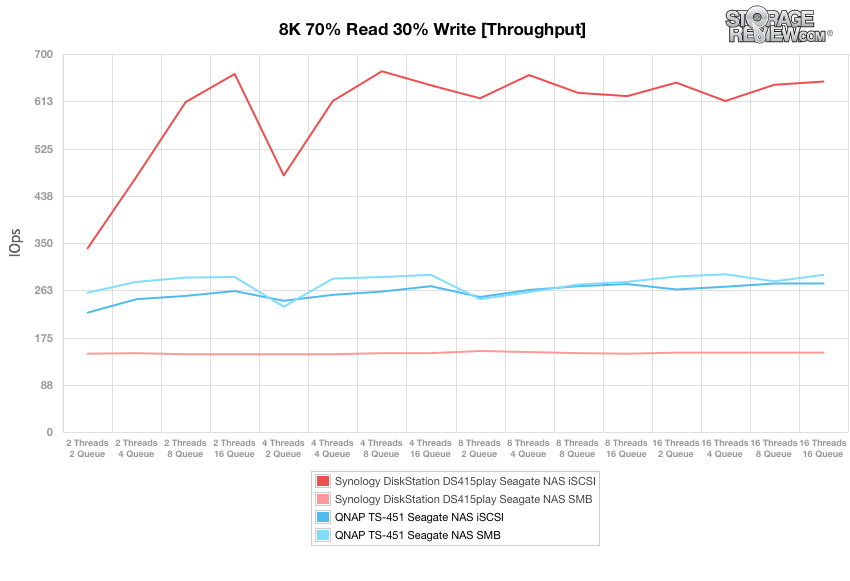 With the 8k 70/30 average response times, we see similar results to the above. The TS-451 ran about in the middle of the pack with both the SMB and iSCSI running neck and neck throughout, while the DS415play had the lowest latency (iSCSI) and the highest latency (SMB). 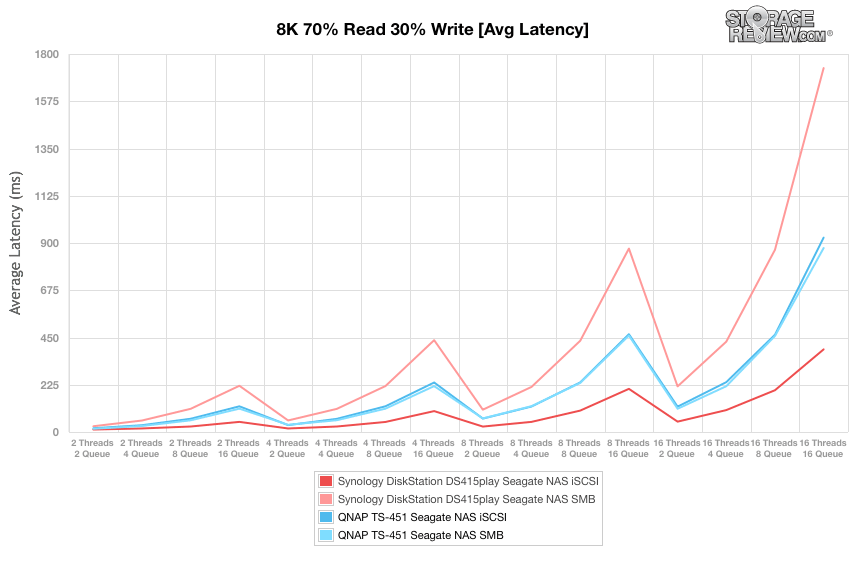 With max latency, we see the TS-451 edge up to the top performer spot with the DS415play having higher latency spikes more frequently. 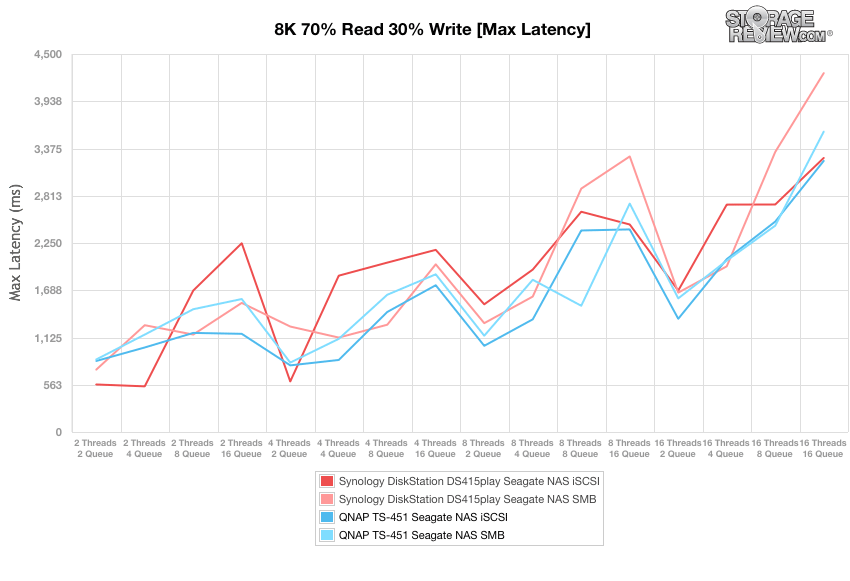 For the entirety of the thread/queue spectrum, the DS415play iSCSI was the top performer. 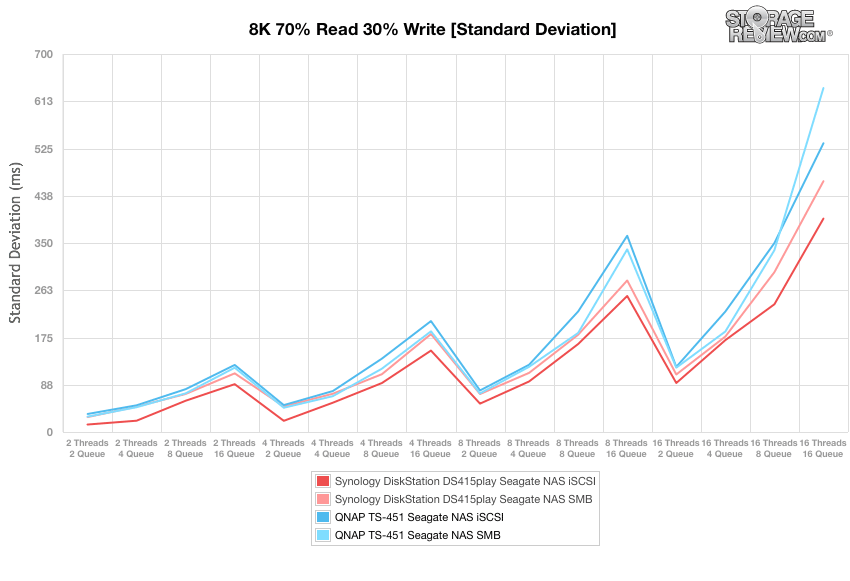 The last test in our small NAS Synthetic Workload testing is the 128k test, which is a large block sequential test that shows the highest sequential transfer speed. Looking at the 128k performance of 100% write and 100% read activity, we see results similar to the 8k sequential throughput with the TS-451 easy beating the DS415play. Both the TS-451 iSCSI and SMB performed very close with the SMB being better in read at 231,379KB/s, and iSCSI being better in write performance at 230,095KB/s.

The QNAP TS-451 NAS is a 4-bay tower form factor NAS that is powered by a 2.41GHz dual core Intel Celeron processor, comes with 1GB of DDR3L RAM, and up to 20TB of capacity. The TS-451 allows cross-platform file sharing, remote access, and has a HDMI outlet for high quality multimedia files. Though it has enough power and capacity for small offices it can be beneficial to the home user that wants a personal cloud, backup, and access to their multimedia digital files anytime. It is the company’s first consumer-grade NAS with virtualization technology.

We measured both CIFS/SMB and iSCSI performance in the QNAP TS-451 and compared it to another SOHO NAS in a similar price category, the Synology DS415play. We found random 4K access performance to top at 233IOPS read and 886IOPS write. With our 8K performance, the TS-451 really pulled ahead topping at 28,443IOPS read and 26,008IOPS write. And we found the device to have large-block sequential speeds at 230MB/s read and 230MB/s write, which is higher than stated by QNAP.

The QNAP TS-451 NAS is a powerful NAS for home, small, and medium businesses. It is the company’s first consumer-grade NAS with virtualization technology and has HDMI connectivity for streaming media in HD.