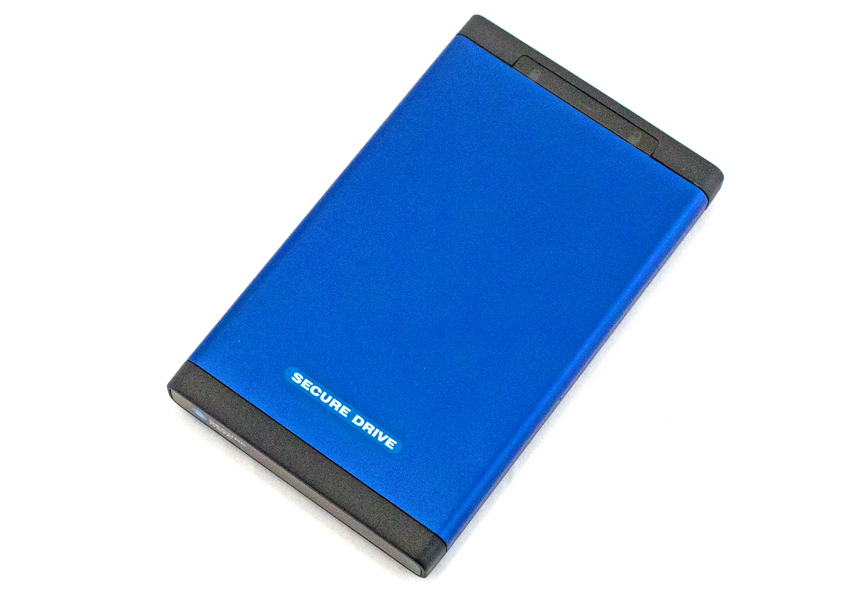 Highlighted by its Military-Grade 256-Bit Hardware Encryption (which encrypts data in real time) and secure wireless authentication using a mobile device, the BT is also touted as the market’s only hardware encrypted storage solution that is remote management ready, a feature that includes geo fencing, time fencing and a remote wipe option. The latter comes in very handy if you want to be absolutely sure your data won’t fall in the wrong hands, as the drive can be completely erased remotely by a mobile app. You can also can remotely change the password and disable the BT completely.

Other features include TouchID and FaceID authentication via the DataLock iOS/Android app, a brute force anti-hacking self-erase mechanism, “Bad USB” protection, and admin/user, read only and step-away modes. The step-away Autolock feature is the most intriguing of the bunch, as it will lock the BT (i.e., unmount from File Explorer/Finder) when your mobile device is moved roughly 3 meters away from the drive for more than 5 seconds. When you return, it will automatically unlock and be ready for use (make sure you turn off the feature or leave your phone next to it when you have to leave during large file transfers). Protection against “BadUSB” is particularly useful. When activated, BadUSB allows the attacker to turn a USB device into a keyboard so they can input malicious commands that target the user’s computer.

As far as performance goes, SecureDrive is quoted at 355MB/s read and 333MB/s for the SSD version. That said, the drive does include both HDD and SSD models, so users looking for a bit more speed will have the option of going the slightly more expensive route with the solid-state option.

Backed by a 2-year warranty, we will be looking at the 250GB model for this review.

The SecureDrive BT consists of a simple blue and black design. Drive branding runs along the bottom. 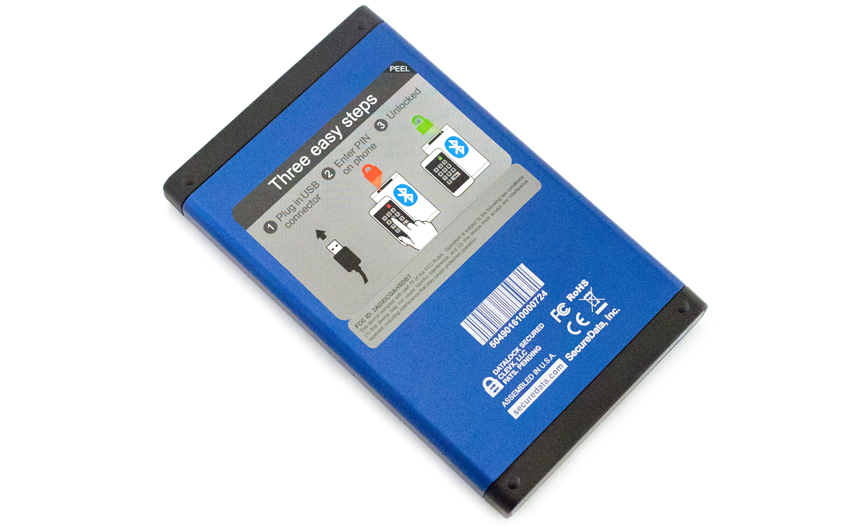 What’s unique about the enclosure are the Locked/unlocked (red, green) and Data transfer (blue) LEDs at the top, which indicate the current security mode of the device. For example, when the “Locked” LED (red) is on and solid, that means the drive is locked but not connected. Similarly, a solid “Unlocked” LED (green) means that it is unlocked and not connected.  You’ll know the BT is successfully connected when the LEDs are blinking as well as during data transfers (blue LED).

Turning the drive over reveals the easy steps to setup the device.

The secureDrive BT (as well as other secure devices from SecureData) is managed through a mobile application that can be downloaded from Apple’s App Store or Google Play. Once the app is downloaded and installed on one’s mobile device, the device needs to be plugged into a computer. The app should autodetect the nearest device though there is an add button if it doesn’t show up automatically. 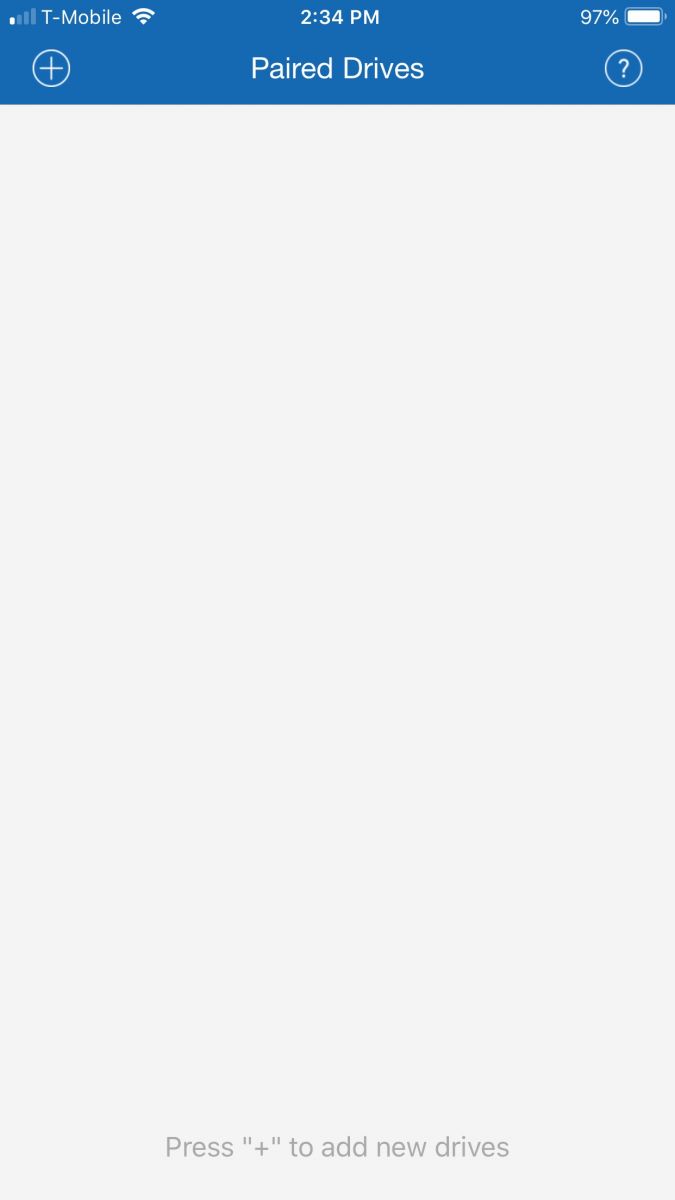 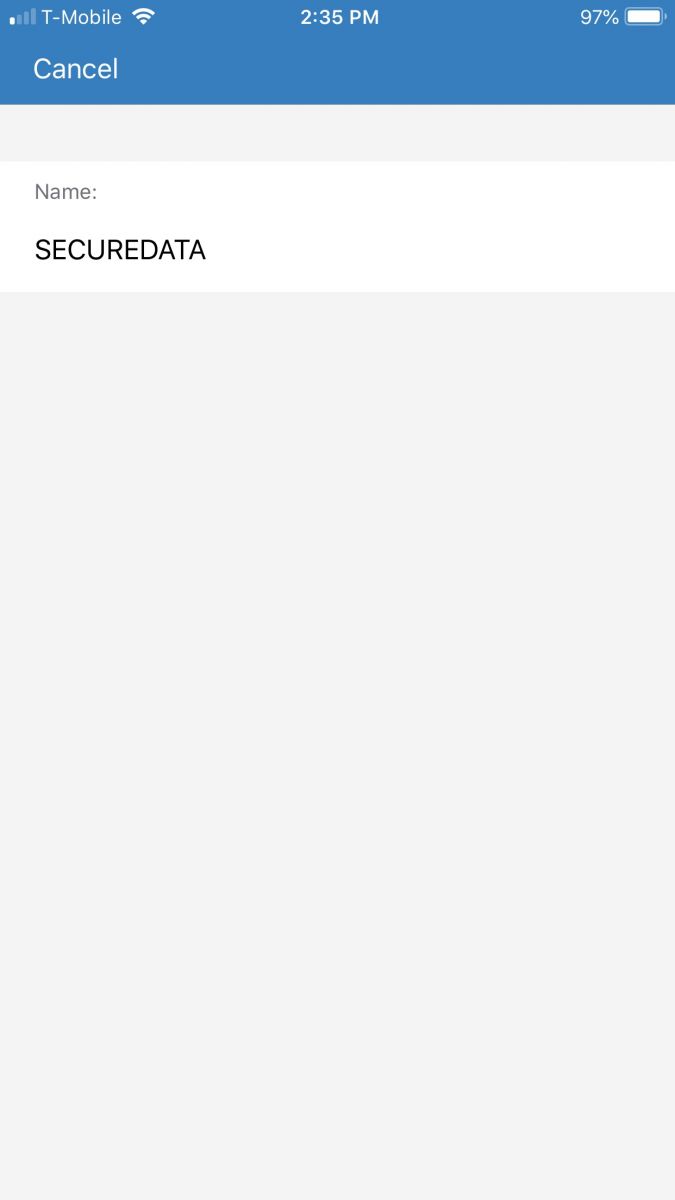 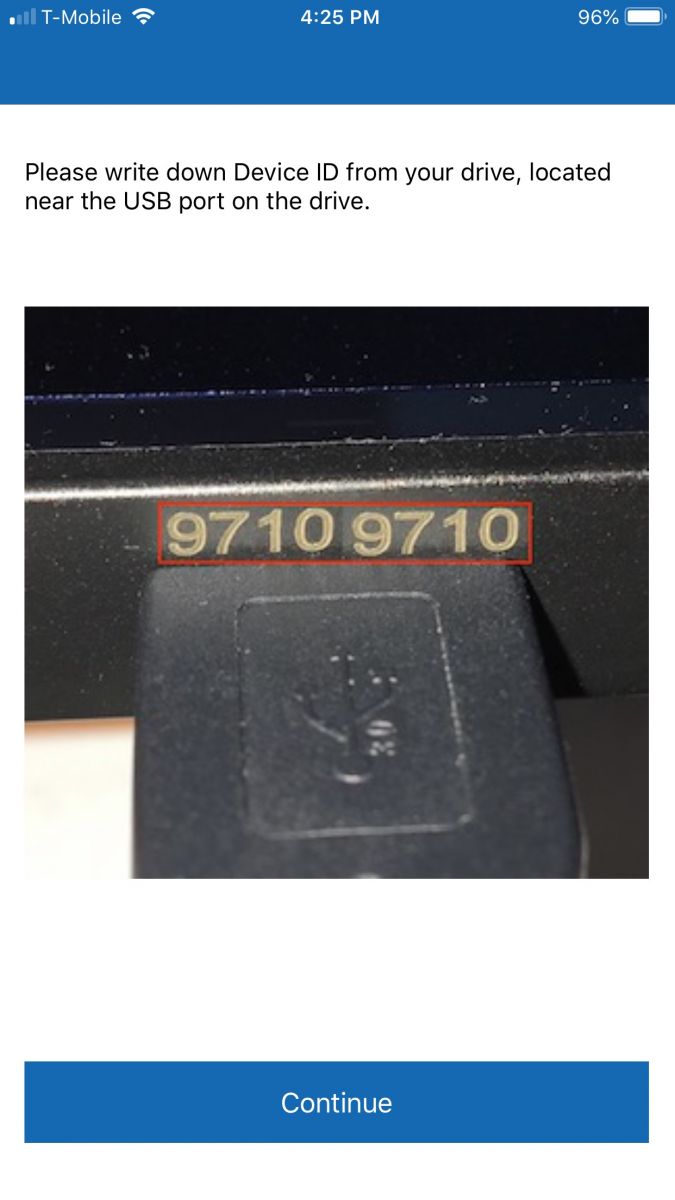 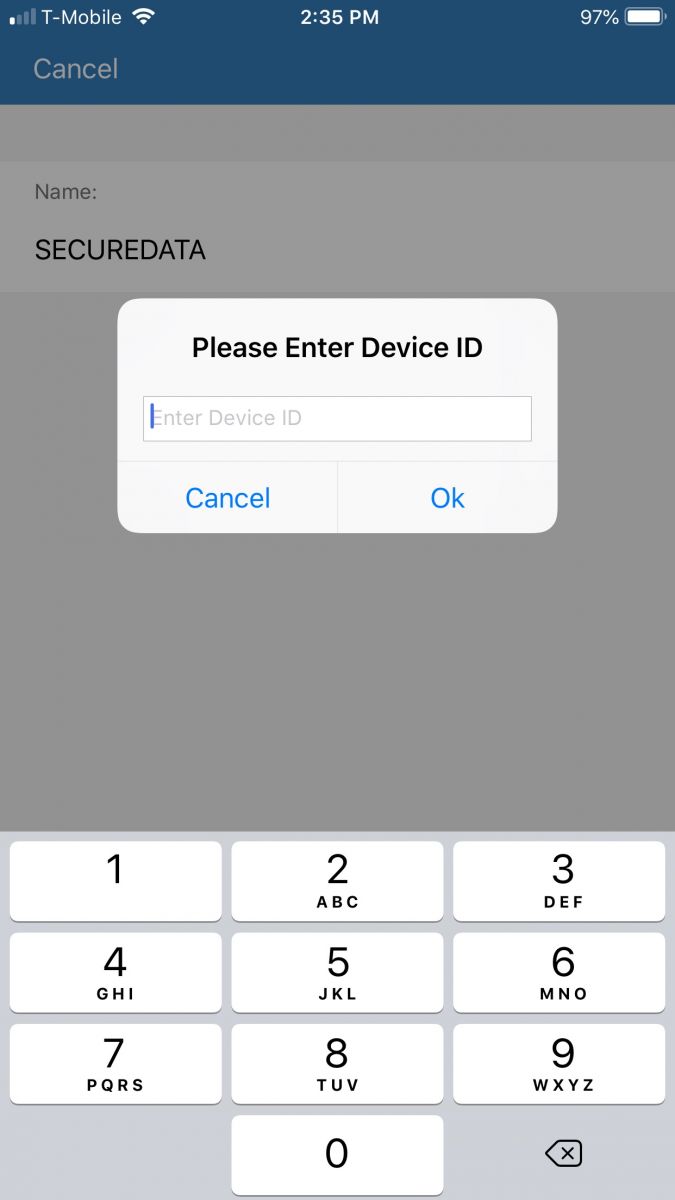 After that users will be brought to a screen where the device is locked. Click on the device and enter the password. 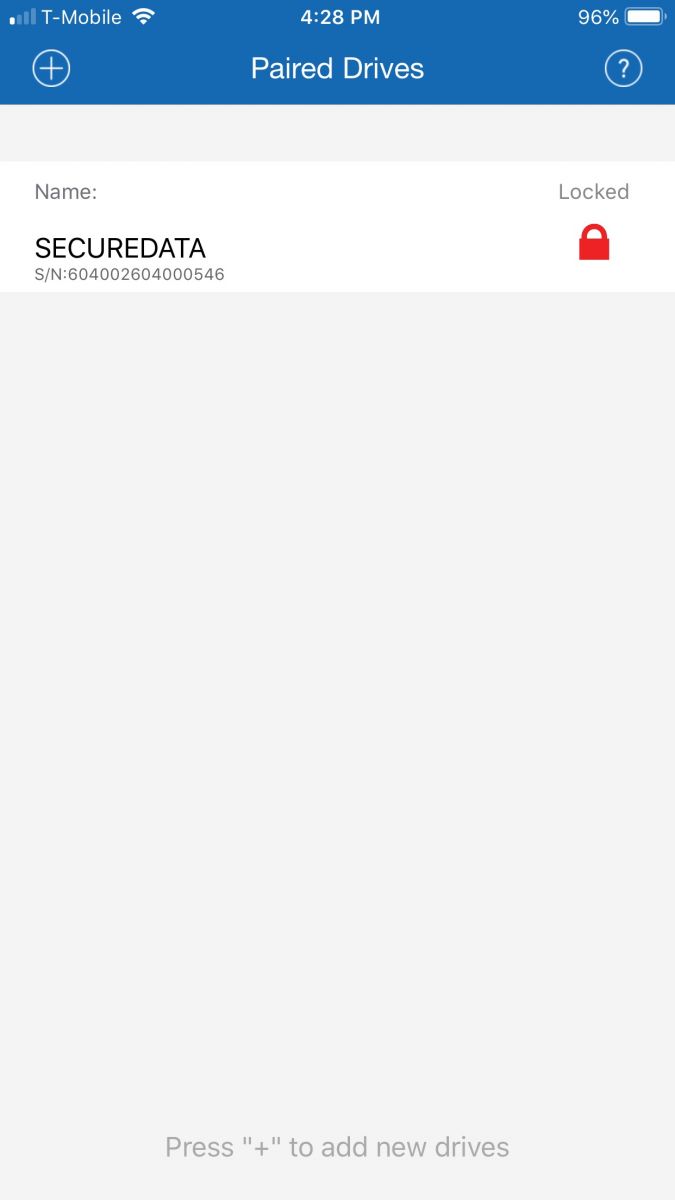 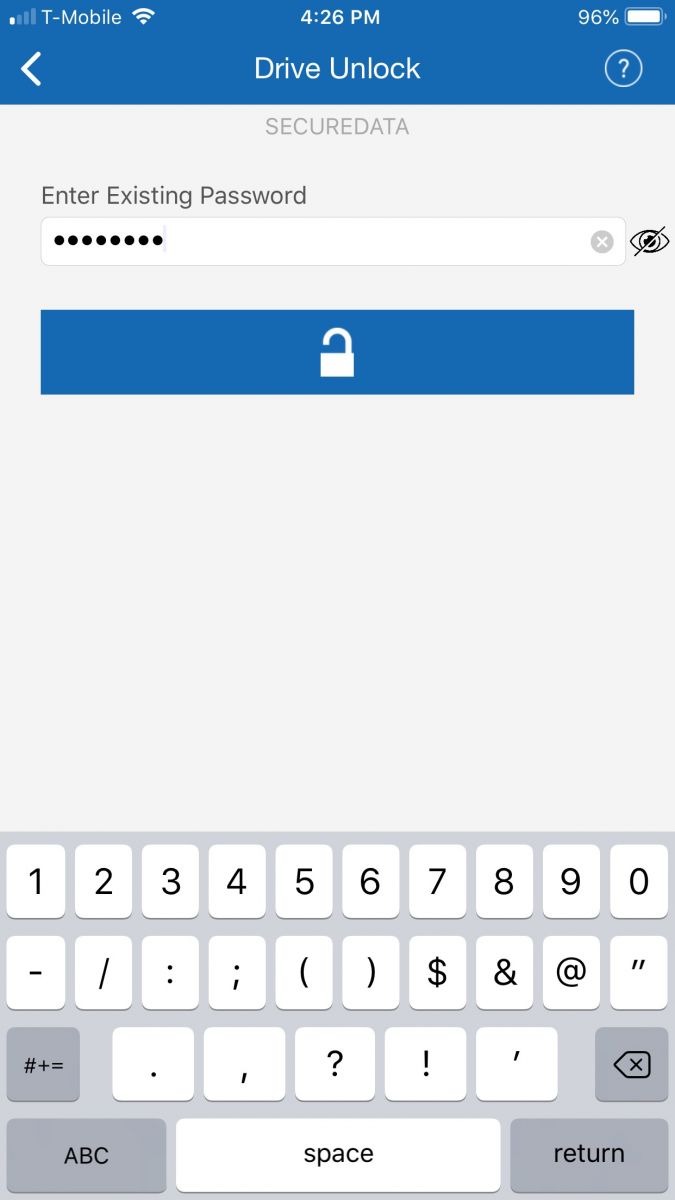 The device becomes unlocked and it can be used. Once it is unlocked, users can click on it to change various options like the password, 2-factor authentication, auto-locking options amongst other choices. 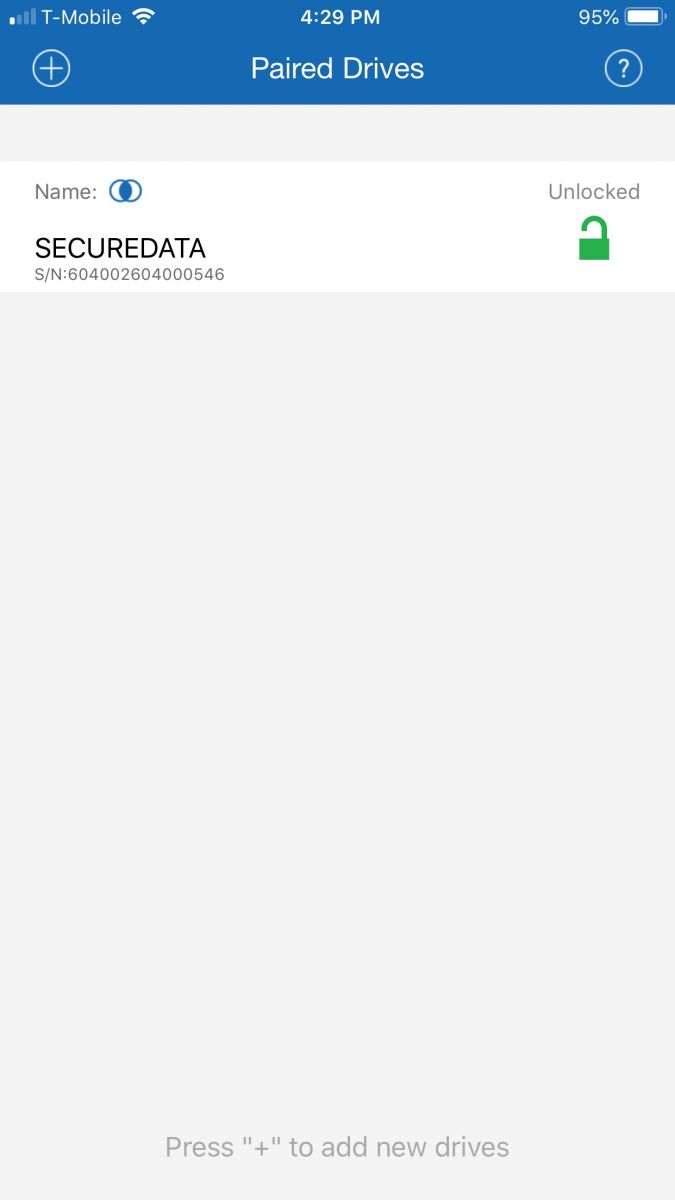 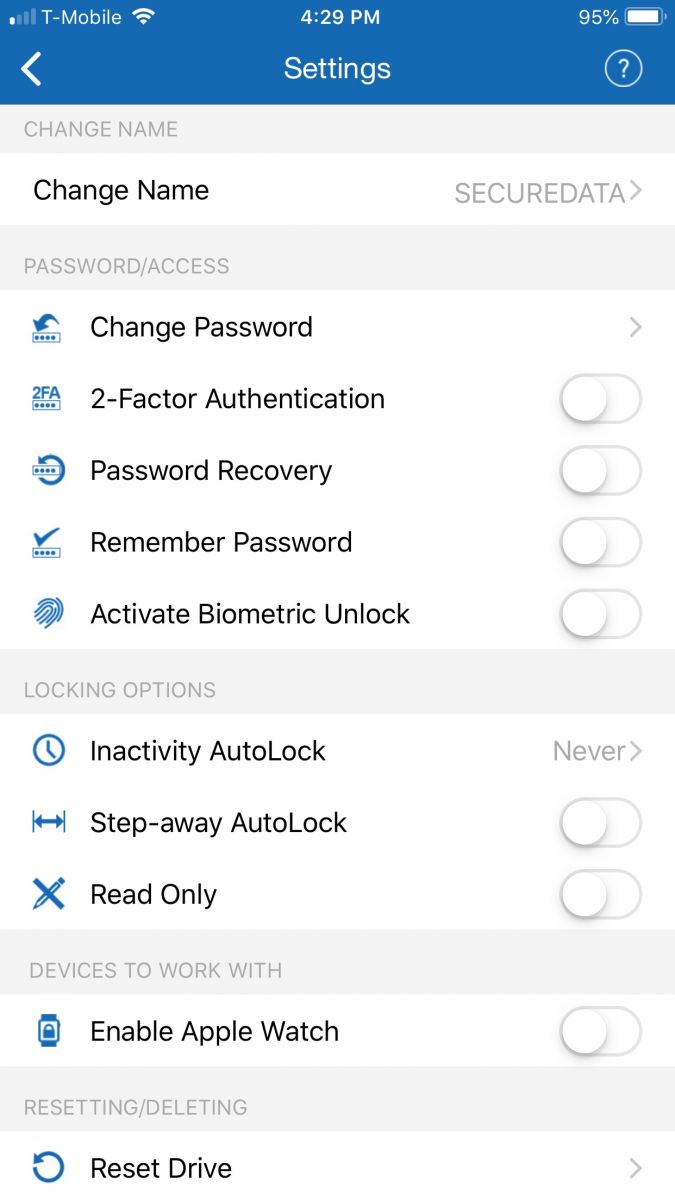 For performance, we ran IOMeter on our Lenovo ThinkStation P920.

In our 2MB sequential workloads the SecureUSB BT saw read speeds of 322MB/s and write speeds of 299MB/s. 2MB random saw the drive hit 303.6MB/s read and 273.4MB/s write. 4K random saw 3,784 IOPS read and 6,455 IOPS write. Overall these are pretty good speeds, though there is a performance penalty for the security features. That said, devices like these are typically purchased for security first; performance is much less important. We provide the data to be more informational than useful for comparisons.

The SecureData SecureDrive BT is a portable SSD that is all about security. The drive is geared more toward those users that see security as paramount though the drive does come in capacities as high as 8TB (HDD) and offers speeds as high as 355MB/s for the SSD. The drive comes with FIPS 140-2 Level 3 and AES 256-bit Hardware Encryption. But the main thrust of the drive is the security and access through an app on users’ mobile devices.

For performance the drive had sequential 2MB speeds of 322MB/s read and 299MB/s write and random speeds of 303.6MB/s read and 273.4MB/s write. With 4K throughput the drive had 3,784 IOPS read and 6,455 IOPS write. For usability, the app is fairly intuitive and easy to use. If you need your data secure it is nice to have the extra steps between the data and someone that wants it for nefarious reasons.