The Sonnet Fusion Dual is a PCI Express 3.0 adapter card that allows users to add up to 32TB of extremely fast enterprise SSD storage to their system via a single PCIe slot. As its name indicates, you simply install the 2.5-inch U.2 (SFF-8639) NVMe PCIe SSDs in each of the two connectors, then pop it into an available x16 PCIe slot.  This unique adaptor card is specifically designed for video editors and others who need a high-endurance and high-performance storage option to put enterprise SSDs into their system.

The Sonnet Fusion Dual is a PCI Express 3.0 adapter card that allows users to add up to 32TB of extremely fast enterprise SSD storage to their system via a single PCIe slot. As its name indicates, you simply install the 2.5-inch U.2 (SFF-8639) NVMe PCIe SSDs in each of the two connectors, then pop it into an available x16 PCIe slot.  This unique adaptor card is specifically designed for video editors and others who need a high-endurance and high-performance storage option to put enterprise SSDs into their system.

The Sonnet card also allows users to benefit from the reliability of enterprise SSDs, which is especially important for mission-critical work that is constantly under heavy workloads. For the general consumer, this might be a viable option for those who simply need an internal NVMe SSD upgrade but require an adaptor to do so, or those who don’t have any more drive ports available on their motherboard and are willing to spend the money on U.2 drives. 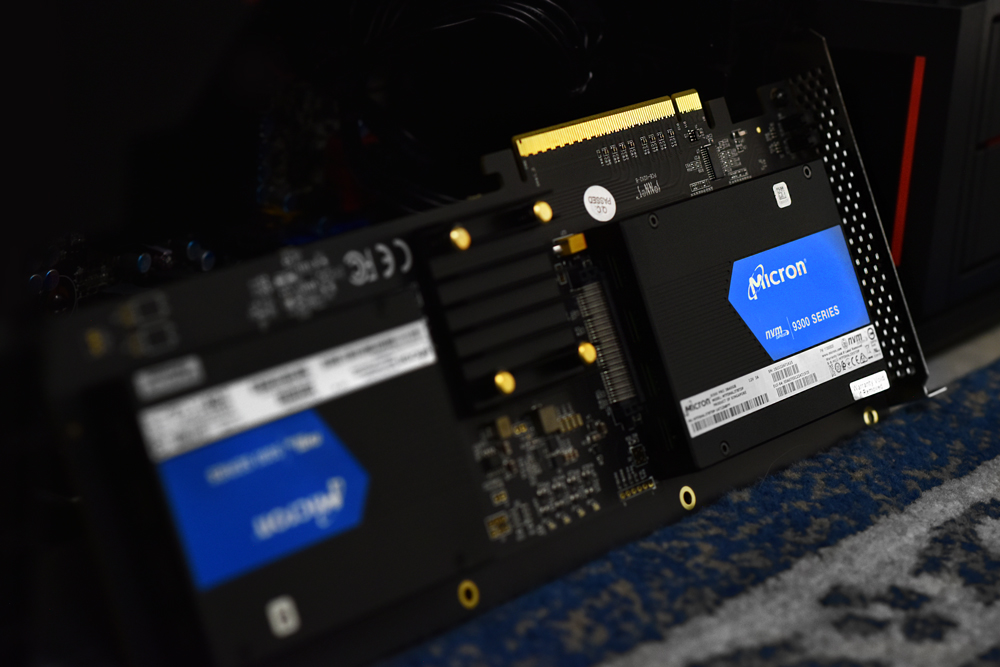 Taking up the space of a single full-length card, the Fusion Dual is pretty much ready to go out of the box, as no separate power/data cables, drive adapters, software, or mounting trays are required to get it up and running. All you need is an available x16 PCIe slot, and you’re good to go. Sonnet indicates that it provides sustained RAID0 speeds up to 6,250MB/s, though performance will vary depending on the type and brand of SSDs you use.

System support is pretty much across the board too, as you can add it to most Windows or Linux PC desktops that are equipped with an x16 PCIe slot, as well as a Mac Pro tower or Thunderbolt expansion system. As far as drive compatibility goes, the Fusion Dual supports a wide range of 2.5-inch U.2 NVMe PCIe SSDs.

Backed by a 2-year warranty, the Fusion Dual U.2 SSD PCIe card goes for roughly $200 dollars (driveless). For this review, we outfitted the device with two Micron 9300 3.84TB SSDs. These drives are the same one we use in server reviews and are mainly designed for AI/ML, OLTOP, NoSQL databases, Large Object, Small Random Block, and Big Data use cases.

The Sonnet Fusion Dual consists of two SSD connectors (one on each side facing opposite of each other) on the board, with a heat sink in the middle. It also features a top extension bracket, which allows for easier installation in systems like a Mac Pro. 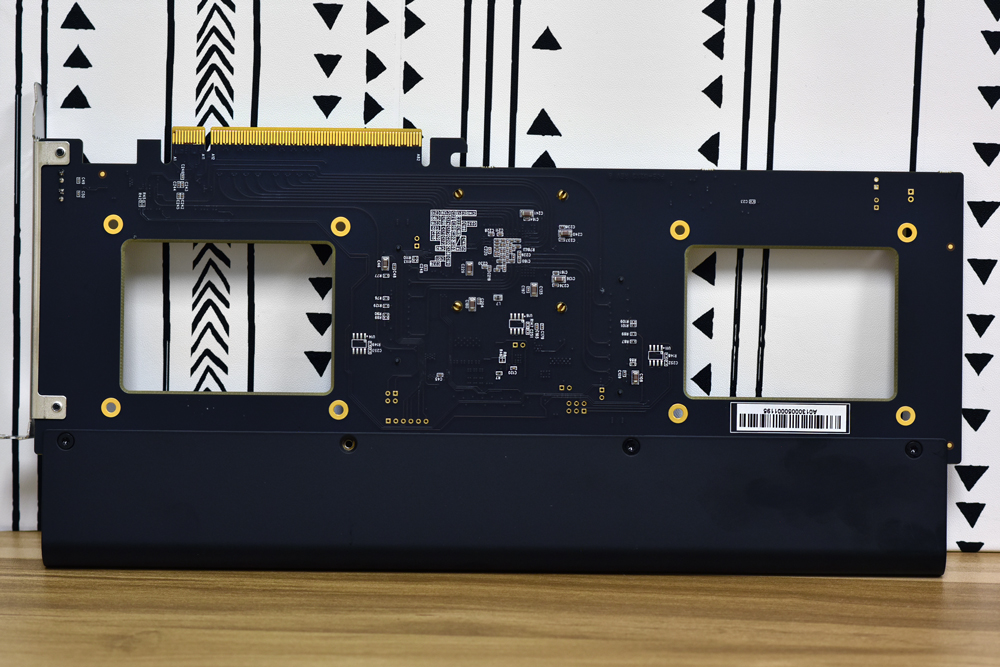 The LED lights are located on the bracket, which flashes to indicate both read and write activity. They will be off if no drives are attached. 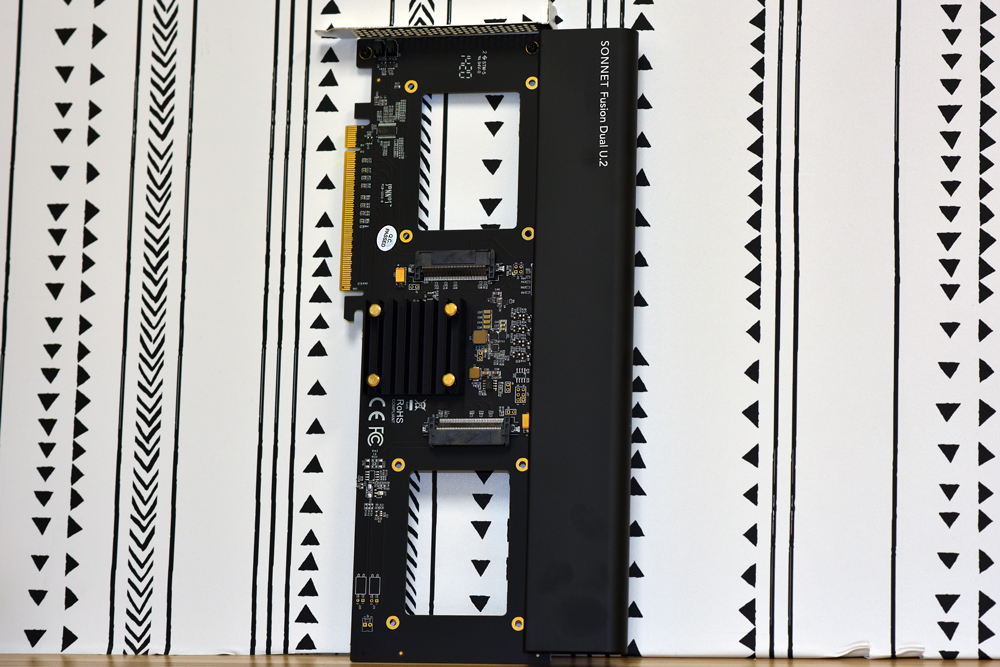 Installing SSDs to the Fusion Dual is fairly easy. We simply had to remove the connector covers, and plug in the drives. Then, while holding them firmly against the board, flip it over and screw in the eight connector screws (4 each) to secure the drives in place. It’s not a tool-less design, but it was a quick and easy process.

If the Fusion Dual ends up being too large to fit inside your computer, you can remove the top extension bracket by removing the four screws along the top that holds it into place. 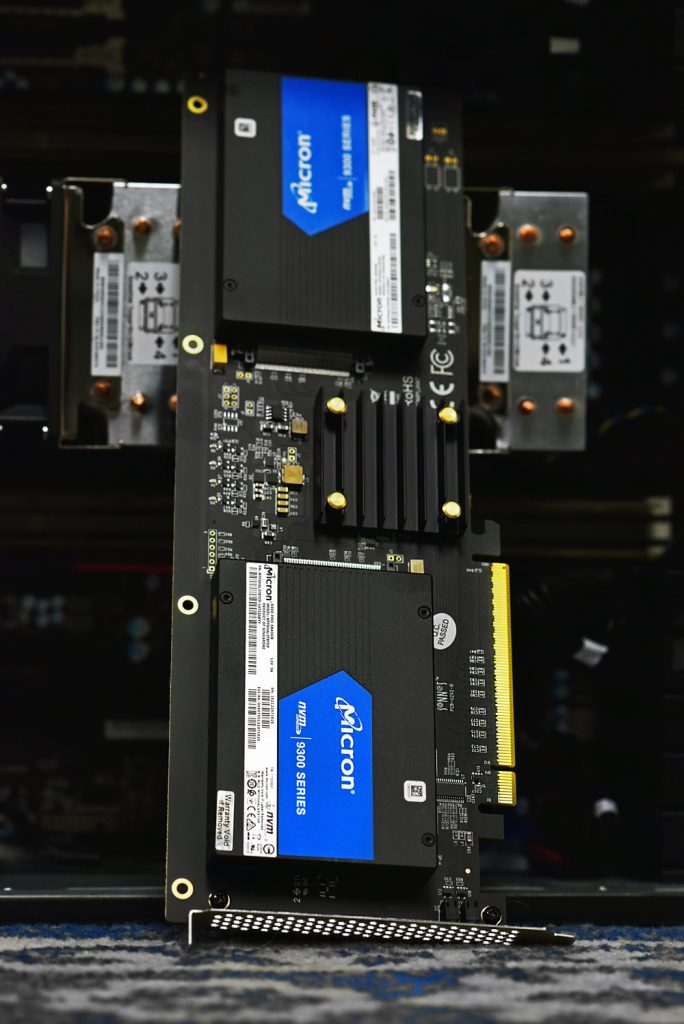 The Houdini test is specifically designed to evaluate storage performance as it relates to CGI rendering. The testbed for this application is a variant of the core Dell PowerEdge R740xd server type we use in the lab with dual Intel 6130 CPUs and 64GB DRAM. In this case, we installed Ubuntu Desktop (ubuntu-16.04.3-desktop-amd64) running bare metal. Output of the benchmark is measured in seconds to complete, with fewer being better.

The Maelstrom demo represents a section of the rendering pipeline that highlights the performance capabilities of storage by demonstrating its ability to effectively use the swap file as a form of extended memory. The test does not write out the result data or process the points in order to isolate the wall-time effect of the latency impact on the underlying storage component. The test itself is composed of five phases, three of which we run as part of the benchmark, which are as follows:

Here, we see the Fusion Dual (populated with dual Micron 9300 3.84TB SSDs) post a score of 2,805.453, finding itself in the middle of the pack. This was expected, as RAID0 and multi-drive configurations don’t help as much in tests like Houdini. 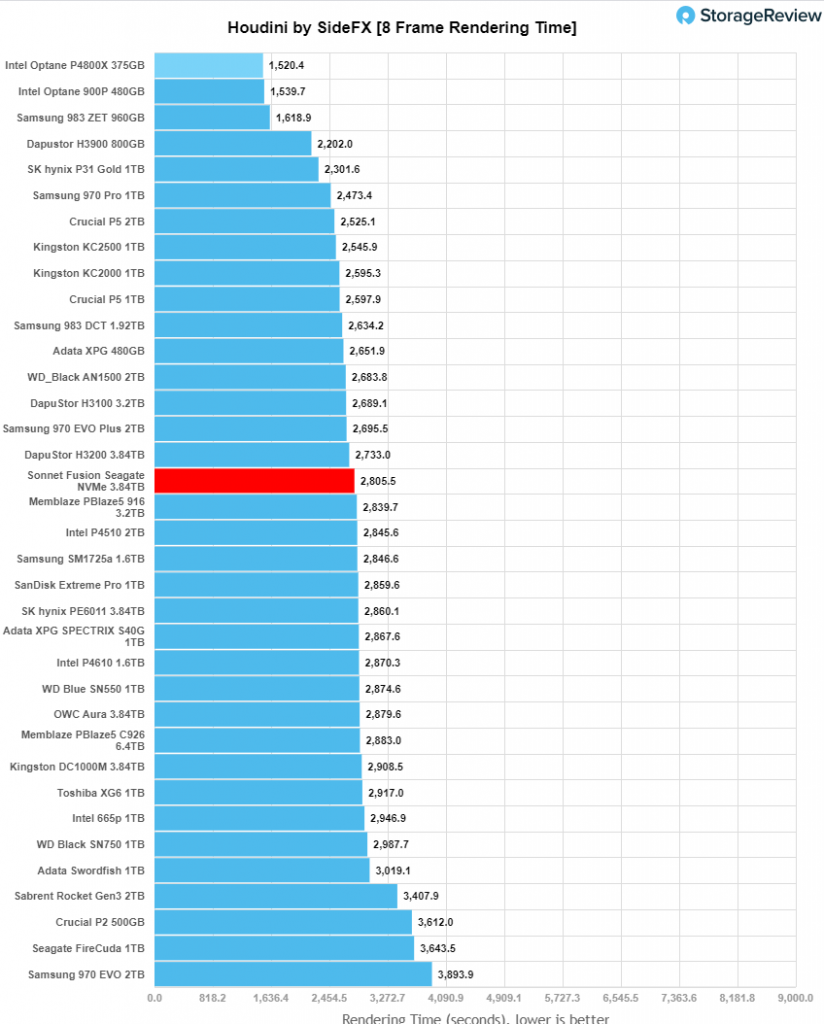 In our first VDBench Workload Analysis, Random 4K Read, the Fusion Dual showed 1.32 million IOPS at a latency of 192.3µs.

In 4K random write, the Fusion Dual showed a peak performance of 396,194 IOPS at a latency of 406.4µs (though it showed a bit of instability towards the end).

Next, we move on to our SQL benchmarks. In SQL workload, the Fusion Dual had peak performance of 411,866 IOPS and a latency of 153.4µs.

Moving on to Oracle workloads, the Fusion Dual started off with a peak performance of 328,174 IOPS and a latency of 190.4µs.

Next, we switched over to our VDI clone test, Full and Linked. For VDI Full Clone Boot, the Fusion Dual had a peak of 314,768 IOPS with a latency of just barely over 200µs.

For VDI FC Initial Login saw the Fusion Dual with a peak of 86,833 IOPS and a latency of 570.6µs after suffering from a few spikes in performance.

VDI FC Monday had the Fusion Dual record a score of 87,949 IOPS and a latency of 360.9µs before taking a hit in performance at the very end.

Next up is VDI Linked Clone. Starting with the boot again, the Fusion Dual showed a peak of 157,670 IOPS and a latency of 202.1µs.

For VDI LC Initial Login the Fusion Dual recorded a peak score of 44,119 IOPS with a latency of 359.6µs.

Finally, with VDI LC Monday Login, the Fusion Dual showed a peak performance of 47,090 IOPS and a latency of 675.4µs.

The Sonnet Fusion Dual is an easy way to add some extra, ultra-high-speed 2.5-inch U.2 NVMe storage to your system via PCI Express 3.0. The extra 32TB of NVMe space can certainly go a long way in many use cases, especially video editors and those who need a high-endurance and high-performance storage option for their enterprise SSDs. The Fusion Dual also brings the reliability benefits of enterprise drives, which is vital for those with mission-critical work constantly under heavy workloads.

The Fusion Dual adapter card also works right out of the box, as there was no need for additional drive/power cables, software, or mounting trays to get this thing working. All we did was install the two drives on the board using the bundled screws, added it to an open x16 PCIe slot, and began our testing. 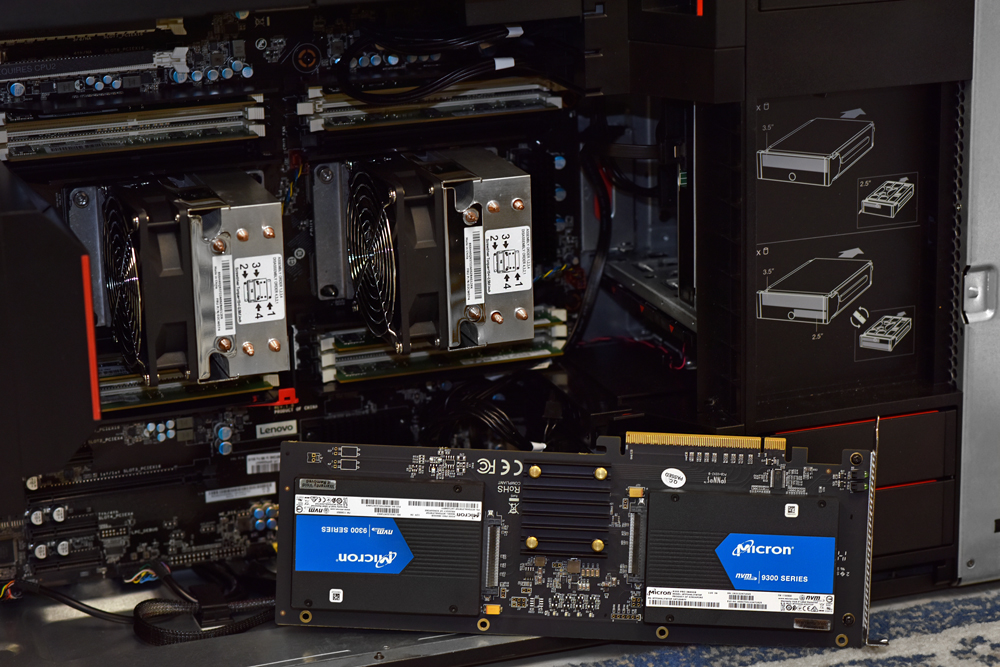 At $200 dollars, the Sonnet Fusion Dual U.2 card is an inexpensive way to add some flexibility to your system if you already have a few U.2 drives laying around. However, it will get quite pricey if you want to leverage the maximum of 32TB and don’t already have the drives available, as drives like the Micron 9300 Pro 15.36TB drive goes for roughly $2,500. Nonetheless, the ability to create redundant storage on a single card, all the while keeping 6.34GB/s transfer speeds, makes for a very attractive solution to professionals with the compatible components and budget.