The Synology DiskStation DS1621xs+ was launched in mid-September of this year as an update to Synology’s line of high-end business NAS in a desktop form factor. The DS1621xs+ offers six 3.5″ drive bays, though it is expandable to 16 total bays via two 5-bay DX517 JBODs.

The Synology DiskStation DS1621xs+ was launched in mid-September of this year as an update to Synology’s line of high-end business NAS in a desktop form factor. The DS1621xs+ offers six 3.5″ drive bays, though it is expandable to 16 total bays via two 5-bay DX517 JBODs. 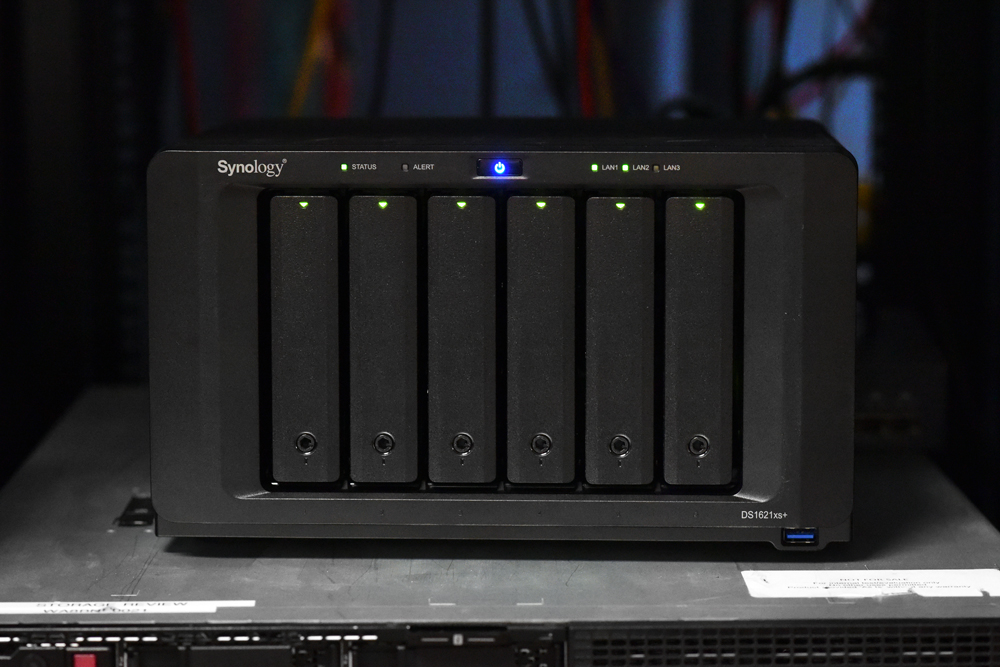 Under the covers resides an Intel Xeon D-1527 4-core 2.2 GHz CPU, 8GB DDR4 ECC SODIMM (expandable up to 32GB), and dual M.2 2280 NVMe SSD bays for caching. Turning to connectivity, the DS1621xs+ offers a few ports onboard, including twin GbE ports and a single 10GbE RJ-45 port. Should an organization need even more, this NAS offers a PCIe expansion slot as well which can be used for additional SSD slots, networking, or with the Synology combo card, both.

While the DS1621xs+ uses DiskStation Manager (DSM) for its operating environment (on top of the Btrfs file system), the horsepower within this build makes some of the advanced features more scalable for multi-tenant environments. Synology sees this NAS as a perfect solution for businesses that want to take advantage of Synology’s suite of cloud, collaboration, and virtualization services.

The Synology DiskStation DS1621xs+ looks like the rest of the company’s tower form factor NAS devices. The chassis is matte black and made of metal and plastic. Across the front are the 3.5” drive bays that include the ability to lock and a drive status indicator LED at the top. The top of the device from left to right has a status indicator, alert indicator, power button, and the LAN indicator lights. There is a USB 3.0 port in the bottom corner as well. 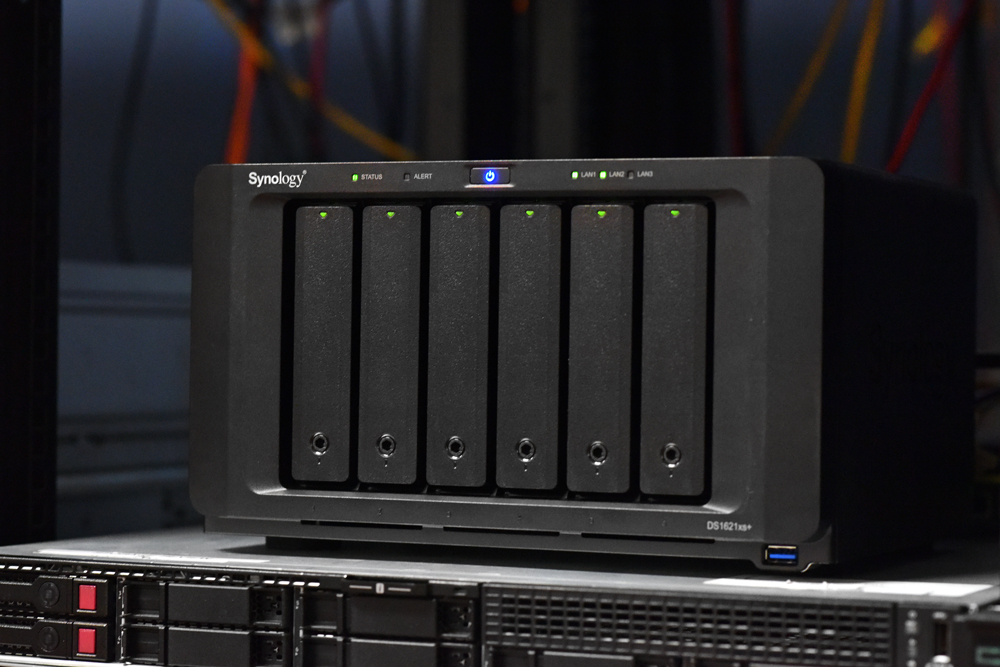 Flipping the NAS around to the rear we see the fans that take up a bulk of the real estate. To the left, is the power port and the Kensington security slot. To the right, is the PCIe expansions slot. Across the bottom, from left to right, are two USB 3.0 ports, a 10GbE RJ-45 port, two 1GbE RJ-45 ports, a reset button, and two expansion ports. 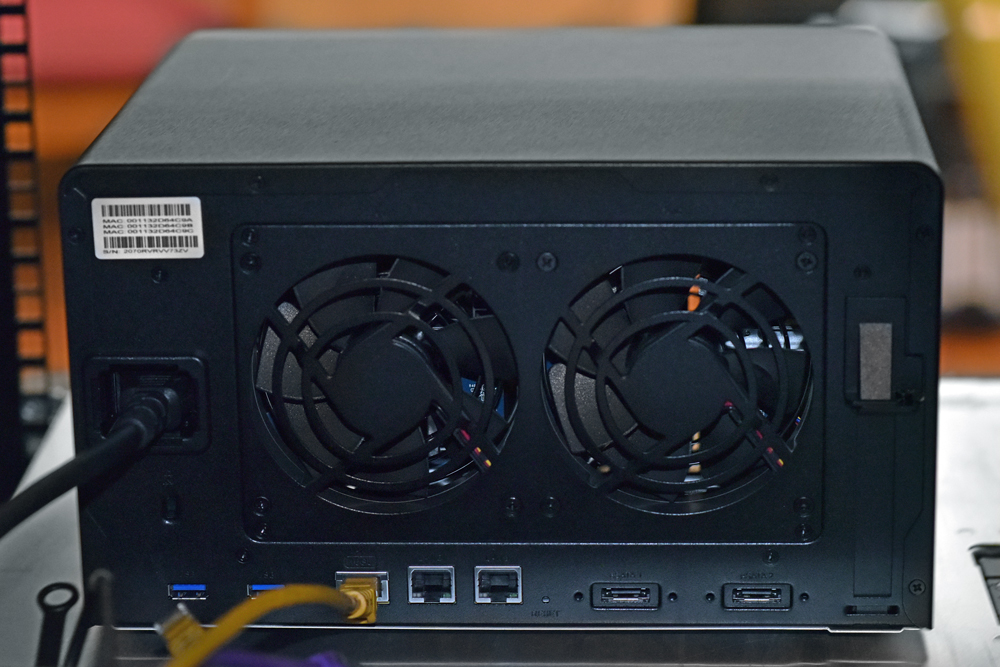 The M.2 cache is in a bit of a different spot, being on the inside of the device on the left side of the furthermost drive bay. 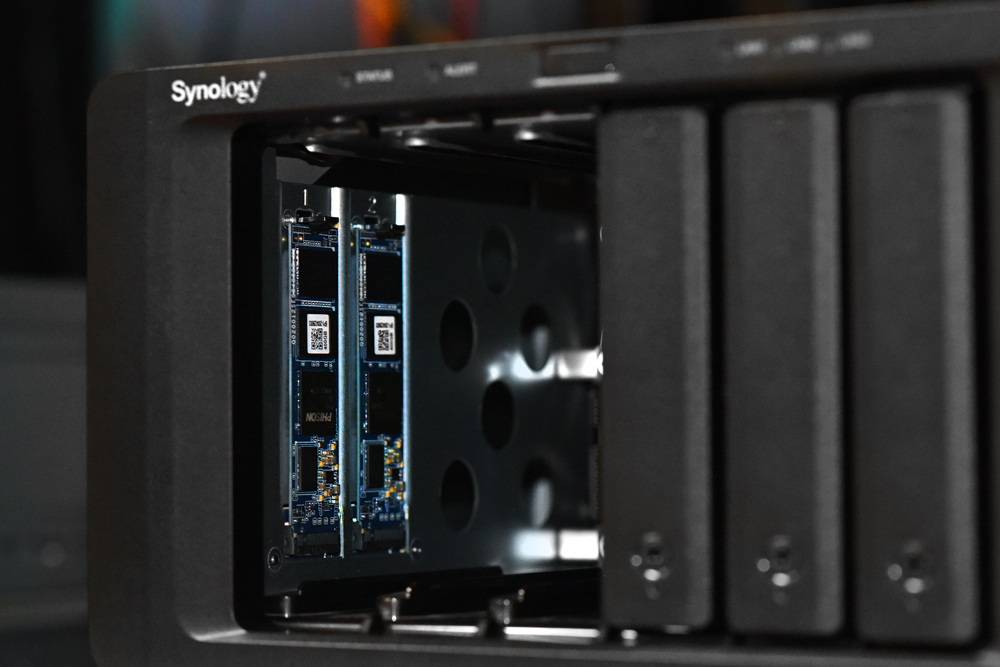 For our testing, we configured the Synology DiskStation in RAID6 in both iSCSI and SMB. We ran each test with the SSD cache off and on. For HDD we used WD Red 14TB and for the SSD cache, we used two Synology SNV3400-400G SSD. This is not a comparison of the SSD cache on or off – the SSD cache will provide better performance. This reflects what to expect if users choose to leverage it or not.

Compared to the fixed 16 thread, 16 queue max workload we performed in the 100% 4K write test, our mixed workload profiles scale the performance across a wide range of thread/queue combinations. In these tests, we span workload intensity from 2 thread/2 queue up to 16 thread/16 queue. In throughput, we saw iSCSI run from 718 IOPS to 2,461 IOPS and SMB run from 231 IOPS to 235 IOPS. With the cache on, iSCSI went from as low as 10,293 IOPS up to a high of 55,677 IOPS and SMB ran other steady-ish line starting on a high of 2,509 IOPS and finishing rather low with 1,286 IOPS. 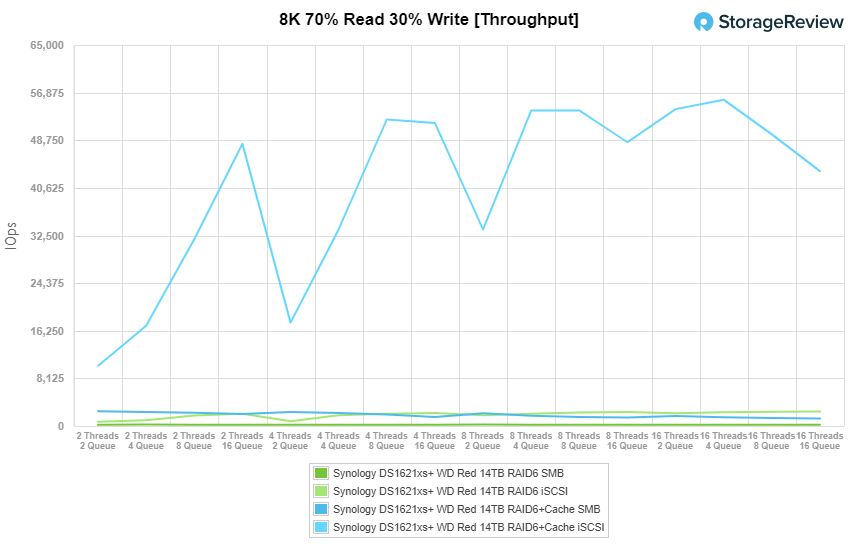 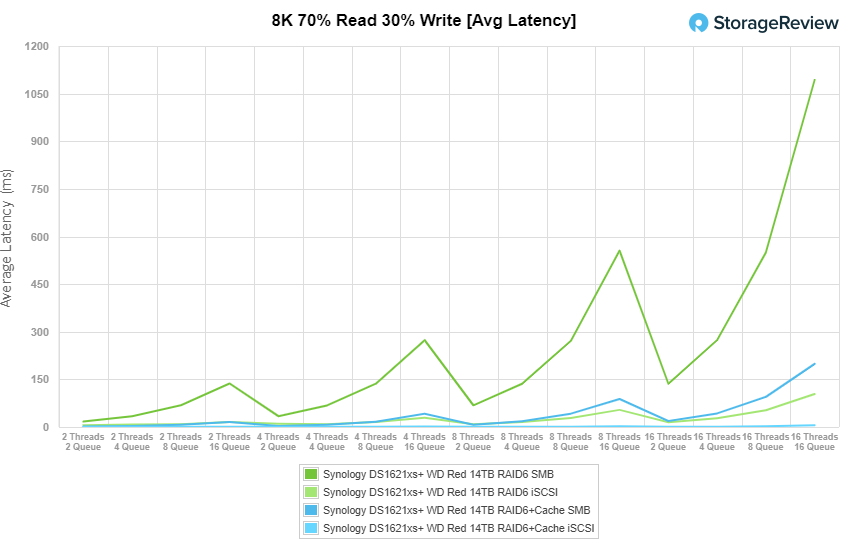 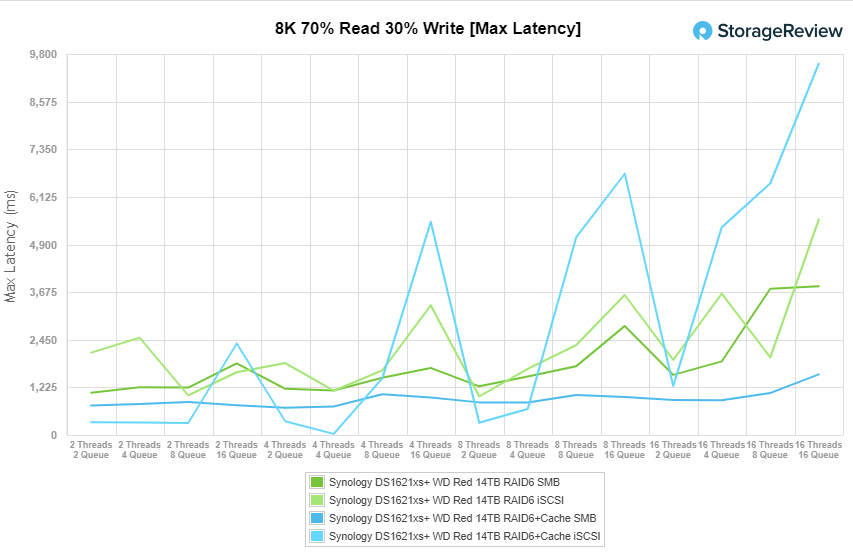 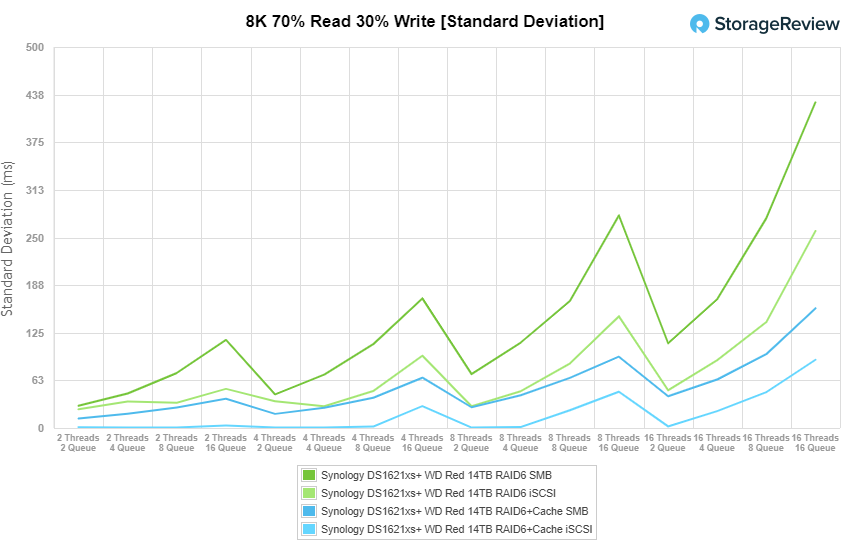 The last Enterprise Synthetic Workload benchmark is our 128K test, which is a large-block sequential test that shows the highest sequential transfer speed for a device. In this workload scenario, the DS1621xs+ was able to hit 1.15GB/s read and 937MB/s write in iSCSI and 1.16GB/s read and 930MB/s write in SMB. Turning on the cache saw the iSCSI read hold steady at 1.15GB/s and the writes drop to 898MB/s. SMB saw a bigger drop with read dropping all the way to 388MB/s and write dropping to 318MB/s.

The Synology DiskStation DS1621xs+ is a high-performance 6-bay NAS designed to meet the needs of small businesses and other organizations that expect to have several users hitting the NAS at once. The NAS can be expanded up to 16 drives with two 5-bay expansion units. Other hardware features include an Intel Xeon D-1527 4-core 2.2 GHz CPU, up to 32GB DDR4 ECC SODIMM (though coming with 8GB), dual M.2 2280 NVMe SSD bays for caching, and an onboard 10GbE port. Combine this with the user-friendly DSM operating system, and users have a pretty powerful device.

Synology adds yet another solid release with the DiskStation DS1621xs+. Aimed at the smaller businesses with the room to grow, the DS1621xs+, outfitted with SSD cache, should be able to meet all their NAS needs.