The Spectra nTier Verde is designed for use cases such as secondary backup, archive, tape cache, and to be used as a digital parking lot. To this end, the nTier Verde product was designed specifically for sequential, low IOPs, large file size type workloads typically suited for archiving large amounts of data. The device is also aimed at handling rapid data escalation and data retention policy changes. Though it would work fine with general IT (especially if IT resources are limited, with its ease of use and setup), it would be ideal for use in media and entertainments, HPC, data analytics, video surveillance/security, and federal/SLED use. Along with mirroring, the Verde supplies double- and triple-parity options (2 or 3 drive failures could happen per parity group without the loss of data).

The Spectra nTier Verde comes with a 1-year warranty for hardware and software and comes with a starting street price of $16,000 for the 2U and $31,500 for the 4U.

The Spectra nTier Verde comes as either a 2U or 4U rack mount. It has a LED-backlit green grill that covers the front of the device with company branding in the center and a rainbow light show like no other bezel we’ve seen. Removing the grill gives access to the drives as well as the user controls on the front of the array. On the left hand side is the power button, reset button and status lights indicating drive activity, network activity, system overheat, and power failure.

The rear of the device houses dual power supply inlets are on the upper left hand side. In the upper middle of the device is the 1GbE connectors and a VGA port. Going to the right of these ports are two 10GbE ports for additional high-speed Ethernet connectivity. The rear side also contains 12 additional 3.5″ HDD slots that come populated in this model.

The Spectra nTier Verde has a streamlined GUI, StrataView Interface. Once everything is setup and ready to go, users will arrive at a dashboard that shows the system and its performance. At the top of the screen are four tabs for dashboard, configuration, status, and support.

From the main screen users can view all information relating to the usage of the storage pools and volumes, network configuration or performance stats. From this main portal window you can also drill into the configuration, status and support pages. 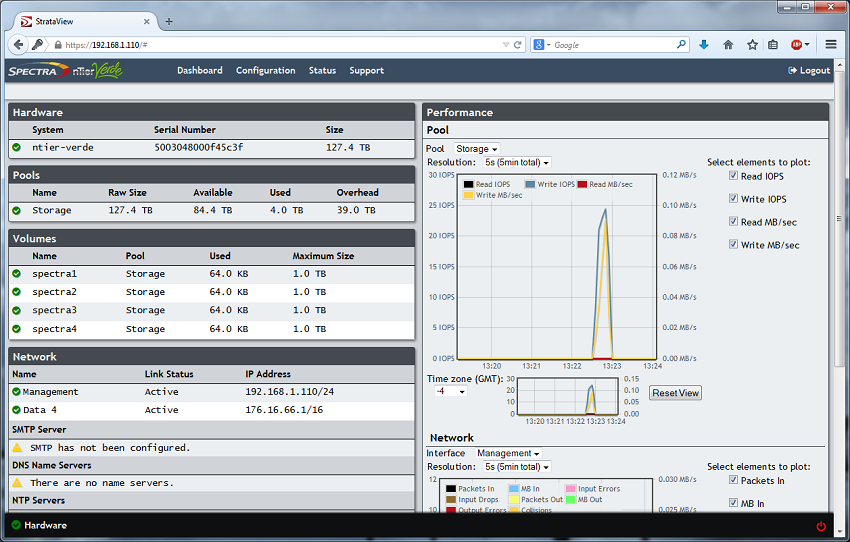 In our review we configured the array in both RAID60 as well as RAID10 for performance versus reliable capacity modes. In the following screenshot we show the storage pool status with the array configured in a RAID60 mode with dual drive parity. 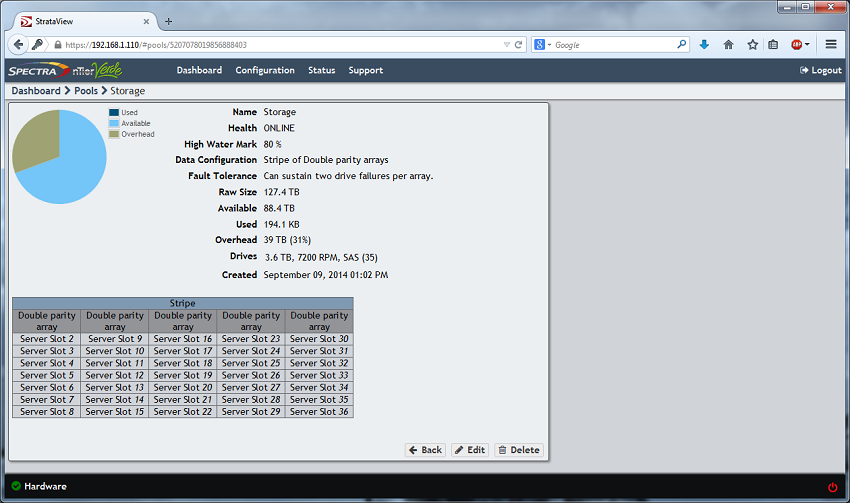 Shares can also be created through the configuration tab. In this case we are creating four CIFS shares for our synthetic benchmark testing. Currently the way the user permissions are handled, only once connected to an Active Directory environment will additional user permissions be created. So unlike other NAS platforms, local user management isn’t included through the WebGUI management. 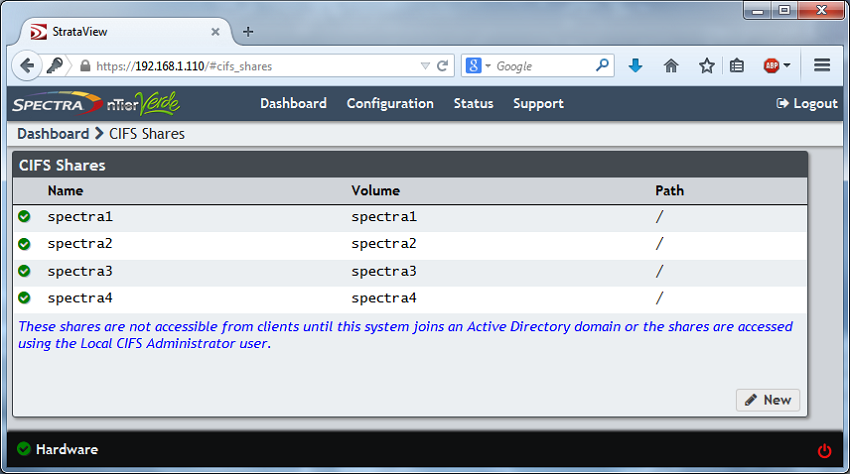 Users can create volumes through the dashboard to mark where their data is stored. They have to name the volume, choose the pool, and then set the minimum and maximum size for the volume. You can also select additional options such as read-only storage or enable/disable compression.

The Spectra nTier Verde is being tested in our SQL Server 2012 environment, although unlike most of our performance tests that measure TPC-C performance, this one looks at backup performance while leveraging our benchmark to create change within a given database. For this side by side comparison, we use SQL Server’s internal CIFS backup pointing to a traditional share on the nTier Verde as well as one backup pointing to a share with compression enabled. We tested the Spectra nTier Verde leveraging SQL Server 2012 with a 10GbE connection to the array. For our CIFS tests we used the native backup support built into SQL Server. In both configurations we used 4 streams to maximize the bandwidth across each interface. Each of the 10GbE test routines includes seven runs. The first is a full SQL back up job. Runs 2-4 are full backups with no changes to the database. The fifth run is a backup after the TPC-C benchmark runs, essentially causing wholesale changes to the underlying SQL database. The last runs again reflect no database changes.

Our set of results will present the Spectra nTier Verde in two storage modes, RAID10 and RAID60 to look at one configuration optimized for performance with one aimed at capacity.

The next results are derived from a protocol composed of random 70% read operations and 30% write operations with an 8k workload across a range of thread and queue counts. The RAID10 had an overall higher throughput from start to finish, though both configurations started out higher and dropped into higher queue depths.

Looking at average latency we see that the RAID10 configuration had faster response times throughout.

Looking at max latency the RAID10 configuration was again the overall better performer though the RAID60 configuration ran with it neck and neck at times.

With standard deviation we again see the RAID10 configuration as the top performer but the RAID60 ran much closer throughout this time.

The Spectra nTier Verde is a rack mount NAS used primarily as a secondary storage device for bulk data. It comes in both 2U and 4U form factor and runs from 24TB of raw capacity all the way up to 1.7PB. It has a simple setup, claiming 30 minutes from box to production, though we did it in less. Once up and running the GUI offers intuitive management with a dashboard that pulls together the most relevant items. The nTier Verde has some of the lower aggregate cost of data storage around, running at $0.35/GB in the higher capacity version, ideal for this tier of data.

For our enterprise workload testing, we measured and compared RAID10 and RAID6 configuration on the Spectra nTier Verde. We found random 4K access performance to top at 3,915 IOPS for write and 307 IOPS for read. With our 8K performance, the Spectra nTier Verde showed a top performance of 16,738IOPS read and 19,575 IOPS write. And we found the device to have large-block sequential speeds at 996MB/s read and 543MB/s write.

Overall the system is quite flexible and is being positioned with many partners like CommVault and Veeam to bring solutions-oriented packages to market. Given its ease of use paired with data compression, the Verde finds a unique, almost do-anything, segment for itself. Because it’s not shoehorned into a single specific use case some may look past nTier Verde, but its ability to be somewhat of a storage chameleon enables more use cases and options when it comes to storing lower-tier data.

The Spectra nTier Verde is a secure, cost-effective, and easy to setup and use secondary backup appliance with plenty of scalability and performance for lower-tier data needs.