Video surveillance is an interesting vertical as it has a lot of seemingly contradictory requirements. On the one hand, it must have a high level of availability and be secure, reliable, and able to process different video streams efficiently in real time. On the other hand, it needs to be able to run in locations with minimal support staff with technical skills to deploy and maintain its software and hardware. And, to top it all off – it needs to be cost-efficient.

Video surveillance is an interesting vertical as it has a lot of seemingly contradictory requirements. On the one hand, it must have a high level of availability and be secure, reliable, and able to process different video streams efficiently in real time. On the other hand, it needs to be able to run in locations with minimal support staff with technical skills to deploy and maintain its software and hardware. And, to top it all off – it needs to be cost-efficient.

Further complicating matters is the fact that users of these video surveillance systems have different requirements. Some need only a system that supports a minimal number of cameras with rudimentary playback and search-by-timestamp features, while others need a system that supports hundreds of cameras with the ability to conduct real-time data analytics and processing.

With all these factors in mind, StarWind has created a turnkey hyperconverged infrastructure (HCI) solution that addresses these concerns, requirements, and demands.

Without a doubt, HCI has been one of the greatest datacenter successes in the last decade. HCI uses a group of servers (nodes) to create a cluster that utilizes the local storage on servers, along with software-defined storage (SDS), to create a pool of storage that can be used by the servers in that cluster. Perhaps more importantly, HCI also manages the compute and storage from a single management console.

HCI is an ideal architecture for applications that scale linearly (i.e., applications that have a direct correlation between storage and compute usage). StarWind has seized this opportunity by using bespoken and purpose-built HCI servers to create a line of hyperconverged appliances (HCA) for the video surveillance marketplace. But StarWind has innovated on the traditional HCI model where you need to add additional nodes if you want to add additional storage by using “drop-in capacity” kits that increase the storage capacity of existing nodes. This allows you to not only scale-out (per typical HCI), but also allows you to scale up the storage capabilities of your existing nodes. This a huge advantage for their customers as it saves them the cost of hardware and licenses when additional storage capability is needed in their environment. 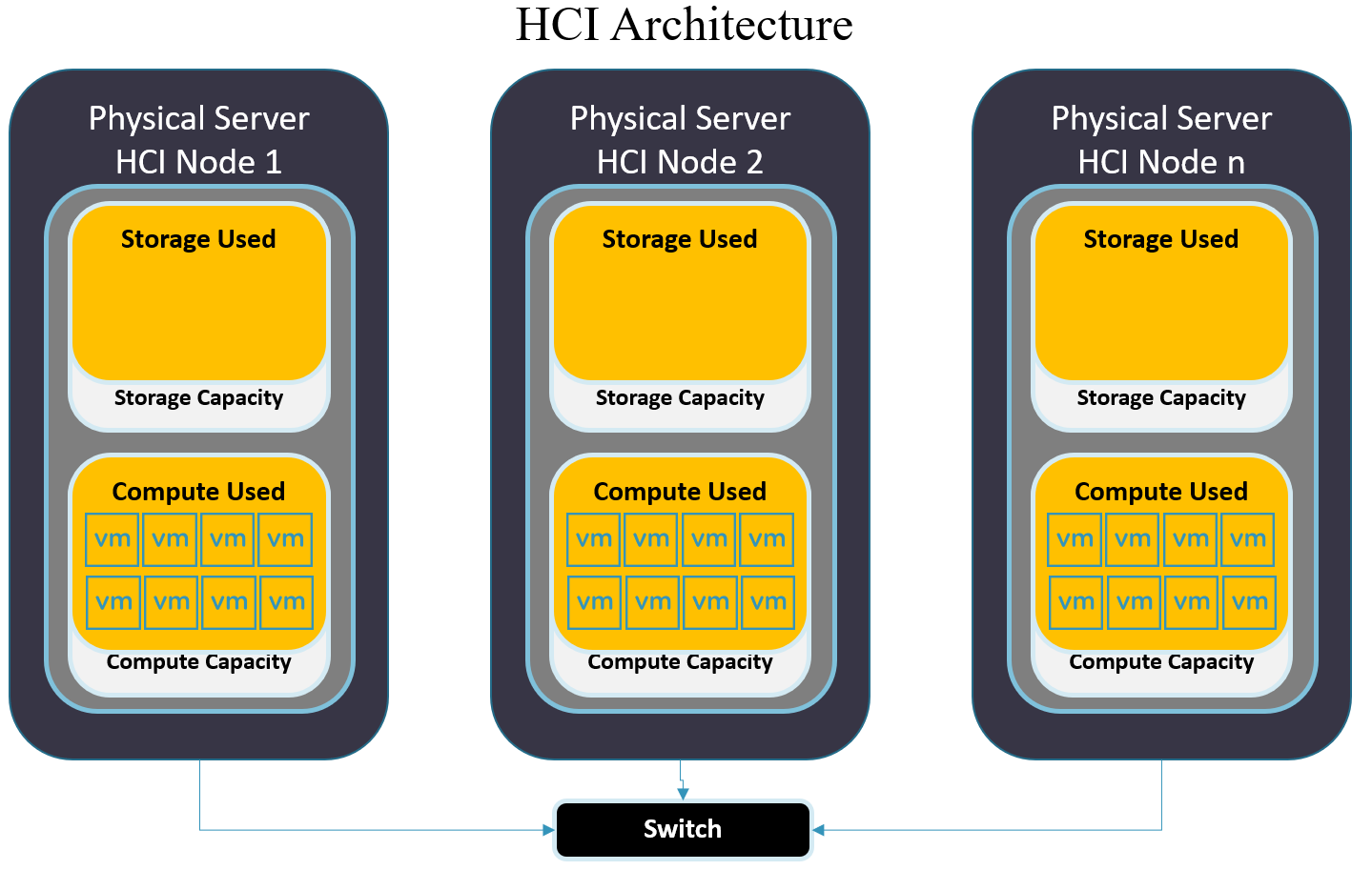 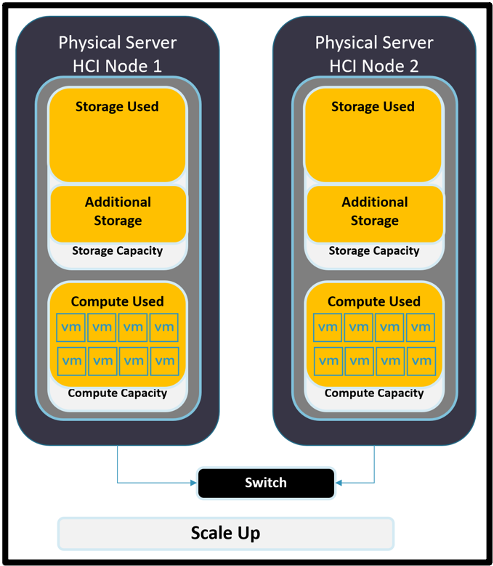 To meet the demands of the video surveillance market, StarWind has partnered with best-of-breed vendors, leveraging hardware from Dell, Supermicro, Intel Optane, Mellanox, and Nvidia. StarWind has taken these systems and built them up using best practices from leaders in video surveillance and analytics – including Milestone, Genetec, Bosch Security Systems, and Briefcam – to create an affordable HCA that can be deployed in a wide variety of locations. 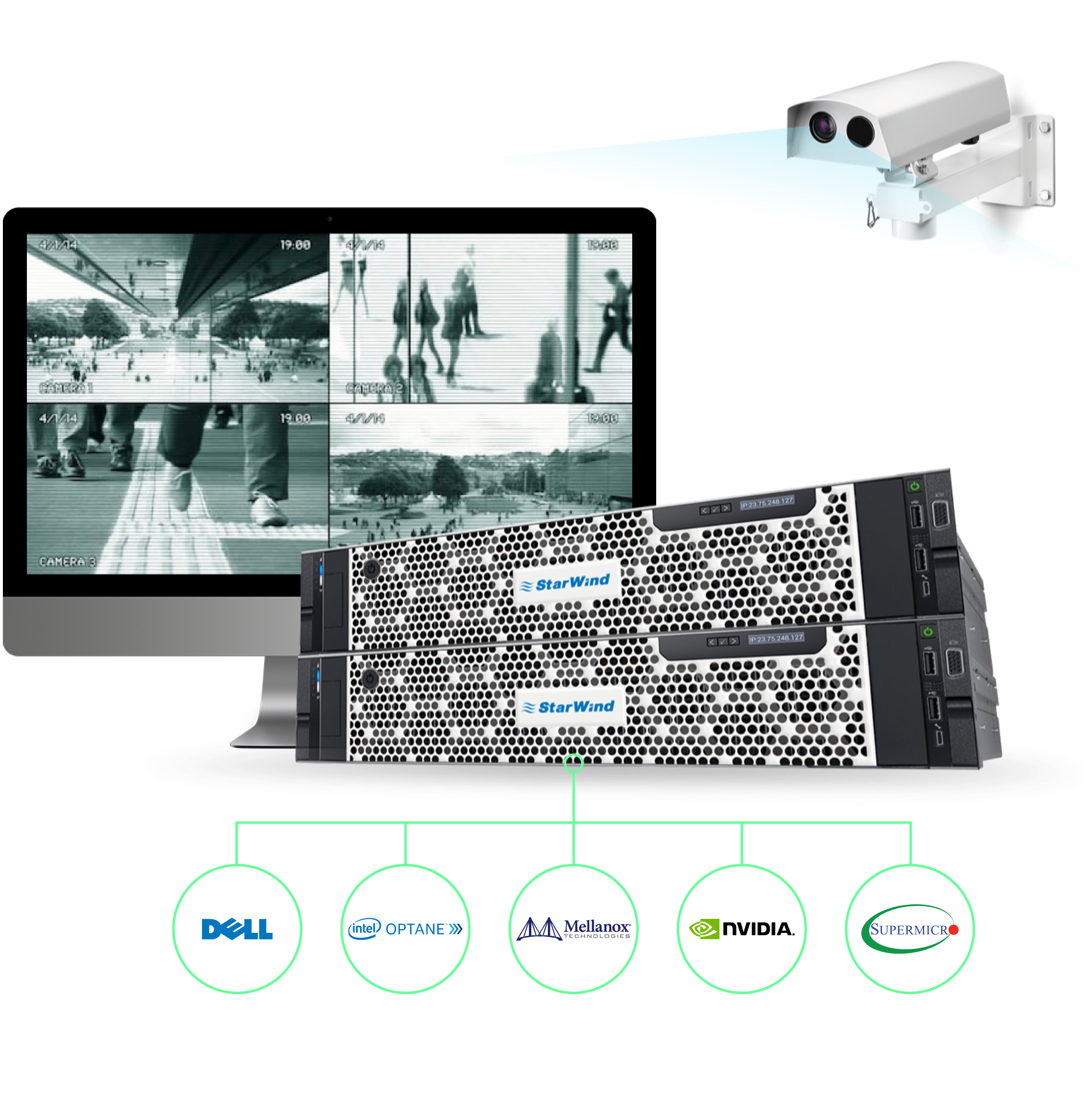 In all, we counted 18 different pre-defined HCA configurations offered by StarWind. This equates to a faster deployment time and assurance that customers get the exact solution they need, not a generic solution based on a limited number of server options. The solution that you get from StarWind is based on the number of cameras that you need to support, video retention time, and whether or not you need video analytics. These solutions use either vSphere or Windows Server 2019 or 2016 for the hypervisor.

The HCAs that StarWind offers range from systems that support a minimal number of video cameras to ones that support 250. For those who need to monitor smaller environments, StarWind has an HCA that supports up to 50 cameras with recording retention of seven days without any analytics capabilities. This HCA is composed of two 2U servers with dual Intel Xeon Silver 4210R 2.4GHz processors, 128GB of RAM, 3.84TB of hot storage, and 24TB of archive capacity storage.

On the upper end, StarWind has an HCA that supports up to 250 cameras with a recording retention of 30 days, and with the ability to analyze up to 100 cameras in real-time or 4000 hours of video per day. This HCA is also composed of three 2U servers with dual Intel Xeon Gold 6258R 2.7GHz processors, 1536TB of RAM, 15.36TB of hot storage, 477TB of archive capacity storage, and two NVidia RTX 6000 GPUs.

Regardless of the HCA, each of StarWind’s HCAs features a StarWind SDS Engine that builds highly available shared storage over the direct-attached flash to fit the high-demand SLA teams. StarWind’s HCA configurations use flash for primary application storage (in video surveillance HCA models archive storage is built on HDDs) and have fault-tolerant storage and networking, as well as built-in high availability (HA). In order to ensure success, all HCAs come with StarWind ProActive Services to prevent unplanned downtime, as well as StarWind Command Center which was needed to simplify platform management.

ProActive Premium Support is a 24/7/365 healthcare monitoring service for StarWind’s HCAs which helps to prevent issues from occurring by automatically creating a support ticket when it spots a “failure pattern,” or gets an error message. A service like this is invaluable to companies that deploy critical technology to sites that have limited support staff.

StarWind Command Center allows you to view your HCA from a single HTML5-based UI. It is used to manage and modify your VMs, clusters, networks, compute, and storage. It even allows you to collect support information in just a few clicks if you need to open a support call. 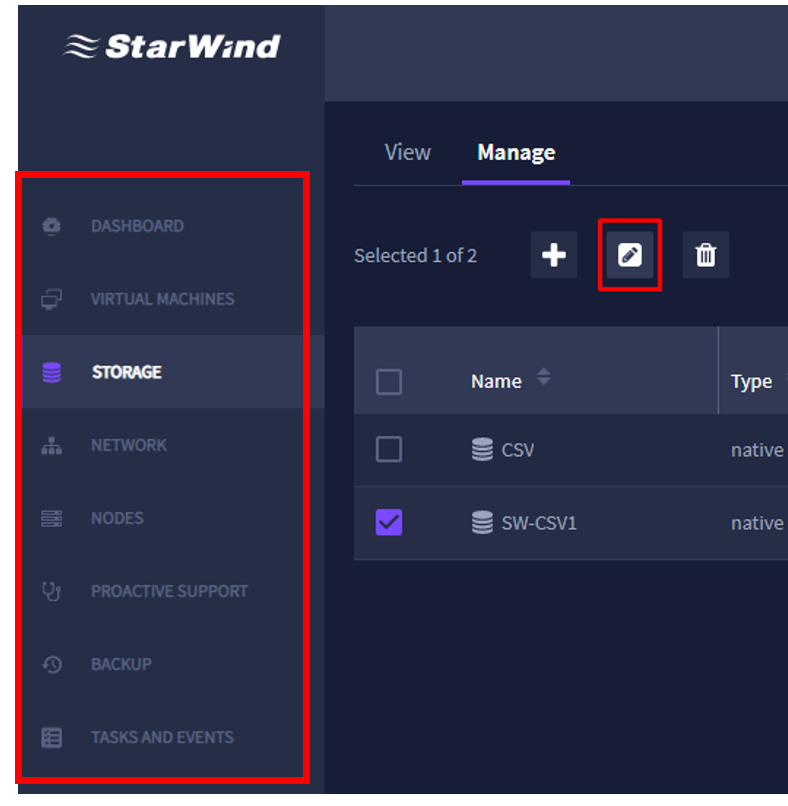 StarWind Command Center is deployed as a virtual appliance and supports Hyper-V, Azure, and VMware vSphere virtualization environments. It does not require an agent.

Below are some of the functions that the Command Center is capable of.

From the Node Manage view, you can perform routine maintenance and power management, and access node consoles.

The Virtual Machines screen shows a summary of the VM, including its resource usage, performance, tasks, and events.

Under Network, you can see virtual switches, cluster networks, and NICs.

The Storage tab allows you to view and manage your storage system, including the ability to create new volumes.

Basically, Command Center provides a layer of abstraction that makes it extremely easy to manage a StarWind HCA. This shows how StarWind has targeted the product at integrators in the security space as it gives them a reliable platform that they can configure and easily manage. Command Center allows the integrator to focus on the security aspects of the solution they deliver to the customer, while StarWind provides a reliable server foundation for their solutions.

To better understand how the HCA operates, we first looked at StarWind Virtual SAN (VSAN). VSAN is a software storage solution that uses the network to mirror the internal SSD disks on the physical nodes to create a pool of storage and then share it via iSCSI. By using iSCSI as the protocol, it avoids the expensive trap that other SDS solutions have in which the storage can only be used by licensed nodes in the SDS cluster. VSAN does synchronous replication between nodes to ensure instantaneous failover should a node go down, and claims to have up to 99.9999% uptime.

A VSAN cluster can start with as few as two nodes, with the option to add additional nodes as the need for storage and compute grows. VSAN is relatively agnostic with regards to which hypervisor it supports, including Microsoft Hyper-V and VMware vSphere.

Two-node clusters are attractive, as they not only save the cost of having to purchase an additional physical node and the OS and software for it, but also the cost for the switch to interconnect them.

One of the questions we did have was how StarWind could have a two-node HA cluster, as most other HA solutions require three nodes. The answer is that StarWind uses an internal mechanism to sync data and provide a heartbeat across those two nodes, and thus does not need a third host to act as a witness and run as a tiebreaker. For their two-node configuration, StarWind recommends using a direct connection for the synchronization and iSCSI channels, but redundant network switches can be used if desired. Where nodes can’t be connected with a redundant network, StarWind also supports a traditional witness that can run on any Windows machine or cloud instance. The witness doesn’t need to be as powerful as the other nodes, as it doesn’t keep a copy of the stored data. Of course, you will still need switched networking to support the functions of the hypervisor running on the nodes.

The diagram below from StarWind shows an all-flash two-node topology that can support 250,000 IOPS. 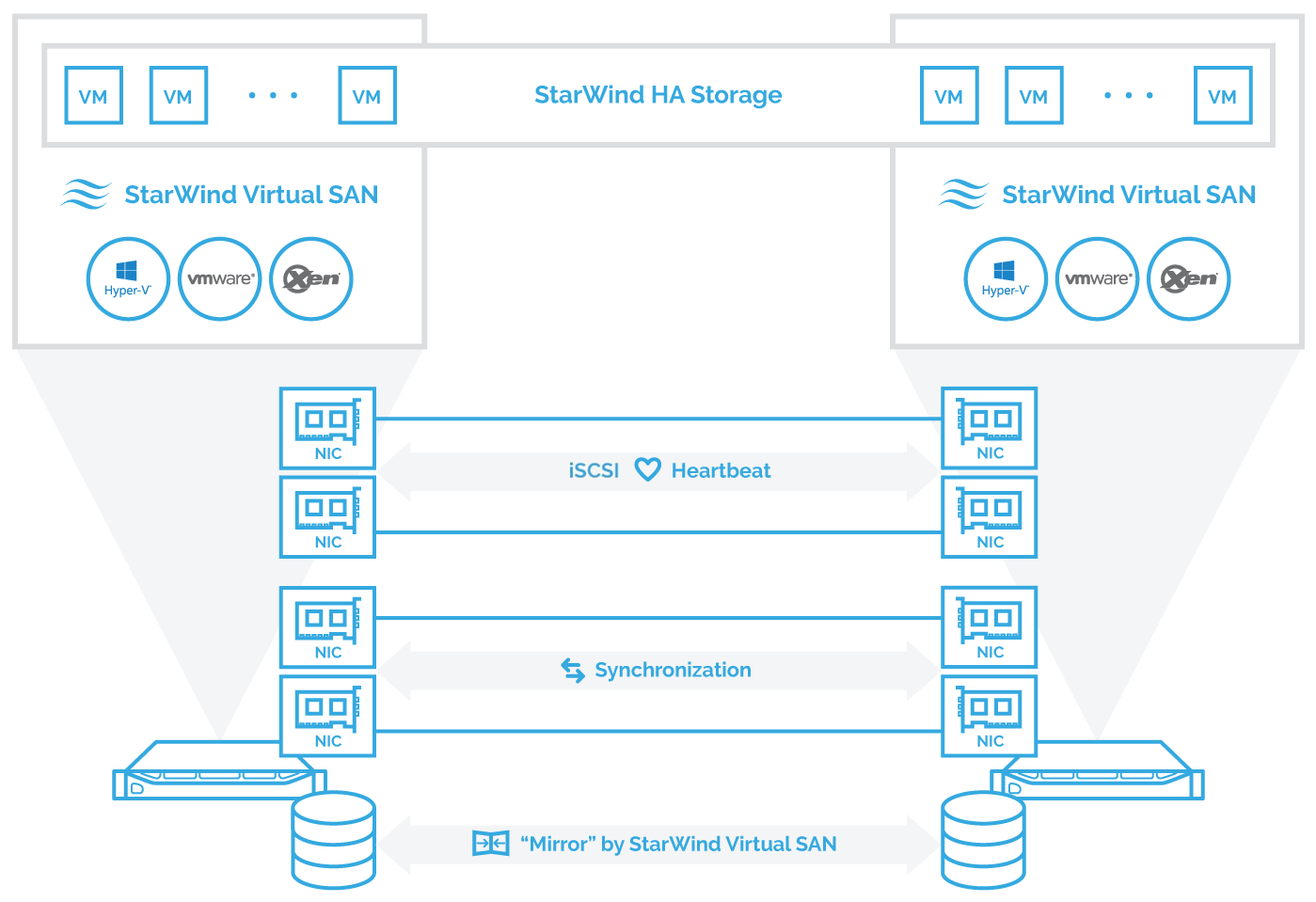 StarWind also has a diagram that shows a three-node topology. You can see that in this scenario, StarWind shows direct network connections between the nodes. 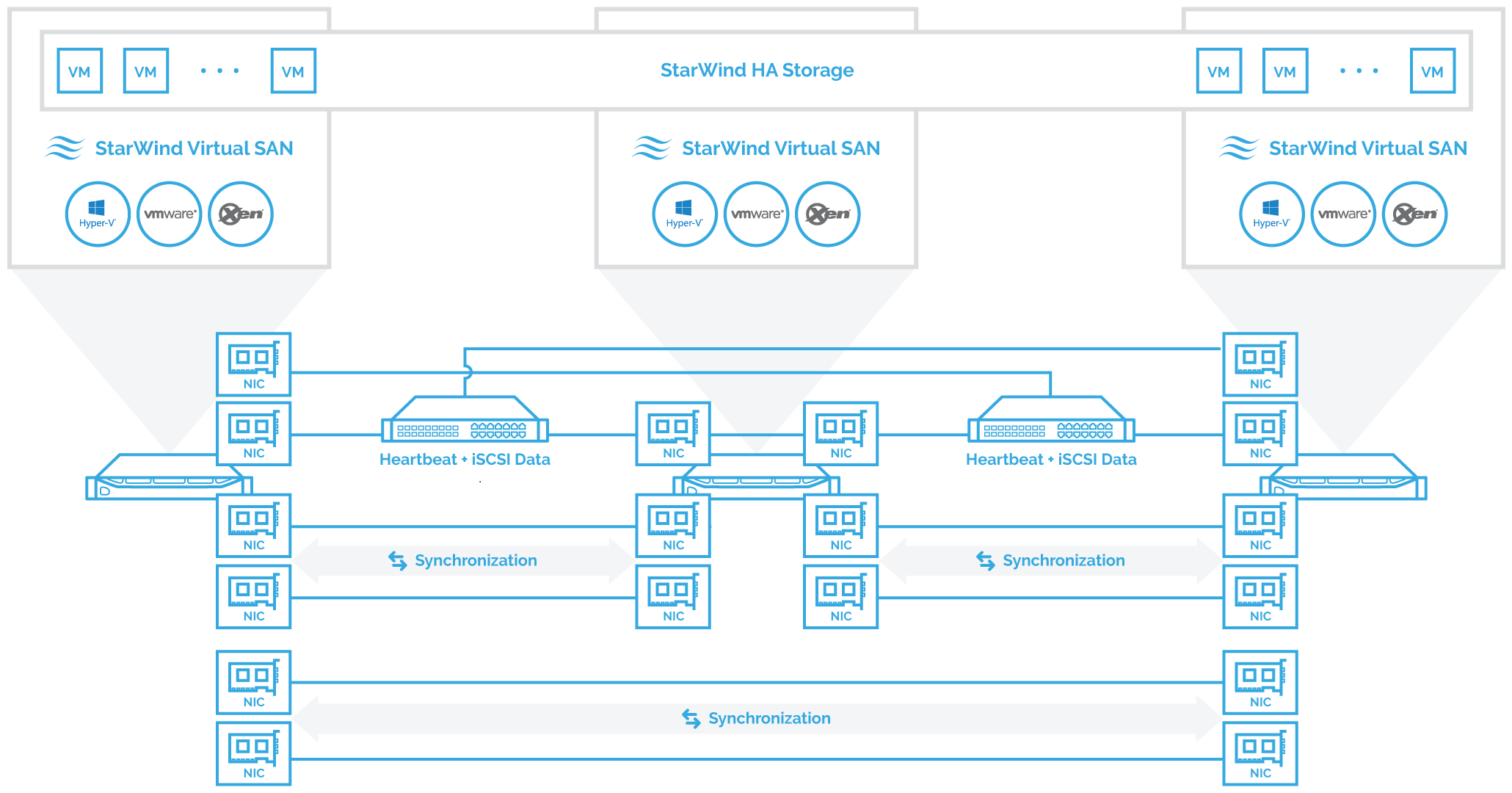 As more and more physical locations need video surveillance to protect from theft, vandalism, and other unwanted actions, the organizations tasked with monitoring them need a way to quickly deploy and then maintain the solutions used for them. This is the reason that it is a 25 billion USD market, and one that’s expected to grow to $44 billion by 2025. This is the exact market that StarWind has targeted for HCA.

By coupling their award-winning software-defined storage solution (StarWind Virtual SAN) with best-of-breed software and all-flash hardware, and then including a bespoken HCA management console and 24/7 support, StarWind provides a purpose-built, cost-effective platform for building physical security solutions for transportation, manufacturing, and retail.

This report is sponsored by StarWind Software Inc. All views and opinions expressed in this report are based on our unbiased view of the product(s) under consideration