Testing enterprise hardware and software requires an evaluation platform beyond consumer desktops. StorageReview understands that companies want hardware they send out for review tested in the same environment they are positioning it for and to that end we have deployed a pair of Lenovo ThinkServer RD240’s for enterprise reviews. The RD240 is a 2U rack-mountable server that is designed for larger business tasks; however, its price is targeted for small and medium businesses (SMBs) making it a smart choice for businesses looking for low cost alternatives but want to maintain high levels of data protection at the same time. The RD240 gives several levels of advanced data protection, inducing RAID data cache and available battery backup and low-cost storage. This ThinkServer is no slouch though, as its powered by two Intel Xeon X5650 processors and packed with SAS/SATA 6.0Gb/s gear from LSI.

Testing enterprise hardware and software requires an evaluation platform beyond consumer desktops. StorageReview understands that companies want hardware they send out for review tested in the same environment they are positioning it for and to that end we have deployed a pair of Lenovo ThinkServer RD240’s for enterprise reviews. The RD240 is a 2U rack-mountable server that is designed for larger business tasks; however, its price is targeted for small and medium businesses (SMBs) making it a smart choice for businesses looking for low cost alternatives but want to maintain high levels of data protection at the same time. The RD240 gives several levels of advanced data protection, inducing RAID data cache and available battery backup and low-cost storage. This ThinkServer is no slouch though, as its powered by two Intel Xeon X5650 processors and packed with SAS/SATA 6.0Gb/s gear from LSI.

In today’s corporate world, organizations and business are continuously looking for ways to streamline their operations and to reduce costs, all the while maintaining strict performance standards and requirements. This makes Lenovo’s ThinkServer RD240 a very attractive solution. Powered by Intel’s latest Xeon processors, the RD240 offers up to 60% faster performance compared to its predecessors and is available in several configurations. The RD240 supports up to 64 GB RAM, two Intel Xeon processors, and up to eight SAS or SATA drives. The ThinkServer RD240 is built for Intel’s hardware-based virtualization technology, unlike its predecessor, the TS200v. For number crunching the RD240 can be built with up to two Intel Xeon (dual, quad, or hex) core processors and up to eight single-rank or dual-rank 1333 MHz DDR3 DIMMs. It also offers redundant power supplies; allowing one to be swapped out without taking the server out of production status.

In terms of its configuration here at StorageReview, we customized the ThinkServer RD240 with our own equipment, including an LSI MegaRAID 9260-8i for RAID testing and a 9211-8i HBA for single drive benchmarks. With eight 3.5 or 2.5-inch drives through front-mounted hot-swap bays, the RD240 supports a wide variety of storage configurations. We will be testing equipment through the ThinkServer RD240 at StorageReview, supplying reliable and dependable results for our enterprise SSD and hard drive reviews. This platform will also be turned to for our RAID and PCIe SSD reviews, as well as upcoming 10Gb and 40Gb Ethernet coverage.

The LSI MegaRAID 9260-8i SAS 6Gbps controller features a compact PowerPC RAID-on-Chip controller, 512mb of DDR2 cache, a PCIe 2.0 x8 slot, and SAS/SATA 6Gbps connectivity. SAS 6 Gbps is the latest version of the SAS and provides up to 6.0Gb/s in serial data transfer bandwidth. The LSI 9260-8i is a SATA 3 internal RAID card that gives users the option to connect up to 8 hard drives or SSDs directly in a variety of multi-level RAID configurations, including RAID 0, 1, 5, 6, 10, 50 and 60.

The LSI SAS 9211-8i is a reasonably inexpensive low-profile controller, and though it doesn’t have cache, it does support RAID levels 0, 1, and 10 on its eight 6.0Gb/s ports. The LSI SAS 9211-8i host bus adapter provides throughput to internal server storage arrays through its eight internal 6Gb/s ports, with up to 256 SAS and SATA physical devices. This host bus adapter offers dynamic SAS functionality including dual-port drive redundancy and SATA compatibility.

Relatively speaking, the metal chassis of the Lenovo ThinkServer RD240 is fairly sturdy and rugged weighing quite a bit once you have it stocked full of hard drives and equipment. Lenovo includes rails for rack mounting, for which the RD240 takes up a standard 2U height once installed.

On the front panel, you will find eight drive bays, which are fairly easy to access and install; there are four on the left and the optical drive is grouped with the four remaining bays on the right. Further to the right is the control panel, which consists of the ID button, three LED status indicators (System, Ethernet port #1, and Ethernet port #2) and the power. These indicate that the ID function is active by the color shown. When the system status LED is off, it means that the system is normal; however when the LED turns red, as there could be a fan, voltage, or temperature issue. A green Ethernet status LED color signifies that the LAN is connected; if blinking, data is being transferred. There are 2 USB 2.0 located at the far left of the panel.

The rear view of Lenovo’s ThinkServer RD240 reveals a decent amount of connectivity options which also varies depending on which PCIe cards you have installed. The two power supplies (which are covered by a bay bezel if vacant) are located on the far left of the rear panel, as well as the power cord connector. As you can see, they can be easily installed or removed with their protruding handles. Located at the middle of the panel, you will find array of connection ports including four additional USB 2.0 ports that surround the VGA and Serial ports. Next to them lie two Ethernet connectors. To the far right, you will find three PCI Express expansion slots. 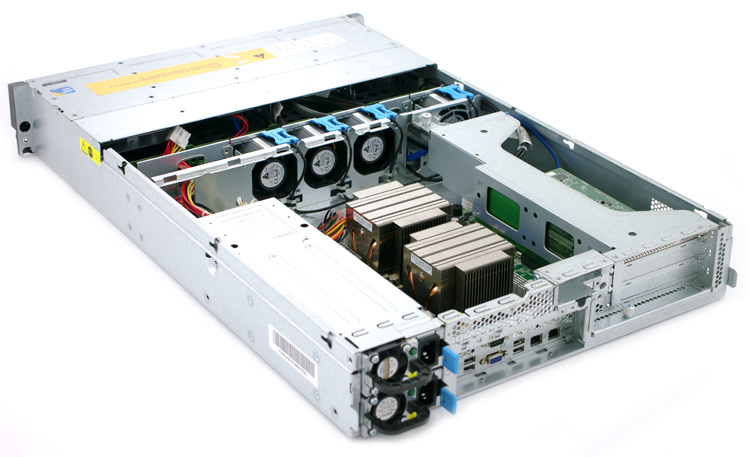 When you open up the RD240, you will notice that there are four system fans to keep system thermals in check. The fans pull air from the front, drawing cool air over the drive bays and push air over the PCIe cards as well as the RAM and CPUs. There are 8 available memory module slots which are divided between each CPU, which in our configuration have one slot populated per CPU.

The need for an enterprise testing platform was obvious once we started testing high-performance enterprise storage equipment. Consumer hardware is far underpowered compared to most servers, and the enterprise environment generally lags behind consumer chipsets for with longer validation cycles, meaning that test results won’t align not to mention software platforms are different. We also needed a seperate system to divide up testing regimens, since our process for reviewing a consumer product is completely different to our approach and review process when testing enterprise hardware.

In our Enterprise Testing Environment, we interface through our ThinkServer RD240 over remote desktop with the system quietly humming away in our lab. This system is designed for testing and only testing so no background activities will impact benchmark results. Results are pulled off on a nightly basis and stored on our on-site backup system for safe keeping. 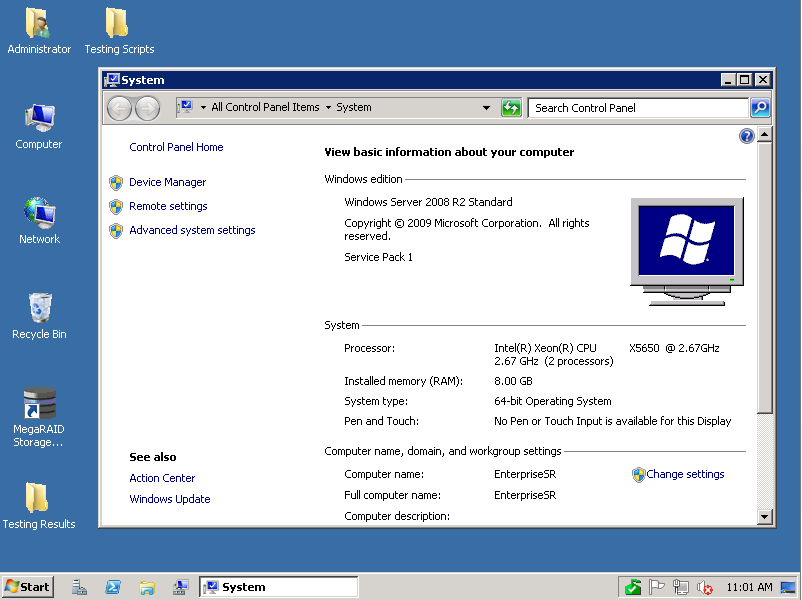 From the factory our RD240 was designed to handle all storage tasks through an add-on LSI RAID card interfaced with the 8-drive backplane. The only other powered storage device present was a slim optical drive for loading software. To install Windows Server 2008 R2 in a way that wouldn’t be distrupted regardless of the additional hardware swapped into the server for testing, we used a ThinkPad secondary SATA adapter in place of the optical drive. This gave us power and on-board Intel SATA to our Intel SSD 320 using supplied internal cabling without needing to modify the chassis. This freed up space that would have been otherwise used by the SSD in one of the eight hot-swap bays and didn’t lock us in to a particular RAID card for day-to-day activites. 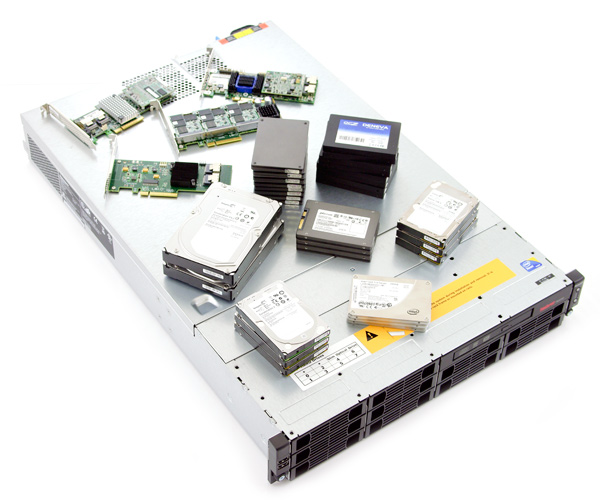 At the end of the day the reason to divide testing platforms was obvious; each type of review had different testing and hardware requirements and we wanted the best of both worlds. By transitioning to this new platform we no longer tie up our consumer testing rig longer enterprise tests and we can now start rolling out more meaningful tests in the enterprise market.