We’ve already looked at the Intel SSD 520 a few different ways in our client SSD 520 review and enterprise SSD 520 review. Additionally though, with the superb performance and Intel’s reputation for SSD reliability, there’s potential for the SSD 520 to be offered by notebook and desktop OEMs as a performance upgrade for buyers configuring those systems. Users may also evaluate the Intel SSD 520 for RAID deployments, with the goal of leveraging speed and/or redundancy. To that end, in this review we’re working with the 240GB SSD 520 in several client-focused scenarios including single drive, RAID0 with two Intel 520s, RAID0 with three 520s and RAID5 with three 520s.

We’ve already looked at the Intel SSD 520 a few different ways in our client SSD 520 review and enterprise SSD 520 review. Additionally though, with the superb performance and Intel’s reputation for SSD reliability, there’s potential for the SSD 520 to be offered by notebook and desktop OEMs as a performance upgrade for buyers configuring those systems. Users may also evaluate the Intel SSD 520 for RAID deployments, with the goal of leveraging speed and/or redundancy. To that end, in this review we’re working with the 240GB SSD 520 in several client-focused scenarios including single drive, RAID0 with two Intel 520s, RAID0 with three 520s and RAID5 with three 520s. 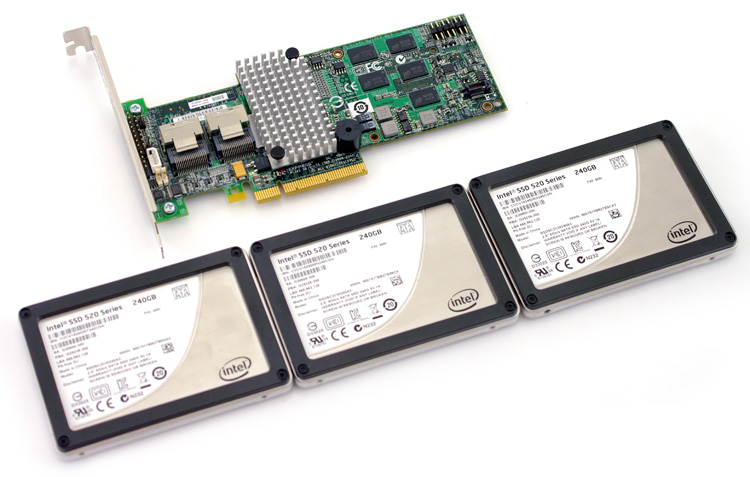 The reasons for using at least a pair of SSDs in RAID are many; the performance gains are generally impressive and at times, the cost of two lower capacity drives is less than a single higher capacity drive. Additionally, the 480GB Intel SSD 520 is quoted as having slower speeds than the 240GB model, meaning that buyers can get even higher performance by using two 240GB SSDs versus buying a single 480GB model.

After reviewing the Intel SSD 520 as a single drive, we noted exceptional performance across the board, trading places with the OCZ Vertex 3 Max IOPS constantly for fastest consumer SSD. Moving into a RAID setup we wanted to see how performance would ramp up depending on how we configured our set of three drives. Our testing environment consists of a Lenovo ThinkServer RD240 using a LSI MegaRAID 9260-8i for RAID. Our standard RAID configuration includes a 128K stripe size, write back enabled, read ahead, as well as drive cache enabled.

Next we look at random access speed with the same 2MB transfer size in IOMeter.

Our next group of tests switches to smaller 4K transfers, which are the bread and butter of flash storage. With no moving parts to slow them down, SSDs are able to blow hard drives out of the water in random access speeds. One should also note that in many RAID configurations, stripe size will have an impact on performance.

Compared to a single-drive configuration, at a queue depth of 1 the RAID configurations didn’t score higher in 4K random read or write at lower queue depths. With the increased parity calculations the RAID5 configuration came in last, measuring 4,577 IOPS read and 13,310 IOPS write compared to 7,589 read and 20,473 IOPS write of a single SSD.

Given the weaker 4K write RAID speeds at a queue depth of 1, it wasn’t a huge surprise to see the drive come in weaker in our latency test compared to a single drive. The RAID configurations scored 0.054ms, 0.542ms and 0.075ms for the RAID0, RAID0x3, and RAID5 configurations respectively. What was surprising though were the exceptionally low max response times, each hovering between 29.7 and 32.34ms 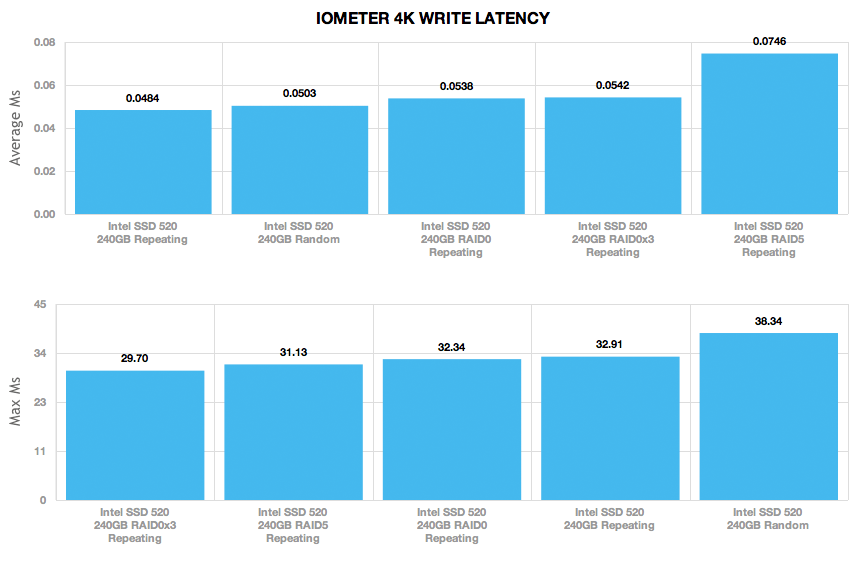 Our last section of synthetic benchmarks looks at the performance of the Intel SSD 520 in a mixed workload business environment. The SSD 520s in RAID0 configurations stayed at the top of the pack, offering a good boost over a single SSD 520 at higher queue depths. The area where RAID had the greatest strength was seen in our webserver profile, where the RAID5 configuration won out. 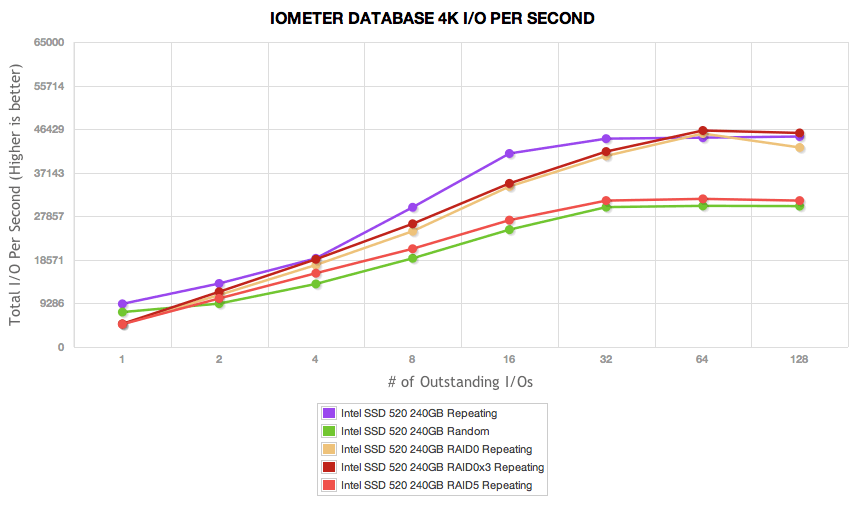 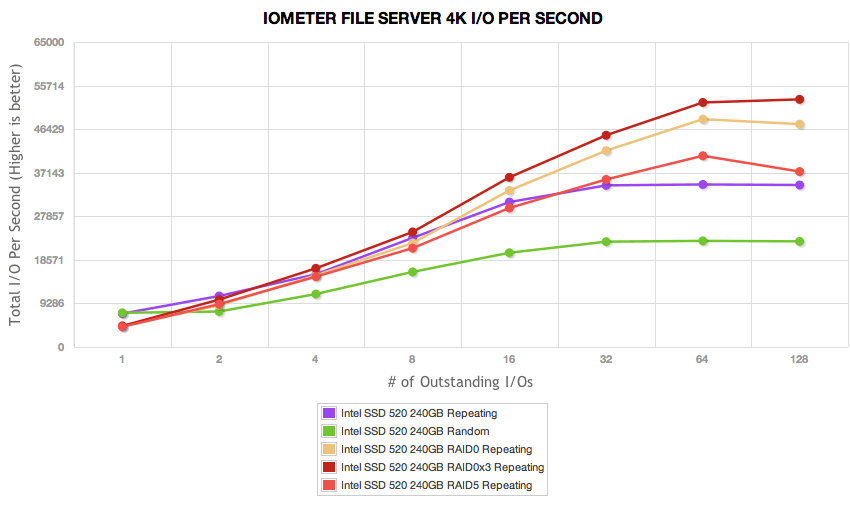 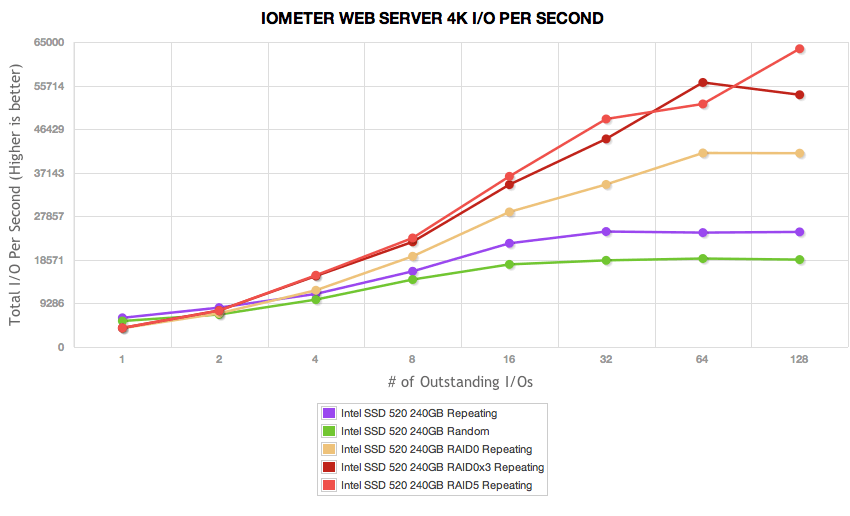 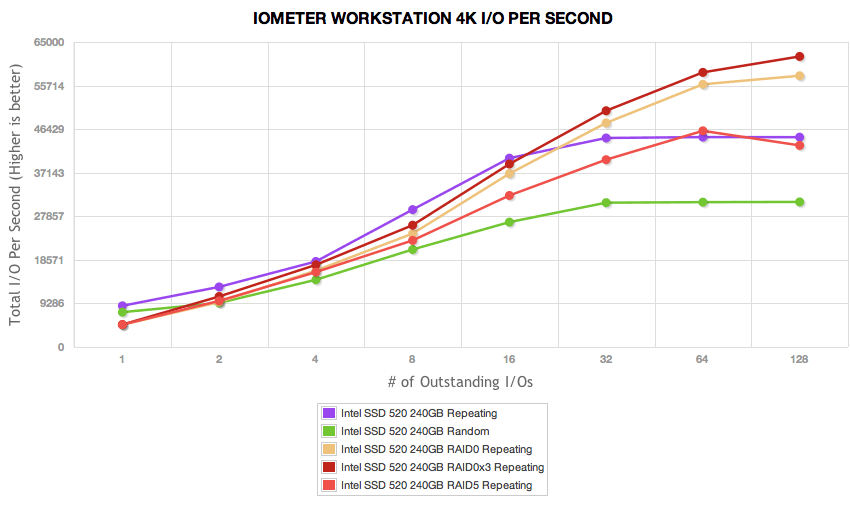 As we mentioned at the start of this review, we were interested to see how these new Intel SSD 520s perform in RAID0 in a notebook environment. To test this configuration we turned to our trusty Lenovo ThinkPad W520 and used its dual 2.5-inch hard drive bays and SATA 6Gb/s support. To keep performance data consistent with other drives also benchmarked on this system, we maintained the same clone image across the pair of Intel SSD 520’s as well. We used FutureMark PCMark Vantage for this comparison. 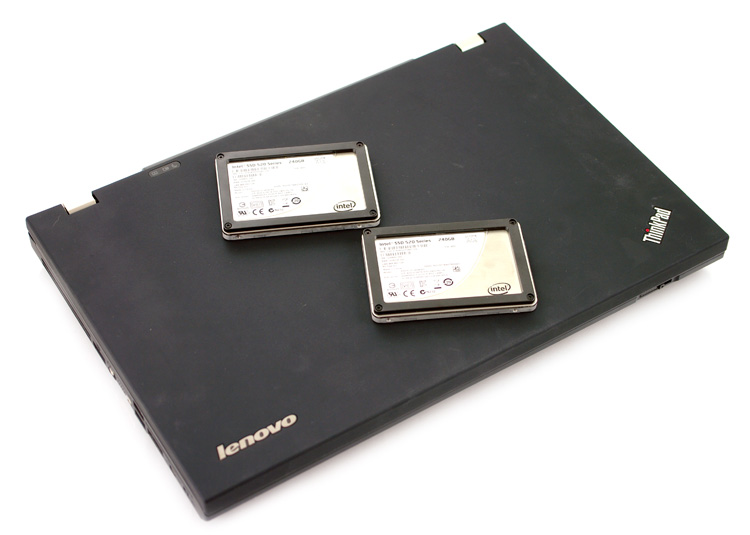 Our Lenovo ThinkPad W520 has the following performance configuration:

Looking at overall PCMark Vantage performance, the Intel SSD 520 scored the highest on our chart, coming in above the previous generation SSD 510 in our chart. When breaking down by fastest PCMark Vantage score though, as you can see below it didn’t win out above the Crucial C300 in RAID0.

We’ve given the Intel SSD 520 an Editor’s Choice award for good reason. While we greatly value Intel’s reputation and tradition of reliability and compatibility in the SSD space, the SSD 520 is a wonderful performer as well, generally finding itself in the top spot or two throughout our single drive review. When considering using an SSD in RAID environment where stability is crucial, the blend of reliability and performance the SSD 520 offers is top notch.

The SSD 520 delivered well in overall system performance when tested in RAID0 in our ThinkPad W520. In a desktop or workstation environment, the SandForce SF-2200 processor delivers excellent large-block transfer speeds and great high I/O read performance as seen in our webserver profile. While performance didn’t scale at a perfect 2x rate, combining two 240GB SSD 520s will show clear gains over the 480GB model which listed as having slower random 4K write and sequential write speeds than the 240GB capacity. For buyers that already have a RAID card or on-board RAID capabilities, pairing or tripling up the Intel SSD 520 makes sense from a performance perspective.

The only complaint really, which apply to many SSDs in RAID, is that to see higher performance in everyday use you need to perform highly-threaded activities. We didn’t see a huge difference in speed comparing the RAID configurations to single drives at lower queue depths with small random transfers. So if you don’t do much activity at higher queue depths, you would probably be better off with a single SSD.

Overall the Intel SSD 520 offered great performance in both single and multi-drive configurations. To pick the best setup for your unique configuration, you really need to look at the workload you intend to run. If your profile matches something RAID can speed up, adding in a second or third SSD to both increase performance and capacity can make a great deal of sense. Although even with the increased reliability from Intel’s internal testing, don’t neglect to make regular backups in the unlikely event a drive fails.