The Supermicro 1023US-TR4 is a 1U server designed for organizations looking for a high-end solution in environments that can benefit from dense compute power like virtualization and cloud computing. The 1024US-TR4 comes equipped with an H11DSU-iN motherboard, which features dual-socket support for AMD EPYC series processors and up to 8TB Registered ECC DDR4 3200MHz SDRAM via its 32 DIMM slots.

The Supermicro 1023US-TR4 is a 1U server designed for organizations looking for a high-end solution in environments that can benefit from dense compute power like virtualization and cloud computing. The 1024US-TR4 comes equipped with an H11DSU-iN motherboard, which features dual-socket support for AMD EPYC series processors and up to 8TB Registered ECC DDR4 3200MHz SDRAM via its 32 DIMM slots.

The EPYC 7002 CPUs are clearly a good choice for this server, as this performance-driven CPU is specifically designed for enterprise applications, virtualized and cloud computing environments, software-defined infrastructure, high-performance computing, and data analytic applications. The CPUs are also a significant upgrade from previous models, as we’re seeing them simply dominate performance benchmarks across many systems in our data center. 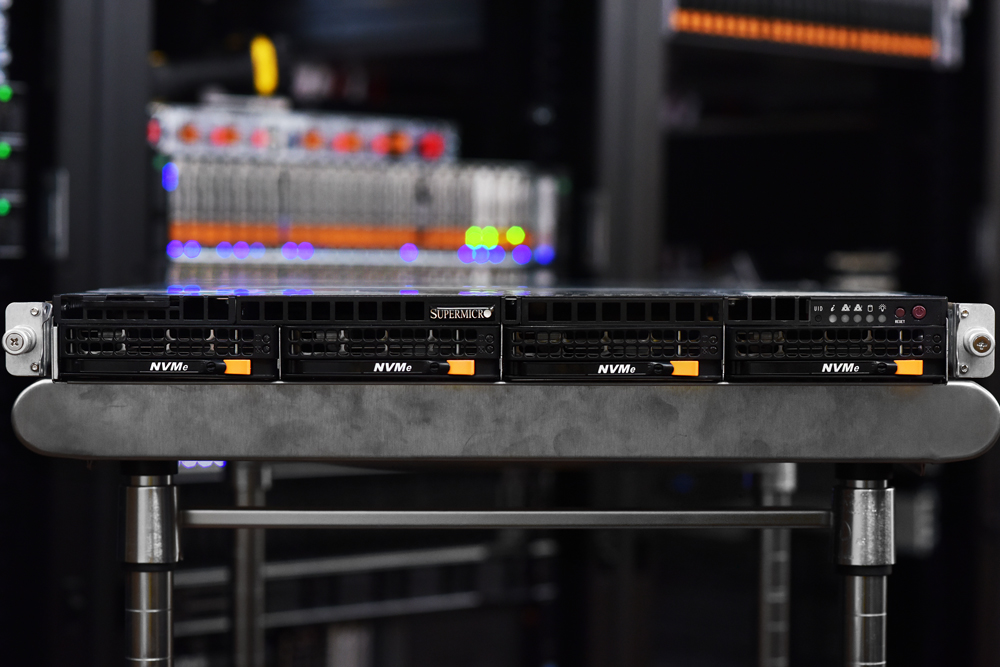 Storage-wise, the Supermicro 1023US-TR4 features four 3.5″ Hot-swap drive bays that can be outfitted with SATA, SAS, or NVMe. The combo of 3.5″ bays and NVMe is a bit curious, but Supermicro has a tendency to create interesting/flexible system builds.  In this case, Supermicro is assuming users may want to combine some mix of high-speed flash and HDDs, or they simply offered it in a 3.5″ NVMe SSD configuration because they can. That’s good enough for us. They do offer a more dense 1U NVMe platform in the 1124US-TNRP, which offers a dozen 2.5″ NVMe bays. Both systems are part of Supermicro’s A+ Ultra family. Users can also add up to two M.2 SSDs for boot drives depending on PCIe riser configuration, in either SATA or NVMe variants.

Supermicro uses four Gigabit LAN ports via an Intel i350AM4 on board and features four expansion card slots via PCI-E x16 (two FH / 9.5″L) and PCI-E x8 (one LP, and one internal proprietary LP slot). Connectivity also includes an RJ45-dedicated IPMI LAN port, three USB 3.0 ports (one of which is Type A), and a VGA port. In addition, the 1023US-TR4 uses 1000W with PMBus in redundant PSUs to power the server.

The 1023US-TR4 is a 1U server designed for dense applications. Like most Supermicro servers, it also uses a tool-less rail system design. The chassis can be mounted into the server rack without much effort, as each end of the outer rail has a bracket with square pegs that easily snap into the server rack’s mounting holes. 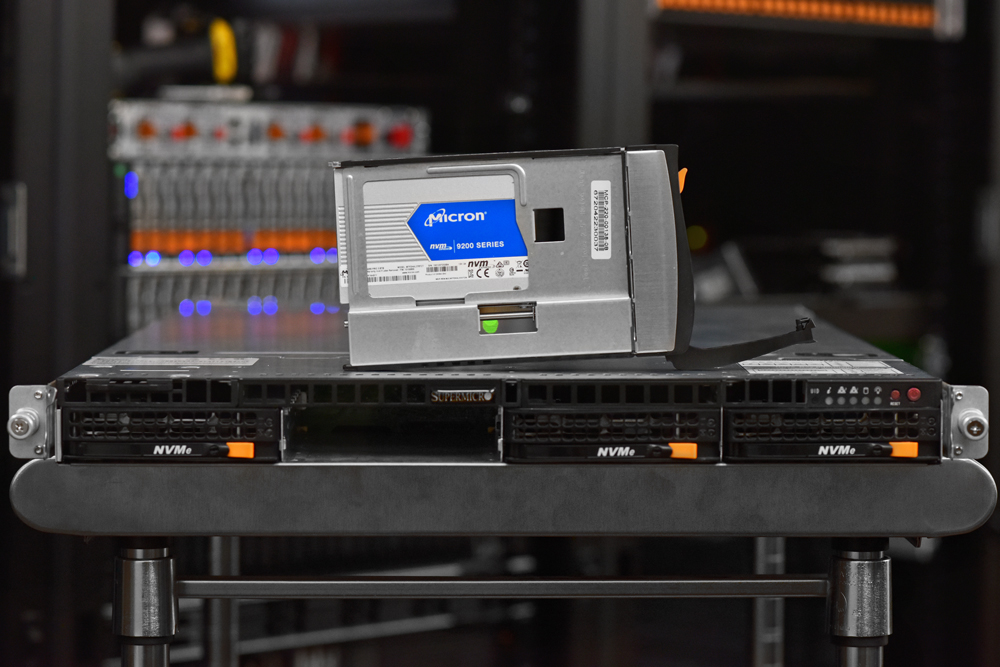 The front of the server features a control panel on the right, which has a power on/off and reset button, and six LEDs: Power, HDD, 2x NIC, information status, and UID indicators. Connectivity on the front includes two USB 2.0 ports. The four hot-swap 3.5-inch bays take up the rest of the server real estate, which feature support for SATA, NVME and SAS drives. In addition, there is an optical drive option available for those who need it, which would be added next to the service tag near the top left. 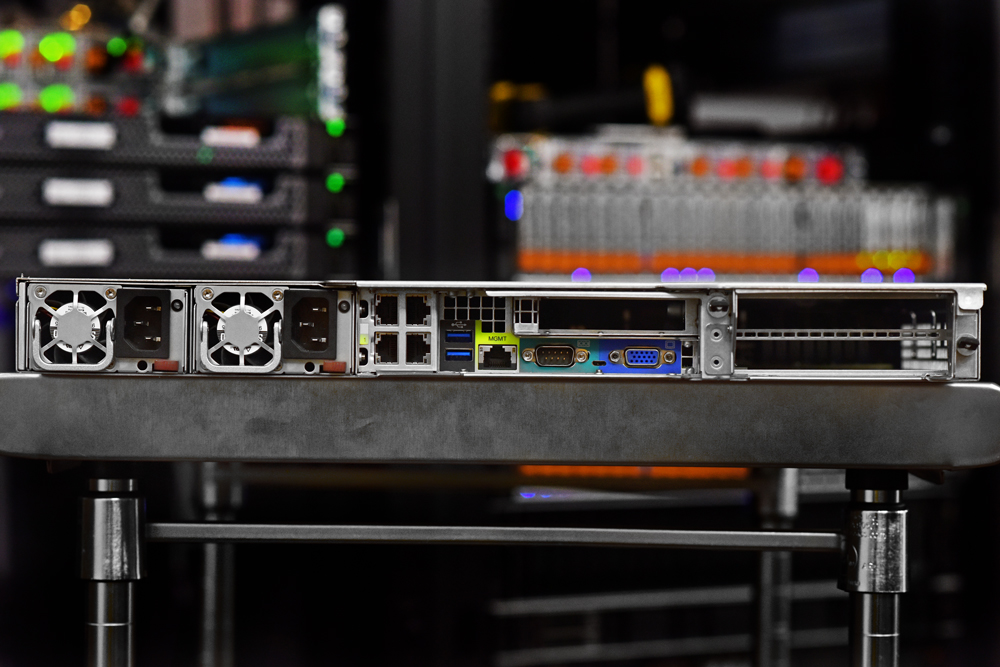 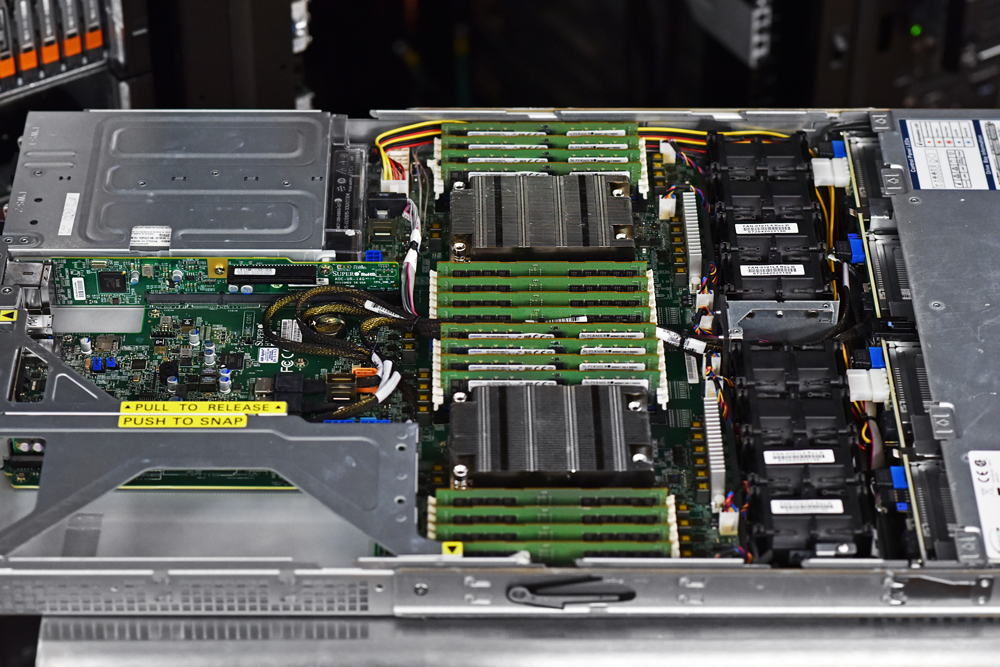 The server chassis has a removable top cover for access to the internal components. Simply press the two release buttons and slide the cover off towards the back of the server. Front and center, you will see the 32 DIMMs surrounding the dual EPYC 7200 series CPUs, which are behind the 8 internal fans that exhaust the heat out of the system. Toward the back of the motherboard resides that redundant 1000W titanium level PSUs. Overall, the 1023US-TR4 is well designed and there’s plenty of space for airflow to keep the system cool and running. 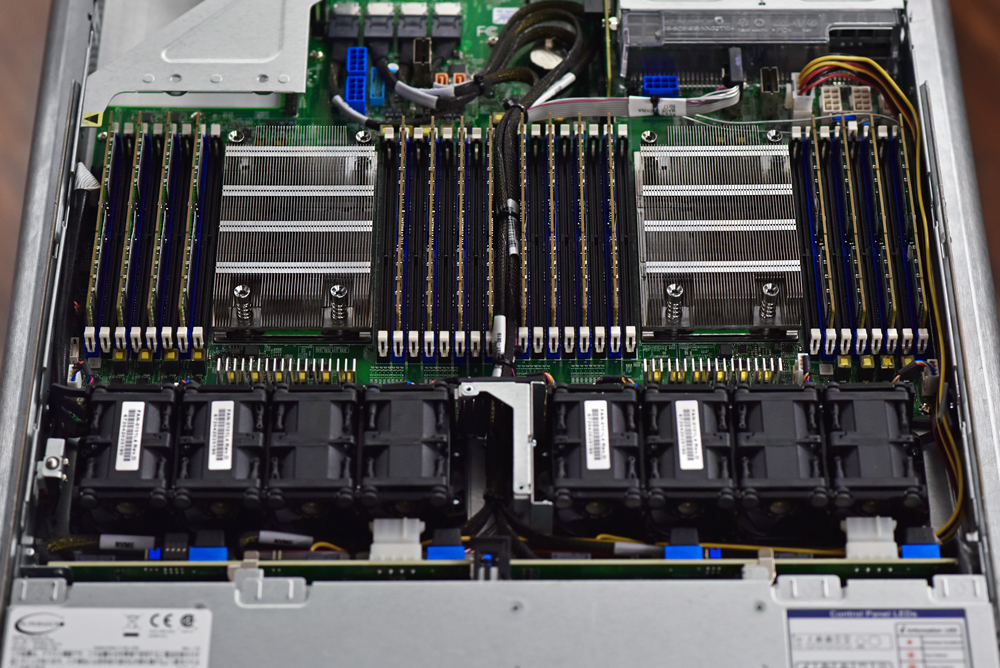 Supermicro provided us with a system block diagram as well. Here we can clearly see all the components and how they tie into each CPU. 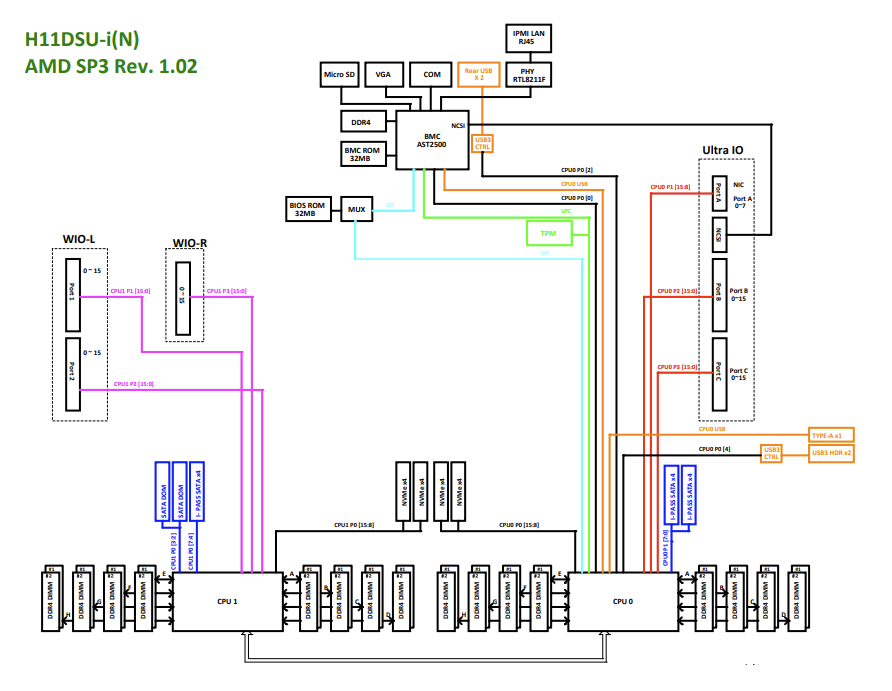 For SQL Server average latency the Supermicro 1023US-TR4 saw 1ms latency across the board and for an aggregate.

With Sysbench average latency we saw aggregate scores of 13.96ms for 8VMs and 18.2ms for 16VMs.

Next is sequential workloads. In 64K sequential read, the 1023US-TR4 showed sub-millisecond latency throughout with a peak of just under 200K IOPS (or 12.5GB/s) at 638μs.

The Supermicro SuperStorage 1023US-TR4 is designed for organizations who need a solution for their virtualization and Cloud-computing needs. For hardware, the server’s 1U form factor build supports dual-socket AMD EPYC 7001/7002 series processors, 8TB Registered ECC DDR4 3200MHz SDRAM via its 32 DIMM slots and can be outfitted with four NVMe/SAS/SATA drives via its four 3.5″ bays. Users also have the option to add up to two M.2 SSDs. For networking, the 1023US-TR4 uses four Gigabit LAN ports onboard and comes with four expansion slots for more cards and thus more flexibility. Onboard 10G would have been nice to see so high-speed Ethernet didn’t consume a PCIe slot though.

With our VDBench Workload Analysis, the server was populated with four Micron 9200 NVMe 3.84TB SSDs, mix-performance drives that are designed specifically for data center workloads. Here the Supermicro 1023US-TR4 had great results with peak highlights that include 2,910,410 IOPS for 4K read, 1,640,785 IOPS for 4K write, 12.5GB/s for 64k sequential read, and 8.49GB/s for 64k sequential write.

Overall, the Supermicro 1023US-TR4 is a 1U server that offers a lot of performance and flexibility inside its smaller form factor. Those looking for a denser solution might want to look at models like the 1124US-TNRP, which offers 12 hot-swap 2.5-inch bays in the same 1U form factor.