The Supermicro LSI SAS3008 HBAs (which share the same controller as the LSI 9300-8i HBAs) are engineered to deliver maximum performance. Delivering over a million IOPS and 6000+MB/s, the cards are designed to meet the growing demands of enterprises that require even more robust throughput in a range of applications that includes transactional databases, Web 2.0, data mining, and video streaming and editing. The LSI SAS 3008 controller supports 8 lanes of PCIe 3.0 and provides SATA/SAS links at rates between 3 and 12Gb/s and supports RAID 0, RAID 1 and RAID 10 in the IR version.

The Supermicro LSI SAS3008 HBAs (which share the same controller as the LSI 9300-8i HBAs) are engineered to deliver maximum performance. Delivering over a million IOPS and 6000+MB/s, the cards are designed to meet the growing demands of enterprises that require even more robust throughput in a range of applications that includes transactional databases, Web 2.0, data mining, and video streaming and editing. The LSI SAS 3008 controller supports 8 lanes of PCIe 3.0 and provides SATA/SAS links at rates between 3 and 12Gb/s and supports RAID 0, RAID 1 and RAID 10 in the IR version.

The new Supermicro HBA offerings are designed to enable the full potential of new 12Gb/s SAS SSDs that are already hitting the market, such as the Toshiba PX02SM Enterprise SSD and the HGST Ultrastar SSD800MM Enterprise SSD that we have recently reviewed here in our labs. Supermicro includes these SAS3 HBAs in their newest SuperStorage Server models, such as the SuperStorage Server 2027R-AR24NV that is part of our enterprise test lab. While SAS3 SSDs had been restrained in performance by existing IT infrastructure that featured 6Gb/s SAS, Supermicro’s 12Gb/s SAS3008 HBAs remove the bottleneck holding back those and upcoming SSDs that feature 12Gb/s SAS connectivity.

For those that have owned an LSI HBA before, then there will definitely be a familiarity with the Supermicro LSI SAS3008 HBA when examining the card. The card offers a similar HHHL PCIe form-factor as the LSI 9300-8i which it closely resembles, as well as a similar port layout on the rear of the card. The notable changes though are a different circuit board color and slightly different port connector position. 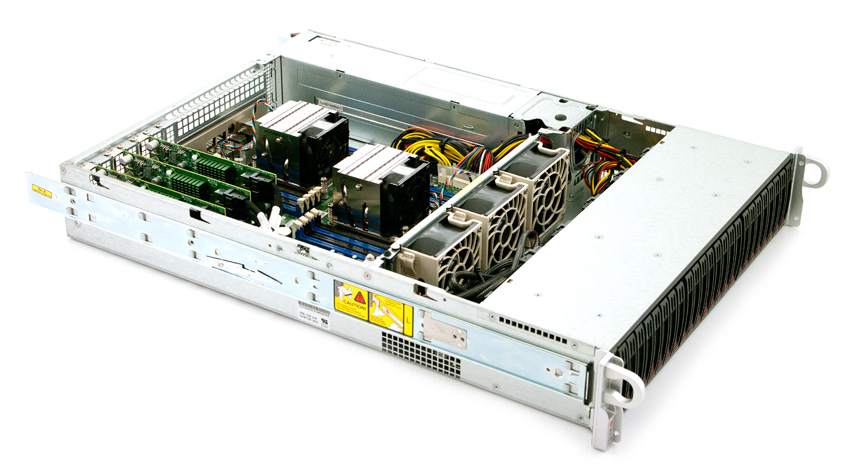 Front and center lays a hefty heat sink, which covers the Fusion-MPT-based LSI SAS 3008 I/O controller. Additionally, there is a PCIe x8 board edge connector for its PCIe 3.0 interface. 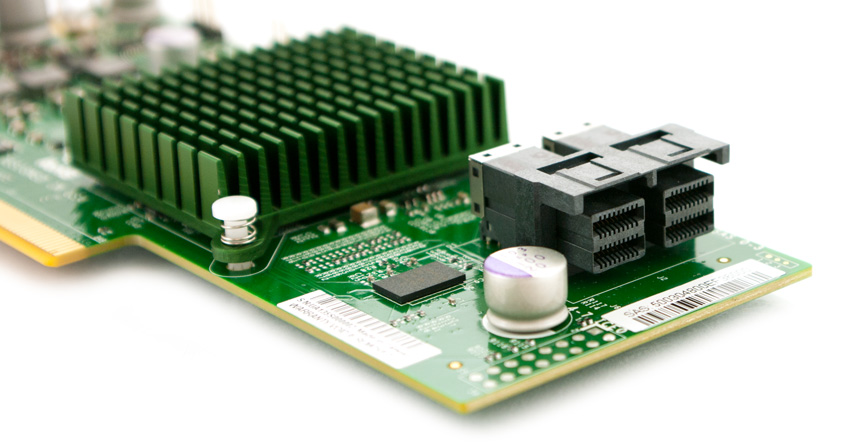 Both models of the SAS3008 are equipped with eight 12Gb/s lanes and interfaces with an eight-lane PCI Express 3.0 link. For increased functionality, they are compatible with both 3Gb/s and 6Gb/s SATA devices, as well as with 3, 6, and 12 Gb/s SAS devices. The most important addition to the HBAs is the two four-lane mini-SAS HD connectors, matching those found on the newest Supermicro backplanes.

To measure the performance of Supermicro’s new LSI SAS3008 HBA offering, we turned to our new SuperStorage Server 2027R-AR24NV which includes three of them directly connecting to 24 SAS3 drive bays. For test comparables, we took a sample of all of our new SAS3-capable SSDs, showing peak sequential I/O, peak sequential bandwidth, as well as peak random I/O.

Doubling the transfer size to 8k and switching to a sequential transfer, the Ultrastar SSD800MM continued to post excellent numbers with 107,331 IOPS read and 64,953 IOPS write. Those numbers translated to overall bandwidth worked out to be 858MB/s read and 519MB/s write of small-block sequential transfers.

The final synthetic benchmark utilized a much larger 128k transfer size with 100% read and 100% write operations. Under this workload, the HGST Ultrastar SSD800MM continued to shine through the Supermicro LSI SAS3008 HBA with over a 1GB/s read speed and 571MB/s write. Moving down the list, it was surprising to see few other SAS3 drives were able to leverage the faster interface with the SSD in steady-state with multi-threaded sequential transfers. The Toshiba PX02SS came in second with read speeds just under 600MB/s, while the PX02SM measured just 533MB/s and the Seagate 1200 SSD measured just 340MB/s.

The Supermicro’s new 12Gb/s HBAs based around LSI’s SAS3008 controller enable even greater performance for virtualized environments, cloud data centers, video streaming and other bandwidth intensive scenarios by supporting over a million IOPS and over 6000MB/s per card. The two 8-lane (of PCIe 3.0) models available are the LSI SAS3008 HBA  (IT) and LSI SAS3008 HBA (IR), which both include mini-SAS HD connectors to meet the SAS 3.0 standard. These HBAs leave behind the bottleneck of 6Gb/s SAS to enable enterprises with the most robust performance requirements to achieve their IT goals when paired with the right SSDs.

With performance and versatility like this, Supermicro helping do their part to push the adoption of 12Gb/s SAS products on the market. While mainstream server OEMs need more cycle time to adopt new technology, Supermicro is on the forefront by removing the restraints that keep the new breed of SAS SSDs from reaching their full potential. At the same time, the newfound headroom also clearly illustrates that just because a drive claims 12Gb/s SAS compatibility, that does not mean the drive can fully utilize the headroom available to it. The data included here is a mear overview however, detailed performance benchmarks for each of the SAS3 SSDs will be available shortly as the Supermicro LSI SAS3008 takes over core responsibility for testing the latest generation of high-throughput enterprise SSDs.

The Supermicro SAS3008 lets system builders and those who otherwise want to roll their own high performance servers get the maximum available performance out of the new breed of SAS3-based SSDs.