The SurgeX SX-20NE-RT-AR is a versatile branch-circuit surge eliminator highlighted by its ability to be managed and controlled remotely through a simple yet intuitive web interface. Featuring an AC surge eliminator and power conditioner, the SX-20NE-RT-AR supports up to 20A at 120V and provides admins with the option to remotely cycle power, rebooting any attached device, such as monitors, routers, and servers.

The SurgeX SX-20NE-RT-AR is a versatile branch-circuit surge eliminator highlighted by its ability to be managed and controlled remotely through a simple yet intuitive web interface. Featuring an AC surge eliminator and power conditioner, the SX-20NE-RT-AR supports up to 20A at 120V and provides admins with the option to remotely cycle power, rebooting any attached device, such as monitors, routers, and servers. 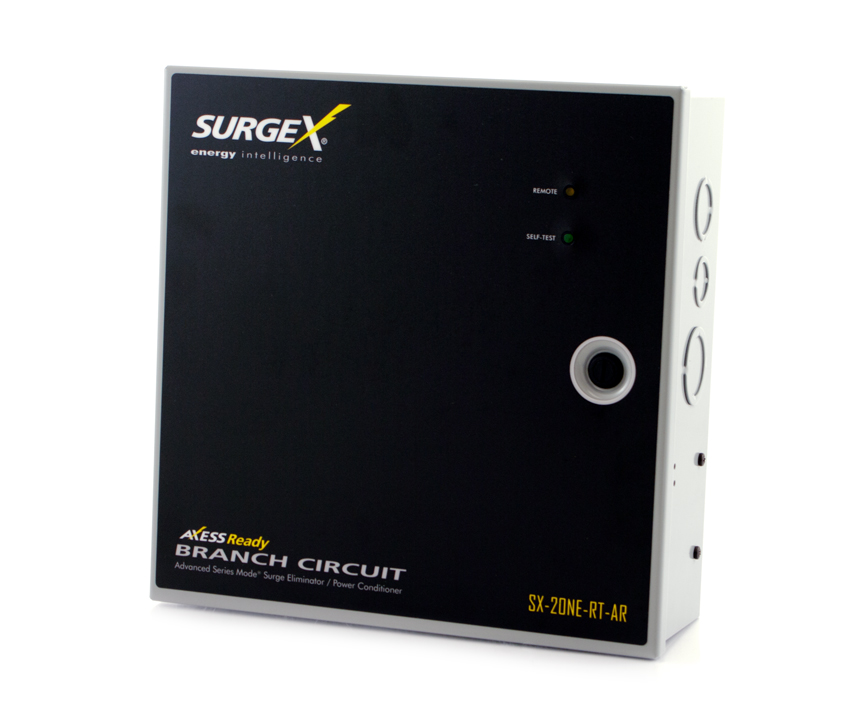 Along with the other products in SurgeX’s 20A line, one of the main advantages (and main purposes) of the SX-20NE-RT-AR is to support a larger range of products compared to the "plug-in" styles we have previously reviewed, such as SurgeX Axess Elite. Some electrical items are hardwired or include an excessive amount of devices, making it difficult to plug them into a normal surge protector bar. For example, one or more cubicles may be fed by one 20A circuit and is too large or unwieldy for one normal surge protector to have devices plugged into. A master surge protector like the SX-20NE-RT-AR, however, is hardwired into the line and gives protection without having to change the way devices are plugged in. It’s very efficient and offers transparent protection without users needing to worry how devices are connected.

Because it supports telnet access, the Command Line Interface (CLI) structure and syntax can be used to both configure and control the surge eliminator. In addition, SurgeX indicates that its DxP protocol enables software developers to integrate the unit into custom applications. The SX-20NE-RT-AR also gives users a peace-of-mind when it comes to protection, as it leverages two levels of password security; only the administrative account has access to setup and configuration.

The SX-20NE-RT-AR also offers a helpful feature called AutoPing that can be valuable for specific use cases. For instance, admins might use it to protect their organization’s network-related equipment (similar to the ones mentioned above) by continuously pinging one or more IP addresses. If at any time a vital device does not reply back to the ping, the SX-20NE-RT-AR recognizes that something has likely crashed, so it turns off power to the circuit brand and powers it back on again. This handy feature helps to fix network issues without any human involvement whatsoever.

The SX-20NE-RT-AR features a magnetic shielding NEMA steel enclosure making it an extremely rugged device built to the same rigor as breaker panels. SurgeX indicates that the branch circuit surge eliminator is specifically designed to reside by service entrances, electrical sub-panels, or in ceiling plenums. As such, both input and output AC connections are made via the enclosure knock-outs and are hard-wired to internal terminal blocks.

The front panel of the branch circuit is all black with the SurgeX branding and slogan at the top left while the model name, as well as text indicating “Axess Ready,” are both located at the bottom. Also located on the front is are the Remote and Self-Test LEDs, the latter of which indicates if the internal surge protection circuitry is fully functional; while the former tells users when hard-wired remote control signal is active and the output is On. 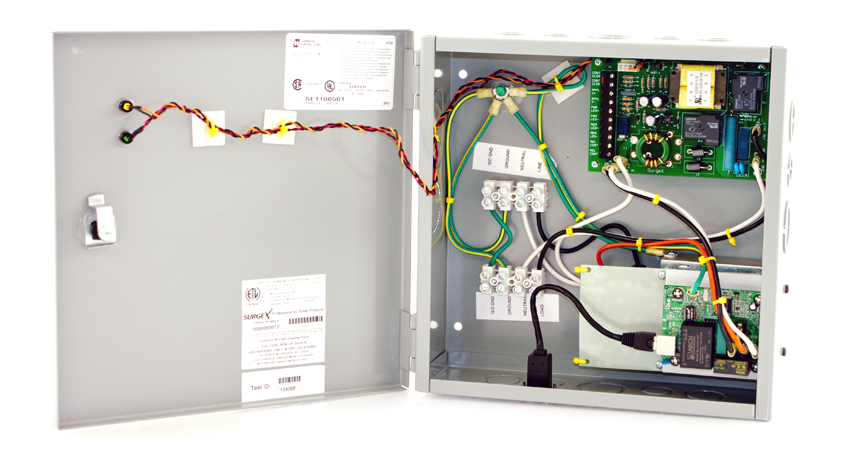 The RJ45 connector for 10/100 Ethernet is located on the bottom of the SX-20NE-RT-AR. The sides are home to the Reset button and Axess On LED.

The SX-20NE-RT-AR leverages the Axess Ready web interface, which is the easiest way to operate the device and to modify its configuration parameters. Once you have your AR setup, accessing the web interface is simple and easy. Just open a web browser, type the IP address of the SX-20NE-RT-AR, and log in.

When you’re authorized as a user, the Control and Status page will appear. Here, you can click Power On or Power Off the AC output. If a power interruption occurs, the AC output will return to the last known state prior to the outage. The Cycle Power option temporarily changes the state of the AC output a user-defined cycle time. 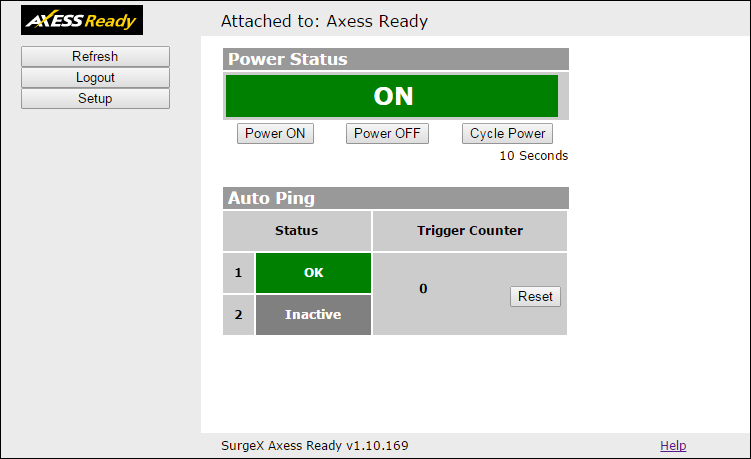 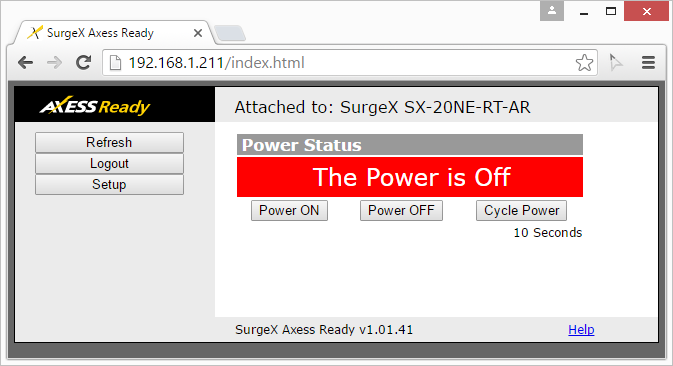 On the Schedule page, users can schedule the SX-20NE-RT-AR to upwards of 8 different recurring power events. Additionally, the starting date and time, the action to be taken, and the repetition interval (optional) can be defined by the user. The Clear option deletes the schedule. 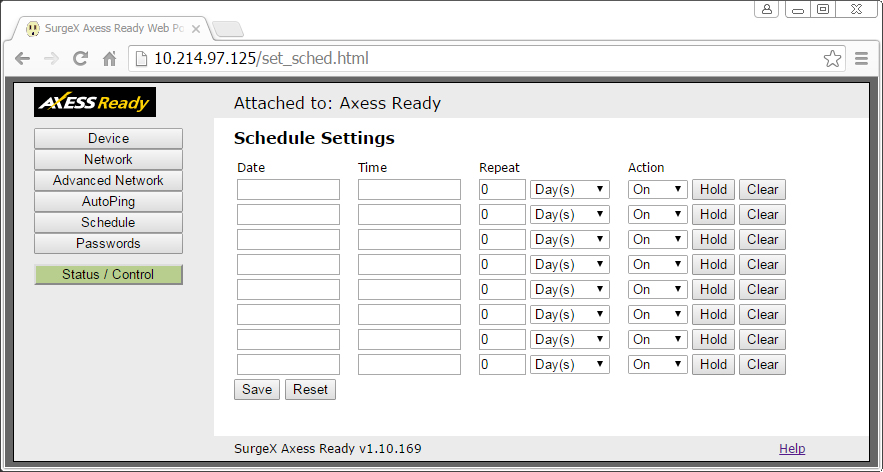 In Network Settings, you can change the IP Mode to Static, which gives users the ability to manually set the IP address, Subnet Mark, Gateway and DNS; or to DHCP, which enables the device to automatically acquire its network settings from a DHCP server. 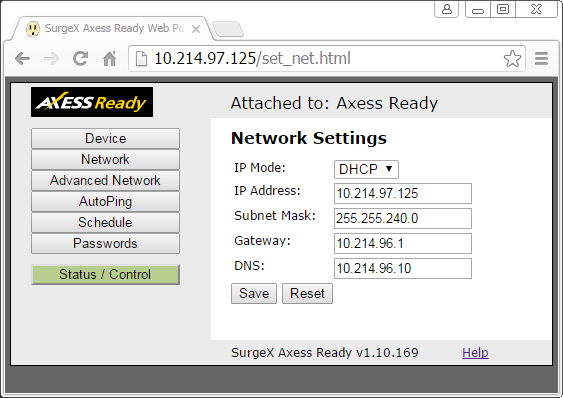 When enabled, the AutoPing feature automatically detects failed attached devices and performs a timed reboot or another power control function. To set up this feature, we simply specified the IP addresses to be periodically pinged. So when the SX-20NE-RT-AR suddenly fails to receive a response from that specific IP address, the programmed power control function is triggered. In addition, you can apply AND or OR logic functions to two addresses, which allows users to set it up so that both (AND) or either (OR) must fail to activate the selected action.

SurgeX continues its trend of offering some of the industry’s best power-protection solutions with the SX-20NE-RT-AR, boasting excellent surge elimination and power conditioning at the branch circuit-level. In addition, the surge eliminator is both managed and controlled by an extremely simple, yet intuitive, web interface.  For example, users can remotely restart any attached device with ease (this includes monitors, routers, and servers), and have the ability to activate an AutoPing option that helps to protect these attached devices by continuously pinging their IP addresses.