The Synology DS216+ is equipped with high-quality components and two drive bays giving it a unique appeal to performance-minded users that don't necessarily need a huge storage pool. That being said, users can still enjoy up to 16TB of storage (using two 8TB HDDs), which is certainly enough capacity for the home user and at least through the beginning stages of smaller businesses. Synology has also designed the DS216+ to make the installation of hard drives quick and easy, as it uses a screw-less bays with hot-swappable support to eliminate the need for any tools.

The Synology DS216+ is equipped with high-quality components and two drive bays giving it a unique appeal to performance-minded users that don't necessarily need a huge storage pool. That being said, users can still enjoy up to 16TB of storage (using two 8TB HDDs), which is certainly enough capacity for the home user and at least through the beginning stages of smaller businesses. Synology has also designed the DS216+ to make the installation of hard drives quick and easy, as it uses a screw-less bays with hot-swappable support to eliminate the need for any tools. 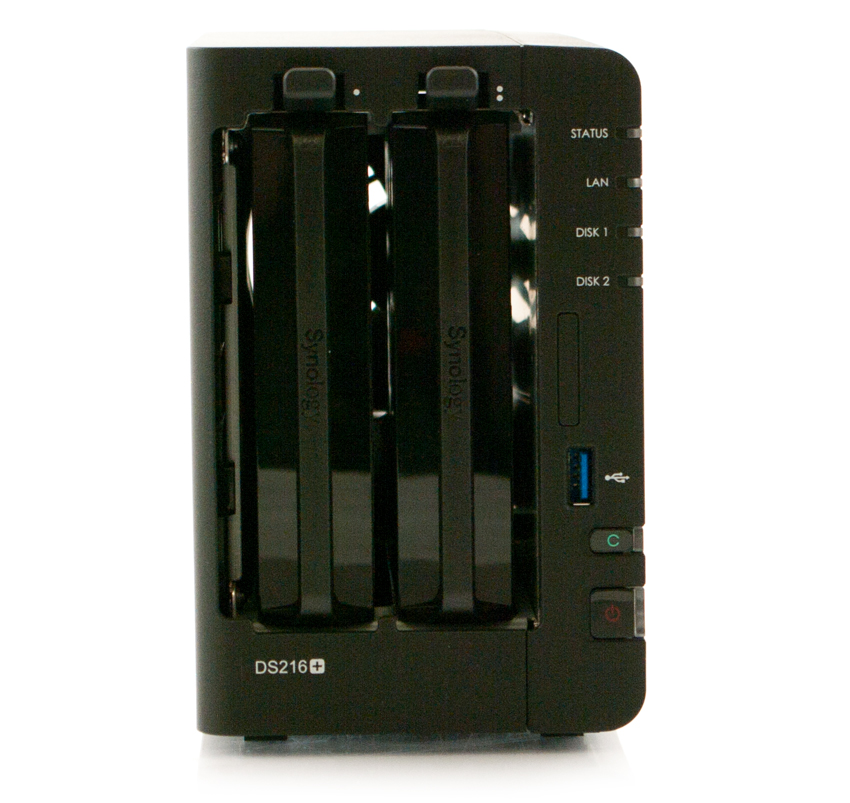 As far as performance goes, the DS216+ leverages its dual-core processor to deliver quoted transfer speeds of 111MB/s in both read and write activity. Synology has also loaded their 2-bay NAS with several extra features for SOHO users who want their NAS to double as an entertainment center, most notably 4K video transcoding.

Like all DiskStations, one of the more compelling features of the DS216+ is its inclusion of Synology's DSM (DiskStation Manager) OS, which allows users with little knowledge of NAS platforms to deploy and manage their NAS without any IT support. DSM operates through the web browser and includes access to Synology's Package Center, which offers a vast selection of add-on packages and applications for business, entertainment, and file management use cases. The DS216+ can seamlessly consolidate file libraries into an organized and accessible location through File Station, which can also be accessed through Synology's DS file mobile app. Additionally, users can leverage their DS216+ as a backup location for both Windows and Mac devices, as it automatically keeps track of and backs up any changes that are made. In terms of virtualization applications, Cloud Station can be configured to sync files across all connected devices.

Synology has also equipped the DS216+ with several useful security features, including: Security Advisor (analyzes system for malware), AppArmor (acts as a firewall), and hardware-based encryption. In addition to all of Synology's preexisting energy efficiency measures, the DS216+ gives users the option to control LED brightness on their NAS by either configuring an adjustment schedule or manually altering it.

The DS216+ is very similar to Synology's DS216 in terms of appearance with its sleek black chassis design and minimalistic branding (Most of the branding for the device is along its sides, which cleverly doubles as venting.) 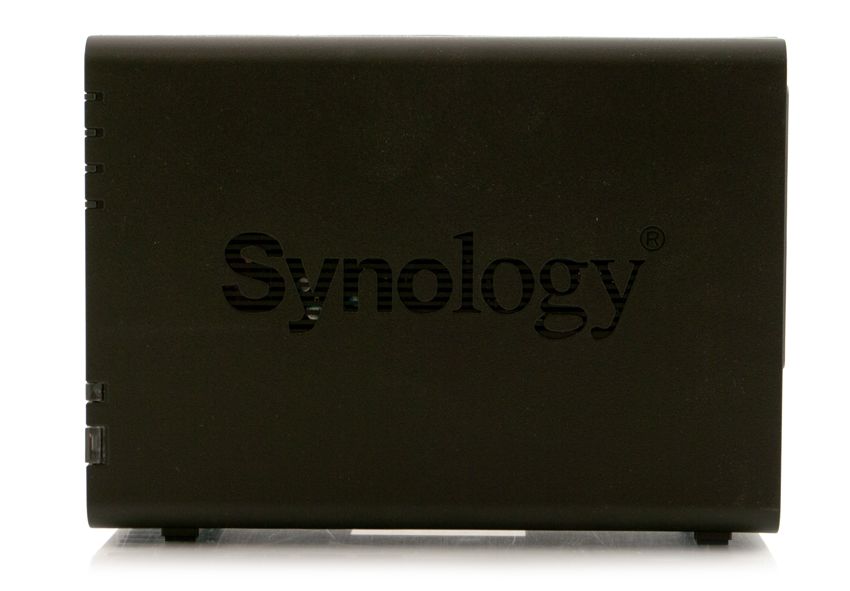 Also on the front panel of the 2-bay NAS are six LEDs located along top-right of the device: system status, LAN connectivity, and drive bay status. The USB copy function, a USB 3.0 port), and the system power button reside just beneath. 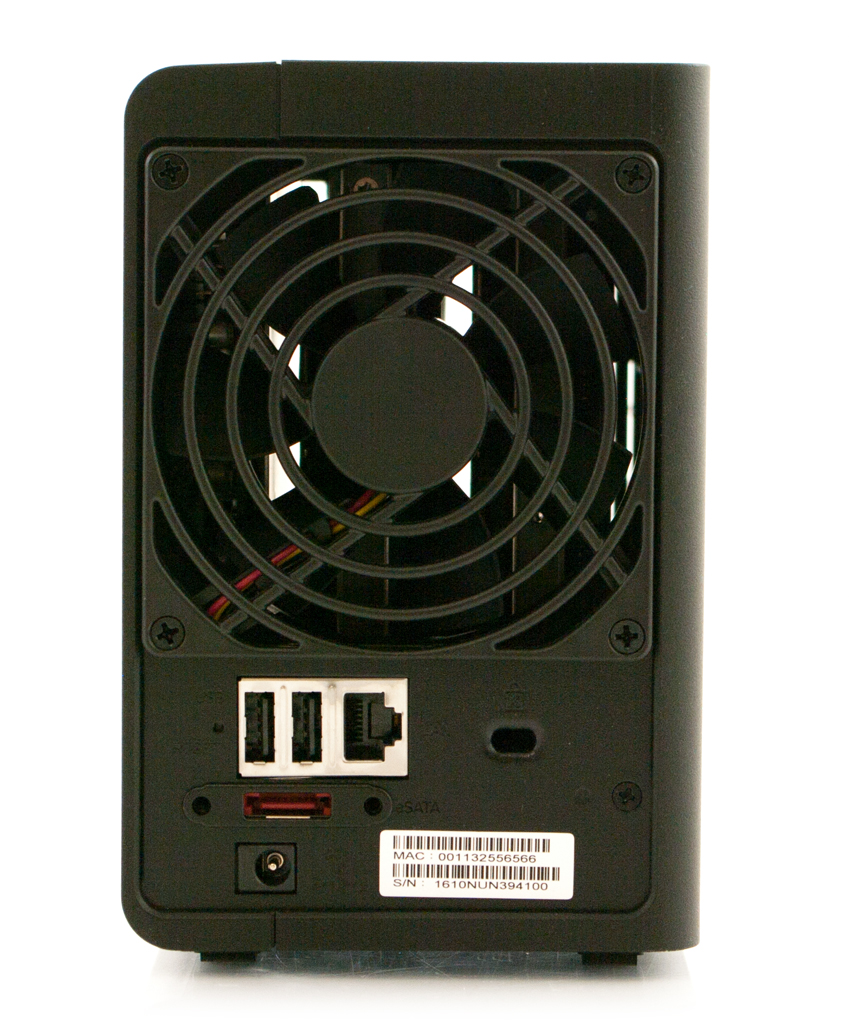 The back of the DS216+ is comprised of its 92mm x 92mm fan, two USB 2.0 ports, one LAN port, one eSATA port, one Kensington lock port, a reset button, and the AC adapter. The DS216+ is slightly elevated from the ground by four rubber pegs, which assists with heat dispersion and help to secure it firmly in close on the floor or on a desk.

In the first of our enterprise workloads, we measured a long sample of random 4k performance with 100% write and 100% read activity. The DS216+ excelled in terms of reads regardless of configuration (411 IOPS and 274 IOPS in CIFS and iSCSI, respectively). With write performance the DS216+ had comparable results for a small NAS with 278 IOPS in iSCSI and 111 IOPS in CIFS.

The DS216+ posted the lowest average read latency out of all systems tested when configured in CIFS (622ms). However, CIFS also yielded the second-highest write latency overall (2,286ms). In iSCSI, the DS216+ posted an average performance of 931ms read and 917ms write.

We saw an improvement in performance for the DS216+ (CIFS) in our max latency benchmark, with the overall lowest read latency (2,403ms) and a competitive write latency (4,181ms). The results were similar when the DS216+ was configured in iSCSI, with 2,807ms and 4,191.1ms in read and write, respectively.

In terms of standard deviation, the DS216+ performed very well when configured in CIFS (98ms read and 190ms write), posting the best numbers overall. The DS216+ also performed well when configured in iSCSI, with 476ms read and 633ms write. Although its iSCSI performance wasn't as compelling as its CIFS performance, the DS216+ still established itself as one of the best units tested in this benchmark overall.

The next four charts are based on a protocol consisting of 70% read operations and 30% write operations with an 8k transfer size. The workload is then varied from 2 threads and a queue depth of 2 up to 16 threads and 16 queue. Although the DS216+ fell behind the DS216j and DS216play when configured in iSCSI, it was the top performer in terms of CIFS. 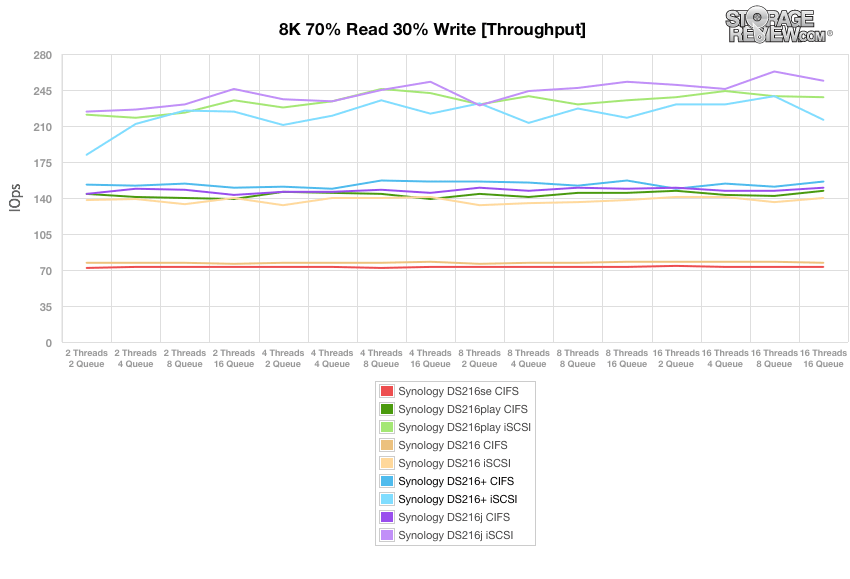 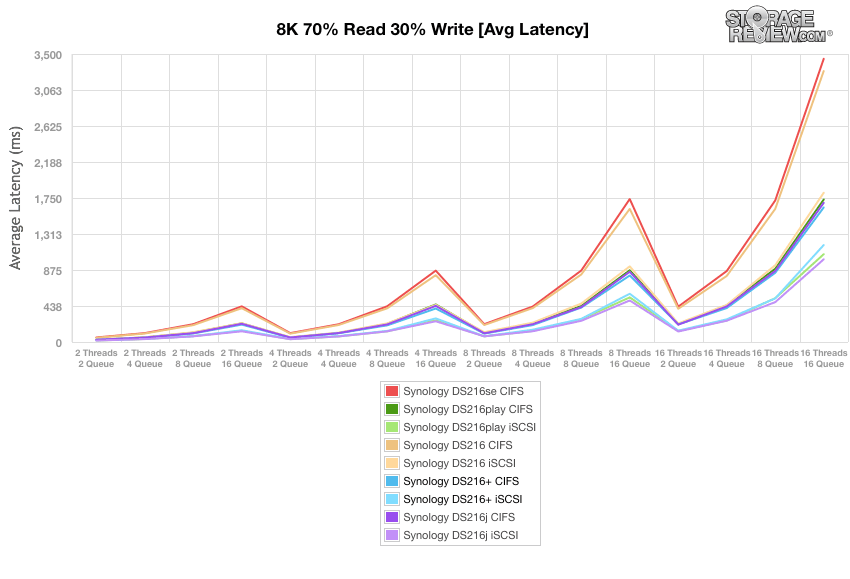 Although all devices exhibited a fairly erratic performance through most of our max latency benchmark, the final standings were similar to the standings of our throughput and average latency benchmarks. However, one notable difference was that the DS216+ (CIFS) exhibited a stronger performance than in previous tests, finishing out the benchmark with the second-lowest latency overall. 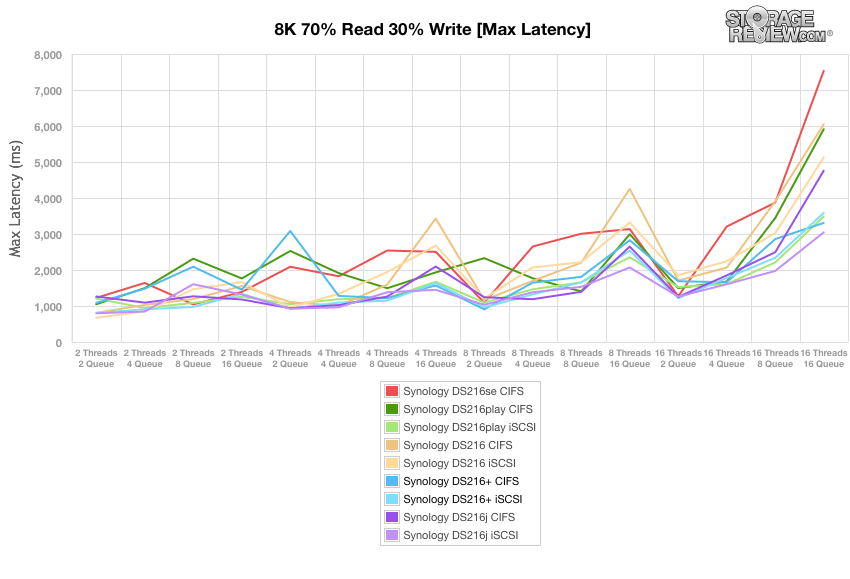 The DS216+ (CIFS) finished out our standard deviation benchmark as the top performer overall, with the DS216j (CIFS) and the DS216play (CIFS) closely following. The DS216+ (iSCSI) trailed most similarly configured units, finishing the test with the second-highest latency (behind the DS216). 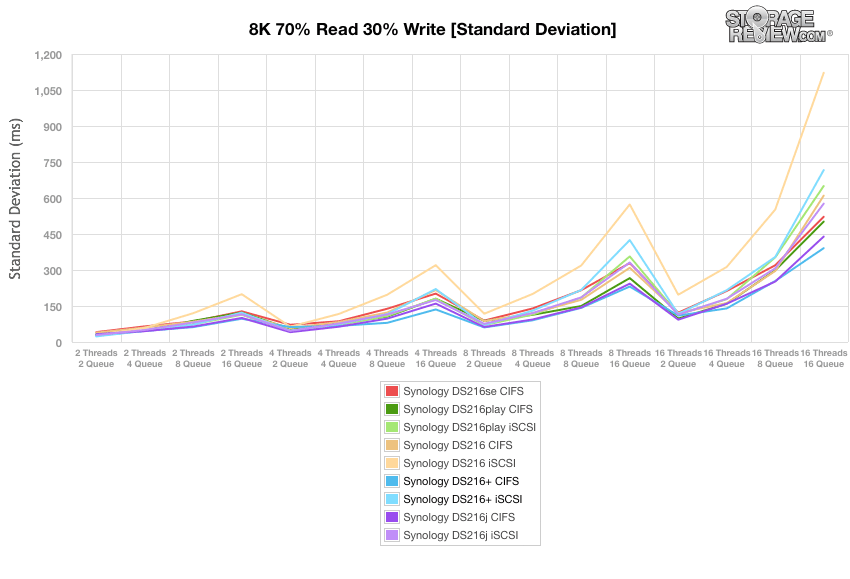 Unsurprisingly, Synology's newest 2-bay NAS is another fantastic addition to their line-up of SOHO DiskStations. The DS216+ will certainly serve its target demographic very well, especially those who are looking for a low-key storage solution. Although there are other larger capacity DiskStation models that could offer much more, the DS216+ is a top-of-the-line, low-cost 2-bay NAS that takes up very little physical space. In addition, by leveraging a dual-core CPU and 1GB of DDR3 RAM, the DS216+ provides users with strong performance despite this affordable price tag. Coupling all of this with its 4K video transcoding abilities and its access to a wide range of DSM add-ons, the DS216+ is a good offering for a 2-bay business NAS and home media center options.

Diving into its performance shows that the DS216+ can hold up quite well during our performance benchmarks. In most of our tests, the DS216+ was either the top performer or among the leaders, regardless of its configuration (CIFS vs. iSCSI). For example, during our long sample of random 4K performance, which uses 100% write and 100% read activity, the DS216+ excelled in reads with 411 IOPS and 274 IOPS in CIFS and iSCSI, respectively. Results told a similar story when we doubled the transfer size to 8K, as the DS216+ posted the highest read performance when configured in iSCSI (14,250 IOPS) and the second-highest write performance (10,610 IOPS). During the much larger 128k transfer size, the DS216+ was once again at the top of the leaderboard in both reads and writes when configured in iSCSI, posting 114,470 KB/s and 115,710 KB/s, respectively. The DS216+ also recorded impressive numbers when configured in CIFS, with 112,540 KB/s read and 115,680 KB/s write, which was second-highest out of all CIFS-configured NAS devices.

That being said, we did see a few lapses in performance. This was slightly unexpected, as the DS216+ was being compared to objectively “lesser” systems. However, we saw only marginal differences for most of these instances where the DS216+ was outperformed. Our mixed workload benchmarks also showed some weaknesses with the DS216+ when configured in iSCSI, but it excelled when configured in file-level storage (CIFS).

Ultimately, if you’re a power user looking for a high-class, 2-bay NAS that excels in office or home media-hub applications, you cannot go wrong with the DS216+.

The DS216+ comes loaded with nice components for a Synology 2-bay DiskStation, providing users with strong performance and advanced features while maintaining a low initial cost.