Synology’s new DiskStation DS1515+ is a 5-bay NAS that houses up to 30TB of raw storage, a quad-core 2.4GHz CPU, and up to 6GB RAM (with upgrade). It was designed for demanding use-cases and serves reported transfer speeds of 450MB/s and 396.5MB/s (read and write, respectively). Like many of Synology’s offerings, it also prioritizes security, providing AES-NI encryption with very little decrease in read speeds, in addition to a suite of other features. Each DS1515+ server is scalable up to 90TB (with two Synology DX513 expansion units), and multiple DiskStation servers can be consolidated through Synology’s Central Management System (CMS) for enhanced administrative efficiency. Account integration is easily done thanks to support for Windows AD, LDAP, and Domain Trust.

Synology’s new DiskStation DS1515+ is a 5-bay NAS that houses up to 30TB of raw storage, a quad-core 2.4GHz CPU, and up to 6GB RAM (with upgrade). It was designed for demanding use-cases and serves reported transfer speeds of 450MB/s and 396.5MB/s (read and write, respectively). Like many of Synology’s offerings, it also prioritizes security, providing AES-NI encryption with very little decrease in read speeds, in addition to a suite of other features. Each DS1515+ server is scalable up to 90TB (with two Synology DX513 expansion units), and multiple DiskStation servers can be consolidated through Synology’s Central Management System (CMS) for enhanced administrative efficiency. Account integration is easily done thanks to support for Windows AD, LDAP, and Domain Trust. 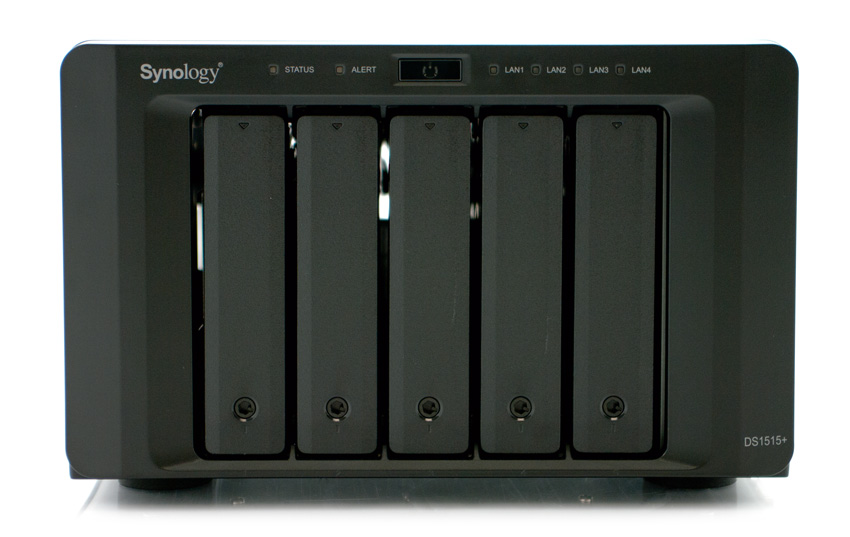 Like all DiskStations, the DS1515+ makes use of Synology’s renowned DiskStation Manager (DSM), a sleek browser-based interface with easy administration and access to Synology’s Pack Center (add-on packages with business and entertainment applications). User Home lets administrators add “home” folders for all users, and virtualization is supported through VMware (vSphere 5 and VAII integration), Citrix, and Microsoft Hyper-V. The DS1515+ can function as a multi-functioning server with web hosting (Web Server), surveillance (Surveillance Station), email domain creation (Mail Station), printing (Printer Server), and VPN serving. Making use of all of these features reduces the amount of hardware needed for standard business processes.

The DS1515+ carries a price tag of around $800 and has Synology’s standard 3-year warranty.

The DS1515+ is more or less identical to the DS1815+ (except that it has three-fewer bays). It has a plastic matte-black chassis with the five drive bays open to the face, each of which is accompanied by a corresponding LED. Above the bays is the power button (in the center), status LED, alert LED, four LAN LEDs, and some branding. The sides feature branding as well. 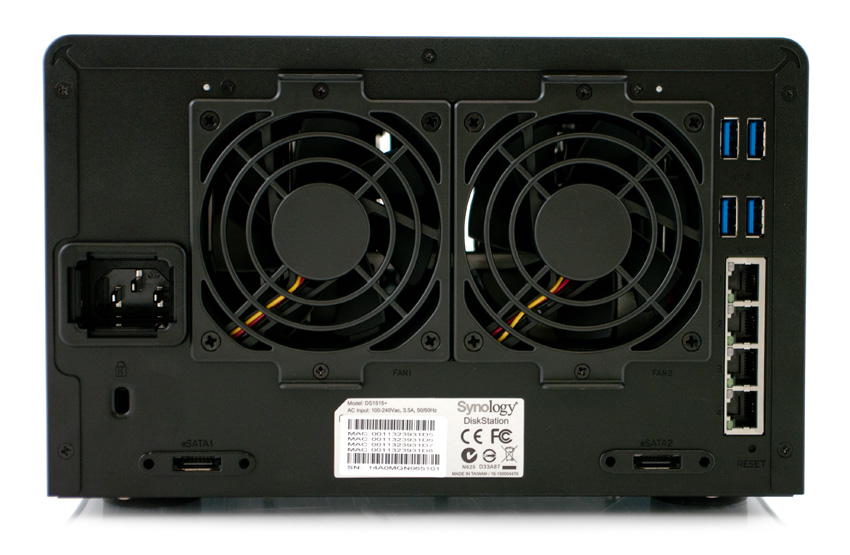 The DS1515+ is compatible with the newest version of DiskStation Manager (DSM), 5.1. DSM is a feature-rich web-based operating system that provides users with numerous ways to manage data including documents, multimedia, and important backup files. Synology has packed DSM with a suite of added-value packages and applications to help with business productivity, flexible administrative options, and tools to secure the DS1515+ DiskStation and user’s valuable data.

Users can download and install add-ons via the Package Center. These add-ons include ways shares files on the cloud, setting up a VPN environment, and an antivirus application to protect your system. 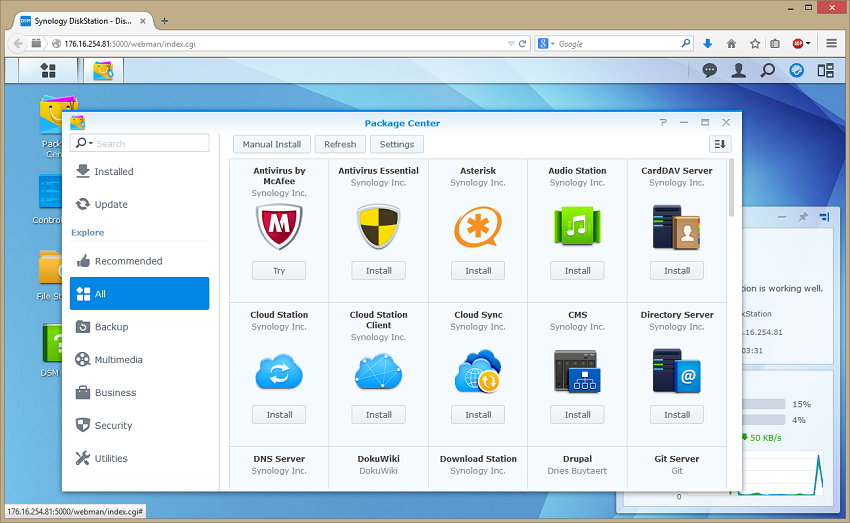 DSM also offers volume management with Storage Manager, which is a management application that helps to organize and monitor the storage capacity on the DiskStation, with tasks such as: Creating different types of RAID and non-RAID storage configurations (including volumes, disk/RAID groups, iSCSI LUNs, and iSCSI Targets), monitoring the overall storage usage of your DiskStation, inspecting the health of installed drives, and using advanced options, such as hot spare drives, SSD TRIM, and SSD cache. 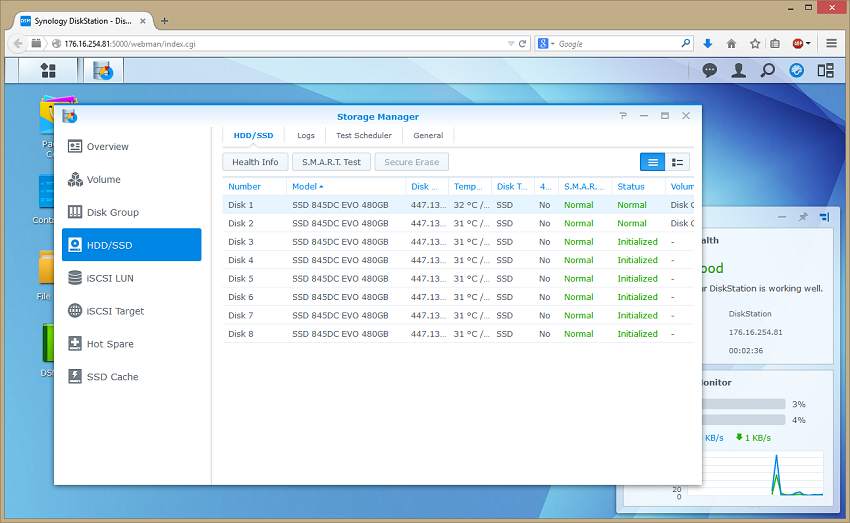 Our first benchmark of the Synology DiskStation DS1515+ is our Microsoft SQL Server OLTP Benchmark that simulates application workloads similar to those the Synology DS1515+ are designed to serve in a production setting. For this particular benchmark, we show the results captured on the DS1815+, which has the same hardware configuration as the DS1515+, minus three drive bays. Since the iSCSI LUN used in this test leverages two SSDS in RAID1, this configuration would show identical results across both platforms.

In our next test we look at a much smaller 5k VU load where we compare the DS1815+ and DS1813+ against one another with a twin-SSD RAID1 configuration. They posted virtually identical results with 1,051.1 TPS and 1,050.8 TPS respectively.

In the first of our enterprise workloads, we measured a long sample of random 4k performance with 100% write and 100% read activity using the SMB protocol. The DS1513+ was in line with the DS1515+ (Reds) in terms of write functions (532 IOPS and 546 IOPS, respectively), but it fell short in read functions, which were best in the DS1515+ loaded with Reds (365 IOPS). When configured in iSCSI, the DS1515+ loaded with Reds claimed the top spot in both read and write functions, with 1412 IOPS and 299 IOPS, respectively (although the standings were fairly even overall).

Moving to our latency segment with a load of 16T/16Q, our SMB file-level test results were similar to those seen in the SMB throughput benchmark; the DS1515+ (Reds) and DS1513+ were neck and neck in terms of write functions (468.1ms vs. 480.4ms, respectively), and the DS1515+ with reds had the best read performance with 799.3ms. The iSCSI block-level test for the same benchmark also resembled the results from the throughput benchmark. All of the configurations had similar numbers, but the DS1515+ loaded with Reds performed slightly better than the others in both read and write (181.2ms and 861.2ms, respectively).

Calculating the DS1515+’s standard deviation for the 4k latency shows us how consistent the latency results were within each of the categories during our benchmarks. The DS1513+ loaded with Seagate NAS HDDs was the top performer in both SMB and iSCSI as well as both read and write functions (87.6ms and 312.4ms, respectively). Comparatively, the DS1515+ performed poorly in general; the worst write performance came from the DS1515+ loaded with Seagate drives and configured in iSCSI (2,076.9ms), and the worst read performance came from the Seagate-loaded SMB system (1,150.2ms).

Our next benchmark measures 100% 8k sequential throughput with a 16T/16Q load in 100% read and 100% write operations. The SMB test showed strong numbers for the DS1515+ loaded with Red drives, claiming the top spot in both read and write (51,982 IOPS and 43,948 IOPS, respectively). Seagate drives in the same configuration showed almost identical results. Overall, iSCSI transfer speeds were much slower; the top iSCSI performers were the DS1515+ with Reds (write speeds of 16,433 IOPS) and the DS1513+ loaded with Seagate NAS drives (read speeds of 13,389 IOPS).

Compared to the fixed 16 thread, 16 queue max workload we performed in the 100% 4k write test, our mixed workload profiles scale the performance across a wide range of thread/queue combinations. In these tests, we span workload intensity from 2 threads and 2 queue up to 16 threads and 16 queue. Systems configured in iSCSI performed better overall, and the top spot went to the DS1515+ loaded with Reds. The DS1513+ loaded with Seagate drives using the SMB protocol was the slowest overall. 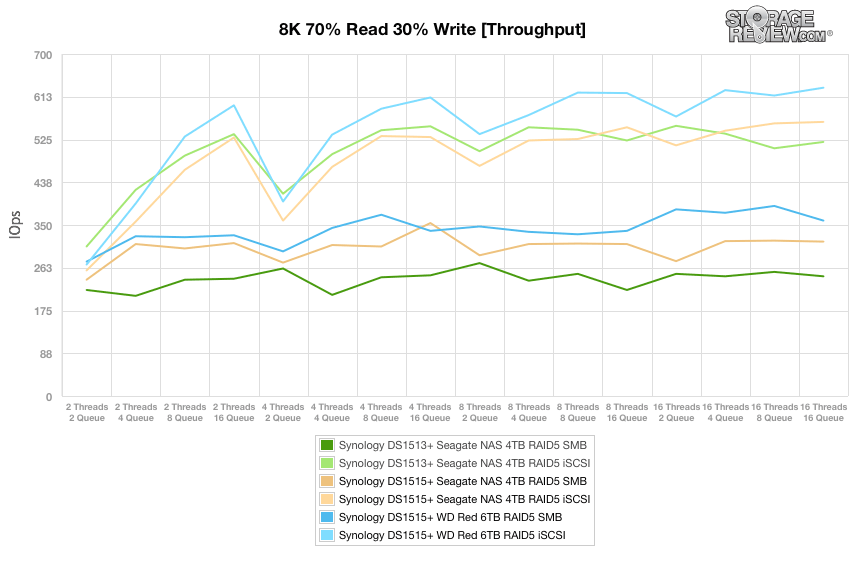 Standings were exactly the same when average latency was measured. 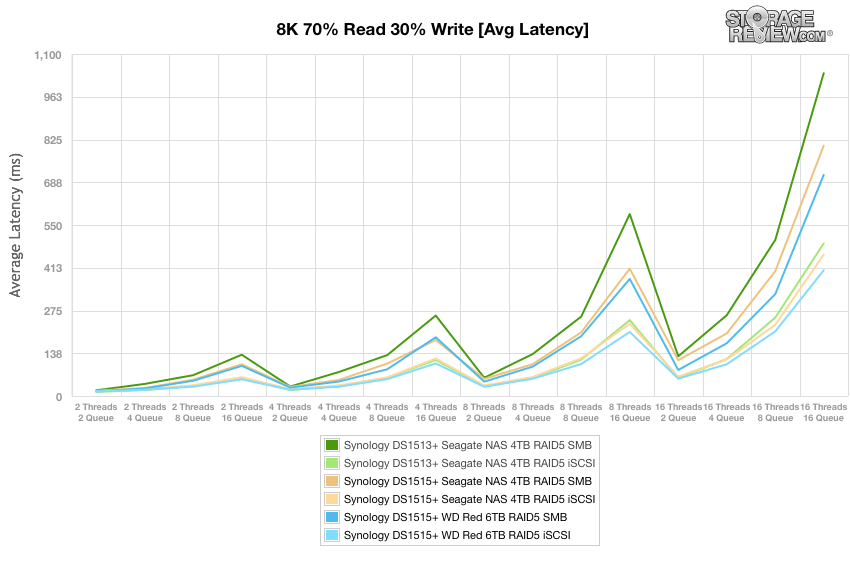 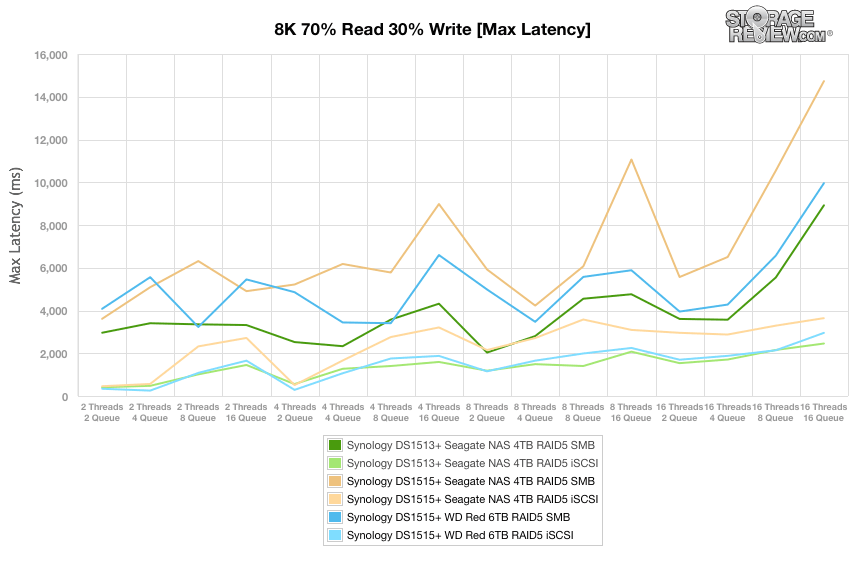 The standard deviation standings for latency during our 8k 70/30 benchmark were more or less identical to those of the max latency test, with no notable changes. 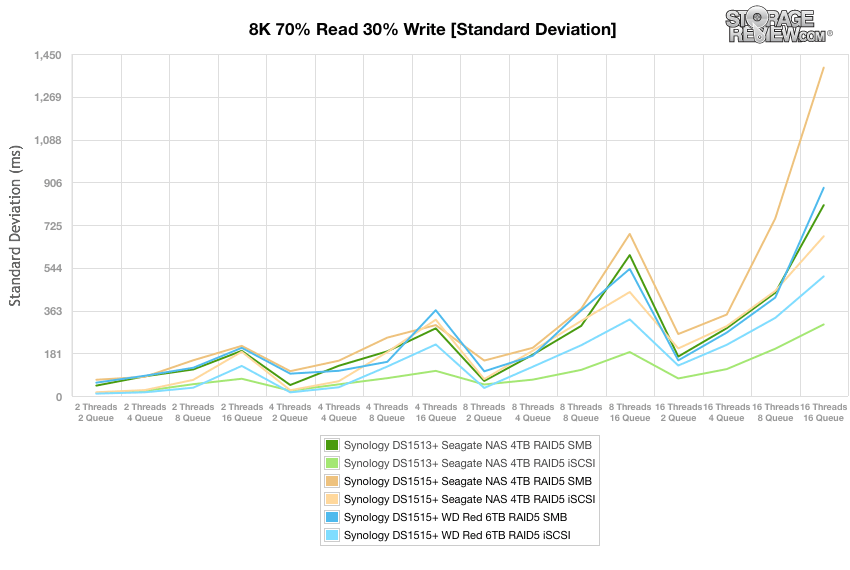 Our last test in our small NAS Synthetic Workload testing is the 128k test, which is a large block sequential test that shows the highest sequential transfer speed. When looking at the 128k performance of 100% write and 100% read activity, the DS1515+ configured in SMB dominated (regardless of drive type), posting read and write numbers over 462,000KB/s and 446,000KB/s (WD Red), respectively. The DS1515+ did not perform well when configured in iSCSI, more or less holding up the rear of the group.

The DiskStation DS1515+ provides up to 30TB of raw storage through 5 drive bays, and is scalable up to 90TB. It consolidates Synology’s wide array of features and applications into a SOHO NAS that can handle demanding use-cases while maintaining security (with AES-NI encryption) and ease of use thanks to the acclaimed DSM OS, which is inherent in their entire DiskStation line. The DS1515+ uses a 2.4GHz quad-core processor, and an entire fleet of DiskStation servers can be clustered and managed centrally through the use of Synology’s CMS and SHA. Synology offers safety measures to cover both virtual failure (Windows ACL support, Windows Backup, Apple Time Machine, rsync, Backup & Replication, Hybrid RAID, Cloud Station, and Storage Manager) and hardware failure (quad LAN ports, hot-swappability, and passive cooling). Coupled with its quad LAN ports for improved link aggregation and uptime and its hot-swappable drives for continuous operation during drive replacement or repair), Synology’s DS1515+ is packed with useful features that give businesses a peace of mind that their data will be protected in the event of any type of hardware malfunction.  This new DiskStation definitely has a lot to offer in this regard.

As for the details of its performance, the DS1515+ should be configured in iSCSI if its desired use-case resembles our random 4k or mixed 8k benchmark; it was consistently the top performer when it came to throughput and latency (with the exception of the standard deviation test). In our 8k sequential or large block (128k) sequential workloads, however, the NAS performed much better when configured in SMB, headlined by its dominance in throughput (more than doubling the IOPS of the next configuration). When comparing the DS1515+ with its predecessor, the DS1513+, there were some instances in which it fell short, such as with the standard deviation benchmark in a 4k environment. That being said, the newer DiskStation outperformed its cousin in almost every way, and by a noticeable margin, so businesses can be rest assured that upgrading to the DS1515+ is well worth the purchase. For those looking to set up their first NAS, there’s a lot to love with Synology’s powerful new 5-bay NAS, particularly with its feature-rich and user-friendly DiskStation Manager and focus on demanding use-cases.

The DS1515+ is perfect for businesses looking to invest in a NAS server that allows for future expansion while providing top-tier transfer speeds as well as an established infrastructure of applications and features.