One option for those looking for network-attached storage (NAS) to store and stream up to 16 terabytes of video is the DiskStation DS216play from Synology. This 2-bay NAS can handle playing 4K video across a local network as well transcoding it so it can be streamed to a range of devices, including tablets and phones. Synology's new offering is built around an 1.5 GHz dual-core STM STiH412 Monaco chip. This is the source of the H.265 (HEVC) hardware-based transcoding, but only in Synology's own Video Station app. At this time, Plex isn't supported. A floating point unit helps speed up thumbnail generation.

One option for those looking for network-attached storage (NAS) to store and stream up to 16 terabytes of video is the DiskStation DS216play from Synology. This 2-bay NAS can handle playing 4K video across a local network as well transcoding it so it can be streamed to a range of devices, including tablets and phones. Synology's new offering is built around an 1.5 GHz dual-core STM STiH412 Monaco chip. This is the source of the H.265 (HEVC) hardware-based transcoding, but only in Synology's own Video Station app. At this time, Plex isn't supported. A floating point unit helps speed up thumbnail generation. 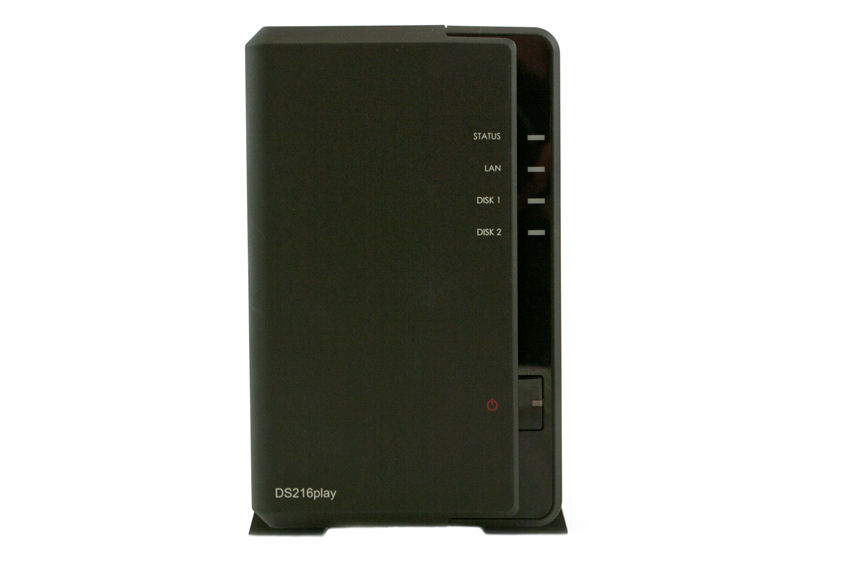 This is a version will replace last year's DS214play. The DS216play sports a new processor and support for 4K Ultra HD video and H.265 (HEVC) added. But this isn't a typical upgrade: Synology left out the SD card reader on this model, reduced the number of USB ports by one, and left the 1GB of RAM unchanged. This allowed the company drop the MSRP to $299.99, while the earlier version was $369.99. At 15.08W (Access) and 6.83W (HDD Hibernation) the DS216play also uses much less power than its predecessor.

This NAS is up to streaming MP4, MOV and M4V in the original video resolution on PC and Mac, and there are third-party plug-ins for unsupported formats. On the new iPhone 6s, the DS216play can handle MP4 in the original resolution as well as MKV as long as it has been remuxed. For older models, it can transcode MP4 to 1080p, transcode 4K video to 1080p, or remux MKV to 1080p. Synology's device offers support for many formats through MX Player for Android, and 4K video can be transcoded to 1080p with H264 or H265.On Windows Phone, this NAS can stream MP4 and WMV in the original resolution, and transcode video at up to 720p. For Roku, it's up to MP4 (mpeg4 Pt 14), M4V, and MOV (video codec: h264 / mpeg4; audio codec: aac / ac3 / mp3 / none and non-5.1 aac). MKV can be remuxed, and video can be transcoded up to 1080p, though that depends on the Roku model. Users of Chromecast can use MP4, MOV, M4V, and MKV in the original if the video codec is H.264 [email protected] and audio codec is AAC/MP3. Users will need to remux video if the audio codec is AC3, or it can stream the original video by enabling AC3 passthrough in DS video. 4K video can be transcoded to 1080p with H.264 or H265. If the DS216play can transmit the original files to DLNA devices like XBOX 360, Sony PlayStation 3, XBOX ONE.

The DS216play comes with a 2-year warranty and starts off around $300 for a diskless model.

Anyone who has seen one of Synology's NAS before will recognize the DS216play's relatively slim black design. On the front are four LED lights reporting the condition of the device’s status, LAN, and each of the HDDs. The power button is below this. 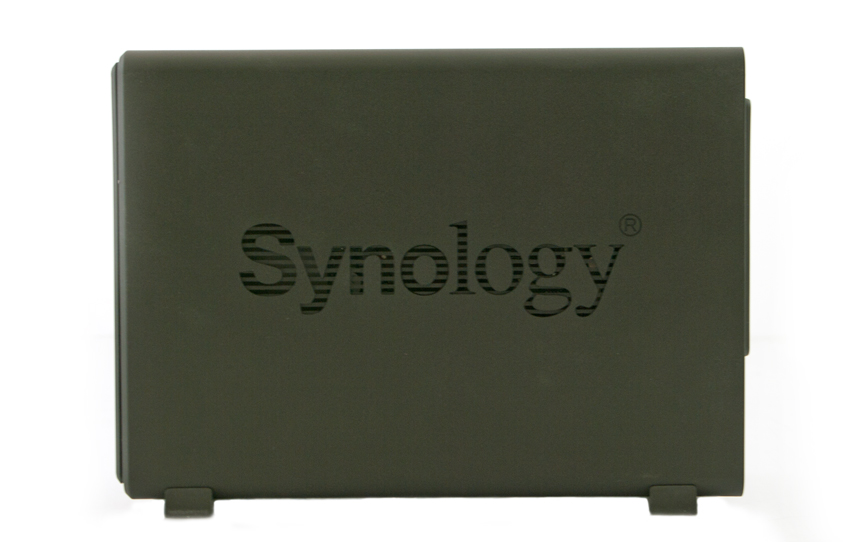 Each side features large Synology branding, while the rear of the device has the 92mm fan above the USB 3.0 and USB 2.0 ports, a LAN port, and the AC adaptor port. 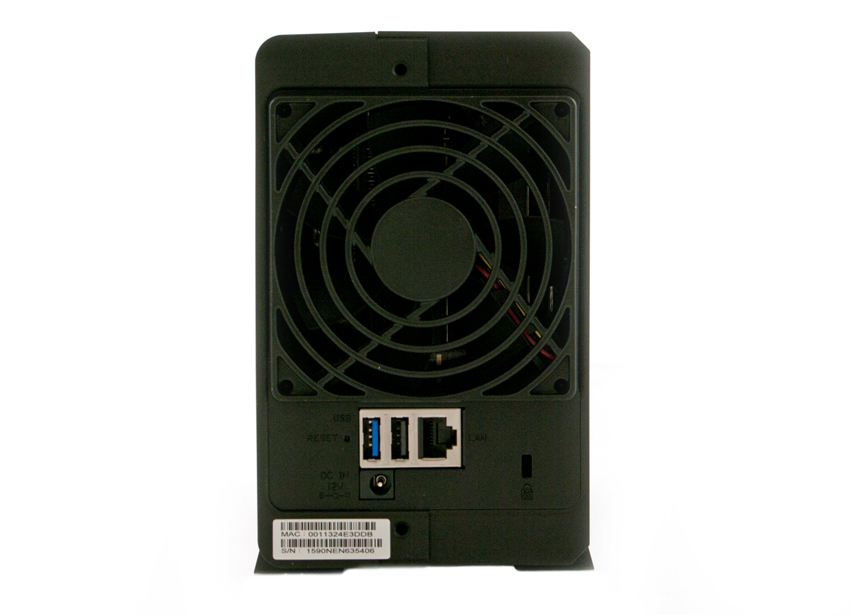 This new NAS does not include hot-swappable bays. Instead, it’s necessary to unscrew the housing, slide the housing off, and then screw the drives into place before replacing the housing. 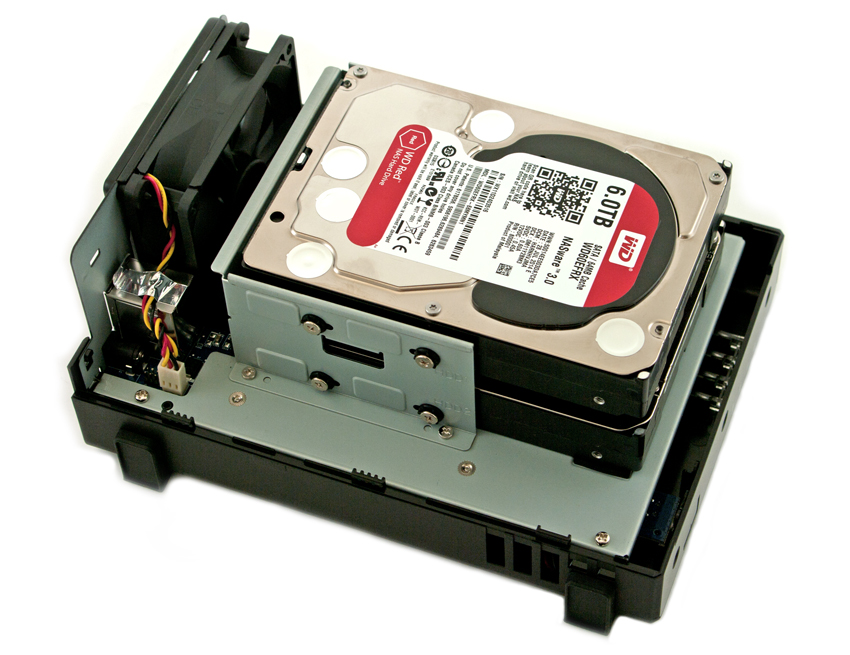 The Synology DiskStation DS216play uses this company's DSM OS, which we've covered many times in the past. As previously mentioned, the new feature is the ability to transcode 4K video, which allows the user to store a copy of each video file for use on a 4K TV and then convert it to a lower resolution on the fly for playing on a mobile device. We have previously covered the transcoding ability as well in our DS214play review. The previous review can be referenced for what the process looks like.

In the first of our enterprise workloads, we measured a long sample of random 4k performance with 100% write and 100% read activity to get our main results. In this test, the DS216play had the highest read performance at 251 IOPS when using iSCSI, and did quite well writing with CIFS at 277 IOPS. However, the DS216se CIFS outperformed it in reading.

In average latency, the DS216play did best when reading with a score of 1,018.61ms when using iSCSI, doing far better than the DS216se CIFS did in this category. That said, the DS216play experienced higher latency when writing with both iSCSI and CIFS.

In max latency, the DS216play again had a better read score of 29992.0ms using iSCSI and 4386.0ms with CIFS, while the DS216se's CIFS score was far worse. The situation was different when writing this time, though, as the DS216play also had the lowest latency with a 3252.0ms score for iSCSI compared to a 5310.0ms score for the rival device.

Standard deviation saw the DS216play CIFS have the lowest read and write latency at just 147.46ms and 259.42ms. When using iSCSI, it didn't do as well in write latency as the DS216se, however.

Compared to the fixed 16 thread, 16 queue max workload we performed in the 100% 4k write test, our mixed workload profiles scale the performance across a wide range of thread/queue combinations. In this test, the DS216play iSCSI was the strongest performer by a wide margin with scores ranging between 218 IOPS and 246 IOPS. 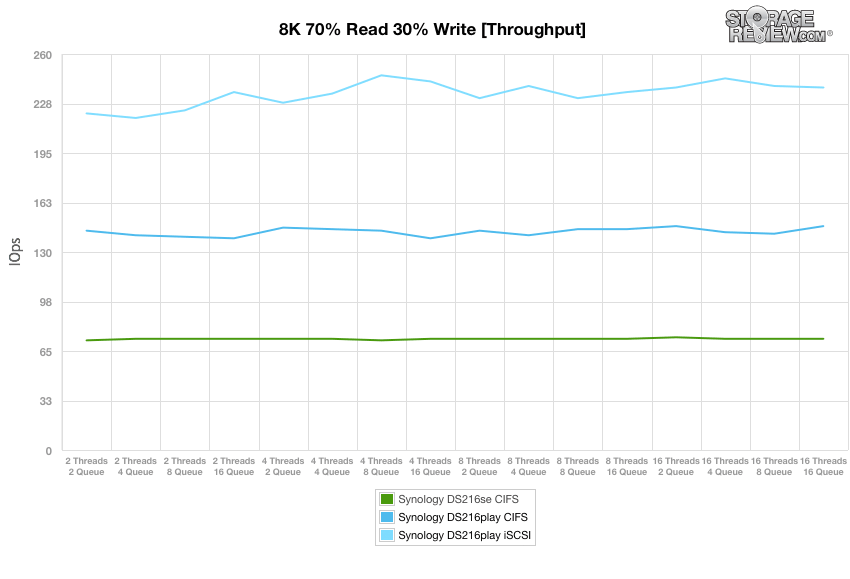 The DS216play iSCSI did the best in average latency, performing more consistently than this same device using CIFS and far better than the SD216se CIFS, which saw large spikes. 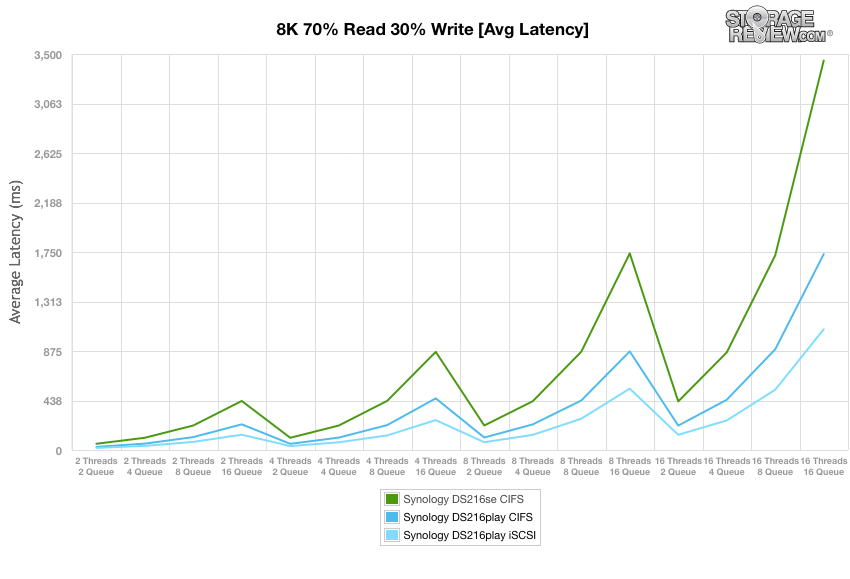 In maximum latency, the S216play iSCSI was again generally the best performer, but this NAS using CIFS was slightly better in some situations, and so was the DS216se. 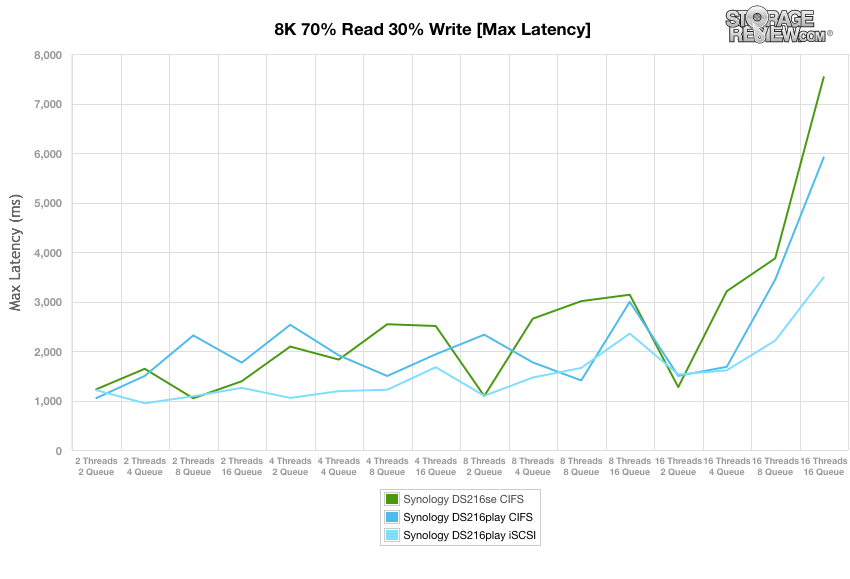 There was no clear winner in standard deviation, with all three configurations performing almost equally well. 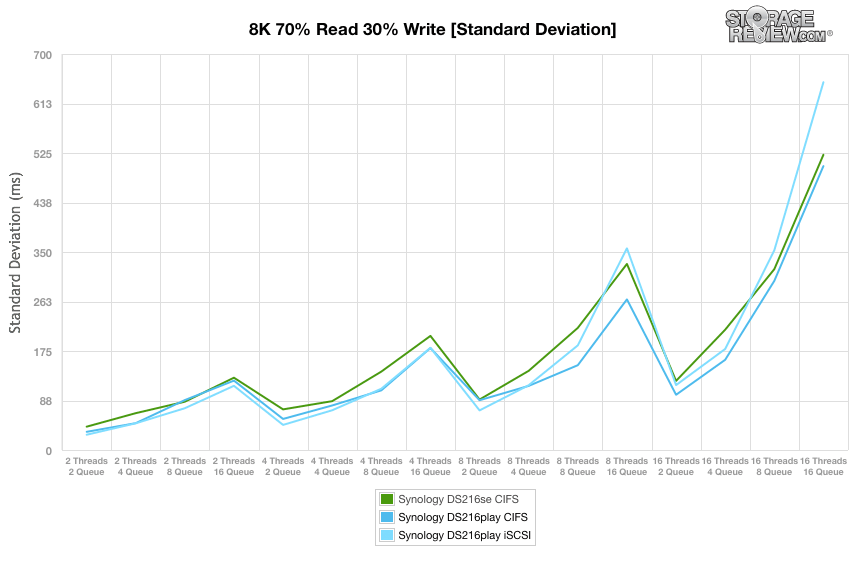 The last test in our Enterprise Synthetic Workload testing is the 128k test, which is a large block sequential test that shows the highest sequential transfer speed for a platter drive. Looking at the 128k performance of 100% write and 100% read activity, the DS216play CIFS had both the highest read speed at 115 MB/s and the highest write speed at 108 MB/s. On the other hand, this device using iSCSI has the lowest read sped at just 28 MB/s.

The Synology DS216play is a good option for multimedia enthusiasts who want an NAS that can handle 4K video at home, and also have the option of playing the same files on a tablet or phone at a lower resolution. The DS216play comes with a 1.5GHz dual-core processor, 1GB of DDR3 RAM, and up to 16TB of capacity. When compared to the earlier DS214play, this manufacturer has made improvements in a number of other areas, including reduced noise and lowered the power requirements while also dropping the suggested price almost 20%. At the same time, some of the predecessor's features were left out, like an SD card slot.

The DS216play has decent 4K throughput performance with 251 IOPS read and 211 IOPS write in iSCSI configuration. The NAS gave us strong latency results with average latency scores of 1,018.61ms read and 921.16ms write and max latency speeds of 3252.0ms write and 29992.0ms read. Where the DS216play really shined was in our 8k read and write performance when using CIFS giving us results of 8079 IOPS read and 5891 IOPS write. It also did quite well in out mixed workload test, especially when using iSCSI. In our 128K test we saw speeds of 115MB/s read and 108MB/s write in CIFS configuration.

The DS216play is an ideal NAS for the multimedia enthusiast or amateur video editor, with enough storage and speed to satisfy most uses.