Synology has a tradition of delivering excellent high-performance Network Attached Storage products that are both flexible and affordable. The last time we took a look at a 3.5″ hard drive based Synology DiskStation was last year, when we gave the DS411+ a shining review because of its incredibly easy-to-use setup and accompanying software. Today, we are reviewing the DS712+, Synology’s latest performance-oriented 2-bay model.

Synology has a tradition of delivering excellent high-performance Network Attached Storage products that are both flexible and affordable. The last time we took a look at a 3.5″ hard drive based Synology DiskStation was last year, when we gave the DS411+ a shining review because of its incredibly easy-to-use setup and accompanying software. Today, we are reviewing the DS712+, Synology’s latest performance-oriented 2-bay model.

The new model supports the latest DSM 3.2 software and is aimed at SMB users who need high speed, robust software and future scalability. The Synology is sold without hard drives and carries a street price of $450. 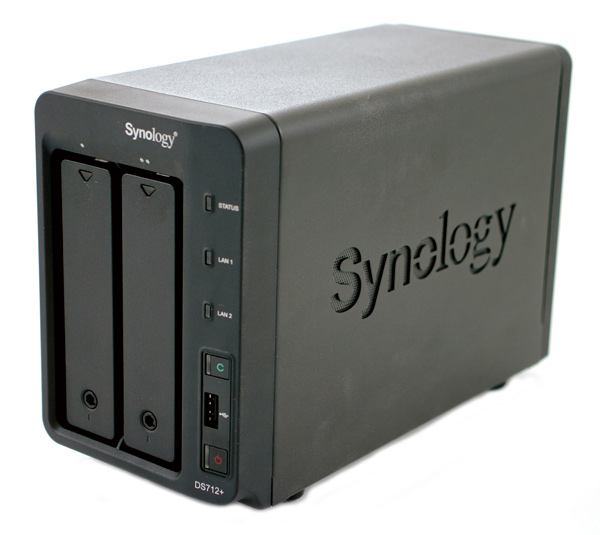 The DS712+ has an excellent build quality. It has a sleek, matt black finish and is about the same size as its predecessor, the DS710+. The chassis and cover are metal while the front and rear panels drive trays and the internal slides are plastic, most likely to diminish drive vibration noise. You will notice that the DS712+ now has the drives loading from the front rather than the rear entry that the DS710+ had, which allows for easier HDD access. Each bay can also be locked to secure it from curious hands or to prevent accidental drive removal. Another change you’ll notice is that VGA port the DS710 had is now gone. 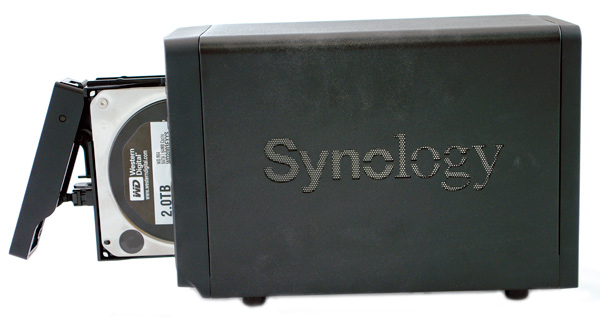 Aside from the drive bays, the front of the unit has an LED indicator to show drive activity. There are also two LAN LEDs for its gigabit ethernet ports along with a status indicator. At the bottom right, there is a power button/light and a dedicated copy button, which, when pressed, pulls content from an external drive plugged into the front USB 2.0 port to a preset folder. 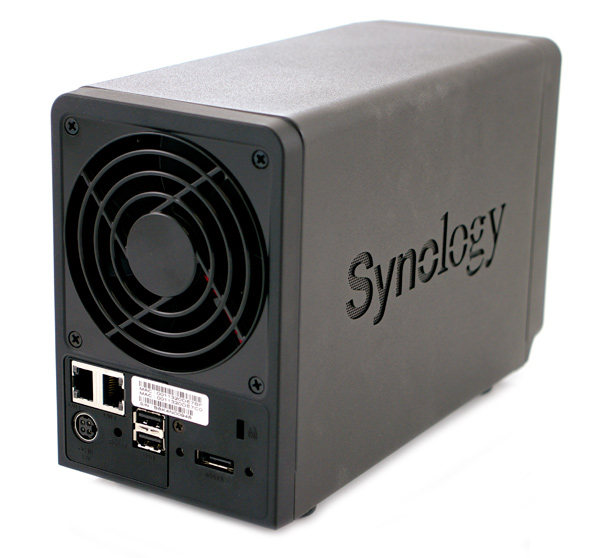 A large 92mm fan is located at the rear panel. Below the fan is a pair of USB 2.0 and Gigabit ethernet ports in addition to an eSATA port and power input. Since one of the prominent selling points is its dual ethernet ports, it would have been preferable to have two cables included in the deal, instead of just one. This is just a minor nitpick, however as most buyers will have an abundance of ethernet cables lying about.

Setting up the DS712+ is very straightforward. The installation process begins by inserting either one or two hard drives into the hot-swap bays. Once you have secured them into the bays, you must run the DiskStation Assistant, which configures the drives and installs your operating system. Simple and fast! 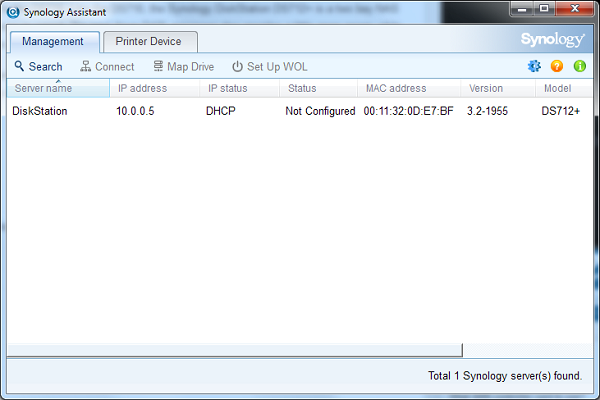 To use DiskStation Manager, you must connect to the DS712+ via a web browser. Since our last Synology DiskStation review, the software has been upgraded from 3.0 to 3.2, which offers a wide range of new and improved features.

The DiskStation Assistant software is provided on a CD or is downloadable on the Synology’s website and gives you the option to create the Synology Hybrid RAID volume at the first-time DSM installation on your DS712+. 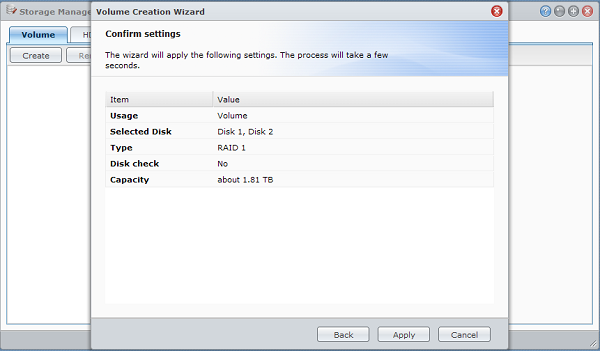 Once you’ve set up the DiskStation Assistant software, it automatically detects the DS712+ and allows you to install the latest firmware. For the average person, this means you never have to worry about having the latest software, since you will be installing the newest firmware as part of the initial setup. The Synology system is also unique in the way that it stores the operating system spanned across all the drives, instead of just a single one. This protects your data and keeps the NAS up and running, regardless of which drive might fail.

The huge selling point of the Synology NAS units is the extremely well-designed DiskStation Manager software. In our previous review of the DS411+, we had the chance to use DSM 3.0 software, but since then they have updated to 3.2 as I mentioned above. A few improvements have been made to the newest version, such as the Package Center, which makes it much easier to find and load optional features. It also gives customers a more efficient and intuitive experience in areas such as business convergence and management efficiency and also now supports Mac OS X Lion. 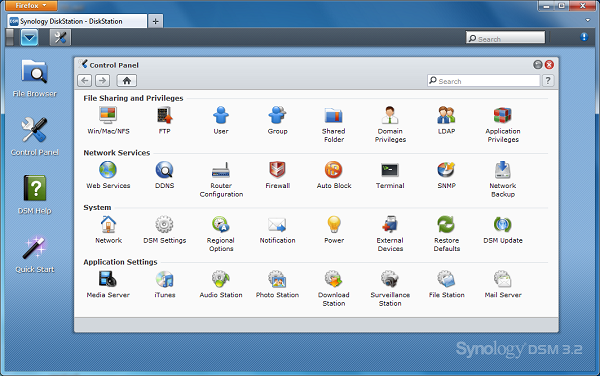 Synology has created a live demo, which is available on its official website.

Some of the other 3.2 features include:

To test and compare the performance of the Synology DiskStation DS712+, we put it head-to-head with the DS411+ using both the 2TB and 6TB configurations. We measured the speed of these NAS units with IOMeter, using shares setup over iSCSI and Samba. We used four Hitachi Ultrastar A7K2000 2TB hard drives in the DS411+ and the supplied Western Digital 2TB RE4’s inside the DS712+ to make sure the drives were never a limiting factor in our benchmarks.

Compared to the DS411+, the DS712+ has a few features that should improve performance: the CPU speed and newer RAM. The DS411+ has a dual-core 1.67GHz processor and 1GB of DDR2 RAM whereas the DS712+ has a slightly faster CPU speed of 1.8GHz with 1GB of DDR3 memory.
In the first test, we will look at the peak Samba and iSCSI performance using a “best case scenario” 2MB sequential file transfer with IOMeter. In all of the configuration Samba interface configuration schemes, the DS712 fell behind the DS411+ with an average read speeds of 55MB/s for both its models compared to its competitors’ 66MB/s. The Write speed tests showed slightly better results for its 2TB and 4TB drives, giving 98 and 101 MB/s write speeds respectively. 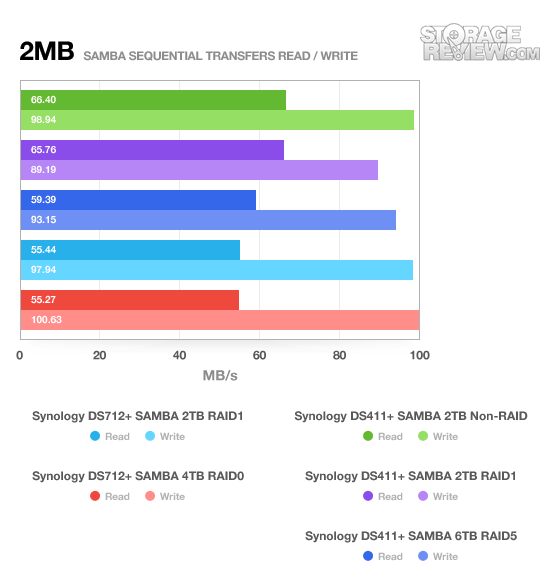 The iSCSI performance tests were much better however, with the DS712+ boasting read speeds of up to 87.6 MB/s and write speeds ranging from 107 to 108MB/s. 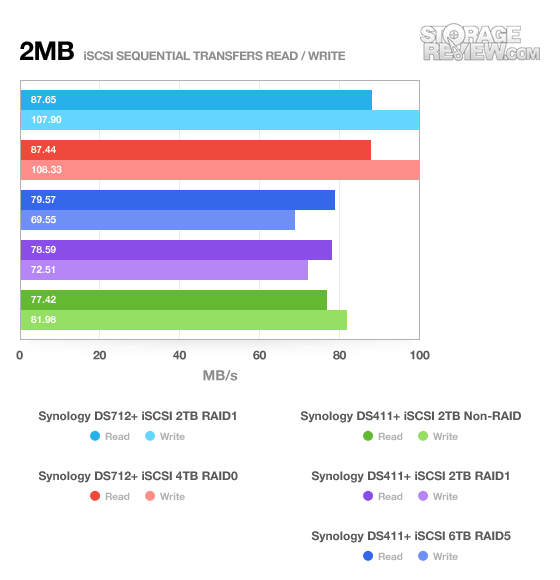 In the next test we looked at random 2MB/s transfers using IOMeter. In this section the Synology DS712+ performed at less than half the read speeds of the DS411+ ranging between 15 to 19MB/s, with the peak speed on the RAID0 test. Vast improvement was found during the Write speed tests, however, which ranged from 40 to 49MB/s; the highest recorded speed occurred during RAID0 test. 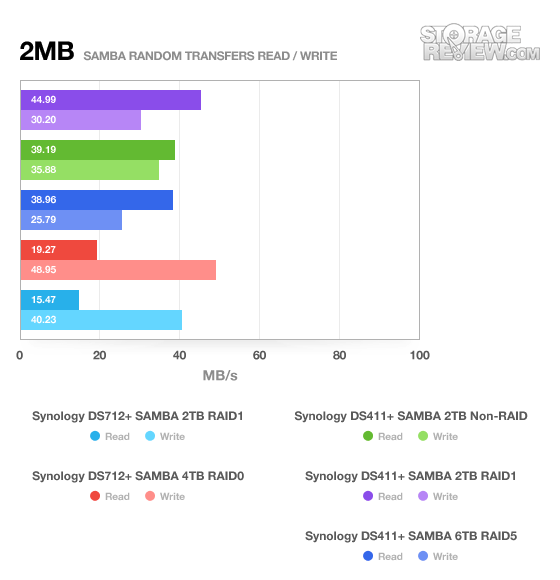 Looking at the iSCSI results in the same 2MB random transfer tests, the tables have turned with the DS712 leading the pack in all tests, especially with Write speeds. This time around, the read speeds varied between 68 and 65MB/s (highest on RAID1) and blistering write speeds from 104 to 108MB/s (highest on RAID0). 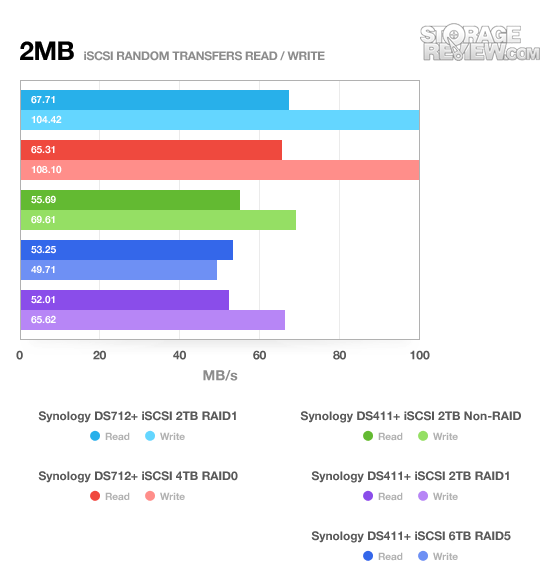 Moving to even smaller transfer sizes with the random 4K transfers, the DS712+ continues to do well, significantly outperforming the DS411+. Read speeds varied between 0.66 to 0.71MB/s and write speeds from 0.54 to 0.69MB/s. RAID1 had the faster Read speed while RAID0 took the lead in Write column. 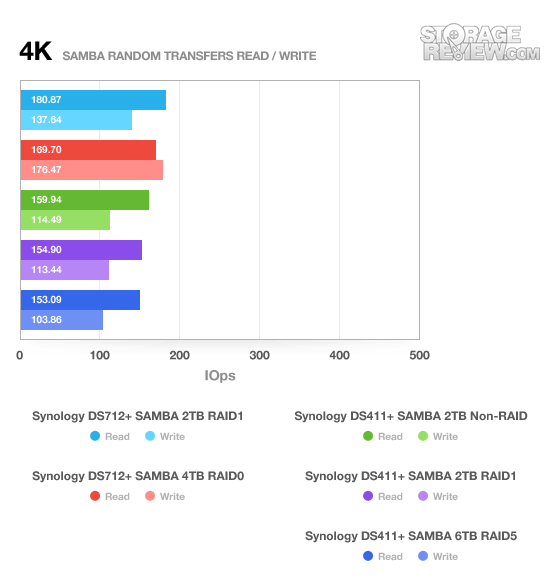 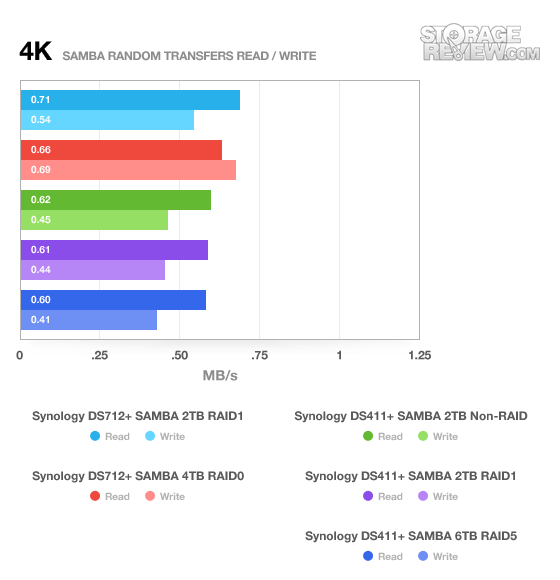 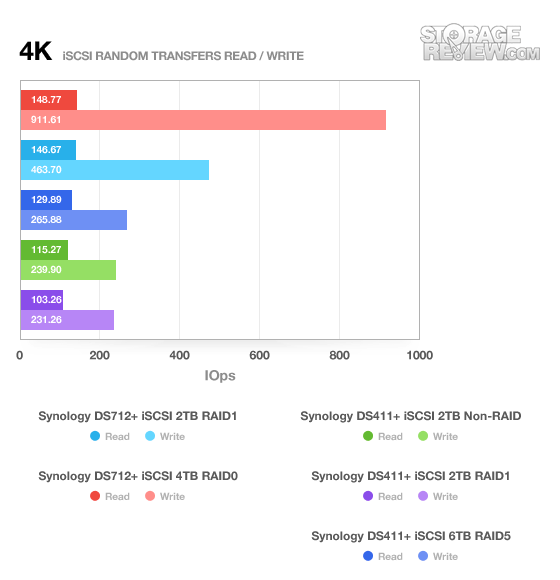 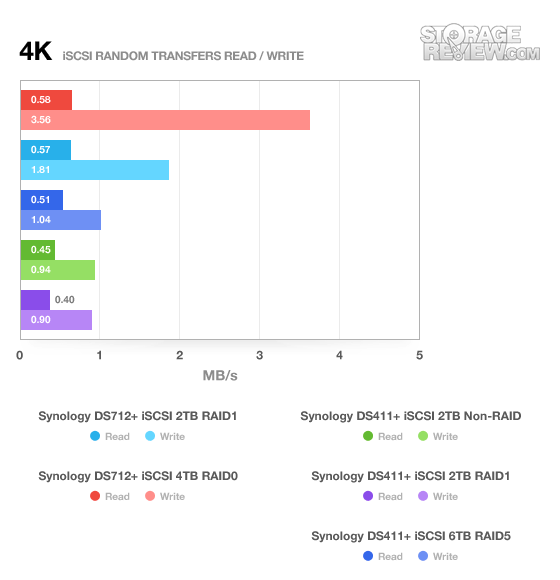 With the Synology DiskStation DS712+ having such a lead on the DS411+ in random 4K write speeds, it was no surprise to see it leading the charts in the 4K write latency test. Using Samba, the latency varied between 5.67 and 7.26ms. However, the max latency did suffer much higher peaks, with its max actually reaching over nine seconds in the 2TB RAID1 array. 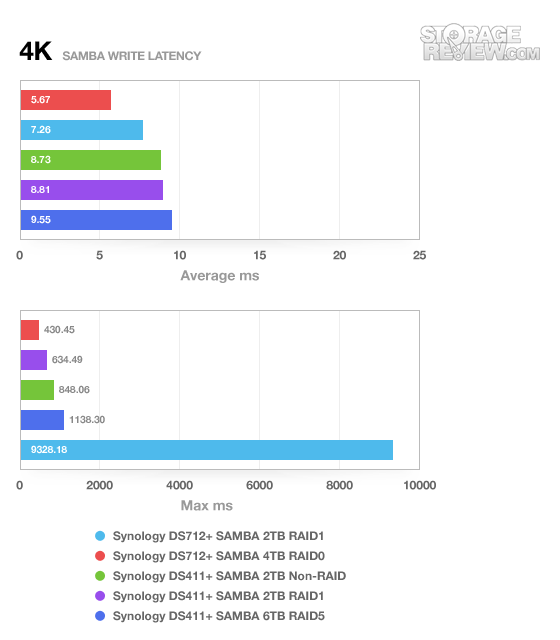 Using iSCSI, the DS712+ average 4K latency numbers performed significantly better compared to its Samba results. We measured times as low as 1.01ms on the RAID0 array to 2.16ms on the RAID1 array. Its max latency also vastly improved. Overall we were very impressed by the random transfer performance of the Synology DS712+ 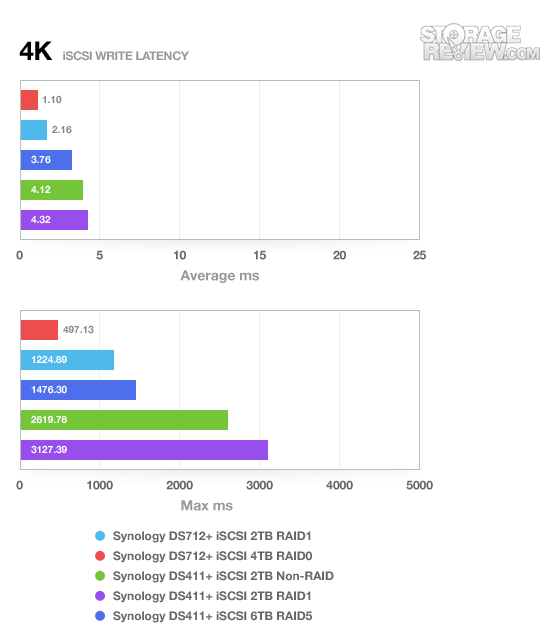 One of the best reasons to consider a small embedded platform NAS for home or small business network-storage is the low power consumption. Though a desktop could serve a similar purpose, it would never be as efficient or have the very handy accompanying software. Synology rates the DiskStation DS712+ with a peak access rate of only 27.5W and a hibernation (drives spun down) rate of 17.6W. In our tests we found access requirements to be slightly higher than specified, although some of that could vary depending on what drives were used. Hibernation power draw as you will see below was incredibly close. 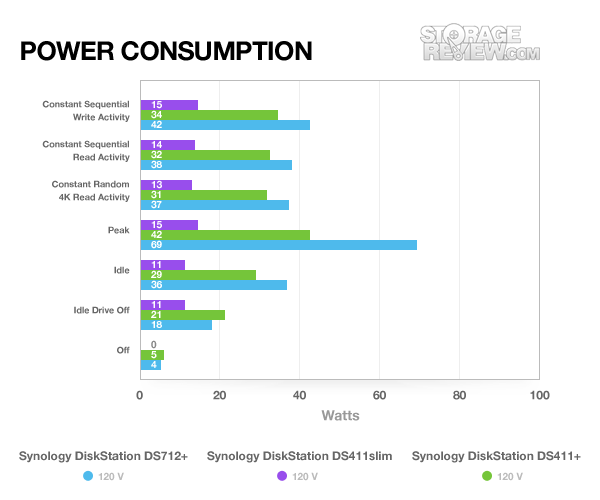 To test the power consumption we used a Kill-a-Watt power meter and IOMeter to simulate disk loads during normal activity. The highest measured power consumption from the DS712+ reached 69 watts for a several seconds. This was significantly higher than the DS411+ and DS411+slim, which recorded a peak of 42 and 15 watts respectively. After the system was up and running, rates varied between 42W at idle to 36W under constant sequential write access. The DS712+ did, however, have the slightly lower reading of 4W when the NAS was completely powered down.

The DiskStation DS712+ is a decent performance step up from the last 3.5″ Synology NAS we reviewed. The processors are similar in speed, offering a 1.8GHz dual-core processor; however, the RAM has been updated to DDR3 with 1GB of total memory. The DS712+ is also compatible with Synology’s DX510 Expansion Unit offering five additional bays, which plugs in via eSATA creating a maximum possible total of 21TB. This won’t be a cheap setup, however; the DS712+ has a retail price of $499.99 for the small-business class model and the DX510 is an additional $499.99, both of which do not include hard drives.

The DS712+ is about all about performance and simplcity. If you want faster speeds, more power to handle background applications and with a more fluid experience, the DiskStation DS712+ certainly does provide many enhancements over the consumer targeted models. The DSM 3.2 software is also a great perk and is far beyond any other NAS interface we’ve used. It will let you do virtually anything you would expect, with a easy to understand GUI that guides along the way.

Overall, we liked the build quality, sleek design, performance, and features of the Synology DS712+, which offers a highly-flexible solution to new and upcoming businesses or professionals who don’t need the storage capacity offered by Synology’s larger devices.