The Synology DS1512+ is a 5-bay NAS designed for small business use that features a dual core 2.13GHz processor, 1GB of RAM and Synology’s DiskStation Manager (DSM) software. Synology sells their NAS units without disks, so users purchase the enclosure and add any combination of 2.5″ or 3.5″ drives they wish. While the entry-NAS market for even the SMB space typically have 4-bays, the 5-bay option from Synology is nice in that the system is better geared towards handling two drive failures with RAID6, offering a little extra data protection in the event a drive dies during RAID rebuild. The DS1512+ is designed to grow as well, with expansion support of 5 or 10 more bays via eSATA and Synology’s DX510 expansion units for total capacity up to 60TB.

The Synology DS1512+ is a 5-bay NAS designed for small business use that features a dual core 2.13GHz processor, 1GB of RAM and Synology’s DiskStation Manager (DSM) software. Synology sells their NAS units without disks, so users purchase the enclosure and add any combination of 2.5″ or 3.5″ drives they wish. While the entry-NAS market for even the SMB space typically have 4-bays, the 5-bay option from Synology is nice in that the system is better geared towards handling two drive failures with RAID6, offering a little extra data protection in the event a drive dies during RAID rebuild. The DS1512+ is designed to grow as well, with expansion support of 5 or 10 more bays via eSATA and Synology’s DX510 expansion units for total capacity up to 60TB. 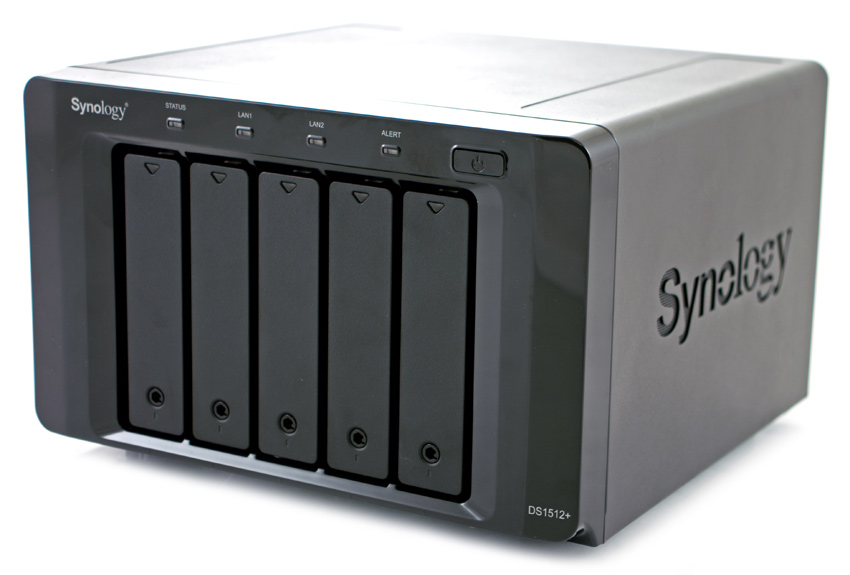 Like other Synology products, the DS1512+ has a tremendous amount of flexibility. While many organizations will simply create individual folders for users and shared folders for group resources, the DS1512+, that’s the baseline. The unit supports iSCSI, CIFS and NFS, amongst others, and can handle moderate virtualization needs from VMware, Hyper-V and Citrix. Of course DSM 4.1 supports much more, allowing organizations to use features like video surveillance, web serving tools and a file server to name a few.

In addition to supporting two expansion drive enclosures, the DS1512+ supports RAM expansion up to 3GB and can handle attached storage via two USB 3.0 ports or four USB 2.0 ports. The unit has dual Ethernet ports that can be set up in aggregation mode for failover and performance benefits. Synology offers a three-year warranty on the enclosure, which carries a street price of around $799.

Considering aesthetics, the DS1512+ picks up on the more stylish and refined design started earlier this year for the business SANs. The body is black painted metal, with high gloss plastic face and matte black drive trays. There are activity lights across the top front of the unit, along with the power button, overall delivering a minimalistic appearance. The upshot is the unit looks good enough to site on a desk or in a telco room, either way it won’t be out of place. 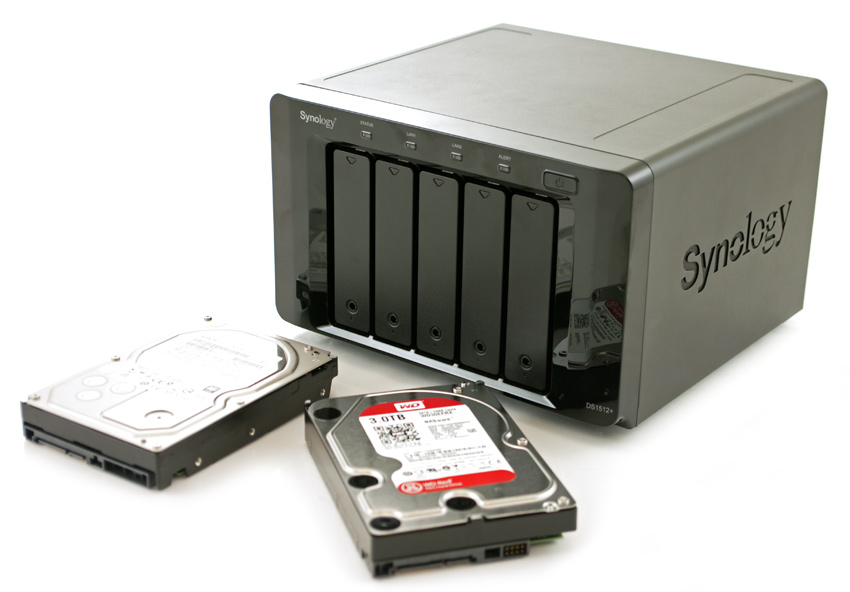 The DS1512+ uses standard 3.5″ drive trays and the five bays are all hot swappable. Mounting screw holes for both 2.5″ and 3.5″ drives are provided and of course drives can be mixed and matched to fill the five bays. Unlike previous designs Synology has used in the past, all drives are accessible without removing any covers from the chassis. 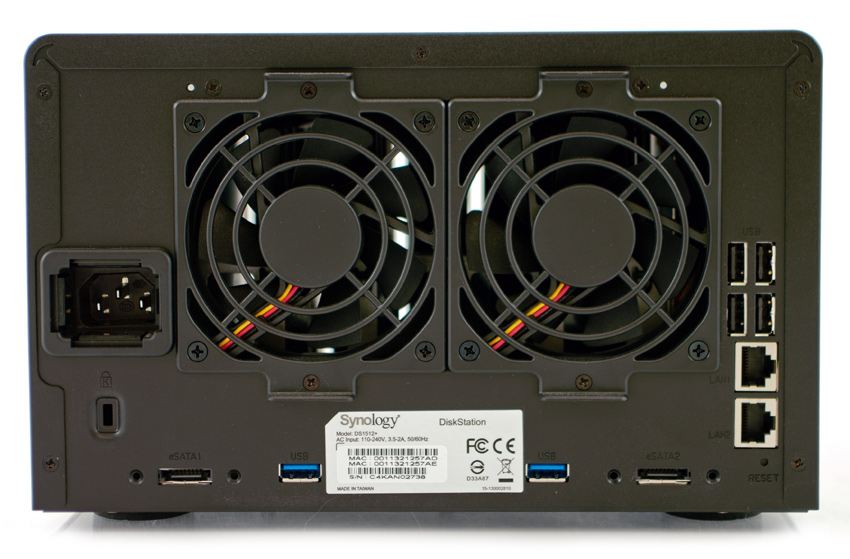 The rear of the unit encompasses dual 80mm fans, along with all of the access ports; 2xEthernet LAN, 2x eSATA, 2x USB 3.0 and 4X USB 2.0. The back also provides a Kensington lock slot and power connection.

When it comes to testing enterprise hardware, the environment is just as important as the testing processes used to evaluate it. At StorageReview we offer the same hardware and infrastructure found in many datacenters where the devices we test would ultimately be destined for. This includes enterprise servers as well as proper infrastructure equipment like networking, rack space, power conditioning/monitoring, and same-class comparable hardware to properly evaluate how a device performs. None of our reviews are paid for or controlled by the manufacturer of the equipment we are testing.

Our current 1GbE Ethernet NAS testing infrastructure consists of our Lenovo ThinkServer RD240 testing platform equipped with Intel’s quad-port 1GbE PCIe adapters connected through Netgears’s 24-port 1GbE switch. This environment allows the storage device we are testing to be the I/O bottleneck, instead of the networking gear itself.

In our enterprise testing of the Synology DiskStation DS1512+, we tested performance in iSCSI mode with multipathing enabled utilizing both 1GbE LAN ports. Each workload has the Synology interacting with a 50GB LBA target device. For tests with 100% read activity, preconditioning is with the same workload, although flipped to 100% write to minimize the impact of onboard cache.

At this time Enterprise Synthetic Workload Analysis includes six profiles, three of which are mixed, that attempt to reflect real-world activity. These were picked to have some similarity with our past benchmarks, as well as a common ground for comparing against widely published values such as 8K 70/30 commonly used for enterprise testing. We also included two legacy mixed workloads, including the traditional File Server and Webserver offering a wide mix of transfer sizes.

Our next section changed to a mixed workload consisting of 8K transfer sizes with a ratio of 70% read to 30% write. Across the board the 7,200RPM Hitachi Ultra Stars offered the lead in performance over the power-friendly WD Red hard drives. That difference in rotation speed works out to about 25% high throughput. 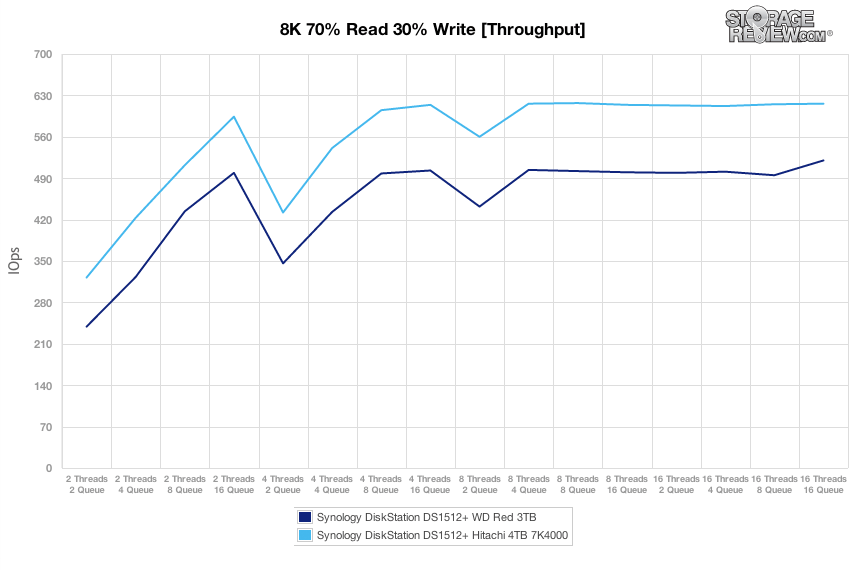 Comparing average latency, both hard drive arrays really offered a sweet spot at the lower 2T/2Q and 4T/2Q loads, before latency started to significantly pick up. 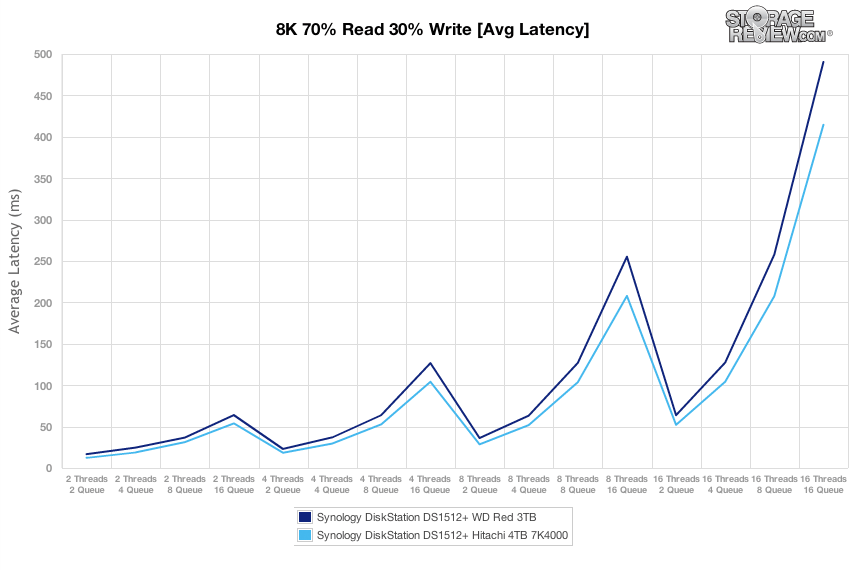 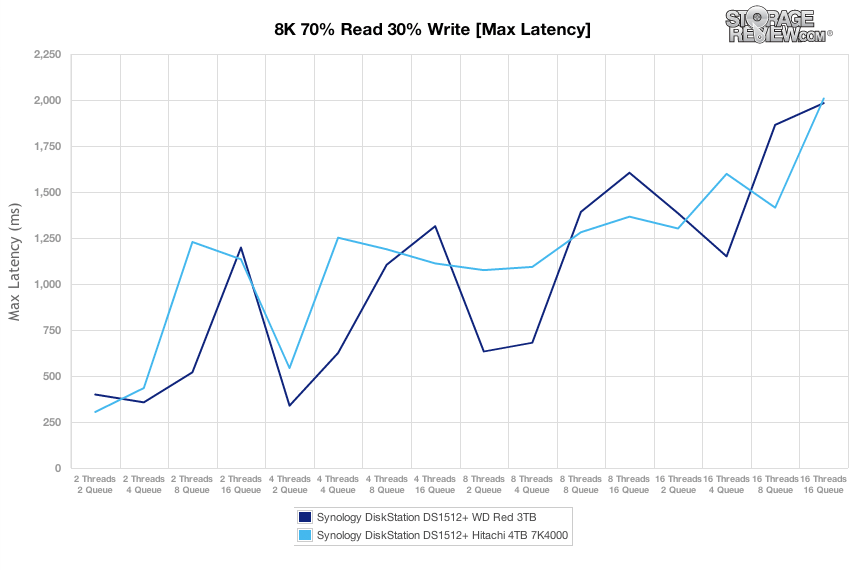 Drilling into latency standard deviation, the WD Reds offered a small advantage in latency consistency, although as the loads increased the 7K4000s offered the edge. 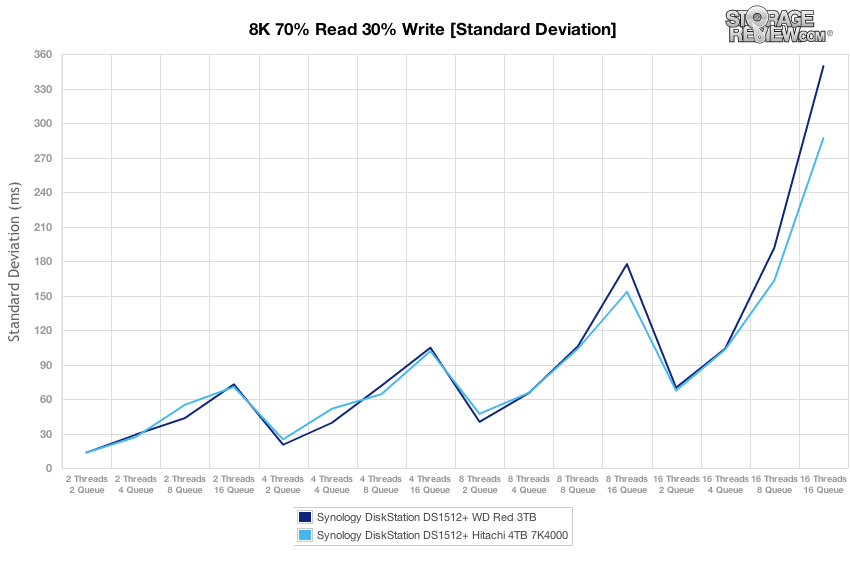 The next workload is our File Server profile, which covers a wide range of transfer sizes spanning from 512b to 512K. With the wide transfer size and the higher concentration of write activity, the 7,200RPM Hitachi Ultrastars offered about 30% higher performance across the board over the power-friendly WD Reds. 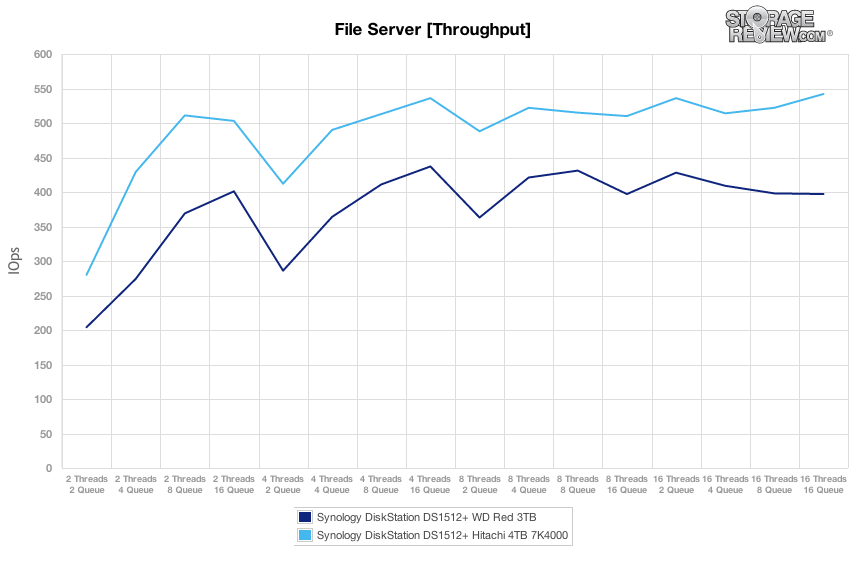 The queue depth speed spot for both RAID5 drive arrays is up to about an effective queue depth of 16 before latency takes off. 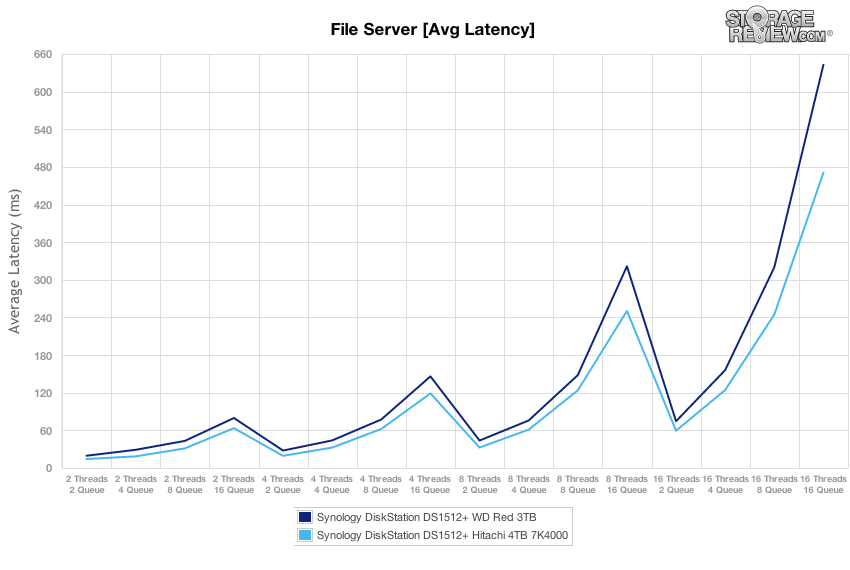 Comparing max latency, while the average latency didn’t pick up as much going above an effective queue depth of 4, the max latency picked up significantly. 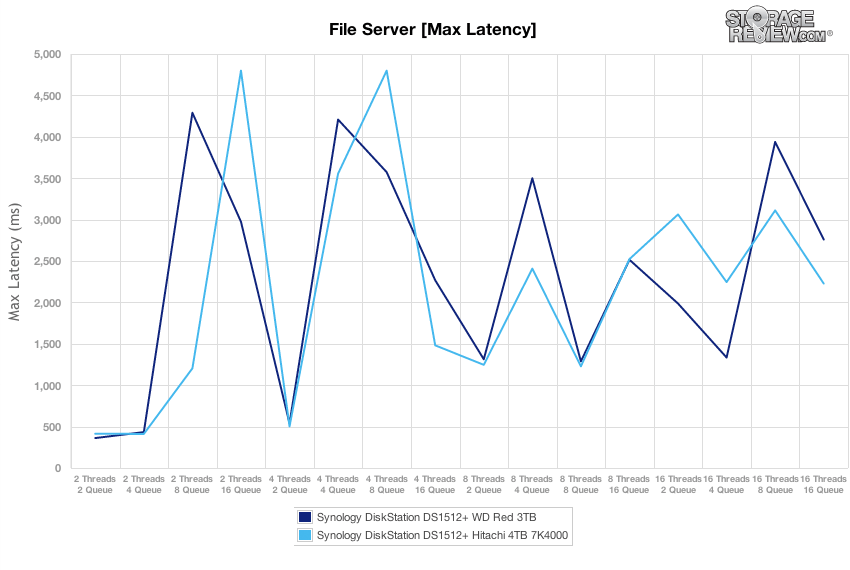 Unlike the 8K 70/30 workload, the faster 7,200RPM hard drives offered the most consistent latency across the board in the File Server workload. 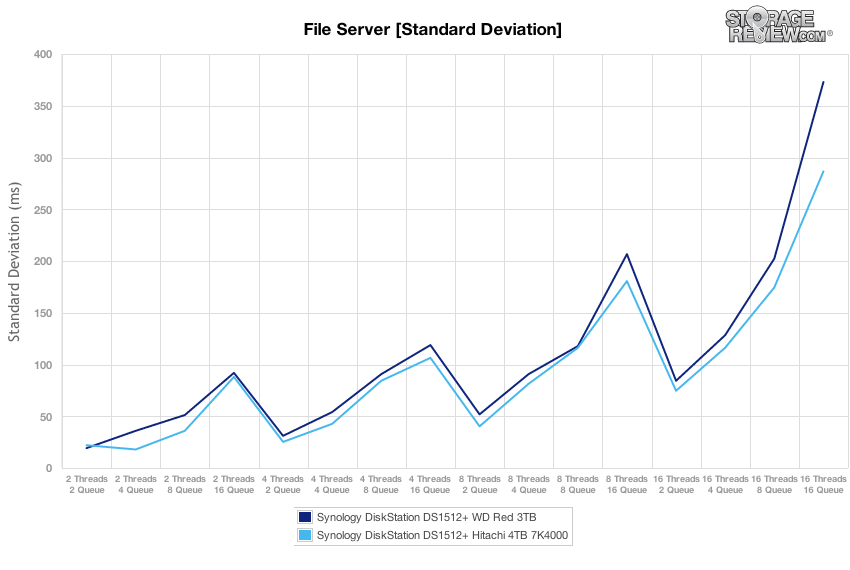 In our read-intensive Web Server profile, the Hitachi Ultrastar 7K4000s offered about a 40% boost in performance over the low-power WD Reds at the highest workloads, which dropped to about 30% at the lower and more realistic effective queue depths. 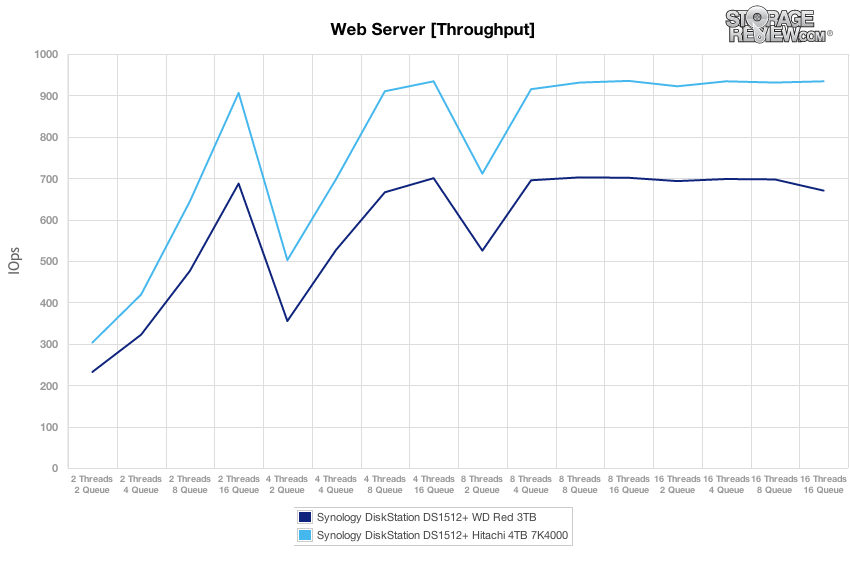 Looking at average latency, the Synology DS1512+ loaded with 7200RPM or 5400RPM hard drives had its sweet spot extending upwards to an effective queue depth of 32 before latency more than doubled. 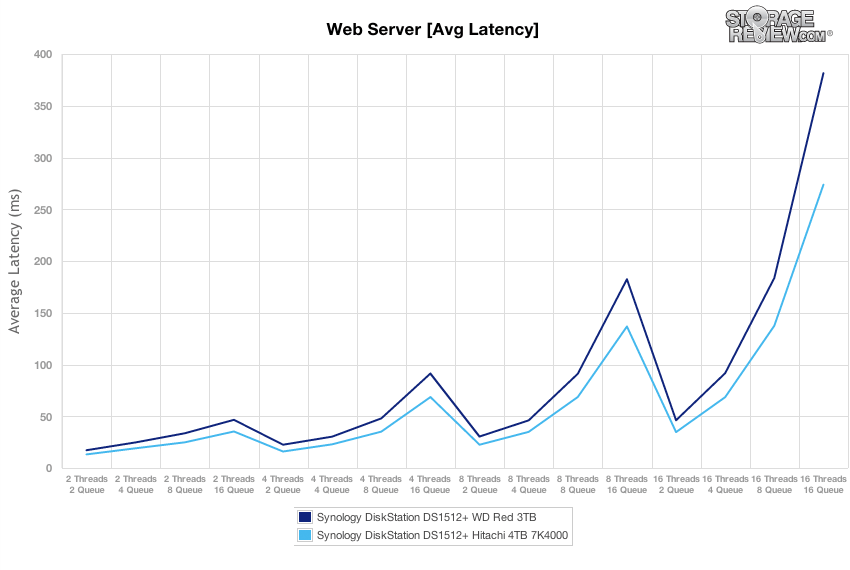 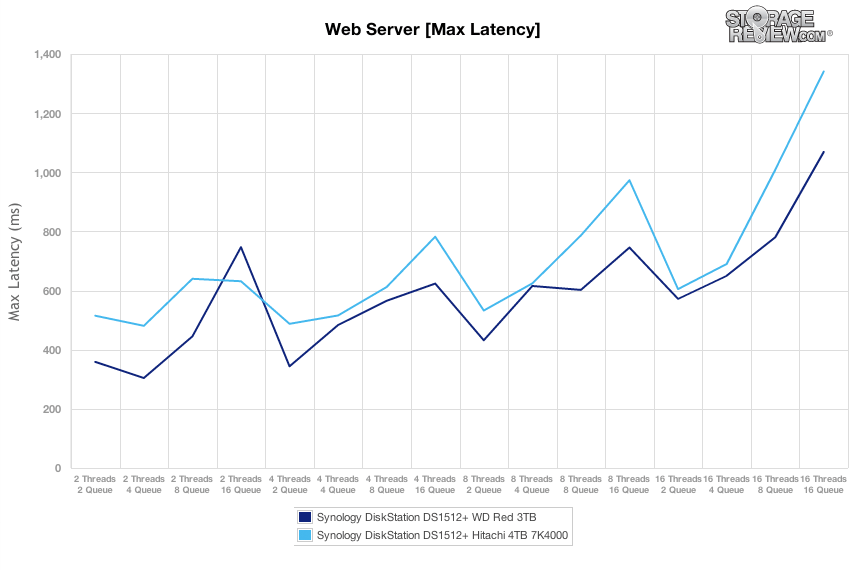 Comparing latency consistency between both drive arrays, there was less of an advantage with the faster drives at lower queue depths, although the benefit became more pronounced at thread stages where queue depth was either 8 or 16. 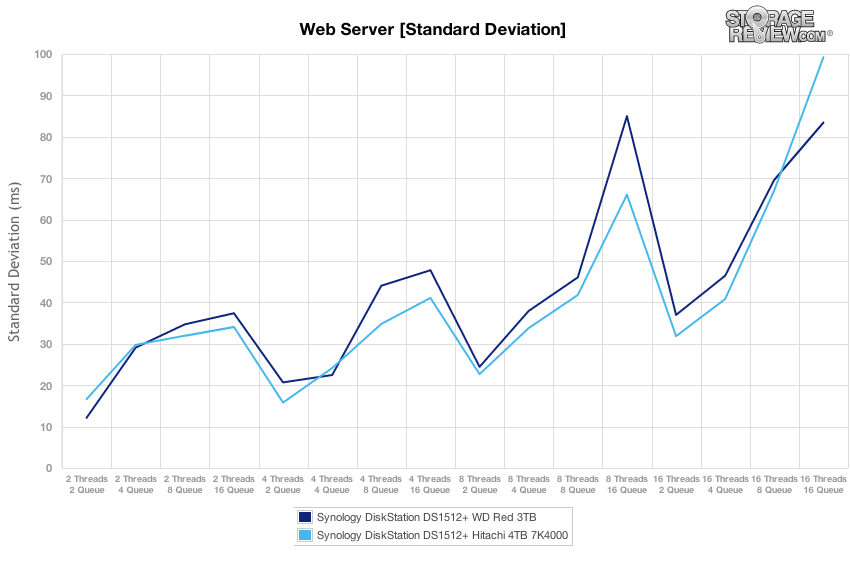 We’ve praised Synology in the past for delivering a robust management layer and tools on top of an enclosure that has enough horsepower to perform both home and small business tasks. The DS1512+ is no different, it’s easy to set up, use and if aesthetics are important, looks substantially better than some of Synology’s earlier efforts. Setup took us under 10 minutes to go from diskless to software loaded and building our RAID5 array on both drive arrays we tested with. With software loaded during the installation process, you never have to worry about having to update the system right off the bat. Hardware support is also easily handled through the front-accessed hot-swap hard drive trays, allowing users to easily swap out a drive if one were to fail after it was put into service.

We tested the DS1512+ with both WD Red drives, designed exclusively for NAS use with eight bays or less, and higher performing Hitachi Ultrastar 7K4000 enterprise hard drives. Users performing single-threaded transfers with high levels of sequential access will most likely not see the benefit of purchasing 7200RPM hard drives over low-power models such as the WD Red drives. That equation starts to tip in favor of faster hard drives when you start factoring in multiple workstations accessing it, where five 4TB Hitachi Ultrastar 7K4000s offered gains of 25-40% depending on the workload. Both offer great performance for their prospective environments, it just comes down to what makes sense given the workload and overall budget.

The Synology DS1512+ offers business users a robust 5-bay NAS that performs well and is easy to operate. With more features than most will ever use, the DS1512+ is a flexible option for small/remote offices that need a combination of performance and easy of management.