Western Digital RAID Edition (RE) 4TB Enterprise drive takes the RE family to the 4TB capacity limit. The new drive offers a SATA 6Gbps interface with RAID-specific, time-limited error recovery (TLER), dual actuator technology, enterprise build quality to name a few of the features that make the Western Digital RE’s ideal for Enterprise users looking for the fine balance between performance and capacity.

Western Digital RAID Edition (RE) 4TB Enterprise drive takes the RE family to the 4TB capacity limit. The new drive offers a SATA 6Gbps interface with RAID-specific, time-limited error recovery (TLER), dual actuator technology, enterprise build quality to name a few of the features that make the Western Digital RE’s ideal for Enterprise users looking for the fine balance between performance and capacity. 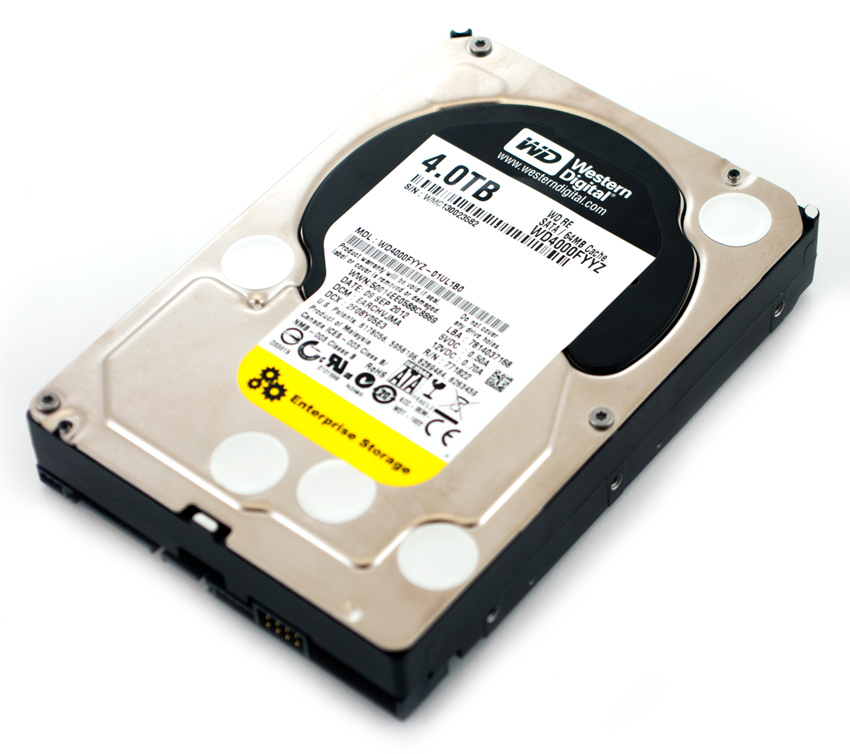 With 4TB capacity, these drives are ideal for bulk storage duties, such as JBODs, compute servers, video surveillance and other demanding write-intensive applications. With Western Digital’s stated field-tested 1.2 million hour MTBF, the drive is expected to deliver the highest level of reliability for 24×7 operations. To build upon the reliability, Western Digital puts the drives through extended burn in testing with thermal cycling to ensure reliable operation. This reliability is what allows Enterprise have confidence and security that their operations won’t be effected by data failures or drive failures that could cripple an operation.

With the growing trend toward Cloud-based servers, companies are looking for more and more higher capacity drives and the manufacturers are responding with 4TB capacities and rumored 6TB to 8TB drives down the road. The market is already filled with offerings from Hitachi, Seagate and Toshiba in 4TB capacities, so look for us to have reviews of these down the road.

The Western Digital RE hard drives have little difference in appearance from their consumer counterparts, except the nice bright yellow label stating “Enterprise Storage.” It is a nice touch just in case you have a bunch of drives in your spare parts box, as it would be difficult at first glance to tell what is Enterprise or what is a Consumer Western Digital Drive. 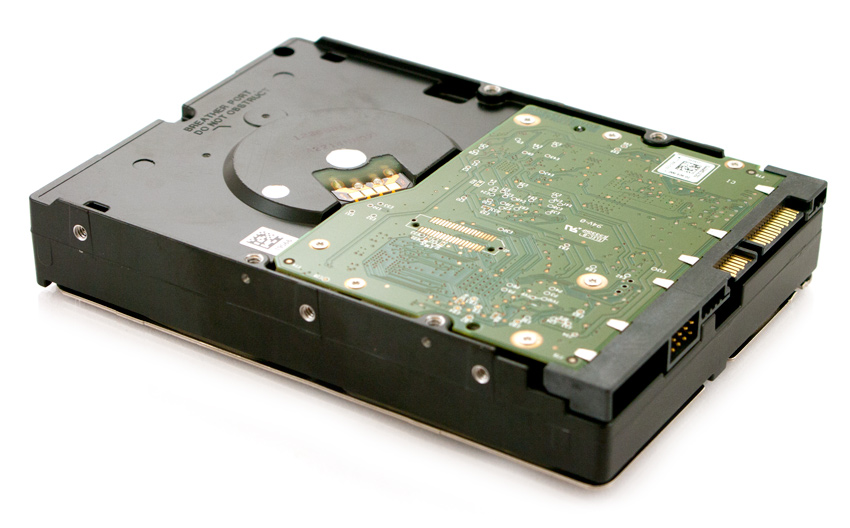 The Western Digital RE 4TB is a standard 3.5″ hard drive based on a SATA 6Gbps interface. We see the standard practice of Western Digital to place the heat-producing components in contact with the body of the drive. This allows things like the controller, RAM, and motor driver to dispense heat into the body acting as a large heat sink. Also, Western Digital makes use of a foam pad placed in between the drive and circuit board to help absorb vibration. 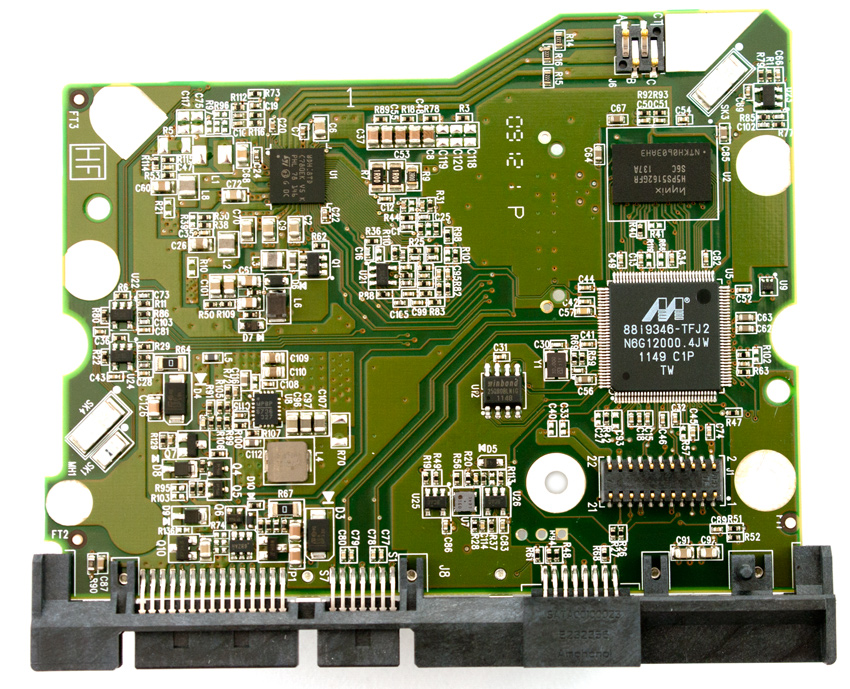 In our main average latency segment with a load of 16T/16Q, we measured an average read latency of 1837.48ms and a write latency of 1224.85ms from the Western Digital RE 4TB.

With just read activity, the Western Digital RE 4TB had a max response time of 4904.0ms, although with write activity max latency went up to 2833.0ms.

Compared to the fixed 16 thread, 16 queue max workload we performed in the 100% 4K write test, our mixed workload profiles scale the performance across a wide range of thread/queue combinations. In these tests we span workload intensity from 2 threads and 2 queue up to 16 threads and 16 queue. In the expanded 8K 70/30 test, the Western Digital RE 4TB came in the behind the other two drives throughout the test, with the Western Digital RE 2TB leading the pack. 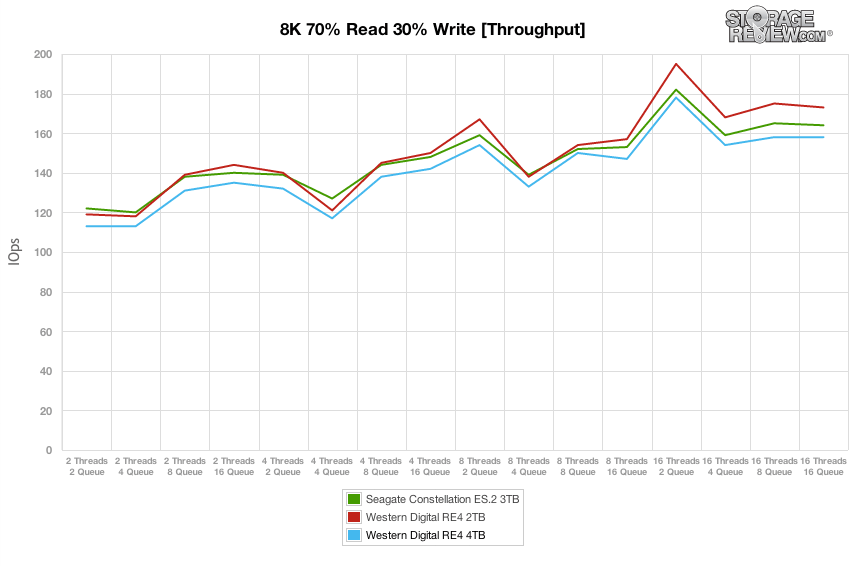 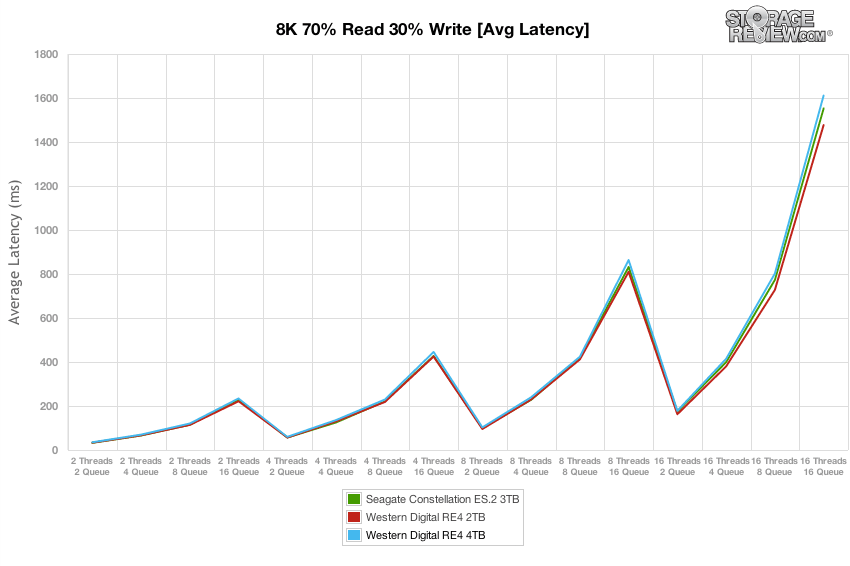 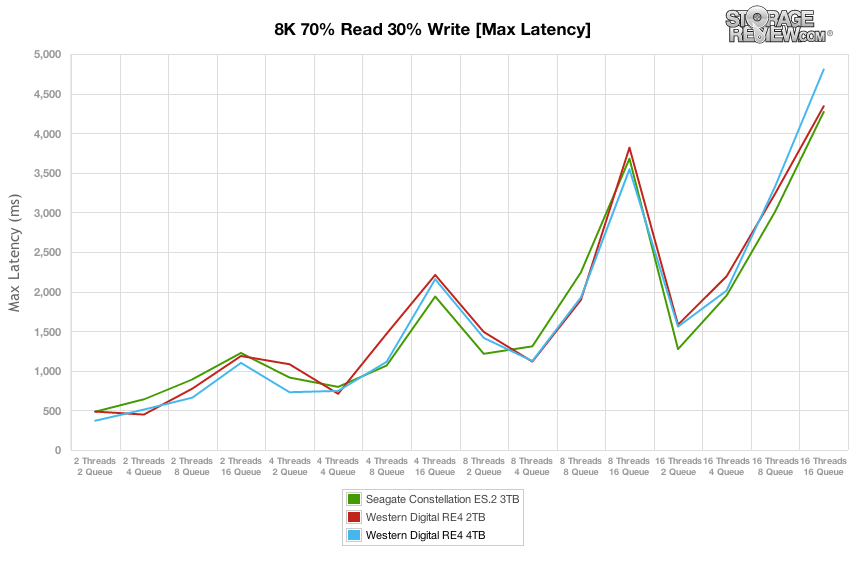 For the entire thread/queue spectrum, the Western Digital RE 4TB kept its latency fairly consistent and in line with the other two drives. 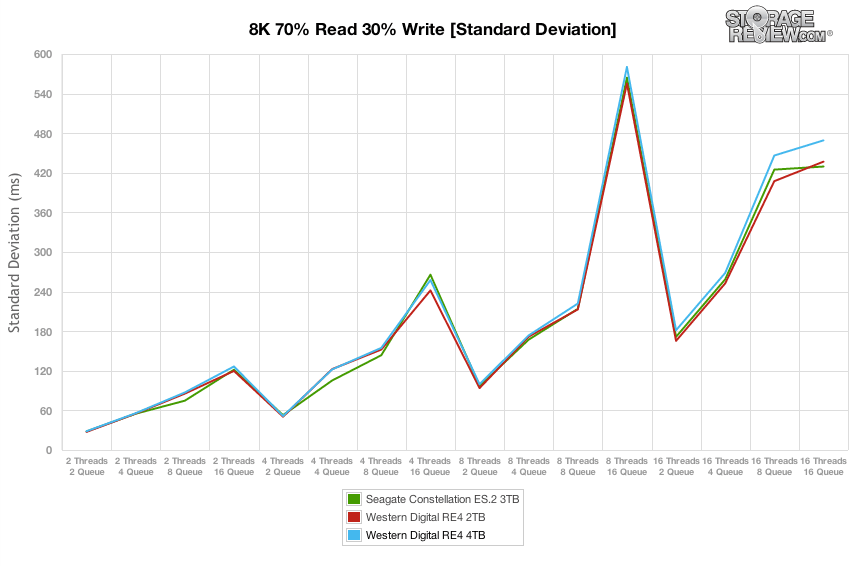 With the Western Digital RE 4TB, we have added a 128K test to our Enterprise Synthetic Workload. The test is a large block sequential test which shows the highest sequential transfer speed for a platter drive. Taking a look at 128K performance of 100% write and 100% read activity, the Western Digital RE 4TB measured 151964 KB/s read and 149886 KB/s write, which outpaces the other drives in both read and write activity.

The next workload we used is our File Server profile, putting the drives through a varying workload, where we scaled the thread and queue count from 2T/2Q up to 16T/16Q. In this profile, the Western Digital RE 4TB ranked middle of the pack, while being outpaced by the Western Digital RE 2TB at its peaks, though it slightly outpaced the Seagate Constellation ES.2 3TB at higher thread/queue counts. 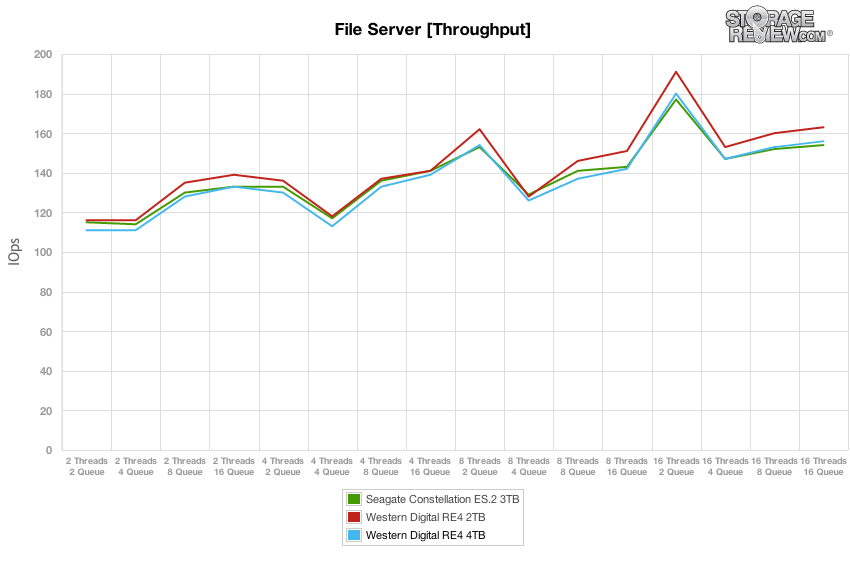 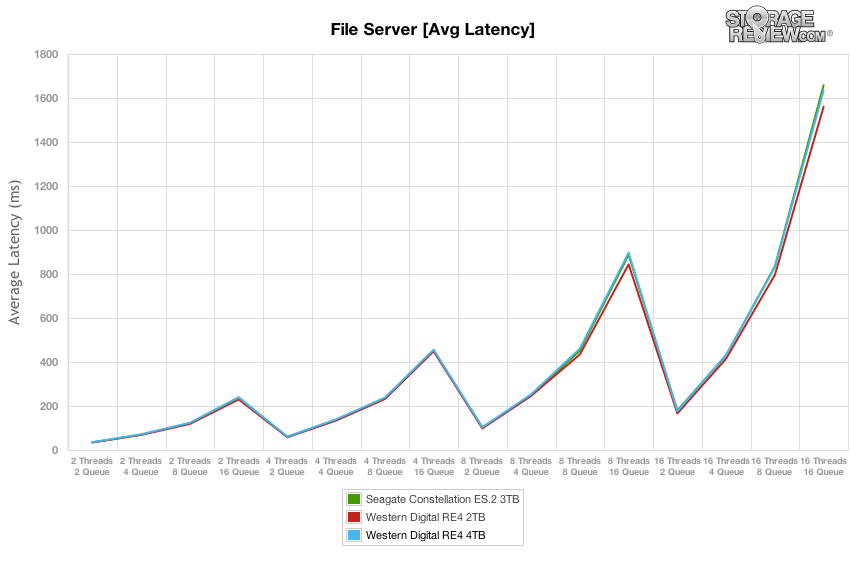 Comparing peak response times in our File Server profile, the Western Digital RE 4TB remains in the middle of the pack, except at queue depth above 32, where it has the highest max latency. 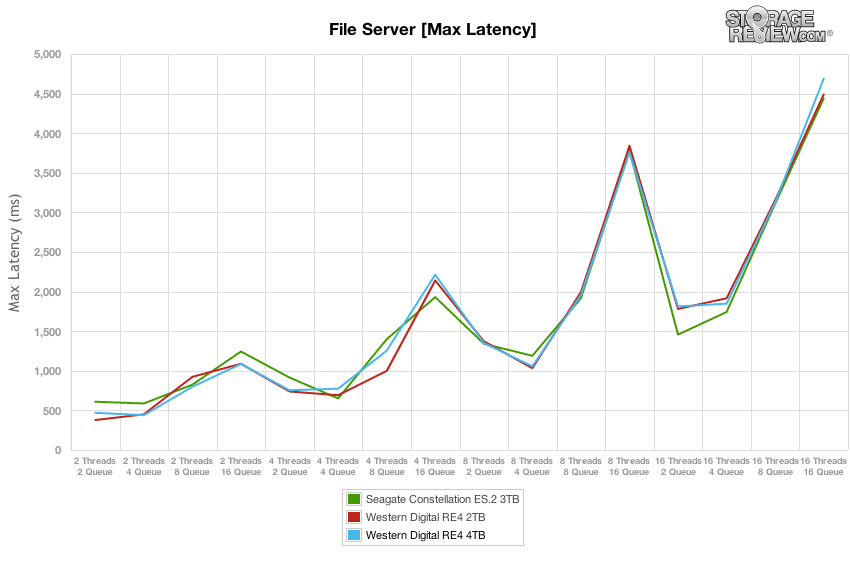 Looking at the latency standard deviation, the Western Digital RE 4TB came in at the bottom of the pack in latency consistency. 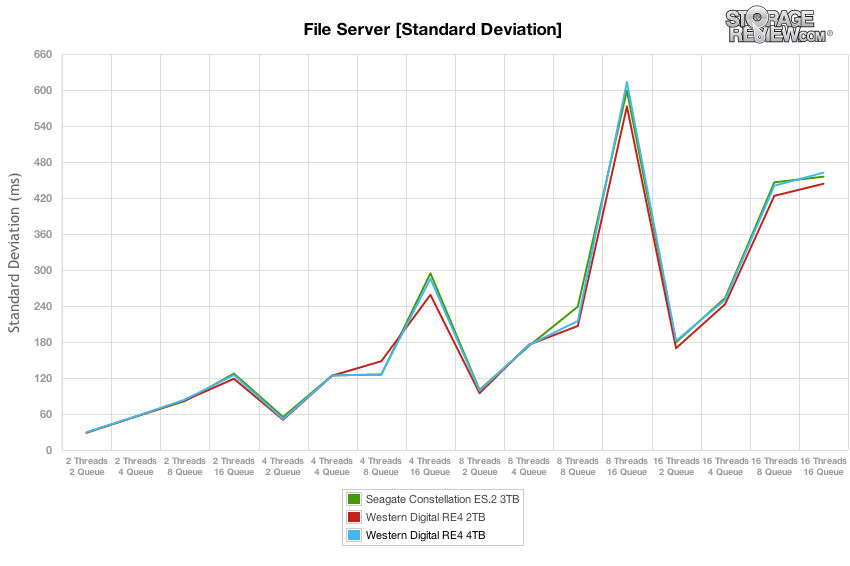 Our final test is the Web Server test, which is traditional 100% read activity. The Western Digital RE 4TB also performs in the middle of the pack, once you hit an effective queue depths of 16 or above. 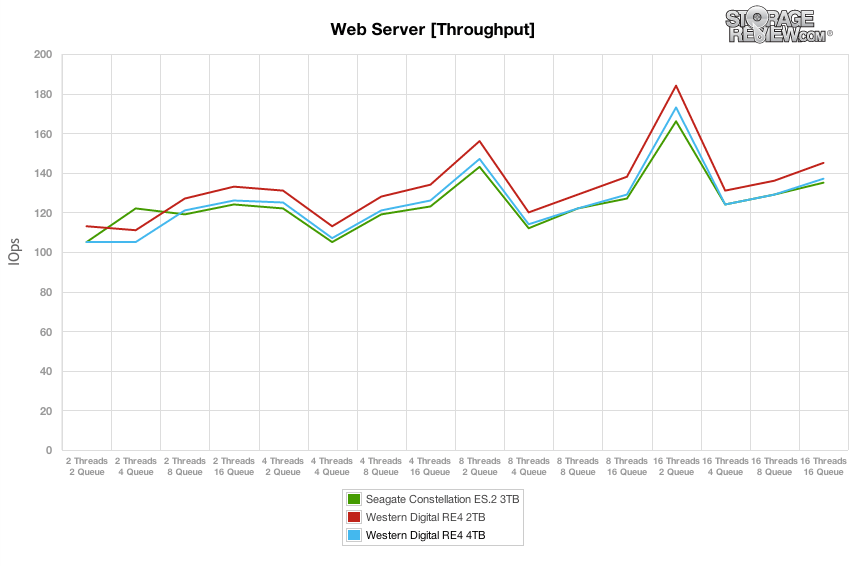 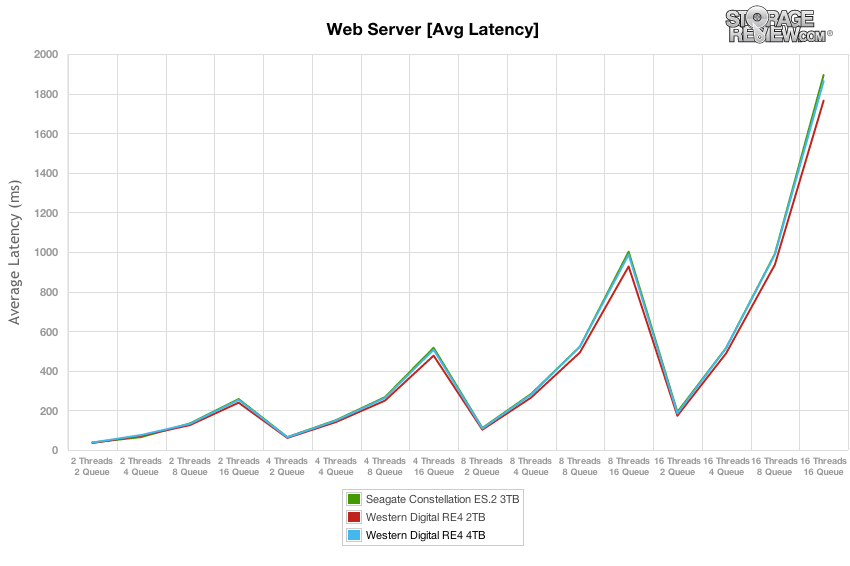 For the duration of the varying loads in our Web Server profile, the Western Digital RE 4TB was outpaced by both drives, by offering the highest max latencies at effective queue depths of 8 or above. 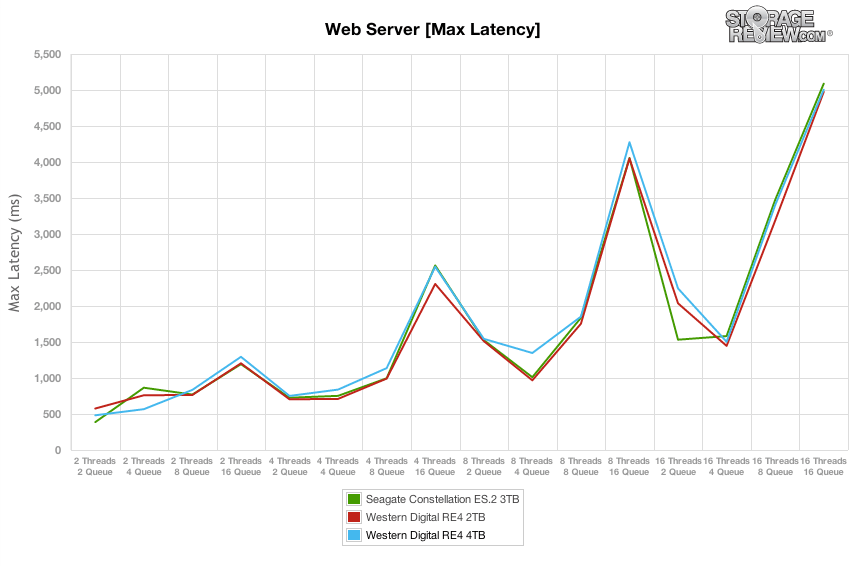 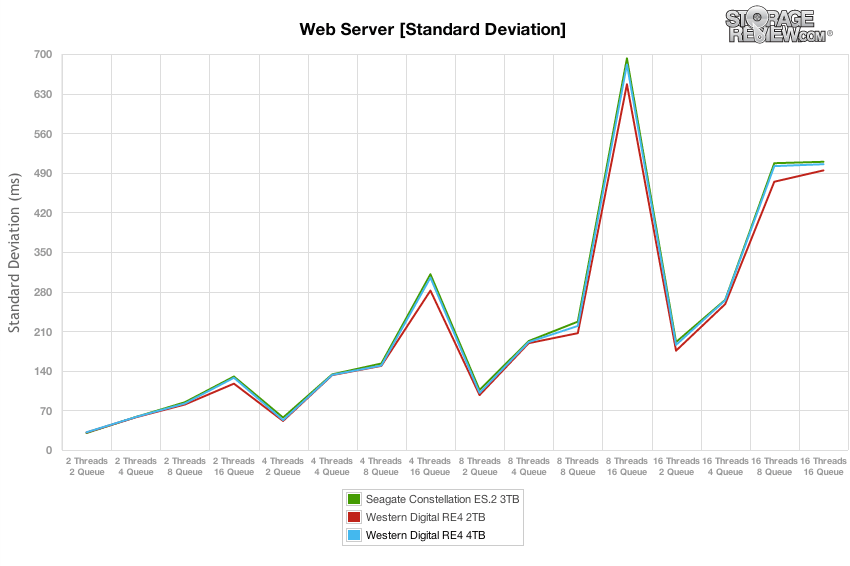 One of the major concerns for IT professional, is the reliability of the product and the likely hood the drive will crash or corrupte their data. Though the track record of the Western Digital RE drives have been good, it is interesting to note that it also has the lowest Mean Time Between Failures (MTBF) in its class at 1.2 million hour MTBF. The newer Seagate Constellation ES.3 offers a 1.4 million hour MTBF and Western Digital’s own HGST Ultrastar 7K4000 brand offers a 2.0 million hour MTBF. This doesn’t mean that the RE will actually fail more often, however it’s worth noting the MTBF quote lags the industry substantially.

The Western Digital RE SATA 4TB provides fast, and reliable performance with the largest available capacity and will give enterprise users a density boost for bulk storage applications.

WD RE 4TB at Amazon.com