The Synology DiskStation DS216se is Synology’s latest affordable 2-bay NAS aimed at small home office and home users. The DS216se is ideal for users looking for a budget-friendly method of setting up a private cloud, a full-featured server, or a media server. The DS216se uses Synology’s award winning DSM as an operating system. Though this is a lower-cost and “se” or single-edition option, its still comes will all of the features that DSM has to offer.

The Synology DiskStation DS216se is Synology’s latest affordable 2-bay NAS aimed at small home office and home users. The DS216se is ideal for users looking for a budget-friendly method of setting up a private cloud, a full-featured server, or a media server. The DS216se uses Synology’s award winning DSM as an operating system. Though this is a lower-cost and “se” or single-edition option, its still comes will all of the features that DSM has to offer. 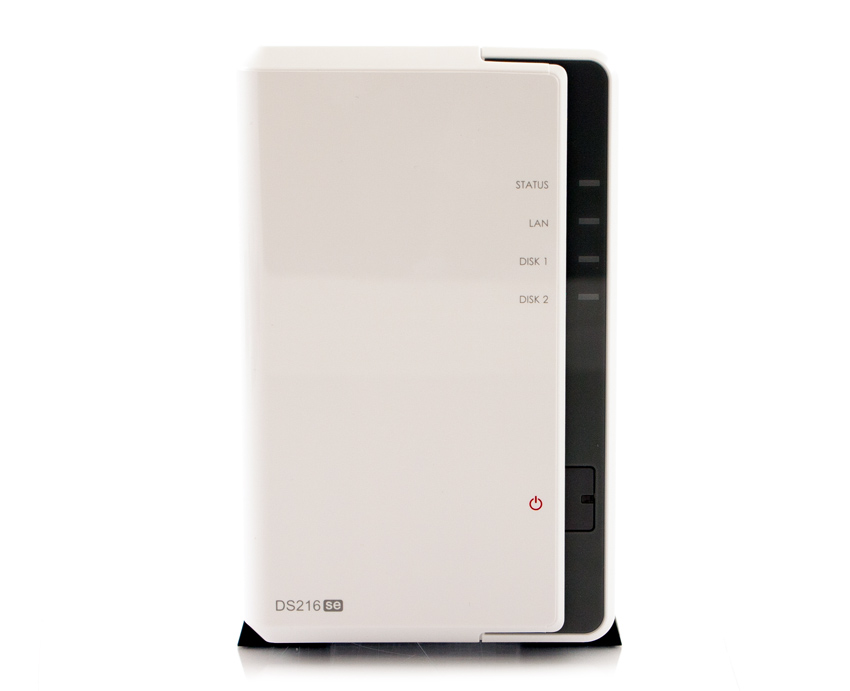 The DS216se comes with the claims of 102MB/s read and 59MB/s write performance (in RADI1 configuration in a Windows environment). The DS216se uses a Marvell Armada 800MHz CPU and 256MB of DDR3 RAM to hit these speeds. The DS216se has a maximum capacity of 16TB (8TB x 2). And the new NAS is extremely power efficient using only 13.73W when in use. Users can schedule power on and off to further save on their electrical footprint.

As with all DiskStation And RackStation devices offered by Synology, the DS216se also runs their award winning operating system DiskStation Manager (DSM). DSM is simple to use and makes setting up a multi-function server fairly easy. DSM comes with a variety of free multimedia applications for users to store they media. They can stream their media to several other devices including mobile devices, gaming consoles, and streaming boxes. The NAS can be used as a backup as it supports both Apple Time Machine and Windows Backup and Restore. DSM offers Cloud Station for syncing files and it also supports syncing the device to other cloud services such as Dropbox, Box, Google Drive, and others.

The Synology DS216se comes with a 2-year warranty and has a street price of $163.

Overall, the outside of the DS216se looks identical to its predecessor, the DS214se, expect for the different model number. It is encased in white plastic and is small enough to place on a desk without adding to the clutter. The front of the device has the model number in the lower left hand side with a power button and four LED indicator lights on the right hand side.

The sides of the device have Synology branding that doubles as ventilation. 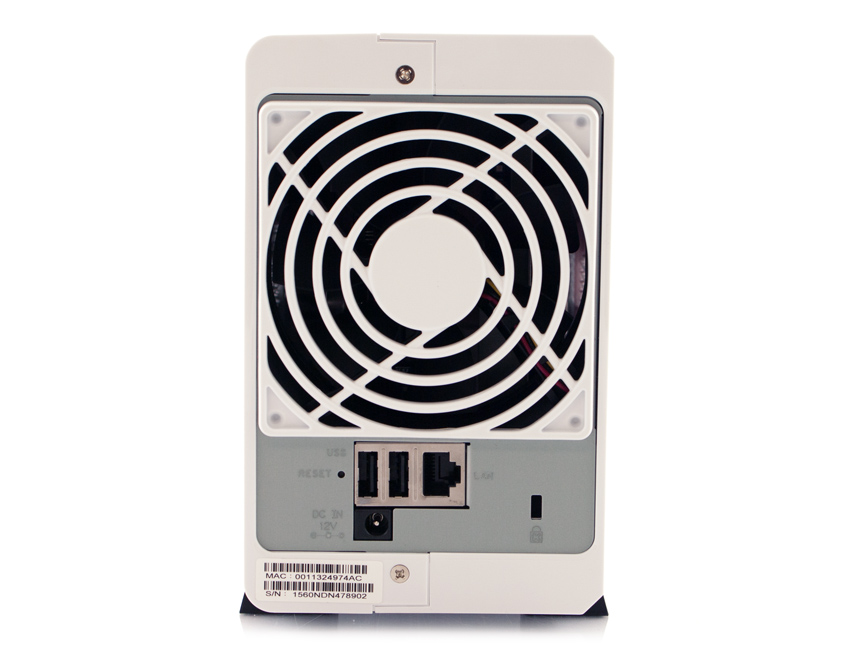 The fan takes up most of the rear of the device. Beneath the fan are the recessed reset button, two USB 2.0 ports, and a LAN port. Beneath these ports is the power supply and over to the right is a Kensington lock. 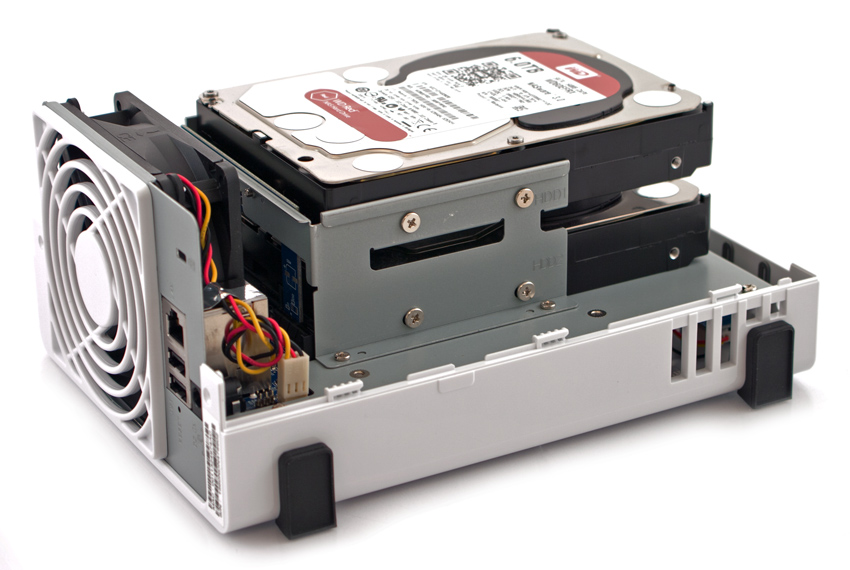 The DS216se doesn’t have drive trays. Instead users need to side the left hand side of the device forward to get to the drives. Once it is open there are 4 screws in each drive holding it in place.

In the first of our enterprise workloads, we measured a long sample of random 4k performance with 100% write and 100% read activity to get our main results. In this test, the DS216se had the highest write performance 304 IOPS. With read performance it came in last by a significant margin with only 55 IOPS.

With average latency the placement of the results were the same with the DS216se having the lowest write latency at 840.41ms but the highest read latency at 4,600.51ms.

Unsurprisingly the max latency was the highest with the DS216se with a read latency of 10,069ms and a write latency of 5,310ms. The max latency of the configurations on the Ds216play was oddly close in both read and write.

Standard deviation saw the DS216se come in last in write latency at 1,019.95ms but it landed in the middle on read latency with 433.79ms.

Compared to the fixed 16 thread, 16 queue max workload we performed in the 100% 4k write test, our mixed workload profiles scale the performance across a wide range of thread/queue combinations. Here the DS216se had the lowest but most consistent performance bouncing between 72 and 74 IOPS. 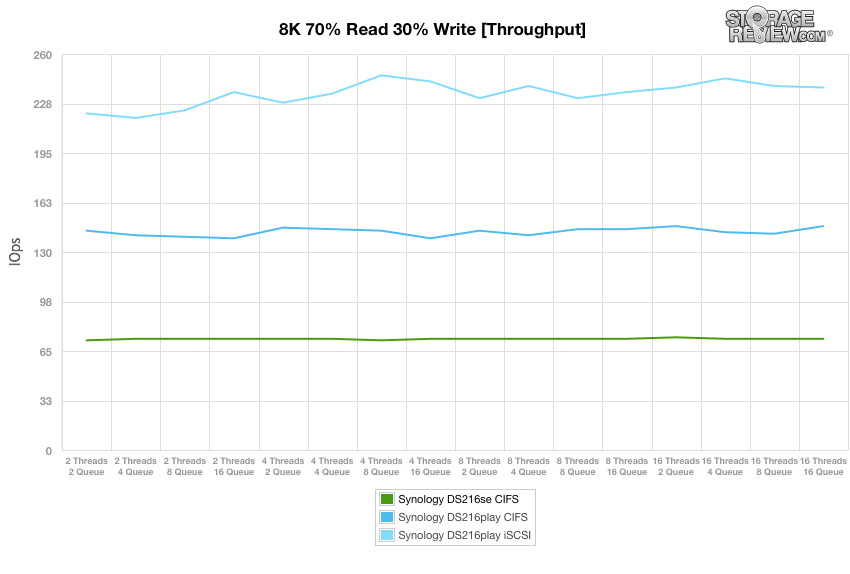 On average latency the DS216se ran at the tail end of the pack with larger spikes especially in terminal depth. 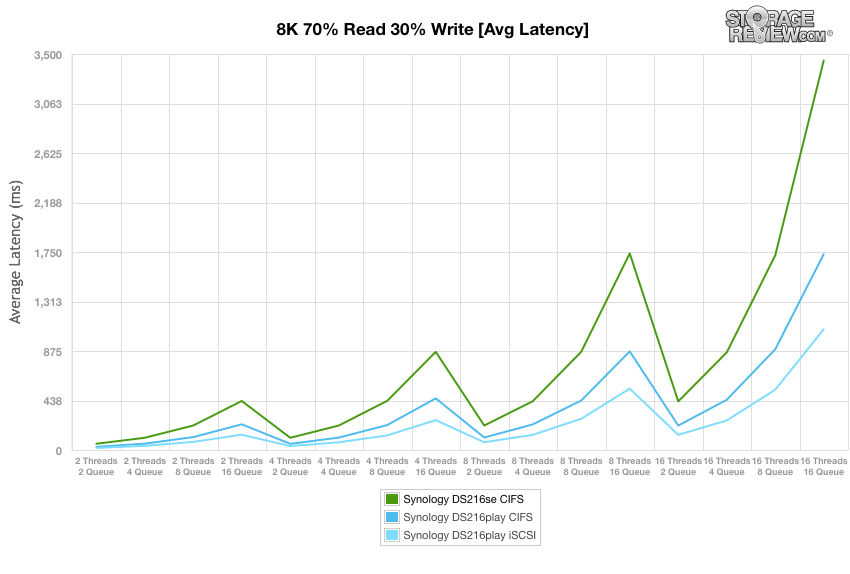 With max latency the DS216se ran more in line with the DS216play CIFS, though the play did run lower overall. The DS216play iSCSI had the lowest and most consistent latency. 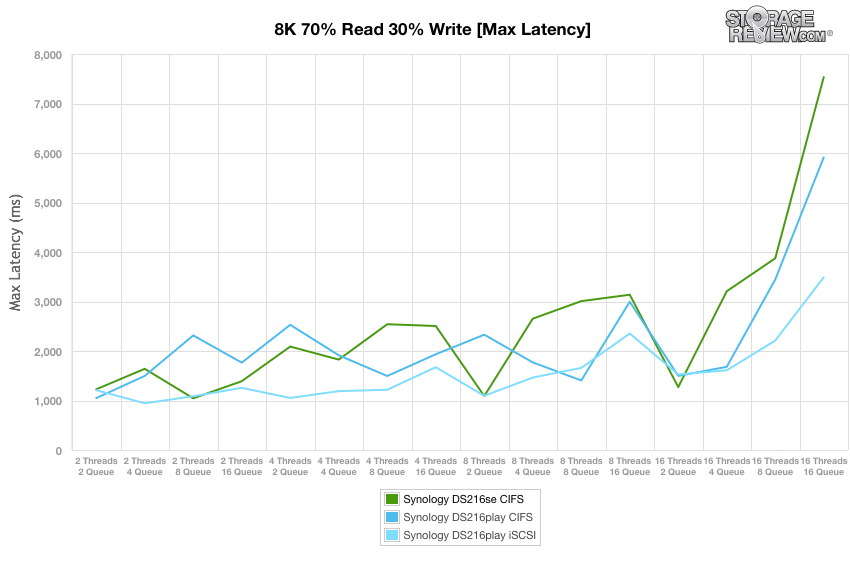 With standard deviation the DS216se ran neck and neck with the other configurations of the DS216play. Starting of with higher latency the NAS finished in the middle of the pack. 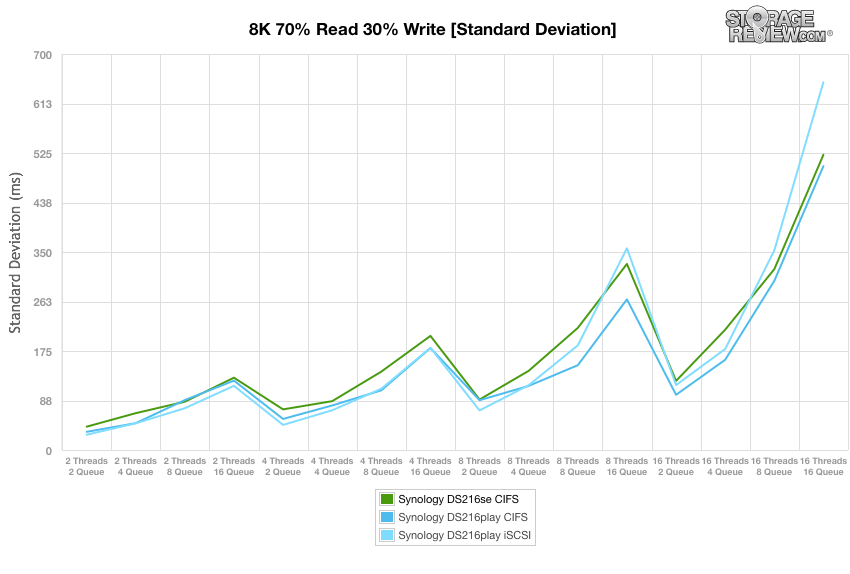 The last test in our Enterprise Synthetic Workload testing is the 128k test, which is a large block sequential test that shows the highest sequential transfer speed for a platter drive. Looking at the 128k performance of 100% write and 100% read activity, the DS216se showed us speeds of 113MB/s read, right behind the top performer (DS216play CIFS at 115MB/s). And the DS216se had the lowest write speed at 62MB/s but still higher than claimed.

The Synology DS216se is a budget-friendly 2-bay NAS aimed at home users, be it small offices or media enthusiasts. The NAS is highly efficient, using a little less than 14W while the drive is being accessed. The NAS comes with a Marvell Armada 800MHz CPU, 256MB of DDR3 RAM, and up to 16TB of capacity. The NAS is powered by DSM and comes with all of the benefits users have come to expect from the OS including cross platform file sharing, mobile access through apps, the ability to store and stream media, and multiple backup options including sync with other cloud sync services.

Looking at performance, the DS216se didn’t blow away the DS216play we compared it to but it held its own, which says a lot considering the DS216play came with a CPU that was twice as fast and had four times the memory. In our 4K tests the DS216se gave us throughput numbers of 304 IOPS write and 55 IOPS read as well as average latency as low as 840.41ms. In our 8K test we saw throughput of 2,715 IOPS read and 1,773 IOPS write. And in our large block sequential test we saw speeds of 113MB/s read and 62MB/s write both higher than the claimed speeds from Synology.

The Synology DiskStation DS216se is an ideal first NAS for a home user or small office. It comes with lots of options in DSM, up to 16TB of capacity, and is very efficient.