The Synology DiskStation DS416 is its newest 4-bay NAS aimed at small to medium businesses or home users that need a high performing, higher capacity storage server or private cloud. The DS416 comes with an Annapurna Labs Alpine AL-212 dual-core 1.4GHz, 32-bit processor and 1GB DDR3 giving claimed average speeds of 220MB/s read and 140MB/s write. Synology further claims that the DS416 can also transfer encrypted files at speeds of 146MB/s read and 65MB/s write. As with all of Synology’s DiskStation and RackStation devices, the DS416 has the award-winning DiskStation Manager (DSM) as its operating system.

The Synology DiskStation DS416 is its newest 4-bay NAS aimed at small to medium businesses or home users that need a high performing, higher capacity storage server or private cloud. The DS416 comes with an Annapurna Labs Alpine AL-212 dual-core 1.4GHz, 32-bit processor and 1GB DDR3 giving claimed average speeds of 220MB/s read and 140MB/s write. Synology further claims that the DS416 can also transfer encrypted files at speeds of 146MB/s read and 65MB/s write. As with all of Synology’s DiskStation and RackStation devices, the DS416 has the award-winning DiskStation Manager (DSM) as its operating system. 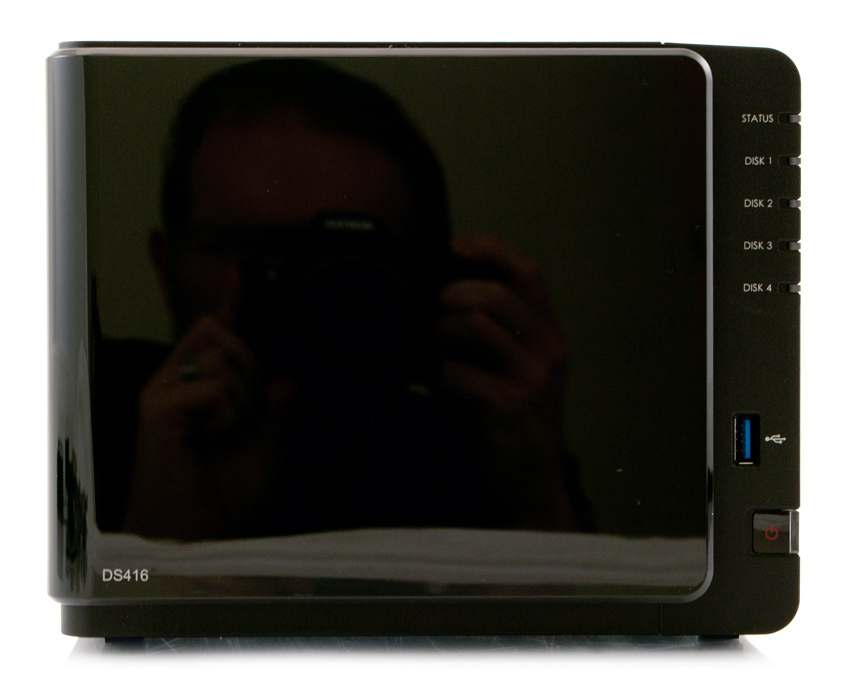 Along with the faster processor and high level of memory, the DS416 also comes with dual LAN ports for greater network performance through link aggregation as well as failover. There are easy to access USB 3.0 ports on the front and back of the device for  fast external storage. The DS416 is designed with passive cooling in mind as well as a redundant fan that automatically kicks on in case of a failure. The NAS supports hot swapping drives and the drive trays are tool less and easy to quickly change out. And with each new release, Synology is making their devices more power efficient.

Aside from the hardware, another appealing aspect of the NAS is DSM. DSM is an intuitive OS that most people can learn to use in a very short time. It allows for cross platform file sharing, remote access through mobile apps, and the setup of a multi-function server. We have reviewed several individual applications in the past including the cloud sync app, Cloud Station, and the powerful surveillance app, Surveillance Station. For the home users with large multimedia libraries (or businesses that use lots of multimedia in their day-to-day operation) there are several easy to use media apps such as Audio Station, Video Station, Photo Station, as well as Plex Media Server.

The DS416 is a desktop from factor NAS and is compact enough to fit on a desktop and sturdy enough to be placed on the floor. The NAS has an all black plastic enclosure. The front of the device has a glossy cover that can be easily removed for access to the drive bays. All the drive bays are tool less and can be slid out by pressing the button at the top and sliding them out. On the bottom left hand side is the device model name. Along the right hand side is the power button and a USB 3.0 port. Above these are 5 LED indicator lights. 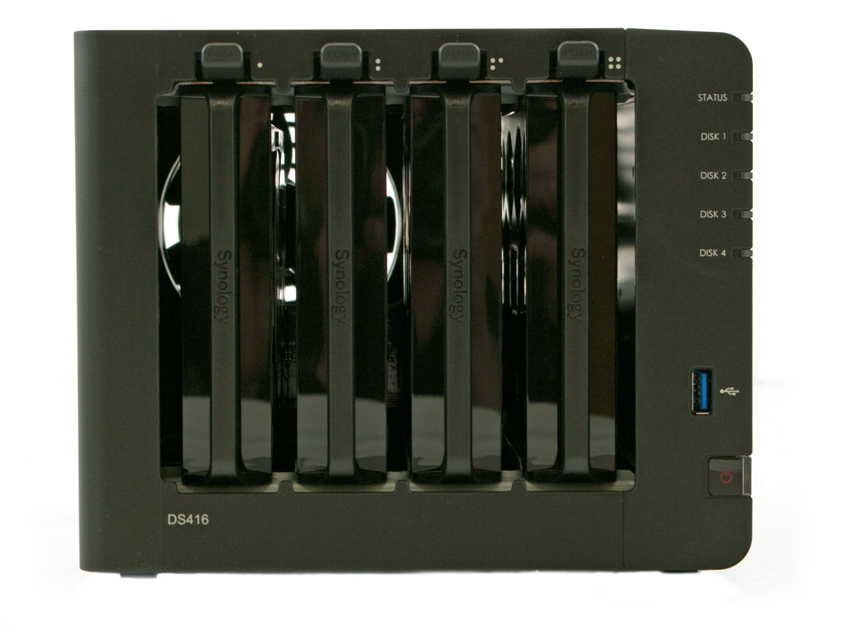 The sides of the device have Synology branding that doubles as ventilation as part of its passive cooling design. 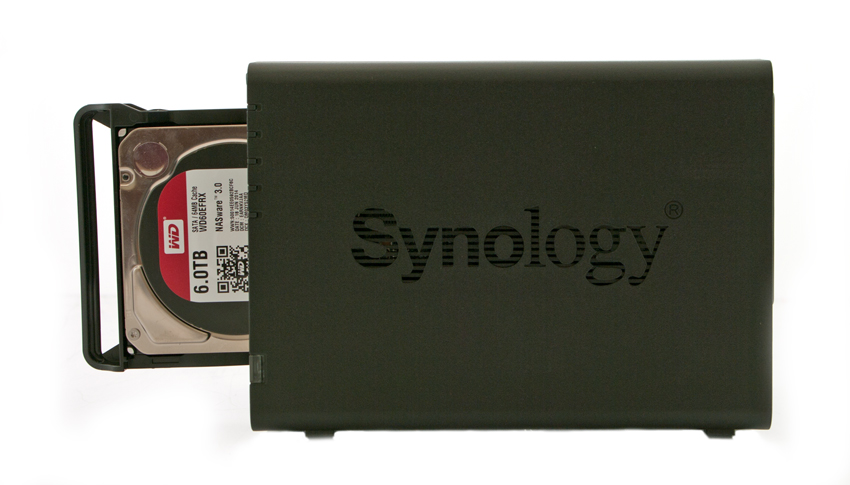 Swinging around to the rear of the device one can see that much of the space is dominated by the to 92mm fans. Beneath the fans are the to LAN ports and power supply on the left hand side with a Kensington lock and two USB 3.0 ports near the middle of the device. To the right is a tag with the device’s information such as model/serial number as well as certifications. 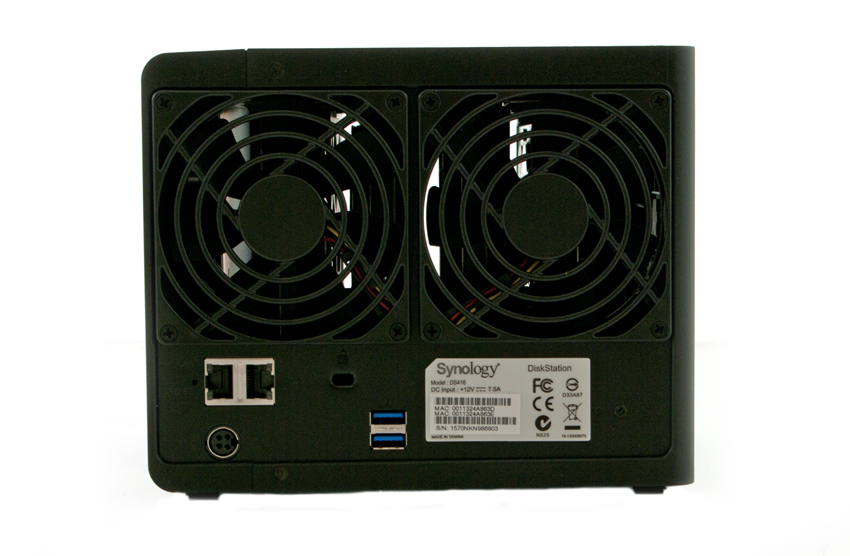 In terms of standard deviation, the read latencies were neck and neck, with the iSCSI being slightly better than the CIFS with 711.19ms to 711.55ms. However with write latency the iSCSI was much lower at 340.27ms to the CIFS 407.15ms.

Compared to the fixed 16 thread, 16 queue max workload we performed in the 100% 4k write test, our mixed workload profiles scale the performance across a wide range of thread/queue combinations. Here the iSCSI started stronger and ran about 100 IOPS or more higher throughout the test, peaking at 288 IOPS.

The average latency gave us similar placement with the iSCSI giving both lower latency and a more consistent performance throughout.

With max latency the iSCSI started and finished stronger than CIFS but both configuration weren’t very consistent. Overall the iSCSI had lower latency.

With standard deviation both configurations ran fairly close for two thirds of the tests before the iSCSI began to pull away finishing with lower latency in the terminal depth.

The last test in our Enterprise Synthetic Workload testing is the 128k test, which is a large block sequential test that shows the highest sequential transfer speed for a platter drive. Looking at the 128k performance of 100% write and 100% read activity, the CIFS configuration was the top performer with 231MB/s read and 220MB/s write. With iSCSI configuration the DS416 gave performances of 142MB/s read and 213MB/s write.

The Synology DS416 is a 4-bay NAS with SMB and home users in mind. The new NAS comes with a dual-core 1.4GHz CPU, 1GB DDR3 RAM, and up to 32TB of capacity. The DS416 has dual LAN ports for failover and link aggregation, a redundant fan to ensure cooling in case of a failure, and 3 USB 3.0 ports for quick external storage. The NAS supports hot swapping the drives and has easy to use tool less bays for fast and simple swapping. The NAS comes with a 2-year warranty and is powered by Synology’s DSM operating system.

The Synology DiskStation DS416 give SMB and home users a high performing NAS with a good deal of capacity with an easy to manage OS.