Synology has made the RS3617xs a fairly scalable NAS as well, making it ideal for growing businesses. In addition to its 96TB of maximum native storage, the RS3617xs can be connected to a dedicated RX1217/RX1217RP2 expansion unit for a maximum of 36 supported drives. This allows the NAS to reach a massive 288TB in possible storage using 8TB drives. All of this data is managed through the intuitive and powerful DSM OS. Using Synology’s Package Center, DSM offers numerous useful add-on packages so businesses can customize the RS3617xs to their unique needs and improve productivity.

The is RS3617xs powered by an Intel Xeon E3-1230v2 quad-core 3.3GHz processor and is equipped with 4GB DDR3 ECC RAM (standard), which can be upgraded up to 32GB. As such, Synology quotes the RS3617xs with performance over 3,263MB/s in sequential throughput and 333,941 IOPS when configured in RAID 5 with 10GbE Link Aggregation enabled.

The RS3617xs is a front-loading 2U unit that supports up to twelve 3.5″ or 2.5″ SATA 6Gb/s HDD/SSDs drives, which take up the majority of real estate on the front of the device. The build of the NAS device is on par with what we see with all rackmount Synologys.

On the left hand side of the front panel is the power button, status indicator, alert indicator (which indicate warnings regarding fans or temperature) and a ‘Beep Off’ button, which activates or deactivates the beeping sound that is emitted during malfunctions.

That being said, we tested Synology RS3617xs in the iSCSI storage networking standard as well as the CIFS standard protocol. For this review we are using 12 x Toshiba HK3R2 960GB configured in RAID10.

Next, we looked at average latency. Here, the four VMs ranged from 450ms to 1,191ms with an average of 701.3ms. Compared to other flash platforms running this same workload, the results were inconsistent for the group, but again other systems we’ve tested have been more expensive.

At 4 VMs, RS3617xs posted an aggregate score of 4,024 TPS. When doubling the amount of VMs to 8, we saw the aggregate score lower to 3,130 TPS, showing the platform at that point was over saturated.

Looking at average latency, during our 4VM configuration, the RS3617xs posted an average latency of 31.84ms while over-saturating it with 8VMs more than doubled that latency to 82.06ms.

During our 4 VMs MySQL test the RS3617xs reached an 99th Percentile average latency of just 86.02ms. Further pushing the post of reaching over-saturation was this figure jumping to 228ms with the workload doubling.

In the first of our enterprise workloads, we measured a long sample of random 4k performance with 100% write and 100% read activity using the CIFS protocol. Read activity was much better when configured in iSCSI, posting 143,575 IOPS compared to 57,540 in CIFS. Writes were much closer when comparing iSCSI and CIFS protocols, as they measured 70,632 IOPS and 57,540 IOPS, respectively.

Results told a similar story when looking at average latency, as read performance was significantly better when configured in iSCSI compared to CIFS, measuring 1.78ms and 22.54ms, respectively. Again, writes were much more even with 3.62ms (iSCSI) and 4.45ms (CIFS).

In the max latency profile, the iSCSI configuration was noticeably better in both reads and writes with 24.3ms and 64.4ms, respectively. In file-level storage (CIFS), the RS3617xs measured 62.4ms read and 127.6ms write.

In terms of standard deviation, iSCSI was the ideal configuration for reads, posting just 1.40ms compared to 15.20ms in CIFS. This time, however, writes were better when configured in CIFS with 3.70ms, which was slightly better than iSCSI block-level storage (4.45ms).

In our next benchmark, we doubled the transfer size to 8K. Like the 4K throughput test before it, there was a noticeable difference in read performance when comparing iSCSI vs. CIFS (i.e. 125,415 IOPS vs 102,104 IOPS, respectively). As you can see below, there was less disparity between write performance.

In our next four charts, we will be showing results based on a protocol consisting of 70% read operations and 30% write operations with an 8K transfer size. As such, the workload is then varied from 2 threads and a queue depth of 2 up to 16 threads and 16 queue. Although it showed major spikes throughout the test, the RS3617xs in iSCSI was the only configuration that showed performance gains. The RackStation showed static performance hovering around the 7,000 IOPS mark. 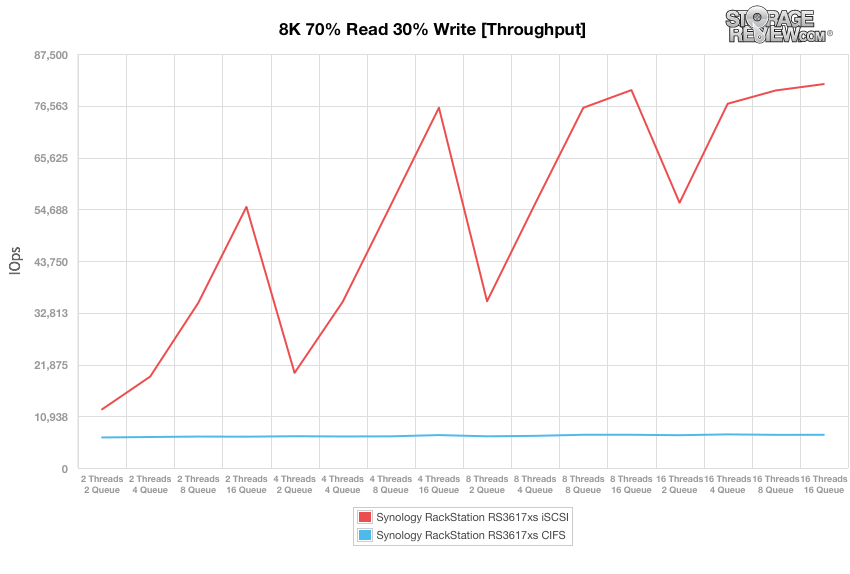 Like in throughput, the iSCSI configuration yielded optimal results by far when looking at average latency, ranging from 0.45ms to just 3.15ms. In CIFS, the RS3617xs measured 2.39ms through 36.47ms. 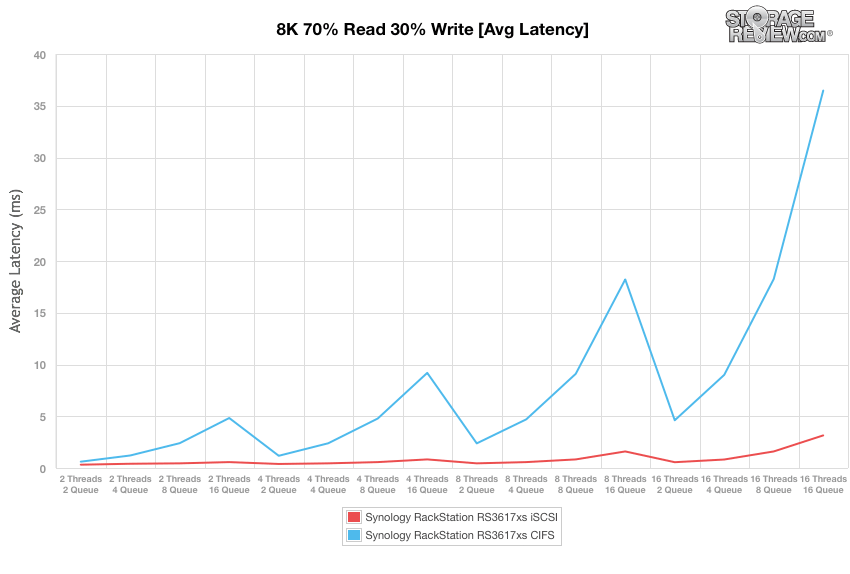 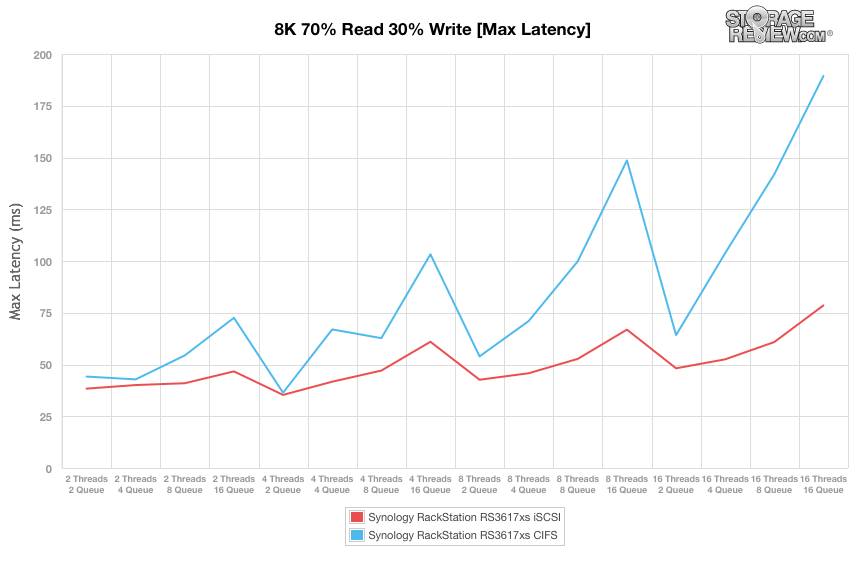 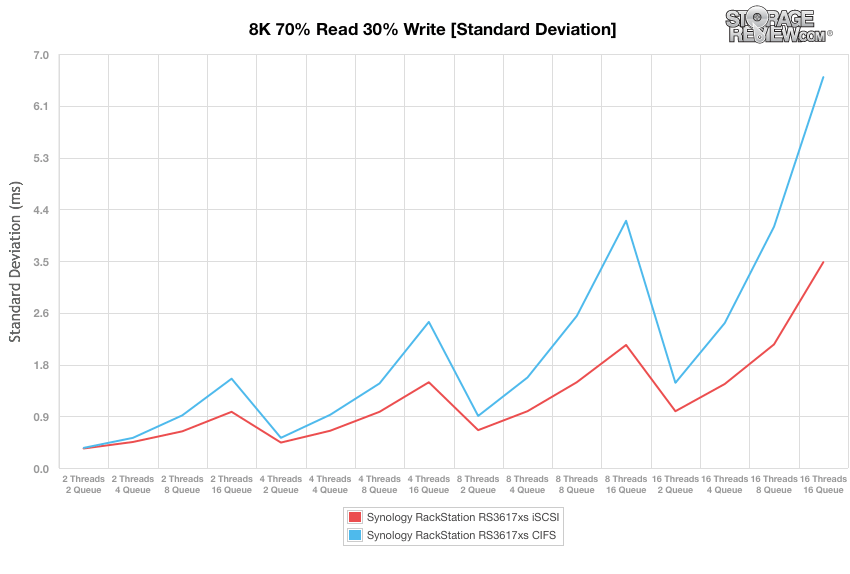 The final synthetic benchmark utilizes much larger 128k transfer sizes with 100% read and 100% write operations. In this scenario, the overall fastest configuration once again was iSCSI, with an impressive 2.31GB/s read and 1.78GB/s write. When configured in CIFS, RS3617xs measured 1.84GB/s read and 1.12GB/s write.

The Synology RackStation RS3617xs is able to deliver the performance needed for small to medium businesses that rely on an extensive range of business applications. Backed by a 5-year warranty, the RS3617xs is powered by an Intel Xeon E3-1230 v2 and up to 32GB of DDR3 ECC RAM and features four 1GbE RJ-45 ports (default option) and dual PCIe 3.0 x8 slots. This impressive RackStation also support upwards of 36 HDDs or SSDs, allowing the NAS to store well over 200TB in maximum raw capacity when using two RX1217/RX1217RP expansion units. Like all RackStations, the RS3617xs runs Synology’s powerful DSM operating system, which allows users to manage the enterprise-grade storage solution via a powerful (yet very intuitive) interface.

In our synthetic benchmarks we saw great results in when configured in iSCSI. During our 4K tests, we saw throughput numbers as high as 143,575 IOPS read and 70,632 IOPS write along with very low latency at 1.78ms read and 3.62ms write when configured in iSCSI. In our 8K throughput test, results were also impressive (in iSCSI) with 125,415 IOPS read and 74,115 IOPS write. Looking at our large block sequential tests showed transfer speeds of 2.31GB/s read and 1.78GB/s write iSCSI and CIFS configuration gave us 1.84GB/s read and 1.12GB/s write.

The Synology RackStation RS3617xs offers plenty of capacity and more than enough performance for most small to medium businesses.