Dell's newest addition to its Precision line leverages workstation-quality componentry with top-of-the-line consumer features. The Precision 5520 UHD, which is boasted as the "world's thinnest, lightest and smallest 15-inch mobile workstation," is mostly geared towards mobile users who want both performance and aesthetics. When fully outfitted, the Precision 5520 features a 4K display (15.6" UltraSharp UHD IGZO), Intel Quad Core Xeon 3.00GHz CPU, 32GB of DDR3 RAM, and up to 2TB of SSD storage, all weighing in at around 3.93lbs. Dell also outfitted the new Precision 5520 with a carbon fiber palm rest and a new (more sensitive) touchpad. With its range of specifications and use cases, the Dell Precision 5520 can stand up to any other premium notebook in its class.

Dell's newest addition to its Precision line leverages workstation-quality componentry with top-of-the-line consumer features. The Precision 5520 UHD, which is boasted as the "world's thinnest, lightest and smallest 15-inch mobile workstation," is mostly geared towards mobile users who want both performance and aesthetics. When fully outfitted, the Precision 5520 features a 4K display (15.6" UltraSharp UHD IGZO), Intel Quad Core Xeon 3.00GHz CPU, 32GB of DDR3 RAM, and up to 2TB of SSD storage, all weighing in at around 3.93lbs. Dell also outfitted the new Precision 5520 with a carbon fiber palm rest and a new (more sensitive) touchpad. With its range of specifications and use cases, the Dell Precision 5520 can stand up to any other premium notebook in its class. 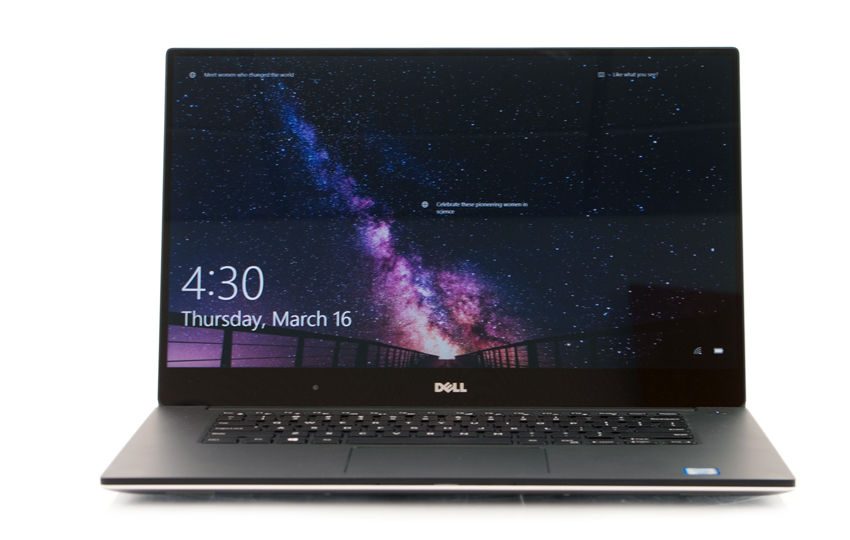 The Precision 5520 has several CPU options (all of which are the latest 7th generation Intel Core CPUs), allowing users to match their notebook's specifications (and cost) to their needs. In addition to its strong processing power, the Precision 5520 has scalable memory options (ranging from 8GB/1 DIMMS to 32GB/2 DIMMS), and a huge number of storage choices (ranging from 500GB to 4TB of HDD storage, or 256GB to 2TB of SSD storage). In terms of its aesthetic features, the Precision 5520 offers users the choice between an UltraSharp FHD IPS (1920×1080) display and Dell's stunning UltraSharp UHD IGZO (3840×2160) display (the latter adding $299 to the total price). As a side note, upgrading to the 4K display requires both a 6-cell battery (add $49) and an M.2 SSD (price ranges from $199 to $867). Thus, upgrading the display will cost around $550 total. For completeness, upgrading the CPU to the Xeon CPU also requires you to upgrade the video card to the Nvidia Quadro (add $70).

The Precision 5520 features a standard Dell notebook chassis, with a sleek silver finish on the top and bottom panels. Dell's emphasis on mobility clearly translates with slim dimensions and a relatively lightweight chassis. 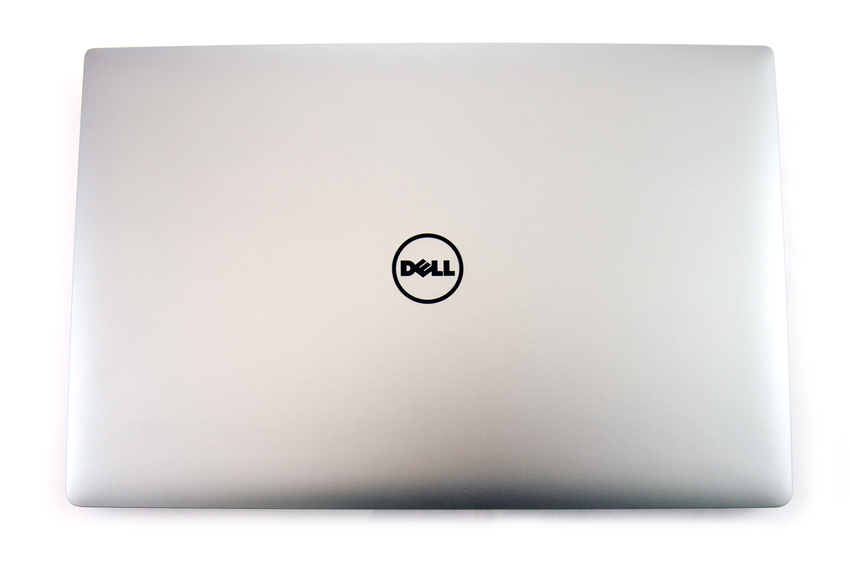 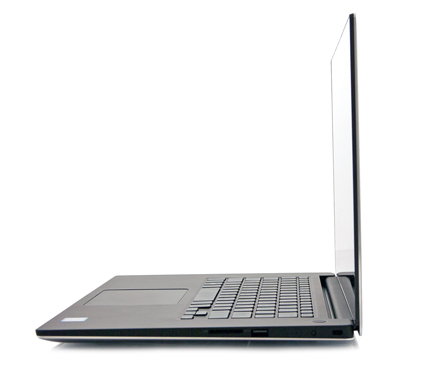 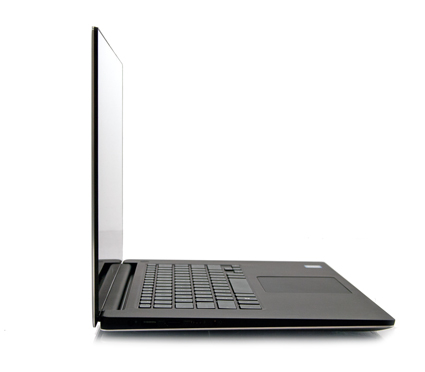 The interior of the Precision 5520 is pretty standard overall, with the main exception being Dell's stunning 4K display (for upgraded units). The newly equipped carbon fiber palm rest and upgraded touchpad give the notebook a more modern look and feel. 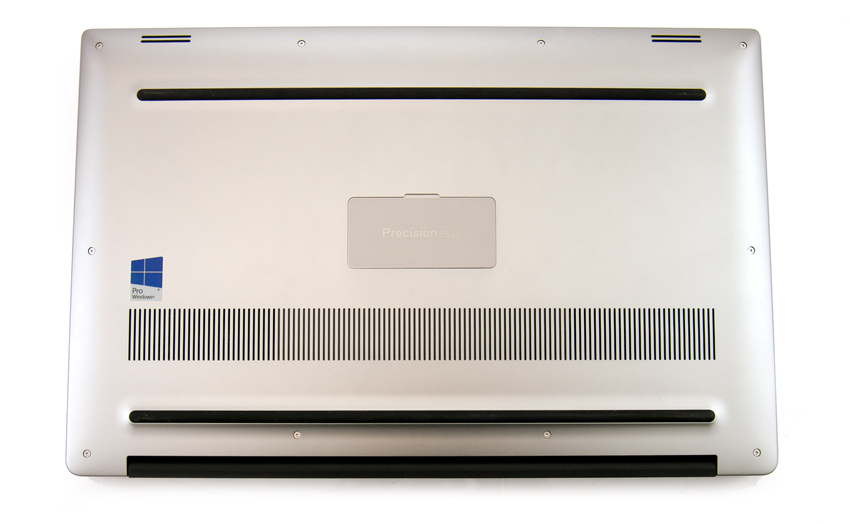 The Dell Precision 5520 comes standard with an Intel Integrated HD Graphics 630 card, but can be upgraded to include the Nvidia Quadro M1200. Since our review unit uses the latter, we will include some specifications and testing to shed some light on its capabilities. The Nvidia Quadro M1200 is a professional graphics card that was designed for use in gaming applications, or for any case in which high resolutions are needed.

We put the Dell Precision 5520 mobile workstation through several benchmarks to showcase its performance during resource-intensive workloads; we also examined the performance of its equipped Nvidia Quadro M1200. To do this, we looked at the SPECviewperf 12 benchmark, which is the worldwide standard for measuring graphics performance based on professional applications. SPECviewperf runs 8 benchmarks it calls “viewsets,” all of which represent graphics content and behavior from actual applications. These viewsets include: CATIA, Creo, Energy, Maya, Medical, Showcase, Siemens NX, and Solidworks.

In addition to SPECviewperf, we also ran SPECwpc, a benchmark that is specifically designed for testing all key aspects of workstation performance. It consists of over 30 workloads that test CPU, graphics, I/O, and memory bandwidth, which also fall under broader categories such as Media and Entertainment, Financial Services, Product Development, Energy, Life Sciences, and General Operations. We are going to list the broad category results for each as opposed to the individual workloads. The results are an average of all the individual workloads in each category.

Next up was the Environmental Systems Research Institute (ESRI) benchmark. ESRI is a supplier of Geographic Information System (GIS) software. ESRI’s Performance Team designed their PerfTool add-in scripts to automatically launch the ArcGIS Pro. This application uses a “ZoomToBookmarks” function to browse various pre-defined bookmarks and create a log file with all the key data points required to predict the user experience. The script automatically loops the bookmarks three times to account for caching (memory and disk cache). In other words, this benchmark simulates heavy graphical use that one might see through ESRI’s ArcGIS software. It's a safe bet that similar graphics-intensive programs, such as Autodesk’s AutoCAD, will fare closely with the results in this benchmark. Although this benchmark looks at several aspects of the ArcGIS program, we are most interested in the average of the drawtime, average frames per second (Average FPS), and minimum frames per second (Minimum FPS).

In our last benchmark, we leveraged PCMark, a tool that calculates the performance at the system and component level and most often represents typical home user workloads for all types of PCs, including tablets, mobile workstations, and desktops. While there are multiple categories that PCMark tests (including typical work usage, home usage, and creative usage), we will only be looking at Storage and Home Conventional benchmarks. The Storage PCMark tests the performance of any drives installed in the system. Specifically, it leverages traces recorded from Adobe Creative Suite, Microsoft Office and a selection of more popular video games to measure real-world performance differences between storage devices.

The Precision 5520 fell behind the other Precision workstations in this setting, posting less than the Precision 3510 and Precision 7510 both in terms of score and bandwidth. It was, however, able to outperform the Latitude e5700 handily in each metric (especially bandwidth).

Overall, the Precision 5520 is a great new addition to Dell's line of workstations, offering great components and performance with the flexibility of a laptop. Although the aesthetic (upgradeable to a 4K display) and portability (3.94lbs, 15.6" screen) of the Precision 5520 are its highlighted features, we also found that it stands up to any of the other recent Precision models that Dell has released in terms of performance. That said, the Precision 5520 also offers a range of components, so that users can tailor it to meet their specific needs (or budget).

Although the standard configuration of the Precision includes an Intel Integrated HD Graphics 630 card and 500GB SATA HDD, our review model was outfitted with an Nvidia Quadro M1200 card and a Samsung SM961 M.2 SSD. We ran additional testing on these components specifically, and found that the Nvidia graphics card performs exceptionally well with the Precision 5520. The Samsung SM961 M.2 SSD slipped slightly compared to the previous generation version in PCMark8, but still offered an exceptionally smooth user experience.

The Precision 5520 provides users with a combination of luxury features (i.e., slim profile, stunning display) paired with specs that stand up very well to other mobile workstations in its class.