The Synology RackStation RS815RP+ (the RP referring to its use of redundant power supplies) is a high-performing NAS built specifically to handle intensive, resource-heavy tasks and encryption. As is the case with most Synology RackStations, the RS815RP+ is built to easily scale for growing businesses by leveraging the company’s RX415 expansion units via eSATA. This allows for the use of 8 total drives for a maximum raw capacity of 80TB, making it ideal for small businesses looking for a rack-based storage solution that can grow with the organization. The RS815+ also features an AES-NI hardware encryption, an engine which distributes the encryption calculation tasks away from the main CPU to help improve overall performance.

The Synology RackStation RS815RP+ (the RP referring to its use of redundant power supplies) is a high-performing NAS built specifically to handle intensive, resource-heavy tasks and encryption. As is the case with most Synology RackStations, the RS815RP+ is built to easily scale for growing businesses by leveraging the company’s RX415 expansion units via eSATA. This allows for the use of 8 total drives for a maximum raw capacity of 80TB, making it ideal for small businesses looking for a rack-based storage solution that can grow with the organization. The RS815+ also features an AES-NI hardware encryption, an engine which distributes the encryption calculation tasks away from the main CPU to help improve overall performance.

As far as its hardware and performance goes, the RS815RP+ acts as a significant upgrade to the RackStation RS815 NAS. Synology quotes encrypted data read and write speeds over 389MB/s and 361MB/s, respectively, compared to the RS815’s average of 216MB/s read and 121MB/s write. To achieve this level of performance, the RS815RP+ comes equipped with a quad-core Intel Atom C2538 CPU that runs at 2.4 GHz as well as a RAM module that can be expanded to 6GB. The RS815RP+ can also seamlessly integrate into a business’s virtualized environment (e.g. it is certified by VMware, Citrix, and Microsoft Hyper-V).

Backed by a 3-year warranty, the RackStation RS815RP+ goes for roughly $1,250 for the diskless model.

The Synology RS815+ leverages a compact 1U form factor with four front-loaded bays (3.5 inch/2.5 inch SATA III). This design choice enables it to satisfy an array of use cases where space might be limited.

The front panel is home to a variety of indicators and functionality, all of which are located just above the four drive bays. Going from left to right, the Power indicator and Power button are located together, which display the power status and powers the device on and off, respectively. Next, it Alert Indicator, which displays warnings regarding fan or temperature issues followed by the four Drive Status indicators Status Indicator, the latter which displays the overall status of the system. Additionally, the Beep off button allows users to enable or disable the beep sound when malfunctions occur with the RS815+.

Turning the device around reveals the back panel, which is houses all of the connectivity. This includes the four LAN and two USB 3.0 ports (the latter is used for external hard drives, USB printers, and other USB devices). The remaining connectivity includes the eSATA port (used for the external SATA drive or Synology Expansion Unit) and console port. The back also features the fan and PSU power ports (the RS815RP+ has two PSUs and two fans).

We will be testing the Synology RackMount RS815+ using the following drives and configurations:

Our first of enterprise workload measures a long sample of random 4k performance with 100% write and 100% read activity. In this scenario, the iSCSI block-level tests showed the best read activity with the Synology RS815+ posting 1,593 IOPS. The write functions had the best showing using our file-level CIFS test, which produced 1,155 IOPS.

The results of the average latency benchmark showed great results from the RS815+ and a noticeable improvement on the non-plus model. In our iSCSI configuration, it posted 160.65ms read and 268.14ms write, while CIFS had 456.56 ms read and a leading 221.62ms write.

Looking at max latency, however, showed the RS815RP+ with results behind its predecessor in read activity (2,348.2ms and 2,592.2ms configured in CIFS and iSCSI, respectively. The RS815+ did have the best write max latency during our block-level tests with just 1,205.5ms.

Our 4k standard deviation results showed much better performance during iSCSI connectivity, as it posted read and write activity of 188.05ms and 166,82ms, respectively, making it the most reliable configuration.

Our next benchmark measures 100% 8k sequential throughput with a 16T/16Q load in 100% read and 100% write operations. Here, the RS815RP+ showed a massive improvement in performance over the RS815, boasting a huge 57,183 IOPS read and 46,803 IOPS write during our CIFS test. As you can see from the chart below, this performance was almost 5x faster than iSCSI and even more faster than the RS815 configurations.

Compared to the fixed 16 thread, 16 queue max workload we performed in the 100% 4k write test, our mixed workload profiles scale the performance across a wide range of thread/queue combinations. In these tests, we span workload intensity from 2 threads and 2 queue up to 16 threads and 16 queue. Here, both the RS815 and RS815RP+ showed great performance when configured in iSCSI. Our CIFS file-level tests showed much weaker results, with the RS815RP+ ending just above the 415 IOPS mark in the terminal. 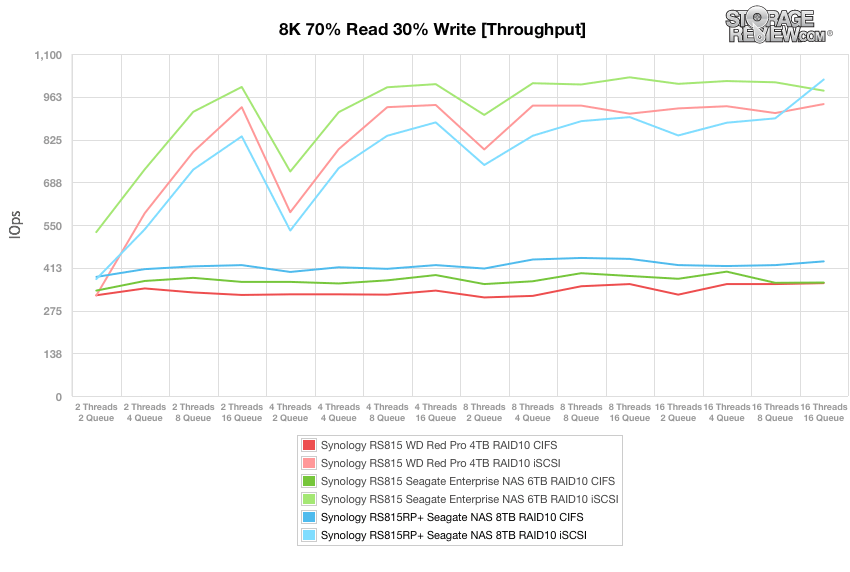 The results of the average latency benchmark showed more of the same, with iSCSI configurations posting virtually identical results throughout the tests with 250.94ms (RS815RP+), 260.46ms (RS815 Seagate NAS), and 272.22ms (RS815 WD Red) in the terminal. 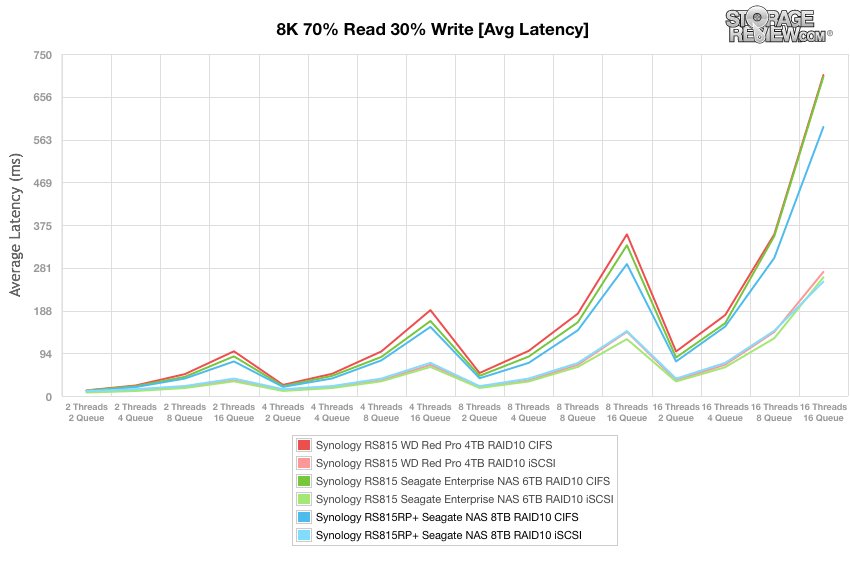 In our max latency benchmark, results were inconsistent across the board. The RS815RP+, however, showed the most stable results, showing its highest latency at 16T/16Q with just 1,346.38ms. In iSCSI, the RS815RP+ showed much higher results with 5,489.3ms in the terminal queue depths. 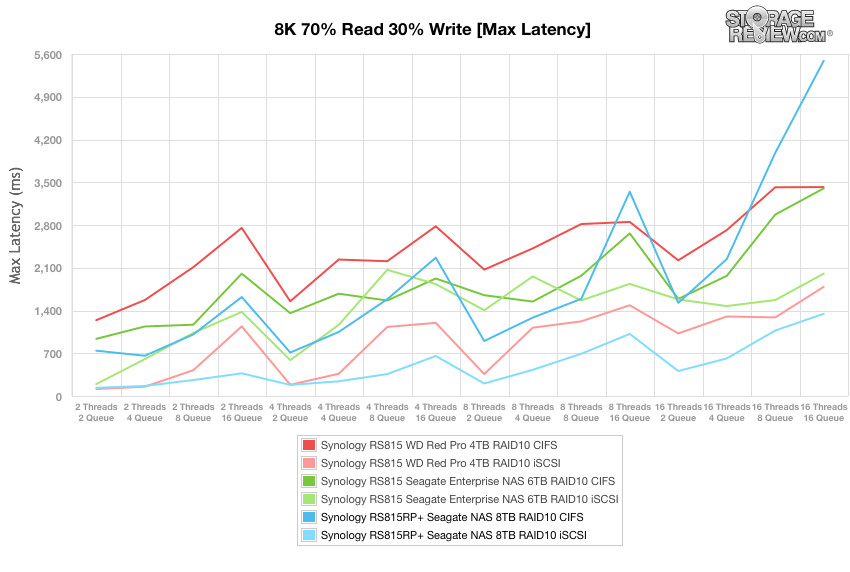 In terms of standard deviation, results were much better during our block-level iSCSI test once again. Here, the RS815RP+ showed 239.66ms in the terminal queue depths, trailing the RS815 populated with the WD Red Pro drives, which recorded 219.61ms. 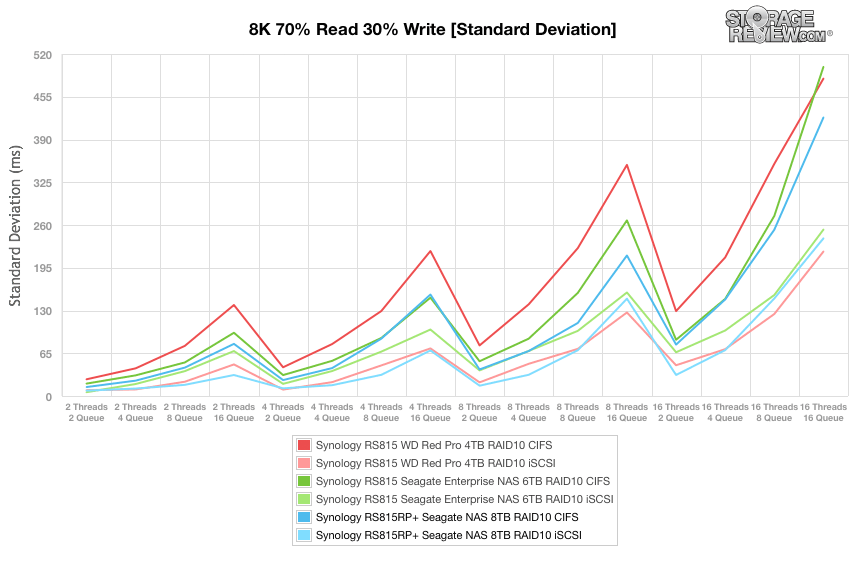 Our last benchmark in our small NAS Synthetic Workload testing is the 128k test, which is a large block sequential test that shows the highest sequential transfer speed. Both configurations of the RS815RP+ showed significant improvements on the non-plus model, recording an impressive 462.7MB/s read and 441.9MB/s write, and 298.0MB/s read and 349.0MB/s write for CIFS and iSCSI, respectively.

The Synology RS815RP+ RackStation offers growing businesses an expandable NAS designed to handle SOHO/ROBO workloads with encryption. Equipped with redundant power supplies, the RS815RP+ leverages the RX415 expansion units via eSATA for an additional four drives and a massive maximum raw capacity of up to 80TB with 10TB HDDs. The Synology RackStation also comes with an AES-NI hardware encryption engine, which offloads some of the encryption calculation tasks from the main CPU.

Looking at performance, the RS815RP+ showed good overall results, though it did fall behind the non-plus model in a few of our workloads. During the long sample of random 4k performance with 100% write and 100% read activity, our iSCSI block-level tests showed the best read activity for the Synology RS815RP+, posting 1,593 IOPS. In our CIFS write test, we measured 1,155 IOPS. The results of the average latency during the benchmark showed impressive results and a significant improvement over the RS815 model. In our iSCSI configuration, the RS815RP+ posted 160.65ms read and 268.14ms write, while CIFS had 456.56 ms read and a leading 221.62ms write.

When measuring 8k sequential throughput, the RS815RP+ showed a massive leap in performance compared to the RS815, with a huge read and write speeds of 57,183 IOPS and 46,803 IOPS, respectively, during our CIFS test (almost 5x faster than iSCSI). In our a large block sequential 128k test, which shows the highest sequential transfer speed possible, both configurations of the RS815RP+ showed significant improvements once again over its RS815 more economical brethren, boasting an impressive 462.7MB/s read and 441.9MB/s write, and 298.0MB/s read and 349.0MB/s write for iSCSI and CIFS, respectively.

The RS815RP+ is equipped with other useful features that add to the value of this NAS. This is highlighted by the DiskStation Manager OS, which adds a ton of versatility to the RS815RP+, including the ability to create your own private cloud with the Cloud Station app. Your files can be edited in offline mode and later synced to Cloud Station across multiple devices. It also allows you to keep up to 32 historical versions, giving you the ability to restore previous versions or recover deleted files. Not only does it offer PSU redundancy, businesses that require continual network service, businesses are given a peace of mind dual with its dual gigabit LAN ports (failover mode or link aggregation).

The Synology RS815RP+ RackStation is a full-featured rackmount NAS that would make a great addition to any growing business looking for a expandable storage solution.