Thunderbolt Storage With Any 2.5″ Hard Drive or SSD 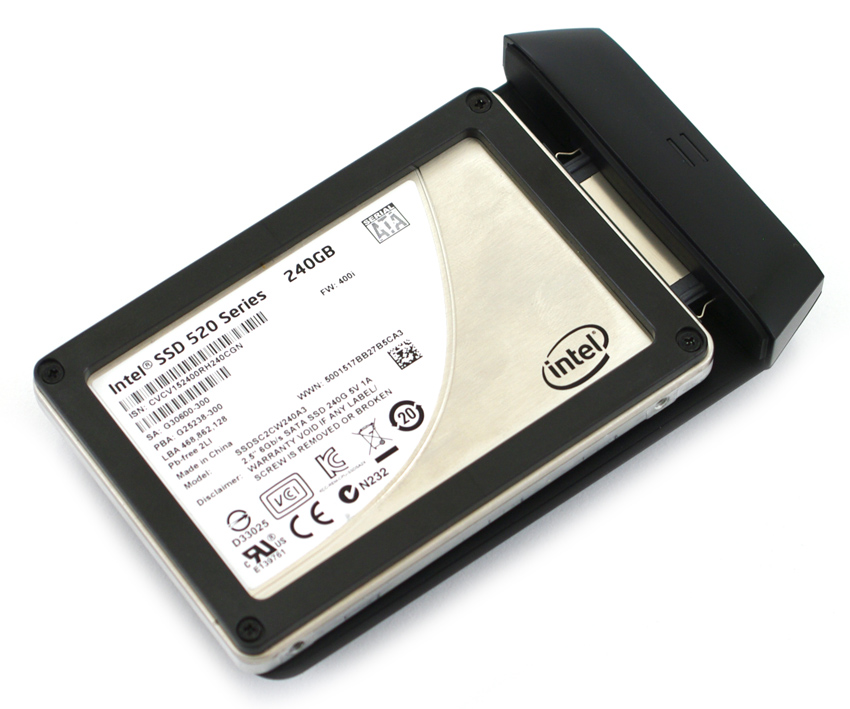 The way the Thunderbolt adapter connects in a universal fashion to any 2.5-inch hard drive or SSD is nothing new. Seagate’s GoFlex connection puts all the interface electronics into the adapter itself and passes pin-to-pin power and data from the drive through the enclosure. This gives it an ultimate level of compatibility no matter what the next interface protocol is; see the USB 2.0, USB 3.0, FireWire, eSATA, and now Thunderbolt adapters. It just so happens that Seagate uses normal SATA power/data port to make this happen, allowing users with a DIY interest to use these adapters for other means.

Before we go any further, we need to stress that the Thunderbolt adapter was never designed to connect to a bare drive. It is designed to mount to the connection on the back of the GoFlex product line with a snug and secure grip. A bare drive can connect and interface, but will easily disconnect if moved around. For a long-term solution you would really need to cannibalize a GoFlex external hard drive and swap in your SSD of choice.

Instead of looking at normal synthetic benchmarks of peak sequential read or write speed, we felt the best measurement of the performance of each interface would be using our real-world traces. The testing conditions for this review include a mid-2011 Apple MacBook Air for the Thunderbolt connection testing through Windows 7 Ultimate 64-bit, and our consumer testing platform for native SATA, USB 2.0, and USB 3.0. 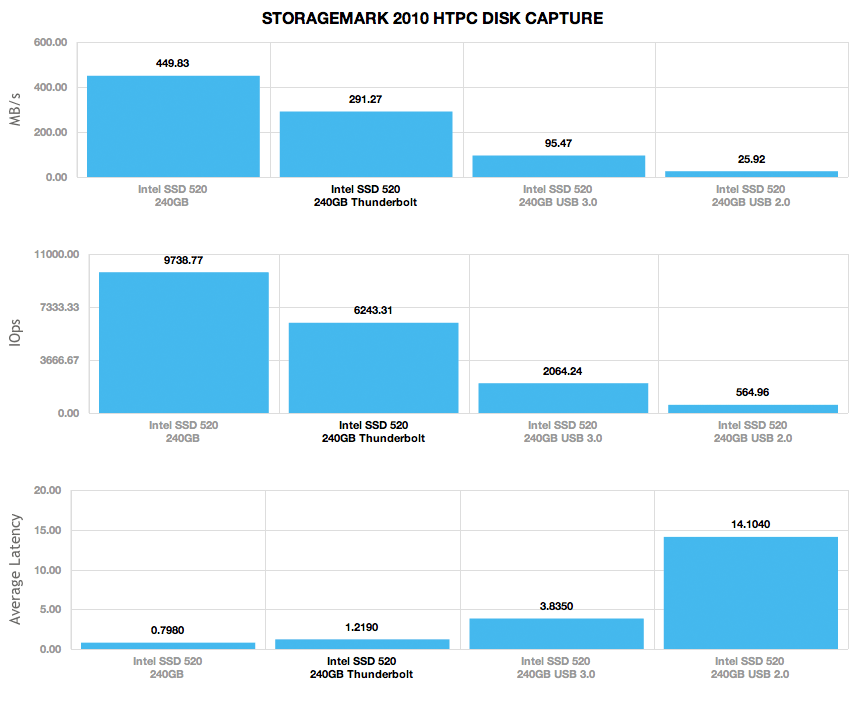 It was a bit of a surprise to see just how much faster Thunderbolt is over USB 3.0 for a single SSD while still coming in slower than SATA. In our HTPC trace the speed difference was 95MB/s for USB 3.0 or 291MB/s for Thunderbolt. Both still came in lower than native SATA which measured 449MB/s. The improvement between USB 3.0 and moving to Thunderbolt measured 205%. 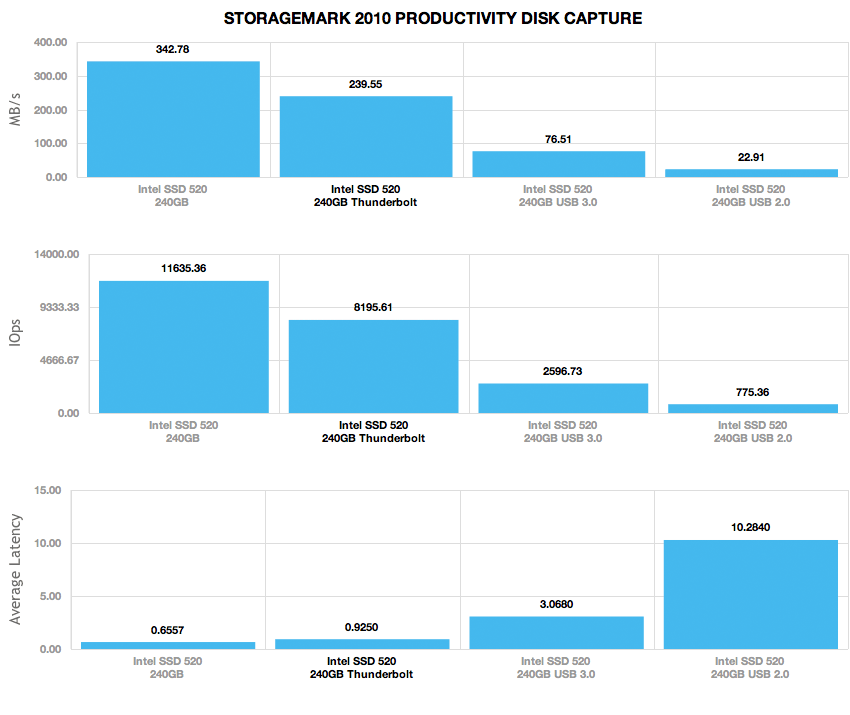 In our Productivity setting we measured the speed of the USB 3.0 connection at 76MB/s while Thunderbolt flew past at 239MB/s…although still under 342MB/s from SATA. The difference between USB 3.0 and Thunderbolt measured 213%. 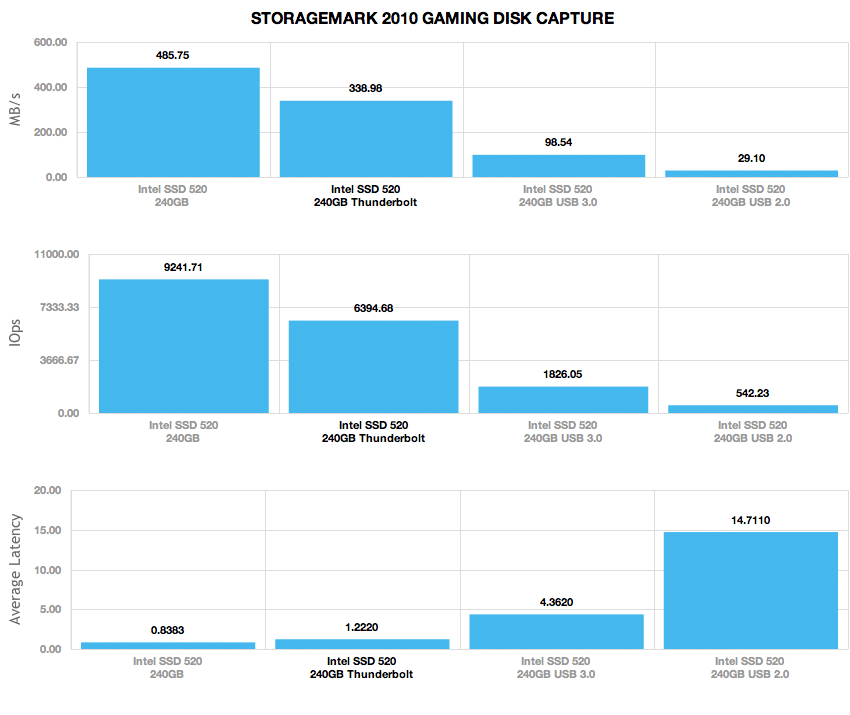 In a read-heavy gaming scenario, the USB 3.0 connection measured 98MB/s compared to 339MB/s from Thunderbolt or 485MB/s from SATA. The improvement going between USB 3.0 and Thunderbolt was 244%.

Another key point to make is that while we all accept that Thunderbolt is expensive, partly due to being a new technology and partly due to Apple’s exclusive $50 cable, with Seagate’s $99 Thunderbolt sled, there’s less reason to pay a premium for single drive external storage solutions. Many companies have announced portable Thunderbolt SSD solutions, but they’re expensive. Sure the LaCie and Elgato solutions are pretty, but you’re paying $700 or more for design and a question mark as to what SSD is inside. With this DIY solution at least you can buy the SSD you want, which is likely going to be a better performer than what gets bundled in. And, you still get the flexibility to swap drives at will, something the pre-packaged enclosures don’t offer.

We’re not here to say this particular implementation of Thunderbolt is right for the masses, as the end results aren’t pretty. When paired with the right drive, the Seagate Thunderbolt adapter does quite well, albeit not at native SATA speeds. For Mac users who need high-speed external drive access Thunderbolt delivers when used in the right situations. For port constrained MacBook Air users Thunderbolt is great, and for the rest of the Mac family when paired with an SSD as we’ve seen, the results are pretty good. As to whether or not Thunderbolt is for you that’s another question, but know that there are other options than the over-priced external SSD bundles that exist today.

Our testing with a high-performance SSD and the Seagate Thunderbolt adapter shows substantially better results than current USB/FireWire external SSD options, while providing a better SSD and lower overall price by a wide margin. The solution may not be pretty but it’s very effective and works with any consumer 2.5″ drive, giving the masses an alternative to more expensive and less flexible portable Thunderbolt solutions available today.