Back at CES this year, Toshiba announced its new BG4 lineup. BG4 stands for the fourth generation of the company’s ball grid array (BGA) SSD product line. These new SSDs come in the tiny M.2 2230 form factor making them ideal for ultra-mobile PCs, 2-in-1 notebook PCs, IoT/embedded devices, and server and storage array boot drives. Though the drives are small in size they do come in capacities ranging from 128GB to 1TB.

Back at CES this year, Toshiba announced its new BG4 lineup. BG4 stands for the fourth generation of the company’s ball grid array (BGA) SSD product line. These new SSDs come in the tiny M.2 2230 form factor making them ideal for ultra-mobile PCs, 2-in-1 notebook PCs, IoT/embedded devices, and server and storage array boot drives. Though the drives are small in size they do come in capacities ranging from 128GB to 1TB. 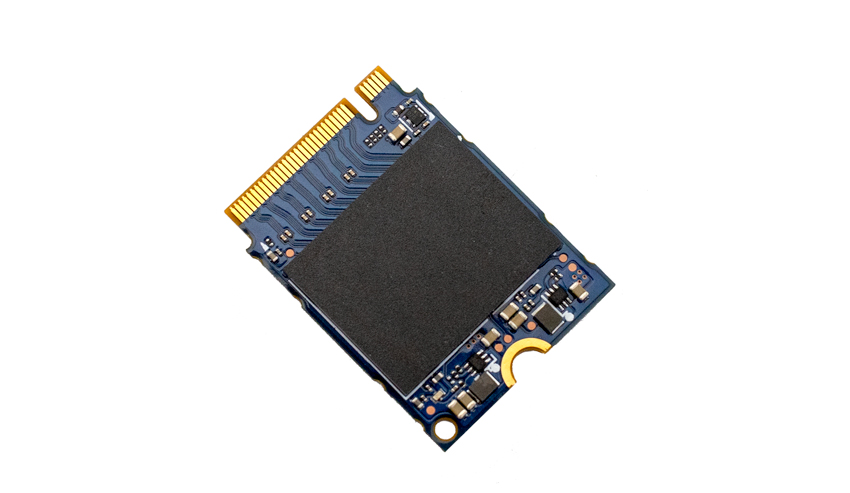 The BG4 drive leverages Toshiba’s 96-Layer BiCS FLASH to hit quoted speeds of up to 2.3GB/s read and 1.8GB/s write as well as throughput as high as 390K IOPS read and 200K IOPS write. Not too shabby for something slightly larger than an SD card. The BG4 is able to hit these numbers while only using 3.7W of power. For added security, Toshiba will also offer the BG4 in an SED model that supports TCG Opal Version 2.01.

The Toshiba BG4 is a very small SSD with a single NAND pack on one side and blank on the other. 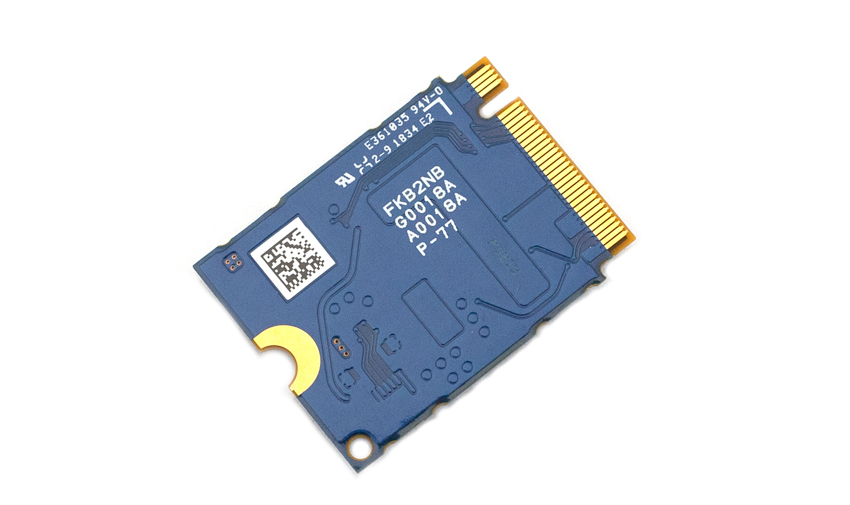 The drive itself is smaller than a standard SD.

The Toshiba BG4 did fairly well in our Houdini test scoring near the top on the non-Optane drives with a score of 2,624 seconds. 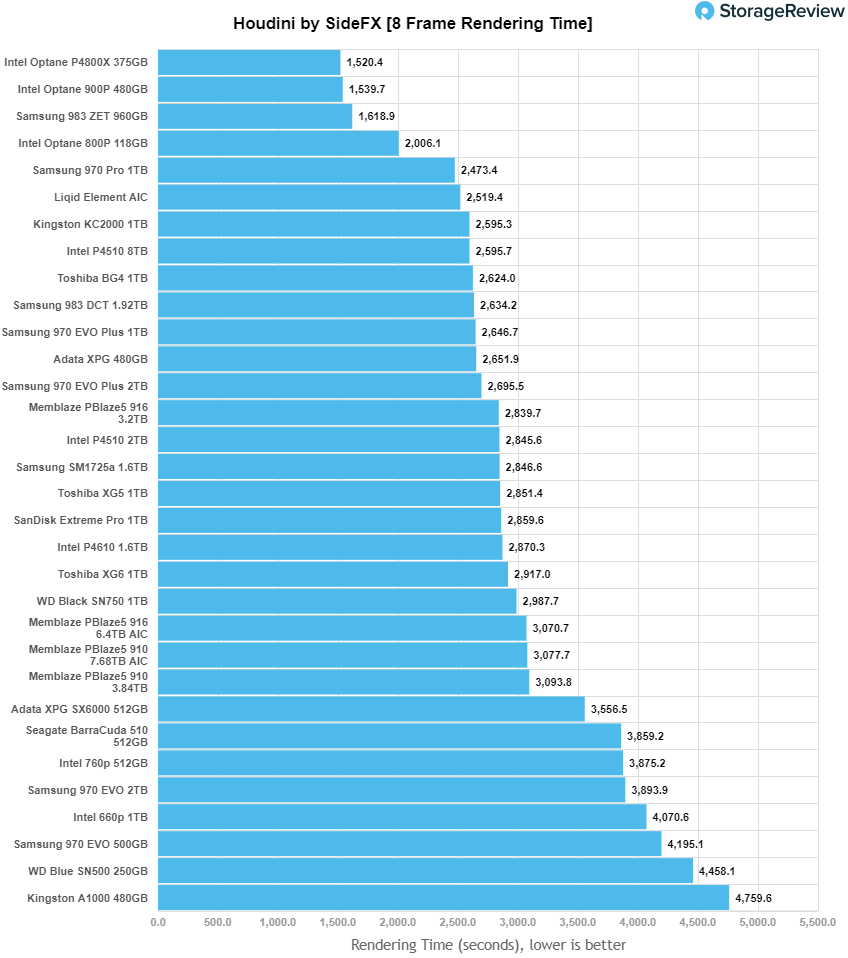 When looking at SQL Server Output, the Toshiba BG4 came in second to last in our pack with 2,568.4 TPS. 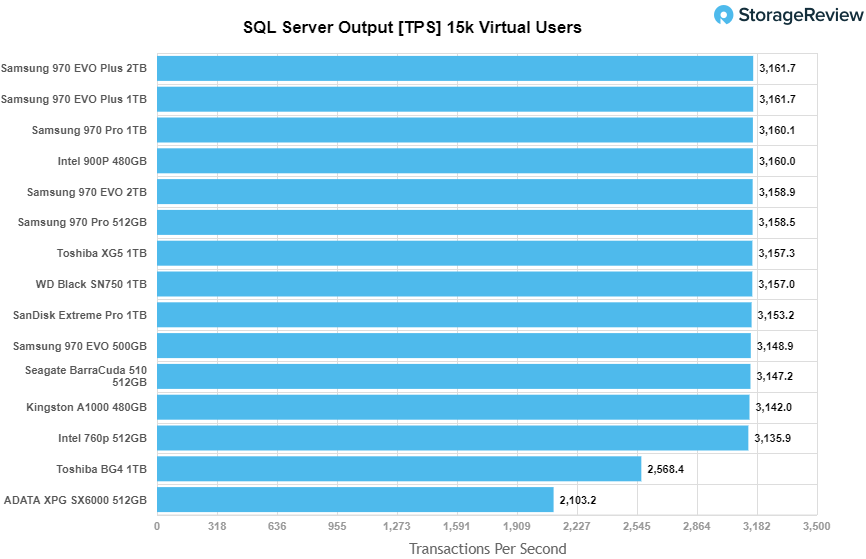 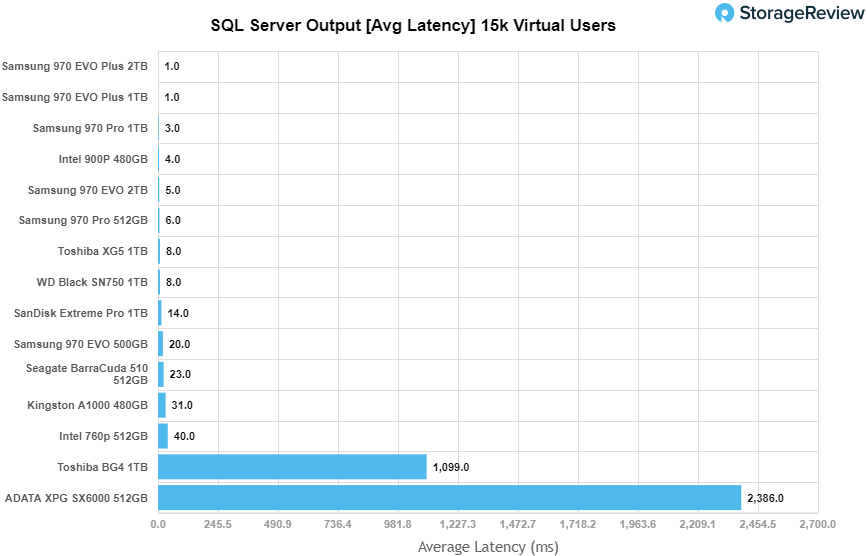 The peak 4K read performance of the Toshiba BG4 saw sub-millisecond latency throughout however the drive placed last over all with a peak performance of roughly 158K IOPS at a latency of about 820μs before falling off some.

For 4K write performance, the BG4 once again came in last this time by a much larger margin. The drive peaked at 16,463 IOPS with a latency of 7.77ms. For a point of comparison, the top performer was well over 350K IOPS with sub-millisecond latency performance.

Switching over to sequential workloads, we see an increase in performance in our 64K read benchmark seeing the BG4 place roughly in the middle with a peak performance of 16,376 IOPS or 1.02GB/s at a latency of 977μs.

Next, we looked at our VDI benchmarks, which are designed to tax the drives even further. These tests include Boot, Initial Login, and Monday Login. Looking at the Boot test, the BG4 started and remained at the bottom of the pack with a peak performance of 39,869 IOPS and a latency of 851μs.

For VDI Initial Login, the BG4 stayed in the back with a peak performance of roughly 4,200 IOPS at a latency of 6.9ms.

VDI Monday Login also saw the drive in the rear with a peak performance of 4,621 IOPS and a latency of 3.45ms.

The Toshiba BG4 is the fourth generation of Toshiba’s ball grid array SSD line. BGA products come in tiny form factors (M.2 1620 or M.2 2230 in this case) as to fit in ultra-mobile PCs, 2-in-1 notebook PCs, IoT/embedded devices, and they can also be used as a storage array boot drive. An interesting facet of the BG4 is that while it is still small like other embedded devices, it does come in capacities up to 1TB. The drive is also offered in an SED model supporting TCG Opal Version 2.01.

For performance there needs to be some perspective. While the BG4 has the capacity of several of the consumer SSDs we tested it against, it is much more specific in its use cases. With the exception of Houdini (where the BG4 scored near the top with 2,624 seconds), the BG4 performed poorly by comparison. However, it has high performance for an embedded device. The BG4 had SQL Server performance of 2,568.4 TPS with an average latency of 1,099ms. For VDBench, the BG4 saw scores such as 158K IOPS 4K random read, 16K IOPS 4K random write, and sequential scores of 1.02GB/s read in 64K and 97MB/s write in 64K. Our VDI benchmarks saw 40K IOPS boot, 4,200 IOPS Initial Login, and 4,621 IOPS for Monday Login.

For an embedded device with such a small form factor, it is nice to see such high capacities from Toshiba. While the performance was behind the other SSDs we compared it to, it was fairly strong for an embedded device and the prospective use cases it will find itself in. And of course, the Toshiba brand cachet should also help ease concerns around build quality and support which is often suspect in this segment of the market.