Toshiba is looking to enter the mainstream end-user NVMe stage with the OCZ RC100 Series SSD. Launching at a competitive price point, the RC100 is designed for those looking to upgrade their rigs to the much faster NVMe technology, fitting in the middle of their SATA (such as the OCZ TR200) and higher-end NVMe SSDs (such as the RD400). Eventually NVMe will supplant SATA in PCs, offering solutions for value and an alternate line for performance. Toshiba is getting out ahead of the curve with the RC100 as it tries to address that space.

Toshiba is looking to enter the mainstream end-user NVMe stage with the OCZ RC100 Series SSD. Launching at a competitive price point, the RC100 is designed for those looking to upgrade their rigs to the much faster NVMe technology, fitting in the middle of their SATA (such as the OCZ TR200) and higher-end NVMe SSDs (such as the RD400). Eventually NVMe will supplant SATA in PCs, offering solutions for value and an alternate line for performance. Toshiba is getting out ahead of the curve with the RC100 as it tries to address that space. 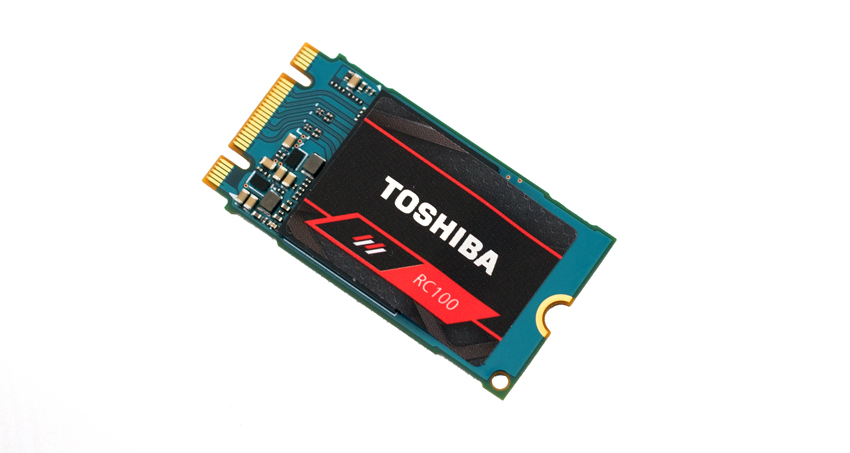 The RC100 features and the Toshiba’s 64-layer BiCS FLASH, the latter which combines performance, cost, and endurance for all types of SSDs. To drive down the price further, the new Toshiba drive uses a cost-effective single-package, DRAM-less design to enable a performance-driven experience at a fraction of the power usage compared to other NVMe drives. The RC100 also uses the more compact (shorter) M.2 2242 form factor versus longer 2280 form factor. 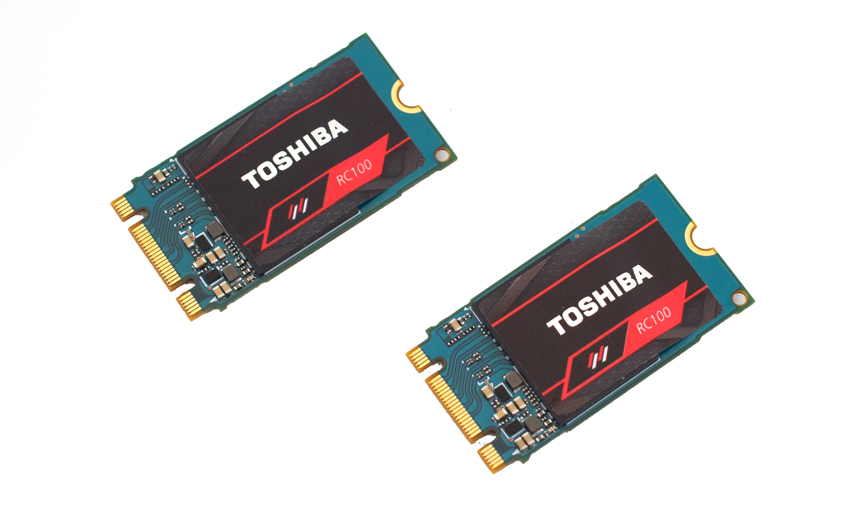 At just 42mm in length and 2.38 mm in height, the Toshiba OCZ RC100 is one of the smallest SSDs you’ll see on the market. Toshiba is able to fit it on the tiny M.2 2242 PCB because the entire SSD is contained within a single BGA chip. This makes it ideal for those looking to maximize the space inside their system, such as tablets and other ultra-portable systems. 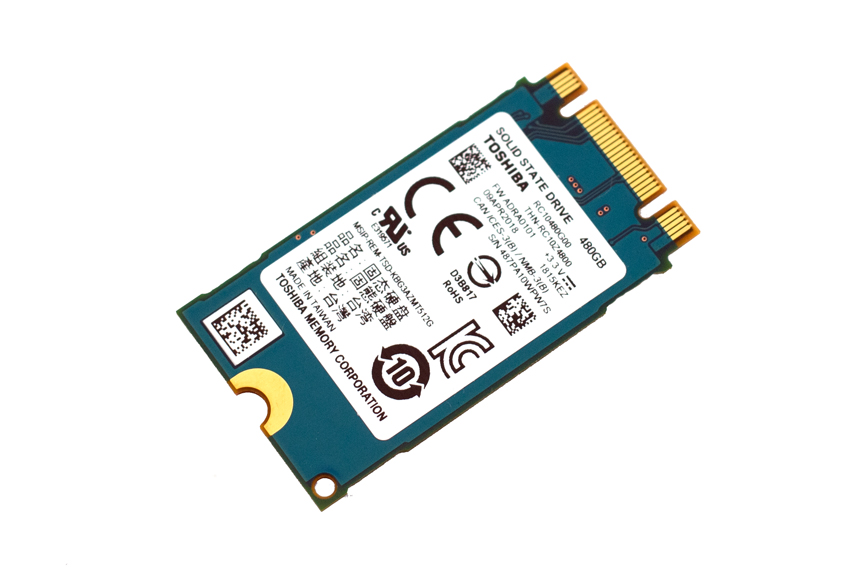 The front side of the RC100 has a sticker that covers the NAND chips and most of the PCB, which uses the design you’ve seen on other recent Toshiba/OCZ SSDs. It displays minimal information including the Toshiba branding and the model number. All capacities use the 64-layer 3D BiCS TLC V-NAND.

On the other side is a sticker on top of a blank PCB that displays more detailed information, including the form factor, capacity size certifications information.

When looking at the performance of rendering time (where less is better), we see troublesome results right away. Here, the RC100 480GB found itself at the bottom of the pack with 4,240.8 seconds, which was only better than the Kingston A1000 of the same capacity. 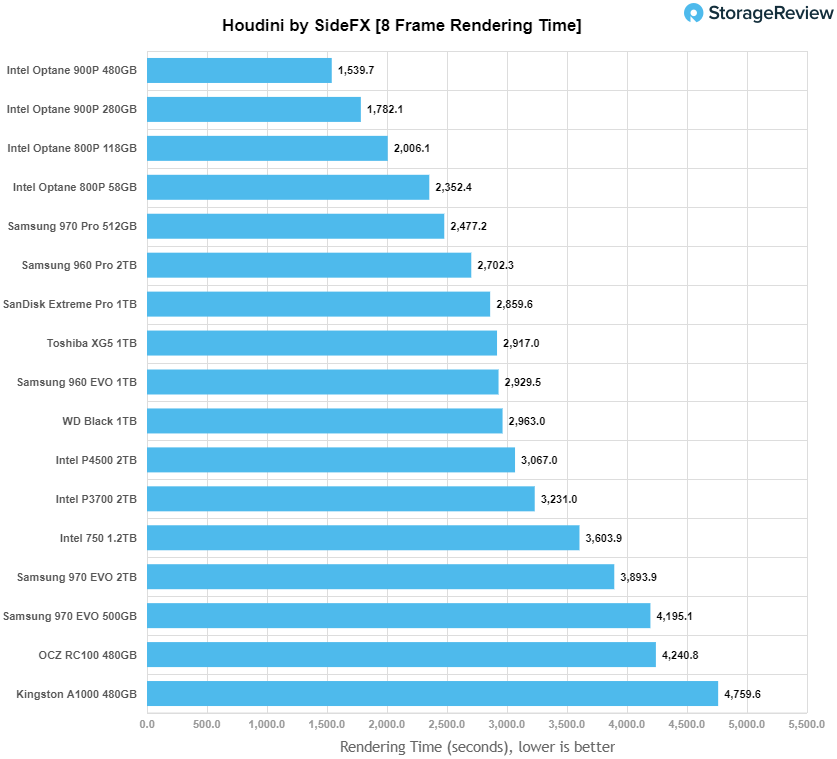 In our first VDBench Workload Analysis, we looked at random 4K read performance. In this workload scenario, the RC100 placed well behind the leaders and in last place with a peak performance of 190,597 IOPS and 664.6μs latency for the 480GB capacity.

Looking at 4K writes, the results were disappointing, to say the least. As you can see from the chart below, the RC100 was last place by a large margin and with latency spikes throughout the test (at one point it hit 14,291μs). More specifically, the new Toshiba drive had peak performance at just 14K IOPS and 5,419μs.

Switching gears to our 64K benchmarks, the RC100 placed third among the comparables, slightly outpacing the Kingston drive. Here, it had peak performance of 773.69MB/s and a latency of 1,358.7μs.

Unfortunately, the Toshiba drive slowed down to a snail’s pace with write performance once again as the chart clearly demonstrates. For 64K write, the 480GB RC100 placed well behind the other drives in both latency and throughput with a very disappointing peak performance of 49.26MB/s and 19,522μs.

We normally include a VDI benchmark as part of end-user SSD testing. Unfortunately the RC100 failed to complete the test in both the 240GB and 480GB capacities. As a result we have no data to share for this benchmark.

On paper, the Toshiba’s RC100 drive sounds like a great product for allowing mainstream consumers to finally get their hands on a low-cost NVMe drive at just $80 for the most popular mid-range capacity. Toshiba’s drive features the company’s new 64-layer BiCS FLASH and a cost-effective single-package, DRAM-less design to drive down the price inside the tiny. The RC100 also uses the more compact M.2 2242 form factor versus larger 2280 form factor M.2 2242 form factor, giving it a little more flexibility in deployment. Toshiba also quotes a solid 1,600MB/s in sequential reads and 1,100 MB/s in sequential writes, which is almost 5 times the speed of consumer SATA SSDs. Despite all of this, we were very disappointed with the write performance results of Toshiba’s new OCZ drive.

Its poor performance began in our Houdini test it came in second to last with 4,240.8 seconds for the 480GB capacity. In our VDBench Workload Analysis, the RC100 hit a peak performance of 190,597 IOPS and 664.6μs and 773.69MB/s and 1,358.7μs for the random 4K reads and sequential 64K reads, respectfully. These placed it around the last place position, right along with the Kingston drive. Write, however, were much worse, where the drive had peak performance at just 14K IOPS and 5,419μs and 49.26MB/s and 19,522μs in our random and sequential charts. This was significantly behind all other tested drives. The drive failed to complete the VDI workloads.

Overall, it was disappointing to see the write speed hit on the RC100, as the market is ready for big companies like Toshiba to release well-performing, yet affordable consumer NVMe drives. For many buyers it will come down to cost, or a size requirement to choose the RC100, but if there is some leeway, better alternatives exist.

Unless there are hefty price cuts down the road, those looking for an affordable performant NVMe drive will have to look elsewhere, as the drive has an uphill battle against the competition.