The Toshiba MQ01ABDH is a SSHD that ranges up to 1TB in capacity, features performance assisted by 32MB of DRAM as a buffer and 8GB of Toshiba’s own NAND flash, and comes in a slim 7mm (MQ01ADFH) or standard 9.5mm (MQ01ABDH) form factor. As with almost all other HDDs hitting the market these days, the MQ01ABDH spins at 5,400RPM, which helps to reduce power consumption which matches the intended applications. Since the Toshiba SSHDs (which is how they’ll be referenced in this review) are shipping in both the slim and standard form factors, the drives are primarily designed for thin and light notebooks where users want to leverage the transfer rates of SSDs without making the sacrifice of surrendering several hundred gigabytes of storage.

The Toshiba MQ01ABDH is a SSHD that ranges up to 1TB in capacity, features performance assisted by 32MB of DRAM as a buffer and 8GB of Toshiba’s own NAND flash, and comes in a slim 7mm (MQ01ADFH) or standard 9.5mm (MQ01ABDH) form factor. As with almost all other HDDs hitting the market these days, the MQ01ABDH spins at 5,400RPM, which helps to reduce power consumption which matches the intended applications. Since the Toshiba SSHDs (which is how they’ll be referenced in this review) are shipping in both the slim and standard form factors, the drives are primarily designed for thin and light notebooks where users want to leverage the transfer rates of SSDs without making the sacrifice of surrendering several hundred gigabytes of storage.

The SSHD space is now developing more quickly as consumers attempt to gain additional performance compared to what they could natively achieve with a HDD. Simultaneously, consumers don’t want to give up the capacity they require and the price-point they need either. With that in mind, Seagate has already launched its third-generation SSHD, WD ships an OEM-only consumer model, and, with the launch of the 7mm form factor, Toshiba is expanding its line. 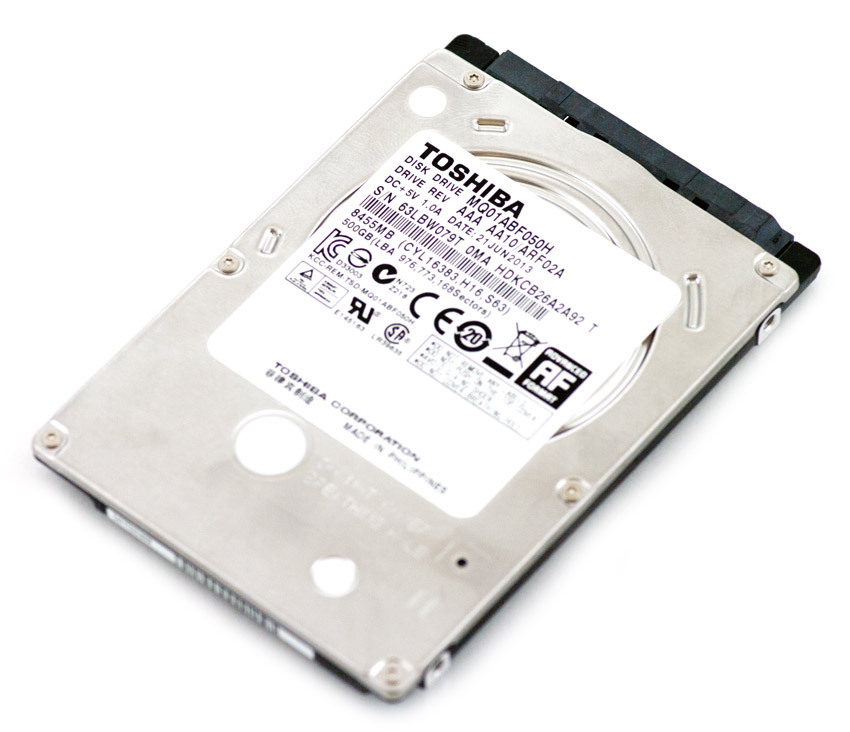 Toshiba recognizes that the drives clearly won’t put-away SSDs, but its focus lies elsewhere. Toshiba aims to provide consumers with a reasonably priced option that still increases performance at the same capacity point. To that end, the Toshiba SSHDs feature self-learning algorithms that tune performance to meet individual users’ data access patterns. The drives thus create a pool of “hot” data to store in the NAND flash to boost overall performance. How well the data is cached will largely effect the drives performance, as will the limit of 8GB of NAND – the results of which we will see in testing.

Since our review was initially published, pricing details have changed significantly, which has in turn affected our opinion on the Toshiba SSHD. We’ll dive more into that in the conclusion, with pricing details provided immediately below.

The Toshiba SSHD features a black metal body with a silver cover and ships in both 7mm and 9.5mm form factors. The 7mm z-Height provides either 320GB or 500GB of storage, while the 9.5mm delivers either 750GB or 1TB. These form factors enable users of both typical and thin notebooks to benefit from SSHD technology.

Looking at the 1TB (MQ01ABD100H) and starting from the top, there is a white drive information label. The sides present 4 screw holes for simple mounting, and the bottom features the circuit board. Visible from the front are the standard SATA and power connectors.

Disassembly requires removing 6 screws from the circuit board. With the drive taken apart, we can see that there is 32MB of DRAM. We also see Toshiba’s 8GB of MLC NAND. At 8GB, users should see some performance enhancements, but that increase could be even greater with say 16 or even 32GB. Being an SSHD, there is an additional controller. The Link-a-Media controller is for the NAND flash storage, and the Marvell 88i9317-RA12 is the HDD’s controller. 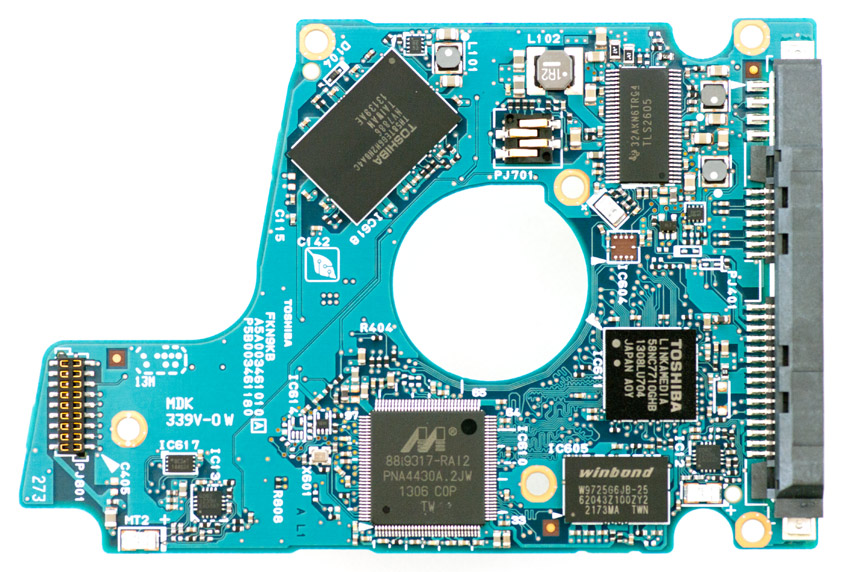 When it comes to measuring performance of the Toshiba SSHD, the two categories of benchmarks that we commonly test all consumer HDDs and SSDs on show strengths in different areas. The first of the two groups, our synthetic benchmarks are geared at showing the performance of the drive in an uncached “worst case” scenario. We performed this testing which can be identified by “Full LBA,” but we also forced IOMeter to stay within the cache by using a 500MB file size for a separate “Cached” testing of the Toshiba SSHD. Our real-world traces stay within the cache pool and allow the drive to cache data and better show how the drive would perform during repetitive day-to-day activities. Our synethtic benchmarks are geared to show worst-case performance across all comparables, while also highlighting cached performance on the drive being tested. Since not all files on the system will be cached, our main focus is on the un-cached performance of each drive.

Using our Consumer Testing Platform, we measured 2MB sequential speeds, and the Toshiba SSHD 500GB came in at 114.48MB/s read and 84.02MB/s write, placing it near the upper-middle of the pack.

In the 4K Random Transfers MB/s, the Toshiba SSHD 500GB again ranked near the lower end of the group, posting 0.226MB/s and 0.485 MB/s. Cached performance was clearly substantially greater. 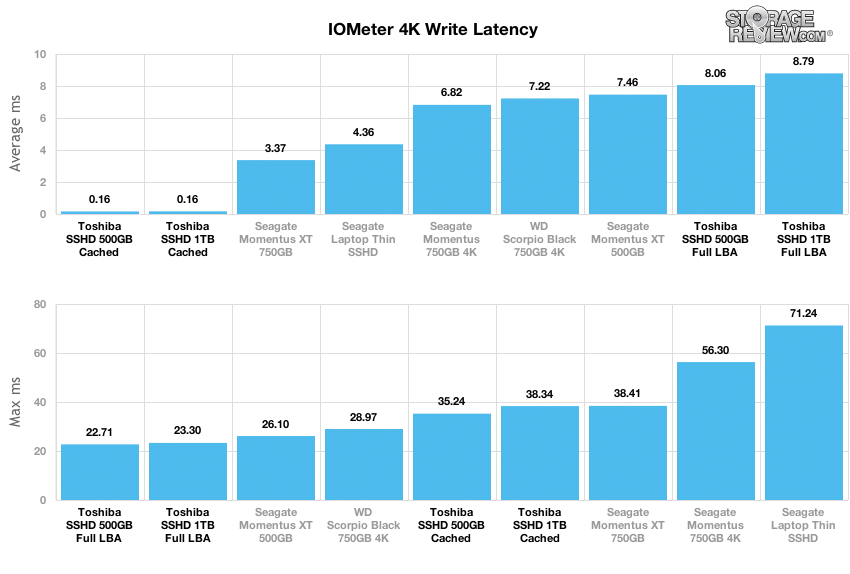 Our last series of synthetic benchmarks compare the hard drives in a series of server mixed-workloads with a queue depth of ranging from 1 to 128. Each of our server profile tests has a strong preference towards read activity, ranging from 67% read with our database profile to 100% read in our web server profile. In all of our mixed workloads, the Toshiba SSHD performed exceptionally. For each test, it ranked either first or second along with the Seagate Gen2. Overall, the SSHDs performed significantly better than standard HDD’s. The Gen2’s slight performance advantage over the Gen3 comes from its 7,200 RPM spins compared to the Gen3’s 5,400 RPM (with Seagate’s standardization of laptop drives to 5,400 RPM). 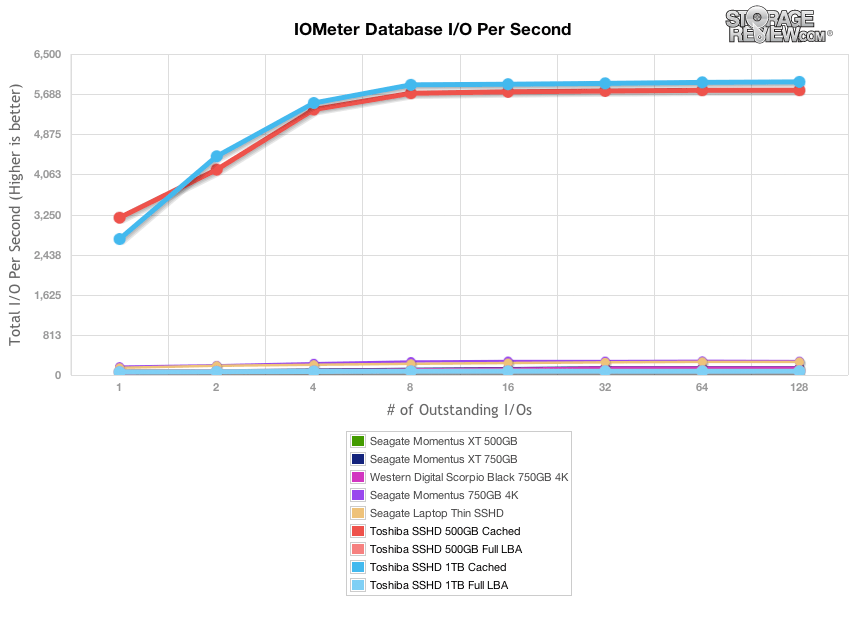 Our Database profile showed the Toshiba SSHD 500GB steady at about 75 IOPS, peaking at 76 IOPS. These figures were on the low-end of the group, however the cached figures were of course substantially higher. 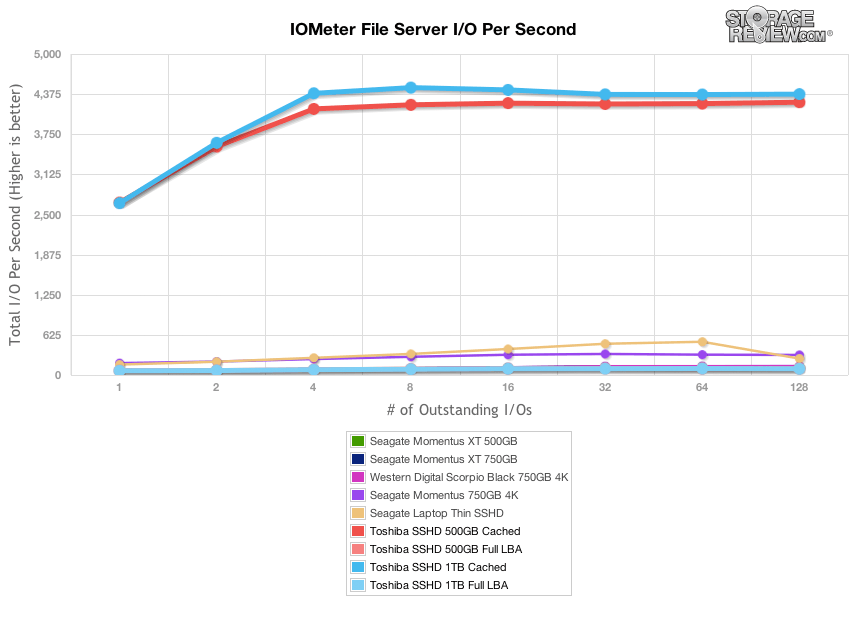 In the File Server profile, the Toshiba SSHD offered less performance than the competition, peaking at 102 IOPS and steady at 99 IOPS. 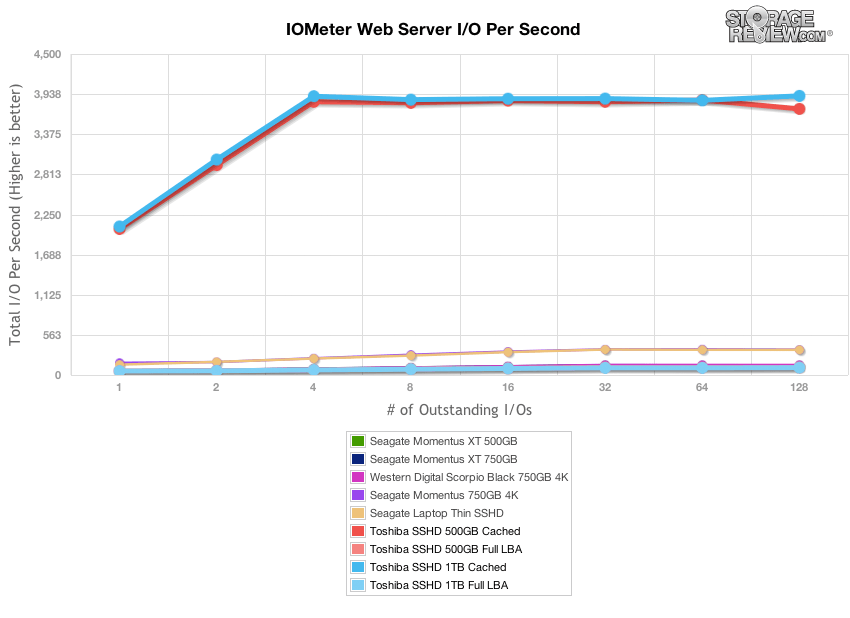 Webserver numbers were also at the back of the group, peaking and steadying around 105 IOPS. 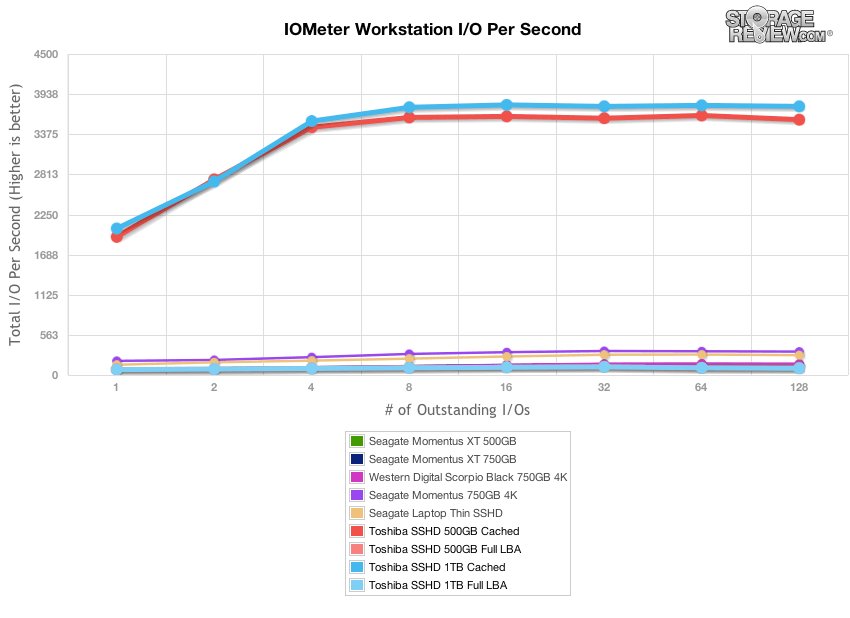 Rounding out the figures, in our Workstation profile, the Toshiba SSHD 500GB peaked around 113 IOPS and steadied near 100 IOPS. 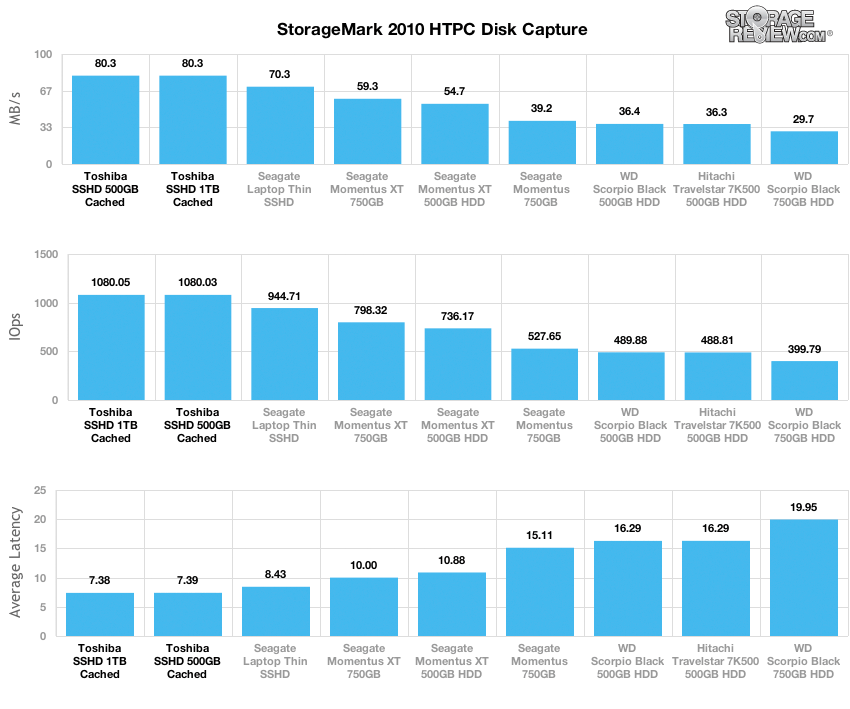 In the StorageMark2010 HTPC 4K Disk Capture, the Toshiba SSHD 500GB offered formidable performance, delivering the greatest throughput and lowest latency of the group. The drive pushed out 80.3 MB/s, 1080.03 IOPS and an average latency of just 7.39ms. 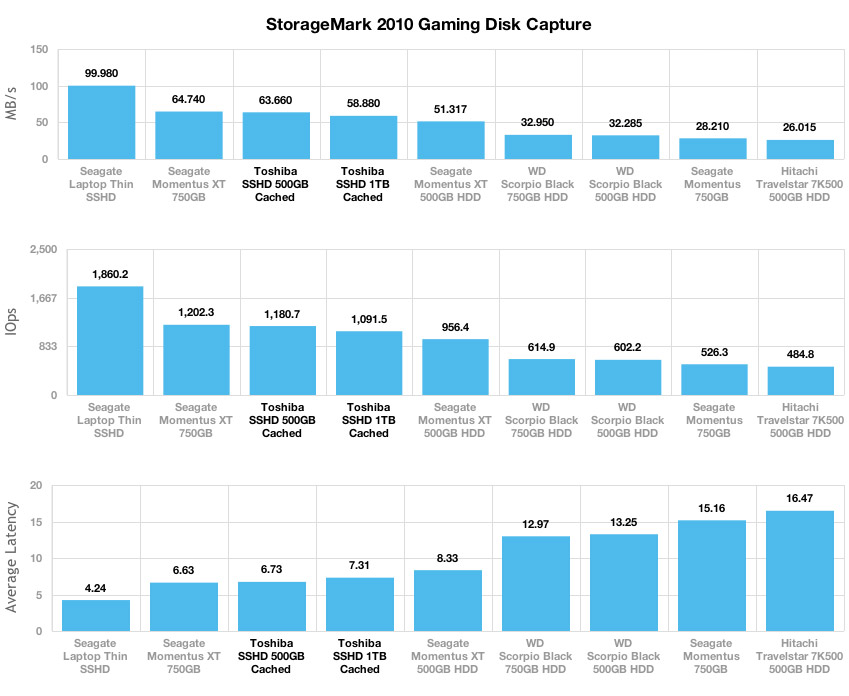 In the StorageMark 2010 Gaming Mark Capture, the Toshiba SSHD 500GB hit near the upper-middle of the group, but still behind the second and third generation Seagate SSHDs. It delivered 63.66MB/s, 1,181 IOPS, and an average latency of 6.73ms.

With any laptop drive, power consumption is an important factor for users. The key sources of power draw get narrowed down to either the bright screen or the storage device used. In the next test, we record the average power consumed over a small range of synthetic benchmarks.

The Toshiba SSHDs are designed primarily for notebook users that are searching for storage that enables them to maintain a high capacity point while still achieving some of the performance that SSDs deliver. Toshiba SSHDs provide just that with 8GB of NAND flash meshed with 320GB or 500GB in a 7mm thin form factor and 750GB or 1TB in a 9.5mm form factor. The NAND flash utilizes self-learning algorithms that Toshiba engineered to adjust performance according to specific users’ access patterns. In other words, the 8GB of NAND store a pool of “hot,” more frequently accessed data to drive performance.

We evaluated the Toshiba SSHD’s performance both utilizing its caching capabilities by setting IOMeter to a 500MB file size and by examining how it would operate while being hitting outside the cache as well. In the majority of our testing, the Toshiba SSHD performed at or near the front of the group while utilizing its caching functionality. Those results display exactly what consumers hope to achieve from an SSHD. Hitting the cache delivers transfers at rates often closer to SSDs. We saw that in our real-world testing where the Toshiba SSHD was tops in the HTPC testing that evaluates performance while streaming, downloading and playing movies, and we saw it in the Gaming trace. The Toshiba SSHD also performed well, ranking at the top of the group in 2MB sequential, 4k random, 4k latency and in the server-mixed workloads. On the other hand, throughout the testing, hitting outside of the cache left performance often lagging behind some of the comparables.

We had initially noted here that the Toshiba SSHD provided a solid price to performance ratio. Its performance within the cache was excellent and the pricing we saw initially was quite competitive. However, since the publication of the review, we’ve received updated pricing information, setting the Toshiba SSHD 500GB at $159 and the 1TB at $199. Comparing that pricing against other SSHD prices shows a considerable delta. Some SSHDs can be purchased at 50-75% of that cost. While there’s no doubt that the Toshiba SSHD provides performance enhancements against traditional HDDs, it may be priced out of some consumers’ ranges.

The Toshiba SSHDs ship in form factors designed for notebook implementation so that users can benefit from robust capacity points while still gaining performance closer to SSD speeds utilizing the 8GB of NAND flash.