The SanDisk Connect Wireless Flash Drive is available as a 16GB or 32GB capacity portable storage device that enables users to store, share and stream files using iOS, Android or Kindle Fire apps. The unit utilizes SD cards, which SanDisk packages with the device for its storage. In operation, the Connect Wireless Flash Drive creates its own network, so no Internet is required and the device can be used anywhere. Additionally, it transmits the network powerfully enough so that a mobile device can connect as far out as 150 feet away – particularly handy when accessing the unit across rooms in a house or apartment.

The SanDisk Connect Wireless Flash Drive is available as a 16GB or 32GB capacity portable storage device that enables users to store, share and stream files using iOS, Android or Kindle Fire apps. The unit utilizes SD cards, which SanDisk packages with the device for its storage. In operation, the Connect Wireless Flash Drive creates its own network, so no Internet is required and the device can be used anywhere. Additionally, it transmits the network powerfully enough so that a mobile device can connect as far out as 150 feet away – particularly handy when accessing the unit across rooms in a house or apartment. 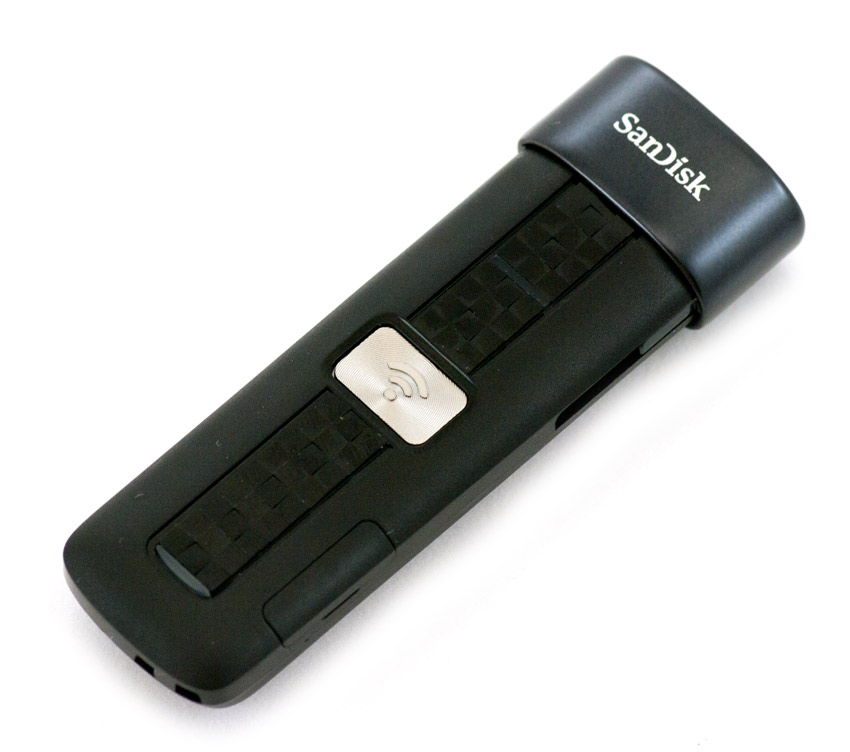 There are some other features that make the SanDisk Connect Wireless Flash Drive stand out, especially given its size at about the length and width of a finger. It’s not the first device to create its own network and provide consumers with streaming content functionality, but SanDisk is claiming it to be the smallest one available on the market. Additionally, while several other devices in the space need to be plugged in to the wall to charge with an AC adaptor, the Connect Wireless Flash Drive fully charges over USB in about 2 hours. Users can of course utilize a compatible USB wall-plug charger if they so choose. It is worth noting here that the device is USB 2.0, so transfer rates will be limited by the interface – though the majority of transfers will take place wirelessly after the initial setup anyhow.

Additionally, the Connect Wireless Flash Drive can also simultaneously connect to up to 8 devices, and it can stream video to as many as 3 devices. To ensure security, users can set up Wi-Fi password protection (WPA2). The drive also provides 4 hours of continuous streaming on a single charge. While that figure doesn’t touch the 7-10 hours you can find with portable wireless HDDs, it’s fairly substantial given its size.

The SanDisk Connect Wireless Flash Drive will be available in August with an MSRP of $49.99 for 16GB or $59.99 for 32GB, which includes a one-year warranty.

The SanDisk Connect Wireless Flash Drive is composed of black plastic and comes in a really small design – just around the size of a finger. The device features SanDisk branding on the front, as well as the wireless button which powers on the device. The USB connector is tucked under a sliding cap.

The bottom of the Connect Wireless Flash Drive displays the branding. The right side houses a slot for the microSD card which can be accessed by sliding off the flap. 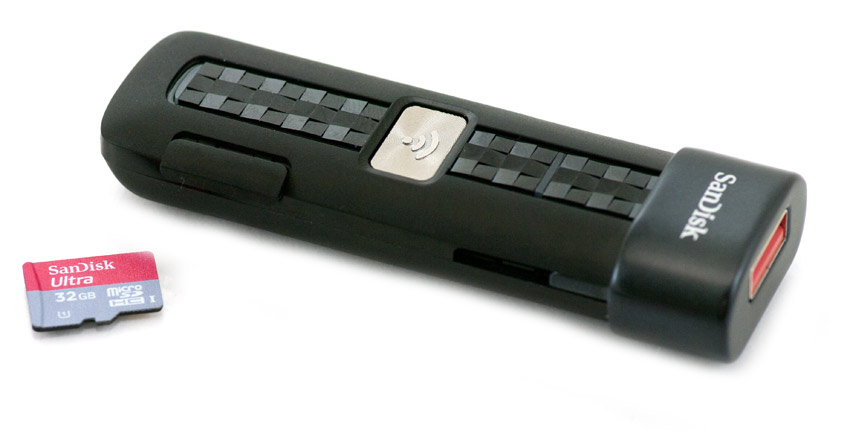 In use, there are two LED indicators that inform users about the device’s operation. The top amber-colored LED light above is on while charging and flashes during USB data transfers. The other LED flashes blue and shows that the drive is broadcasting a signal.

Getting the SanDisk Connect Wireless Flash Drive up and running requires very little effort. If the device hasn’t been charged, users can do so by plugging it into a USB port or a USB AC adapter if they have one. Charging shouldn’t take more than 2 hours. On that note, it would be nice to have an in-app gauge or different LED colors or blinking mechanisms to display battery life. As is stands, when battery life reaches roughly 10%, the amber LED blinks 3 times in between every blue blink for Wi-Fi.

We installed the iOS app, turned on the device and connected to its network, and then we were uploading and downloading media and other files in no time. It’s really simple to transfer video, music, pictures and other files using the intuitive in-app icons. 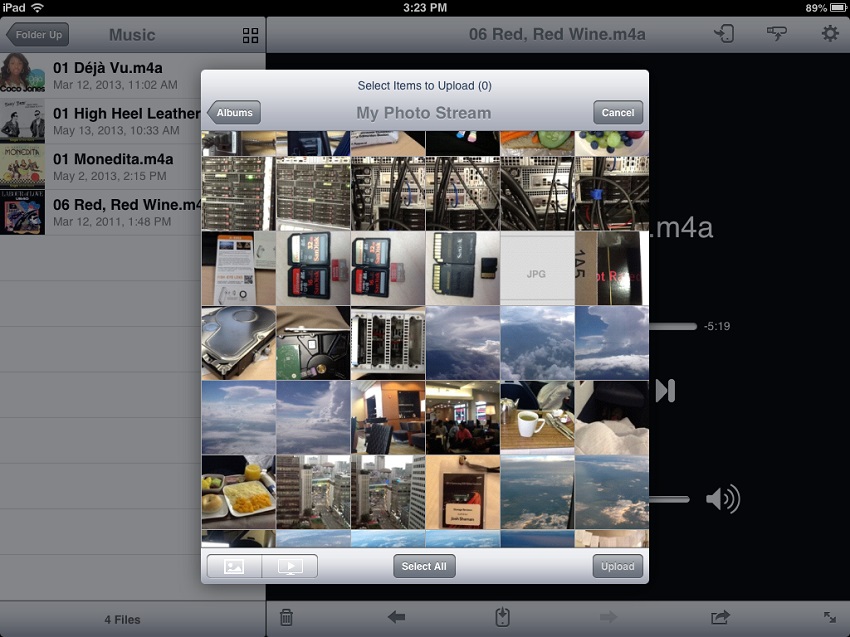 The device supports just about any file type, though users are of course limited to their device’s native support.

One thing users might want to do when they start using the Connect Wireless Flash Drive is to set a password. For this and other configurations, you need to click on the gear icon. Here, you can rename the network, turn on a power save timer using the allocated intervals, and set video compression during uploads. 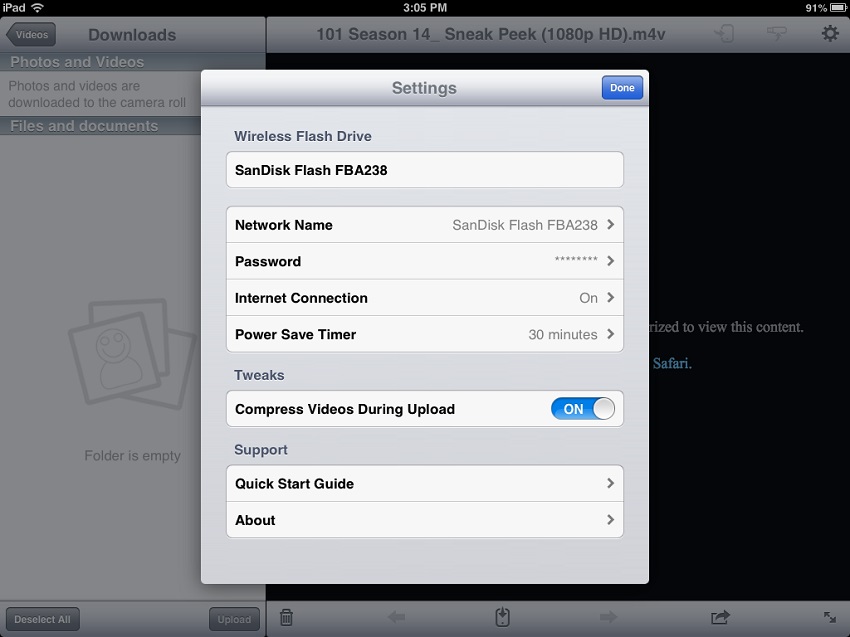 You can also pass-through connect to a network so that you can simultaneously connect to the device and the Internet.

We did run into a couple of issues while using the SanDisk Connect Wireless Flash Drive, however as its still not in general availability, we assume SanDisk will get it all worked out. For instance, we had an issue where once a dialogue box was opened, it wouldn’t close. We had to fully shutdown the app and re-enter to get the dialogue boxes to go away. Additionally, the configuration interface wasn’t always operational, but SanDisk has informed us it has been fixed and will release shortly in the new update. 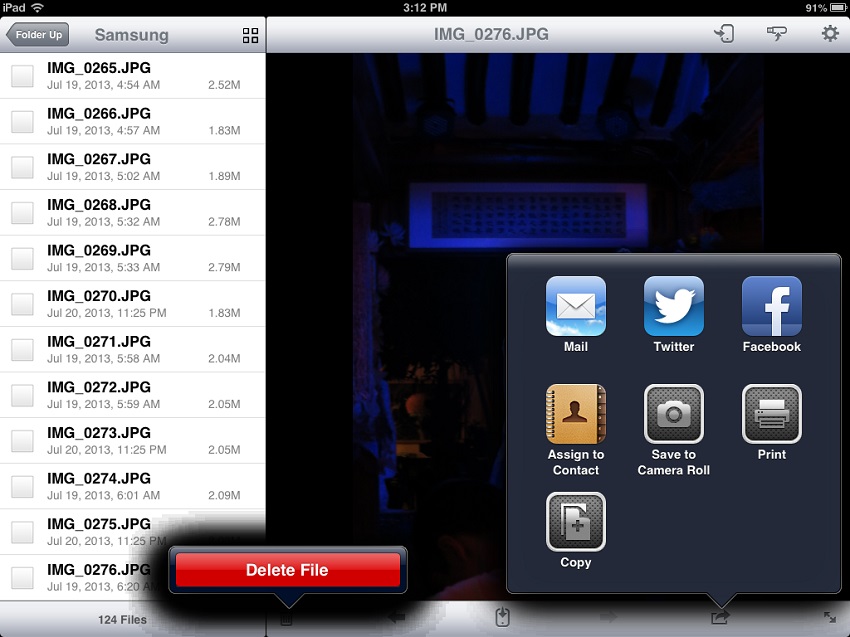 Overall, the app is extremely simple to use, and with little effort users will be sharing and streaming content right out of the box. Though we would like to see a unified app for this device and its sibling, the SanDisk Connect Wireless Media Drive, this current offering is more than serviceable.

The SanDisk Connect Wireless Flash Drive enables users to gain access to streaming, storing and sharing either 16GB or 32GB of content with no requirement for Internet access. The device generates its own wireless signal through which users can connect anywhere at anytime. The device supports up to 8 concurrent connections from mobile devices and can stream video to up to 3 devices at the same time. Its overall range is rated up to 150 feet, and the drive also features WPA2 password protection to keep the network secure if necessary. With four hours of continuous streaming on a single charge, the device offers plenty of functionality in a tiny package.

As far as features go, the SanDisk Connect Wireless Flash Drive has a lot to offer. It enables users to connect to up to 8 mobile devices at the same time, and it can stream video to 3 devices concurrently. It also offers password protection and pass-through internet connectivity so that users can access the Internet and utilize the drive’s native functionality at the same time. Additionally, though the app needs some work to fix a couple of glitches we found, it is incredibly easy to use. Additionally, as we noted above, SanDisk also quotes the device’s streaming capability at up to 150 feet. When we tested the Connect Wireless Flash Drive, we did notice performance took a hit as the distance from the unit increased by more than a couple of rooms away, and it didn’t seem to quite hit the 150 foot mark. Given the device’s size, however, it will probably be going with the user or will still be within the range of usability.

At the end of the day, the SanDisk Connect Wireless Flash Drive is only $49.99 for 16GB or $59.99 for 32GB. Compared to others in its class such as the Kingston MobileLite Wireless, the value is high. That device currently runs $59.99 and doesn’t include a microSD, though its battery life is one hour better at 5 hours.