Announced last month, Toshiba’s XG5 is the company’s newest M.2 form factor (2280) NVMe SSD. The XG5 is also the first SSD from Toshiba to leverage the company’s 64-layer BiCS 3D flash memory (TLC) which delivers the highest layer count in the market. The XG5 comes in three capacities ranging from 256GB to 1TB and uses a single-sided form factor to enhance deployment flexibility in devices like ultra-thin computers or embedded/edge computing devices. The XG5 is targeted at mainstream client computing use cases where there’s a clear need for performance, while still respecting a balance of power consumption and overall drive cost. For organizations with an enhanced security need, the XG5 comes in an SED flavor, supporting TCG Opal Version 2.01.

Announced last month, Toshiba’s XG5 is the company’s newest M.2 form factor (2280) NVMe SSD. The XG5 is also the first SSD from Toshiba to leverage the company’s 64-layer BiCS 3D flash memory (TLC) which delivers the highest layer count in the market. The XG5 comes in three capacities ranging from 256GB to 1TB and uses a single-sided form factor to enhance deployment flexibility in devices like ultra-thin computers or embedded/edge computing devices. The XG5 is targeted at mainstream client computing use cases where there’s a clear need for performance, while still respecting a balance of power consumption and overall drive cost. For organizations with an enhanced security need, the XG5 comes in an SED flavor, supporting TCG Opal Version 2.01. 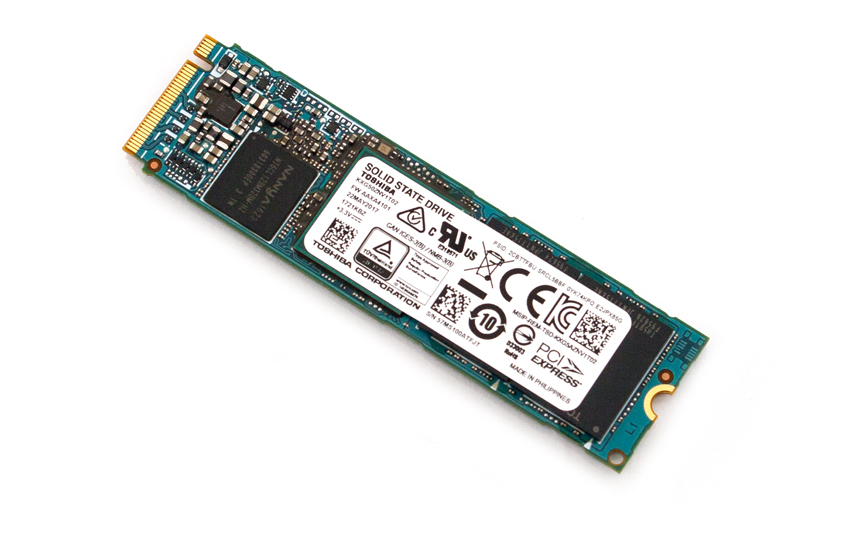 The XG5 is primarily an OEM product, it was first shown at Dell EMC World in May. It’s a little out of character then for Toshiba to sample the drive out for reviews. Toshiba is very excited though about showing their leadership in the space, not just in terms of the new NAND, which is clearly the highlight, but in overall design and performance. Toshiba is quoting speeds up to 3000 MB/s of sequential read and 2100 MB/s of sequential write. Reminding us all that the end of SATA in performance computing is largely here, Toshiba says those numbers are up to 5.4 times faster on sequential read performance and up to 3.8 times faster on sequential write performance. To help handle the sometimes uneven needs of a PC, the XG5 includes an SLC cache to help handle burst workloads. For mobile users, the drive uses less 3mW in standby to help get the most out of batery life. 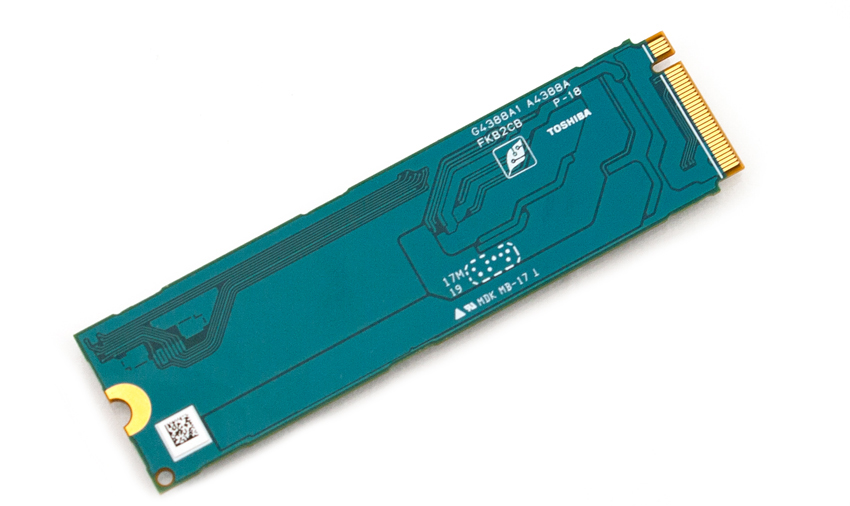 The Toshiba XG5 SSDs are shipping to OEMs now, our review unit is the 1TB capacity.

All consumer SSD benchmarks are conducted with the StorageReview HP Z640 Workstation. We compared the Toshiba XG5 M.2 SSD to the following drives:

In our 2MB sequential benchmark, the Toshiba XG5 recorded impressive read speeds with 2,101.25MB/s; however, writes fell behind significantly at just 879.44MB/s. The top performer in reads and writes were the Samsung 960 Pro 1TB and the 2TB model, respectively.

The Toshiba XG5 showed respectable numbers again during our random 2MB transfers (though a bit slower in the write column), with reads and writes of 1,339.76MB/s and 895.07MB/s, respectively. The OCZ drive was by far the best in reads with a blistering 1,771.58MB/s.

Our random 4K benchmark puts more strain on the drives in terms of throughput. Here, the Toshiba XG5 Pro posted mid-range numbers with 32.48MB/s read and 143.08MB/s write. The top performing drive was the Samsung 950 Pro.

In terms of our 4K write latency benchmark, the Toshiba drive moved more toward the bottom of the leaderboard with 0.0269ms and 4.70ms in average and maximum latency, respectively. 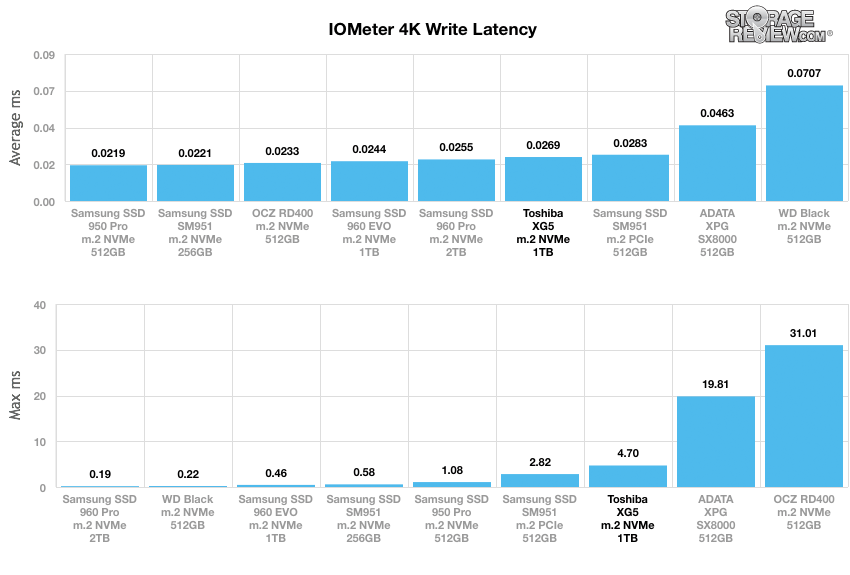 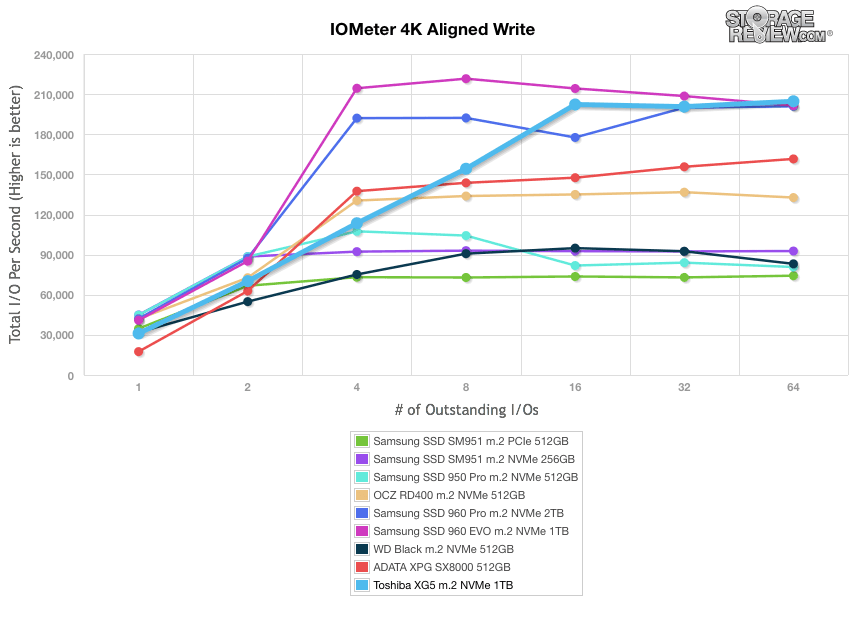 This trend continued with our aligned-read benchmark (though just falling behind the Samsung 960 drives this time), as the Toshiba XG5 posted an IOPS range of 6,389.50 IOPS and peaked at an impressive 233,637.41 IOPS. 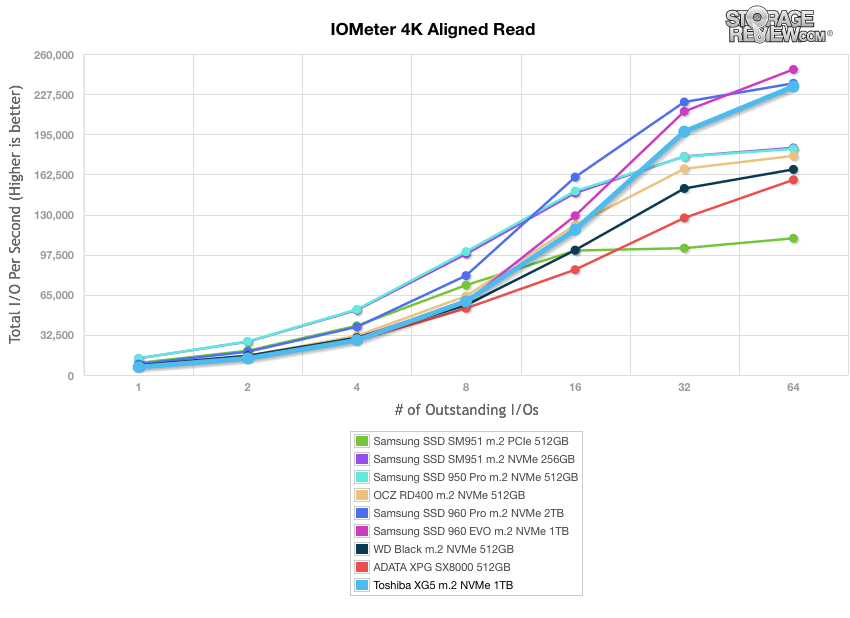 Our final consumer-synthetic benchmarks compare the drives in a series of mixed-server workloads with a queue depth of 1 to 128. Each server profile has a strong bias towards read activity, ranging from 67% read with the database profile to 100% read in the web server profile. In these tests, the Toshiba XG5 was by far the top performing M.2 drive.

The database profile features a 67% read and 33% write workload, focusing on transfers around 8K in size. Here, Toshiba XG5 dominated the leaderboard with a range of 8,922.78 IOPS to a whopping 198,104 IOPS, which was first among the tested drives. 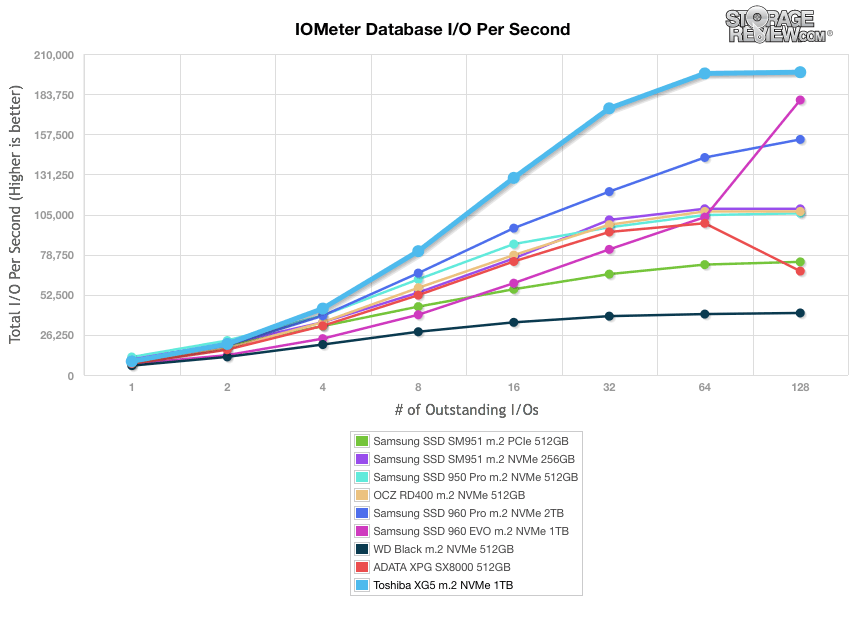 Our next benchmark is the read-only web-server profile, which uses transfer sizes ranging from 512 bytes to 512KB. In this scenario, the Toshiba XG5 showed another impressive performance with a range of 7,195.02 IOPS through 102,783.43 IOPS, again placing at the top of the pack. 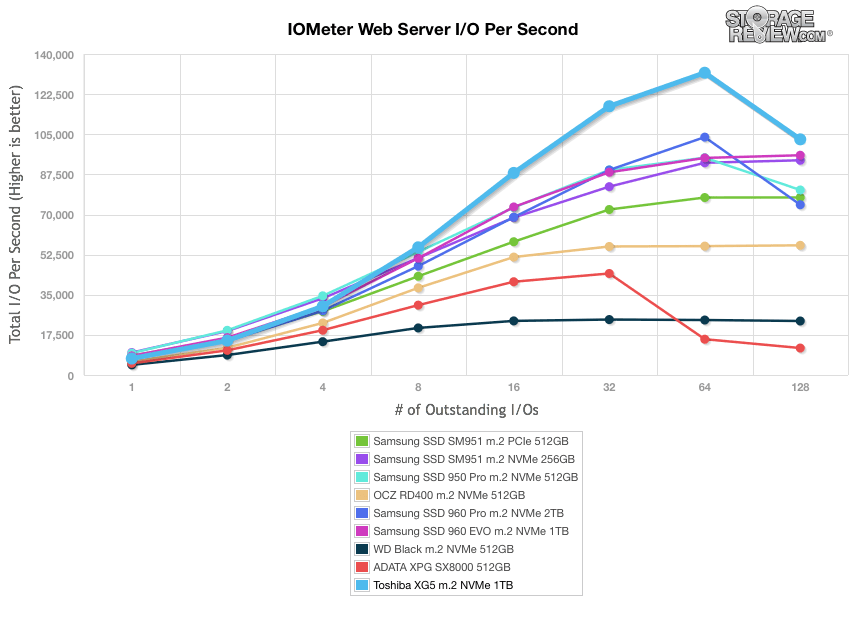 During the file-server profile, which has 80% read and 20% write workload spread out over multiple transfer sizes ranging from 512-bytes to 64KB, the Toshiba XG5 showed better performance with the widest margin yet, posting a range of 6,256.03 IOPS through 175,874.30 IOPS. 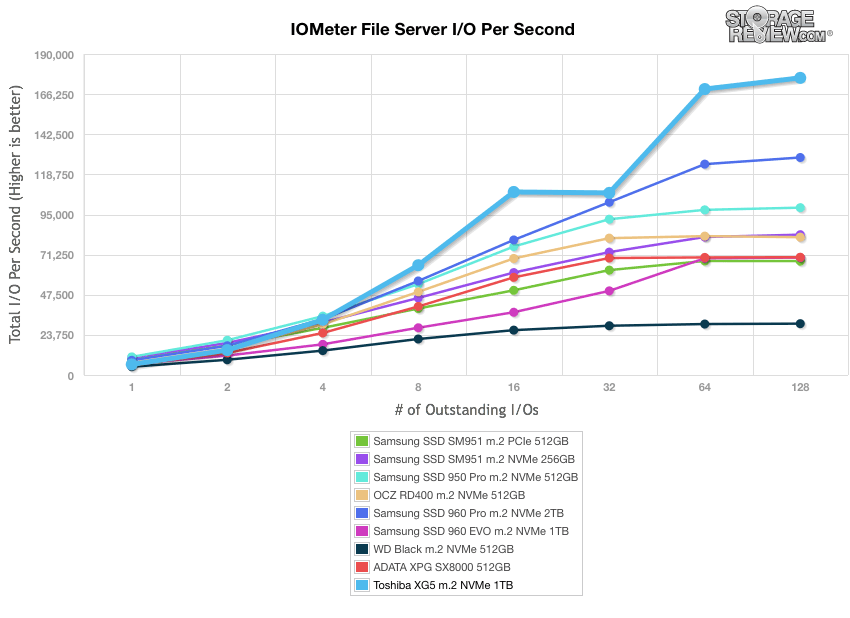 The last profile looks at workstation activity, with a 20% write and 80% read mixture using 8K transfers. The Toshiba XG5 continued its dominance with another impressive, best-of-class performance again at 8,251.27 IOPS to 203,025.98 IOPS. 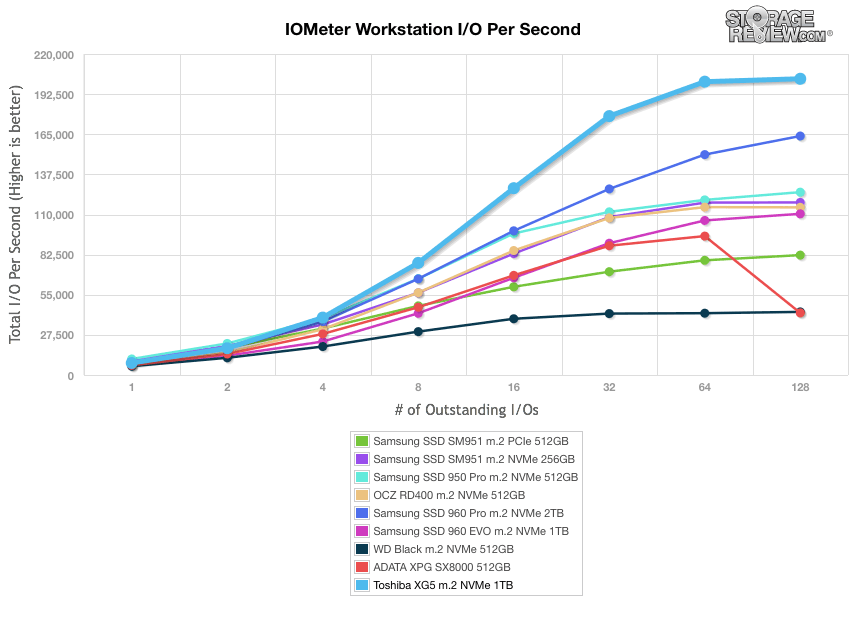 While the results of synthetic benchmarks are important in identifying the key strengths and weaknesses of a drive, performance in these tests does not always translate directly into real-world situations. To get a better idea how the Toshiba XG5 drive will handle itself in the field, we will chart StorageMark 2010 HTPC, Productivity, and Gaming traces against comparable drives. Higher IOPS and MB/s rates with lower latency times are preferred.

The Toshiba XG5 M.2 NVMe 1TB posted another best-in-class performance with 35,869 IOPS, 1.7GB/s, and 0.200ms in average latency, placing it well above all the other tested drives. 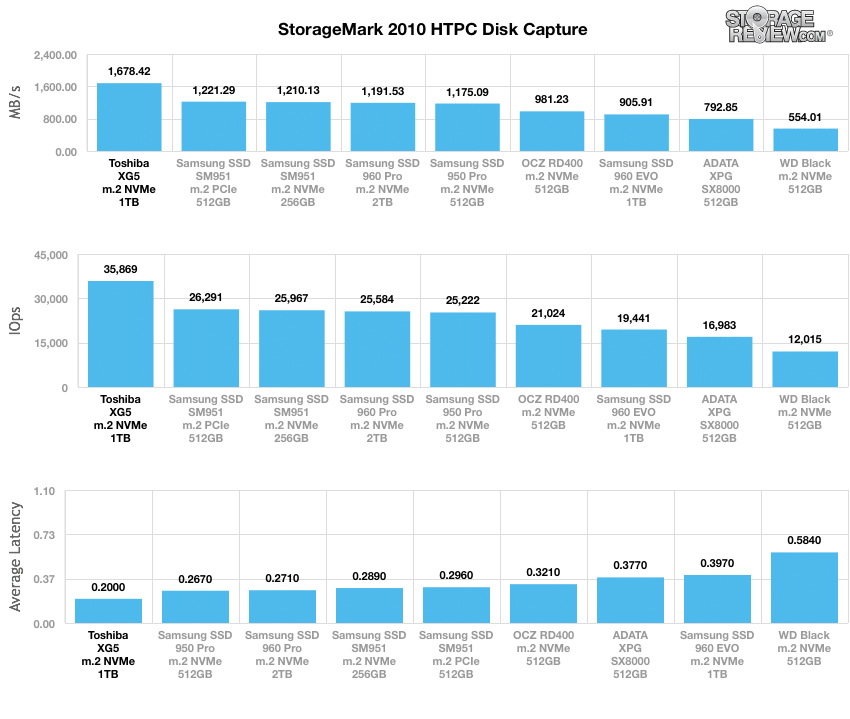 In our gaming benchmark, results picked up significantly. The Toshiba XG5 showed an impressive 38,095 IOPS, 1.9GB/s, and 0.1850ms in average latency, which placed it in the top spot on the leaderboard, just edging out the Samsung 960 Pro 2TB. The XG5 is Toshiba’s first M.2 drive to leverage the company’s new new 64-layer BiCS 3D flash memory. The drive is single-sided but still comes in capacities up to 1TB. Its single-sided design makes it ideal for ultra-thin notebooks and edge computing devices. Beyond capacity, the drive has an SED option and support for TCG Opal Version 2.01 for the security minded and it has quoted sequential speeds of 3GB/s read and 2.1GB/s write

Looking at performance, the XG5 was able to deliver top-level performance in several categories even displacing the Samsung M.2 drives that have held the crown from their release. In our mixed-server workloads the drive flat out crushed the competition, in file server and workstation the others weren’t even close. The XG5 took the top spot in our HTPC disk capture with 35,869 IOPS, 1.7GB/s, and 0.200ms in average latency and top spot in our gaming disk capture with 38,095 IOPS, 1.9GB/s, and 0.1850ms. With the rest of our benchmarks the drive landed near the middle, the only exception being that it was a bit on the higher side of 4K latency.

The Toshiba XG5 is a very impressive drive, giving OEMs a fantastic alternative for systems needing a balanced combination of performance, battery impact and pricing. While this helps the system upgrader very little, one could probably accurately speculate that an OCZ retail channel version of this drive will emerge later this year. In either case, Toshiba is doing a very nice job of putting together a high-quality mix of SSDs throughout both their enterprise and client portfolios; the XG5 simply being the latest example.

OEMs looking for a high performing M.2 NVMe SSD need to look no farther than the Toshiba XG5. When the company releases a version under its OCZ banner, consumers can get their hands on it to upgrade their devices.