Intel’s latest client SSD featuring its new 64-Layer, TLC, Intel 3D NAND, is the 545S Series. The first version available, and the subject of this review, is the 2.5” form factor with 512GB capacity. Intel did state that it would be releasing more capacities, ranging form 128GB up to 2TB, and a M.2 form factor as well. The new drive is a SATA drive and will serve as an HDD replacement, offering better performance and lower power one typically sees when switching form SSD to HDD.

Intel’s latest client SSD featuring its new 64-Layer, TLC, Intel 3D NAND, is the 545S Series. The first version available, and the subject of this review, is the 2.5” form factor with 512GB capacity. Intel did state that it would be releasing more capacities, ranging form 128GB up to 2TB, and a M.2 form factor as well. The new drive is a SATA drive and will serve as an HDD replacement, offering better performance and lower power one typically sees when switching form SSD to HDD. 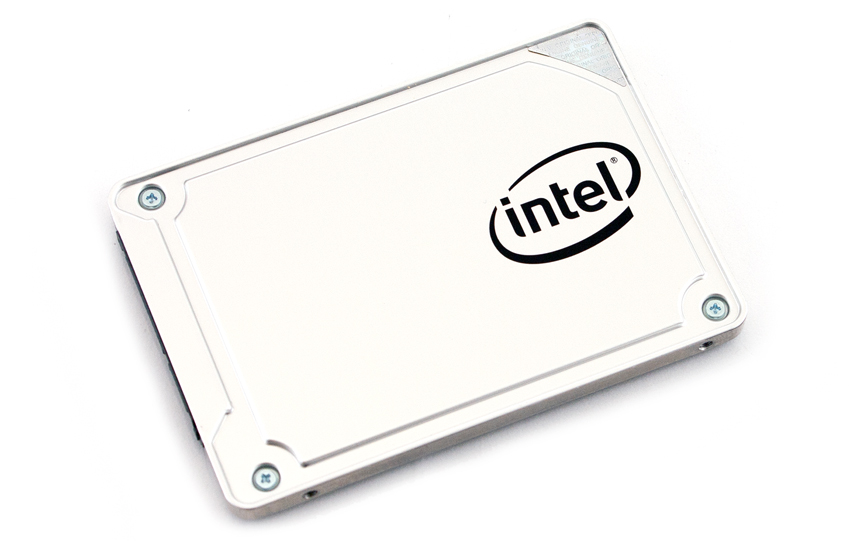 The latest version of Intel’s 64-Layer, TLC, 3D NAND offers up to 20% higher areal density and more GB per wafer. Adding this technology to a client drive will allow customers an innovative method for upgrading their HDD. The 545S also comes with broad industry validation, meaning it will work with most computers. The drive features end-to-end data protection through hardware and Intel’s Data Migration Software to further ease the upgrade.

The drive has a no frills design with a solid aluminum case. The top has Intel branding on one side. The bottom has a sticker indicating series, capacity, and other information such as model and serial number. 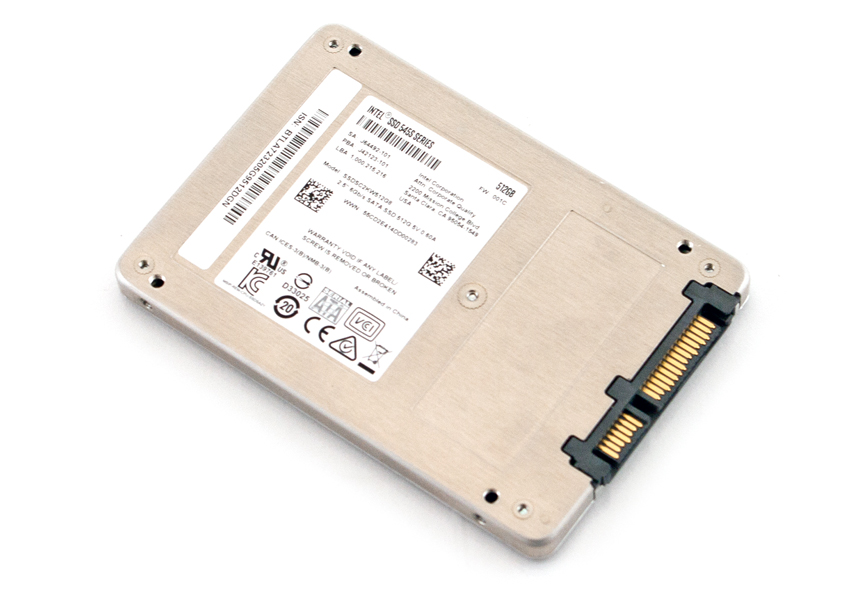 Opening up the case we see two of the Intel NAND packs on the top of the PCB. 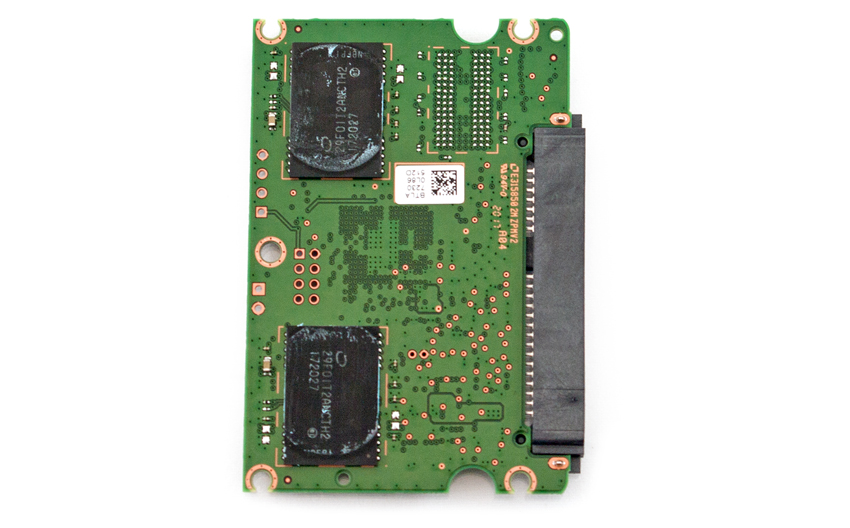 On the other side of the PCB two more NAND packs as well as the SMI 2259 controller. 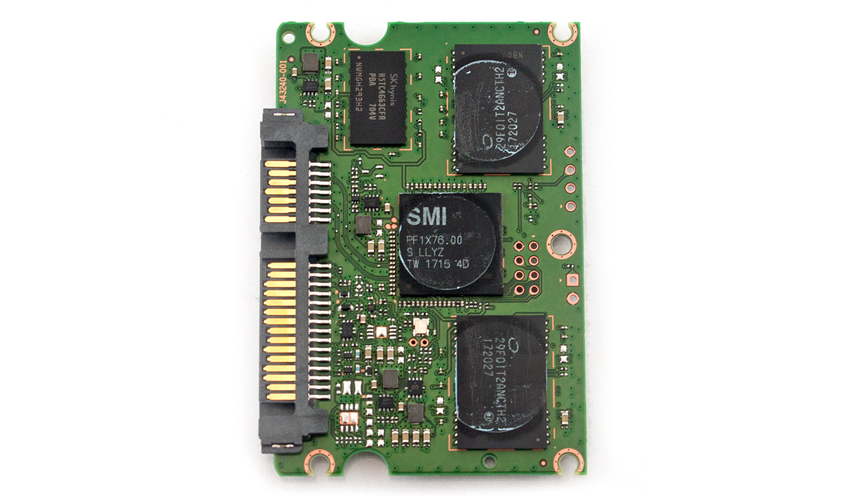 All consumer SSD benchmarks are conducted using the StorageReview HP Z640 Workstation. We compared the Intel 545S SSD to the following drives:

In our 2MB sequential benchmark, the Intel 545S gave the second best read performance with 504.42MB/s. With write performance it was closer to the bottom of the pack with 445.97MB/s

2MB random performance showed the Intel drive at the lower end of the pack in both read and write performance with 438.91MB/s and 426.06MB/s, respectively.

The purpose of our random 4k benchmark is to put more strain on the drives in terms of throughput. Under these conditions, the Intel 545S came in second in read performance with 38.39MB/s. With write performance the Intel drive came in at the bottom of the pack with 100.28MB/s but it should be kept in mind that the top performer was only at 117.78MB/s.

Looking at the IOPS performance of the same test, the Intel showed 9,829 IOPS read (the second best score) and 25,672 IOPS write. 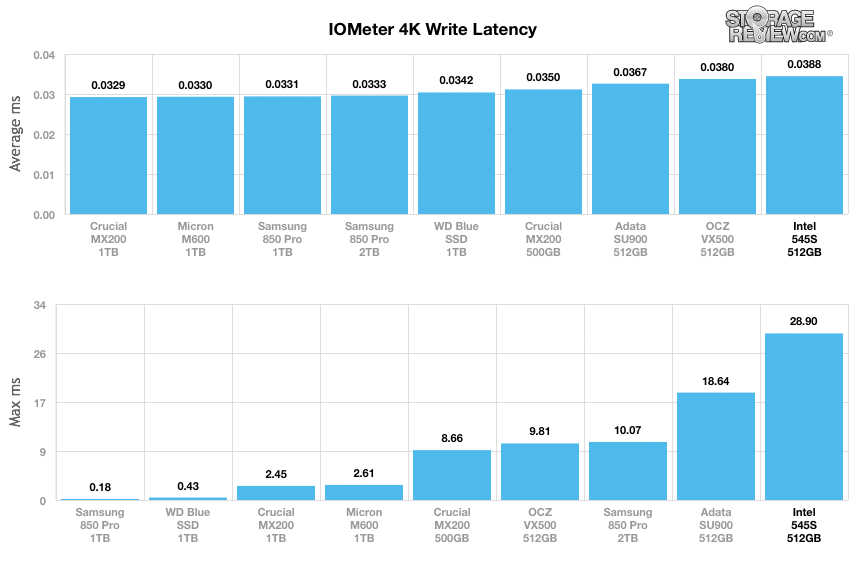 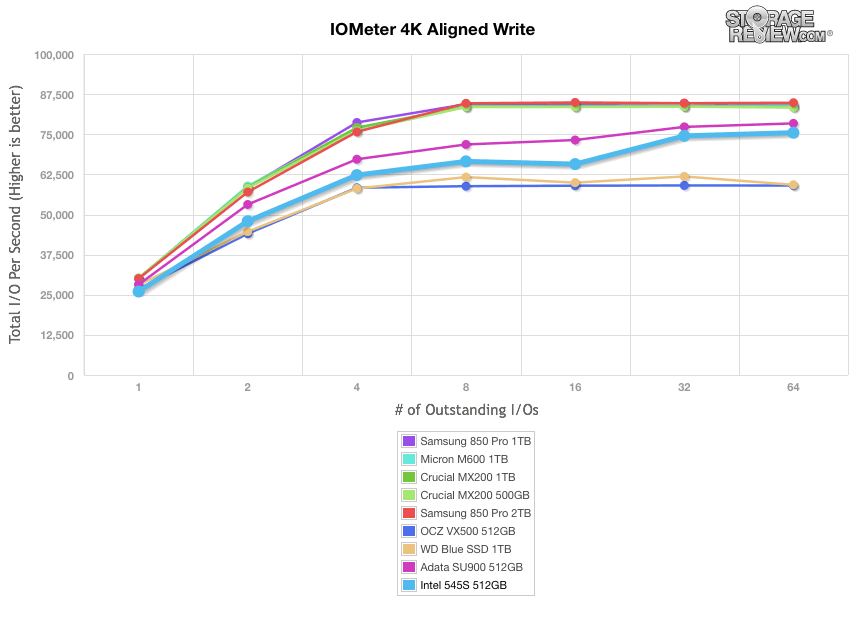 With our aligned-read benchmark the Intel drive started off with the top runners at 9,080 IOPS before falling to the bottom of the pack with 76,390 IOPS. 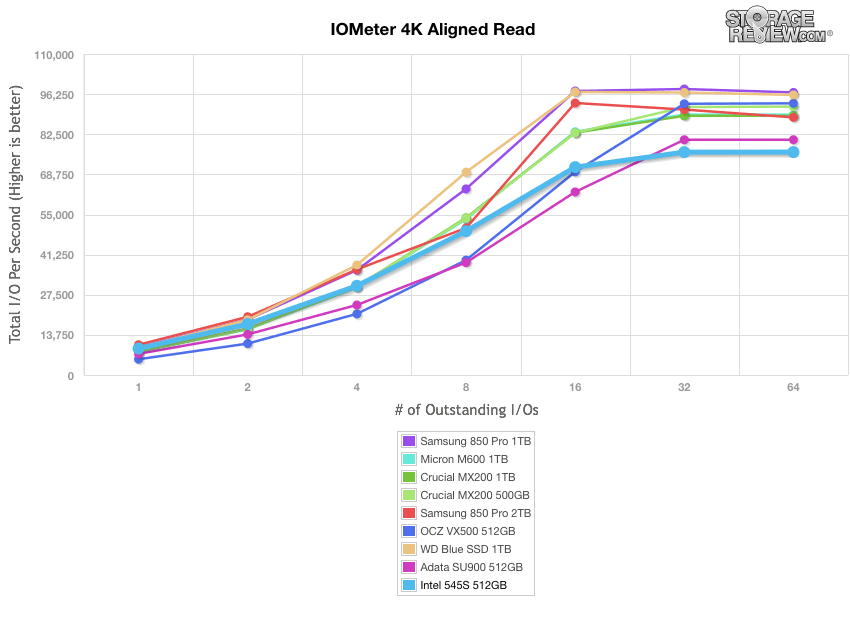 The database profile features a 67% read and 33% write workload, focusing on transfers around 8K in size. The Intel 545S landed in the middle of the pack with a peak score of 46, 534 IOPS. 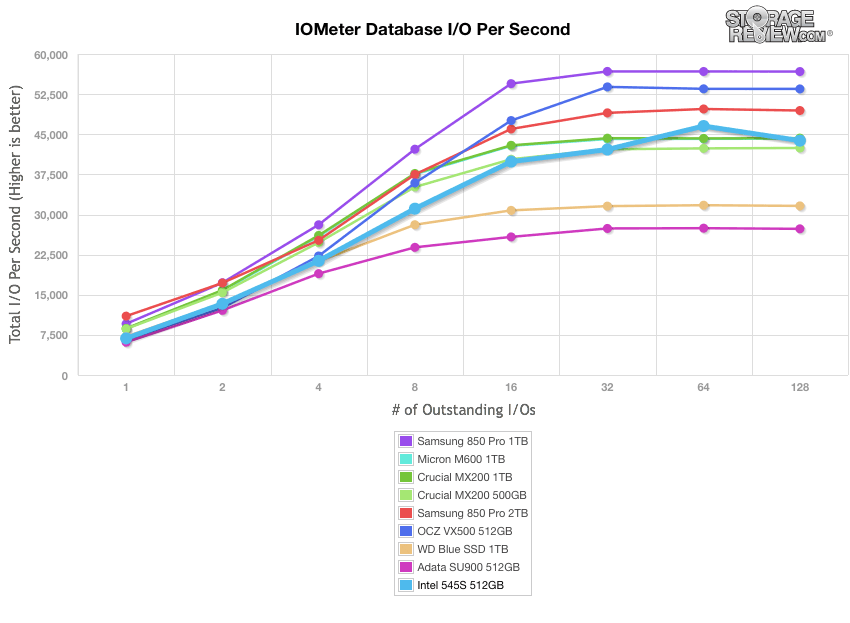 Our next benchmark is the read-only web-server profile, which uses transfer sizes ranging from 512 bytes to 512KB. Here once again, the Intel Drive placed in the middle of the pack with a peak score of 25,191 IOPS. 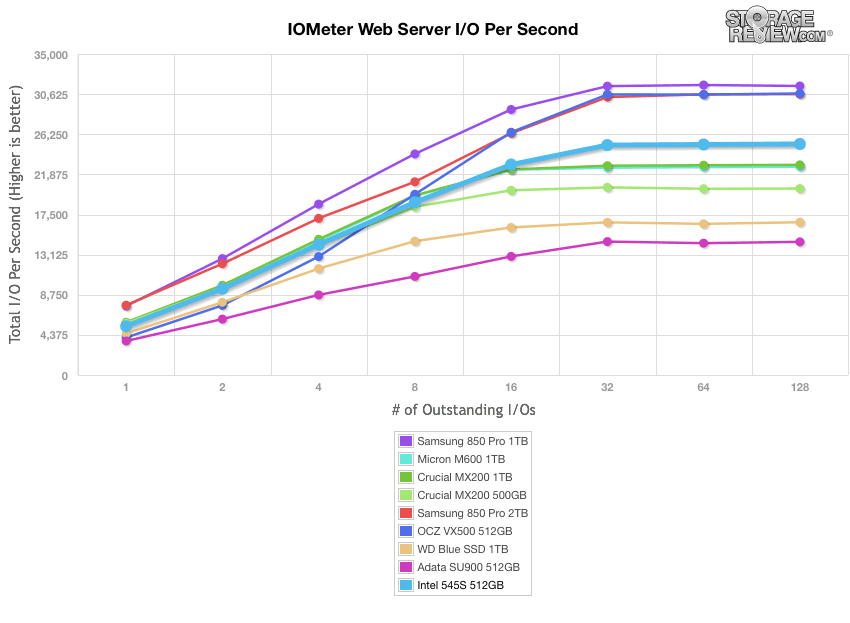 During the file-server profile, which has 80% read and 20% write workload spread out over multiple transfer sizes ranging from 512-bytes to 64KB, the Intel drive placed third overall with a peak performance of 33,183 IOPS. 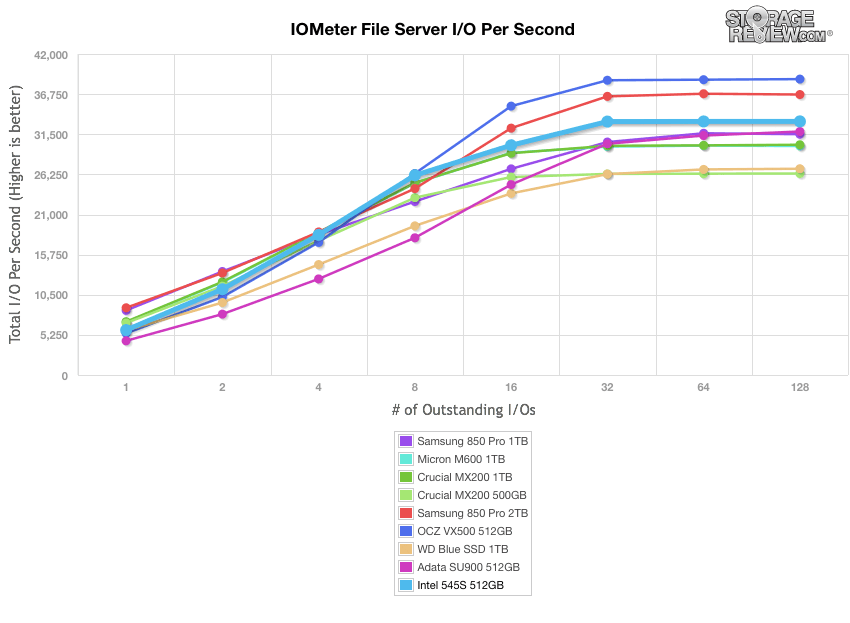 The last profile looks at workstation activity, with a 20% write and 80% read mixture using 8K transfers. The Intel drive once again came in around the middle of the pack with a peak score of 45,625 IOPS. 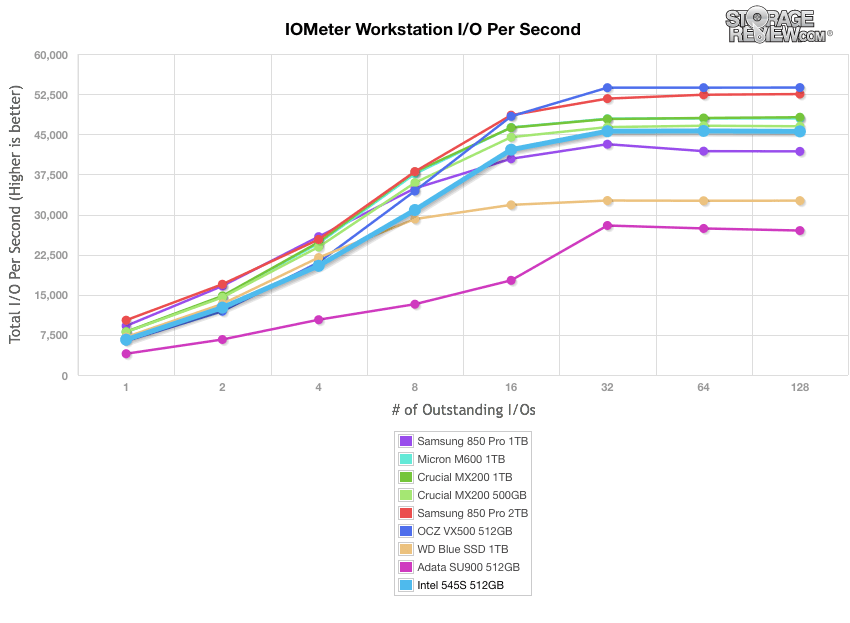 While the results of synthetic benchmarks are important in identifying the key strengths and weaknesses of a drive, performance in these tests does not always translate directly into real-world situations. To get a better idea how the Intel 545S drive will handle itself in the field, we will chart StorageMark 2010 HTPC, Productivity, and Gaming traces against comparable drives. Higher IOPS and MB/s rates with lower latency times are preferred. 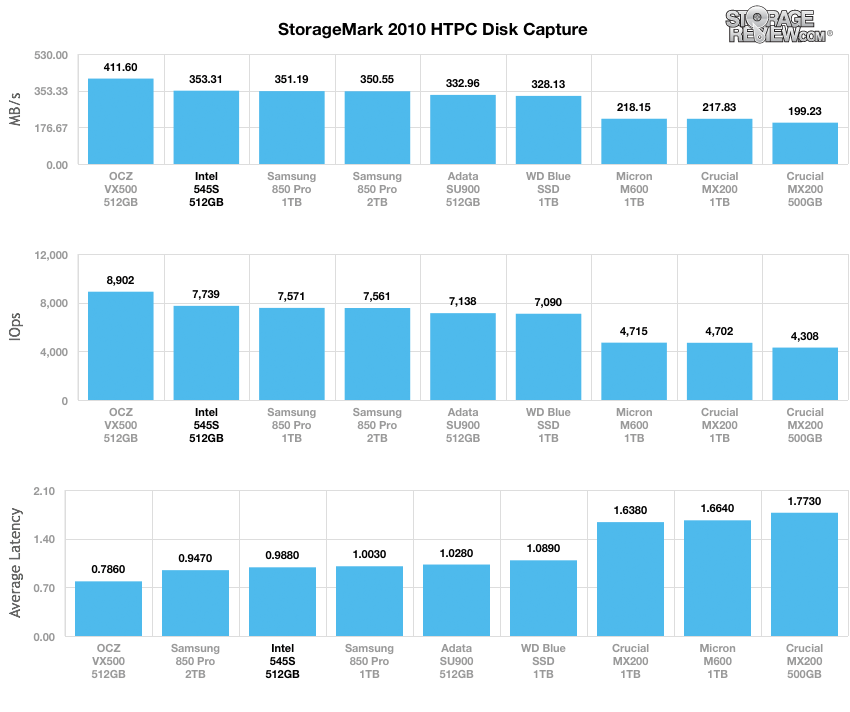 In the productivity benchmark we were unable to get a number. The drive continued to fail and lock up our test bed every time we initiated the benchmark. We contacted Intel and we were told that they were aware of the issue and would be issuing a firmware update to correct it. They didn’t believe this particular problem would crop up frequently for consumers.

In our gaming benchmark, the Intel drive once again hit good numbers with 9,246 IOPS, 486.93MB/s, and 0.819ms average latency. Overall the drive had the best latency and second best throughput losing out to the Samsung 850 Pro 1TB by a hair. 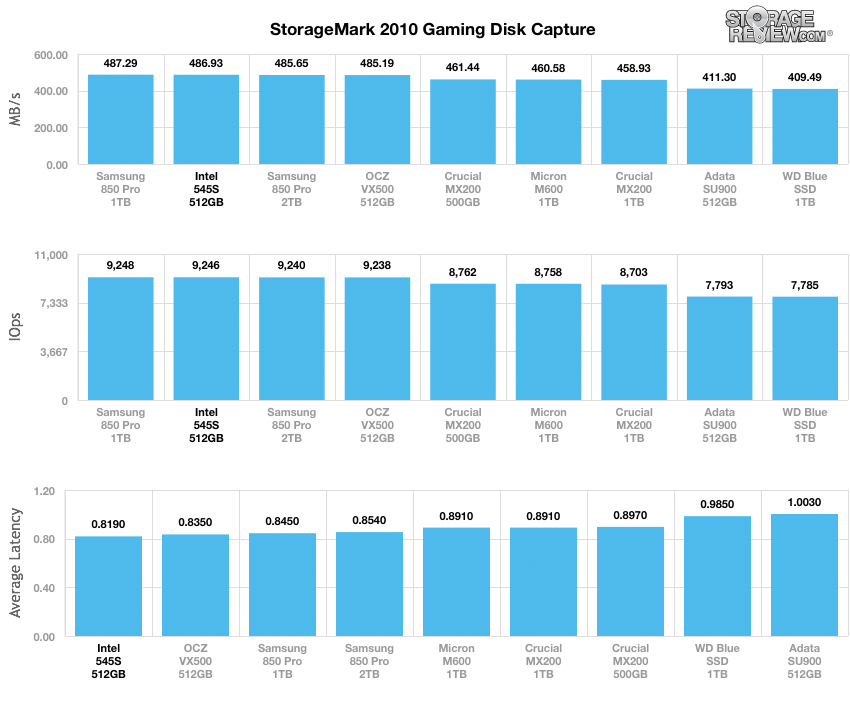 The Intel 545S is the latest client SATA SSD offered by Intel and the first to feature the company’s new 64-Layer, TLC, Intel 3D NAND. Though the drive is currently only available in a 512GB, 2.5” form factor, Intel states that it will be releasing more capacity, ranging from 128GB to 2TB, as well as a M.2 form factor version. The drive is being marketed as an HDD replacement and has a MSRP of $179 for 512GB.

For performance the drive gave an overall average performance. In our 2MB IOMeter the Intel drive gave a good sequential read performance of 504.42MB/s though the rest of the numbers in both sequential and random were near the bottom of the pack. Our 4k testing again showed promising read scores (38.39MB/s and 9,829 IOPS) but lower write scores and poor latency scores. Our mixed-server workloads saw the drive land in the middle of the pack across all the tests.

In our real-world consumer benchmarks the drive showed more performance, but also made a firmware problem very visible. In our HTPC disk capture the drive came in second and third, making it an attractive option for replacing an HDD. The gaming disk capture was also very promising having the best latency and coming in right in line with the top performer on the other measures of performance. Unfortunately, as stated, the drive failed when we were running our productivity disk capture. This happened in a fully repeatable fashion, where the only recovery of the system was a hard power cycle (pulling the power cord or holding in the power button). Windows 10 would be unable to reboot or shutdown itself, even with the drive tested as a secondary drive. Until Intel patches this bug, we can’t recommend this drive for purchase.

The Intel 545S will make a good HDD replacement for most consumers, once its firmware bug is patched.