The TYAN Transport CX GC68A-B8036 also allows for support of up to two PCIe 4.0 add-in cards via preinstalled riser cards at the back panel for a (potential) significant increase in performance compared to the last-gen model. The CX GC68A-B8036 also supports two GbE ports and a management GbE port that is dedicated to IPMI. 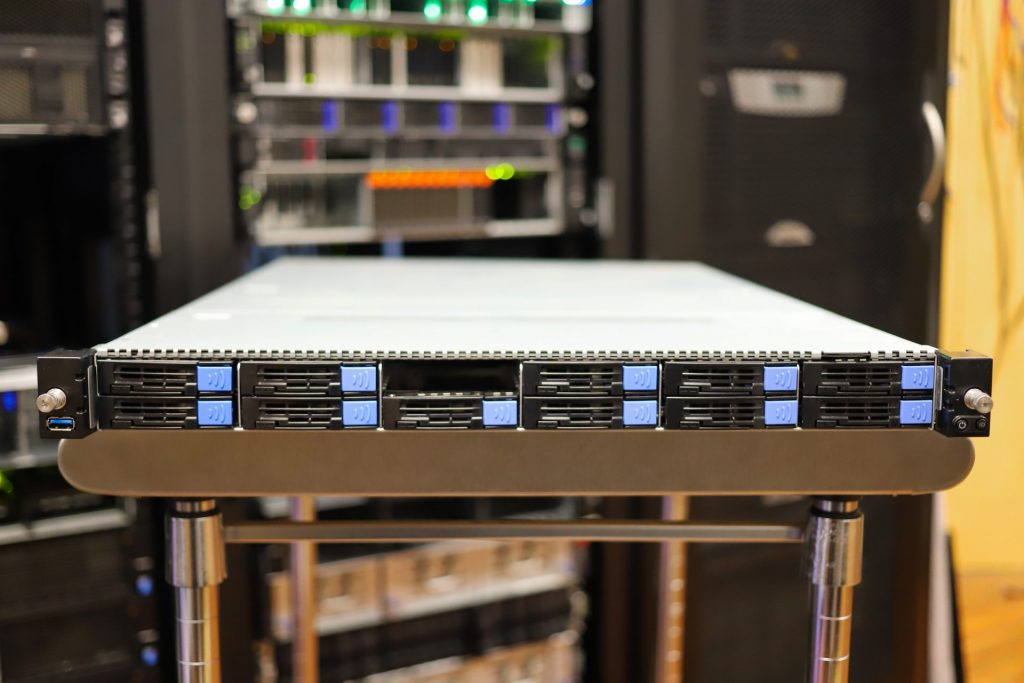 Moreover, the support for the new EPYC CPUs means TYAN was able to add sixteen DIMM slots to the server for a total of just over 4TB of LRDIMM 3DS DDR4 RAM (up to 2,048GB when using RDIMM).  Our review build includes 256GB of DDR4 3200MHz DRAM (utilizing all 16 DIMMs with 16GB sticks in each). 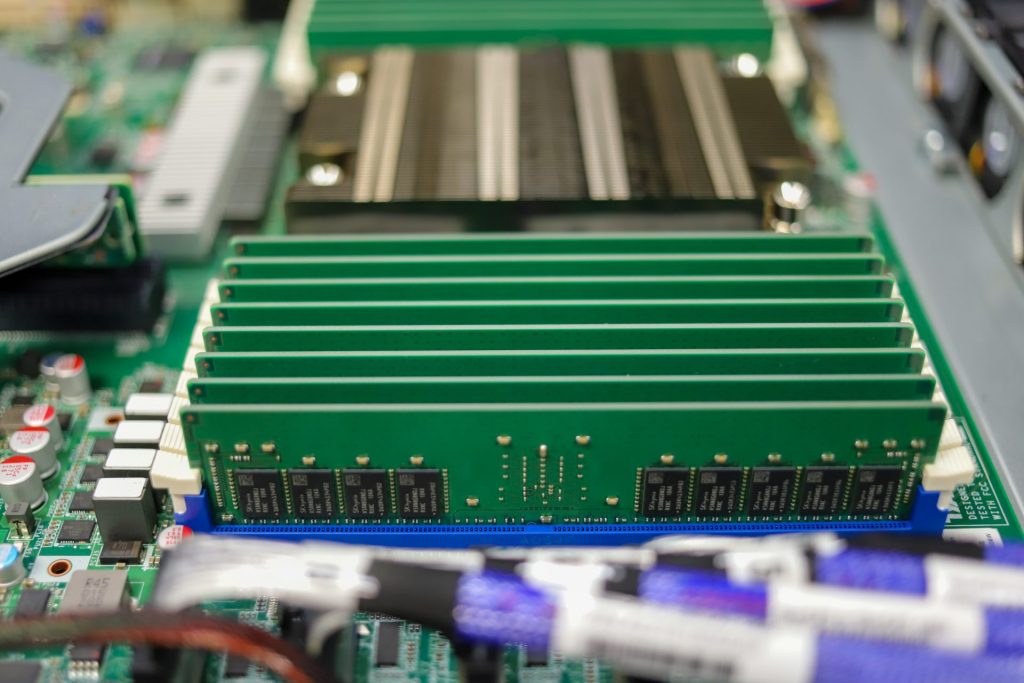 For storage, the server can house up to twelve NVMe U.2 SSDs (or a blend of NVMe and SATA drives) via its hot-swappable tool-less drive bays. The CX GC68A-B8036 is equipped with two internal NVMe/SATA M.2 slots for boot drives. For input, it comes equipped with five USB 3.1 Gen1 ports, including one with Type-A connectivity, and the usual VGA and COM ports.

We were shipped with the B8036G68AE12HR model, which handles both SATA and NVMe drives. Our test build includes an AMD EPYC Gen3 7763 processor and eightIntel P5510 7.68TB Gen4 SSDs.

The Transport CX GC68A-B8036 is a 1U server that uses TYAN’s latest chassis model, offering a comprehensive structure and a rugged, quality mechanical enclosure. It’s a fairly standard server at 43mm in height, just over 438mm in width, and 680mm in depth.

On the sides of the front panel is the USB 3.0 port (left), Power Button with green & red LED (right), and ID button with a blue LED (right). The drive trays are located in between.

Our specific model is the B8036G68AE12HR. This is a single-socket AMD EPYC 7002/7003 barebone platform that features twelve tool-less, hot-swappable 2.5” drive trays that support eight NVMe U.2 devices and four NVMe/SATA 6G/SAS12G devices. Each drive tray has a status (red) and activity (green) LED, which indicates whether a drive is present (activity/no activity, or if it’s being identified, rebuilt, or has failed. Turning the TYAN server to the back panel (starting from the left side) we see the dual 850W (80+ Platinum) PSUs, LAN1 (dedicated for IPMI), and two USB 3.0 ports, the VGA and Serial ports, and the other two LAN ports. Next to these are the OCP card area and expansion slots (Half-height / Half-length PCI-E Gen.4 x16 card w/ tall bracket x2). 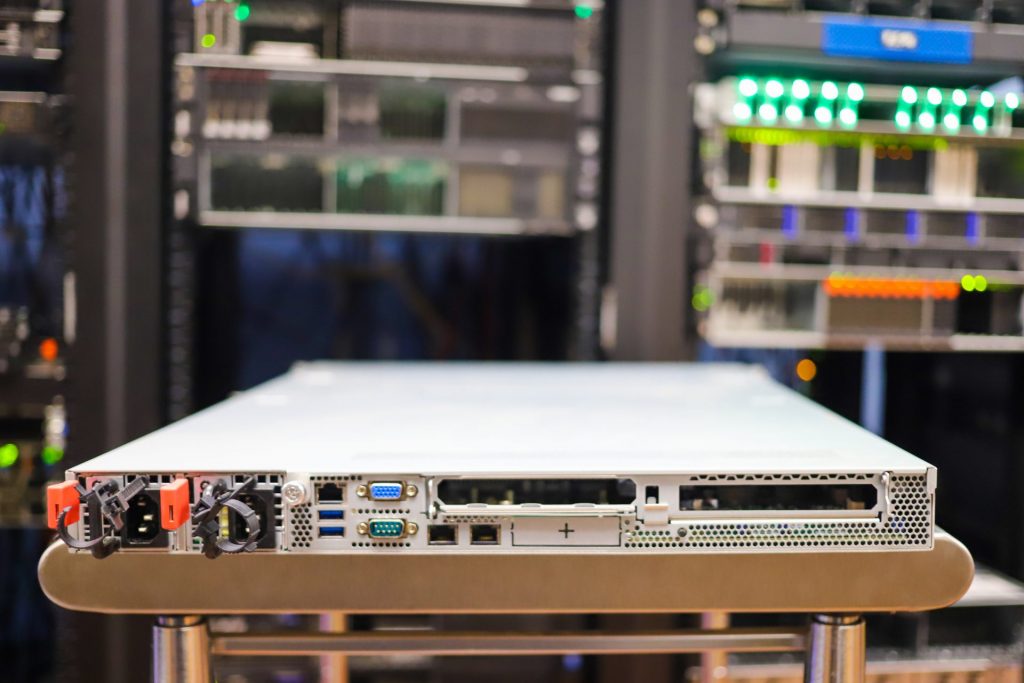 To remove the server lid, simply slide the cover a bit forward and then lift up; though you will need to use a screwdriver to open up the back panel of the server. 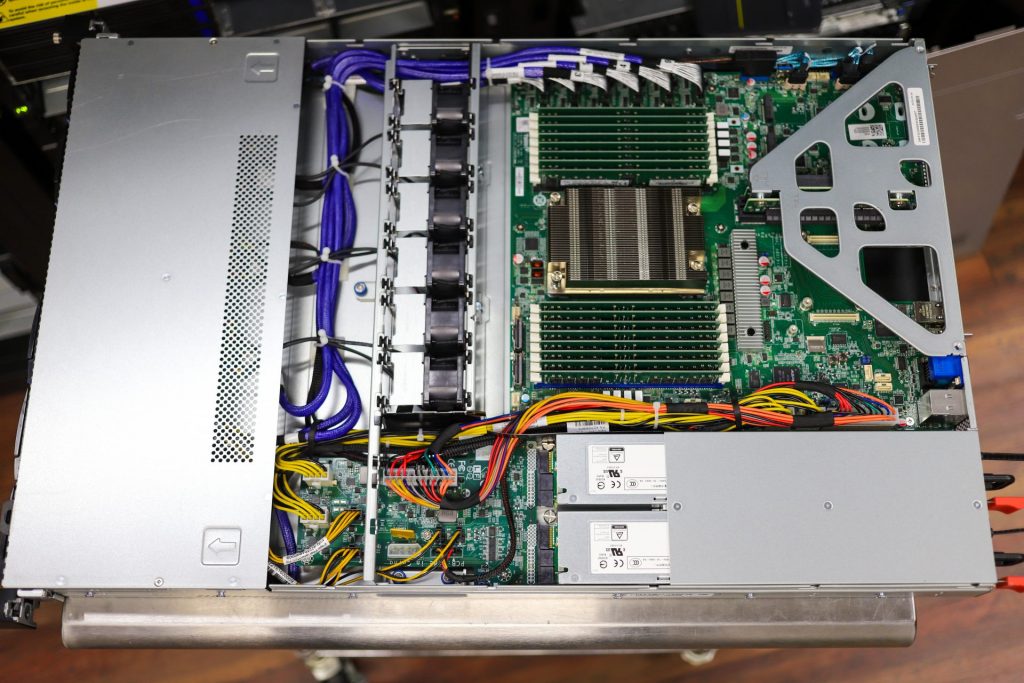 Once removed, you will that all the components are set up through the middle of the server, nicely spaced out to allow for effective airflow. Next to the fans is the M1631G68-D-PDB power distribution board. The fans themselves keep the air circulating around the single socket AMD processor, which is surrounded by eight DDR4 DIMMS, and the rest of the S8036 motherboard. 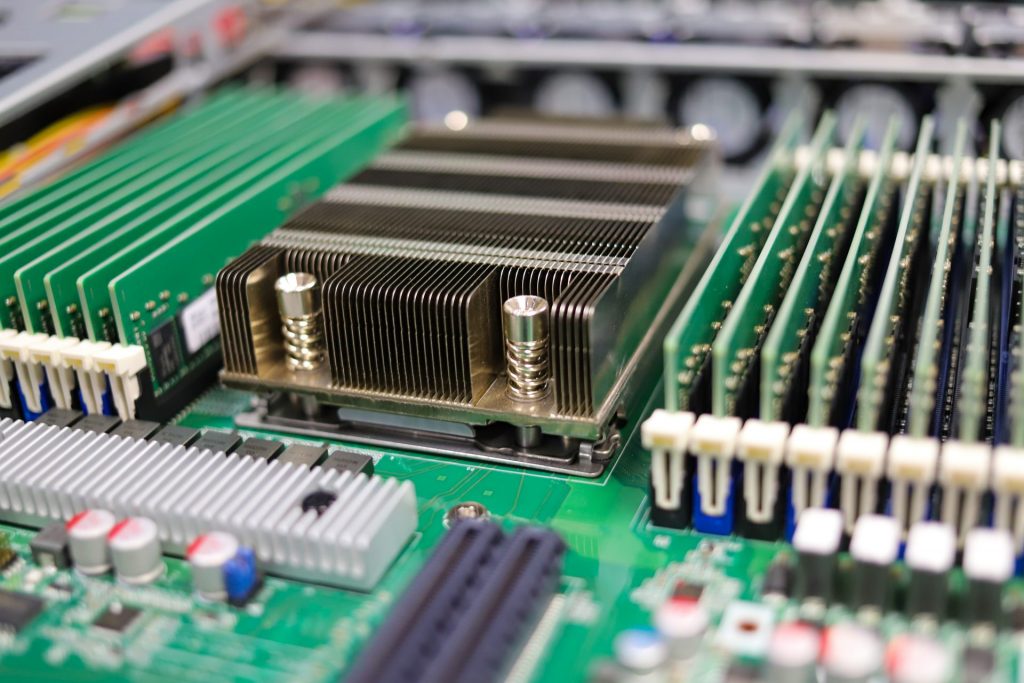 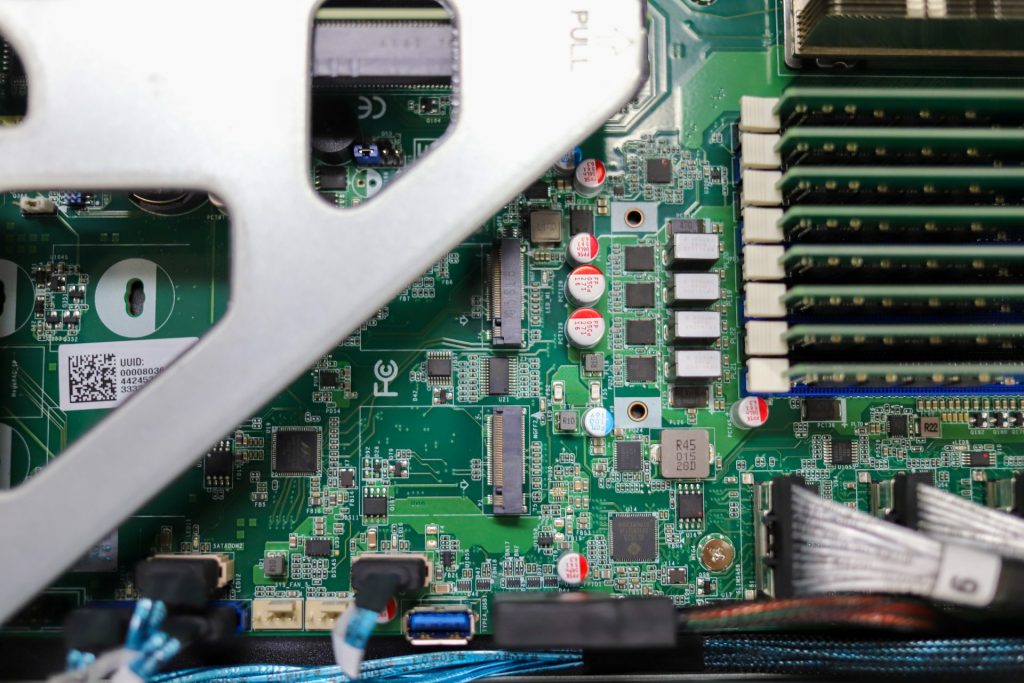 We configured our TYAN Transport CX GC68A-B8036 with the following components:

We measured an aggregate latency of just 1ms through eight VMs from the Transport CX GC68A-B8036. Average latency in Sysbench was also a bit disappointing with an aggregate score of 11.65ms, with the eight VMs ranging from 11.61ms to 11.77ms.

Wrapping up Sysbench, the worst-case Sysbench 99th percentile numbers ranged from 22.04ms to 22.82ms for an aggregate of 22.47ms.

First up is the 4K random read test, where the TYAN Transport CX GC68A-B8036 showed disappointing results. Here, it posted a peak of just 805,037 IOPS with a latency of 329.2ms. Each one of the installed drives are capable of reaching 800K IOPS; however, inside this TYAN server, they only saw roughly 100K IOPS each.

In the 64K sequential write test, the had its highest throughput was 15.4GB/s or 245,529 IOPS with a 932.7µs latency before suffering from a small spike in performance at the very end.

In VDI FC Monday Login, the TYAN server was below 100µs until around 180K IOPS mark, where it eventually peaked at 308,245 IOPS with a latency of 275.5µs. The performance showed some spikes at the end of this test as well.

In the VDI LC Initial Login, latency started below 100µs and continued to be stable up until the IOPS peaked at 224K, where it suddenly took a huge spike in performance. It ended up with 171,071 IOPS at 276µs.

The last test is VDI LC Monday Login, where the Transport CX GC68A-B8036 again started with a lower latency before suffering from a huge spike around the 175K mark. The highest IOPS was 285,692 at 326.5µs.

The Tyan Transport CX GC68A-B8036 is purpose-built for cloud storage server use cases, and at times, it fills this role well. This 1U, single-socket server is based on AMD’s EPYC 7003/7002 processors and supports up to twelve NVMe U.2 SSDs (or a blend of NVMe and SATA drives) via its hot-swappable tool-less drive bays. It uses an efficient and easy-to-service design like the most recent TYAN servers and comes with five USB 3.1 Gen.1 ports (one of which is Type-A) as well as the usual buttons and status LEDs. For performance testing, we ran the Transport CX GC68A-B803 through our Application Workload Analysis, including SQL Server latency and Sysbench, and VDBench. In SQL Server latency, it returned an aggregate average latency of just 1ms. In Sysbench, we recorded an aggregate 21,967.23 TPS, a 11.65ms average latency, and a 22.47ms latency in the worst-case 99th percentile test.

For our synthetic testing, we saw a mixed performance from the eight Gen4 SSDs we installed. Bandwidth figures roughly aligned with Gen4 figures, but IOPS was drastically slower than expected. We observed a maximum of 1.10 million IOPS in SQL workload, 1.08 million in SQL 90-10, and 1.036 million in SQL 80-20. Meanwhile, in our Oracle tests we saw 957K IOPS in Oracle workload, 955K in Oracle 90-10, and 932K in Oracle 80-20.

Overall, the synthetic benchmark results CX GC68A-B803 were disappointing in a few spots. Unfortunately this likely has to do with the platform itself, we’ve seen similar behavior out of other AMD platforms. Though the high bandwidth in 64K sequential reads was in the Gen4 performance range, its 4K random read was poor at roughly 800K IOPS. This translates to around 100K IOPS per drive; however, each of the Intel P5510 SSDs is capable of 800K IOPS themselves. Thankfully, application workloads in VMware didn’t have the same issue.

Overall the TYAN Transport CX GC68A-B8036 offers datacenters a very dense platform that’s geared more toward storage density than compute power. Most application workloads should be just fine, a PoC will shake out any issues ahead of time.