The ZBook Fury 17 G8 is HP’s flagship mobile workstation. This exceptionally powerful notebook features Intel Xeon CPUs, ECC memory, Nvidia RTX GPUs, color-accurate screens for professional work, and up to four M.2 PCIe storage drives. We found it to be very well made and suitable for the most demanding workloads.

The ZBook Fury 17 G8 is HP’s flagship mobile workstation. This exceptionally powerful notebook features Intel Xeon CPUs, ECC memory, Nvidia RTX GPUs, color-accurate screens for professional work, and up to four M.2 PCIe storage drives. We found it to be very well made and suitable for the most demanding workloads. 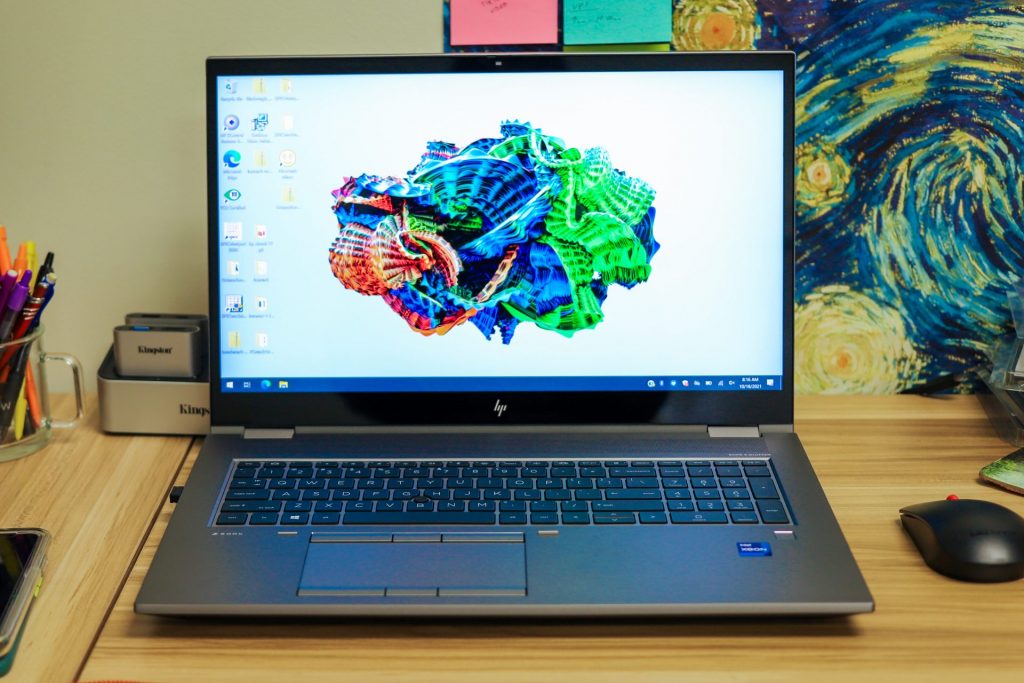 As expected for a top-tier mobile workstation, this ZBook delivers desktop-like performance. It offers 45-watt Intel Tiger Lake H-class processors, both Core and Xeon, with up to eight cores and vPro remote management support. The memory ceiling is 128GB via four slots, with ECC available for Xeon chips. Dedicated GPU options climb to the 16GB Nvidia RTX A5000. Storage-wise, it fits up to four internal M.2 PCIe storage drives.

The Dell Precision 7760 (see our review of the similar Precision 7560) and the Lenovo ThinkPad P17 Gen 2 (likewise with the ThinkPad P15 Gen 2) are the ZBook Fury 17 G8’s primary competitors. They offer similar specifications, though the ThinkPad tops out with three M.2 drives.

For the nitty-gritty, the ZBook Fury 17 G8’s full specifications are below.

Built to last is a good way to describe the ZBook Fury 17 G8. Its gunmetal aluminum and magnesium construction are solid and unbending. It’s classy yet professional. 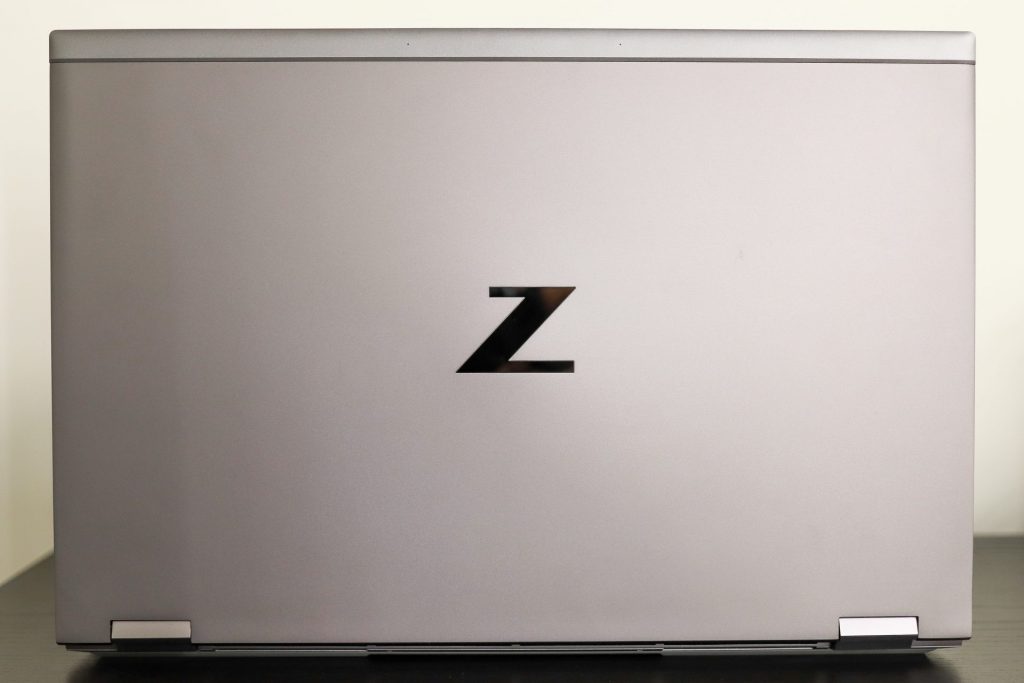 The ZBook pushes the limits of notebook portability at 15.7 by 10.5 by 1.06 inches (WDH). Though it’s not necessarily wider or deeper than a typical consumer 17.3-inch notebook, it is thicker to accommodate a larger cooling system and upgradeable components. Its starting weight is 6.1 pounds; our review unit came in at 6.94 pounds.

The touch screen on our review model has a fine UHD resolution (3840×2160), an anti-glare surface, and wide viewing angles. It looks vibrant with its high 550-nit brightness and 100% DCI-P3 color coverage ratings. For maximum color accuracy, HP also offers a UHD DreamColor HDR-400 screen with the same brightness rating, though it lacks touch. The base FHD screen (1920×1080) is rated for just 300 nits.

The full-size keyboard is comfortable and tactile. Its white backlighting contrasts nicely with the black keys. At its center is a rubber pointing stick, something only seen on a top-shelf business laptop like this.

Both the pointing stick and the nicely-sized touchpad have three buttons each; the middle click is especially convenient for professional apps. They have a reassuringly tactile response. 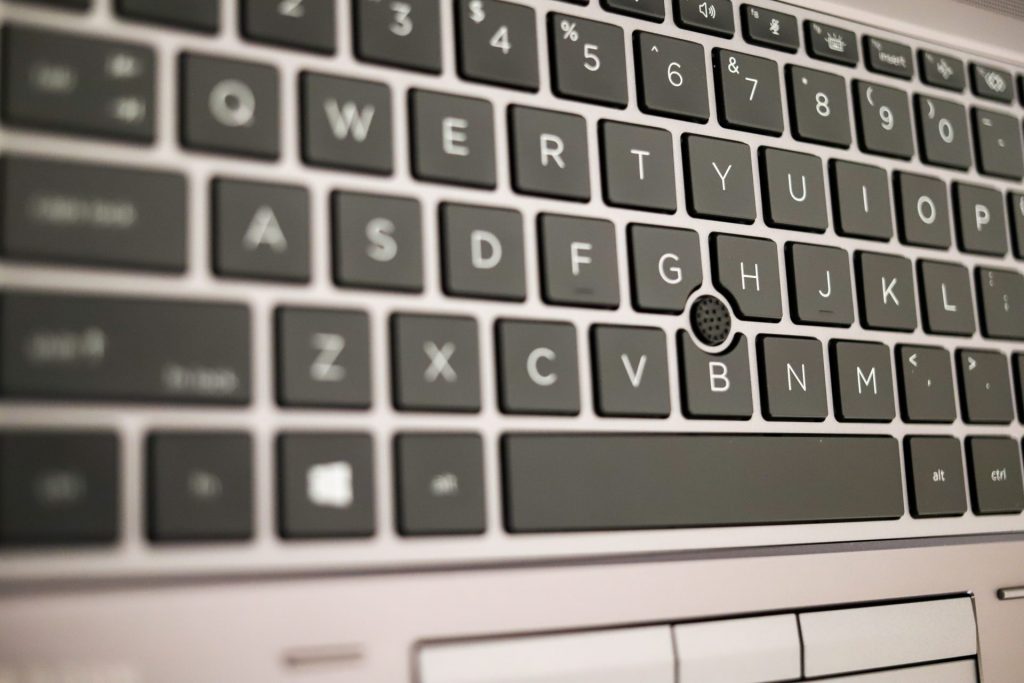 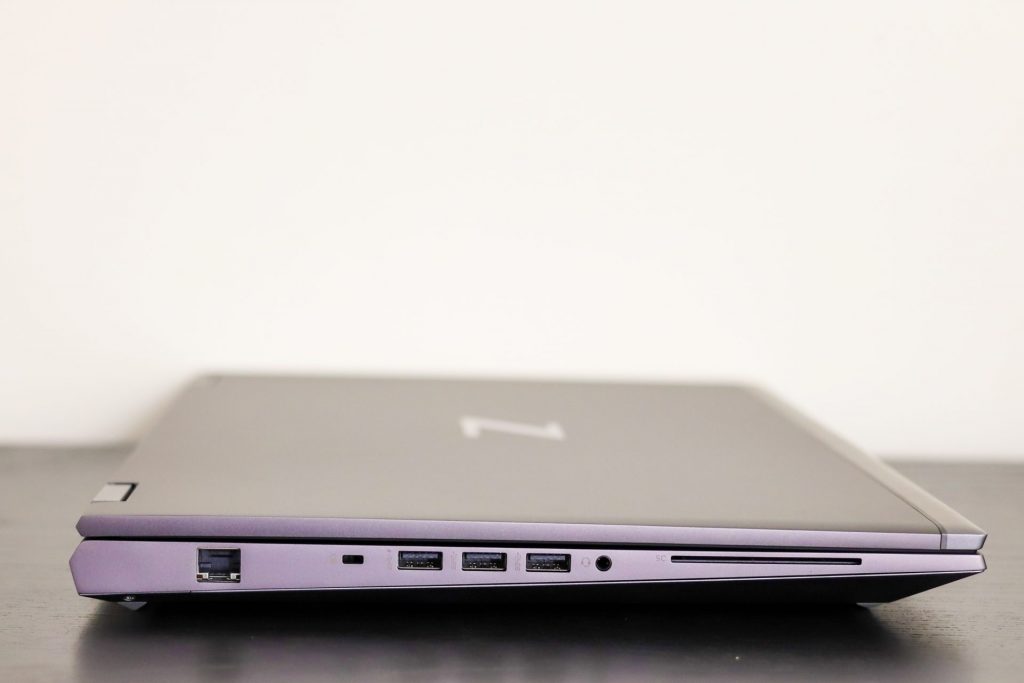 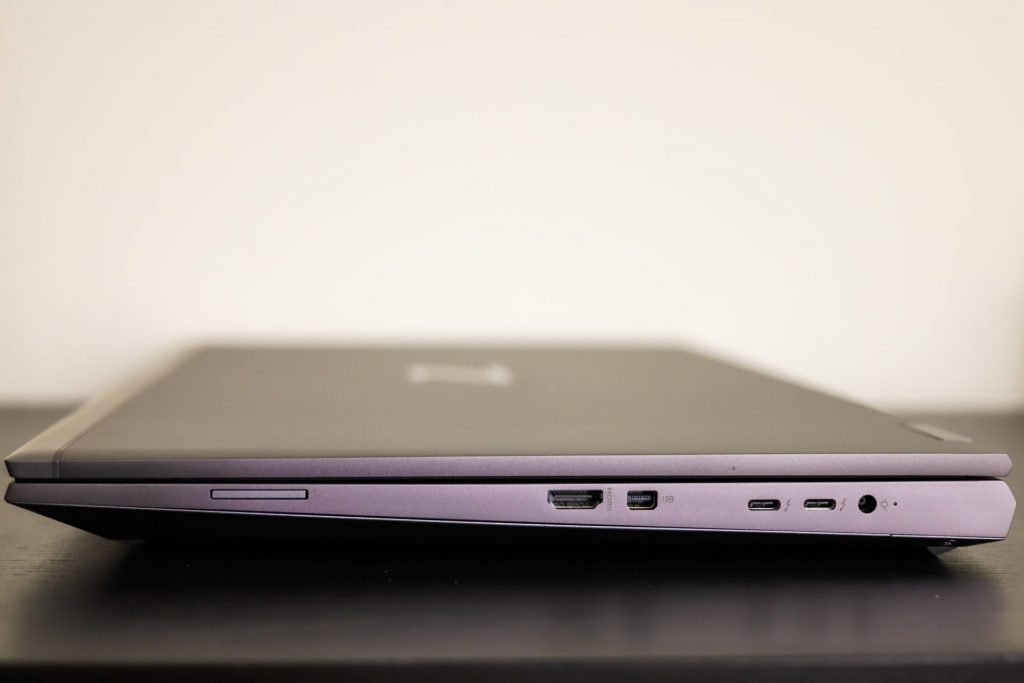 Meanwhile, the right edge has a full-size SD card reader, an HDMI 2.0b video output, mini-DisplayPort 1.4, a pair of Thunderbolt 4 (USB Type-C) ports, and the AC power connector. Inside is an Intel AX201 wireless card supporting Wi-Fi 6 and Bluetooth 5. Mobile broadband is optional. (It’s not present in our review unit.) 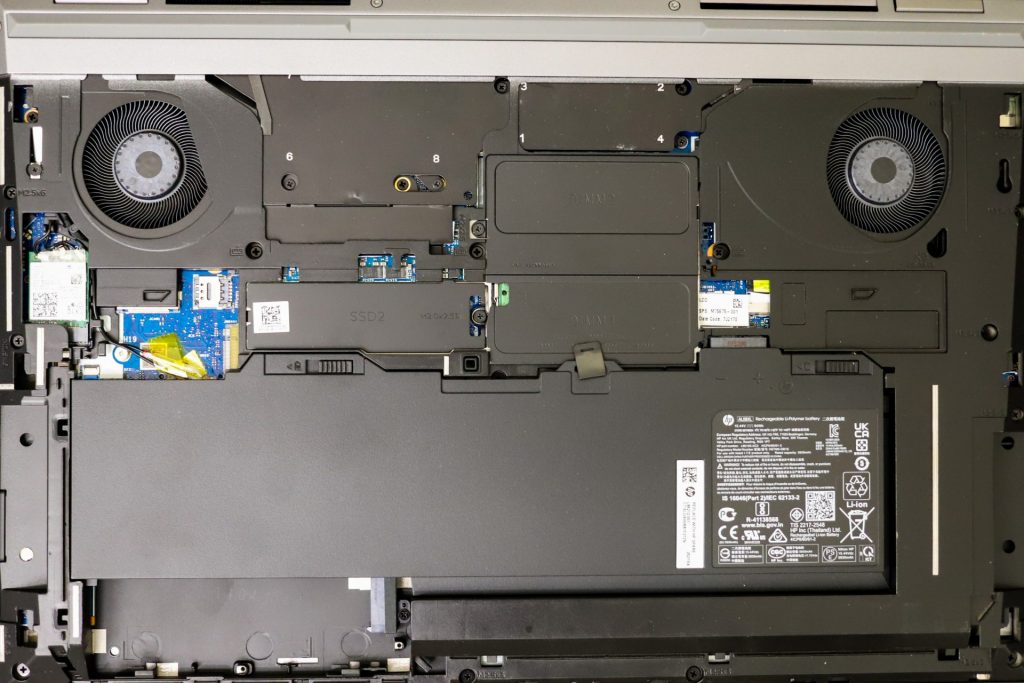 Upgrading the ZBook’s memory and storage couldn’t be easier. Sliding the security switch on the bottom of the chassis reveals one screw, which is all that must be removed for the cover to come free. Battery removal is surprisingly simple – just slide its unlock switch. Removing the battery reveals the third and fourth M.2 Type-2280 SSD slots. A 2.5-inch drive, if equipped, will reside in this same location. (It’s either-or.) 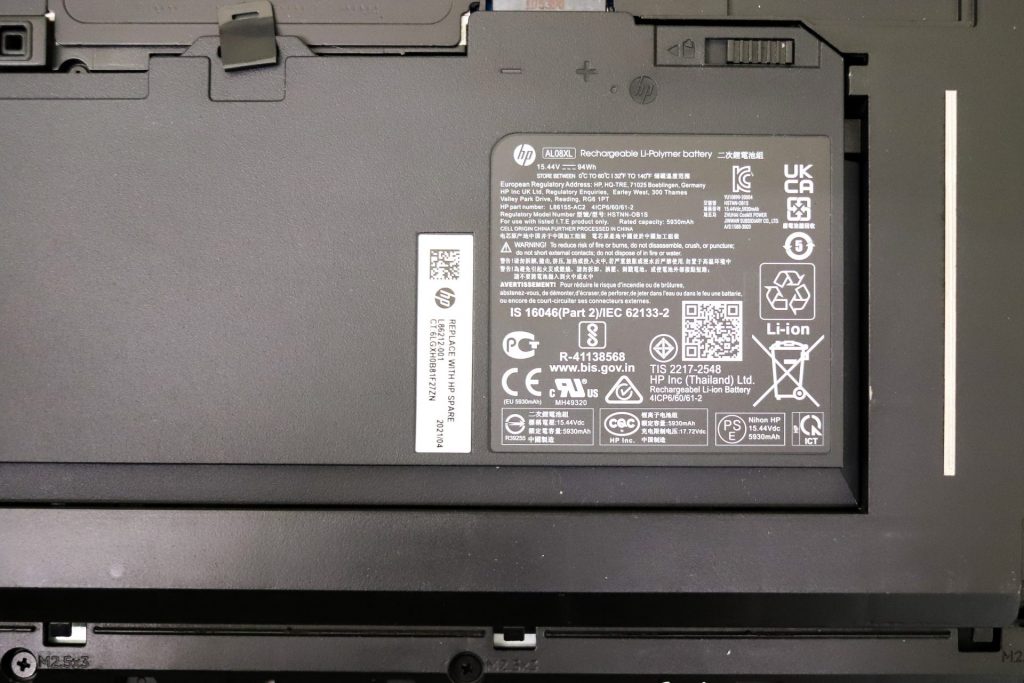 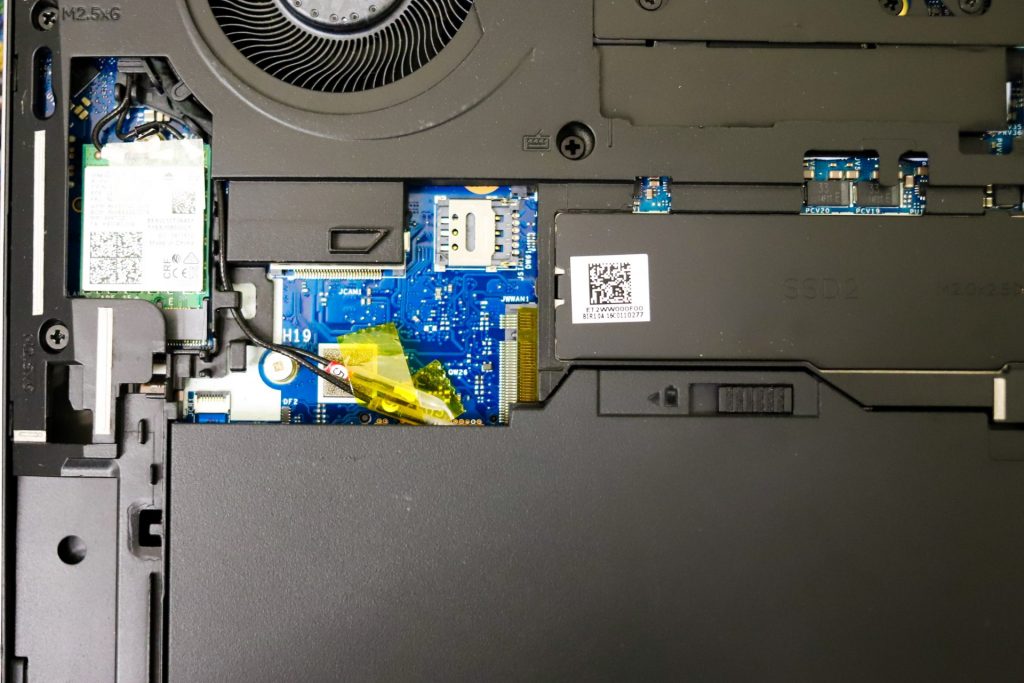 The second M.2 slot and two of the four DDR4 SoDIMM slots are also accessible under the bottom cover. Getting to the primary M.2 SSD and the other two SoDIMM slots requires removing the keyboard. HP provides well-written service manuals should you need to do that. 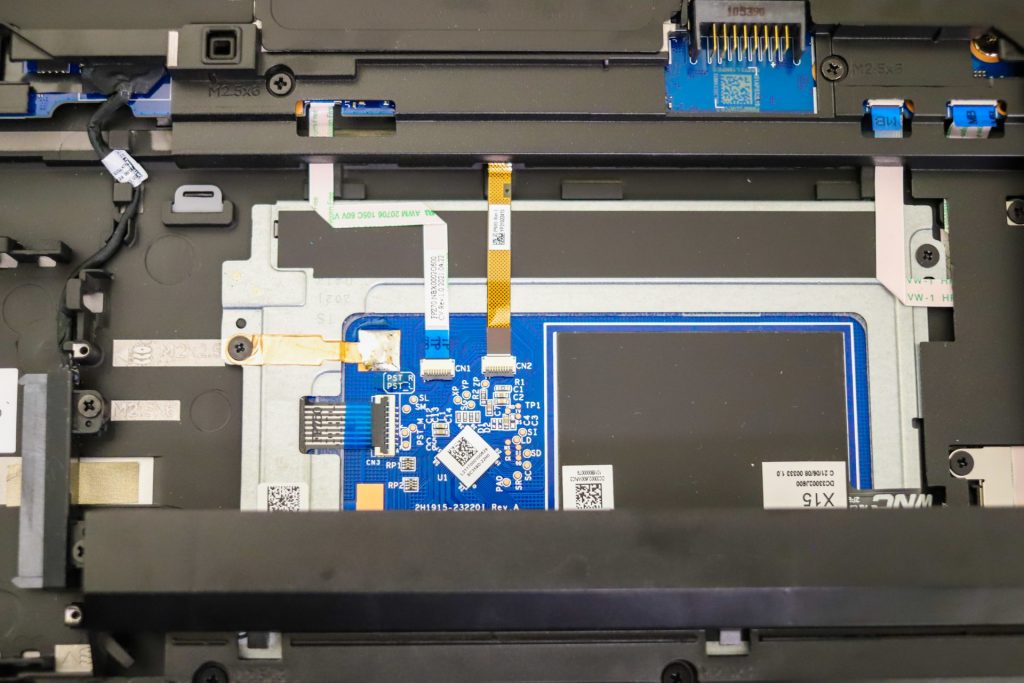 Our ZBook Fury 17 G8 is very well equipped with the following components:

Current prices in HP’s online configurator put our review unit just shy of $7,000, though that’s without any fleet discounts or sales. Either way, expect to spend more than the $2,118 the base model commands – it doesn’t even have a dedicated graphics card (and thus doesn’t qualify as a mobile workstation in our view). A $2,959 preconfigured model on HP’s site is more realistically configured with a Core i7-11800H CPU, a 4GB RTX A2000 GPU, 32GB of RAM, a 512GB SSD, and the DreamColor screen. Expect to spend much more, however, if you need a higher-end GPU.

As a minor note, our test unit has a PCIe Gen 3 SSD, not a newer Gen 4 drive, and I didn’t see a Gen 4 option in HP’s configurator at this writing.

Let’s get testing. Depending on the test, the ZBook Fury 17 G8 will be compared to the Dell Precision 7560 for context. It’s one tier down when it comes to components, equipped with an eight-core Core i7-11850H and an 8GB Nvidia RTX A4000. It has a UHD screen resolution like our ZBook, so its numbers in the graphical benchmarks will be comparable. 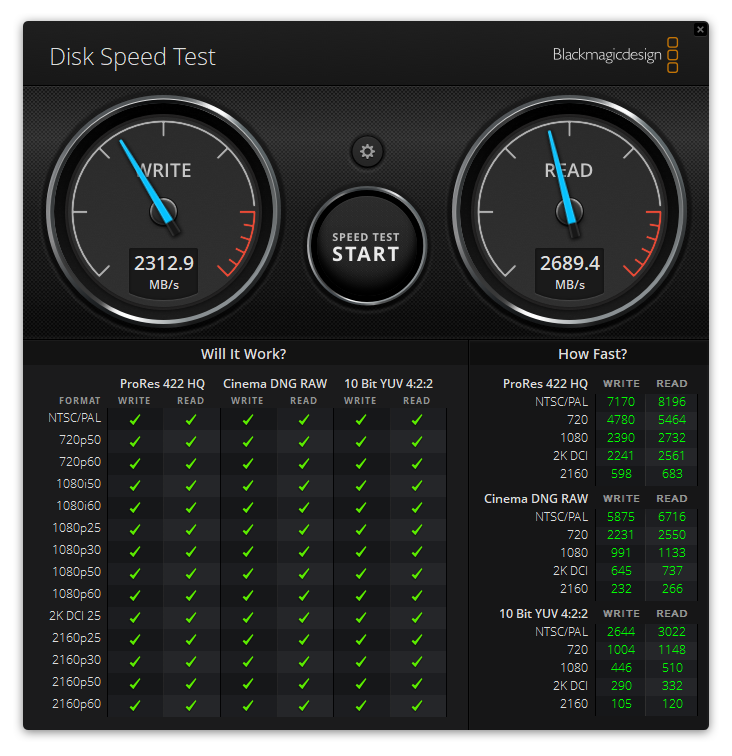 The ZBook Fury 17 G8 predictably outperformed the Precision 7560 here, thanks to its stronger RTX A5000 GPU.

The ZBook Fury 17 G8 continued to perform well and went par for the course with the Precision 7560. Overall, this testing doesn’t rely on the GPU as much.

Next up is the Environmental Systems Research Institute (Esri) benchmark. Esri is a supplier of Geographic Information System (GIS) software. Esri’s Performance Team designed their PerfTool add-in scripts to automatically launch the ArcGIS Pro. This application uses a “ZoomToBookmarks” function to browse various predefined bookmarks and create a log file with all the key data points required to predict the user experience. The script automatically loops the bookmarks three times to account for caching (memory and disk cache). In other words, this benchmark simulates heavy graphical use that one might see through Esri’s ArcGIS Pro software. This testing heavily involves the GPU, so the ZBook Fury 17 G8 was able to pull ahead of the Precision 7560.

LuxMark is an OpenCL cross-platform benchmarking tool from those who maintain the open-source 3D rending engine, LuxRender. This tool looks at GPU performance in the areas of 3D modeling, lighting, and video work. For this review, we used the newest version, v4alpha0. In LuxMark, higher is better when it comes to the score. Though the ZBook Fury 17 G8 pulled only slightly ahead of the Precision 7560 here, it nonetheless scored well in both tests.

Last, we look OctaneBench, a benchmarking utility for OctaneRender, which is another 3D renderer with RTX support that is similar to V-Ray. The ZBook Fury 17 G8 completed this with a score of 358.6, on par with the Precision 7560’s 341.6.

This thermal image shows the ZBook Fury 17 G8 doing well; most of its chassis remained at a reasonable temperature under load. Only near the exhaust ports at the top-right did it reach peak temperature, a place where your fingers wouldn’t be. The fan noise under load isn’t too obtrusive. All the air goes out the notebook’s back edge. 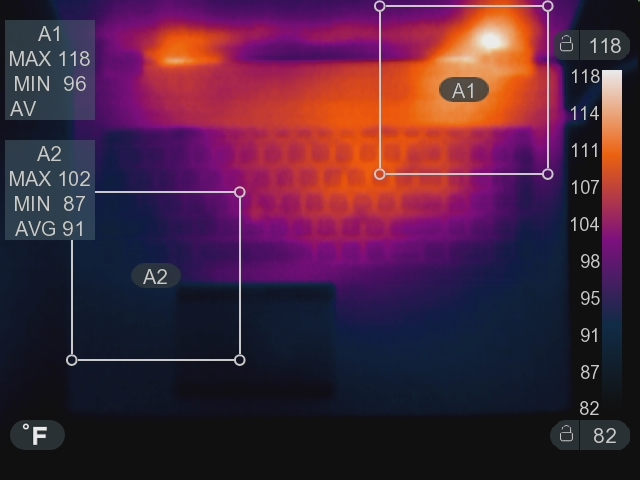 The HP ZBook Fury 17 G8 is an admirable notebook for high-end professional work. It performed as well as expected in our testing the way our review unit was configured, running relatively cool and quiet in the process. Its metal chassis is well made and includes top-notch input devices and connectivity.

Most impressive is this ZBook’s easy upgradeability and its ability to fit up to four internal M.2 drives. This laptop has few downsides besides its price; the preconfigured models seem to offer the best value. Overall, the ZBook Fury 17 G8 earns our recommendation as a great high-power workstation.