The TYAN Transport HX TN83-B8251 is a PCIe Gen4-compatible server designed for high-performance computing and GPGPU (that is, general-purpose computing on graphics processing units) environments. Though it resides inside 2U chassis, this server is designed to be pretty flexible from a storage and GPU standpoint. Because this is also an AMD-based system, it can support PCIe 4.0 components, though only in slots at the back of the server.

The TYAN Transport HX TN83-B8251 is a PCIe Gen4-compatible server designed for high-performance computing and GPGPU (that is, general-purpose computing on graphics processing units) environments. Though it resides inside 2U chassis, this server is designed to be pretty flexible from a storage and GPU standpoint. Because this is also an AMD-based system, it can support PCIe 4.0 components, though only in slots at the back of the server. 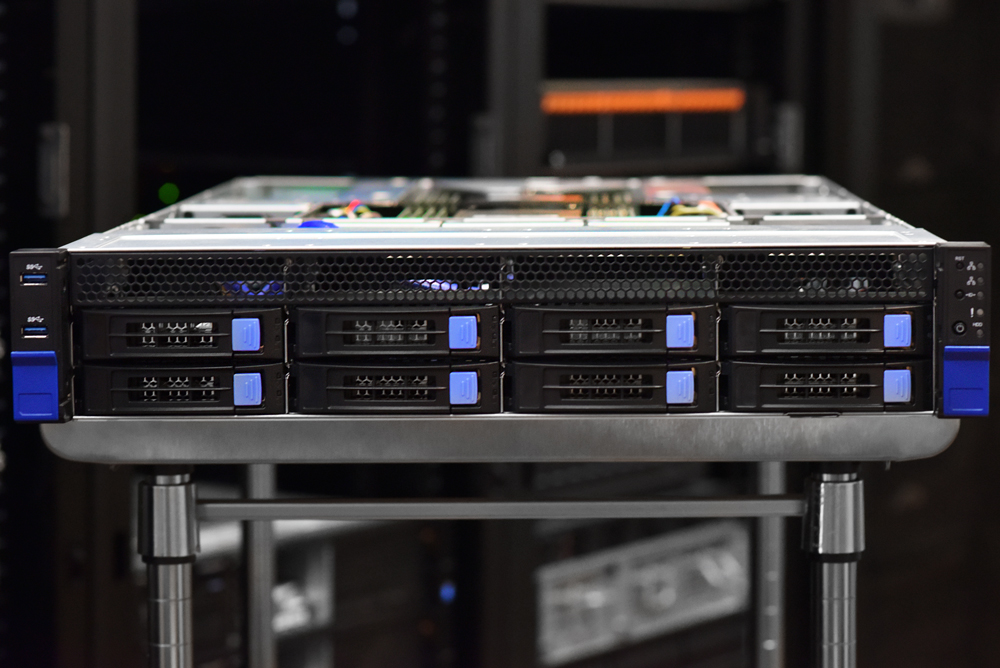 The TN83-B8251 is a unique server.  Though it features multi-GPU support, it has a limited range of CPU offerings available due to its restrictions in system cooling. As a result, users will only have CPUs with lower thermal design power to choose from. The TN83-B8251 supports dual-socket AMD EPYC 7002 CPUs, has eight DIMM slots available per CPU for a possible total of 2TB DDR4 RAM (ECC RDIMM/RDIMM 3DS/LRDIMM/LRDIMM 3DS 3200), two 10GbE ports, and a GbE port that is dedicated for IPMI. It also comes equipped with five USB 3.1 Gen1 ports, including one with Type-A connectivity.

We were shipped with an eight 3.5-inch bay configuration, which houses both SATA and NVMe drives. Our build includes 512GB of DDR4 3200MHz DRAM (utilizing all 16 DIMMs with 32GB sticks in each), dual AMD EPYC 7F32 8-Core Processors, and 4 of the Micron 9300 NVMe SSDs that we test in our other platforms.

The TYAN Transport HX TN83-B8251 has a really interesting and unique build. So, let’s get right into it the exterior functionality. On the left side of the server are a couple of USB 3.0 ports, while the status LED lights and power button reside on the right. 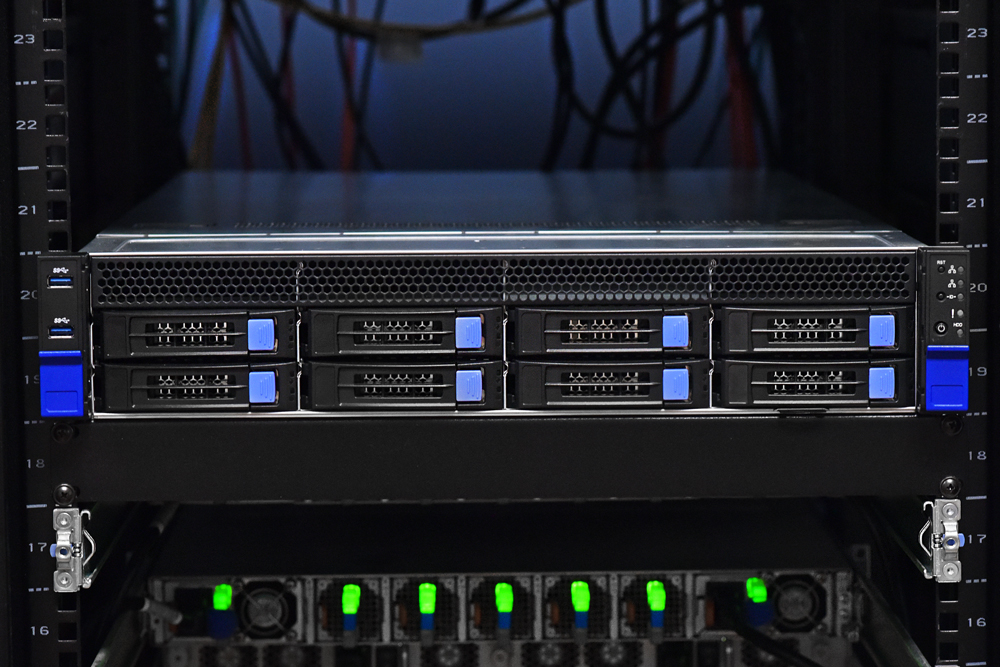 Removing the trays shows that they are set up for U.2 drives right out of the box; however, the side panel features a hinge mechanism that swings open, allowing users to easily drop in a hard drive from the side and lock them in. Once the pins secure the drive nicely into place, you can easily slide the drive back into the tray slot with a nice click. 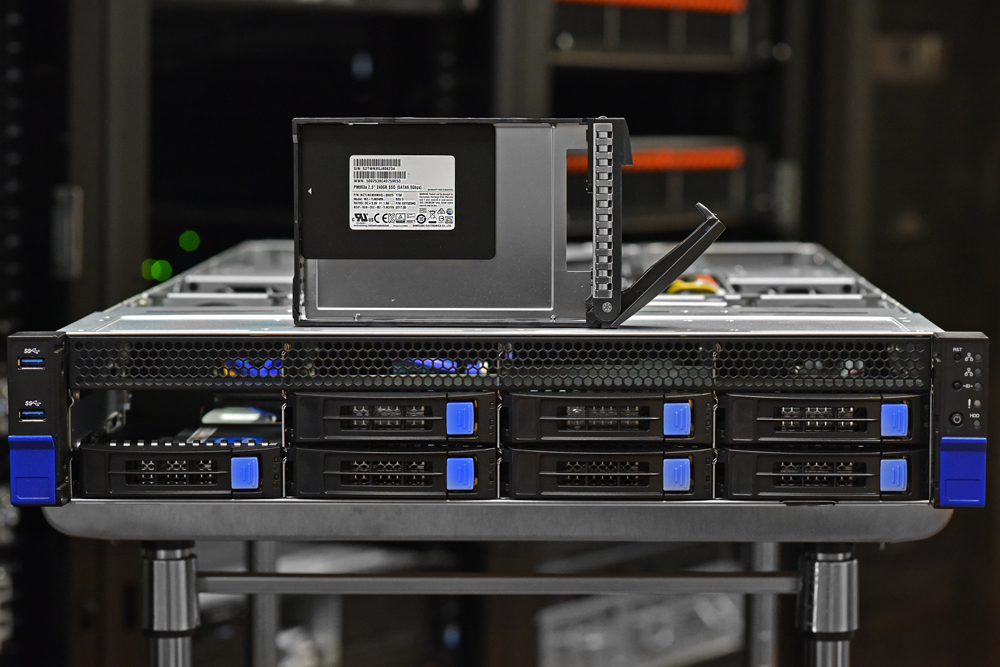 Moving on to the back panel reveals an interesting layout. Starting on the left and right sides are the 4×4 expansion slots. The server is designed mainly for GPUs, so these slots allow you to insert a total of 4 dual-width GPUs (i.e., NVIDIA Volta Tesla V100 GPUs) or 10 single-width GPUs. As a side note when unboxing the server, the expansion slot covers were shipped with foam protective sheets, which we think is a first for us.

Also on the back are redundant power supplies in the middle, two USB ports, monitor and management ports, one 1GbE port, and two 10GbE ports. Overall, a really interesting setup, as these components are typically spread out along the back panel for servers instead of being all clustered in the center.

TYAN makes it very easy to open up the server lid. Simply pull in the two hinges on the top of the case and lift it up (you will have to use a screwdriver to open up the back panel of the server, however). Once everything is removed, you will see right away that all the components are set up through the middle of the server. Though we’ve seen these configurations before, that isn’t very common. 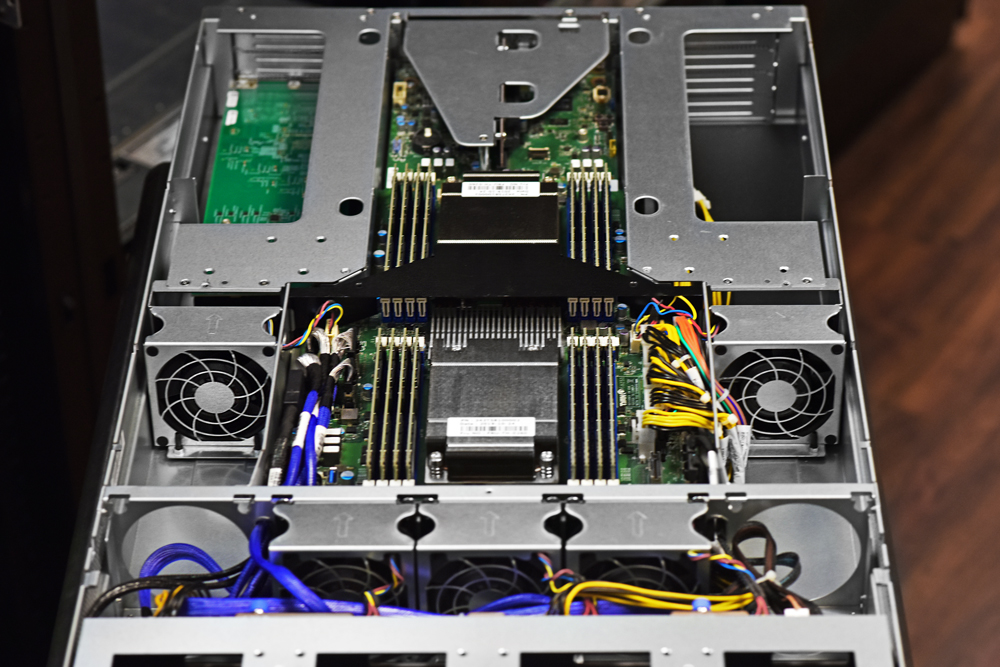 At the front is the backplane where the SATA and NVMe drives are installed. Next are the three 8cm fans, which are placed in the center, leaving open spots on the sides for two additional units. This is interesting because it is set up in a way that allows the GPUs (which are installed on the sides of the rear portion of the server) to get their own airflow due to metal dividers that surround the other components.

As we pull out the fans, we noticed that the main board of the server is elevated slightly on top of a riser. This forces the airflow over the main components, even though only a third of the fan is above the board.

Front and center are the dual-socket AMD CPU slots, with 8 DIMM slots per. 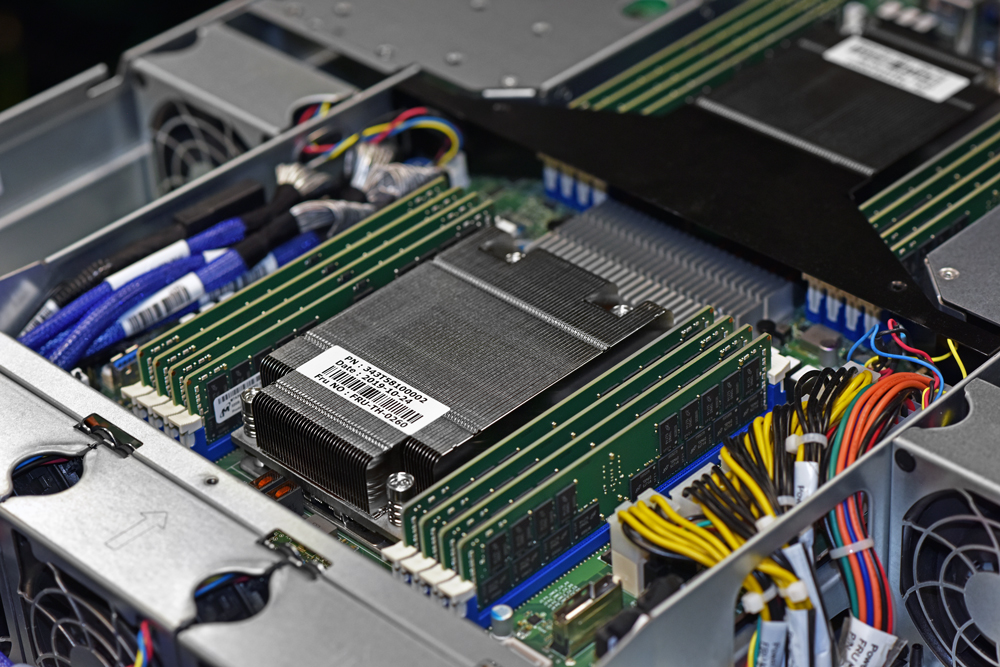 At the back is a riser for the two half-height GPU cards, along with the four possible half-height cards (NVIDIA Tesla T4) that can be installed on either side for a total of 10. You can also go the route of cards like V100s (double-wide), you will get two on each side in addition to the ones in the center. TYAN has also included external power cables for the high-power hungry GPUs, which are easily accessible at the back. This is a very welcomed feature, as most servers require users to both buy the cables and do the wiring themselves, which can be a pain. This only emphasizes that the server is primarily set up to favor GPUs. 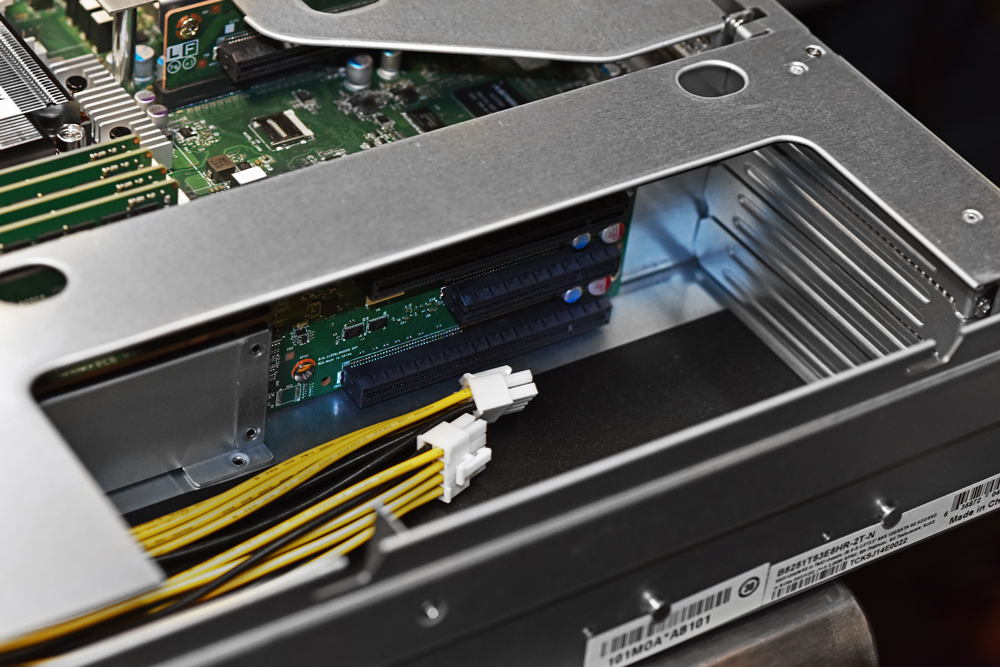 This GPU-focused design comes at the expense of storage, unfortunately. Because they went with the 3-and-half-inch build at the front of the chassis, you can only get eight drives in the TYAN server. You can get a decent amount of storage with HDDs as well as good performance with the U.2 NVMe drives, but it certainly wouldn’t be considered a very dense server. It would have been interesting if they added an M.2 slot either side of the front CPU, but we certainly understand its absence due to the specific use case of this GPU-heavy server. It’s just wishful thinking for a group of storage people.

Random 4K write saw the TYAN server start to suffer from some spikes in performance near the end of the test as IOPS reached (and peaked) at around 665,000 with a latency of 259ms.

For 64K write, the server showed unstable results as the workload got heavier. Once the TYAN peaked at 63,373 IOPS (or 3.66GB/s) and 735.2µs, the performance took a significant hit.

VDI FC Initial Login saw a peak of 160,280 IOPS with a latency of 518µs with a bit of instability at the end of the test.

Finally, VDI LC Monday Login had a peak of 96,535 IOPS with a latency of just 481.4µs, with a bit of uneven performance at the end.

Because it has limited system-cooling abilities, the TYAN TN83-B8251 unfortunately only supports CPUs with lower thermal design power, including dual-socket AMD EPYC 7002 CPUs. This GPU-focused build also comes at a cost of storage, as the server features a 3.5″ build at the front of the chassis limiting it to eight drives. Though this isn’t too big of a deal for many (you still get a good amount of storage using HDDs, in addition to good performance with the U.2 NVMe drives), it will certainly curb organizations that require dense storage for their servers. It also would have been nice if they added a couple of internal M.2 slots by CPUs. That said, TYAN’s design choices are certainly understandable due to its intended use case.

Overall, the TYAN Transport HX TN83-B8251 is a very focused platform that pushes full steam ahead with GPUs. The server is good at what it does, offering strong support for applications that can take advantage of a dense GPU box.