The WD Blue SSHD is a new hybrid drive in a 2.5” form factor. Being a hybrid drive it strives for the best of both worlds. The HDD aspect gives it the high capacity of 1TB, with the performance that falls closer in line to an SSD, with claims of speeds to and from the host of 100MB/s it doesn’t quite reach SSD performance. The WD Blue SSHD has a SATA interface and is compatible with both PC and Mac.

The WD Blue SSHD is a new hybrid drive in a 2.5” form factor. Being a hybrid drive it strives for the best of both worlds. The HDD aspect gives it the high capacity of 1TB, with the performance that falls closer in line to an SSD, with claims of speeds to and from the host of 100MB/s it doesn’t quite reach SSD performance. The WD Blue SSHD has a SATA interface and is compatible with both PC and Mac. Power users, such as photographers, digital artists, and gamers, have to make sacrifices when it comes to selecting a drive. They can get high performance for a high price and limited capacity through an SSD or they can opt for a high capacity at a lower price with limited performance in an HDD. WD Blue SSHD positions itself in the middle. With 8GB of NAND flash, the WD SSHD Blue is several times faster than a traditional 5,400RPM HDD. The drive is self-learning, using an advanced set of algorithms to essentially tier more frequently used data to the flash side and the less frequently used data to the disk side. The SSHD has a traditional SATA interface meaning there are no special upgrades required to install the drive in most computers.

WD has released two form factors, a 3.5” 4TB for desktops, and this drive, which is 2.5” 1TB for laptops. With more and more power users opting to switch to laptops instead of desktops, this particular drive is more appealing to them. It gives them more capacity than generally comes with a laptop and gives them better performance than choosing an HDD only.

The WD Blue SSHD 1TB comes with a 3-year warranty and have a street price of $99.

The WD Blue SSHD is a hybrid drive with a form factor of 2.5” with a 9.5mm z-height. This size allows it to fit in almost all mounting conditions with space concerns and matches the size of other 1TB models on the market. WD follows their standard design scheme with a single sticker on the top cover giving users information such as model, capacity, data of manufacturer and other details. 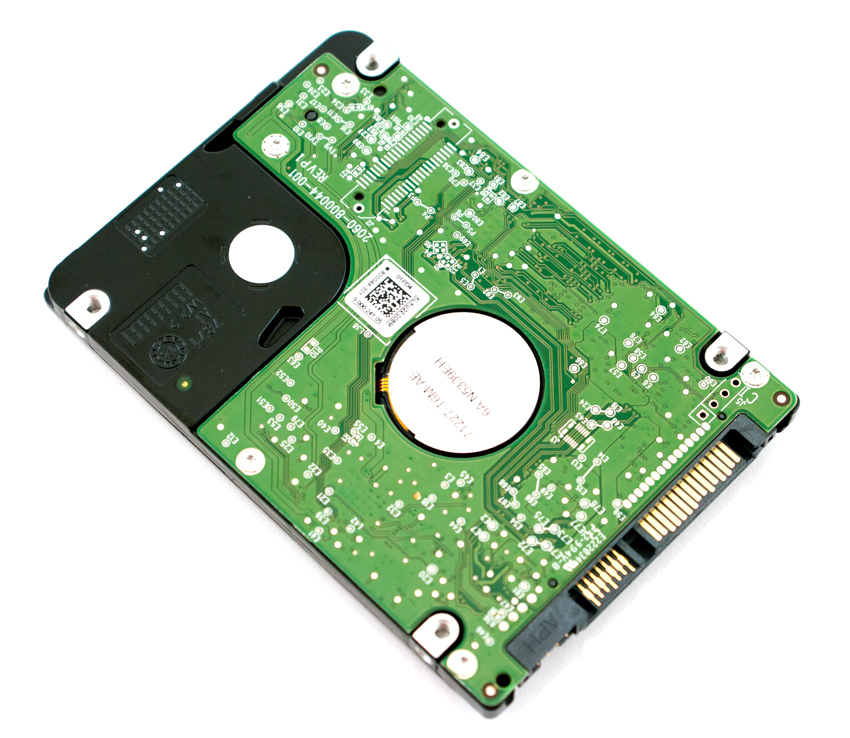 The bottom of the drive is mostly taken up by the circuit board and one can see the standard SATA interface. 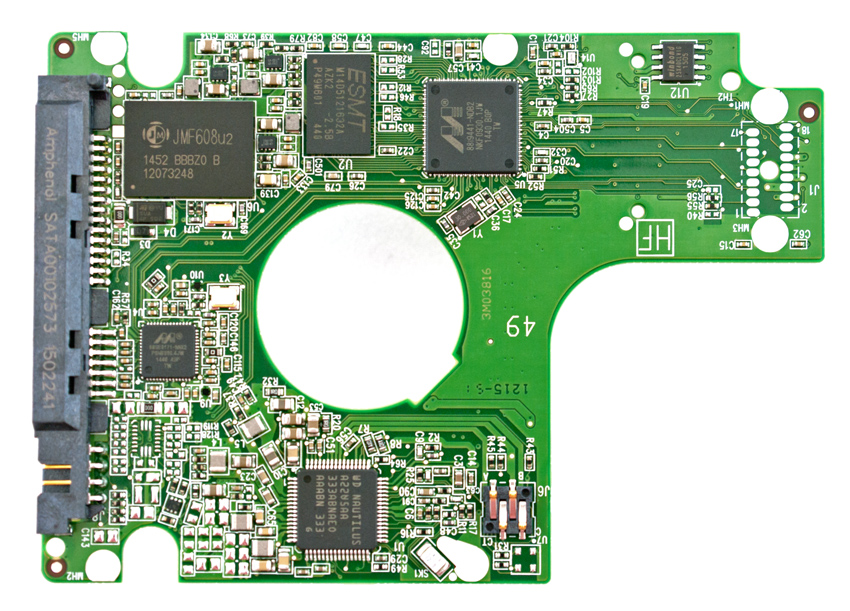 Inside the drive we see that it has Marvell HDD controller as well as a JMicron controller for the caching featureset.

In our first test, which measures 2MB sequential performance, the WD Blue SSHD gave us speeds of 103.42MB/s read and 101.03MB/s write. The Seagate SSHD we tested did come out on top but just ever so slightly with 104.9MB/s read and 103.67MB/s write.

Our next test looks at 2MB random transfer performance. In this scenario, the WD Blue SSHD gave us speeds of 45.3MB/s read and 50.6MB/s write. This time the Seagate SSHD pulled a little more ahead with 50.67MB/s read and 54.71MB/s write.

When looking at IOPS, the WD Blue SSHD had the best throughput on write with 161.23 IOPS (to Seagate’s SSHD with 138.96 IOPS) but came in second on read throughput with 60.18 IOPS, Seagate SSHD barely nudged it out with 61.34 IOPS. 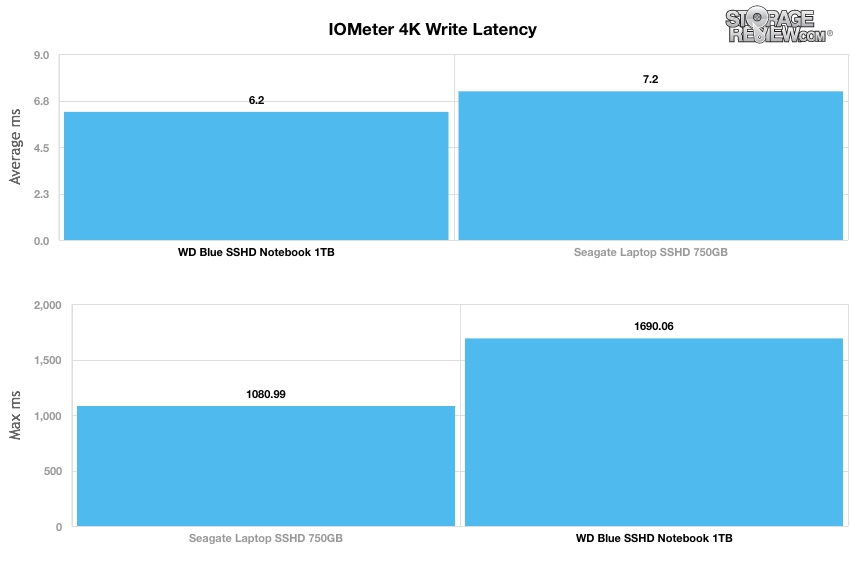 The first is our database profile, which uses a 67% read and 33% write workload mix primarily centered on 8K transfer sizes. In the scenario, the WD Blue SSHD started off behind the Seagate SSHD and trailed the entire test, peaking at 109.73 IOPS. 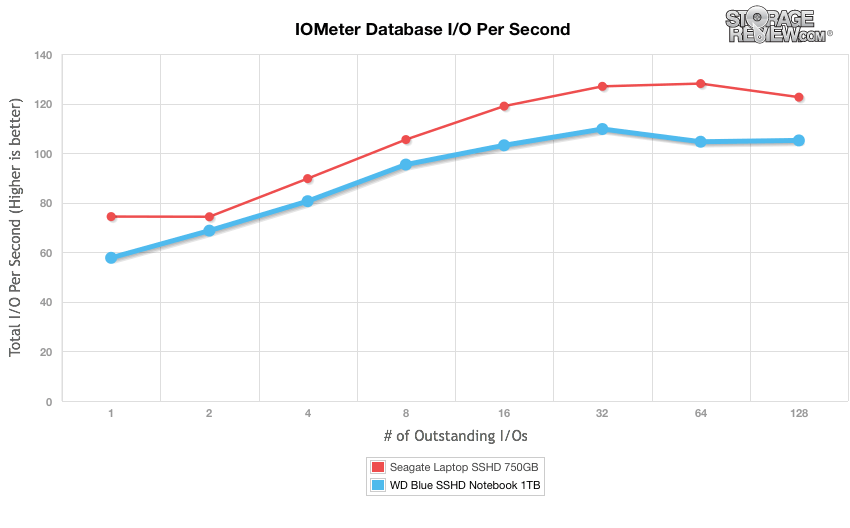 Our web server profile is read-only with a spread of transfer sizes from 512-byte to 512KB. Here, the WD Blue SSHD started off stronger and kept the lead for a little more than half way before it was edged out by the Seagate SSHD. However they finished within 3 IOPS of each other. 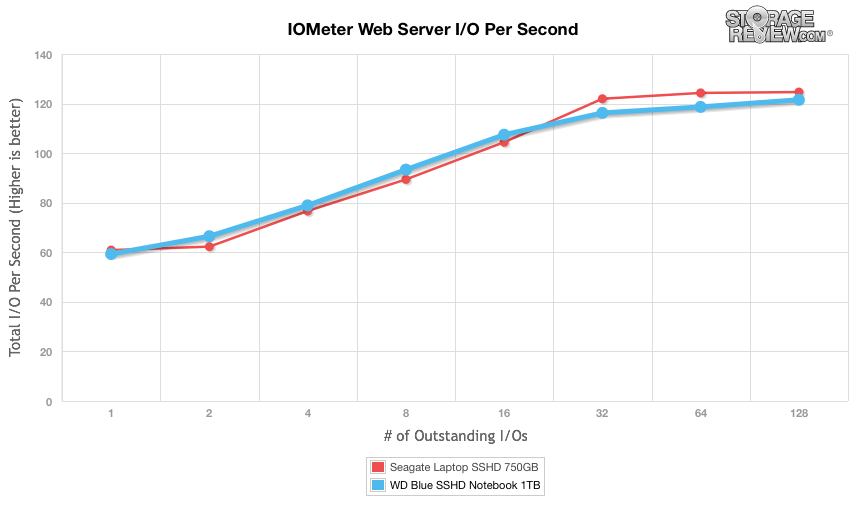 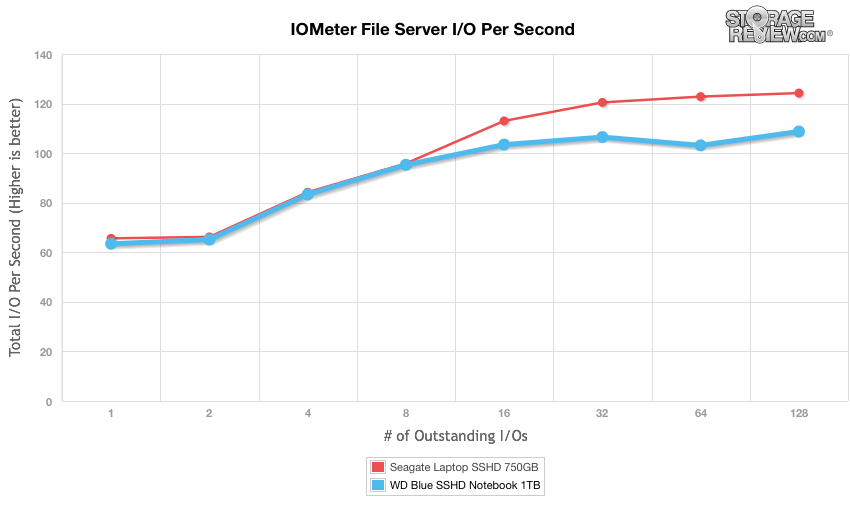 Our last profile looks at workstation activity, which is comprised of a 20% write and 80% read mixture using 8K transfers. As with our database profile, the WD Blue SSHD starts off behind and trails the Seagate SSHD throughout. 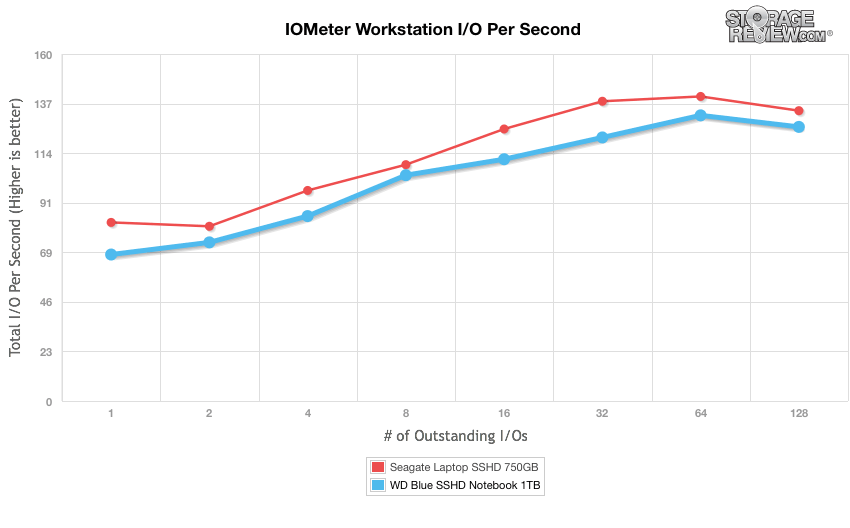 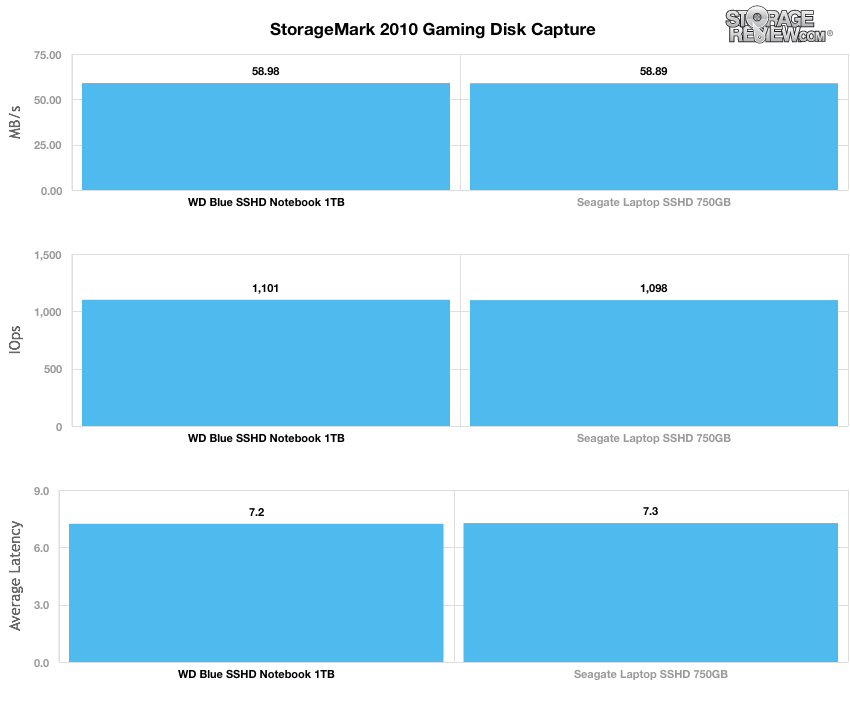 The WD SSHD Blue 1TB is a 2.5” hybrid drive that gives power users a marriage of HDD capacity with SSD performance. The drive has 8GB of NAND flash and is self-learning, moving the most accessed files to the flash and the least accessed are kept on the HDD. Users will see faster system boots, faster load times, and better responsiveness than they would see from a traditional HDD. The drive will fit in most laptops, is PC and Mac compatible, and comes with a standard SATA interface so there is no need for upgraded hardware in most cases.

Looking at performance, the two drives we compared performed very close to one another. Some tests, such as 2MB sequential and our gaming disk capture, showed barely any difference between the drives performance wise (though the WD Blue SSHD would have the advantage here have an extra 250GB of capacity). Neither drive performed as well as an SSD but both performed better than a non-hybrid HDD. In our 2MB sequential transfer benchmark the WD Blue SSHD had read speeds of 103.42MB/s and write speeds of 101.03MB/s. In 2MB random the drive had read speeds of 45.3MB/s and write speeds 50.6MB/s. In our 4K test the drive had a throughput of 60.18 IOPS read and 161.23 IOPS write and had an average write latency of 6.2ms. In our consumer real-world benchmarks the WD pulled ahead of the Seagate drive significantly in the HTPC scenario and ran neck and neck in the gaming scenario.

The WD Blue SSHD 1TB is a 2.5” hybrid drive that is an ideal marriage of performance and capacity for power users that need such a mix in their laptops.