The WD Gold hard drive is designed for a wide range of demanding use cases, including small- to medium-scale enterprise servers/storage and rack-mount datacenter servers/storage enclosures. Announced back in April of this year, the WD Gold can handle up to 550TB in workloads per year with an MTBF of 2.5 million hours. The WD Gold also leverages HelioSeal helium-technology, which allows the HDD to increase performance, capacity per square foot, power efficiency and low power consumption needed to effectively operate in datacenter environments of all sizes.

The WD Gold hard drive is designed for a wide range of demanding use cases, including small- to medium-scale enterprise servers/storage and rack-mount datacenter servers/storage enclosures. Announced back in April of this year, the WD Gold can handle up to 550TB in workloads per year with an MTBF of 2.5 million hours. The WD Gold also leverages HelioSeal helium-technology, which allows the HDD to increase performance, capacity per square foot, power efficiency and low power consumption needed to effectively operate in datacenter environments of all sizes. 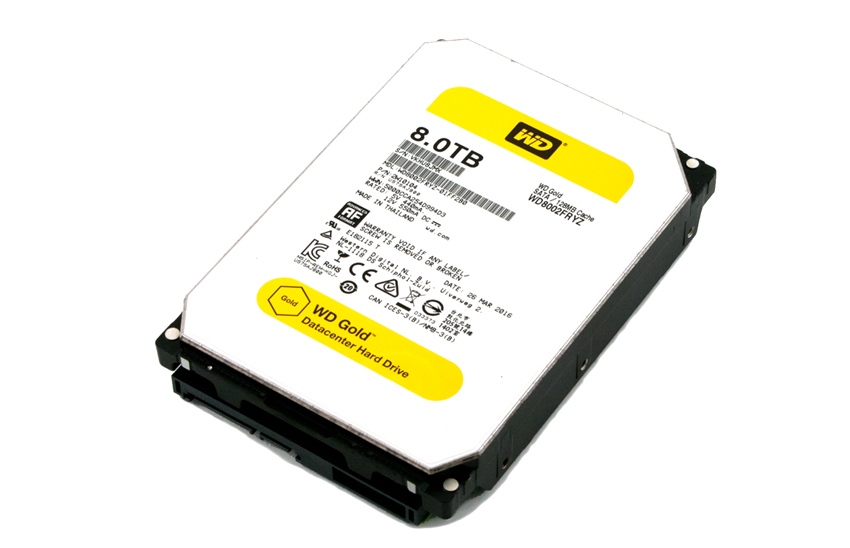 When it comes to performance, WD claims that the Gold is capable of up to a 18% in increased sequential performance compared to the previous generation WD Red 4TB datacenter drives as well as a 30% improvement in random write performance over the previous generation of WD Red 6TB datacenter drives. WD has also equipped the WD Gold with dual actuator technology, which is a head positioning system that features two actuators to improve positional accuracy over the data tracks. 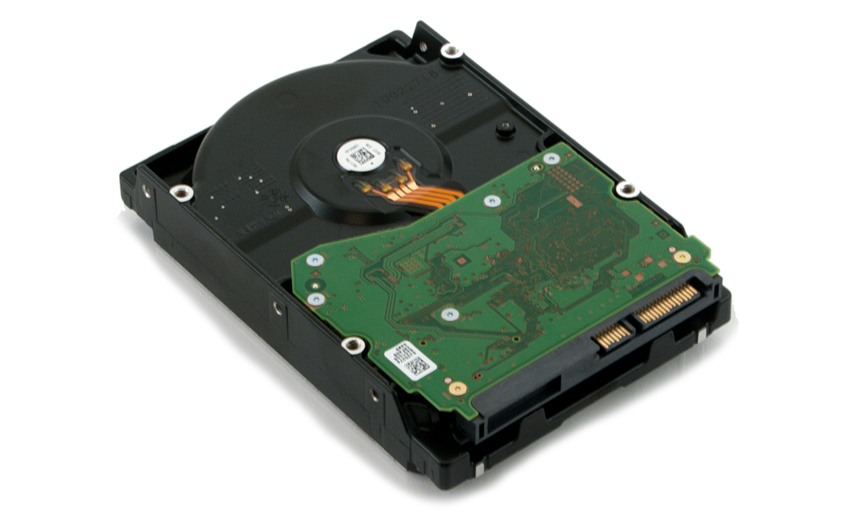 WD Gold hard drives are backed by a 3-year warranty and a premium dedicated support-line for all customers. Our review units include eight of the 8TB capacity.

In the following section of this review, we will show the 8TB WD Gold performance in both iSCSI and CIFS configurations. WD supplied StorageReview with eight samples of their new datacenter HDDs, which we configured used inside a Synology DiskStation DS1815+ (RAID10).

We will be including the following drives as comparables in the DS1815+ configuration:

For iSCSI 4k average latency, the WD Gold remained in the middle of the leaderboard for read activity performance with 98.83ms, while only trailing the Seagate IronWolf in writes with 139.78ms for second place among the tested drives.

The results 4k max latency for CIFS showed the WD Gold at the top of the leaderboard in read performance with an impressive 1,851.9ms; however, it average performance in maximum writes with 1,350.8ms.

In standard deviation, WD Gold posted middle-of-the-pack numbers in read performance (CIFS) with 565.96ms, while writes were a bit further behind with 165.98ms.

For iSCSI standard deviation, the WD Gold was last in read performance (154.08ms); however, it had the second-best write activity with 124.63ms.

The next benchmark tests the drives under 100% read/write activity, but this time at 8k sequential throughput. With CIFS configuration, the WD Gold was right up there on the leaderboard, posting the 3rd best read performance (by a narrow margin) with 57,103 IOPS. Reads were a bit lower, as we measured the WD Gold throughput at 42,737 IOPS.

When looking at the 8k 100% read/write configured in iSCSI, the WD Gold posted 11,173 IOPS read and 19,802 IOPS write, which was third among the tested enterprise drives. 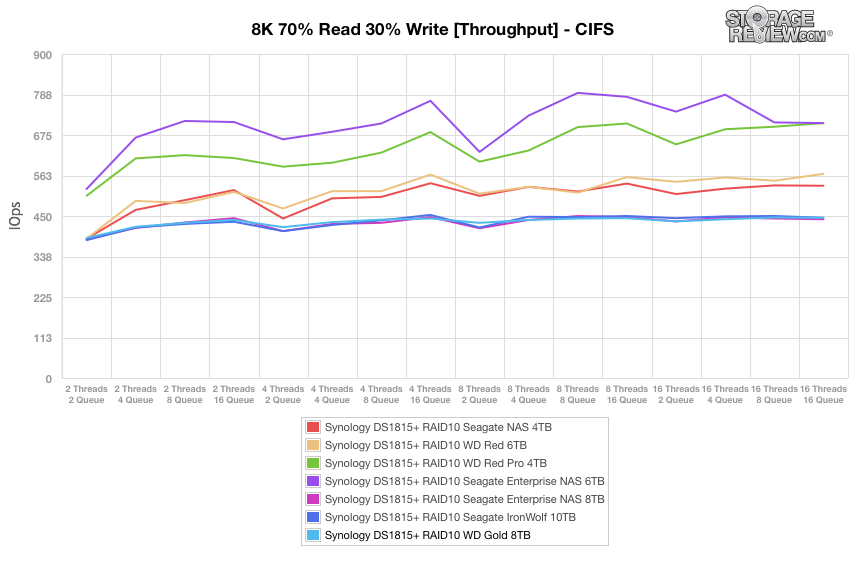 In iSCSI, the WD Gold performed much better. In this scenario, the WD drive started off with 462 IOPS then peaking with 1,995 IOPS for third place. 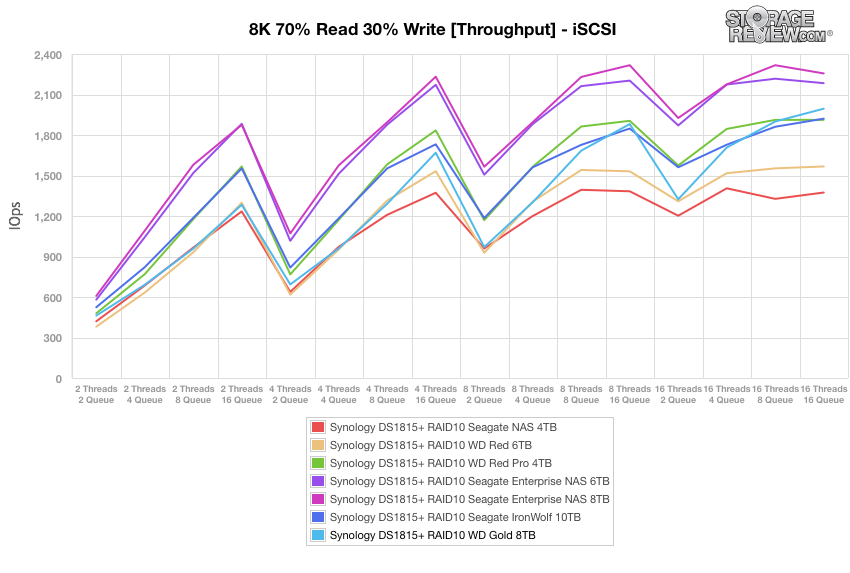 In our average latency test for mixed 8K 70/30 workload (CIFS), the WD Gold posted a range of 10.22ms to 573.32ms. These results placed it at the bottom of the pack alongside the Seagate Enterprise and Seagate IronWolf HDDs. 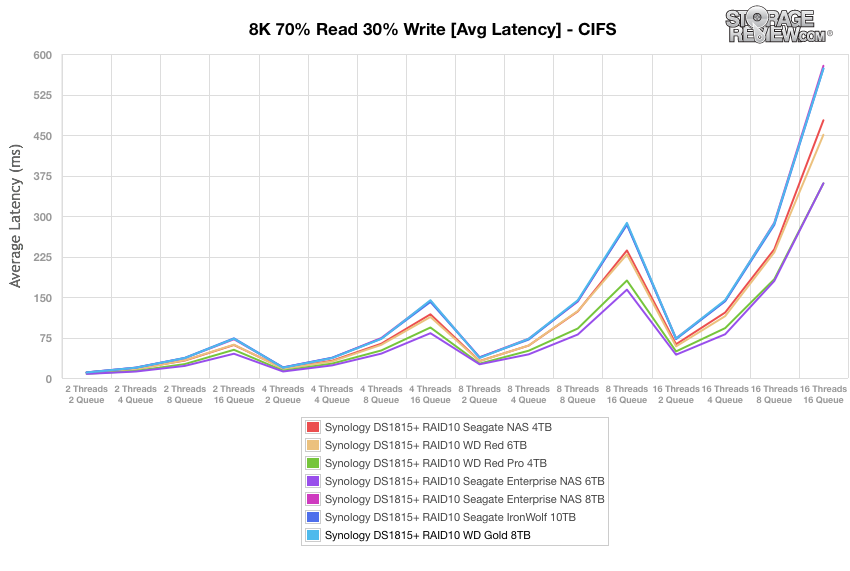 Again, the WD Gold performed much better in iSCSI, posting a range beginning at 8.63ms and a latency of 128.22ms. 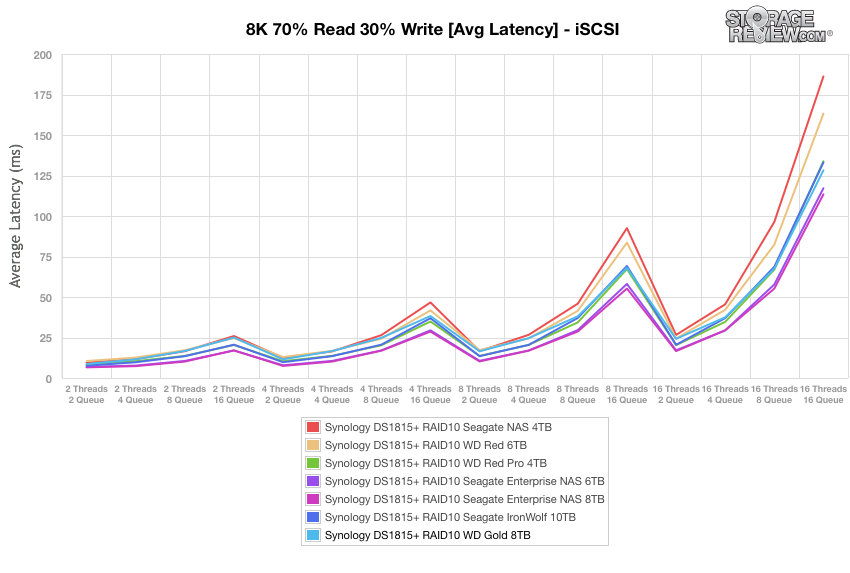 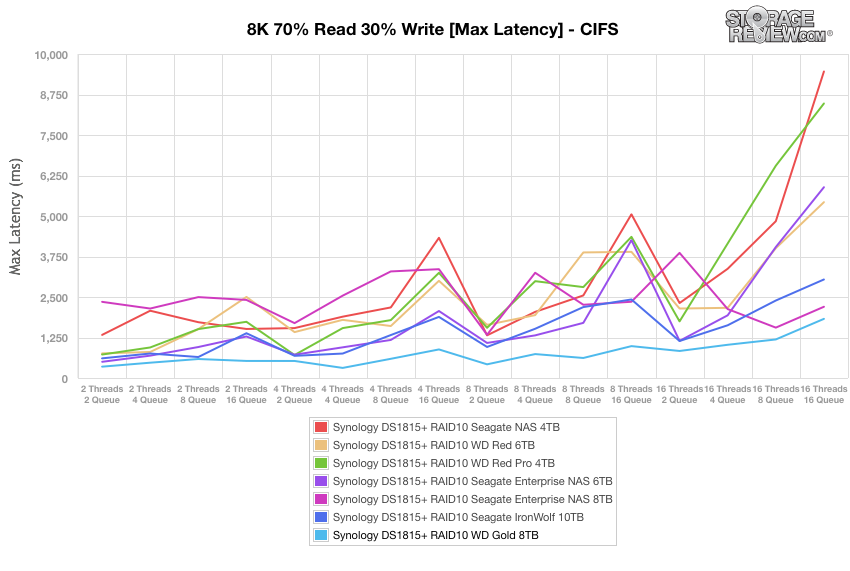 In iSCSI max latency, though it wasn’t the top performing drive, the WD Gold was still one of the more consistent ones. Here, it started off with 349.82ms and ended up with 3,041.15ms. 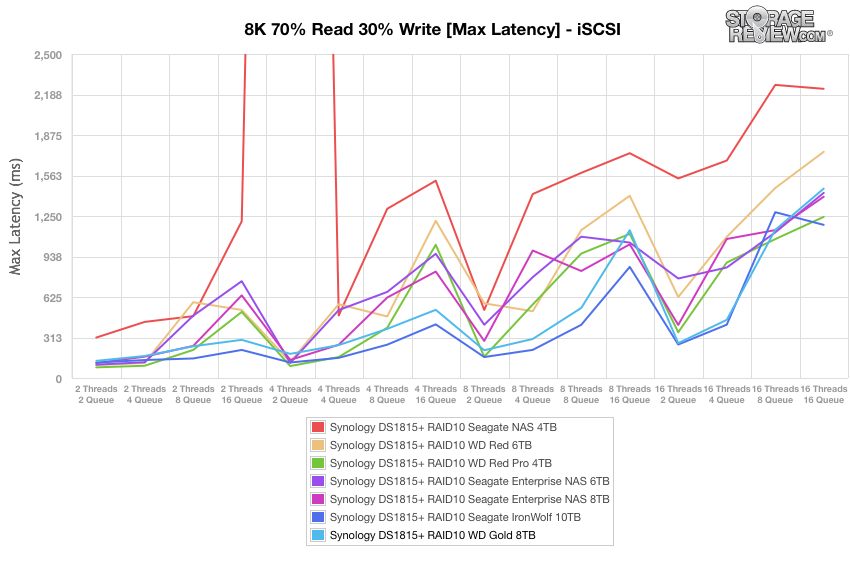 The standard deviation latency results for our 8k 70/30 benchmark in CIFS placed the WD Gold at the top of the leaderboard again (just behind the Seagate Enterprise 8TB), posting a range of 7.73ms to 357.47ms. 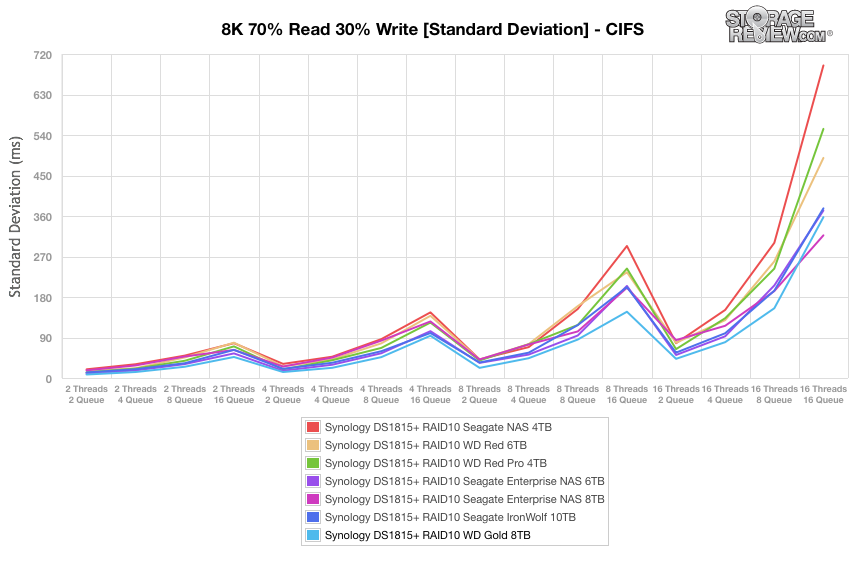 Results told a similar story during the iSCSI configuration, as the WD Gold had a range of 6.58ms through 357.47ms (trailing just the Seagate Enterprise 8TB once again). 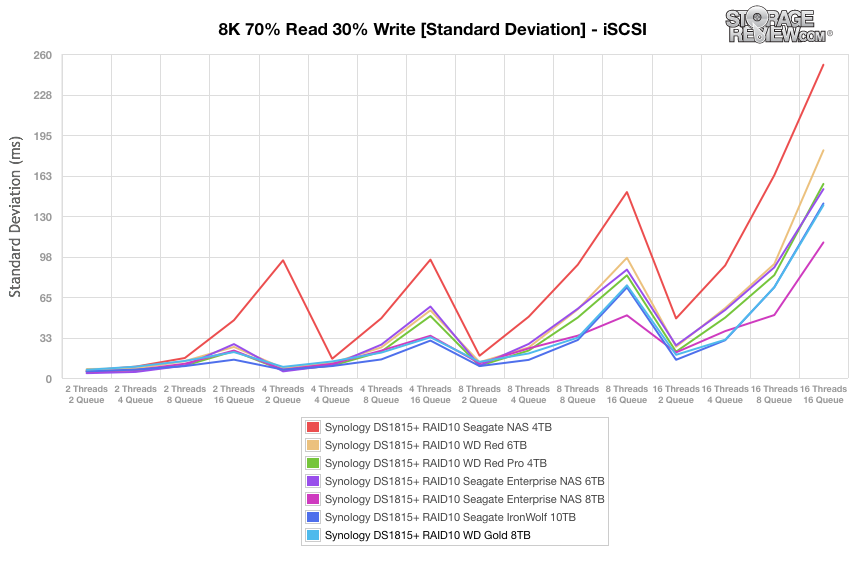 Our last test is the 128k benchmark, which is a large-block sequential test that shows the highest sequential transfer speed. In CIFS, the WD Gold landed at the bottom of the leaderboard with 462.0MB/s read and 438.4MB/s write; however, as you can see in the chart below, the disparity among the tested drives were negligible.

The iSCSI configuration had a much larger spread. Here, the WD Gold reached 417.4MB/s read and 260.5MB/s write, placing it second and second last, respectively.

The WD Gold line of data center drives is a welcomed addition to company’s portfolio of enterprise drives. This workhorse HDD can handle up to 550TB per year in 24/7 operation and has an impressive MTBF of 2.5 million hours. With a wide range of capacity options, the WD Gold also has the ability to leave a very small physical footprint per TB, especially when leveraging the top-end 10TB model. Moreover, because it is helium-filled hard disk drive, the drives exhibit a reduction in vibration and other mechanical noises, as well as a lessened power requirement.

To test the WD Gold, we populated the Synology DiskStation DS1815+ with eight drives using both CIFS and iSCSI configurations. During these tests, the WD Gold did offer solid numbers, but it fell behind in several areas. During the 4k random benchmark, the WD Gold posted average CIFS read and write performance of 589 IOPS and 1,789 IOPS, respectively, while iSCSI offered an improved 2,728 IOPS read and 1,831 IOPS write. Our 8k sequential throughput test showed the WD Gold with the 3rd best read performance with 57,103 IOPS, though reads were a bit lower at 42,737 IOPS.

When configured in iSCSI, the WD Gold posted 11,173 IOPS read and 19,802 IOPS write, placing it in the middle of the pack. During the large-block sequential test, which shows the highest sequential transfer speed, the WD Gold landed at the bottom of the leaderboard with 462.0MB/s read and 438.4MB/s write in CIFS; however, the margin between tested drives performance was negligible. Our iSCSI configuration showed a much larger spread, however, as the WD drive posted 417.4MB/s read and 260.5MB/s write.

The WD Gold is designed as a long-lasting nearline datacenter drive that offers upwards of 10TB in capacity and solid overall performance for applications that demand high-capacity drives.