The ReadyNAS 4312 series packages Netgear’s latest storage technologies into a 2U rackmount form-factor. The ReadyNAS 4312X features an Intel Xeon E3-1245v5 quad-core processor with 16GB DDR memory and dual 10GbE interfaces for network throughput, while ReadyNAS OS 6 provides the administrative interface to a wide range of functionality. The result is a general-purpose workhorse NAS that can take on most common SMB scenarios including shared storage, backup, and virtualization.

The ReadyNAS 4312 series packages Netgear’s latest storage technologies into a 2U rackmount form-factor. The ReadyNAS 4312X features an Intel Xeon E3-1245v5 quad-core processor with 16GB DDR memory and dual 10GbE interfaces for network throughput, while ReadyNAS OS 6 provides the administrative interface to a wide range of functionality. The result is a general-purpose workhorse NAS that can take on most common SMB scenarios including shared storage, backup, and virtualization.

With a full complement of 10TB drives, the ReadyNAS 4312X can serve up to 120TB of raw internal HDD storage, with expansion options that make it possible to manage up to 48 additional bays via two EDA4000 chassis. Some of its most attractive services and features include unlimited snapshots, thin provisioning, replication, encryption, and real-time antivirus. In terms of support, Netgear offers a five-year warranty and a next business day hardware replacement guarantee.

The ReadyNAS 4312X front panel sports a sleek and understated design that blends seamlessly into rack mount enterprise environments, with a control panel at left and access to the drives bays secured behind a lockable cover. The control panel incorporates power and reset switches along with six indicator lights for system health including drive and network status information. With the locking cover removed, the 4312X’s 12 hot-swappable drive bays are accessible.

The rear panel of the 4312X provides access to the system’s dual 550W power supplies, at left. Four Gigabit Ethernet interfaces are available along the bottom of the center section, which are supplemented by two 10Gbps Ethernet interfaces farther to the right. The ReadyNAS 4312S model variations feature dual 10Gbps SFP+ interfaces instead of 10GbE. The rear panel is rounded out by two eSATA expansion ports and two USB 3.0 ports.

Setup for the ReadyNAS 4312X begins with accessing ReadyCLOUD, Netgear’s online service that discovers and configures ReadyNAS systems. The ReadyCLOUD setup wizard helps administrators move quickly through the process to bring the array online. The ReadyCLOUD service can also be used to access and manage data on the array once it is online as an alternative to direct access to the 4312X via ReadyNAS 0S 6.

ReadyNAS OS 6 provides a streamlined administrative dashboard that provides essential information about how the system is configured. Nested horizontal menus provide the structure for navigating within ReadyNAS OS. These horizontal menus are complemented by hot links within the bodies of individual pages which help admins jump directly between sections of the interface.

The Volumes section provides information and management tasks for the ReadyNAS 4312X. In this case we have configured the array of twelve 8TB Seagate Enterprise NAS HDDs as a single RAID10 pool.

The Performance section of ReadyNAS OS 6 provides quick insight into the thermal management systems of the ReadyNAS 4312X, including temperature readings from each of the installed drives. This screen also allows administrators to review the 4312X’s own measurements of its data transfer performance. 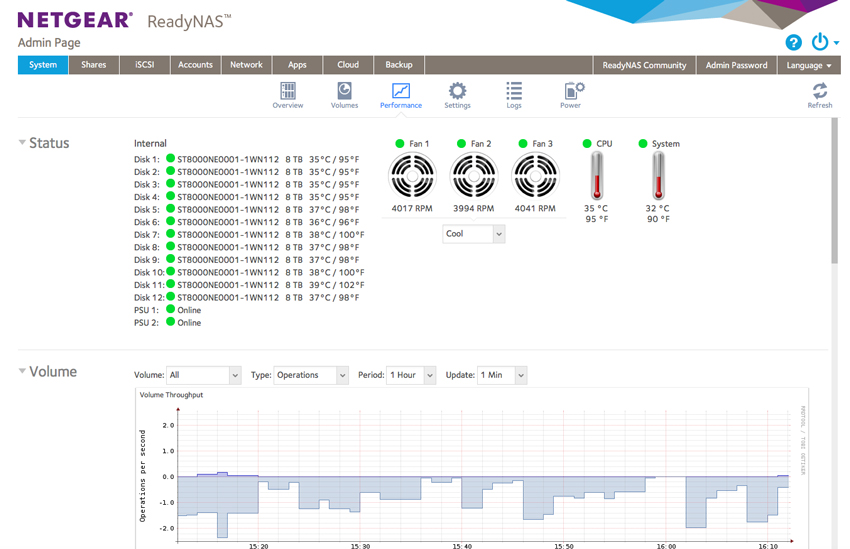 A more detailed look at the ReadyNAS OS 6 administrative interface is available in our review of the ReadyNAS 212.

We populated the ReadyNAS 4312X with 12 Seagate Enterprise NAS 8TB HDDs which we have found to offer strong performance in addition to NAS-oriented reliability and endurance specifications. Consumers and businesses that chose to go with the diskless model can use their drives of choice; however, we recommend reading our Pick The Right Drive For The Job article, as desktop drives are not ideal in a 24/7 NAS environment.

We tested both CIFS and iSCSI performance with the 12 drives configured as a RAID10 array.

Our enterprise hard drive benchmark process preconditions each drive into steady-state with the same workload the device will be tested with under a heavy load of 16 threads with an outstanding queue of 16 per thread, and then tested in set intervals in multiple thread/queue depth profiles to show performance under light and heavy usage. Since hard drives reach their rated performance level very quickly, we only chart the main sections of each test.

Our first enterprise workload consists a long sample of random 4k transfers with 100% write and 100% read operations. In terms of 4k throughput, the ReadyNAS 4312X performed better with writes than reads. Between the two access protocols, iSCSI outperformed CIFS, at 332IOPS for read operations and 3,318IOPS for write operations.

The ReadyNAS 4312X also experienced the lowest 4k latency results when accessed via iSCSI, with 768.81ms latency during read operations and 77.15ms during write operations.

The 4312X’s maximum 4k latency in iSCSI mode bested its CIFS performance, although the difference was relatively small. Accessed via iSCSI, the 4312X’s maximum latency for read operations was 2611.4ms, and its maximum write latency clocked in at 77.15ms.

Standard deviation calculations for the 4k latency measurements show the iSCSI protocol experienced more consistent latencies for read operations than access via CIFS. The standard deviation results for 4k transfers from the ReadyNAS 4312X measured at 382.42ms for iSCSI  compared to 869.34ms for CIFS.

Our next results are taken from a workload with 100% 8k sequential throughput with a 16T/16Q load in 100% read and 100% write operations. During this benchmark, read performance was similar regardless of which protocol was used to access the 4312X. When configured for iSCSI, the 4312X reached 114,971IOPS, edging out 102,561IOPS with CIFS. iSCSI write throughput is superior to CIFS, at 68,525IOPS versus 53,009IOPS.

The next four charts are based on a protocol consisting of 70% read operations and 30% write operations with an 8k transfer size. The workload is then varied from 2 threads and a queue depth of 2 up to 16T/16Q. In terms of throughput, iSCSI transfers outperformed CIFS across the board during the 8k 70/30 benchmark, topping out at 473IOPS with a 16T/16Q workload. iSCSI’s best overall performance occurred with deep queues.

The overhead of handling CIFS transfers is apparent when comparing the average transfer latency for the 8k 70/30 workloads. At the top end of the scale with 16 threads and a queue of 16, the CIFS protocol experienced an average latency of 997.46ms compared to 540.45ms for iSCSI transfers.

There were no surprises when we reviewed the maximum latencies that were measured during the 8k 70/30 benchmark, although this was one measurement in which CIFS access did not always correlate to lower performance than iSCSI. The greatest latencies across the board were measured with the most intense workloads, peaking at 2,3417.14ms with iSCSI transfers under a 16T/16Q load.

Standard deviation calculations for the 8k 70/30 benchmark reveal that CIFS transfers experienced more consistent latencies throughout the protocol than iSCSI transfers. While iSCSI offers more throughput for these synthetic workloads, CIFS transfers are executed in a more predictable amount of time.

The final synthetic workload which we measured for the ReadyNAS 4312X is based on a transfer size of 128k. This benchmark uses a relatively a large block in a sequential test designed to the highest sequential transfer speed for a platter drive. The 4312X’s iSCSI transfer mode was able to read and write more data during the benchmark than CIFS, edging up as high as 1,153,843KB/s for read operations over the iSCSI protocol. We measured greater CIFS performance for sequential write operations (709,252KB/s) than with read operations (620,787KB/s).

Just a few years ago, it would have been hard to imagine a system like the ReadyNAS 4312X that consolidates and commoditizes an array of 12 storage bays and a full suite of enterprise services at a price under $10,000. ReadyNAS OS 6 brings a comprehensive suite of storage and administrative functionality to the table, allowing the 4312X to be deployed into a variety of environments without the need for complex manual configuration. Under the hood, the NAS sports a Intel Xeon E3-1245v5 3.5GHz Quad Core Processor, 16GB of DDR4 memory, and can have up to 120TB of capacity (expandable to 600TB with expansion units) all within a 2U form factor.

The ReadyNAS 4312X makes the most of Netgear’s ReadyNAS technology portfolio and a 2U form factor. The result is a powerful and flexible NAS with straightforward deployment and configuration workflows.