Western Digital released the My Cloud EX2 Ultra in early February. This high performance 2-bay NAS comes with a few added benefits in comparison to its predecessor, the My Cloud EX2. The My Cloud EX2 Ultra gives you secure access to your files remotely and provides a simplistic platform for syncing and sharing content across computers. With multiple back-up options, this NAS has everything you’ll need for the home office or small business.

Western Digital released the My Cloud EX2 Ultra in early February. This high performance 2-bay NAS comes with a few added benefits in comparison to its predecessor, the My Cloud EX2. The My Cloud EX2 Ultra gives you secure access to your files remotely and provides a simplistic platform for syncing and sharing content across computers. With multiple back-up options, this NAS has everything you’ll need for the home office or small business. 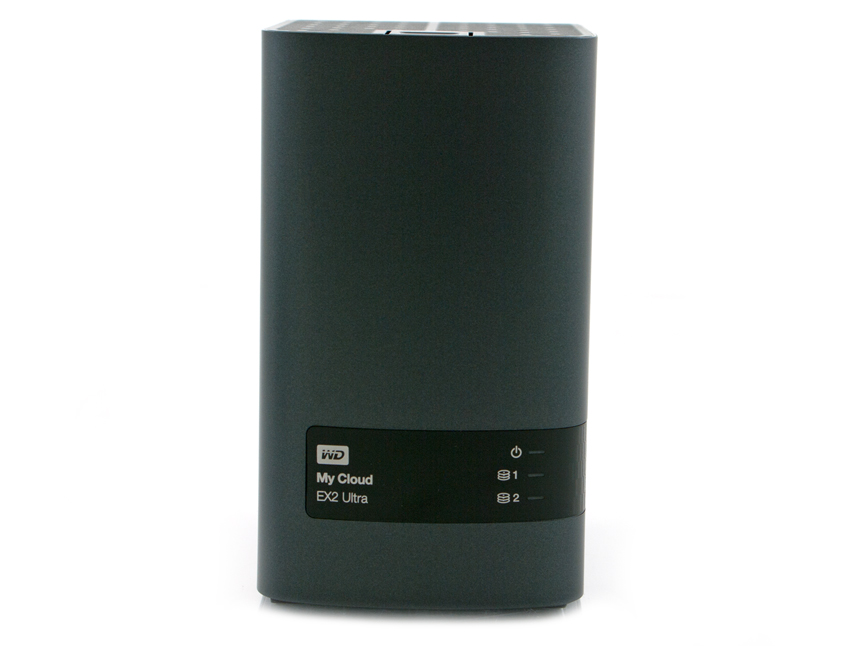 Users can choose from one of four My Cloud EX2 Ultra models: diskless, 4TB, 8TB, or 12TB. The options that come with storage use the WD Red NAS hard drives and have a three-year limited warranty. If you’d rather build your own, you can choose the diskless model and add drives yourself, so long as they are compatible.

The My Cloud EX2 Ultra looks almost identical to its older brother (My Cloud EX2). The front of the body has 3 LED status lights for power/connectivity, bay 1, and bay 2.

A matte black covering wraps around the sides and front seamlessly, giving the machine an integrated and sleek feel. The top and bottom are covered in a ventilated covering to disperse heat effortlessly. 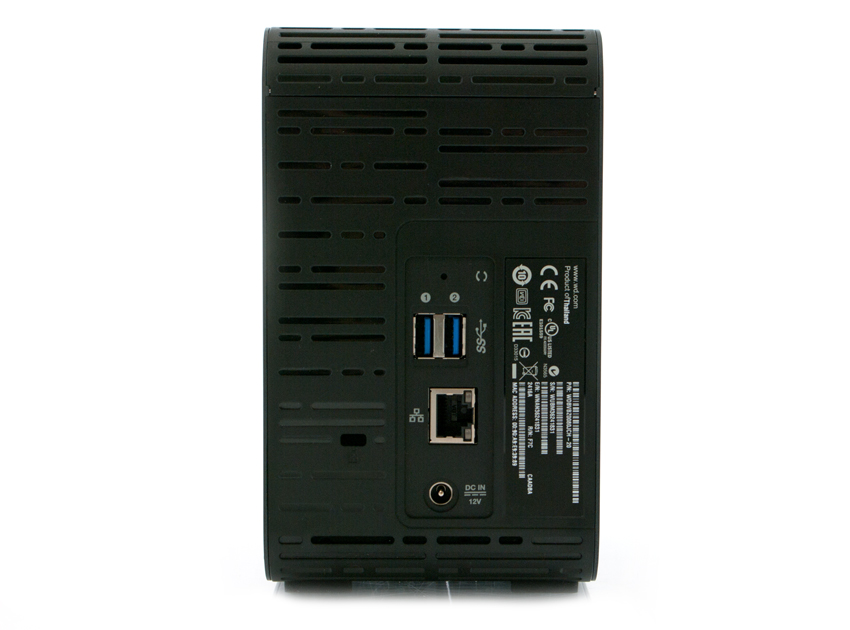 Like other devices in the My Cloud family, the EX2 Ultra is easy to set up. The online user manual takes you through all of the necessary steps to get the machine up and running. WD also has mobile apps for iOS and Android, allowing you access to your content from anywhere. 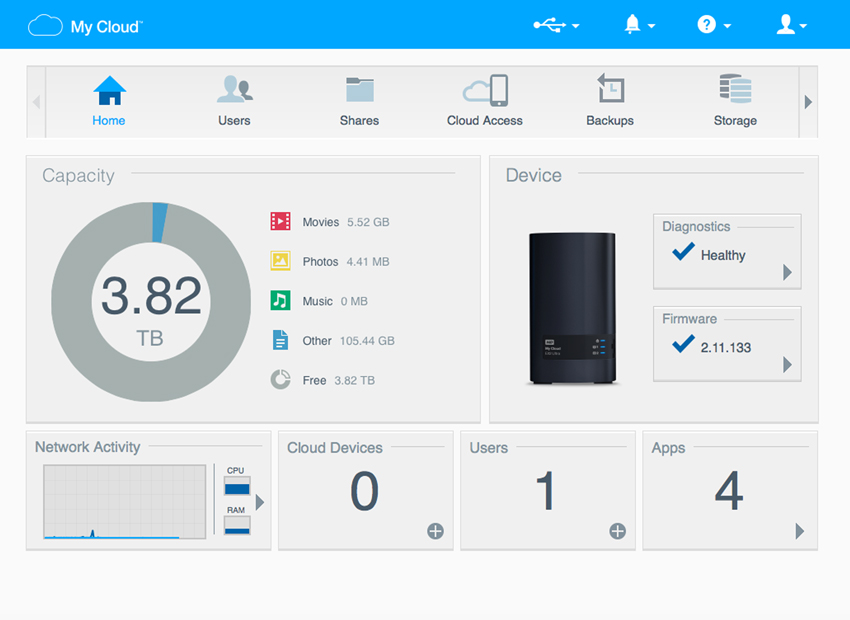 The My Cloud OS has an indisputably simple design. The intuitive layout makes navigating through the features and settings a breeze. The home page displays the remaining free capacity, system diagnostics, and network activity. 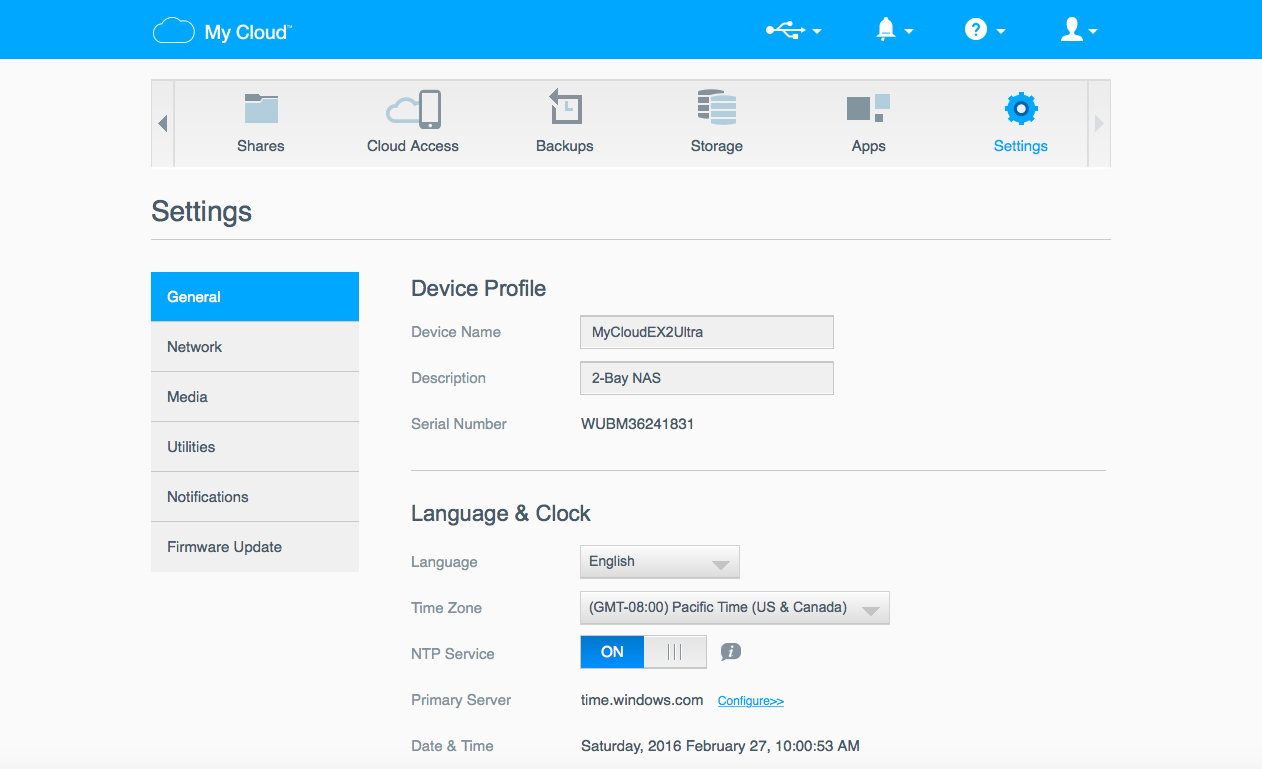 The ribbon at the top of the interface provides links to the tools and settings. 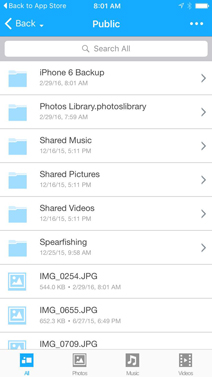 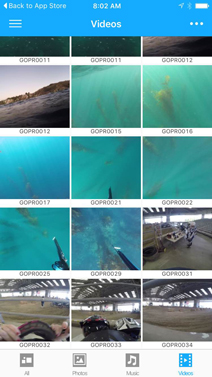 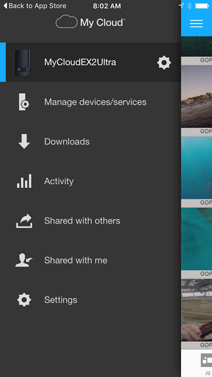 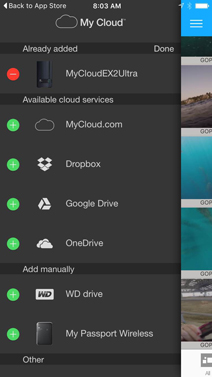 The device also can be accessed with mobile devices where users can view files, backup files such as photos and videos, check on the status of the device, and share files with others.

We ran the 8TB version of the My Cloud EX2 Ultra through its paces with our standard StorageReview Test Lab regimen. The following profiles were used to compare performance.

We first took a look at 4K performance at 100% read/100% write activity. While the new EX2 Ultra does not surpass the EX2 in write activity, read activity in iSCSI outperformed with an IOPS of 329.

Next, we measured average latency under 100% read/write activity where the EX2 Ultra had superior performance in read activity with latency as low as 776.99ms in iSCSI. With writers on the other hand, the Ultra had higher latency in both iSCSI and CIFS with iSCSI being over two times higher than the non Ultra.

Looking at max latency we saw that the Ultra had the lowest write latency in CIRS with 2,295.5ms but its write latency in iSCSI was the highest overall at 8,800.4ms. It had superior read latency in both iSCSI and CIFS compared to the non-Ultra model.

Compared to the fixed 16 thread, 16 queue max workload we performed in the 100% 4k write test, our mixed workload profiles scale the performance across a wide range of thread/queue combinations. Looking at throughput the Ultra found itself lagging behind the non-Ultra once again. The iSCSI peaked around 200 IOPS while the CIFS hovered right above the 100 IOPS mark throughout testing.

Average latency gave us similar placing with the Ultra having slightly higher latency than the non-Ultra throughout the testing in both iSCSI and CIFS.

Max latency showed us more consistent CIFS latency but in either case the Ultra fell behind the non-Ultra.

With standard deviation the Ultra ran with higher latency in both iSCSI and CIFS with iSCSI have the largest gap in speeds.

The last test in our Synthetic Workload testing is the 128k test, which is a large block sequential test that shows the highest sequential transfer speed possible. Throughout our benchmarks the Ultra had been running slightly behind the on-Ultra version, especially in latency. Here we see the Ultra pull out ahead with speeds of 116MB/s read and 108MB/s write in CIFS and 115MB/s read and 112MB/s write in iSCSI.

Like its brethren, the WD My Cloud EX2 Ultra is easy to use and is supported by a simplistic user interface. Getting the device up and running on your network only takes a few minutes, as this is one of the easiest NAS setups on the market. The latest model comes with several capacity options with the capacity on the high end being 12TB. It also provides users with several backup options making it an attractive choice for small and home offices.

Performance wise, the My Cloud EX2 Ultra performs well for the home or small office use cases at a wallet-friendly price point. The EX2 Ultra has a leg up on its previous generation EX2 with 128K sequential performance with speeds as high as 116MB/s read and 112MB/s write. However random performance is lacking in comparison to the EX2. This is most noticeably seen on the 8K 70% read 30% write charts with lower throughput and higher average and max latency. In the end most users probably won't notice much about the performance though; the target demographic will find access times acceptable and should be more impressed with ease of use than anything else.

The WD My Cloud EX2 Ultra offers a clean design, both externally and with the user interface, home/small office targeted features, and one of the easiest setups on the NAS market, all at an affordable price.