The Seagate Enterprise NAS is the company’s purpose-built line of HDDs to address mid-range NAS, server and cloud storage use cases. For this review, we will be looking at the 8TB model, which is Seagate’s most recent addition to the Enterprise portfolio and 2TB more in storage capacity than the previously reviewed Seagate Enterprise 6TB model. Like its smaller brother, the 8TB model is built to provide optimum performance in an NAS environment; that is, sustained performance and 24×7 access.

The Seagate Enterprise NAS is the company’s purpose-built line of HDDs to address mid-range NAS, server and cloud storage use cases. For this review, we will be looking at the 8TB model, which is Seagate’s most recent addition to the Enterprise portfolio and 2TB more in storage capacity than the previously reviewed Seagate Enterprise 6TB model. Like its smaller brother, the 8TB model is built to provide optimum performance in an NAS environment; that is, sustained performance and 24×7 access. 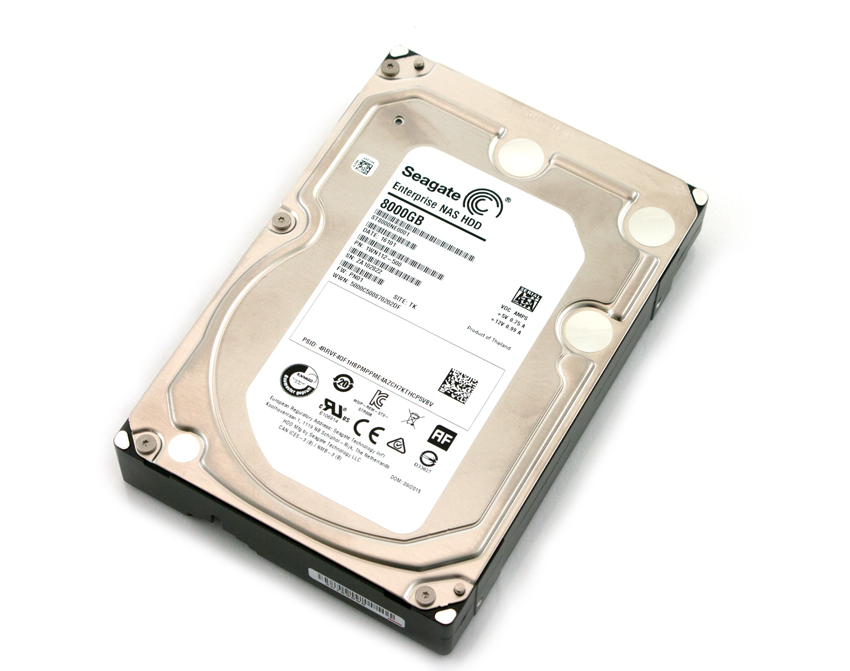 Like the smaller capacities, Seagate’s new NAS HDD is equipped with a 7200-RPM spindle, which allows it to excel in raw, sustained throughput performance. In addition, it features 256MB cache (doubling that of the 6TB model) and NAS-optimized firmware for balanced reads and writes. In addition, Seagate indicates that, due to the 33% increase in storage capacity, businesses can reduce rackmount storage costs by decreasing the number of required enclosures and drives as well as reduce storage footprint and thus power consumption. The Seagate Enterprise NAS also features advanced power management, allowing businesses to use numerous power profiles for low power consumption.

Even though these drives are designed for optimal reliability and longevity, unexpected things can happen that lead to drive failure. To remedy this, the Seagate is offering its extensive Rescue Data Recovery coverage, which is an optional service for rack-mount or tower NAS solutions populated with their Seagate Enterprise NAS HDDs. Users of these drives will be able to recover from unfortunate events including RAID controller failures, missing RAID configurations and partitions, power surges that cause multiple drive failures simultaneously, virus damage, and natural disasters. The Seagate plan also covers accidental damage and human error, which adds even more peace-of-mind protection. With this coverage, Seagate asserts that most data can be recovered in-lab with a nearly 90% success rate. 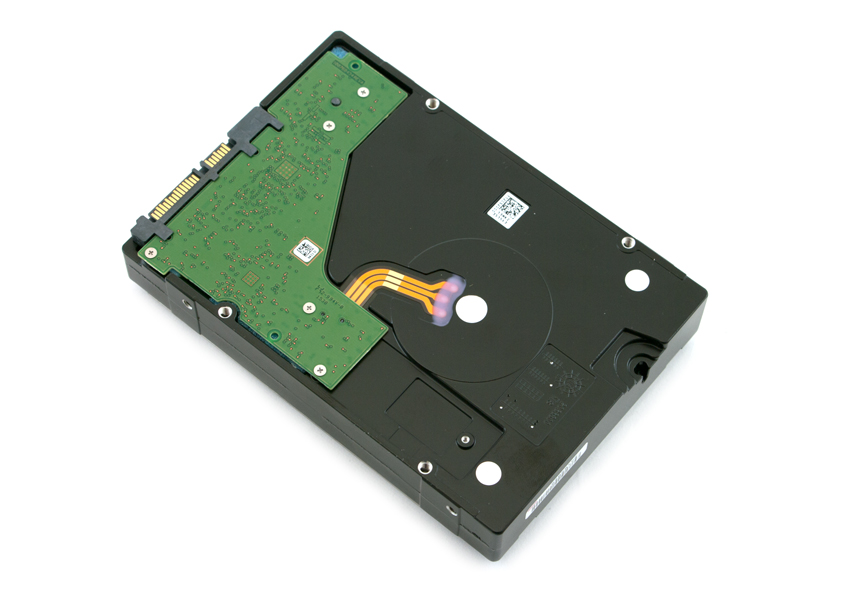 Backed by a 5-year warranty, the Seagate Enterprise NAS HDDs are available variety of capacities: 2TB, 3TB, 4TB, 5TB, 6TB, and 8TB. We will be looking testing the eight of the 8TB drives inside a Synology DiskStation DS1815+.

In the following section of this review, we will show the performance of both iSCSI and CIFS configurations of the Seagate Enterprise NAS 8TB. Seagate supplied StorageReview with eight samples of their new HDDs, which we configured in RAID10 in a Synology DiskStation DS1815+.

Looking at throughout in our first test measuring 4K random performance (CIFS), the Seagate Enterprise NAS 8TB drive showed the best read activity with 652 IOPS while having the 3rd strongest write activity at 1,972 IOPS. The top performer in the write column was the WD Red Pro 4TB capacity.

With our iSCSI block-level test, the Seagate Enterprise 8TB couldn’t quite overcome its small capacity brethren, boasting write and read activity with 1,493IOPS and 3,201IOPS, respectively. These results placed it in 2nd spot among the comparables in read and 3rd in write.

In our max latency tests (CIFS), the Seagate Enterprise 8TB posted top read activity with 2,145.7ms; however, it recorded the slowest maximum write latency at 3,168.7ms (by a significant margin). The top write latency goes to the WD Red Pro with 914.01ms.

When looking at the same test using iSCSI, the Seagate Enterprise NAS 8TB posted top read and write max latency with 618.7ms and 947.5ms, respectively. This was a significant improvement over the 6TB model, which posted 931.5ms read and 1,271ms write.

Calculating each of the drive’s standard deviation for the 4k latency show us how consistent the latency results were within each of the categories during our above benchmarks. During our CIFS connectivity test, the Seagate Enterprise NAS continued its trend in great read consistency with 505.06ms though write activity was one of the higher recorded results with 197.80ms. The top write performer was the WD Red Pro 4TB.

Switching to the iSCSI block-level test, the 8TB Seagate Enterprise NAS was just behind the 4TB model in reads (66.46ms); however, it recorded the best write activity with 131.10ms. The next best performing drive in this category had 193.04ms (WD Red Pro 4TB).

Our next test shifts focus from a pure 4K random read or write scenario to a mixed 8K 70/30 workload where we will show how performance scales in a setting from 2T/2Q up to 16T/16Q. The Seagate Enterprise 8TB was the weakest performer by far during this benchmark (CIFS) at a maximum IOPS of roughly 450, while the 6TB model posted the best overall performance. 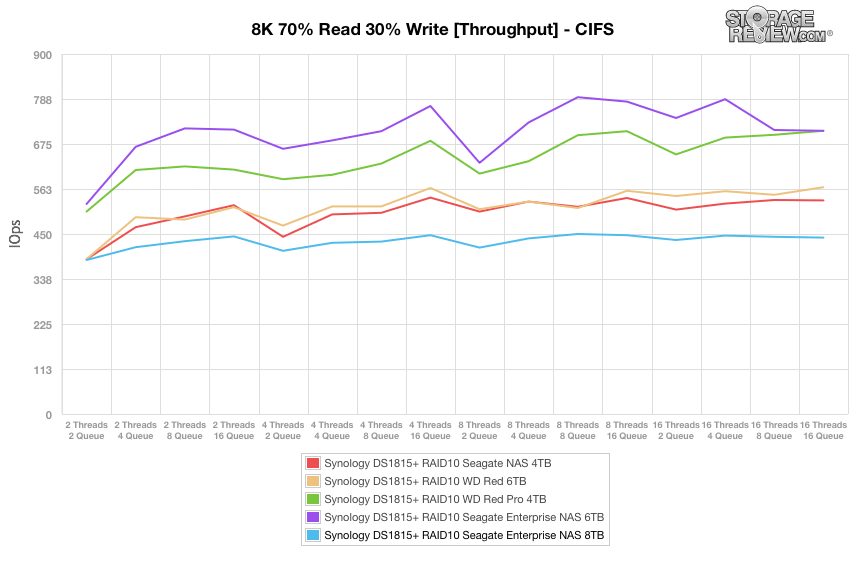 When looking at the iSCSI block-level test, the Seagate Enterprise 8TB showed completely opposite results, as it was the top performing drive and eventually finishing at roughly 2,275 IOPS. The 6TB model was hot on its trail throughout, however. 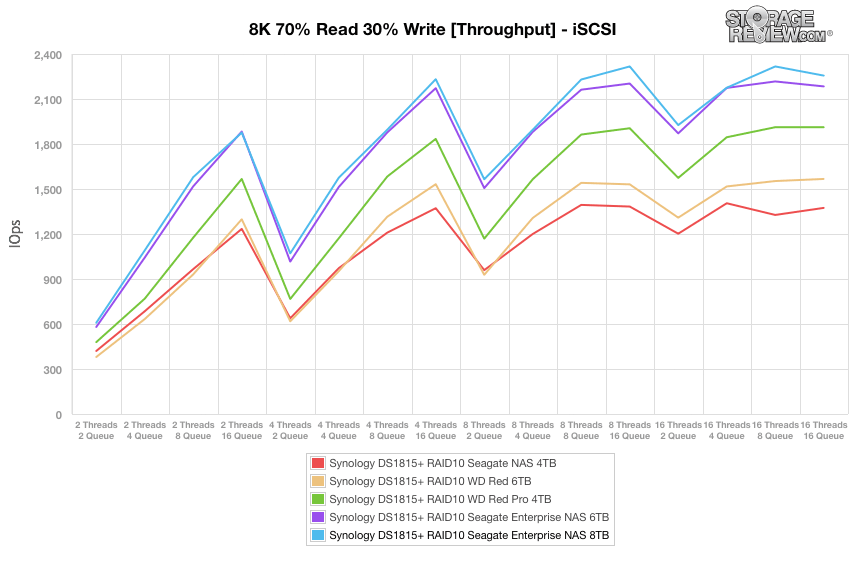 In our average latency test for mixed 8K 70/30 workload, the Seagate Enterprise showed the weakest performance during CIFS, reaching latency of just under 690ms by the terminal. The 6TB model was once again the top performer during our file-level test. 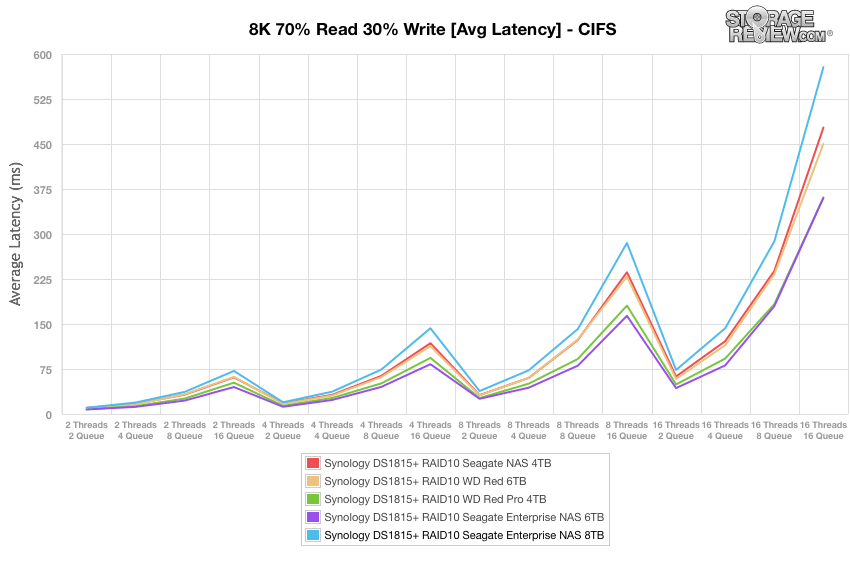 As was the case with the throughput benchmark, our average latency benchmark showed much better results during the iSCSI block-level test. Here, the Seagate Enterprise was the top performing drive once again posting an average latency of approximately 113.15ms by 16Q/16T. 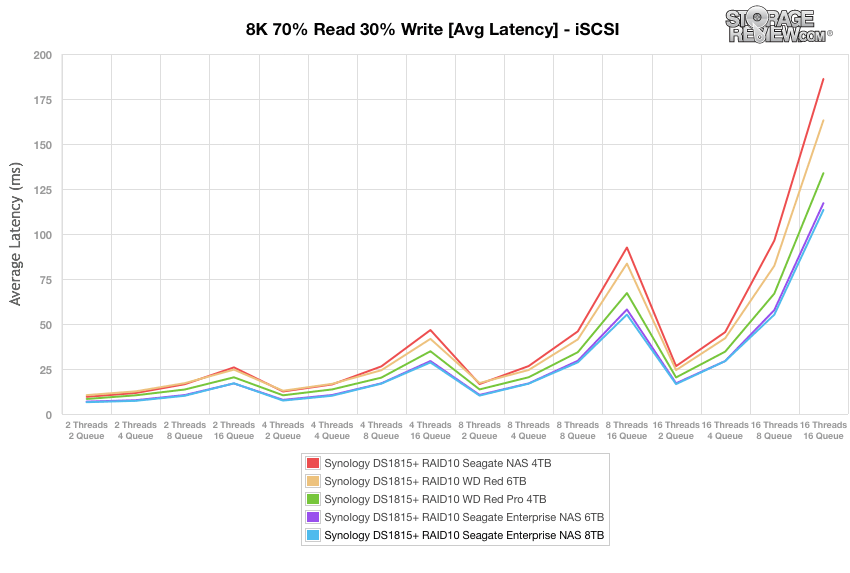 Our max latency test (CIFS) showed unstable results across the board. Though it had the slowest start, the Seagate Enterprise was actually the most consistent drive throughout the benchmark and posted the lowest latency by the terminal (~2,400ms). 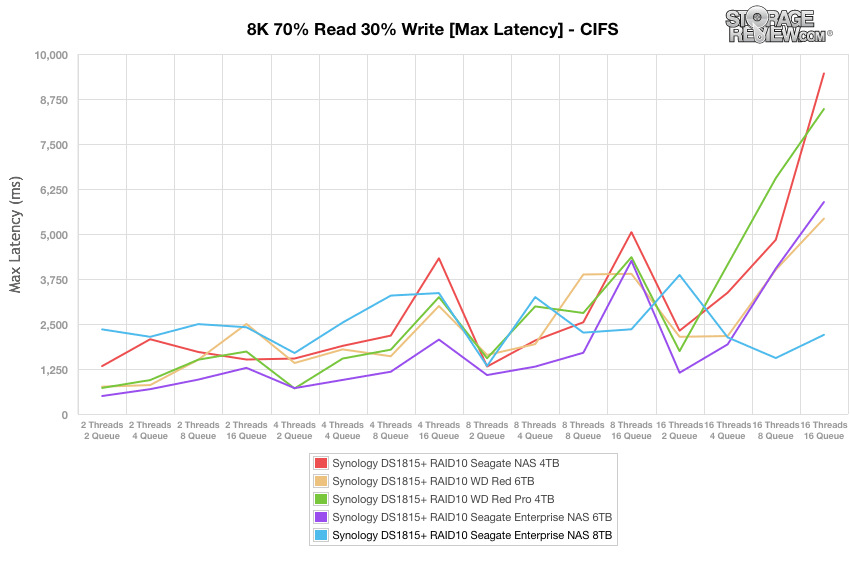 Results were also inconsistent when looking at our iSCSI block-level test. Here, the 8TB Seagate Enterprise finished off with a maximum latency of 1,400ms, which was good for 2nd place behind the WD Red Pro, which posted 1,243.4ms. 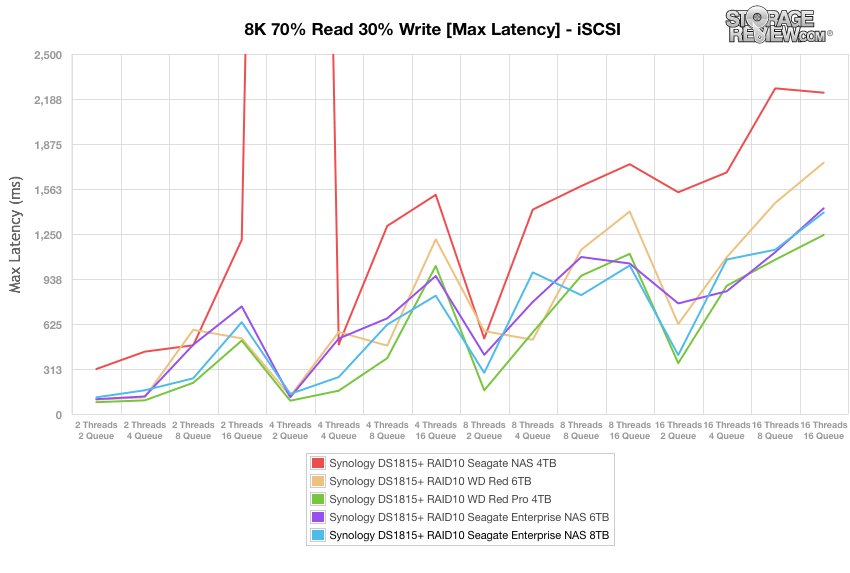 The standard deviation chart for latency during our 8k 70/30 benchmark CIFS file-level test show the 8TB Seagate Enterprise as the clear winner with roughly 320ms in latency. The 6TB model wasn’t too far off with 372.29ms. 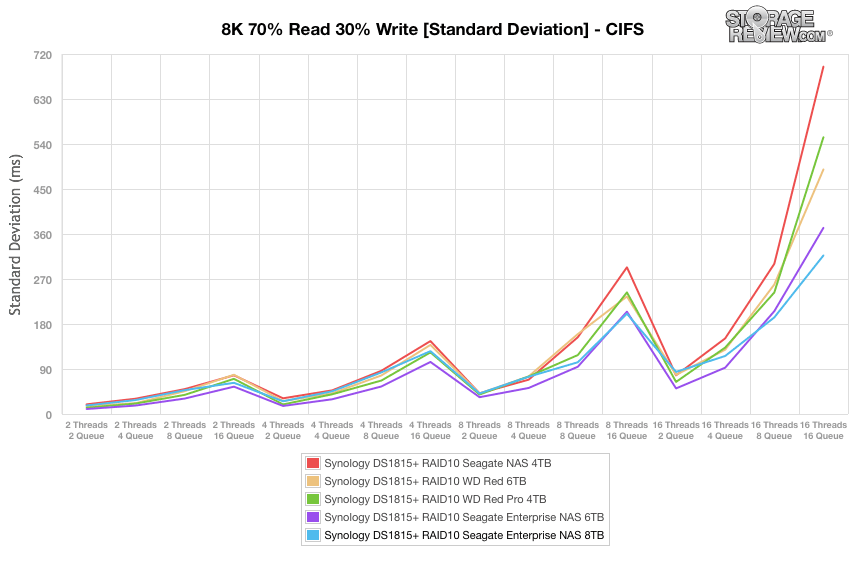 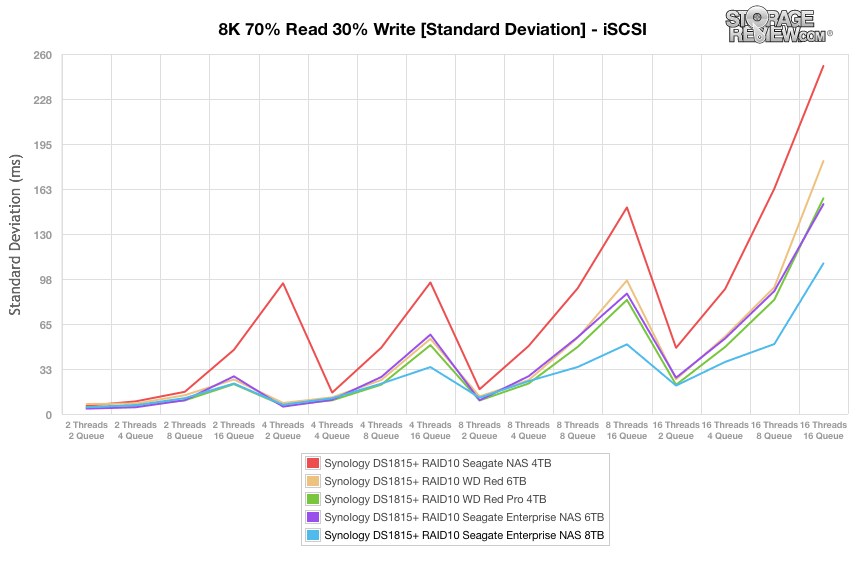 While the first part of the workload comparison focused on random workload performance, our second half measures small and large-block sequential transfer speeds. In our CIFS file-level test of the 8k 100% read/write benchmark, the majority of the drives posted virtually identical results; however, the 8TB Seagate Enterprise stood out in read performance with 57,140 IOPS.

Our last test is the 128k benchmark, which is a large block sequential test that shows the highest sequential transfer speed. Here (CIFS), all of the drives posted virtually identical results; however, the Seagate Enterprise found its place at the bottom of the pack (but not by much) with 462.7MB/s read and 438.2MB/s write.

In our iSCSI block-level test, however, the Seagate Enterprise 8TB took a massive lead in read activity over the other drives with an impressive 460.1MB/s read (more than doubling the rest). The next highest performing drive was the 6TB model, which posted 193.92MB/s.

The Seagate Enterprise 8TB is the latest addition to the proven line of NAS hard drives, all of which are built to handle virtually any type of NAS environment, anywhere from smaller NAS form factors like the Synology Diskstation DS1815+ to 16-bay rack units. The Seagate Enterprise 8TB is also equipped NAS-specific firmware, advanced reliability features, and a 7.2K spindle speed, allowing it to excel in 24 hour, 7 days a week operation. In addition to the gracious 5-year warranty on the drive, Seagate has added even more peace of mind by bundling the 8TB model with their Rescue Data Recovery Service. As we stated earlier, this is an effective service for any rack-mounts or towers that are populated with their Seagate Enterprise NAS HDDs, allowing users to recover from unforeseen events such RAID controller failure, power surges and natural disasters. Seagate goes as far as saying that most data can be recovered with almost a 90% success rate.

To show how the 8TB Seagate drive performs in a variety of workloads and scenarios, we leveraged the 8-bay Synology DS1815+ and compared it against several other NAS drives of its class including a 6TB model and the WD Red line. When looking at the details of the results, though a bit uneven at times, the Seagate Enterprise NAS 8TB was the best overall performing drive. The 8TB Seagate Enterprise was the top performer in our 4K random performance benchmark during the CIFS file-level test, which included a leading 652 IOPS read and 392.16ms in average latency. Though it performed well during the iSCSI block-level tests of the same workload, it fell behind the 6TB capacity in throughput and average latency.

During our mixed 8K 70/30 workload benchmarks, the 8TB Seagate Enterprise NAS HDD was consistently the top performer during iSCSI, highlighted by 2,275 IOPS and 113.15ms in throughput and average latency, respectively; however, it showed performance at the bottom of the pack in those categories during our CIFS test.

Looking at its performance during our large block sequential 128k benchmark (CIFS), the Seagate Enterprise placed at the bottom of the pack with 462.7MB/s read and 438.2MB/s write; however, the performance disparity between the all the tested drives were essentially negligible. In our iSCSI block-level test of the same benchmark, the Seagate Enterprise 8TB boasted top read activity (by a significant margin) over the other drives with an impressive 460.1MB/s read, which more than doubled the comparables. The next highest performing drive was the 6TB Seagate Enterprise model, which posted just 193.92MB/s.

Along with its fantastic performance and great reliability features, the 8TB Seagate Enterprise HDD offers businesses massive storage capacity, which helps to optimize both storage footprint and power consumption.