The WD My Cloud EX4 is a four-bay NAS designed for power users and small offices that builds on WD's new My Cloud platform. With a full array of applications and easy-setup design, the My Cloud EX4 offers a feature-rich, stable, and secure network storage solution of up to 16TB. Building on the design philosophy of its smaller sister, the EX4 retains the My Cloud's ease of use while offering an expansion of up to 4 total bays, a dual power supply, and additional data management features. WD aims to make the EX4 a performer as well, with a 2.0GHz processor, 512MB onboard memory, and dual Ethernet ports (which provide link aggregation, allowing for transfer increase and redundancy).

The WD My Cloud EX4 is a four-bay NAS designed for power users and small offices that builds on WD's new My Cloud platform. With a full array of applications and easy-setup design, the My Cloud EX4 offers a feature-rich, stable, and secure network storage solution of up to 16TB. Building on the design philosophy of its smaller sister, the EX4 retains the My Cloud's ease of use while offering an expansion of up to 4 total bays, a dual power supply, and additional data management features. WD aims to make the EX4 a performer as well, with a 2.0GHz processor, 512MB onboard memory, and dual Ethernet ports (which provide link aggregation, allowing for transfer increase and redundancy). 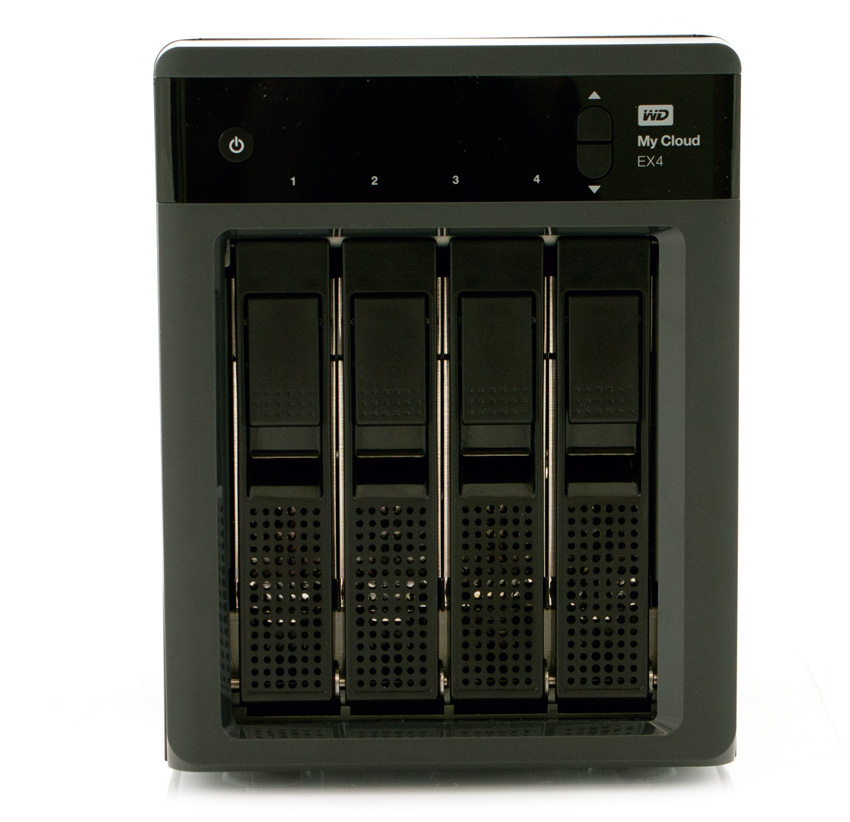 Unlike its smaller single-bay companion, the EX4 offers users a degree of security against data loss with support for RAID 0, 1, 5, and 10, as well as spanning and JBOD modes. The unit also comes in a variety of prepackaged models, utilizing WD Red HDDs: 8TB, 12, and 16TB. Additionally, WD offer a drive-less package for those who wish to operate their own drives (WD or otherwise), or add them a la carte as storage needs grow. The drive bays themselves offer a sleek toolless design and allow fast hot swapping, making installation and expansion a snap. The EX4's storage capacity can be further extended by attaching compatible USB 3.0 external drives in either of the unit's two USB ports.

The all-metal WD My Cloud EX4 sticks with WD's sleek, simple design philosophy. The front of the unit features a central LCD status screen in cool blue, centered on a strip of glossy black finish. To either side of the screen are the power button and status light, and up/down selection arrows for controlling the readout on the status display. Immediately below are four blue LED status lights, each assigned to one of the four drive bays. Below the control panel are the four tool-less, hot-swappable bays themselves (which, depending on model, are empty or come with WD Red HDDs). WD touts the minimal effort required to change drives with the EX4: it really is just a matter of pulling a latch and out pops the drive. 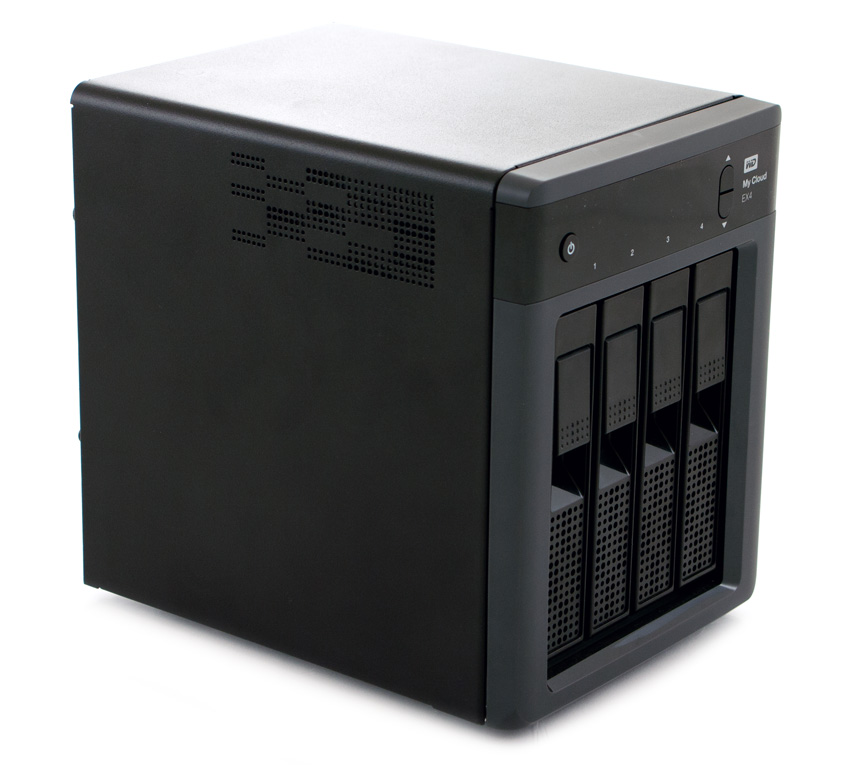 A series of ventilation holes lines either side of the unit, while the rear contains both USB 3.0 and Ethernet ports, dual power supply plugs, and the system fan. 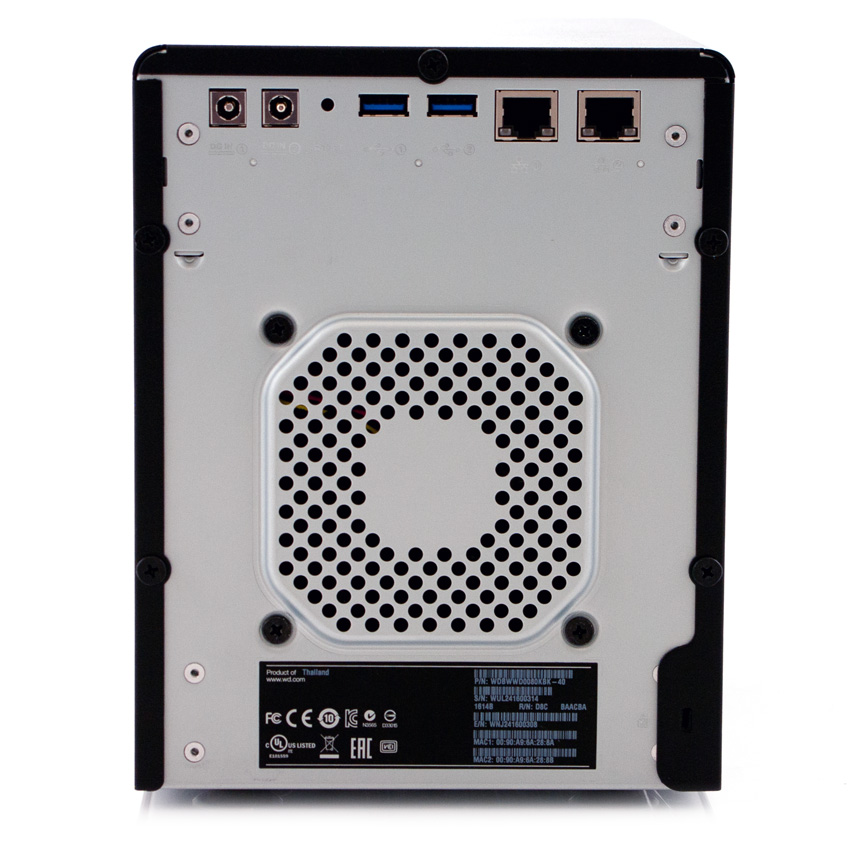 The minimalistic, streamlined user interface is one of the My Cloud's major selling points. The calm, dark interface speaks to next-generation design and simplicity, presenting the user with valuable information without the risk of clutter or aesthetic overload. Dominating the left portion of the screen is a simple view of remaining free capacity on the NAS, while the right panel provides a quick glance at system diagnostics and firmware version. Simple indicators for network activity, resource monitoring, cloud devices, user accounts, and active applications line the bottom of the dashboard, while a ribbon at the top provides easy access to more advanced utilities and applications. 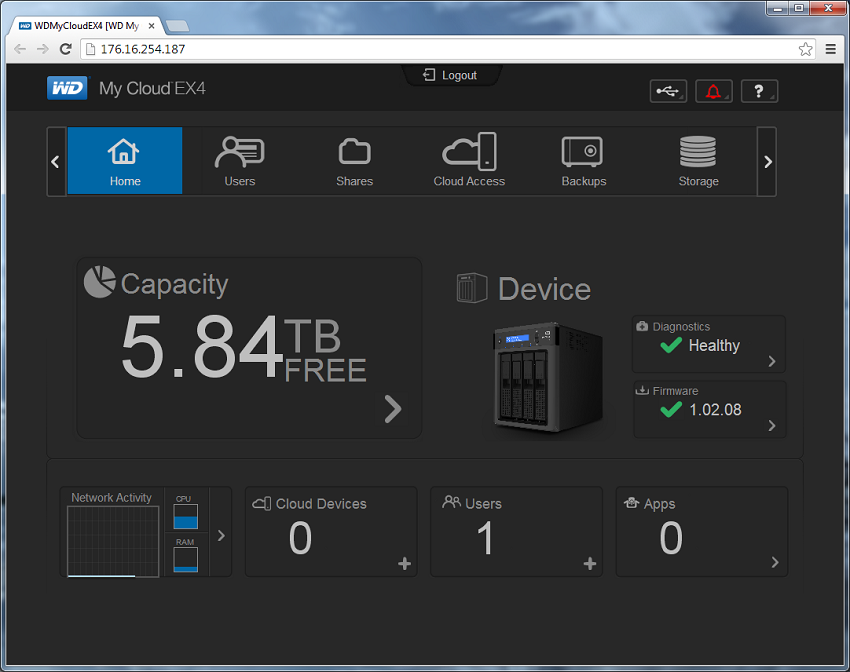 The EX4 benefits from WD's My Cloud series of mobile and desktop applications, allowing the user to access, modify, and share data on-site or remotely, while also providing the administrator with tools for remote user and energy management. My Cloud also supports email and mobile alerts, keeping the user or administrator up-to-date on the system's status and performance. 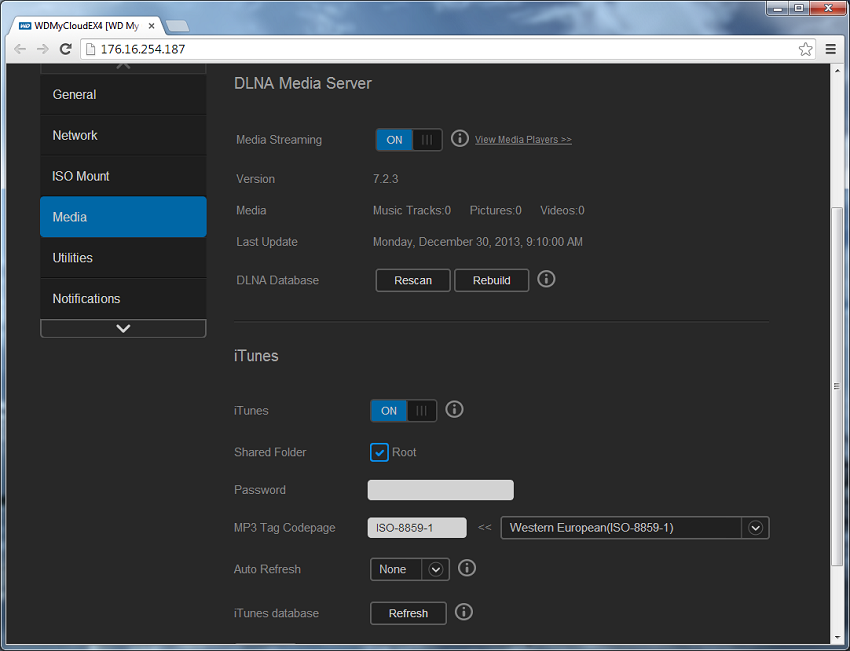 Strong support for streaming media will appeal to the user with a large audio/video library. The EX4 is capable of streaming video and photos to several connected devices (TVs, game consoles, devices with DLNA/UPnP support) thanks to the unit's Twonky 7.2 and DLNA-certified 1.5 media servers. The EX4 is also a powerful iTunes server, allowing the user to easily manage and utilize a large music library. Multiple third-party applications are also currently available (with more to come) to enhance the My Cloud EX4's impressive built-in functionality, including: aMule and Transmission for peer-to-peer downloading, the IceCast internet music streaming utility, Wordpress, phBB, phpMyAdmin, Joomla, Logitech SqueezeCenter, and NZBGet. 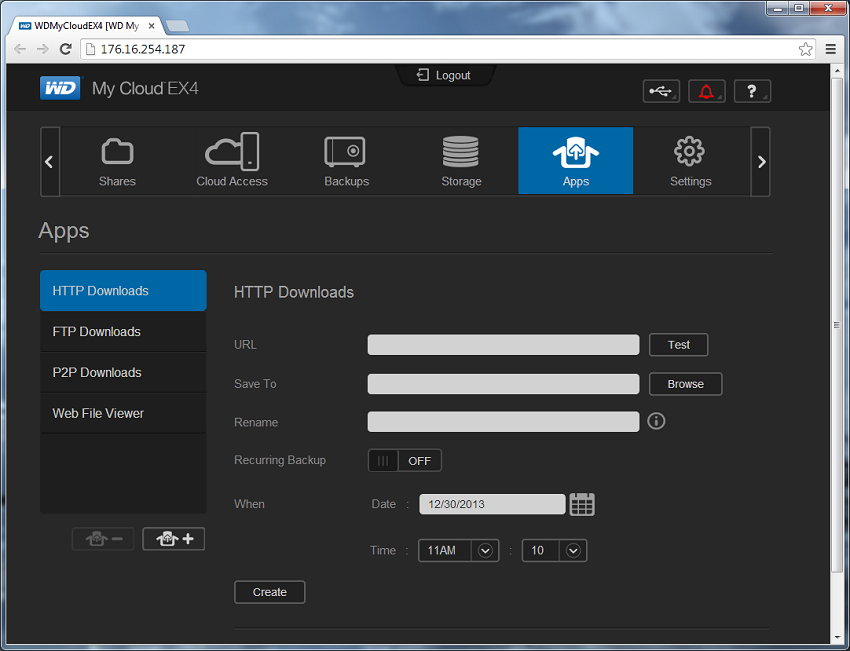 As a file server, the EX4 offers a cross-platformed shared space for both Windows and Mac OS users to collaborate. Integrated Microsoft Active Directory support allows the administrator to easily setup and maintain user accounts and permissions. The administrator is not only able to determine folder access, but also cap the maximum amount of storage users on the system are permitted to access. The EX4 can also function as a full-featured FTP server, allowing the administrator to create and monitor FTP accounts and access permissions, throttle bandwidth, manage IP blocking, and take advantage of FXP. The unit also features a P2P BitTorrent server and HTTP download support, allowing the user to download files from the internet directly to the NAS. 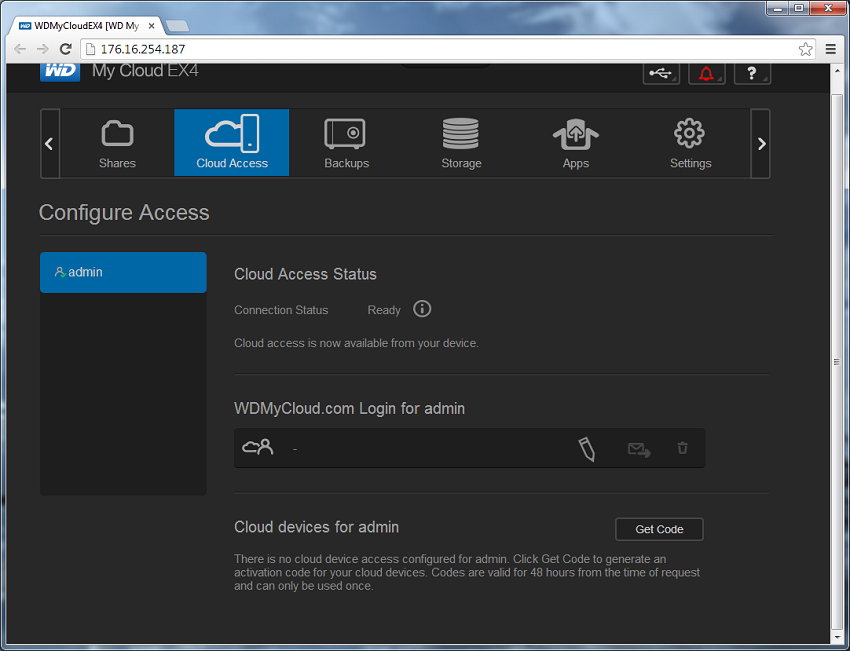 The EX4 provides both a stable backup platform for machines in a cross-platform environment. Windows users can take advantage of WD SmartWare Pro (with the 10 included user licenses) to schedule and manage system backups, while Apple users enjoy native Time Machine support. In addition to allowing for backup over LAN/WAN, the EX4 also supports popular commercial cloud backup services (ElephantDrive, Amazon S3) to add an additional layer of protection against accidental loss. For added security, the EX4 offers the administrator the ability to password encrypt entire volumes, allowing for controlled access.

We tested both SMB and iSCSI performance using RAID 5 and RAID 10 configurations of the WD Red, a 3.5" 5400 RPM drive which ships with the WD My Cloud EX4 (unless you buy the diskless version). It should be noted that the models shipped with WD Red HDDs come already preconfigured for RAID 5.

Our standard StorageReview Enterprise Test Lab regimen runs the device through its paces with a battery of varying performance levels and throughput activity workloads. For the WD My Cloud EX4, the following profiles were utilized to compare performance between different RAID configurations and different networking standard protocols (SMB and iSCSI):

Our first testing benchmark measures 4K performance at 100% read/100% write activity. The clear performer for write activity is the RAID 10 configuration in both SMB and iSCSI, pulling 645 and 371 IOPS respectively. For read performance, the difference between RAID 5 and RAID 10 in SMB is negligible, while RAID 5 iSCSI solidly outperforms RAID 10 at 321 IOPS.

In terms of maximum latency, the SMB configurations provide the most balanced results. The RAID10 SMB registered maximum latency at 2,955ms read/3,677ms write, while the RAID5 SMB reports slightly better max read latency at the cost of a large increase in max write latency. In general, maximum read latency across all configurations is largely equal, while the max latency for both iSCSI drives skyrockets over the SMB counterparts.

The next section compares the 100% 16 thread/16 queue workload with a mixed profile of 70% read/30% write across a wide range of thread/queue combinations, from 2/2 all the way to 16/16. In the first mixed profile test, the RAID10 iSCSI configuration is the clear performer, while the SMB configurations remain largely indistinguishable from one another in terms of performance. 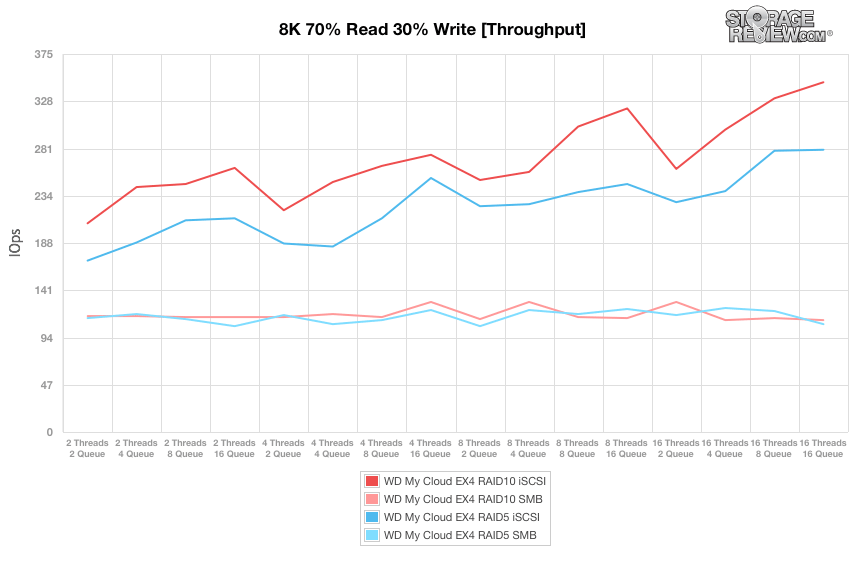 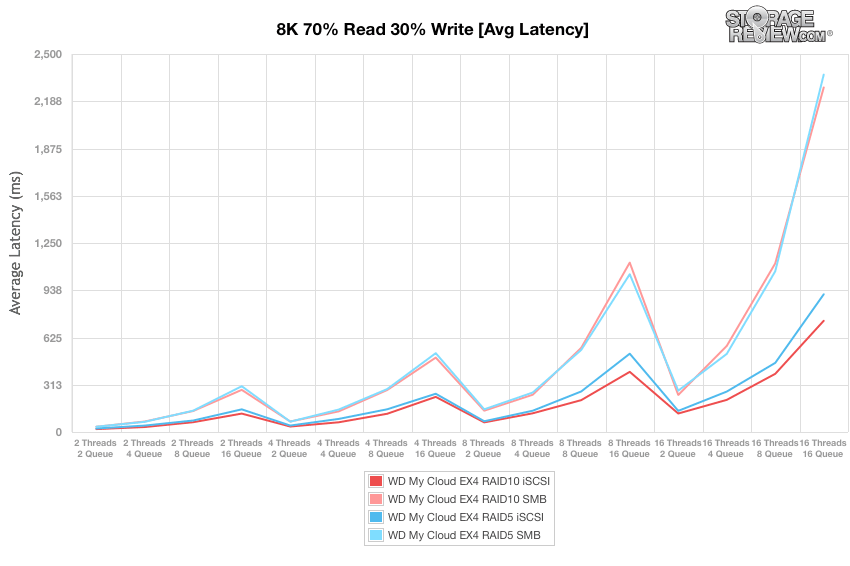 When measuring maximum latency, in general the performance remains relatively stable until 16 threads/8 queue, with the notable wild exception of the RAID5 SMB drive. This drive offers generally the highest maximum latency at nearly every level, with the exception of 8 thread/2 queue, where it nosedives down to provide the lowest max latency figures. 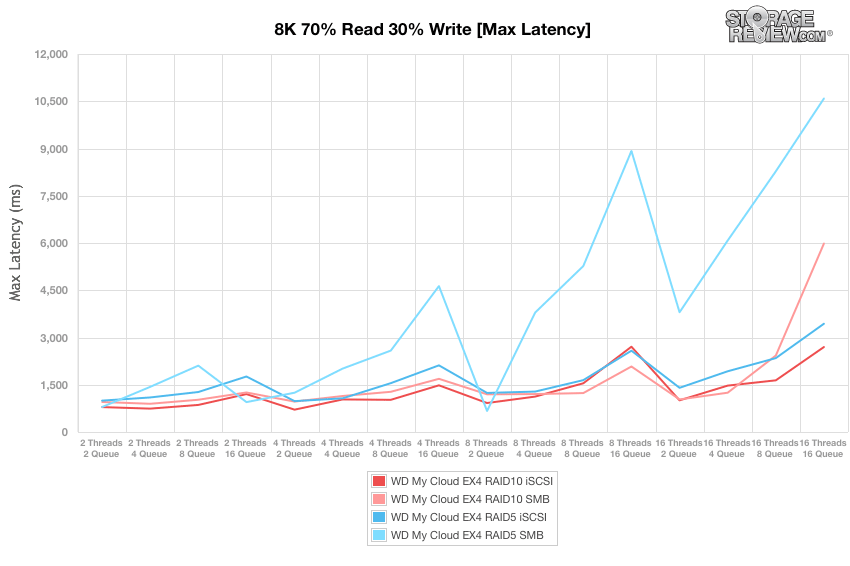 There are few surprises when measuring the standard deviation between the four configurations in the 8k 70/30 test. In general, the RAID10 drives offer the lowest deviation (with SMB consistently the lowest), while both RAID5 configurations jockey for the highest position. 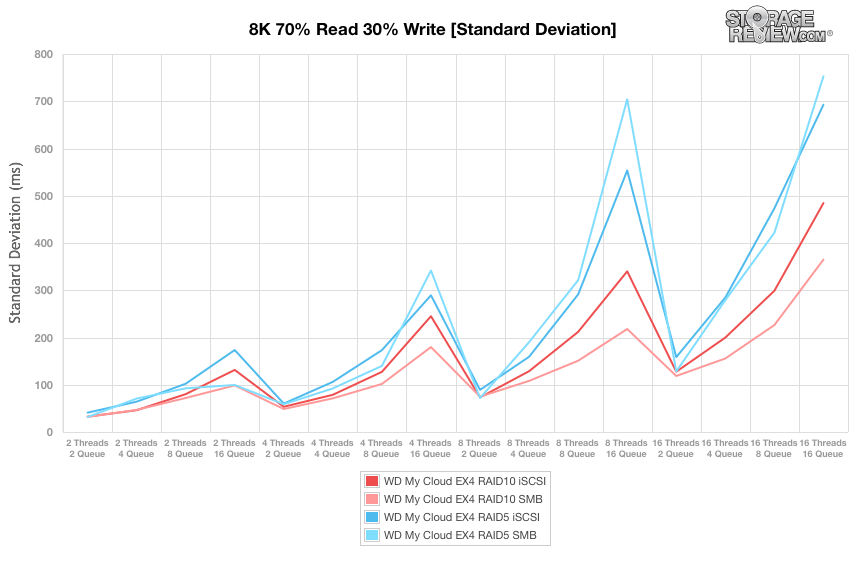 The next test again puts the drives under 100% read/write activity, this time at 8K sequential throughput. Here, the differences in write activity throughput between RAID 5 and RAID 10 are slim enough to be inconsequential. The story is similar for read activity, though using SMB the RAID 5 offers slightly better IOPS than its RAID 10 counterpart at 5156 IOPS.

The final testing benchmark is the 128K transfer test, which aims to demonstrate the highest sequential transfer speed available. In all cases the SMB configurations outperformed iSCSI, with RAID 10 SMB sacrificing the lead in read speed for a clear advantage in write ability. In iSCSI configuration, both RAID 10 and RAID 5 configurations were functionally identical.

The WD My Cloud EX4 definitely has the advantage of ease of use, simplicity, and low cost compared to other NAS solutions in its class. For home users, getting a quality storage solution set up on a network should only take a few minutes after unboxing the unit, and in minutes everyone in your household can be set up with cloud storage accessible from anywhere (though if you go for the driveless model, you will also need to set up your drives and RAID configuration yourself beforehand). For the power home, the WD My Cloud EX4 is a solid addition to the My Cloud line. Unfortunately, its business applications are more limited, and really only meant for small offices with simple shared storage needs. That being said, the dual power/Ethernet plugs will appeal to the small office IT admin with redundancy and link aggregation in mind.

The EX4 does draw a degree of criticism over its performance speed, which could be a bit better compared to other similarly-designed competitor models for SOHO use. That being said, the My Cloud EX4's price point and quality of life features more than make up for any possible performance shortfalls. That's WD's key point with this system, for a home or small office with a hdnful of users, the My Cloud EX4 delivers enough performance, but really excelles in configuration and ease of use. For power users who need more, WD of course has that in their growing Sentinel line of SMB NAS products.

The WD My Cloud EX4 is a solid, attractive, and easy-to-use NAS solution for homes and small offices, providing all the consumer-level bells and whistles of a larger media center unit while maintaining a modest price point.

WD My Cloud at Amazon