The My Cloud Pro PR4100 is the company's premium 4-bay NAS solution designed for creative teams and small businesses looking to streamline their workflow. This versatile NAS features multiple RAID configurations, password protection, 256-bit AES volume encryption and upwards of 32TB in storage capacity. Though the PR4100 enters a flooded SOHO NAS market, its ease of use through software, such as the WD SmartWare Pro and the My Cloud dashboard, help it to stand out among its competition. Users can also leverage the PR4100 to remotely edit, save and share their projects using the My Cloud mobile app for Android and iOS.

The My Cloud Pro PR4100 is the company's premium 4-bay NAS solution designed for creative teams and small businesses looking to streamline their workflow. This versatile NAS features multiple RAID configurations, password protection, 256-bit AES volume encryption and upwards of 32TB in storage capacity. Though the PR4100 enters a flooded SOHO NAS market, its ease of use through software, such as the WD SmartWare Pro and the My Cloud dashboard, help it to stand out among its competition. Users can also leverage the PR4100 to remotely edit, save and share their projects using the My Cloud mobile app for Android and iOS. 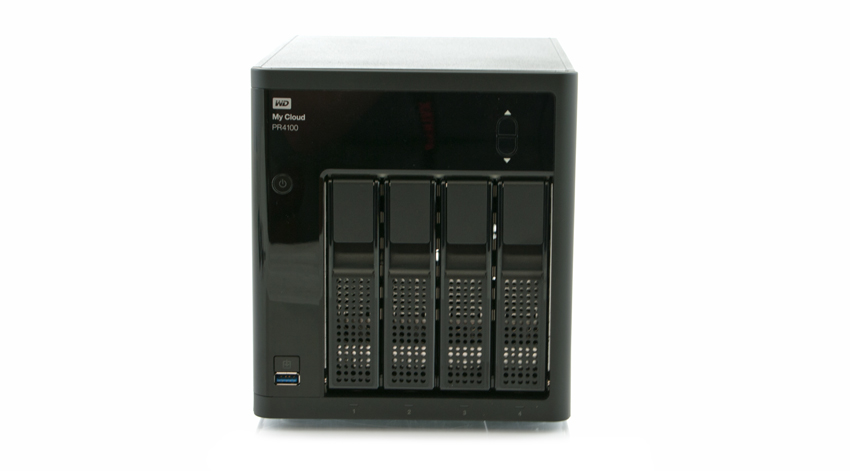 WD has also equipped the PR4100 with built-in hardware transcoding, which allows it to stream media using the correct format and quality. Moreover, the 4-bay NAS is compatible with an array of popular applications, such as Plex, Milestone Arcus Surveillance, Dropbox, and WordPress, adding a ton of flexibility and potential for a lot of customization. The PR4100 is exFAT compatible as well, so users can simply plug in their external hard drive or camera via the USB 3.0 port and quickly back up their device to the NAS.

Like most WD solutions, the PR4100's simple, yet sleek design acts as a nice companion beside any workstation. The compact, all-black My Cloud PR4100 is just 5.82 inches tall and 4.28 inches wide and looks almost identical to the EX4100, only with more functionality on the front panel. This includes power and USB copy buttons, a USB 3.0 port, and four drive bay status LEDs. 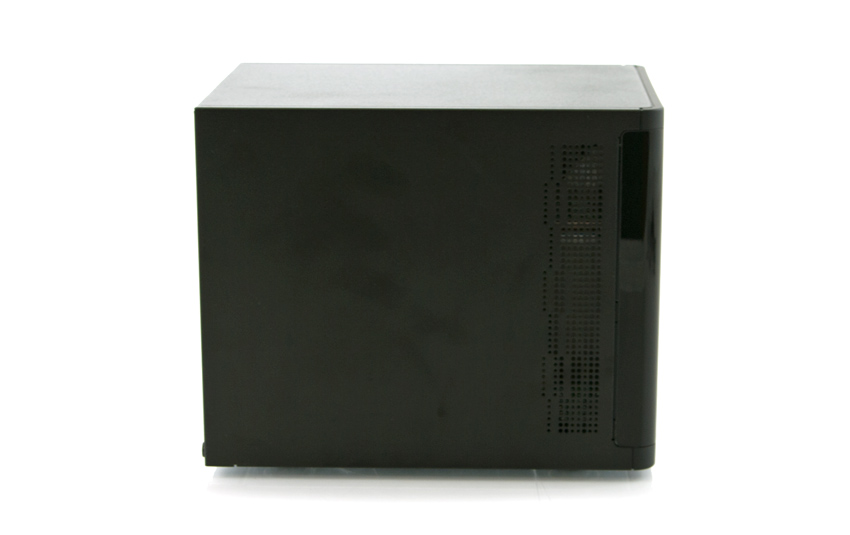 The front panel is also equipped with a Status LCD display at the top center, which uses the scroll buttons on the left for easy navigation. The Status LCD gives useful information about the WD NAS such as the IP address and drives statuses, and can be disabled to save power.

The majority of front panel is taken up by the four tool-less/tray-less 3.5-inch drive bays, all of which are accessed by easy-to-open drive doors–simply pull the handle and you can quickly remove and install a drive. Businesses and individuals should note that you can’t lock the bays with a key; however, the drives feel very secure once they are snapped into place and the doors are closed.

Most of back panel’s real estate is home to the system’s ventilation for the system fan, which helps to keep the NAS running smoothly. It is a very quiet device. The connectivity/functionality is located along the right side, consisting of a reset button, a USB 3.0 port, two Ethernet ports, and two external DC-in power ports. The Kensington Security Slot is placed at the bottom left of the back panel. 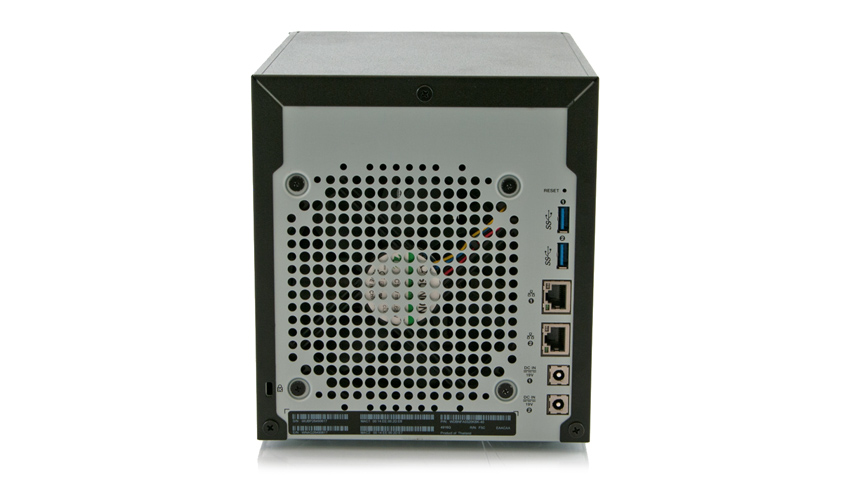 The WD My Cloud Dashboard provides users with access to the device's internal settings, options, and features, and there is no question that it is one of the more simple and intuitive NAS operating systems out there. To set it up, simply attach the PR4100 to the same network of computer you wish to access it from and type the name or IP Address of the My Cloud device into a web browser. The Dashboard should now appear.

The My Cloud OS can also be accessed on the go via a mobile app (iOS and Android), giving access all your content from anywhere at any time, as well as the ability to back up photos and videos from your tablets and smartphones.

The Dashboard interface is very easy to use and has a clean, yet colorful, layout. All available options are nicely laid out along the top for seamless navigation. 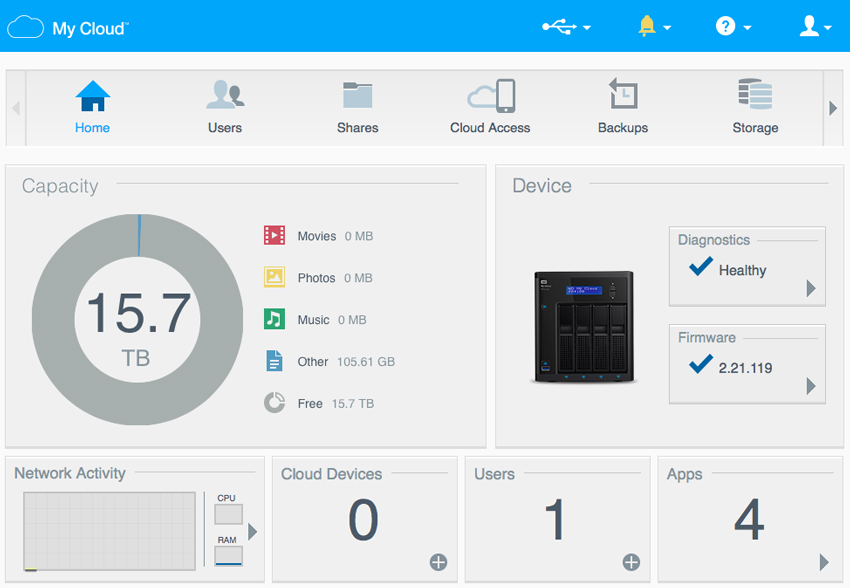 Clicking the Storage button displays the disk profiles populated inside your My Cloud Pro PR4100 (in our case, four 8TB WD Red drives) and displays useful information about the current status of each drive. 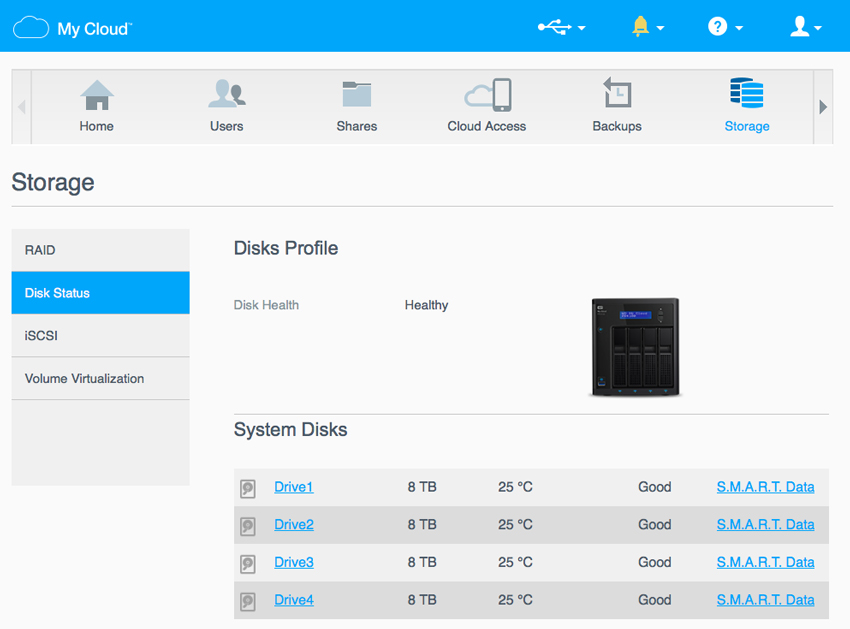 Read our full WD My Cloud OS 3 Review for an in-depth analysis on this intuitive software.

We will be testing the My Cloud PR4100 in RAID10 (iSCSI and CIFS) and will be comparing it to the following NAS drive and configurations:

In the first of our enterprise workloads, we measured a long sample of random 4k performance with 100% write and 100% read activity. In this scenario, the My Cloud PR4100 showed a significant improvement on the EX model in write activity with 708 IOPS (iSCSI block-level storage) and 720 IOPS (CIFS file-level storage). In reads, the PR4100 gave us 353 IOPS (iSCSI) and 335 IOPS (CIFS).

Looking at average latency showed the PR4100 with similar results between iSCSI and CIFS connectivity. In writes, we measured 361.21ms in iSCSI and 355.47ms in CIFS while reads hit 724.90ms and 761.52ms, respectively. The top performing EX configuration was in RAID5 iSCSI with 1,028.19ms in reads (though it had significantly higher write latency with 2,071.47ms).

In our max latency benchmark, the WD PR4100 recorded its best read performance during our RAID10 iSCSI configuration, posting 1,828.3ms. The WD NAS had its best performance in writes when configured in CIFS (1,379,8ms).

Calculating standard deviation during our random 4k performance benchmark showed the WD PR4100 with its best read performance when configured in iSCSI (RAID10) where it measured 459.38ms. The CIFS configuration slipped in performance slightly, as the EX4100 (CIFS) showed better read performance with 607.9ms versus 513.44ms of the PR4100.

Compared to the fixed 16 thread, 16 queue max workload we performed in the 100% 4k write test, our mixed workload profiles scale the performance across a wide range of thread/queue combinations. In these tests, we span workload intensity from 2 threads and 2 queue up to 16 threads and 16 queue. As demonstrated below, the PR4100 configurations performed significantly better than the EX configurations, peaking at 445 IOPS. 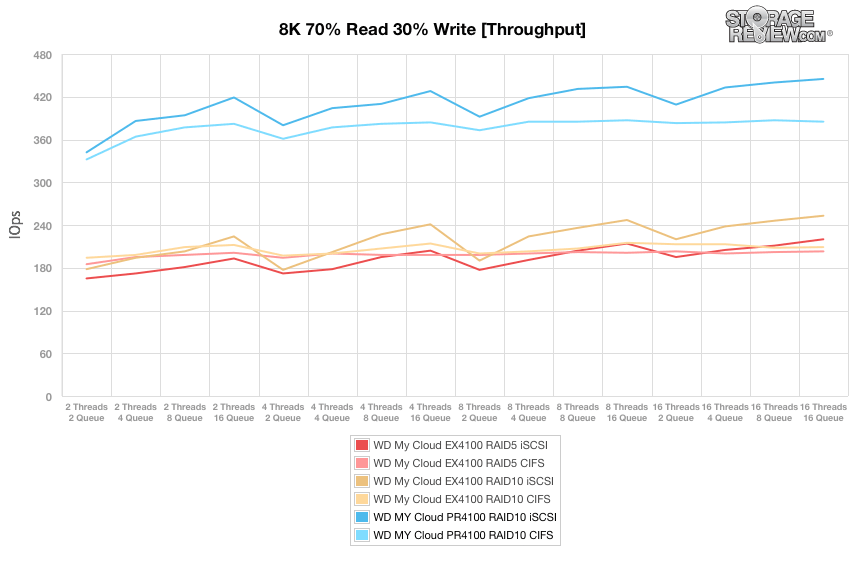 Results told a similar story when looking at average latency, as the PR4100 configurations continued to show a significant improvement on the EX model. iSCSI and CIFS showed near identical performance throughout the test until the very end of the queue depths, where the former showed 574.23ms vs the latter’s 661.4ms. 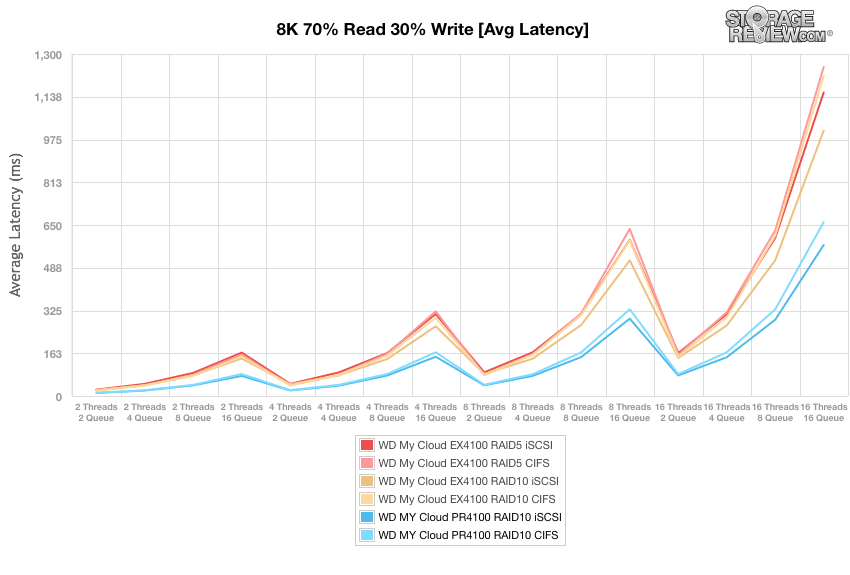 In our maximum latency benchmark, the WD PR4100 showed its best performance when configured in CIFS, posting a range of 493.81ms to 3297.73ms. The two RAID10 EX4100 configurations were actually noticeably more consistent than the PR4100 in iSCSI. As expected, the RAID5 configurations showed very uneven performance. 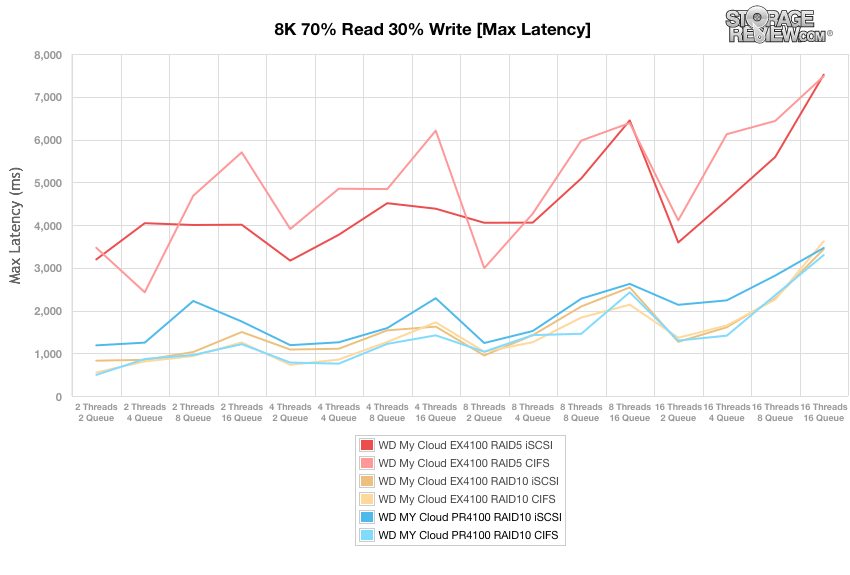 When looking at standard deviation, the PR4100 showed its best performance (by the final queue depths) when configured in iSCSI, posting a range of 25.37ms to 421.6ms. In the CIFS protocol, the PR4100 started out stronger, but fell behind by the end with a latency of 493.51ms. 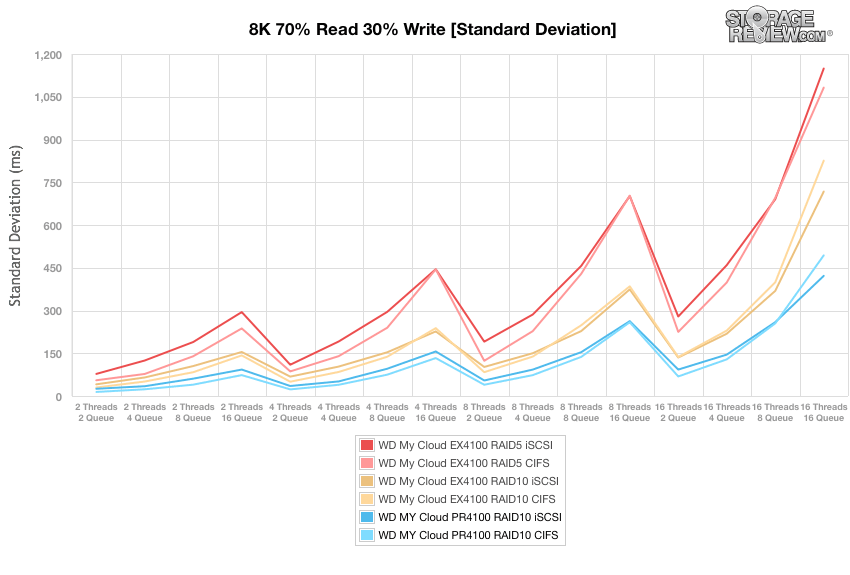 The last test in our small NAS Synthetic Workload testing is the 128k test, which is a large block sequential test that shows the highest sequential transfer speed. When looking at the 128k performance of 100% write and 100% read activity, the WD PR4100 had the best read activity (but not by much), with 231.6MB/s and 231.5MB/s in CIFS and iSCSI, respectively. In write, however, it performed significantly better than the EX4100 configurations, with 227.6MB/s (CIFS) and 231.1MB/s (iSCSI).

The My Cloud Pro PR4100 is a 4-bay NAS solution that proves to be a significant boost in performance over the EX line in both performance and functionality. Offering upwards of 32TB in capacity, the PR4100 is equipped with three USB 3.0 ports that can be used for supplemental storage, a backup power supply and a LCD display that gives useful information about the WD NAS, while its intuitive NAS management software, the My Cloud Dashboard, is easy to use and intelligently designed. Because the PR4100 supports many popular 3rd party applications to expand its functionality, we also found it to be a versatile and highly customizable device.

Diving into its performance shows solid results across the board. In random 4k performance with 100% write and 100% read activity, the PR4100 showed impressive write activity with 708 IOPS in iSCSI and 720 IOPS in CIFS, while measuring 353 IOPS and 335 IOPS, respectively. When looking at our 100% 8k sequential throughput benchmark, the WD PR4100 performed very well again, with the iSCSI configuration with an impressive read and writes (21,238 IOPS and 28,526 IOPS, respectively). Numbers weren’t far behind during the CIFS file-level storage test, as it posted 21,190 IOPS read and 28,337 IOPS write. Our mixed workload profiles continued to show PR4100’s very capable performance, performing significantly better than the EX4100 configurations with 445 IOPS during iSCSI. Lastly, in our large block 128k sequential test, the WD PR4100 recorded the best read activity in both configurations, while showing significantly better write activity than the EX4100 configurations, with 227.6MB/s (CIFS) and 231.1MB/s (iSCSI).

Professionals will find a lot to love with the My Cloud Pro PR4100; it's easy to manage, highly customizable, and improves on the EX line in terms of performance, functionality, and storage capacity.