Data volume, especially Big Data, continues to grow at amazing rates, however, IT budgets are not growing at the same rate. Organizations are looking to lower the total cost of ownership (TCO) to help them tackle the growing data volume. HGST’s latest helium drive, He10, is an effective tool companies can use to do just that. The He10 is a 10TB HDD that utilizes PMR technology and HGST’s proven HelioSeal technology. This new HDD is designed to deliver capacity, efficiency, reliability, and reduced power usage to the data center.

Data volume, especially Big Data, continues to grow at amazing rates, however, IT budgets are not growing at the same rate. Organizations are looking to lower the total cost of ownership (TCO) to help them tackle the growing data volume. HGST’s latest helium drive, He10, is an effective tool companies can use to do just that. The He10 is a 10TB HDD that utilizes PMR technology and HGST’s proven HelioSeal technology. This new HDD is designed to deliver capacity, efficiency, reliability, and reduced power usage to the data center. 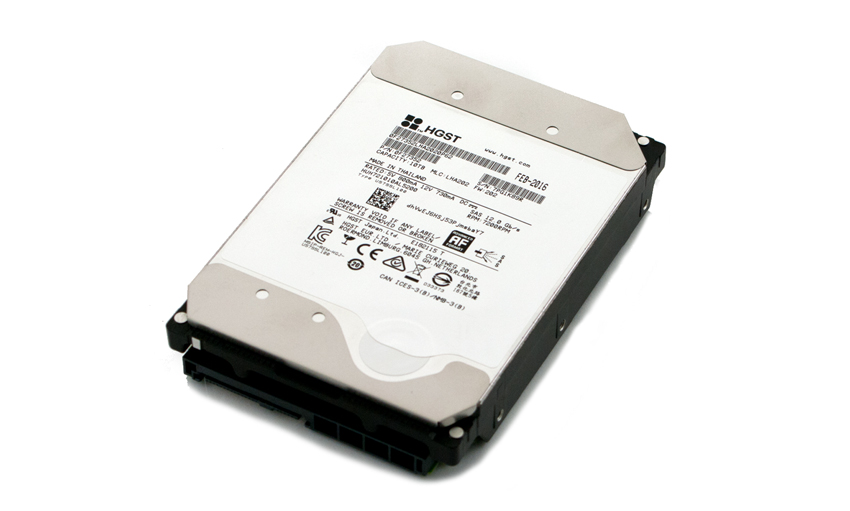 As stated, the drive is sealed and filled with helium to reduce friction. With fewer disturbances inside the drive, more platters can fit and less power is required. When compared to an air-filled 8TB HDD, the He10 delivers 25% more capacity, uses 44% less power, is 56% more power efficient (Watts/TB), and is 25% more reliable. HGST has added a second-generation, dual-stage actuator (the HGST Micro-Actuator) to deliver better performance through enhanced head positioning. This actuator becomes more important in multi-drive environments (such as a data center) where vibration is more likely. 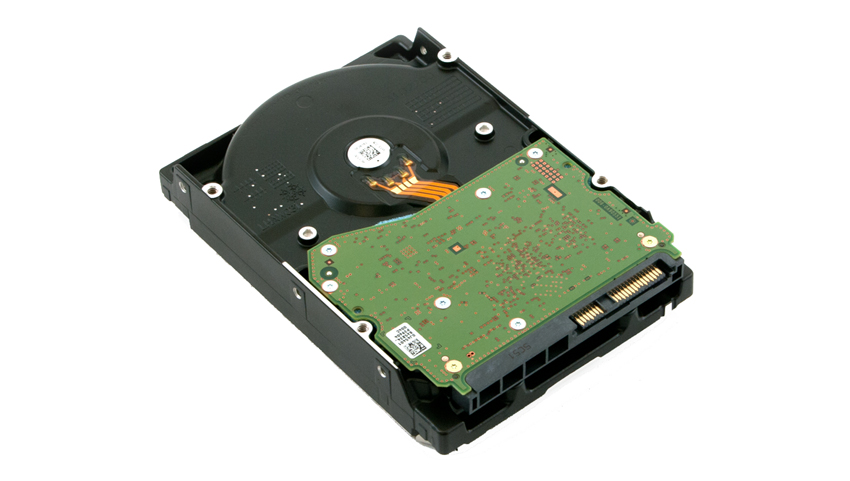 The Drive comes in both SAS and SATA interface and has a 5-year warranty. For our review we will be looking at the 10TB, SAS model.

Prior to initiating each of the fio synthetic benchmarks, our lab preconditions the device into steady-state under a heavy load of 16 threads, with an outstanding queue of 16 per thread. Then the storage is tested in set intervals with multiple thread/queue depth profiles to show performance under light and heavy usage. Preconditioning and Primary Steady-State Tests:

Our condensed Enterprise Synthetic Workload Analysis includes one profile designed to show peak random I/O from each device. This profile is designed to be used as a baseline comparable to cross-reference manufacturer claims of random transfer speeds.

In the following section of this review, we will show the 10TB He10 performance in both iSCSI and CIFS configurations. HGST supplied StorageReview with eight samples of their new SAS HDDs, which we configured in RAID10 in a Synology RackStation RC18015xs+. The rest of the drives we tested in a Synology DiskStation DS1815+ as they were SATA interface and the He10 is SAS interface. While there is a distinct difference in performance available from the rack-mount Synology, we limited testing to four 1GbE LAN ports only, keeping peak bandwidth in line with the DS1815+. Random-access performance from all hard drives tested to date (really any hard drive) still falls well below the peak limits of either Synology NAS.

We will be including the following drives as comparables in the DS1815+ configuration:

In our throughput test measuring 4K random performance (CIFS), the He10 showed a tremendous advantage in write performance with 3,748 IOPs, over a 1,000 IOPS higher than the next closest HDD, the Seagate IronWolf. In read throughput, the He10 took the third spot at 626 IOPS.

In iSCSI 4k throughput, the He10 had a strong write performance at 2,029 IOPS, placing it second overall behind the IronWolf. Read performance was 2,883 IOPS, putting the He10 in the middle-to-bottom of the pack.

Looking at 4k average latency (CIFS), the He10 once again had the best write performance at 68.28ms, and a read performance that put it in third with 408.83ms.

Switching to iSCSI 4k average latency, the He10 had the second best write performance at 126.16ms and came in fourth for read performance at 88.76ms.

4k max latency for CIFS showed the He10 with the best performance in both read and write with 1,976ms and 1,040ms, respectively.

For iSCSI 4k max latency, the He10’s performance wasn’t as impressive as its CIFS performance. Though it came in third in write performance with 1,102ms, it had the worst performance in read with 2,981ms.

Standard deviation for CIFS once again put the He10 at the top of the pack with 103ms write and 489ms read.

For iSCSI standard deviation, the He10 was third in write performance with 148ms, but was second to last in read latency with 141ms.

The next benchmark tests the drives under 100% read/write activity, but this time at 8K sequential throughput. With CIFS configuration, the He10 had the best write performance by quite a bit, with 54,879 IOPS, and the next closest drive, the WD Red was over 10,000 IOPS behind. Read performance wasn’t as impressive, though, as the He10 ended in third overall with 57,095 IOPS.

When looking at the 8k 100% read/write for iSCSI, the He10 came in fourth out of seven in write performance with 21,948 IOPS. The drive once again came in third for read performance at 10,696 IOPS.

Our next test shifts focus from a pure 8K sequential 100% read/write scenario to a mixed 8K 70/30 workload, where we will show how performance scales in a setting from 2T/2Q up to 16T/16Q. In CIFS, the He10 started off third from the leader and finished third from the lowest performing drive. The He10 peaked at 490 IOPS. 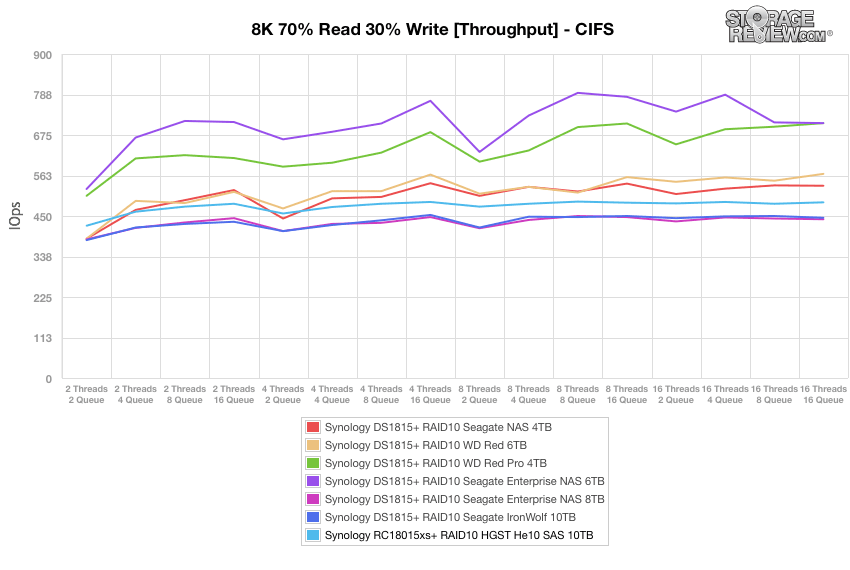 In iSCSI, the He10 performed better than in CIFS for a change. The He10 started near the bottom of the pack but slowly worked its way up to the top, finishing with the highest performance of 2,274 IOPS. 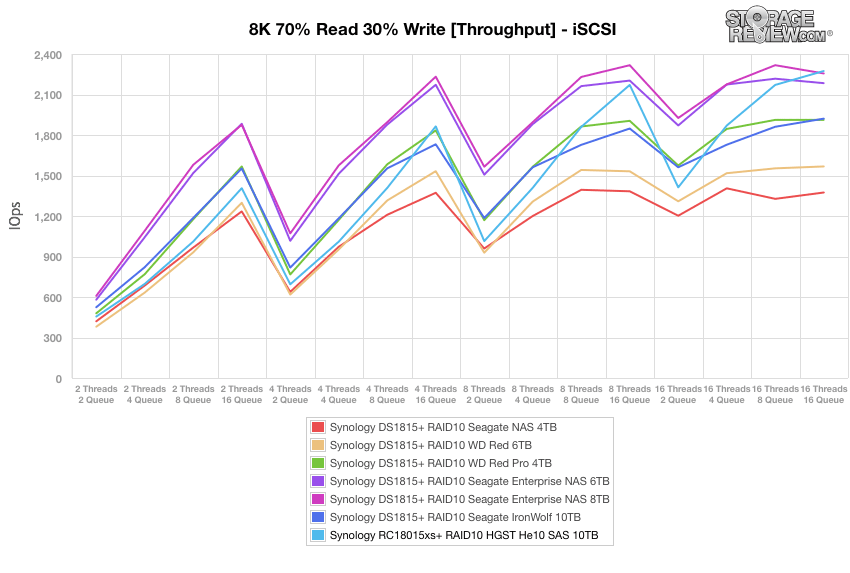 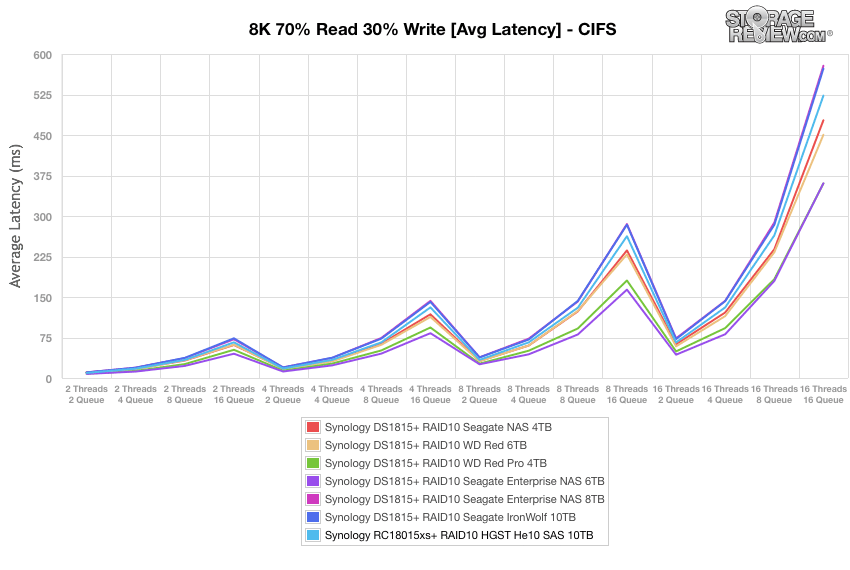 For iSCSI average latency, again the He10 showed an overall stronger performance than in CIFS configuration, finishing around 113ms–the lowest latency of the group. 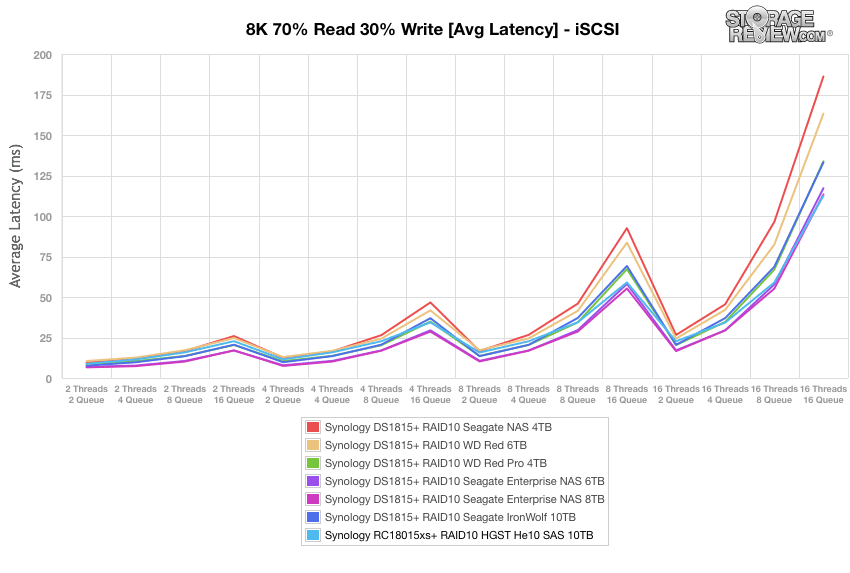 For max latency in CIFS, the He10 performed well overall, finishing with the best latency, and barely edging out the Seagate Enterprise 8TB HDD. 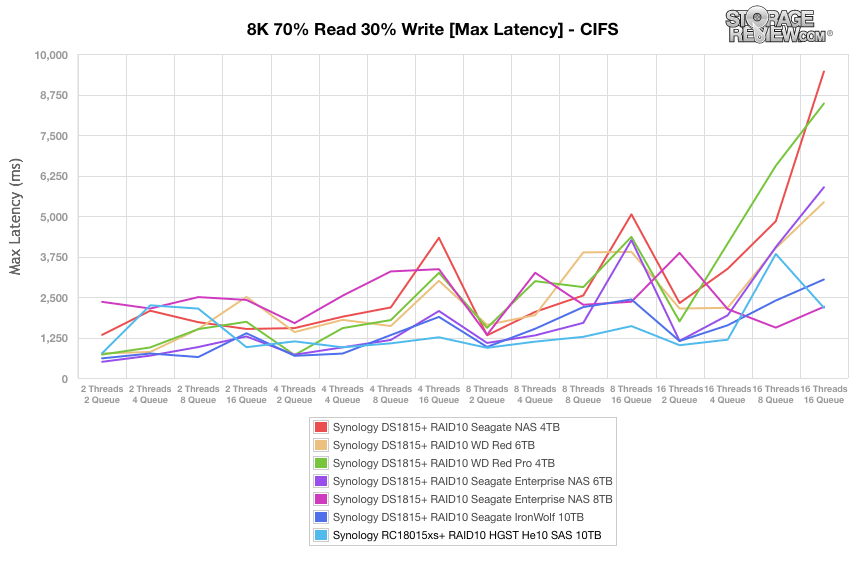 In iSCSI max latency, the He10 again showed a good performance, finishing third with 1,317ms. 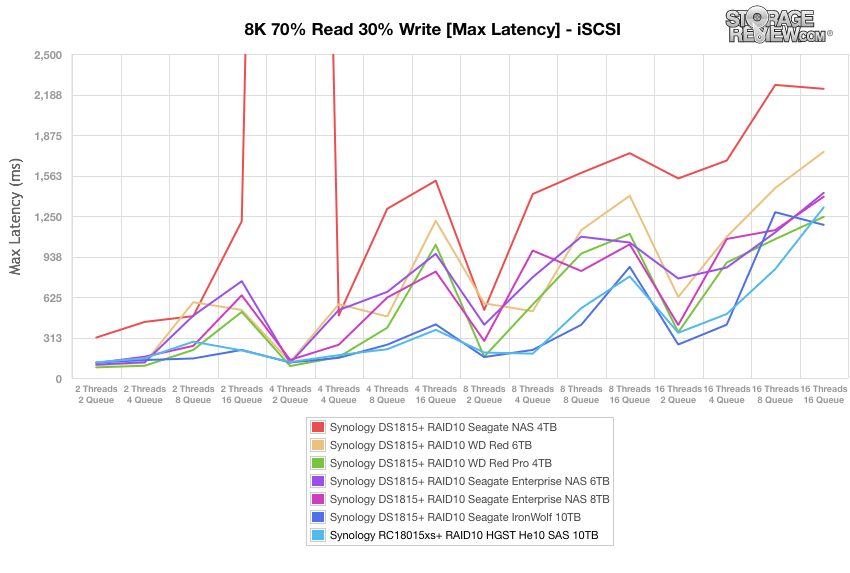 The standard deviation latency results for our 8K 70/30 benchmark in CIFS showed He10 once again was a strong performer, coming in third after narrowly being edged out by the IronWolf, finishing at 372.44ms (the IronWolf finished at 372.29ms). 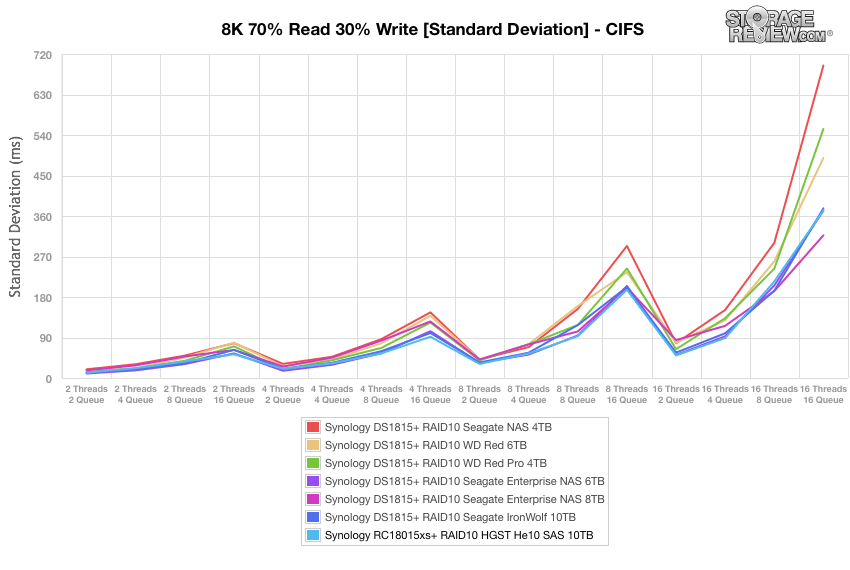 In iSCSI configuration, the He10 had the second best score in standard deviation, finishing at 109ms. 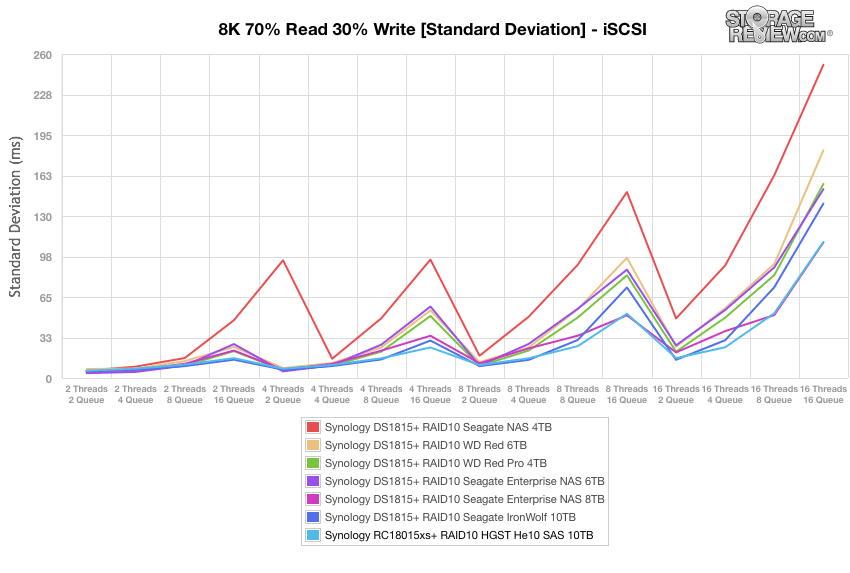 Our last test is the 128K benchmark, which is a large-block sequential test that shows the highest sequential transfer speed. In CIFS, all of the drives posted read speeds that were close to one another. The He10 finished fifth at 462.7MB/s (the top score drive, the Seagate Enterprise NAS 6TB, finished at 462.9MB/s). However, the He10 had the best write speed by some margin with 454.9MB/s.

In our iSCSI block-level test, the He10 was able to shine a bit brighter with the best write speed of 463MB/s and the third best read speed of 413MB/s.

HGST has continued to push the capacity limits of HDDs with its latest helium drive, the He10 with 10TB of capacity. The He10 utilizes PMR and HGST’s HelioSeal technology to deliver more capacity and lower power usage than 8TB air filled drives. The He10 comes with either SAS or SATA interface and is drop-in ready for all mainstream applications in need of more capacity. This go around, HGST added its new Micro-Actuator that is supposed to deliver better performance through enhanced head positioning.

As far as performance goes, we tested the He10, both CIFS and iSCSI configurations, in the Synology RC18015xs+ versus the usual DS1815+, due to the fact we were testing a SAS interface this time around. In our 4k benchmarks, the He10 gave us numbers as high as 3,748 IOPS in write and 2,883 IOPS read, and average latency numbers as low 68.28ms write and 88.76ms read. In our 8k 100% read/write, the He10 was able to hit 54,879 IOPS in write performance. Where the drive really shone was in our large block sequential test with the best write speeds with 454.9MB/s in CIFS and 463MB/s in iSCSI.

Large block sequential workloads are likely the most common for this type of drive, so it's good to see a performance highlight there. The massive capacity drives in this class are found in all sorts of use cases including surveillance recording systems, big data analytics platforms and archive systems. With the He10, HGST continues to support these growing data volumes with progressively larger and faster hard drives.

The HGST He10 delivers 10TB of capacity via SAS interface and good overall performance where it counts with the company’s proven HelioSeal technology.

HGST He10 at Amazon