Western Digital has both announced and started shipping their 5th generation Caviar Green hard drive. Of course the major highlight this time around is the monster 3TB capacity, a first for internal 3.5" hard drives. WD accomplishes this feat by leveraging Advanced Format and four 750GB platters. In addition to the 3TB model (WD30EZRSDTL) there’s also a 2.5TB (WD25EZRSDTL) capacity available. Other drive highlights include a 64MB buffer, 3Gb/s SATA interface and quoted standby power consumption of only 1W. While the high capacity is surely a blessing to many users, there are certain risks WD is taking by going to market right now. We’ll dive into these potential compatibility issues and take a look a performance numbers in this review.

Western Digital has both announced and started shipping their 5th generation Caviar Green hard drive. Of course the major highlight this time around is the monster 3TB capacity, a first for internal 3.5" hard drives. WD accomplishes this feat by leveraging Advanced Format and four 750GB platters. In addition to the 3TB model (WD30EZRSDTL) there’s also a 2.5TB (WD25EZRSDTL) capacity available. Other drive highlights include a 64MB buffer, 3Gb/s SATA interface and quoted standby power consumption of only 1W. While the high capacity is surely a blessing to many users, there are certain risks WD is taking by going to market right now. We’ll dive into these potential compatibility issues and take a look a performance numbers in this review. 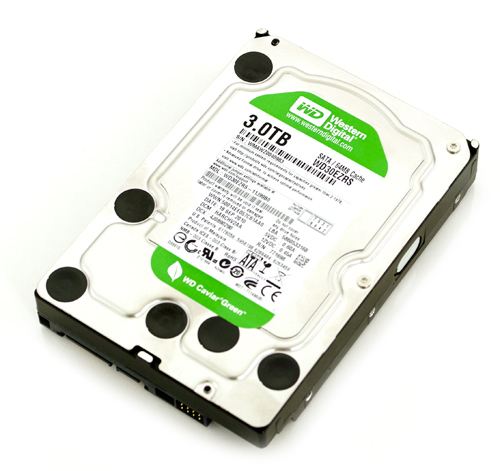 To this point, 3TB drives have been limited to external enclosures. Doing so gives consumers the option to have access to large capacity drives, but limits their utility by leaving them outside of the system. As it stands, one of the largest impediments to high-capacity internal drives is the 2.19TB barrier. WD is banking on consumers working around this barrier, while we collectively wait for software and hardware to catch up, supporting larger drives natively.

Before we get too far along, it’s worth clarifying the 2.19 problem. Windows and some Linux variants hit the 2.19TB capacity limit because they can only address 232 logical blocks (OSX is not affected by this limitation). With a drive sector size of 512 bytes, you arrive at the 2.19TB cap. Because of a combination between legacy BIOS and support only booting from a MBR (Master Boot Record) partition formatted drive, there are limitations when attempting to move to a higher capacity drive. To be able to boot from a drive larger than 2.19TB, the BIOS and system drivers need to agree on capacity and layout of the hard drive to boot and operate properly.

To solve this problem, the industry is moving to GUID Partition Tables (GPT) instead of MBR partition tables through organization by UEFI, which is "a community effort by many companies in the computer industry to modernize the booting process." Moving to GPT partitions allows for up to 18 Exabyte (264) of Logical Block Addressing, thereby breaking through the current bottleneck. While some UEFI capable systems are already shipping, the industry is probably looking toward mid-2011 for full adoption for Windows-based machines (OSX is already there). Also a requirement is a 64-bit operating system.

Since most current systems don’t yet support UEFI standards, WD is providing an interim solution for those who want to boot these high-capacity drives in certain operating environments; they’re including an AHCI-compliant  host bus adapter (HBA) card with the retail drive kits. This allows legacy BIOS motherboards and GPT-ready operating systems to use a known driver to correctly support large capacity drives. While not a perfect solution, WD had to either go this route or hold off until UEFI adoption warranted the drive release.

The rules are slightly different when using the drive in a non-boot scenario, simply as a secondary storage device. Here the drives play well with 32-bit operating systems when used with or without the included HBA (depending on OS). The following chart breaks down the scenarios:

All the above is a long way of explaining more or less why WD went with the HBA solution instead of delaying the release of the 3TB Caviar Green drive and what the compatibility table looks like. However, it’s unfortunately not that simple, and even users who meet the 64-bit Windows 7 OS requirement, for instance, may not find entirely smooth sailing when installing this drive, as we’ll detail later in the review. WD knows the path will be bumpy though and for those dedicated souls who want the additional capacity, the dedication will generally yield good results.

We were kind of surprised by the lack of LED lighting, see-through Plexiglas cover, or chromed body on the new Caviar Green 3TB drive. For being the first 3TB internal drive to come to the market, you might expect to see a little more fanfare. As it is, the new 3TB Caviar Green looks to be a near carbon copy of the previous 2TB green from the outside if you don’t play close attention to the label. 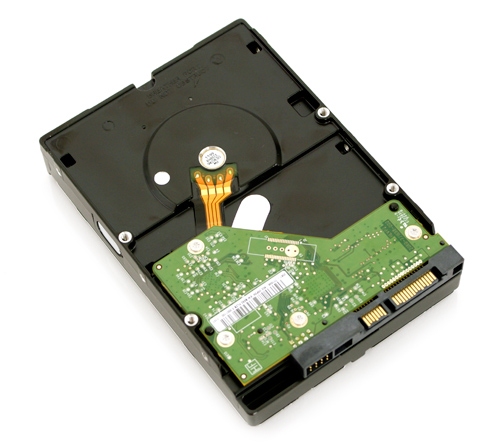 As always the black painted body and silver cover goes hand in hand with Western Digital hard drives (as well as others) with the uniquely colored label to signify which family the drive comes from. In this case the green label lines up with the Caviar Green product family. 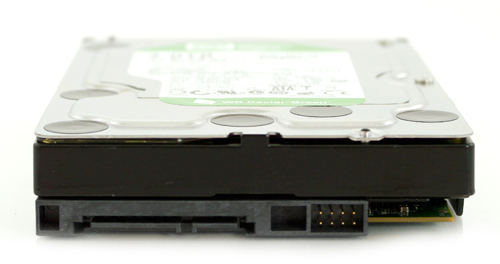 From the front the 3TB Caviar Green has the standard SATA data and power connection with 8 service pins generally reserved for debugging modes and changing drive settings for advanced users. 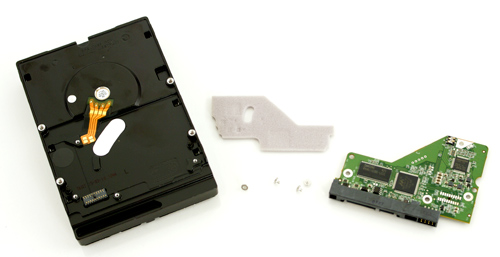 The Western Digital Caviar Green 3TB drive uses a primarily single-sided PCB, with all components facing the body of the drive for thermal dissipation. The board is held firmly to the drive with four Torx screws with a vibration isolation pad mounted between the circuit board and metal body. 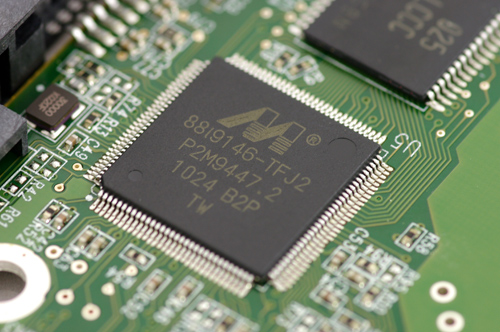 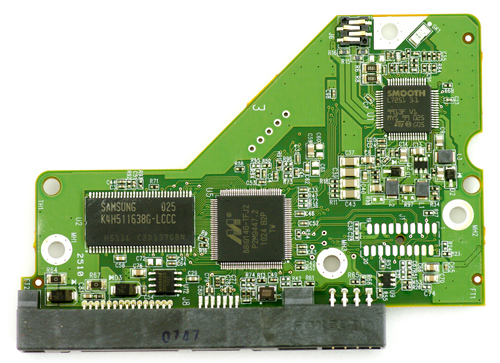 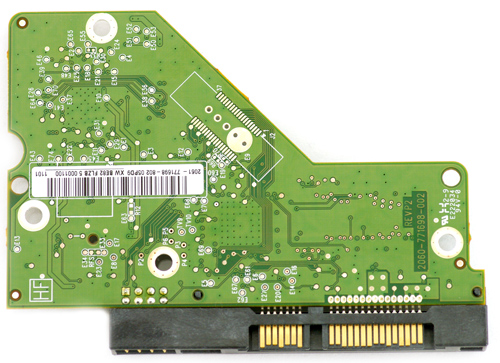 In the introduction we mentioned that WD knew from the start that there would be some compatibility issues with various systems, but they didn’t want to hold back this drive back any longer. In our lab we actually ran into a problem of getting the Caviar Green 3TB drive to recognize its proper capacity in our test rig, even with the HBA add-on card. No matter what we did the drive would only recognize as a 746GB drive.

In one of our alternate Linux-based systems the add-on card actually worked as intended, showing the drive’s full capacity, and allowing us to run the Crystal Disk Mark tests on the very outside and inside of the platters. In our test rig we were only able to make use of the outside 1/3 of the drive, which was fine for our IOMeter tests, but would have given false readings in CDM.

We also tested the 3TB Caviar Green in two NAS units being tested in our lab, including a Synology DS411+ and a QNAP TS-459. Both models recognized the drive as a 3TB model and were eager to create a properly sized single partition on the drive. Neither seemed to throw as much of a fit as our Dell XPS 9000, which wouldn’t show more than a 746GB capacity with or without the HBA.

In our first test we take a look at the 3TB Caviar Green’s 2MB sequential transfer rate. The previous 2TB model reached 110MB/s, so let’s see if the 3TB improved from its smaller sibling. The 3TB model jumped to 119MB/s read, but stayed at 100-110MB/s write depending on 4K alignment. 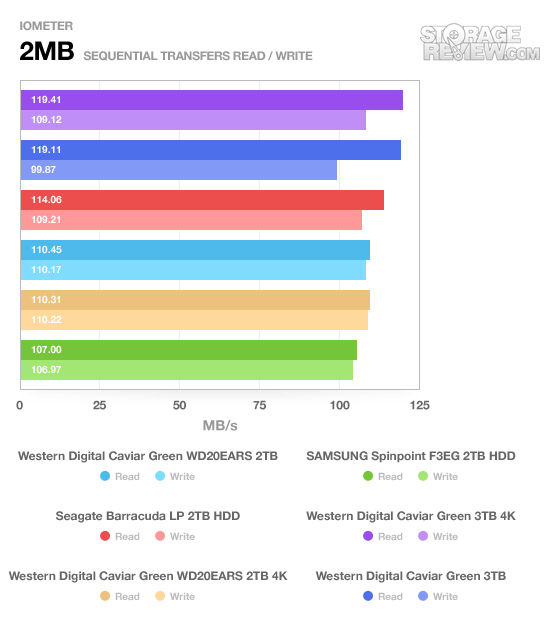 In our 2MB random transfer test the read speeds increased substantially, going from 37-42MB/s on the 2TB model to 52-66MB/s on the 3TB model. Not too shabby for a ‘green’ drive. Write performance also went up, from 42MB/s with 4K-alignment on the 2TB drive to 60MB/s on the 3TB drive. 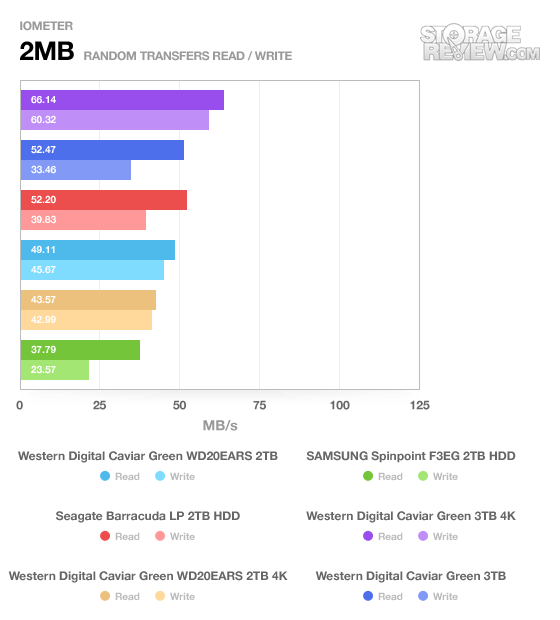 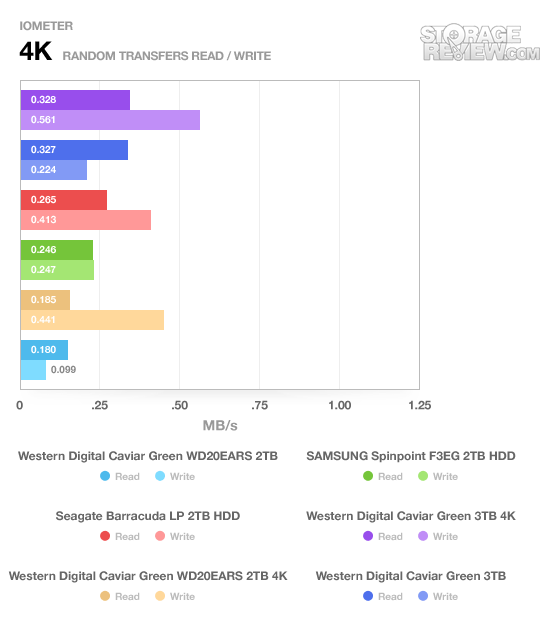 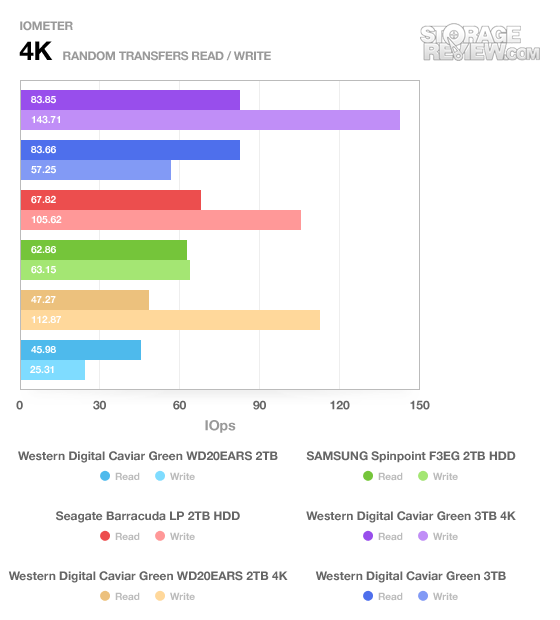 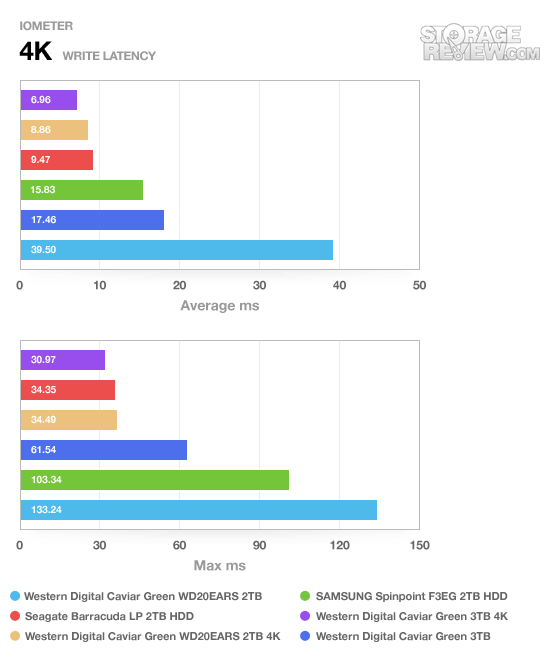 CrystalDiskMark showed similar results as IOMeter, although there were some differences in the random 4K transfers. 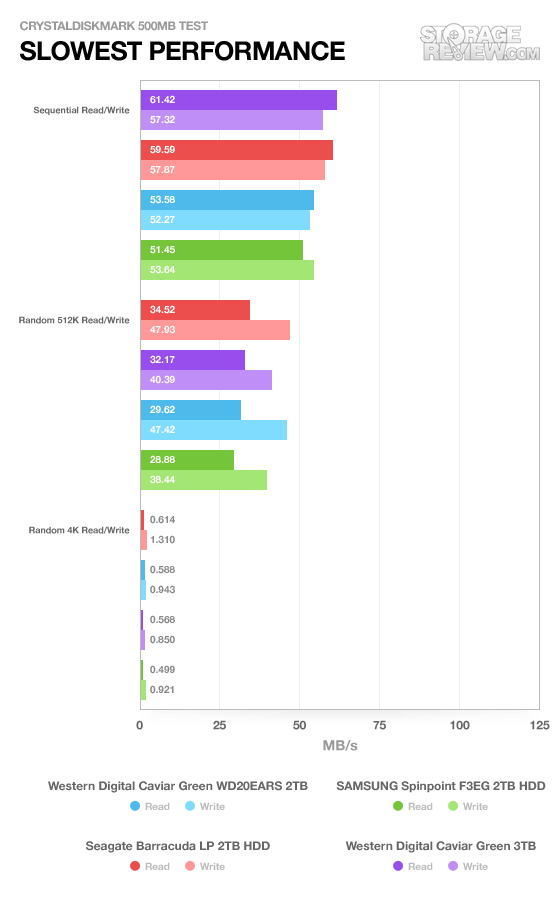 In the IOMeter server profile tests, scores jumped across the board, in some cases improving well over 50% for a given queue depth. The 3TB Caviar Green drive is actually starting bite at the heels of the performance-oriented 7200RPM 2TB drives. 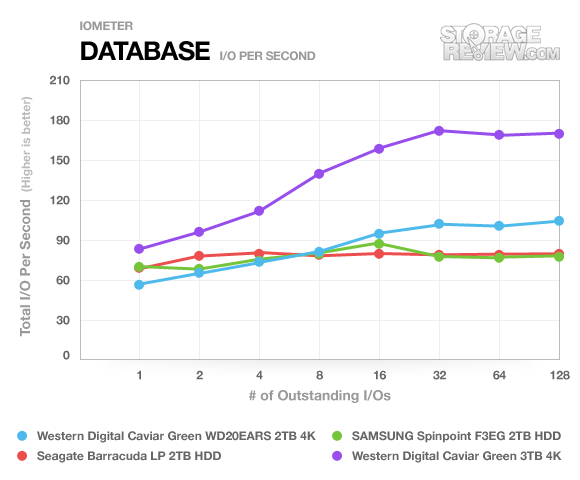 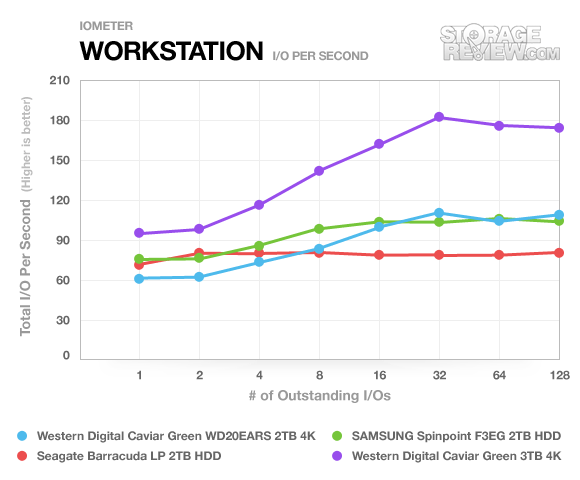 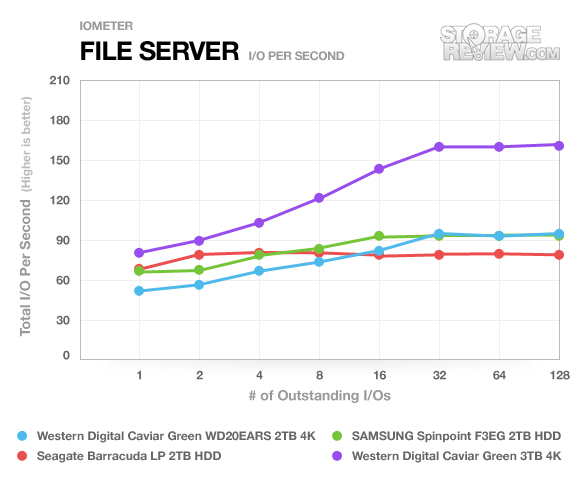 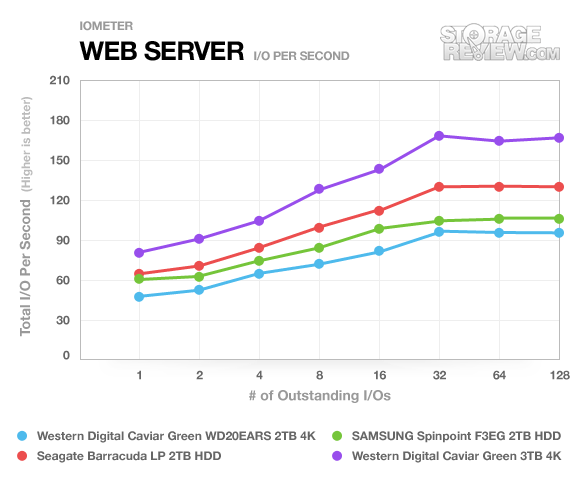 The primary selling point of any eco-friendly drive like the Caviar Green series from Western Digital is its lower power consumption compared to 7200PM hard drives. Generally speaking they have a lower spindle speed, and scale other aspects back to conserve power. Western Digital improved things across the board with the 3TB Caviar Green, making it much more efficient than before; which is even more impressive if you look at it in terms of a power use to GB ratio.

Most drives spend their entire life sitting at idle, especially when it comes to a server hosting media. The server might be on 24/7, but for most people you don’t stress it unless you are downloading media throughout the day or are using it to stream content at night when you are home from work. The new 3TB Caviar Green now consumes 3.89 watts at idle, from a previous 6.31 watts on the 2TB model. That’s almost half of what it was before!

Write performance power use also dropped by about 1.5 watts, down to 5.69W. Another area that really improved was the startup power draw; albeit at the expense of a rather slow spin up speed. Previously the 2TB Caviar Green needed 14 watts to spin up, while the new 3TB model needs only 12.3w. So if you keep your server running constantly, the new 3TB Caviar green draws much less power sitting idle and stresses your system less when it spins up from a full power-saving state.

Currently Western Digital offers a three year warranty on the 3TB Caviar Green (the same as the 2TB model). This is similar to what is offered from other companies when it comes to eco or low-power models, but below average compared to standard drives such as the Caviar Black which comes with a five year warranty.

Western Digital offers one of the better exchange programs if problems do come up, with a free advanced replacement program with only a hold put on your credit card.

The Western Digital Caviar Green 3TB drive is the first drive of its capacity to be available for purchase for use as a boot or secondary drive. Seagate was technically first to market with their external 3TB storage solution, but it has not been sold as a bare drive for DIY use. The 50% capacity jump is great if you are working with limited bay NAS units, which might already be maxed out with 2TB drives. In a given RAID 5 implementation going from four 2TB drives to four 3TB drives means your total storage capacity goes from 5.5TB up to 8.3TB.

Besides the significantly higher starting price over the 2TB Caviar Green ($189.00 MSRP for the 2.5TB and $239.00 for the 3TB), the new 3TB model does have its drawbacks. Compatibility is limited, there is no current Windows XP support, and even with the HBA add-on card you still might run into problems. If you think this drive might be something you are interested in, you might want to make sure you check our forums and comments at retailer websites to see what other users with your hardware are saying. As time goes on though, every system will be moving to become UEFI compatible, and this issue goes away on its own. Until then, if you can’t wait to finally increase the capacity of your machine, or absolutely must have the latest hardware, the 3TB Western Digital Caviar Green might be for you.

Western Digital had to get creative to sneak around software limitations in most operating systems to get this behemoth 3TB drive working. We’re glad they did; the fifth generation Caviar Green is a great performer and WD made tremendous strides in the power consumption area – the 3TB drive wins all but one of our power tests and crushes the others where it counts, idle power draw.