Western Digital recently released their latest entry in the media streamer space. While the earlier editions of WD’s TV Live family fared well, renewed competition from Apple, Roku, Netgear and others mean that to succeed with a steaming device you have to accomplish several goals, foremost among them a nice interface, ease of use, ease of configuration and the “wild card.” Each device sports a certain trick up its sleeve and it’s often these tricks that differentiate in a crowded marketplace. For Western Digital and the TV Live Hub (WDBABZ0010BBK), the wild card is the inclusion of a 1TB internal hard drive. We’ll explore the device in detail and discern the benefits of the internal storage in this review.

Western Digital recently released their latest entry in the media streamer space. While the earlier editions of WD’s TV Live family fared well, renewed competition from Apple, Roku, Netgear and others mean that to succeed with a steaming device you have to accomplish several goals, foremost among them a nice interface, ease of use, ease of configuration and the “wild card.” Each device sports a certain trick up its sleeve and it’s often these tricks that differentiate in a crowded marketplace. For Western Digital and the TV Live Hub (WDBABZ0010BBK), the wild card is the inclusion of a 1TB internal hard drive. We’ll explore the device in detail and discern the benefits of the internal storage in this review. 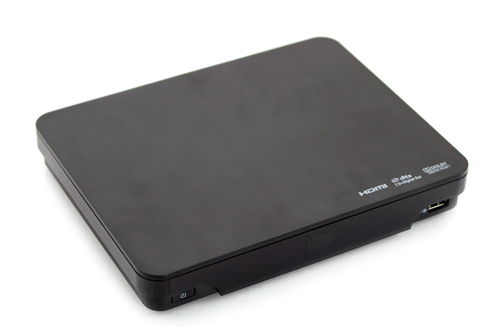 As this is a storage site, we’ve largely only offered a passing glance at the deluge of media players on the market. We’re generally more concerned with the data storage and systems that feed such devices. Even so, I’ve managed to amass an unnerving pile of these gadgets to help manage my unhealthy addiction to video-based entertainment. To a large extent, they’re all the same at the core – they give the user access to online services and act as a gateway to other digital content on the home network.

It’s for this reason that Western Digital has done something different this time around. While the Live Hub certainly may appeal to the hardcore home A/V nerd, the simplicity and local storage make it work well with a much larger audience. For those without networked storage at home or a firm grasp on organizing digital assets on a computer, the integrated, all-consuming Live Hub makes sense. There are also certain performance gains too, as content from online services like Blockbuster On Demand is played off the disk, not streamed, which can make a dramatic playback quality difference.

While the hard drive is the main attraction, there are plenty of other enhancements the Live Hub has to offer over previous models. It supports DLNA, which means it can stream to and from other DLNA compatible devices, which includes most Blu-ray players, gaming consoles and NAS units. Other niceties include a programmable remote, customizable interface and retrieval of metadata (cover art, etc.). Couple all of this with 1080p HD and HDMI 1.4 support (needed for 3D programming) and Western Digital has an interesting offering for $199.

Getting the WD TV Live Hub apart wasn’t easy. There are no screws holding together the case structure, only plastic clips that firmly attach the top lid to the chassis. With some careful fingernail work, we were able to pop off the cover with minimal damage. The problem with plastic retaining clips is even if you are incredibly careful, there will still be one or two that bend to the breaking point. For this reason unless you plan on upgrading the hard drive down the road (doubtful with a 1TB 2.5” drive) there is no reason to open up the case.

It was no surprise to see a Western Digital hard drive at the heart of the WD TV Live Hub. The drive is a 1TB Scorpio Blue 5400RPM model with the larger 12.7mm thickness. If didn’t look to hard to remove and swap out, if the drive ever failed or a larger model came out in the future. 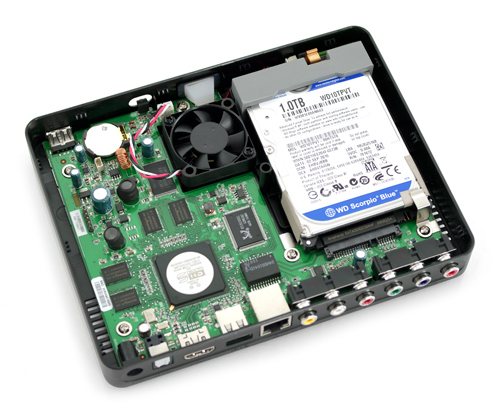 The WD TV Live Hub is powered by the Sigma Designs SMP8654AD-CBE3 controller, with four NANYA nt5tu64m16gg 64MB DDR2-667/800MHz (256MB total) modules, and a 2GB Samsung K9F2G080UB flash chip. Just a note of reference, the circuit board layout included no heatsink units. All cooling was handled by semi-passive cooling with a small breeze into the case from the fan located on the bottom. 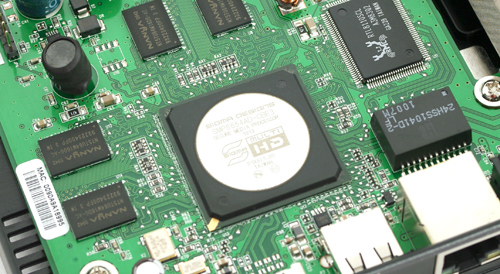 In terms of the WD TV Live Hub’s design, it has a larger footprint compared to the original WD TV or WD TV Live, although a flatter shape. The increased size allows Western Digital to make one important upgrade; the internal 1TB hard drive for media storage. The WD TV Live Hub is completely black, with a matte texture top and bottom and glossy trim going around the perimeter.

The front features the standard issue USB 2.0 port for easily connecting storage media—like an extra thumbdrive—as well as the power button and backlit WD logo that can be disabled if the user so chooses. This design is in-line with the previous look and feel of the WD TV-series, although the Hub features a slightly more refined appearance.

The top and sides are plain without any additional buttons or connectors, although the top does indicate standards such as DTS and Dolby Digital audio and HDMI that the WD TV Live Hub supports. The bottom includes a fan –a first for the WD TV-series—and two mounting points to let you wall-mount the WD TV Live Hub behind a HDTV.

The rear of the unit is where all the magic happens. Western Digital included plenty of connections, spanning from the latest and greatest HDMI 1.4-out to the tried-and-true composite video out for compatibility with even the oldest televisions. It also includes component video and analog stereo out line-out jacks, as well as optical audio-out, Ethernet hookup, and a single USB 2.0 port. The only thing not included is S-Video, but considering how few people use that anymore, it saved space by removing it.

Compared to the previous WD TV and WD TV Live the newest WD TV Live Hub interface looks completely different. In our office we were joking around that it was similar to making the switch from Windows 95 up to the latest version of Mac OS 10. The old design felt boring, with very little animation or refinements. None of this actually interfered with the performance of the previous media players, but the designs still felt really mundane. No more though, cause now it looks and feels completely different. 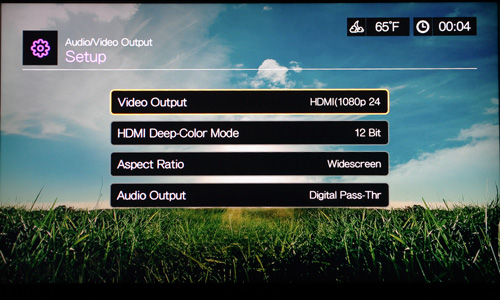 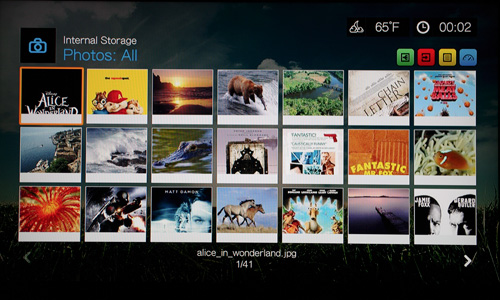 The interface makes use of a navigation bar on the bottom of the screen at all times. This shows which mode you are in (files, video, setup, etc) and shows a little animation on each change in selection. The bar can also be popped up to quickly navigate to other areas. The integration with NetFlix, Youtube, AccuWeather are way above our original expectations. They don’t feel simply tacked on to the interface, but fully customized and looking great. Most of the time I actually had the AccuWeather display showing in the background on my TV. Other services included are BlockBuster On Demand, FaceBook, Pandora, flickr, Live365.com, and MediaFly. To control the WD TV Live Hub, Western Digital included a brand new remote which is more than double the size of the old one. For normal nightly use the newer remote was actually kind of clunky and the new layout took a bit to get used to. I would be lying if I didn’t say that 95% of the time using the WD TV Live Hub, I wasn’t using my older, smaller, and easier to grip remote. The older remote style works great, with the same mapped buttons as the new remote, minus the added buttons. Our biggest complaint is probably that the newer design looks and feels like a TV remote instead of a small media player’s remote like you would find on the older models as well as any modern media player.

The WD TV Live Hub had no trouble playing any of the content we tested. This includes high-bitrate 1080P videos, downloaded movie trailers, and everything we could download to think of testing. Out of probably a hundred videos tested, only one very old WMV file failed to play. There were some improvements over the first generation WD TV, which had trouble decoding super-high bitrate 1080P files. These were no trouble for the WD TV Live Hub, even when streamed off a network source.

The full list of supported video formats and codecs is listed below.

Power consumption is a subject on everyone’s mind these days, as people try to lower energy bills or just have a smaller eco-footprint. The WD TV Live Hub from the start was at a slightly power disadvantage by handling an internal hard drive, where previous models relied solely on storage connected via USB or network. The original WD TV used 7 watts of power at idle, which wasn’t bad considering the main component… the original Apple TV used well over 20. The new WD TV Live Hub uses 11 watts of power at idle, so a 4 watt premium for a hard drive as well as Ethernet connectivity.

Playing a 720P video from a USB thumb drive connected to the original WD TV used only 8 watts of power or one watt above idle power consumption. On the WD TV Live Hub, after the video was copied to internal storage, power consumption increased from 11 up to 12 watts. So basically the same power jump that the original model experienced.

The only complaint we had with power consumption, which was also a problem with the first generation model, is that there is no off switch or true power-off state. Pressing the power button on the front of the unit turns off the video output, but only drops power consumption down to 10 watts.

The new WD TV Live Hub is a great new media player offering plenty of internal storage from a 1TB 2.5” hard drive, combined with a wide range of codec decoding support, topped off with streaming support from many online sources like BlockBuster On Demand and NetFlix. For $200, the WD offers a ton of features competitors like the Apple TV don’t. The Apple TV supports maybe a fraction of the video types the WD TV-series has been happily playing for a couple of years now. You also gain plenty of internal storage to keep movies locally or stream them off nearly every network storage solution. Overall we were very impressed by the new software interface, making the WD TV Live Hub still one of the easiest to use and nicest looking media players on the market. If you need a new networkable media player, look no further than the WD TV Live Hub.

The WD TV Live Hub combines a great media player with 1TB of storage and online video streaming services to be *the* entertainment hub for your home theater.