Western Digital has long made excellent external hard drive solutions that appeal to creative types and others who want large capacity local drive access with the fastest interface available. From a Mac perspective, the current interface of choice for speed is Thunderbolt. But to this point we haven’t seen much in the way of direct attached storage where Thunderbolt has proven a worth investment for the mainstream user. WD’s hoping to change our perspective on that with the My Book Thunderbolt Duo, a two-drive external which supports up to six Thunderbolt Duos daisy-chained together.

Western Digital has long made excellent external hard drive solutions that appeal to creative types and others who want large capacity local drive access with the fastest interface available. From a Mac perspective, the current interface of choice for speed is Thunderbolt. But to this point we haven’t seen much in the way of direct attached storage where Thunderbolt has proven a worth investment for the mainstream user. WD’s hoping to change our perspective on that with the My Book Thunderbolt Duo, a two-drive external which supports up to six Thunderbolt Duos daisy-chained together.

Western Digital ships the My Book Thunderbolt Duo in RAID0 for maximum Thunderbolt speed, though it can be configured for RAID1 should a user prefer redundancy of data to sheer performance. The drive are user accessible as well, meaning upgrades or drive swaps are easy, which is rarely the case with external hard drive storage solutions. To help keep the drive running smoothly, WD includes a suite of software tools to manage and report on drive health.

The WD My Book Thunderbolt Duo comes in 4TB or 6TB capacities with street pricing of $550 and $660 respectively. Like most Thunderbolt solutions, cables are not included and are sold by Apple at $50 per. Western Digital includes a three year warranty with the product. 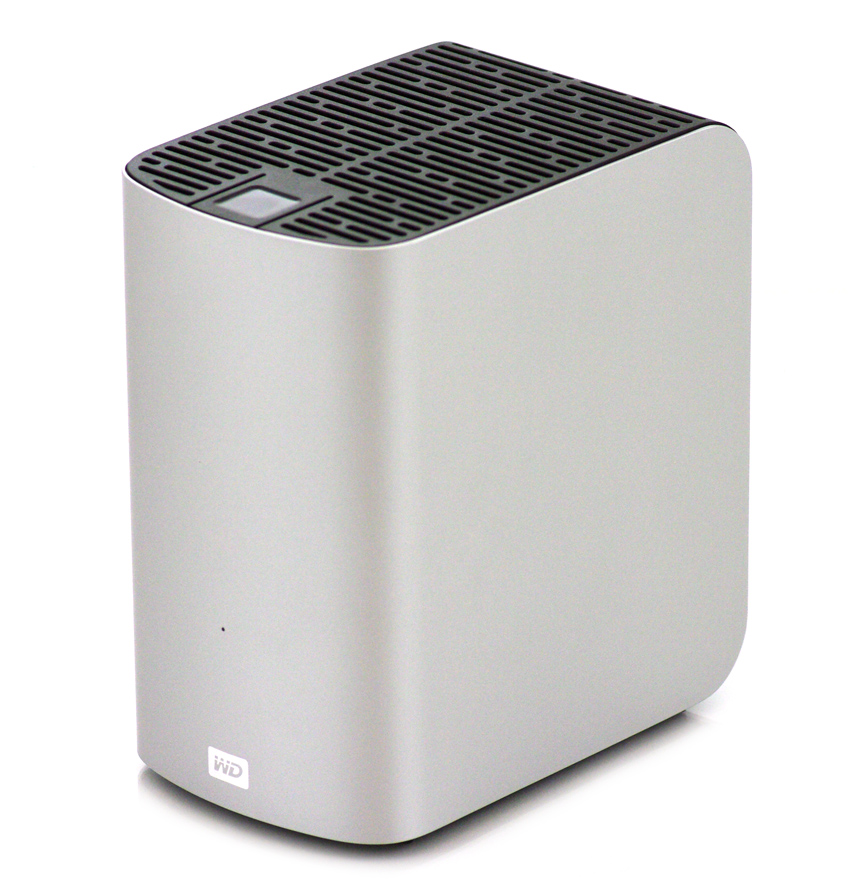 The Western Digital My Book Thunderbolt Duo has a minimalist rounded face with a small WD badge and pinhole-sized white status light. From a design perspective, the highlight is certainly the fact that the drives are user accessible – without being visually distracting – via a lid that opens with moderate pressure on the front edge. This follows the design of the My Book Studio Edition II and My Book Live Duo, making it easy to get at each hard drive. The top has a spring loaded plastic tab, which with a soft press allows users to access both drives inside their My Book Thunderbolt Duo. The Duo is passively cooled, allowing for near silent operation. This is made possible by the twin low-power 2TB or 3TB Western Digital Caviar Green drives inside. 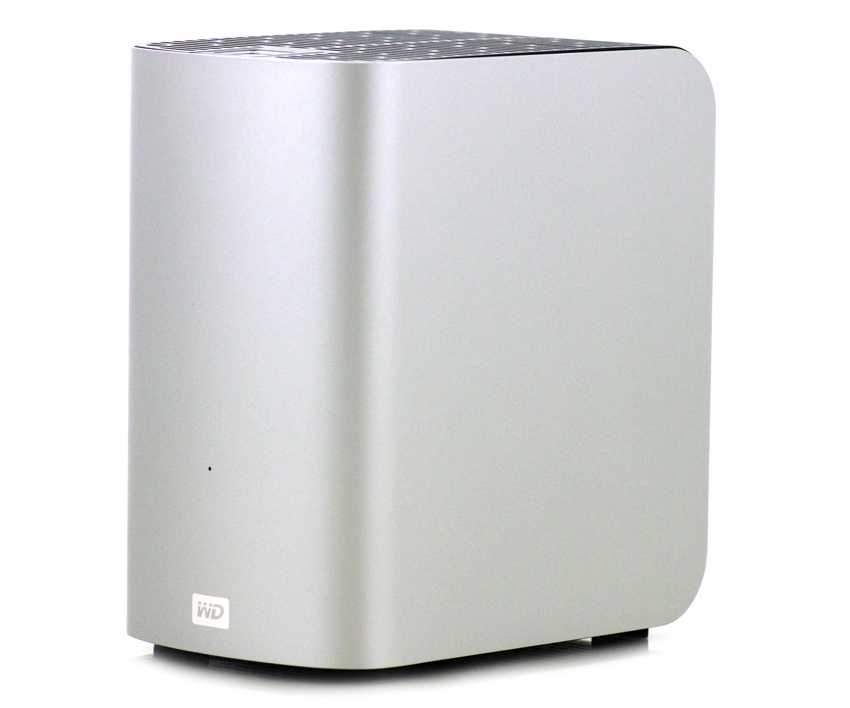 The ports are on the back of the unit, including two Thunderbolt connections, a DC-input power plug, and a locking slot. This is probably one of the easiest high-performance direct-attached storage devices to connect, since you don’t even need to worry about which Thunderbolt plug you attach your computer to. 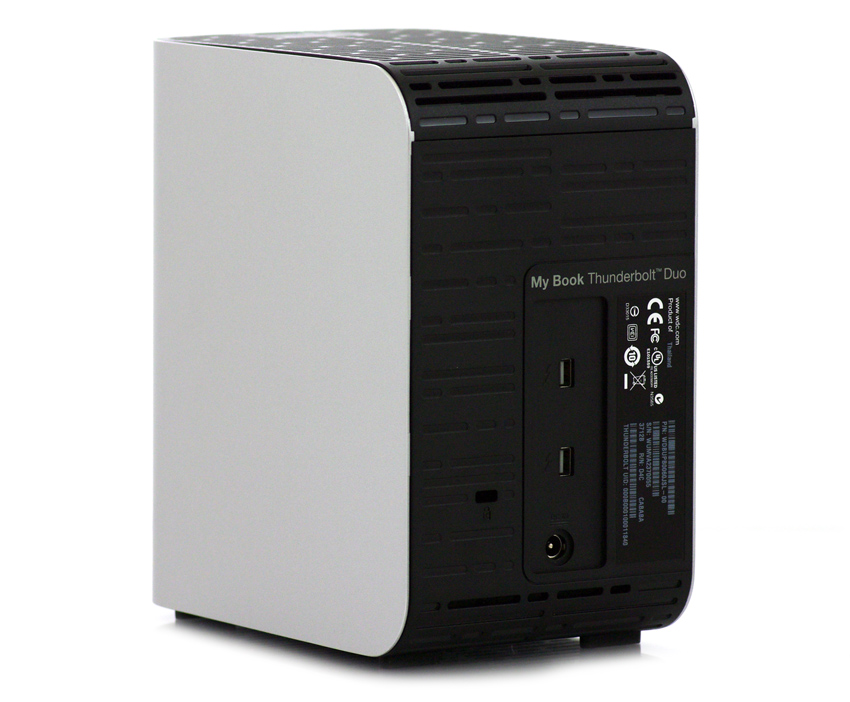 To open the case for drive replacement you press the latch on the top cover, exposing the two Western Digital hard drives inside underneath a metal retention bracket. The drives are quickly removed by unscrewing a thumb-screw holding on a retention plate, allowing you to pull on the handy plastic tab to lift the drive out. The drives are also labeled A and B to quickly identify which drive has failed and replace the correct one. 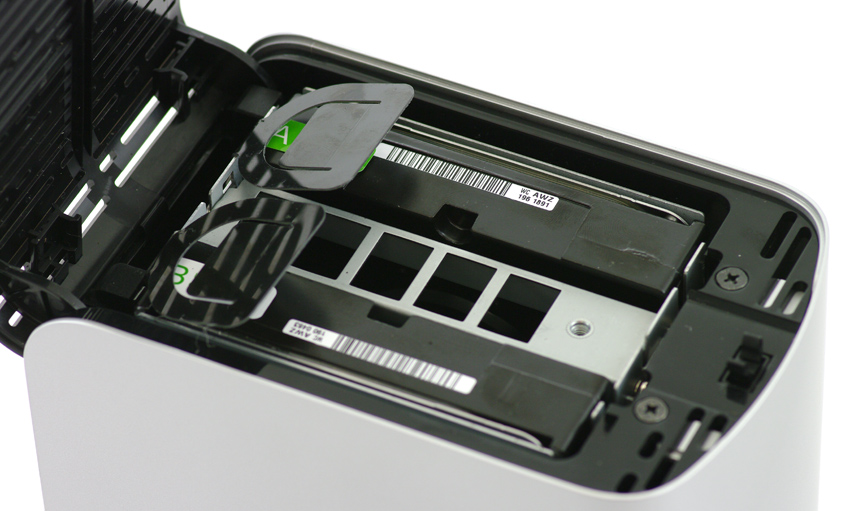 Given the passively cooled design of the My Book Live Duo, users should stick with 5400RPM or Green hard drives. Since this storage device is passively cooled, using faster 7200RPM drives may cause overheating and premature failure.

The drives inside the My Book Thunderbolt Duo interface with the computer they are connected to, giving users some configuration options that are pretty unique. Each drive reports itself as a separate device, allowing the users to access each individually, or stripe/mirror them together for performance or data integrity. In the configuration shown below, we have Disk Utility striping both 3TB drives together for 6TB of total bulk storage. 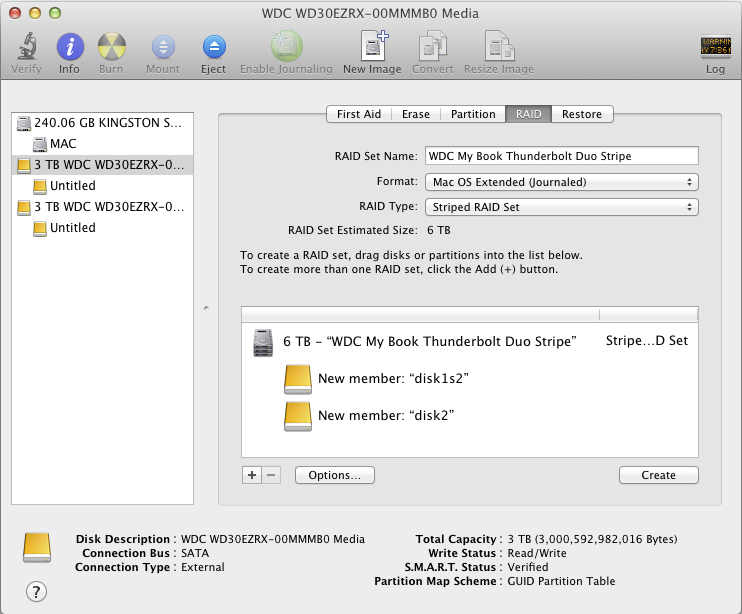 By using a Thunderbolt interface on the My Book Thunderbolt Duo, Western Digital is able to offer significant drive access speeds when looping together two or more drives. The daisy-chaining ability of the Thunderbolt interface allows users to connect many devices, without getting much of a performance drop with the port supporting 10Gb/s speeds. In our tests we were limited to a single Thunderbolt Duo, which includes two low-power Western Digital Caviar Green hard drives. In a striped configuration we were able to perform large sequential file transfers at a rate of 220MB/s read and 262MB/s write. In a mirrored configuration, those speeds dropped to 114MB/s read and 88MB/s write.

The WD My Book Thunderbolt Duo proves that when it comes to hard drives and Thunderbolt, the more the merrier. When in RAID0 we saw speeds of 220MB/s read and 262MB/s write. Where single hard drives using Thunderbolt can’t saturate older generation interfaces, it’s clear that two hard drives in RAID0 can close, making Thunderbolt a viable option. Even better than when considering stringing multiple Thunderbolt Duos together for even more capacity and throughput, giving notebooks as small as the MacBook Air much greater scratch-space than previously available.

For Mac users the extra benefit of configuration through Disk Utility is nice for those wanting the ultimate in configuration flexibility. In addition to the Mac tools, WD also includes a suite of software to run diagnostics and reports on drive health. For the user with even faster transfer speeds in mind, we do hope that Western Digital brings a solution to market offering their faster 7200RPM hard drives, but for most users the Thunderbolt Duo still offers speeds greater than that of previous FireWire 800 or USB 2.0 solutions.

The Western Digital My Book Thunderbolt Duo brings surprisingly quick speeds to Thunderbolt-capable systems and those who need a combination of big capacity and fast throughput in a local external hard drive solution. Supporting speeds upwards of 250 MB/s write with a single Duo is impressive and up to six can be daisy-chained together for more demanding users.