Western Digital has released their 5th generation VelociRaptor, doubling the capacity of the previous 300GB model. The latest models come in 450GB (WD4500HLHX) and 600GB (WD6000HLHX) capacities as 2.5″ hard drives with an IcePack, allowing them to fit in a 3.5″ drive bay. Beyond increasing capacity, the new VelociRaptors promise a performance boost of 15% over the previous generation and draw less power than their 3.5″ counterparts. Read the full review to see whether the drives should find a home in your performance rig or server.

Western Digital has released their 5th generation VelociRaptor, doubling the capacity of the previous 300GB model. The latest models come in 450GB (WD4500HLHX) and 600GB (WD6000HLHX) capacities as 2.5″ hard drives with an IcePack, allowing them to fit in a 3.5″ drive bay. Beyond increasing capacity, the new VelociRaptors promise a performance boost of 15% over the previous generation and draw less power than their 3.5″ counterparts. Read the full review to see whether the drives should find a home in your performance rig or server. 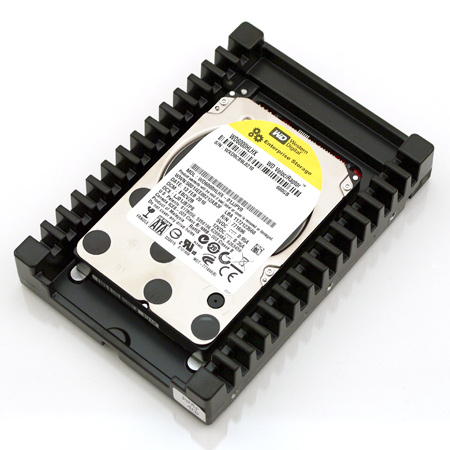 The Western Digital Velociraptor has a very unique appearance compared to any other 3.5” drive on the market. The Velociraptor is made up of a 2.5” enterprise drive mounted to an “IcePack” heatsink frame with a pin-to-pin adapter to position the SATA and power connections in the universal location for backplane connections. The heatsink gives the drive a rugged and high-tech appearance compared to most other 3.5” drives on the market that all look the same. 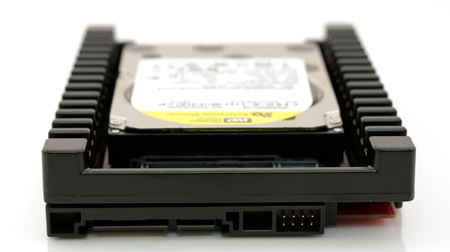 Build quality is very good with oversized components used throughout the construction of the drive. Starting at the exterior and moving inward, the heatsink assembly is thick machined metal. 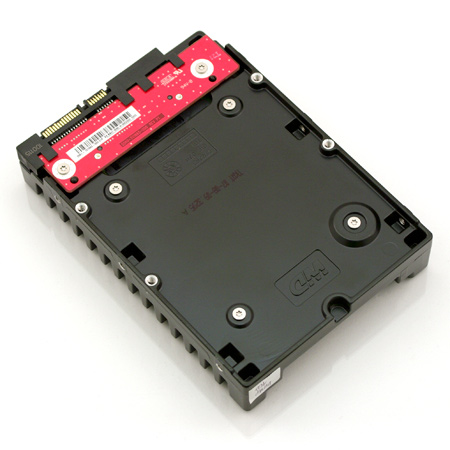 The drive is secured to the heatsink or IcePack with four large Torx screws. With the drive removed you can see a thermal transfer pad that is used to shed heat away from the drive and into the IcePack assembly. 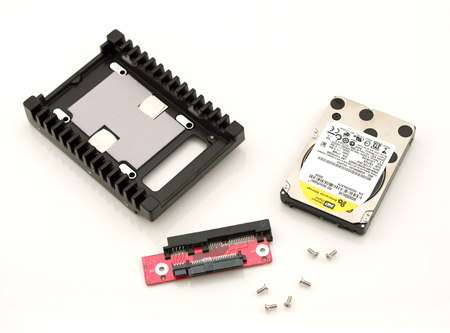 The circuit board at the front of the IcePack is a connection adapter only with no controller chips or anything to modify the connection to a computer. 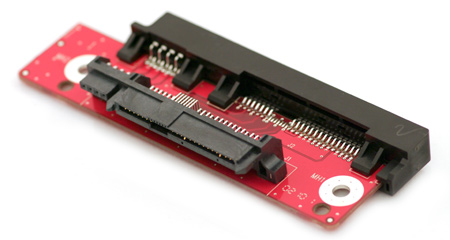 Compared to any other drive on the market the little 2.5” enterprise drive at the heart of the VelociRaptor is more protected than any other consumer drive in its recessed location. 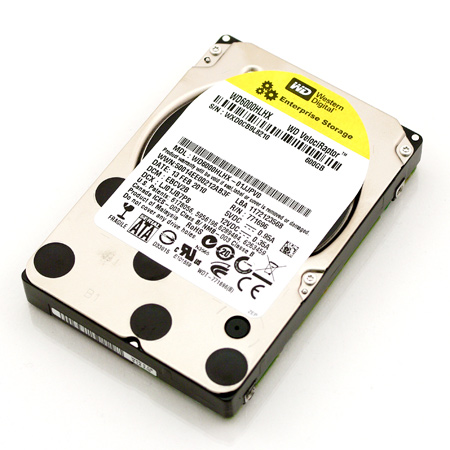 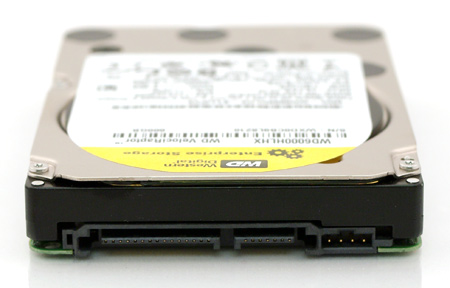 The 2.5” drive inside the VelociRaptor is not unlike many of the 2.5 SAS drives currently on the market. It has the same build as competing drives with the only primary difference being the direct SATA connection instead of using a SAS connector. The drive has a beefier feel than 2.5” notebook drives but is still vastly lighter than 3.5” desktop models. The 2.5” VelociRaptor has its circuit board designed in such a way to keep all the heat-generating components tightly pressed to the bottom of the drive body. This allows the body to act as a heatsink instead of making the chips shed heat into the open air. Another advantage is this keeps the surface-mount electronics safer in the event of being knocked around. 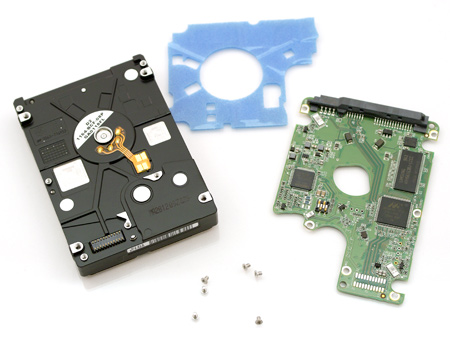 Taking the drive apart we see a standard circuit board with a padded shim in between the board and the drive. The shim helps with vibration and impacts. Also note the shim has cutouts for each heat-generating component. 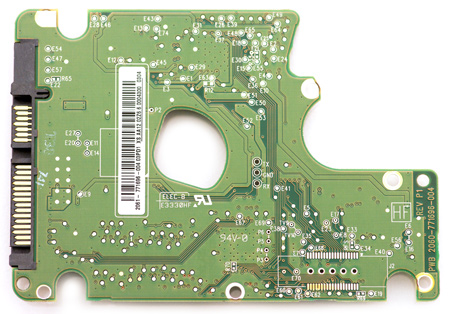 Compared to your standard 3.5” desktop drive the VelociRaptor has one key advantage; spindle speed. The Velociraptor is a 10,000RPM enterprise drive at its heart which allows the drive to access data quicker than a 5,400 or 7,200PM drive. The faster rotational speed also allows much quicker access times. 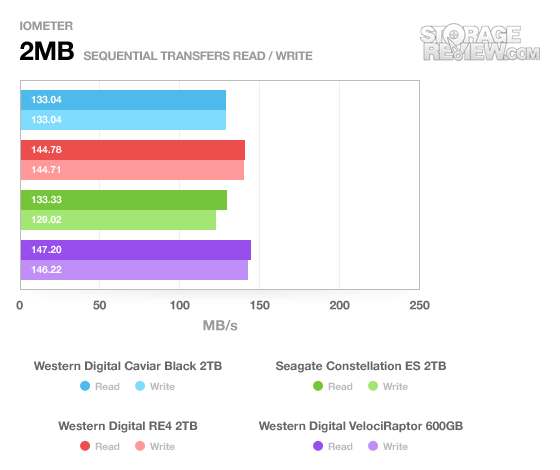 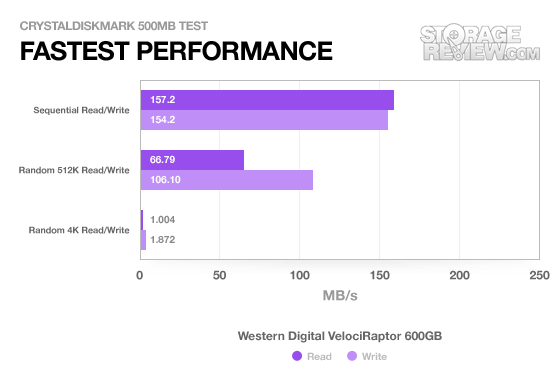 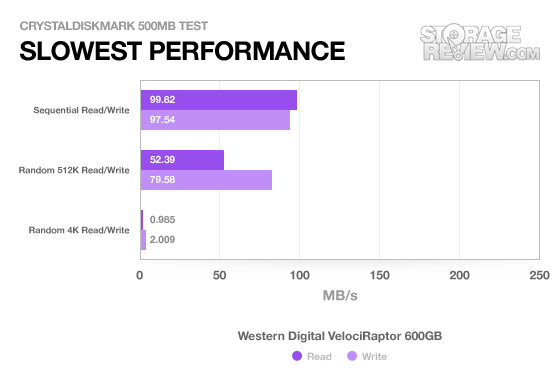 In our tests we found the 600GB VelociRaptor to have sequential read and write speeds of 147MB/s and 146MB/s respectively. Note that the Western Digital RE4 is right on its tail, trailing behind by 2MB/s. Sequential file transfers is not exactly the strength of this drive though as you will clearly see in our next test. Switching to a 2M random transfer test we see the VelociRaptor gain speed compared to the other high-performance 7,200RPM 3.5” drives. It clocks in with over 82MB/s read and 80MB/s write speeds. The closest drive now is more than 18MB/s behind. In the smaller 4K random transfer test the VelociRaptor takes an even larger lead compared to its slower RPM counterparts. It has just less than double the MB/s transfer speed and IOPs than the competing 7,200RPM drives. In nearly every one of our IOMeter server tests the 600GB VelociRaptor showed almost double the I/O performance of the other competing SATA hard disk drives. Now one of the biggest questions you might be asking yourself right now is “How does this translate into performance I might see in my own computer?” We have the answer for that in our custom StorageMark 2010 benchmark suite which plays back activity captured on average computers in real-world scenarios. Some might think low power consumption and 10,000RPM high-performance enterprise-class drive don’t belong in the same sentence, but with the VelociRaptor it is the case. Compared to 7,200RPM 3.5” consumer drives the VelociRaptor draws substantially less power in virtually every scenario. For a specific head-to-head comparison we chose the 2TB Caviar Black. In nearly every situation, including idle, the VelociRaptor draws on average two to four watts of power less than its larger sibling. For a desktop user power consumption isn’t one of the biggest concerns when choosing forms of storage. Instead of the focus is generally on heat output inside the computer chassis. In free-air sitting on a table top running tests with near-constant activity the VelociRaptor almost never went above 110F with room temperature measuring 76F.

Western Digital offers a five year warranty on the VelociRaptor which is currently matched by most competing hard drive manufacturers. Both standard and advanced replacement RMAs are offered, with the advanced replacement being free of charge with a credit card hold. This length of warranty is two years longer than what is offered with most SSDs, including the Western Digital SiliconEdge Blue.

The Western Digital VelociRaptor is the fastest SATA hard drive. Its 10,000RPM spindle speed gives it fast access times and high transfer speeds. Since we don’t live in a vacuum this also has to be compared to SSDs which are orders of magnitude faster than this drive in random access situations. The big argument for a fast hard disk these days is still price for capacity. SSDs still haven’t reached the point where you can go out and buy a 500GB+ drive without applying for a second mortgage. The VelociRaptor has to compete against another alternative though, a hybrid storage solution with frequently used applications on a smaller SSD and media and miscellaneous files going on a high capacity hard disk.

For the average consumer the VelociRaptor 600GB gives solid performance over 7,200RPM drives in daily situations, offers plenty of storage space for frequently used programs and media, and is affordable at just over $300. This drive also has the advantage of nearly unlimited data writes where SSDs still have a finite life even with wear-leveling.

The Western Digital 600GB VelociRaptor offers a great blend of performance and capacity, making it a perfect fit for those needing the fastest available hard drive performance via SATA interface, without the cost and longevity issues associated with high-capacity SSDs.