Last week Western Digital released the new 600GB VelociRaptor, which just like its predecessor, took the spot of fastest consumer hard disk drive. With the single hard drive not being able to keep up with average SSDs, we decided to take a look at multidrive performance. In this review we see how well the Western Digital VelociRaptor 600GB performs in RAID 0 and RAID 1 configurations using the 6Gb/s LSI MegaRAID 9260-8i controller card. The results are impressive.

Last week Western Digital released the new 600GB VelociRaptor, which just like its predecessor, took the spot of fastest consumer hard disk drive. With the single hard drive not being able to keep up with average SSDs, we decided to take a look at multidrive performance. In this review we see how well the Western Digital VelociRaptor 600GB performs in RAID 0 and RAID 1 configurations using the 6Gb/s LSI MegaRAID 9260-8i controller card. The results are impressive. 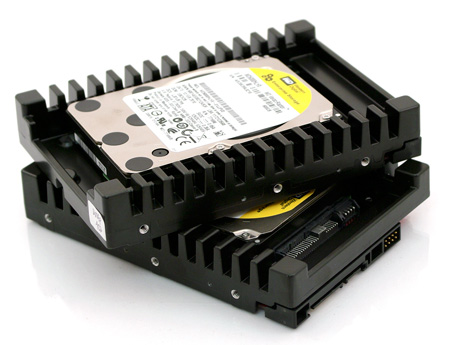 To get caught up on what the latest VelociRaptor has to offer, check out our Western Digital VelociRaptor Review (600GB WD6000HLHX). For the purposes of this two-drive RAID test we’ll get straight to the benchmarks, except to say that aesthetically, two 600GB VelociRaptors look more than twice as good as one. Will the RAID performance match the visual performance though? 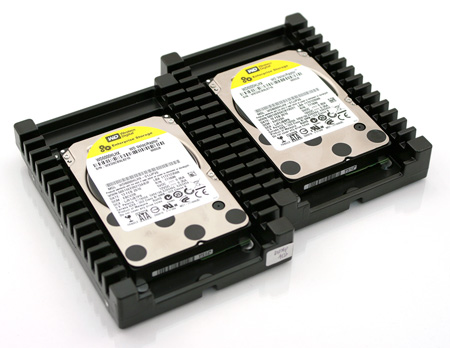 Both RAID 0 and RAID 1 setups have a stripe size of 64KB, write-back always, always read ahead, direct I/O, and disk cache enabled. 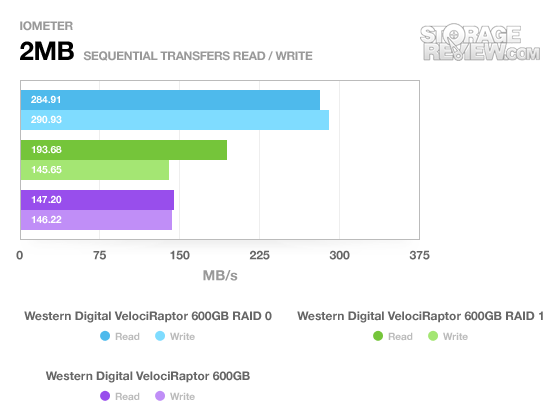 Our 500MB CrystalDiskMark test produced inaccurate results when testing the RAID 0 and RAID 1 configurations, and was left out of this review. The test worked with files that were less than the size of the LSI RAID controller’s cache (512MB) and as a result gave us inflated results. In some runs we were close to pushing 1000 MB/s in both the sequential and 512K tests. Since IOMeter and our custom StorageMark 2010 benchmarks work with much larger sample sizes they were unaffected.

In the 2MB random transfer test both RAID 0 and RAID 1 configurations had a significant lead on the single VelociRaptor. In fact the write speed of the RAID 0 configuration actually came close to matching the random write speed we saw from the 256GB WD SiliconEdge Blue SSD. 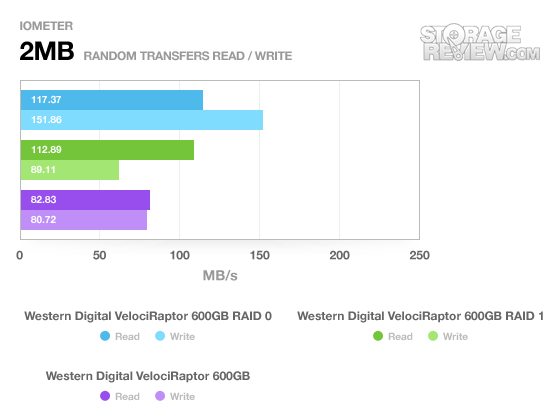 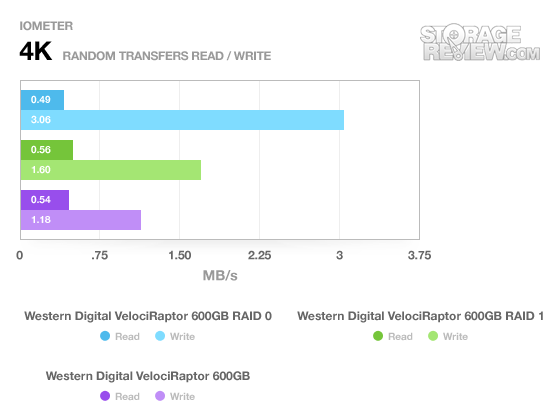 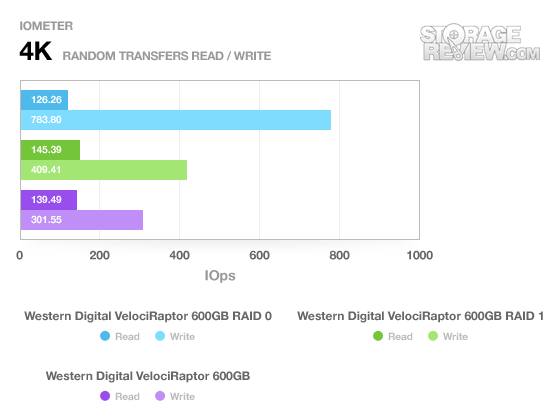 Write latency also saw significant drops when the VelociRaptors were in RAID configuration when compared to a single drive. The 10,000RPM drive by itself saw average access times of 3.3ms, but when running in RAID 0, it dropped down to 1.27ms. Note that this is still well over the 0.25ms seen with the WD SiliconEdge Blue or 0.09ms with the Intel X25-M. 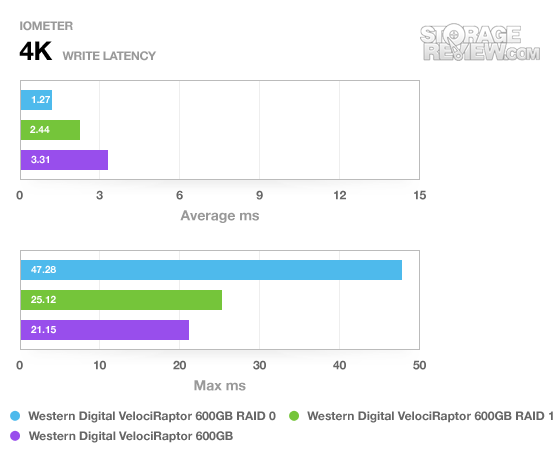 IOMeter server performance had a modest boost in IO-speed, especially as the simultaneous transfer requests increased. Some of this bump in speed may have also been the result of flowing through our 6Gb/s RAID card instead of the 3Gb/s ICH10R SATA controller inside our test bench. 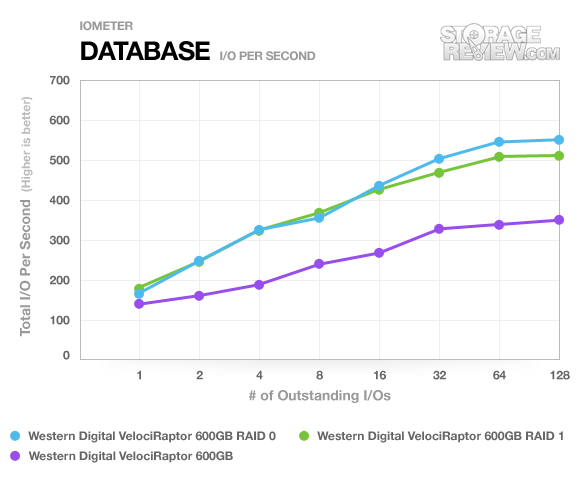 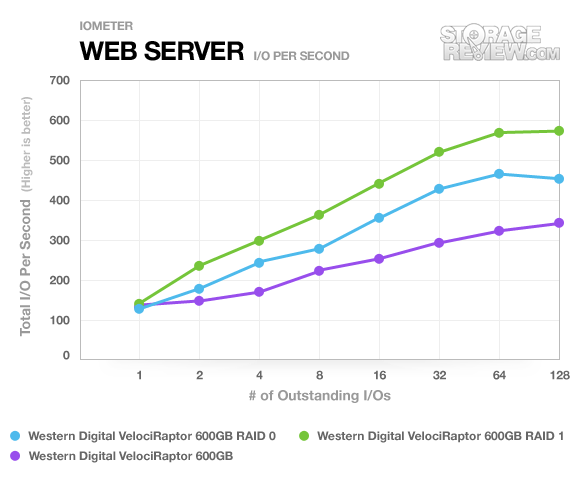 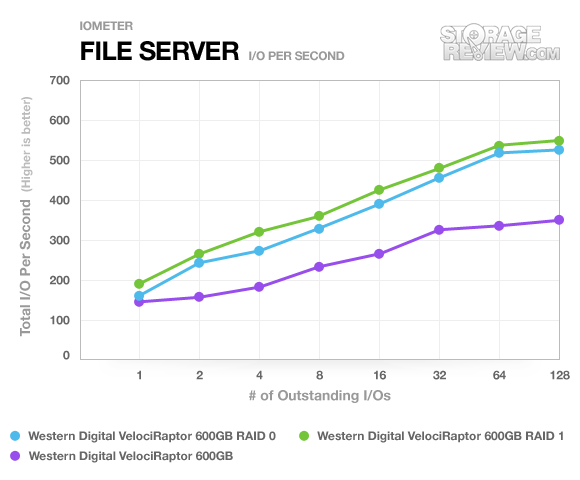 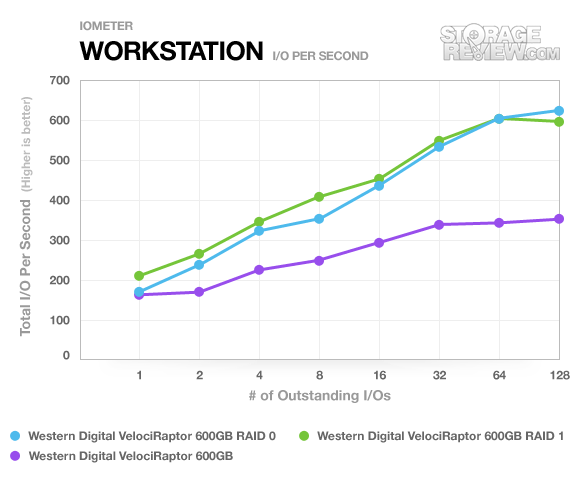 Real-world performance is where the VelociRaptor in RAID really showed its strengths. This section also shows how some of our faster hard disk drives start to show performance in line with some of the similarly priced SSDs. 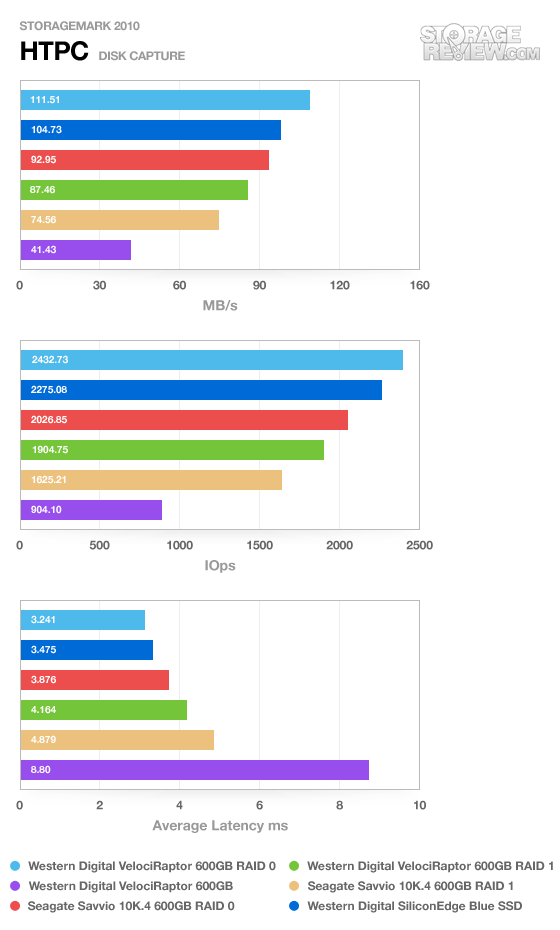 Our second real-world test is a productivity scenario. For all intents and purposes this test shows drive performance under normal daily activity for most users. This test includes: a three hour period operating in an office productivity environment with 32-bit Vista running Outlook 2007 connected to an Exchange server, web browsing using Chrome and IE8, editing files within Office 2007, viewing PDFs in Adobe Reader, and an hour of local music playback with two hours of additional online music via Pandora. 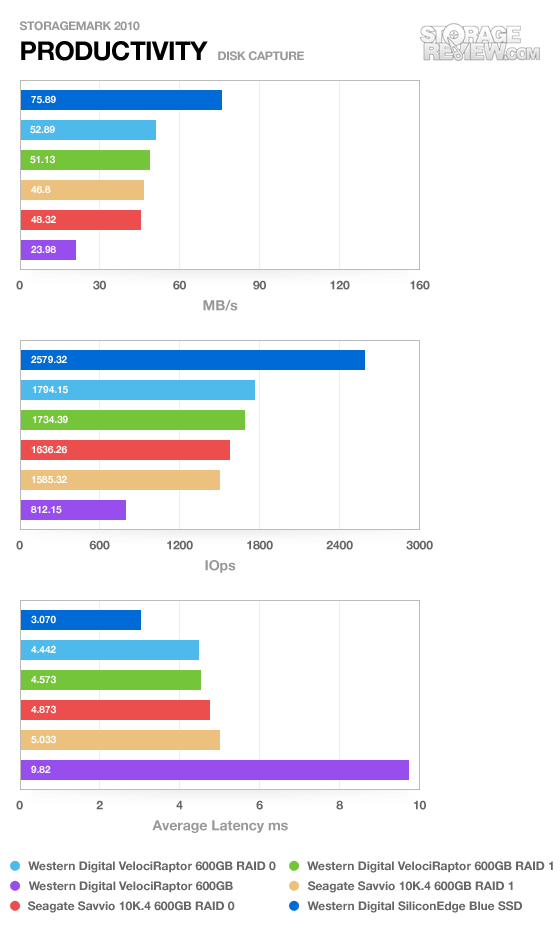 In this test performance of the VelociRaptors in RAID was double compared to running the drive by itself. Unlike the HTPC-scenario there was negligible difference between RAID 0 and RAID 1. When compared to the SiliconEdge Blue SSD the RAID VelociRaptors were roughly 30% slower, but much faster than the single VelociRaptor which was about 70% slower. The SSD still has the advantage with its quick access times.

If there is one thing to take away from this article, it’s that hard disk drives still have a very useful purpose in consumer desktop systems, even when performance is of primary importance. With our RAID 0 and RAID 1 VelociRaptor configurations, users get very close to the performance of mid-range SSDs, for less cost when you try to match capacities.

Going by current market prices of $799 for a WD 256GB SSD and $279 for a 600GB VelociRaptor; users spend either $3.12 per GB for the SSD or $0.67 per GB in RAID 0 and $1.08 per GB in RAID 1 with the VelociRaptor. The difference in price also lets you pick up a RAID card if you don’t already own one and you still walk away with two or four times the storage capacity.

Beyond the capacity gain, the hard drive performance also won’t have any wear-leveling concerns down the road or small performance hits as the drive gets used.

With that said, you still have slightly slower synthetic access times and increased power consumption in the VelociRaptor RAID configurations when compared to SSDs. In the real-world though, a few more watts of power doesn’t play a big role in your utility bill and as our StorageMark tests have shown average latency is similar in some cases.

Yes faster SSDs than the Western Digital SiliconEdge Blue exist, but to get that level of performance in 600GB or 1200GB capacities, you would be paying a small fortune. Getting close to just 600GB from the Western Digital SSD would run you $1,600 and about $2,000 with the Intel X25-M – double that if you want to get to 1,200GB.

If you want affordable high-capacity storage with the performance of a mid-range SSD and no long-term speed degradation, twin 600GB Western Digital VelociRaptors in RAID 0 or RAID 1 are a great way to go.