MarkLogic 6 is an Enterprise NoSQL (“Not Only SQL”) database that has the flexibility and scalability to handle today’s data challenges that SQL-based databases were not designed to handle. It also has enterprise-grade capabilities like search, ACID transactions, failover, replication, and security to run mission-critical applications. MarkLogic combines database functionality, search, and application services in a single system. It provides the functionality enterprises need to deliver value. MarkLogic leverages existing tools, knowledge, and experience while providing a reliable, scalable, and secure platform for mission-critical data.

The benchmark we are utilizing is internally developed by MarkLogic and is used to evaluate both hardware configurations and upcoming MarkLogic software releases. The workload is divided into two distinct parts:

The corpus used is the publicly available Wikipedia xml collection. Files are held on disk in zipped format. For ingestion we use MarkLogic Content Pump (mlcp).

The ingestion phase in particular is I/O intensive. I/O is broken down into three categories:

To ensure the highest level of accuracy and to force each device into steady-state, we repeat the ingestion and query phases 24 times for flash-based devices. For PCIe Application Accelerators, each interval takes between 60-120 minutes to complete, thus putting the total test time into a range of 24-48 hours. For devices with lower I/O throughput, the total test time can span days. Our focus in this test is to look at overall latency from each storage solution across four areas of interest: journal writes (J-lat), save writes (S-lat), as well as merge read (MR-lat) and merge write latency (MW-lat). 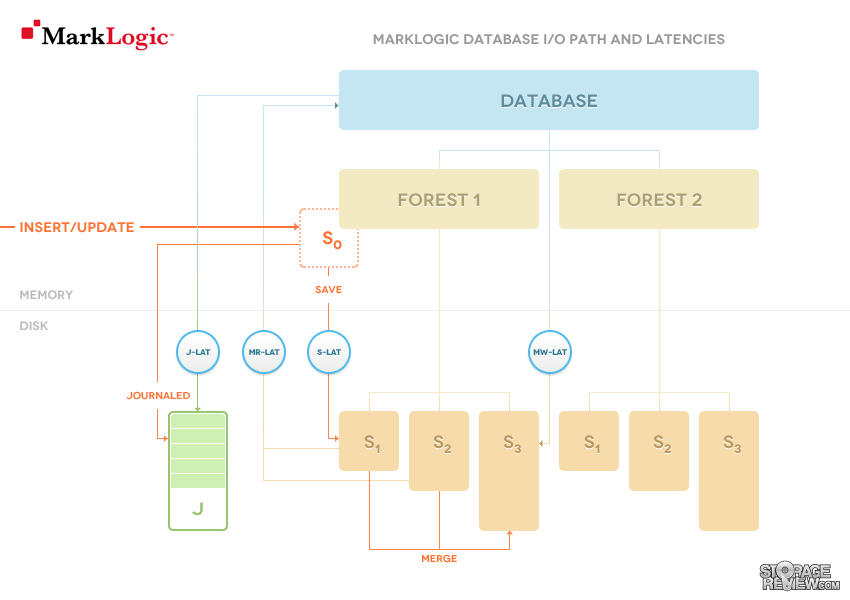 In the diagram above we see the I/O paths and latencies in MarkLogic:

During ingestion, MarkLogic also indexes all of the documents, creates term lists, etc. This activity requires CPU cycles which make the benchmark a good balance between high I/O and high CPU utilization.

The Wikipedia data was also chosen because it contains non-English and non-ASCII text of which we use: Arabic, Dutch, French, German, Italian, Japanese, Korean, Persian, Portuguese, Russian, Spanish, Simplified Chinese and Traditional Chinese. These options stress the multilingual features of MarkLogic. Finally, the static data ingested makes the benchmark repeatable which is essential for performance comparisons across multiple software versions’ varying hardware configurations.

Storage solutions are tested with the MarkLogic NoSQL benchmark in the StorageReview Enterprise Test Lab utilizing multiple servers connected over a high-speed network. We utilize servers from EchoStreams and Lenovo for different segments of the MarkLogic NoSQL Testing Environment, and for the fabric that connects the equipment, we use Mellanox InfiniBand Switching and NICs.

The storage solution is broken up into three sections: the storage host, the MarkLogic NoSQL Database Cluster, and the MarkLogic Database Client. For the storage host, we use a 2U Lenovo ThinkServer RD630 to present PCIe Application Accelerators, groups of four SATA/SAS SSDs, and a host for NAS/SAN equipment to present them on the InfiniBand fabric. For the MarkLogic Database Cluster, we use an EchoStreams GridStreams quad-node server equipped with eight Intel Xeon E5-2640 CPUs to provide the compute resources needed to effectively stress the fastest storage devices. On the client side, we use 1U Lenovo ThinkServer RD530 servers that provide the working data that are loaded into system memory and pushed to the NoSQL Database cluster over our high-speed network. Linking all of these servers together is a Mellanox 56Gb/s InfiniBand fabric including both switch and NICs that give us the highest transfer speeds and lowest latency to not limit the performance of high-performance storage devices.

Mellanox InfiniBand interconnects were used to provide the highest performance and greatest network efficiency to ensure that the devices connected are not network-limited. Looking at just PCIe storage solutions, a single PCIe Application Accelerator can easily drive more 1-3GB/s onto the network. Ramp up to an all-flash storage appliance with peak transfer speeds in excess of 10-20GB/s and you can quickly see how network link capacity can be easily saturated, limiting the overall performance of the entire platform. InfiniBand’s high-bandwidth links allow for the greatest amount of data to be moved over the least number of links, allowing for the full system capabilities to be realized.

The main goal with this platform is highlighting how enterprise storage performs in an actual enterprise environment and workload, instead of relying on synthetic or pseudo-synthetic workloads. Synthetic workload generators are great at showing how well storage devices perform with a continuous synthetic I/O pattern, but they don't take into consideration any of the other outside variables that show how devices actually work in production environments. Synthetic workload generators have the benefit of showing a clean I/O pattern time and time again, but will never replicate a true production environment. Introducing application performance on top of storage products begins to show how well the storage interacts with its drivers, the local operating system, the application being tested, the network stack, the networking switching, and external servers. These are variables that a synthetic workload generator simply can't take into account, and are also an order of magnitude more resource and infrastructure intensive in terms of the equipment required to execute this particular benchmark.

We test a wide range of storage solutions with the MarkLogic NoSQL benchmark that meet the minimum requirements of the testing environment. To qualify for testing, the storage device must have a usable capacity exceeding 650GB and be geared towards operating under stressful enterprise conditions. This includes new PCIe Application Accelerators, groups of four SAS or SATA enterprise SSDs, as well as large HDD arrays that are locally or network attached. Listed below are the overall latency figures captured from all devices tested to date in this test. In product reviews we dive into greater detail and put competing products head to head while our main list shows the stratification of different storage solutions.