Blackmagic Design has announced a range of new Blackmagic Cloud Store devices. These are high-performance network storage solutions meant for high-end television and film industry environments, specifically with large 4K media file sharing, editing, and recording. The new Cloud Store line looks extremely impressive with its bevy of M.2 drive slots, 10GbE connectivity on the back end and other interesting functionality, so let’s get right into these releases.

Blackmagic Design has announced a range of new Blackmagic Cloud Store devices. These are high-performance network storage solutions meant for high-end television and film industry environments, specifically with large 4K media file sharing, editing, and recording. The new Cloud Store line looks extremely impressive with its bevy of M.2 drive slots, 10GbE connectivity on the back end and other interesting functionality, so let’s get right into these releases. 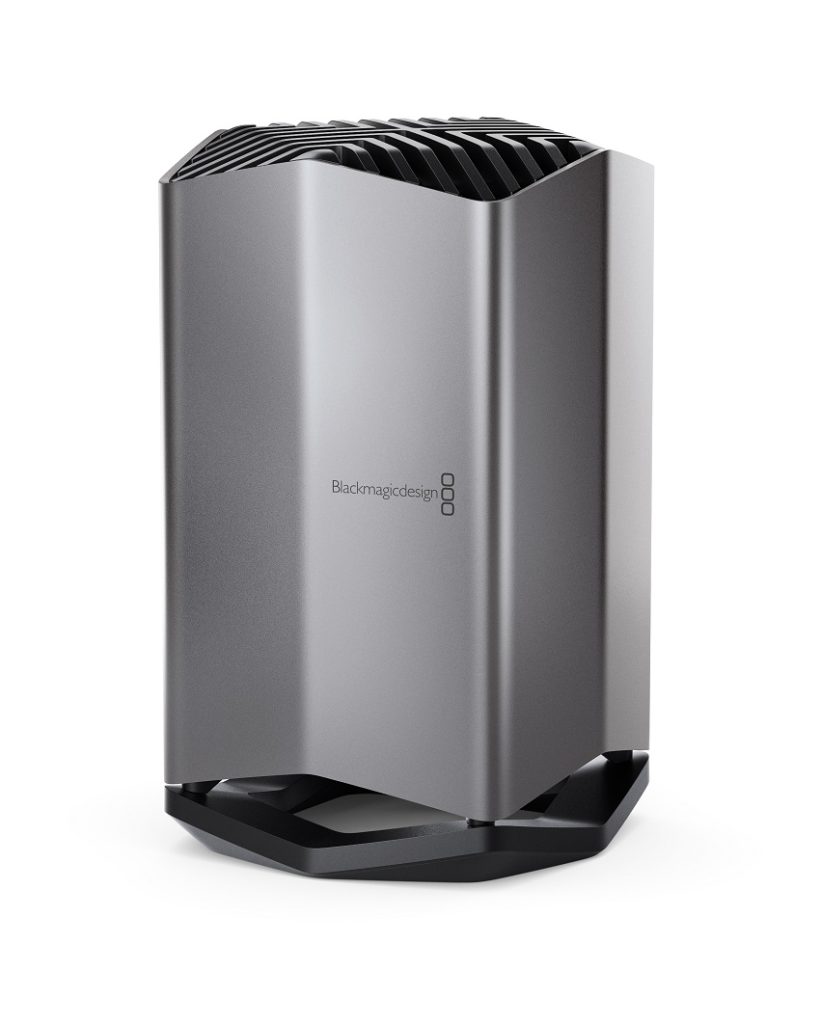 While Blackmagic says its Cloud Store is an ideal storage solution for pretty much any use case, it is specifically designed for television and high-end film industry applications where large media files need to be shared between multiple users for editing, color correction, audio post and VFX work. It can even work well with large 12K Blackmagic RAW digital cinema files.

The Blackmagic Cloud Store sports a vertical, portable built and is very quiet, which means it can be used on location. Under the hood, it features a range of flash memory cards working in parallel for speed and data protection. Moreover, its four 10G Ethernet ports operate as a switch, allowing users to connect four separate computers, or work together using “link aggregation” for 40G Ethernet speeds.

The Cloud Store also features an HDMI monitoring output so users can watch a live graphic view of the storage operating on a display. This storage map shows a graphic representation of the memory core and the read and write activity of connected users. 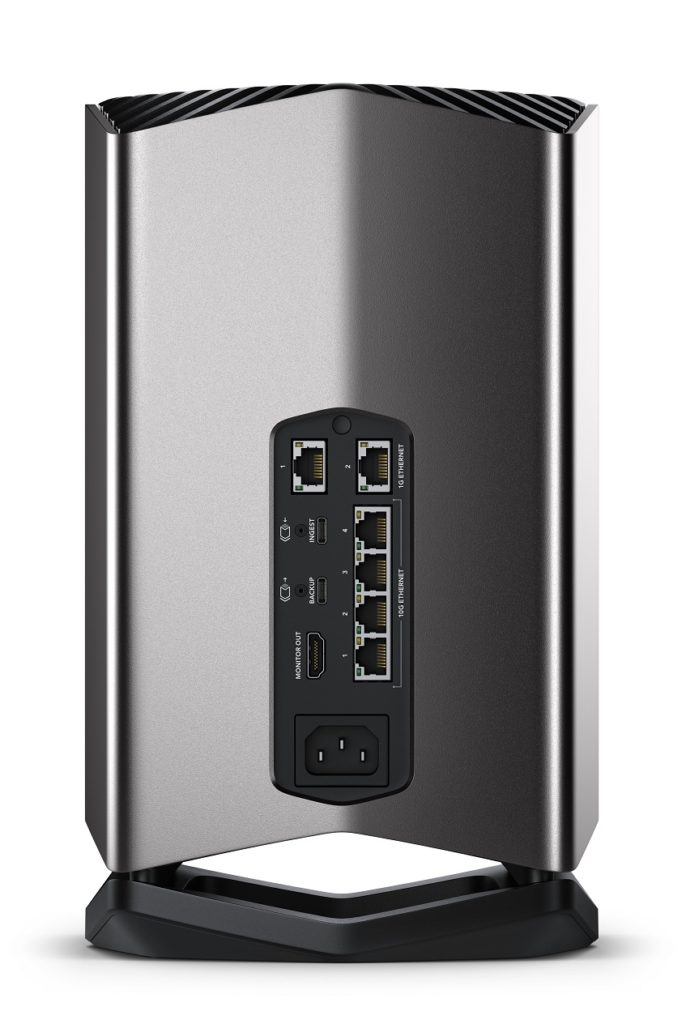 On the back panel image above, you can see that it features a power port, USB-C backup port (which will automatically back up cloud store files to any USB disk plugged into this port), USB-C ingest port (which will automatically load from any disk plugged into this port), HDMI monitor output port, a 1GbE port, and four 10GbE ports.

The Blackmagic Cloud Store is available in capacity models of 20TB, 80TB and a massive 320TB, allowing it to satisfy pretty much any storage need. In addition, the M.2 drives are arranged in parallel RAID 5 groups, which means that performance is much faster compared to a single card. Users can also now set up a local cache of their Dropbox files.

It is equipped with a built-in USB-C to Ethernet adapter, which will allow users to easily access the device and quickly get the files they need by connecting their computer directly to the Blackmagic Cloud Store.

The Blackmagic Cloud Store is a private storage solution that users have full control over. There are no subscriptions or monthly license fees, and Blackmagic does not track usage or any other type of data. Users will be able to run a completely private network disconnected from the Internet.

The Blackmagic Cloud Store will be available sometime in Q2 2022 starting at $9,595.

The Blackmagic Cloud Store Mini is essentially a much more compact version of the Cloud Store from above and has the same features and functionality (privacy, DropBox functionality, HDMI output, silent operation etc.) as the large version. Other than its size, the only differences relate to storage and rear connectivity: it features four M.2 slots in a RAID0 configuration for a total of 8TB in capacity.

The Mini is ideal for film and television use cases where large media files need to be shared among multiple users for editing, color correction, audio post and VFX work. It also can work well with larger 12K Blackmagic RAW digital cinema files like its full-sized brother.

The back panel features a power port, one 10GbE port, one 1GbE port, a USB-C connection port (which supports Ethernet for connecting to access files via the built-in USB-C to Ethernet adapter) and the HDMI monitor output port)

The Blackmagic Cloud Store Mini is available now for $2,995.

Going even smaller is the Blackmagic Cloud Pod, which allows users to build their own network storage using USB-C flash disks they already own by simply plugging them into the system. Like the other Cloud productions, it includes high-speed 10G Ethernet and Dropbox sync, allowing users to cache files locally and share them with everyone on their network. Like the larger models, the Cloud Pod includes an HDMI monitoring output for real-time analytics of network storage. 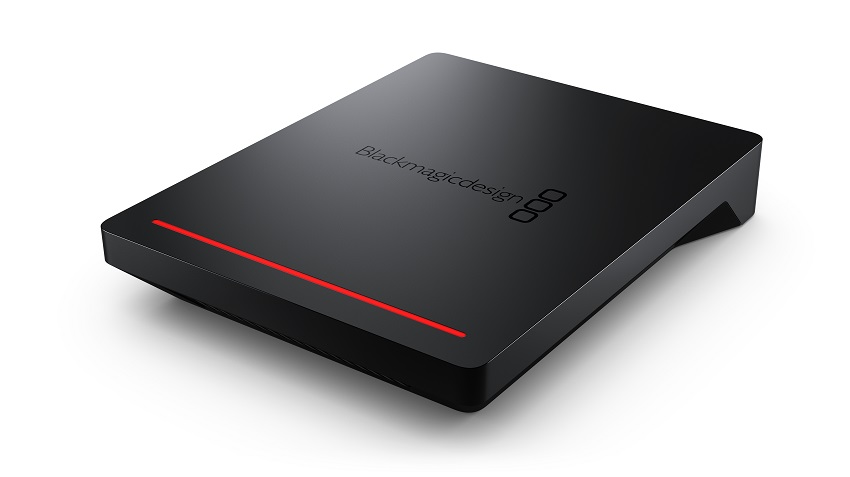 Blackmagic Cloud is able to have such a small form factor because it doesn’t have any internal storage itself. This makes it extremely quiet and portable. Its dual USB-C ports allow it to host two separate USB disks on a network at the same time, while the 10G Ethernet port means extremely high performance. Like the other two models, it comes equipped with an HDMI monitoring output.

On the back, it features one 10GbE port, two USB-C ports (which allow users to host two disks on each Pod), and the HDMI monitor output port.

The Blackmagic Cloud Pod utility (available on Mac and Windows) allows users to change the network settings of the device. It’s very easy to use, as no IT needs to be involved.

The Blackmagic Cloud Pod is available now for $395.

Next up is the HyperDeck Extreme 4K HDR. This is a slick-looking, all-new broadcast deck highlighted by advanced H.265 4K recording and a touch-screen GUI and built-in scopes. It also features new innovations like space-saving H.265 files, optional internal cache, 3D LUTs and HDR support.

The ability to record 4K in the H.265 format means users will be able to reduce their storage costs while keeping superior image quality. These file types are extremely small (ranging from 60:1 to 285:1 compression ratios) and are now supported on all major operating systems. HyperDeck also supports Apple ProRes 422 HQ, ProRes 422, ProRes 422 LT for recording and playback as well as ProRes 4444 for playback to fill and key out. Blackmagic indicates that it supports software like DaVinci Resolve, Media Composer, Premiere Pro or Final Cut Pro X.

Customers can also add HyperDeck Extreme Control. This will transform it into a traditional broadcast deck, making it an ideal solution for the next generation of broadcast, live production and digital signage.

The impressive-looking touch LCD GUI screen gives users comprehensive control over the new HyperDeck. It has three dedicated buttons for play, stop and record, as well as a mini timeline for scrolling through recordings. The LCD also includes a heads-up display of timecode, video standard, media status and audio meters. Scopes, focus and exposure assist are all enabled through the touch screen as well. In addition to the other extensive range of settings controlled by the touch screen, users can also load and save 3D LUTs. 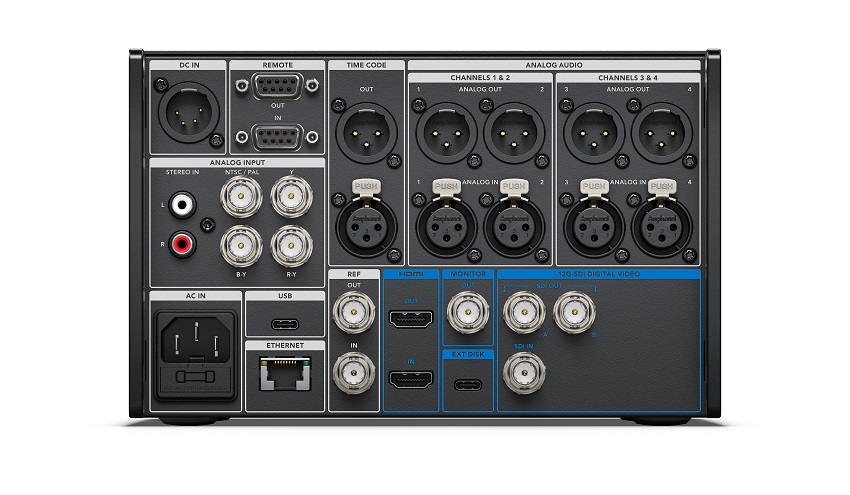 As you can see above, there is a comprehensive set of connectivity and functionality on the back panel, including analog video and audio ports, timecode ports, 10GbE support, dual HDMI ports, external disk ports and Quad 12G-SDI.

CFast media is also supported, and coupled with the H.265 file support, this will allow long recordings on these memory cards. There are dual CFast card slots on the HyperDeck so users can easily swap out any full cards (even during recording sessions). This means users can essentially record for as long as they want without interruption.

PCIe flash drives can be installed on the HyperDeck Extreme as a record cache, which will automatically take over and record any content the CFast media or external disks could not capture. When a memory card is full, the recording will still continue to the cache until the disk has been swapped.

Blackmagic also offers an 8K version of the HyperDeck Extreme.